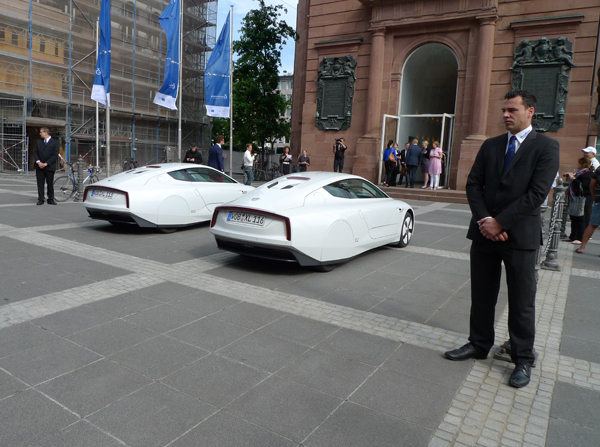 The speakers are driven up with the VW XL1 at the Paulskirche in Frankfurt. Photo © Thomas Edelmann

You would need the memory of an elephant to understand what is meant by the above. The “Second German Design Debate” – the only people to whom this title means anything at all are those who have been interested in design, design promotion, and/or the “German Design Council” for more than a decade. Even people who do fulfil these criteria would need to remember or at least not erased from their memories the fact that ten years ago the “First German Design Debate” was held in the same place.

Back then, the celebrations were held in the same location with its long-standing tradition in terms of parliamentary democracy in Germany, the place where, in 1848-9, the first democratically elected parliament assembled. With an official figure of 600, this time one third fewer visitors came than ten years ago. In 2003, this design promotion institution’s 50th anniversary, the Paulskirche was filled to bursting point. There was little air but the mood was reasonably optimistic. From a purely male viewpoint, the event looked at the past, present and future of the design promotion scene, at the time, as seen by Rolf Fehlbaum, Dieter Rams, Erik Spiekermann, Peter Schreyer, Herbert H. Schultes, Konstantin Grcic and Bazon Brock.

In 2003, the competition on the design market had only just started hotting up. Design institutions were discovering that, faced with tight public budgets, it was better not to wait for state financing and instead raise the necessary cash from trade and industry. Apart from high days, on which appealing to values and traditions might stand some chance, this usually means, unfortunately, that content suffers. With design, as with other cultural activities, content is always a question of form; however, without it being possible to reduce the matter to formal or stylistic debates. Here, again, demand is governed as follows: the industry only supplies what has been ordered and paid for in advance. Without any more to-do, as they put it locally.

Today, in 2013, it was noticeable that, even more than the experts it was the speakers from the ministries and the world of politics who all wanted to talk about the good old days. Hans-Joachim Otto, Parliamentary State Secretary from the Federal Ministry of Economics and Technology, somebody not popular with the Council, put it in a nutshell: In his opinion, the German Design Council is the only design council in the world where the business community is in the majority. Nevertheless, Otto has somehow managed to move the “Design Prize of the Federal Republic” out of the Council and locate it elsewhere, but that is another story altogether and not one suitable for an anniversary.

In the depths of the past, at a time which practically nobody alive today can remember, it was the German Bundestag’s culture committee that was instrumental in establishing the “German Design Council”. Seemingly, in the past, there were politicians who considered design relevant. Many of them were closely involved with the German “Werkbund”. And today? The Werkbund is among the living dead corpse. Politicians, architects (such as Schwippert, Bartning and Eiermann) have all held the reins at the Council as have people such as Günther Freiherr von Pechmann, who established Die Neue Sammlung in Munich back in 1926, who was one of the makers of the “German Design Council”.

At the heart of the “Second German Design Debate” were the statements by the invited speakers. Very much in line with Bazon Brock’s advice to the Europeans – “get yourselves some museums” – this time, three museum-makers ruled the roost. Annemarie Jaeggi, Director of the Bauhaus Archive in Berlin, Martin Roth, Director of the Victoria & Albert Museum in London, and Paola Antonelli, a curator at the Museum of Modern Art in New York. The agenda turned out not to be particularly felicitous. The impudent, sometimes self-depreciating, sometimes self-satisfied Erik Spiekermann (whose speech was very nuanced) was followed by a rather dry lecture by Annemarie Jaeggi on the history of the Bauhaus Archive thru 2019, which will mark the 100th anniversary of the establishment of that renowned school of art and design. At least she did not suggest copying the Bauhaus. After this, Stefan Sielaff, a car designer, who even had the foresight to bring two steering wheels with him, took a turn in another direction. He asserted that design is a tool for brand differentiation. It was only the next three lecturers who succeeded in initiating something resembling a debate with their speeches, some of which were extempore and others critically formulated.

Martin Roth, who was introduced as “our man in London”, was able both elegantly and toughly to refute these arguments. Yet Roth also claimed that London was “the sovereign state in terms of design”. In his plea for a national design museum he used the example of Prince Albert to demonstrate that more is required to make a project of that kind fly than just collecting money. He talked about “acting on ideas” and about “proactive persons” – as Prince Albert was in the case of the V&A –and about a mood of “mutual challenges” and, as a goal, projects that really are relevant to the public. Roth argued in favour of shoring up local strengths in Europe together instead of increasingly drawing national borders. As he saw it, a new stringency and openness in the definition of the term “design” is needed.

Towards the end, Stefan Diez offered a talk which slightly dampened the fire of these ceremonial, anniversary speeches but was nonetheless capable of opening up some kind of extra-parliamentary debate. Paola Antonelli reminded the audience of the Hippocratic oath taken by all designers, the purpose of whose work should be to serve the world, even when they express criticism of the status quo by producing dystopian objects.

“I was deeply moved,” opined moderator and GDC General Manager Andrej Kupetz at the end and referred to what he regarded as the “scintillating ideas” voiced. The fact that, in all the excitement, the announced second appearance of composer Christian Naujok unfortunately failed to happen was only noted with regret by some members of the audience.

However, before this, a minor sensation went almost unnoticed. President Peter Pfeiffer had spoken right at the beginning about “our project Future”. He explained that in future one of the “German Design Council’s central communications functions will be to impart the cultural value of our products to consumers”. Also, the project of “at least one national design museum as a place for getting to grips with the cultural dimension of design” is being revived. Was this ever more than a PR idea? There are enough design museums and collections in Germany, as well as splendid collection such as Institut für Neue Technische Form (the Institute of new technical shape). What is lacking is money, ideas, people of action, relevance – read what Roth has to say on the subject.

In his opinion, design is business promotion and contributes to brand differentiation. This has been the mantra of German design promoters over the past decades. Completely out of keeping with his times, as long ago as 2003, Konstantin Grcic noted at the speaker’s lectern in the Paulskirche that the “institutions and associations, not only the German Design Council, but it as well, have slightly frivolously given away their cultural mandate and placed it in the hands of business”, adding that culture is, after all, “much more difficult to pin down, not so blatant.” What happens next remains to be seen.

The speakers are driven up with the VW XL1 at the Paulskirche in Frankfurt. Photo © Thomas Edelmann 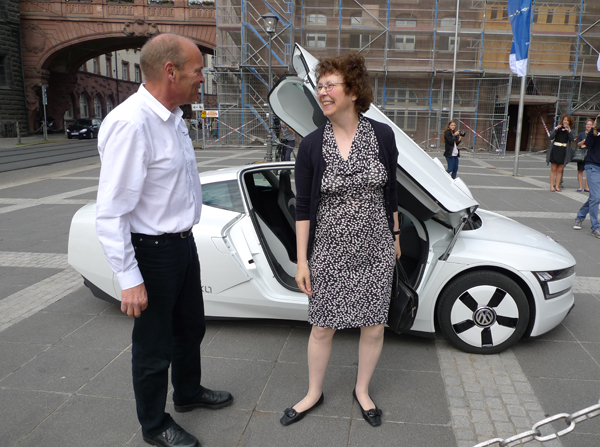 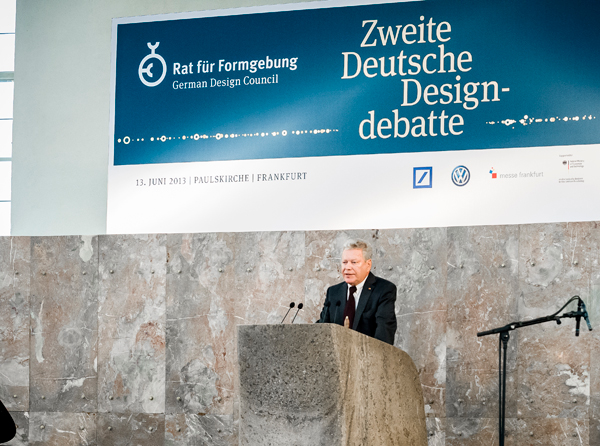 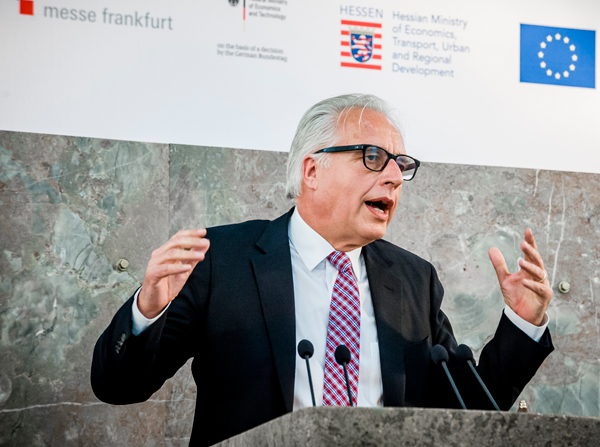 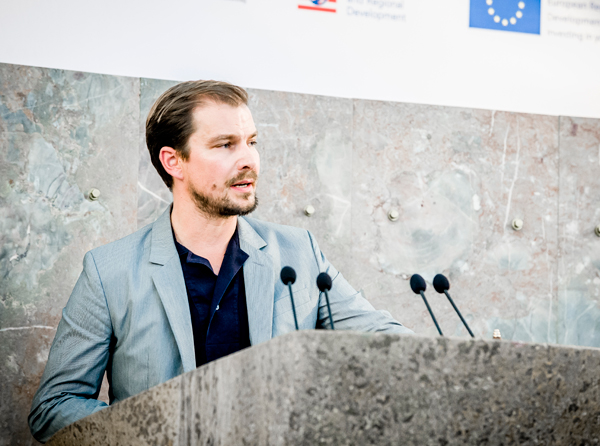 Product designer Stefan Diez holds a speech about the position of design in Germany and Europe. Photo © Ulrich Schepp 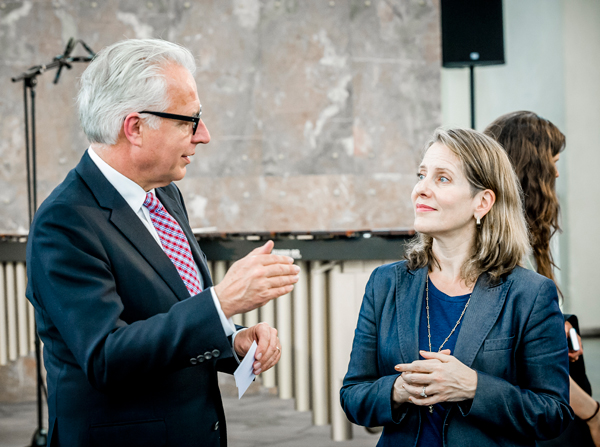 Prof. Dr. Martin Roth, director of the Victoria & Albert Museum in London, and Paola Antonelli, senior curator at the Museum of Modern Art in New York, in a conversation after the event. Photo © Ulrich Schepp 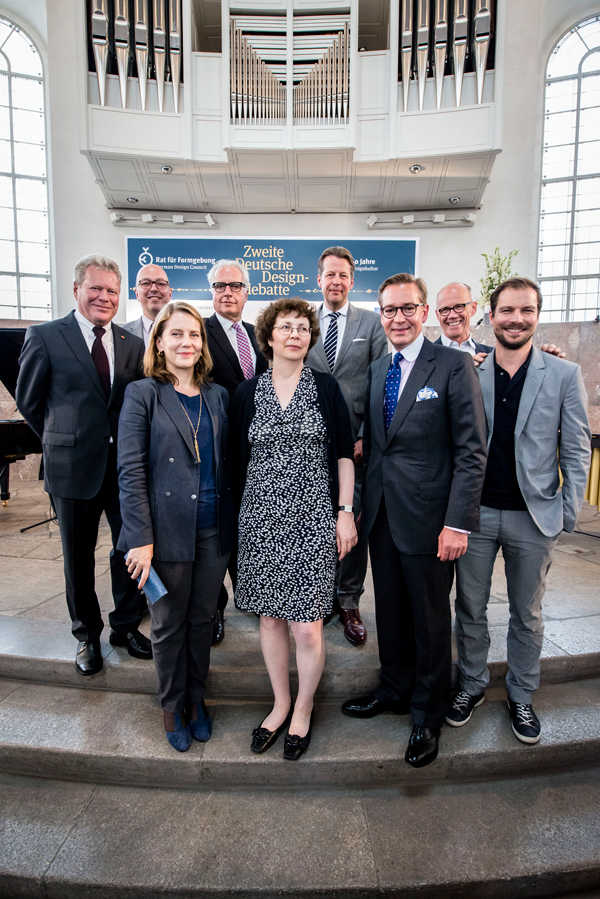 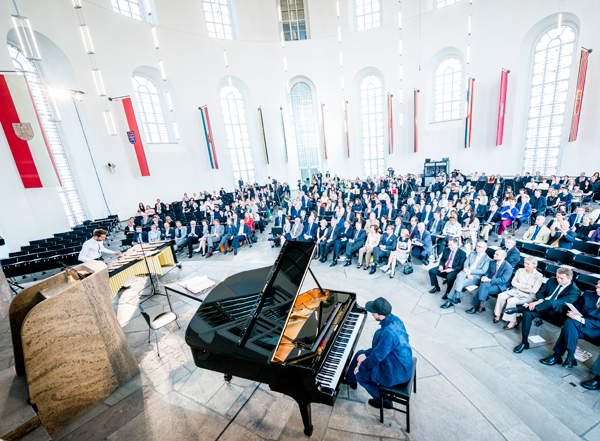