top
Designer and Manufacturer are like Mother and Father
by Nancy Jehmlich | Nov 22, 2008 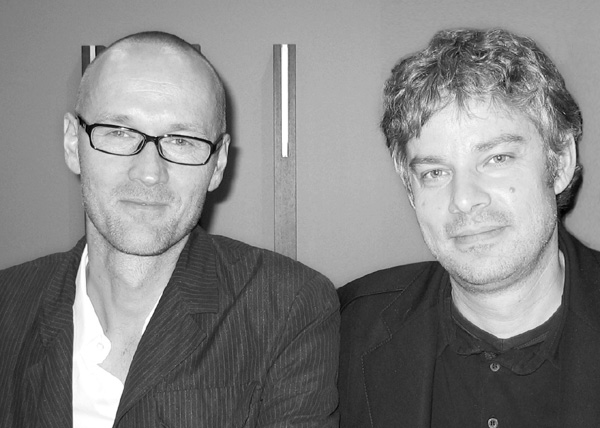 The designers Markus Jehs and Jürgen Laub have been working together under the name Jehs+Laub for over 14 years now. We met them at Orgatec in Cologne, and spoke to them about their relationship with manufacturers, the quality of entrances, trends, sustainability, and the strengths and weaknesses of the other.

Have you had a look around Orgatec and discovered anything?
Markus Jehs: At the Wilkhahn stand there is an interesting chair by Stefan Diez.
Jürgen Laub: As always Walter Knoll has some top-quality and comfortable high-end furniture. In general one can say that there is certainly quality here waiting to be discovered.

You place value on a good relationship between manufacturers and designers. To what extent do the two parties influence each other?
Jehs: It's like mother and father.
And who is the father?
Both: The designer of course!
Laub: And the manufacturer is the mother. She is the one that has to incubate and develop, and then ultimately the child they have created together arrives.

So would you say that they are two partners with equal rights?
Jehs: Yes, that's the way it should be.
Laub: We would like to try and offer the same design to several manufacturers, but of course we can't, and shouldn't. But it certainly would be fun to see at a fair just how differently the products had turned out. Evan within a company a design changes during the course of the development process, unless, that is, you know exactly what the client wants and what it can produce. As a rule, however, a product develops and changes in the process - and that's how it should be.

To what degree do you go cater to a manufacturer's peculiarities?
Jehs: Let's take, for example, the Danish company Fritz Hansen. They approached us and asked whether we could imagine working together with them. Initially the designer at Fritz Hansen came to us and spent hours telling us about the company's history. Afterwards we addressed Danish design and asked ourselves what it means to us. Where does Fritz Hansen come from? What makes Fritz Hansen different? What could the company's future be? Where is the red thread we have to keep on spinning? Then of course we have to see if the company's stance, philosophy suits our own stance. Is the chemistry right between you and the people you'll be working? And if so, can we work together.
Laub: The main reason for us wanting to work with a company like Schönbuch was the cloakroom section they serve. At first you think it's a niche market, and actually it is, but basically it's about the design of the reception area. This is where you first come into contact with a building and its users, regardless of whether it's a private residence or a public building. The entrance, in other words the place where you are received, is extremely important. In public buildings these zones are often lounge areas and are first and foremost intended to reflect a certain standard. It's the same with the cloakroom as well, the hall, the corridor. We thought that was very interesting. If you approach the assignment in this way, you can design more than a clothes hangar. You have to think of the space and the person that moves, lingers, and operates in it. As such we went about this project with a holistic approach and designed the "Stripes" cloakroom system.

How do you deal with the topic of sustainability?
Jehs: It's a very important topic. Not least of all because of our wives, who place great importance on the fact that we don't produce any old stuff and our children have to dispose of the waste later on.
Laub: I see, you just want to please your wife.
Jehs: Yes, exactly.
Laub: Sustainability is for us primarily a design aspect because we believe that if we design products that have a long life we achieve a high degree of sustainability. The whole discussion about recycling is actually always a discussion that tends towards recycling but not towards waste. An existing product, however, first of all becomes waste, and only then is this waste recycled. We basically assume that something is going to be thrown away - or cannot be reused. For this reason we believe we need to weigh up whether we want to design a product with a short life or a long life. It could also be a glass fiber bowl. There can be hardly anything more sustainable than Charles Eames' fiber glass bowl.
Jehs: Exactly, nobody's going to throw that away.

Where do you see the future questions and tasks for design?
Jehs: I don't think that at the moment anyone can really say where design is going. It's like with the weather: too much is up to chance. Only short-term trends can be observed, like when working from home: work gadgets are getting ever smaller, so I can work sitting on the sofa, in the train, on a plane - and perhaps don't need an office any more.
Laub: Most trends a lot of people predict have already been round once. Fortunately there are mostly generations in between, such that no one notices when something is back in fashion. There are, however, inventions such as the Internet or perhaps the iPod - or events like the banking crisis (laughs) - that can fundamentally change something. What is interesting is that in the event of a war design actually becomes unimportant.
Jehs: Were everything is going is also relevant. Years ago I was in the Sahara and got more and more used to the way of life there. All you need is water and you sleep in the sand. And then you come home and ask yourself why on earth everyone is sitting on chairs and driving round like madmen? If people carried as little as possible around with them, they would be free and happy. We don't really need all this stuff. There is a major displacement of life to virtual reality, the Internet, Play Stations. The sensual, genuine life, on the other hand, is getting lost a little. Yet then sometimes there is a caesura and you appreciate simple things again.
Laub: This electronic book at the Frankfurt Book Fair, what a lot of attention that's attracting. Basically no one wants to forego the printed book and candles. But there are alternatives and we can only wait and see whether, and how something catches on - or not. At the end of the day the fact is that the world changes intuitively because it wants to change that way - and that we find very exciting to observe.

You work together. What are the other's strengths?
Jehs: We are pretty much opposites, which is why we are able to work well together. We don't take it personally if we argue. Designers often have a problem in that they are vain divas and quickly offended. That is not the case with us, as we get to the bottom of our differences. It has always been like that. We can also get really loud. An intern actually once asked us who it was that forced us to work together.
Laub: No, it's not that bad.
Jehs: If we do make progress, though, it's mostly on the back of an argument, and then any disagreement is quickly forgotten.
Laub: On balance you can say that if anything he is ignorant and I am pushy. This is why now and again we get on each other's nerves. If we were both the same, however, things wouldn't work. That is why we complement each other so well. In the way we work as well there are things one of us find easier. I, for example, am somebody that likes sketching and working on a sheet of paper. He on the other hand prefers working in 3D on a computer.
Jehs: I have to be able to talk to him and discuss things, which is when things occur to me that I can then describe. I prefer doing my sketching on the computer, when things look pretty good right away.

Do you test your designs?
Laub: That depends on how generous the manufacturers are.
Jehs: By way of example: When Fritz Hansen had made the prototype for "Space" we had it in the office and kept trying it out. This way we discovered that an extra two centimeters tilt would not go amiss. Now it's a totally different piece of furniture.
Laub: That was an interesting experience. It was in fact my father-in-law who came to visit, sat down in the chair and said "very nice, but what I can't stand is sitting down on something you then can't get out of." That's when I realized he's right, we need to take another look at that. We have almost all our products at home and test them out as well. Much to the disappointment of our wives, who would also like a nice classic. But it's important. We want everything to be right and proper and experience ourselves what we actually design.

You once said you would design furniture for things it would appear don't belong anywhere. What can we expect next year from Jehs+Laub?
Jehs: We mentioned that in conjunction "Stripes". In the hall at home there is all manner of stuff lying around. He has the same problem. Then we came up with "Stripes", for storing all sorts of things. We find inspiration in our private lives.
Laub: Actually in the design process we think about things we would like to have ourselves and then design them. It's about using a corresponding quality of mediator, so that we can ask ourselves the right questions. Rolf Fehlbaum, for example, is an outstanding mediator, he talks to the designer, and when he gets an answer he mulls it over so long that he makes another question out of it. Ultimately he just liaises between the designer and his thoughts, or between designer A and designer B. It's a question of defining these mediating qualities. You have to ask yourself the right questions and force yourself to deliver the right answers. That is why a discussion is so important. That is why we have no idea how so many designers can work on their own.