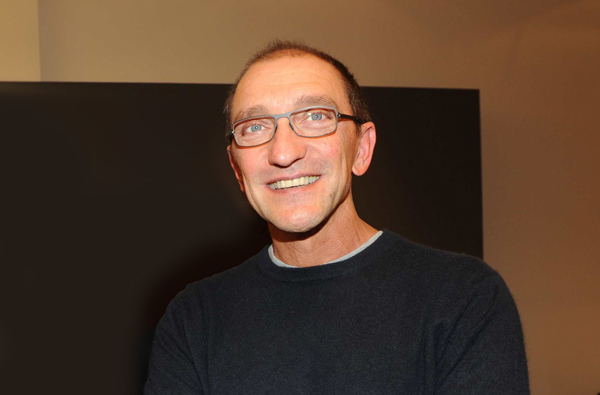 For over ten years now the designer Rodolfo Dordoni has been working closely with the Italian design furniture manufacturer Minotti. His latest design, the "One World Collection", was presented lately at Neue Werkstätten in Munich. Stylepark met Rodolfo Dordoni and spoke to him about his collaboration with Minotti, how he sees the role of Art Director and the tasks facing design in the future.

In terms of design what did you have in mind with the "OneWorld Collection"?
Rodolfo Dordoni: When I started working with Minotti over ten years ago they asked me, to think about a new way of presenting a novel furniture concept. From the outset we thought it was important to try and come up with an idea every year that served as a brief for the collection, because we wanted the product to be part of a collection, not just one of various different products.
So the strategy involved finding a theme for the collection, one we could use with regard to the choice of colours, materials and in a certain way even the shape of products. We created images of products and of space, where they were presented in a certain context. The first one was "the house of smokers", a smoker with a cigar. Everything in it was brown; the materials were warm, like in a private studio.
Two years ago we used the idea of music. We used items in the exhibition fair in conjunction with music. This year the "OneWorld" theme has a double meaning: a global world and the world where we travel. We think about travelling in general and realize that at the moment all countries resemble each other a little. So this is an attempt to blend taste that is interesting for everyone. But is strange to say "international", because nowadays everything is international, which is the reason for our not calling it international style but rather "OneWorld".

You have been working with Minotti for ten years now. But you also collaborate with several other companies. How does that work?
Dordoni: Yes, that's right. Minotti is one of my most important clients but I work also for several others as well. With regard to typology I try to work with just one company. A long time ago it was easier because back then companies were more specialised. One company would produce beds, another sofas. Nowadays every company produces everything. It is a bit difficult to say I work with one for typology. I do, however, try to pursue two different strategies for two similar companies. I work with Cassina, and I even work with them on seats, but using wood. Wood is a material that does not feature in the Minotti production culture. I work with Flou on beds, who produce beds and sofa beds. So it is a bit of a slalom.

Slalom, that takes us nicely onto my next question: Alongside product design you also work in the fields of architecture, interior design, exhibition design, and private villas. What are the major differences?
Dordoni: Actually there is no slalom involved there because I studied architecture at university, where I met Giulio Cappellini. When we graduated we decided to work on a new concept for his family company, which produced traditional furniture. So we came up with the idea for a new Cappellini factory. This was the first time I had ever addressed the topic of furniture. I thought about it, about my relationship with furniture, and I started working with Cappellini. But nothing changed. Compared to architecture - just change the scale of the project. But the way you use your mind, your taste, and the sense of proportion and shape are the same. I can't make a round building; I can't make a round sofa. I am rational, I am cubic.

That was the time where you were Art Director at Cappellini. How would you define the function of an Art Director?
Dordoni: When I first started working at Cappellini there was no artistic approach as you imagine it today. At that time there was just Giulio and me. We had to do everything, even the packaging and answering the phone: "Cappellini. How can I help?", absolutely everything! But we were young, still maturing and the idea of the artistic approach was changing. I think it involves taking suggestions from inside and outside the company and comingup with a new image for both the company and its products. It means to have a 360-degree overview of a project. That doesn't mean that as Art Director you have to be the one rersponsible for catalogues and advertising. What is important, however, is that you have an eye on everything.

If you had to differentiate: Which client gives you the greatest leeway and freedom?
Dordoni: For me freedom isn't as important as the atmosphere in a company. That gives me strength. I want the positive feeling I have with regard to the people I work to continue and I do not want to change it. I want to be happy when I go to work.

Which questions and tasks do you see design having to face in the future?
Dordoni: Considering what design is at the moment, I hope that those working in design become more modest than they are now. I think that at the moment we give too much satisfaction to clients. I think we need to be simpler, more modest. I don't like the attitude designers have of going about their work not out of passion but only for fame and glory. And I do not like the public relations involved, I like to spend my time just on products. Designers have to think of their career as a job, not a show.