Good news seldom comes from Detroit. The motor city is, like New Orleans, one of the tragedies of US urban history. Arriving as a stranger in Detroit is like traveling to the heart of modern darkness. Endless black-top running through line after line of suburban dwellings, until at some point you reach the eight-lane "Eight Mile Road" - ever since the race riots of the 1960s the border line between black and white, between downtown and outta-town, between poor and rich.

Like the remains of a skinned snake, the cradle of US mobility lies on the banks of Lake St. Claire, directly opposite Windsor in Canada. Infrastructure is now so run-down as to be almost non-existent. It was back in the 1960s that the last streetcar headed up Woodward Avenue, the mo-town's backbone and the first highway in the United States. For years now Detroit has led America's ranking of the poorest cities. Seemingly God-forsaken, it feels as if civilization left town with that tramcar. The city has never found itself a new identity that was not car-centered. It has remained Motown: home to the headquarters of the "Big Three": General Motors, Ford and Chrysler, and to the auto-show every January. People here are proud of the history, if only because there is no alternative.

Now that Chrysler and General Motors have both hit the wall, the city is not only facing a further dramatic set of job cuts, but the final loss of that identity. For 40 years now, words of encouragement in Detroit have tended to start with "re" - rebirth, reinvention, renaissance. And now the idea has reached the carmakers' marketing departments. The motto now is "to start over". Simply going for size, producing Pickups and SUVs that promise comfort and safety, went well with the post-9/11 trauma. But in the long run, the gas-guzzlers, and they featured few if any technological innovations, were not going anywhere. The US autoindustry is not only lacking in technological know-how, but in sex appeal, too. Once upon a time, Chevys, Corvettes, Mustangs and Cadillacs were cool; even in the 1980s they were still energizing that American myth of being "on the road". But at some point they seemed so lame and uninspiring that even Americans no longer wanted to buy them. And it did not take much to push the Big Three, already reeling from heavy pension and health insurance fund obligations, over the edge.

General Motors, for almost 80 years the world's largest auto company, is now largely nationalized, following Chapter 11 and a new start - an unbelievable shock for most Americans, who view government involvement as a taboo. There is immense pressure on the industry to successfully reinvent itself and henceforth produce cars that can actually compete internationally. Because it is not likely to get a second chance. As far as battered Detroit is concerned, however, absolutely everything is at stake: not just another dramatic dismantling of production facilities, it is threatened with the ultimate loss of its identity. No city is a more radical symbol of the impact of the US adage of "take the money and run" than Detroit. And what has been left behind is enough to despair. But ever since the old days of the Wild West and ghost towns,, there has always been that staunch US belief in dynamism and social progress, in the fact that a new beginning can arise from nothing. Whether Detroit succeeds in this is the big question, as yet neither the music industry, the casinos nor the building of sports complexes have been able to get the city moving again on a long-term basis.

For all the good fortune that saw it emerge as America's fourth largest metropolis in the space of only 50 years, even in its heyday Detroit (with a population today of less than 900,000) never melded into a real city, but remained a patchwork ensemble. Its founding fathers had little interest in cities. Cursed be the city, none other than Henry Ford once quipped that the way to solve a city's problems is to leave it.

With its price tag of 400 bucks, Ford's "Tin Lizzie", the legendary Model T, was the world's first mass-market auto. It put America on the road and enabled above all the inhabitants of Detroit to get out into the green surroundings. Urban decay was preprogrammed with the first mile the first Model T drove. The decentralization in the Detroit conurbation, which has gone so far as to cause the collapse of the inner city proper, has not prevented the city from still preserving some kind of identity. And yet with its last theaters, clubs, the renowned art museum, the opera house, the ice hockey and baseball stadiums this ghost town, where life is hard and inhuman, and lived on the subsistence level, still manages to preserve a touch of social cohesion. In the suburbs, which relentlessly strangulate the spirit in the sick inner city there is a curious ambivalence comprising local patriotism and merciless ignorance.

How touching the memories voiced in the suburbs, of a world that is rapidly dying out: When Dad still worked in the legendary glass "Ford Motor Company" factory, when kids went to the so-called Ford Rotunda for the Christmas Fantasy - an exhibition pavilion Albert Kahn created for the 1933 World Expo in Chicago and shaped like a gigantic stack of four gears. Each year at Christmas, the Ford Rotunda, with its daring internal dome designed by Buckminster Fuller, hosted the Fantasy show, until disaster struck just before the event in 1962, and the Rotunda burnt to the ground. Even Americans find it awful that dreams can be so short-lived. Yet no Detroit inhabitant who has moved to the suburbs will regret the city's misfortune and ever return.

Many of the older wonders have since been torn down, such as the legendary Hudson's department store on Woodward Avenue, once the largest in the world. And those that have not been torn down stand empty - the Highland Park, Fischer Body, Warren Motor Car Co., U.S. Rubber, Eddie Rickenbacker, Cadillac Fleetwood, Rolls Royce Engine, and ThyssenKrupp Budd factories. One of the most famous ruins (alongside the impressive 18-storey Michigan Central Station) spreads out across 142,000 square meters on East Grand Boulevard: the site has been in decay ever since the demise of the Packard marque at the end of the 1950s.

There is hardly an other major US city that nurtures such a culture of ruins as does Detroit. There are countless Web sites offering info on the hundreds of demolition stories. In 2005, this zest to tear things down brought the National Trust on the scene, and it resolved to put all of Downtown Detroit on the list of endangered cultural monuments. Not that that helped much. Detroit is high and dry in that its history has overtaken it. The townhouses of an upper class that has long since packed up and left are now "Nursing Homes" hastily nailed back together. And the ill and infirm sit on the verandas like so many war veterans waiting for their release.

Read here "Detroit, a ruin from the automobile era – Part 2" 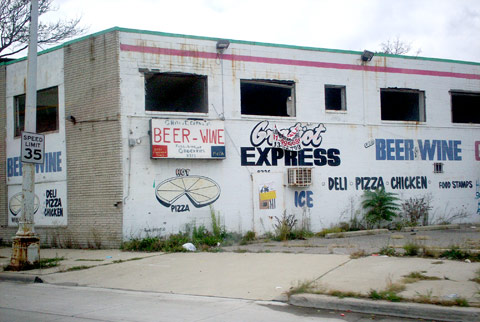 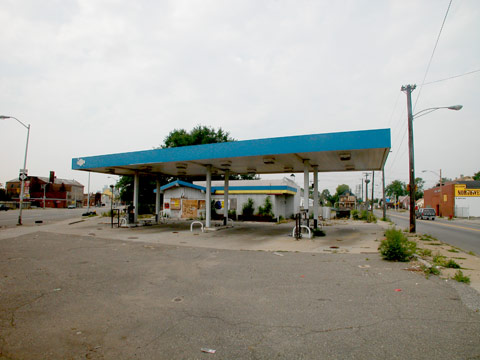 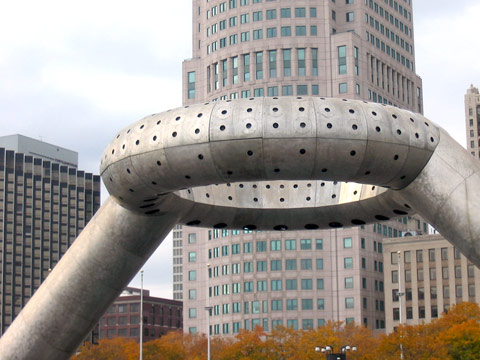 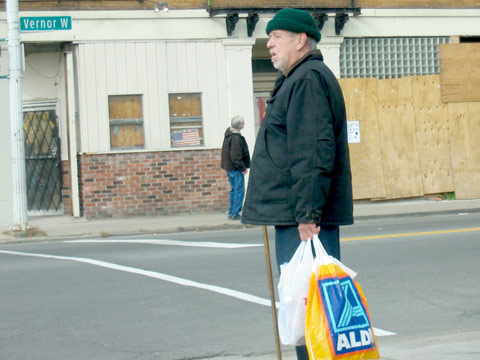 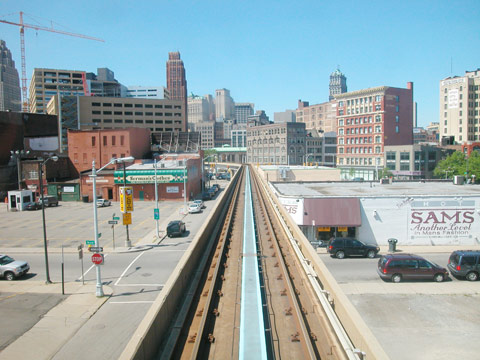 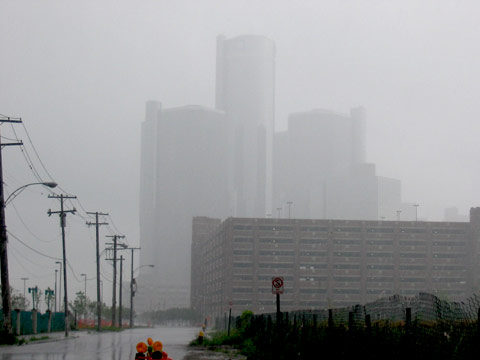 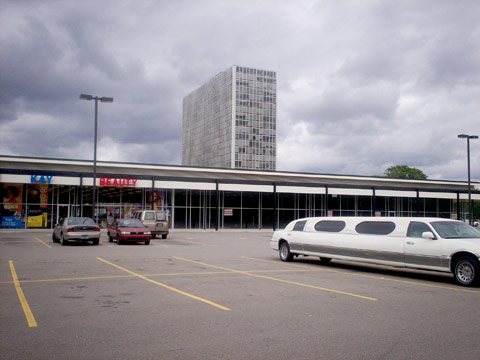 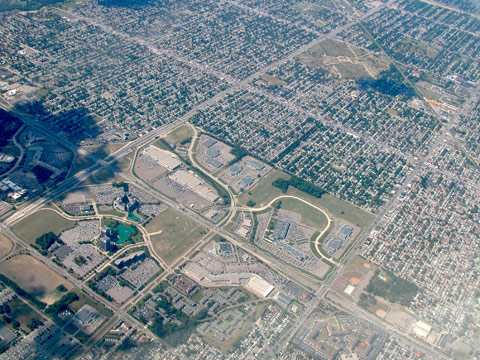 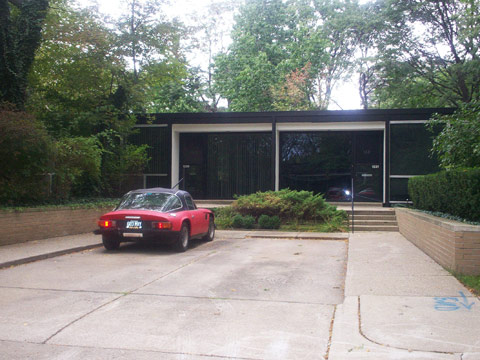 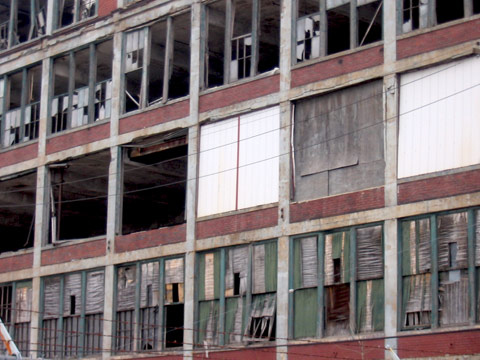 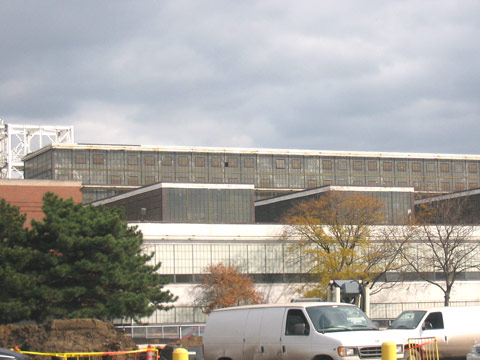 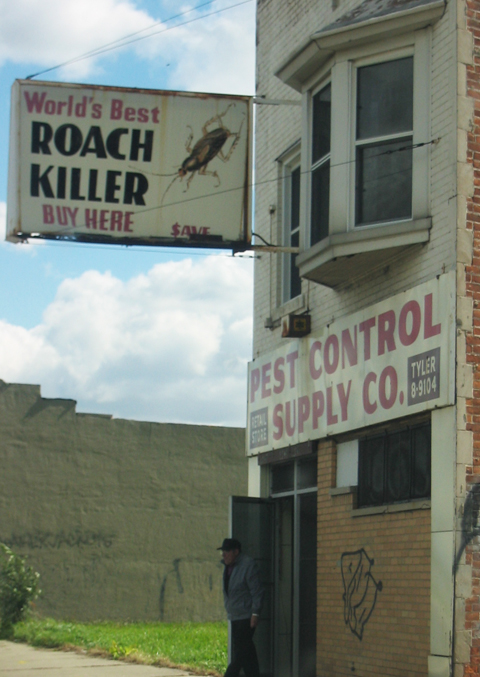 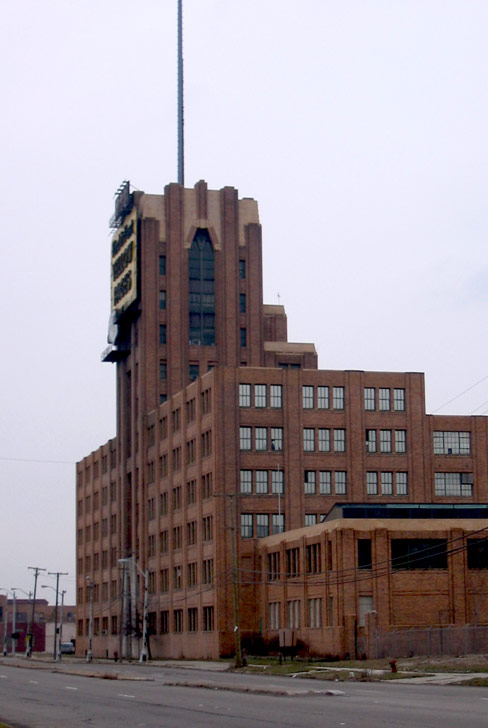 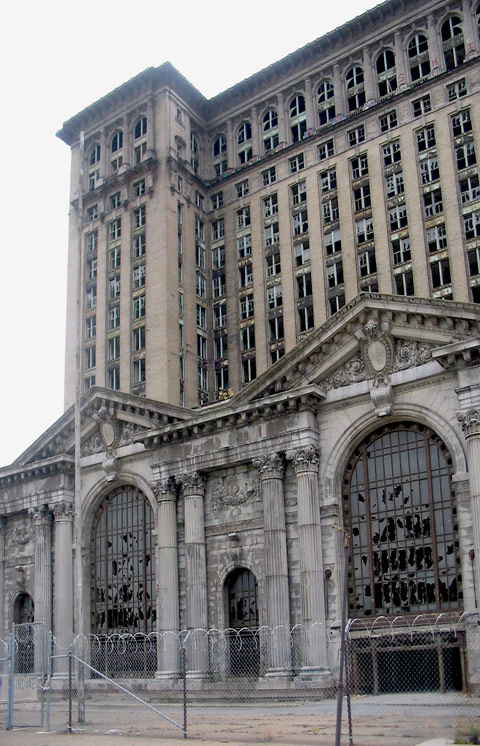 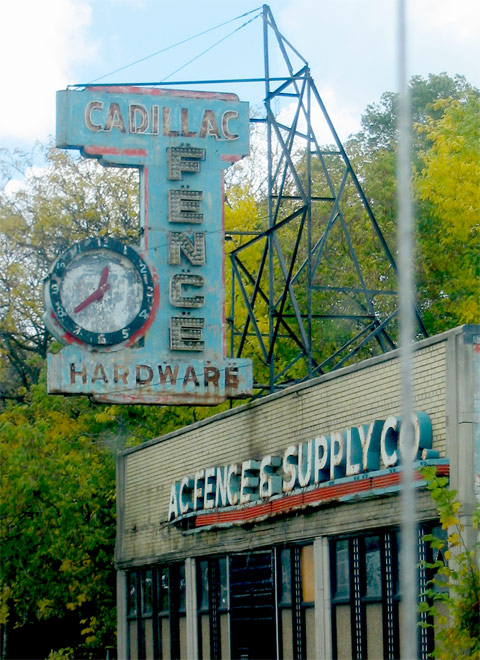 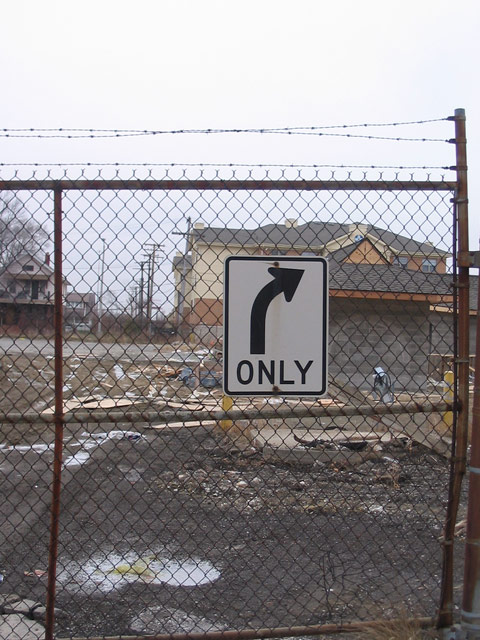 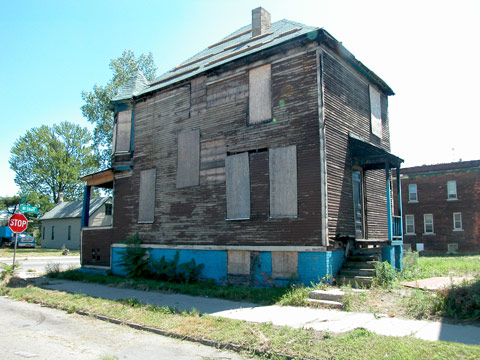 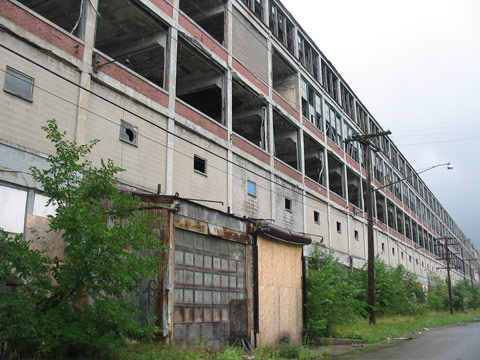 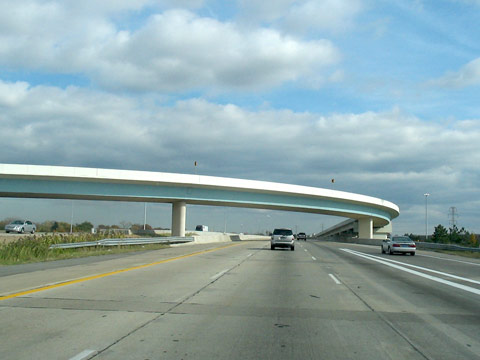 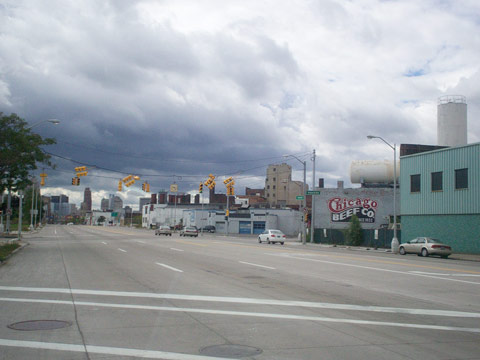 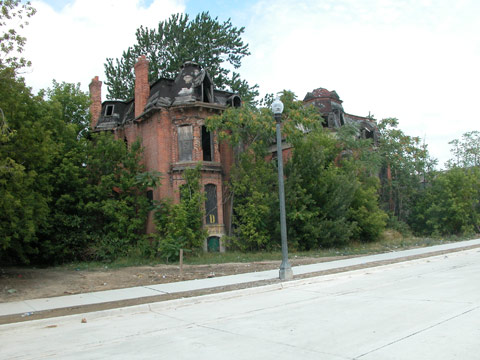 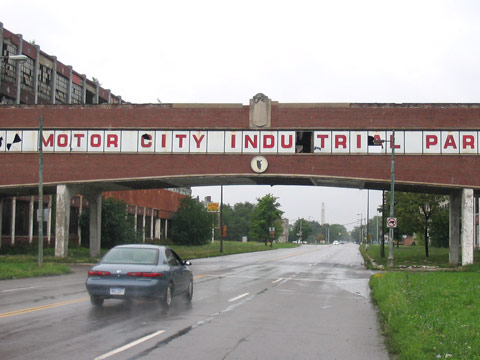 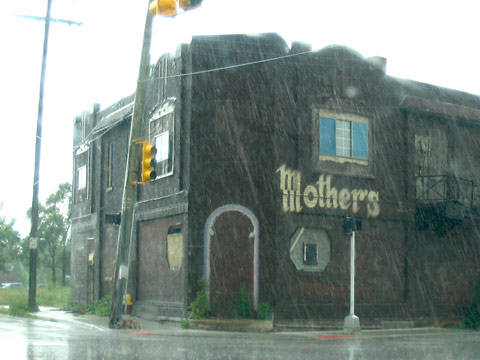