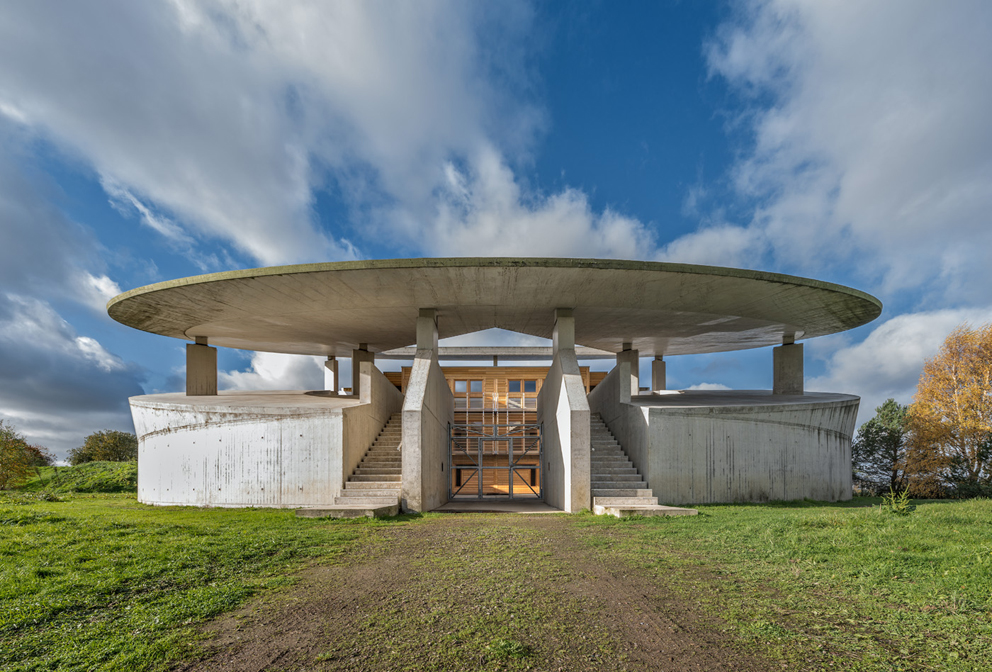 The roof is positioned like a discus over the courtyard. Photo © Tomas Riehle / Artur Images + Raimund Abraham

At the 6th Architecture Biennale in Venice in 1996, a model of a circular “House for Music” attracted the attention of two visitors: The proposal envisages sheltered interiors beneath a round concrete disc. Raimund Abraham had created it of his own volition. Estate agent and art collector Karl-Heinrich Müller from Neuss and the architect he worked with, sculptor Erwin Heerich, were so taken by the idea that they spontaneously invited Abraham to realize it in Hombroich, where Müller was busy expanding the “Missile Base” into a unique art domain for Germany. In 1984, Müller had started transforming a run-down estate in the hamlet of Hombroich outside Düsseldorf into an art space in which his collection could be presented in small exhibition pavilions scattered round the grounds. He soon extended the successful concept from the “Museum Insel Hombroich” to the neighboring former NATO Missile Base. Only now, 18 years after Abraham first created the design, has the “House for Music” been finally realized.

The stringent architectural concept of Heerich’s buildings on the Museumsinsel were diluted on the satellite grounds: Alongside Heerich’s strictly geometrical brick edifices stood a building in fair-faced concrete housing the Langen Foundation, the brainchild of Japanese architect Tadao Ando. And even if Portugal’s Alvaro Siza with his new build for the small museum of architecture later took up the thread of Heerich’s aesthetic of exposed masonry, Abraham’s design for the “House for Music” certainly steps out of line: The concrete building, consciously monolithic thanks to in situ casting, resembles a fort. It is no less sculptural than Heerich’s designs, an oblique cylinder supports a huge circular disc (the roof), which with its massive 33-meter diameter tilts 15 degrees. A large triangle is cut out of the disc to allow light to descend into the inner courtyard, which points in the direction of a watchtower that has survived from the missile base days. In the corners are circular stair turrets that access the lower and upper floors. Ten pillars support the concrete disc’s 1,500 tons. Inside there are four apartments, a large common room, a studio and for rehearsal rooms with double to room height. Each room logically forms a segment of a circle, meaning there are no parallel walls, which is said to improve the ambient acoustics. The windows and a larch curtain façade imbue the gray concrete structure with color and warmth. In the middle of the inner courtyard, a round cut-out skylight lets daylight enter the subterranean event space.

Abraham, whose best-known works include an apartment block in Berlin’s Friedrichstrasse and the Austrian Cultural Forum in New York, likes to deploy visor-like discs with several incisions cut into them, in front of his facades. In Berlin and New York they are made of steel. For the last project in his career, the House for Music in Hombroich, Abraham translated his architectural trademark into “cold” concrete and “warm” wood. It is a contrast that Louis Kahn skilfully perfected for his design of the Salk Institute in California.

The HfM’s future is still undecided

The long period of seven years required to construct the Abraham building was caused by the fact that all three “fathers of the idea” died during the planning and construction period, Heerich in 2004, Müller in 2007, and Abraham in 2010. Thanks to detailed plans for the realization that Abraham had already produced, it was possible to complete the building posthumously exactly as intended. However, Stiftung Hombroich does not itself wish to make use of the building and is looking for a tenant, and as a result completion of the interior has been delayed. Whether, as originally intended, it will be musicians who occupy it is uncertain.

On the one hand it would seem as if the world to which he bequeathed it is not that interested in the architectural heritage of charismatic patriarch Müller. On the other, this helplessness spells an opportunity: After all, one of Müller’s best qualities was his zest for giving gifted minds who were friends “space” in Hombroich, so new users could bring added zest to life on the missile base. And it is only of secondary importance whether they come from the world of music, art, or science. Today, the “laboratory of the arts” in Hombroich is inhabited by composers, poets and scientists alike. And a “competition of ideas” has been announced to decide what use the building will be assigned. What is certain is that the building marks an interesting architectural addition to the art world of Hombroich. For all his independence in the shape and materials, architecturally speaking Abraham followed Heerich’s notion of “walk-through sculptures” that constitute artworks in their own right. The magic of combining art, architecture and landscaping lives on in Hombroich. 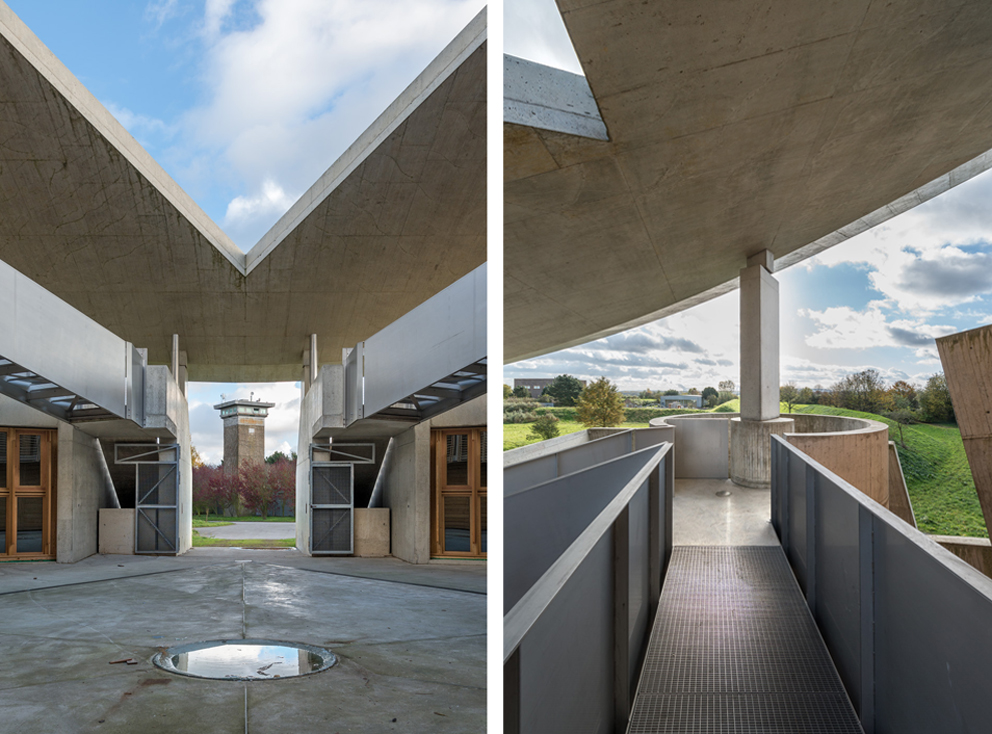 The House of Music by architect Raimund Abraham is granting views to the landscape of the former missile base. Photo © Tomas Riehle / Artur Images + Raimund Abraham 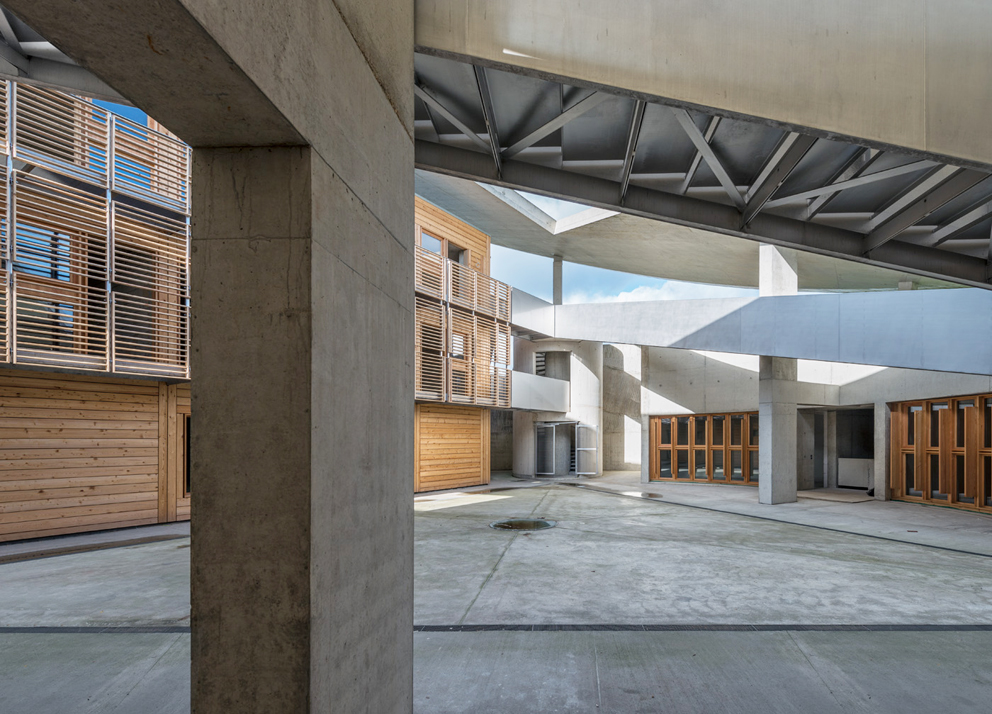 The “cold” concrete and the "warm" wood form a contrast in the materiality of the building. Photo © Tomas Riehle / Artur Images + Raimund Abraham 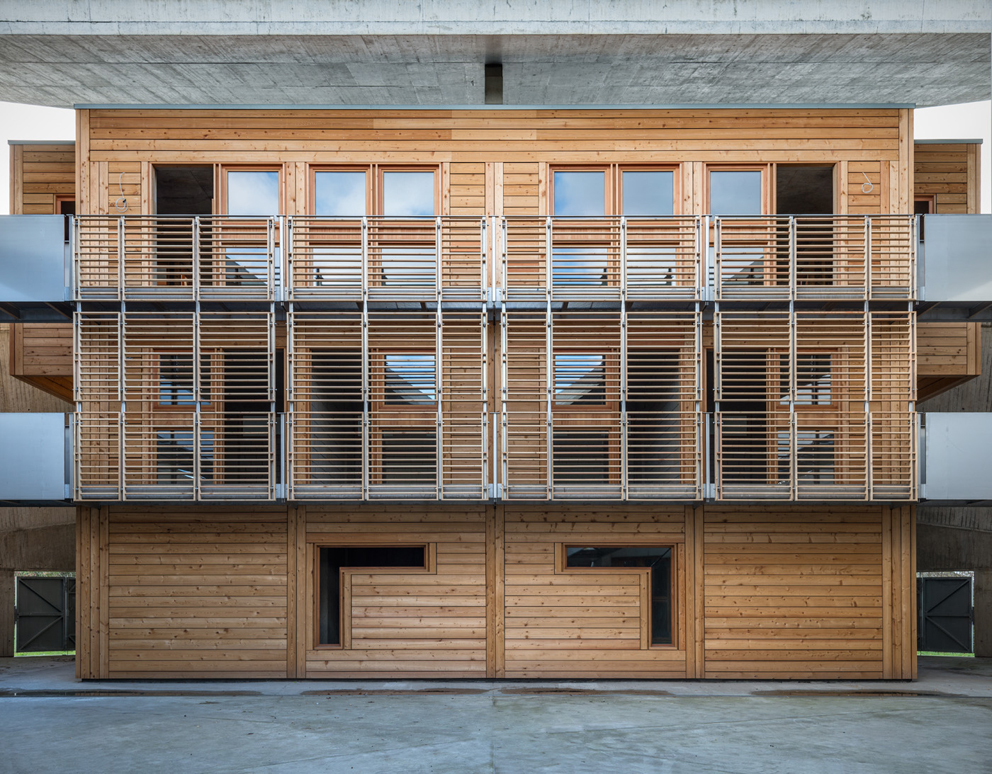