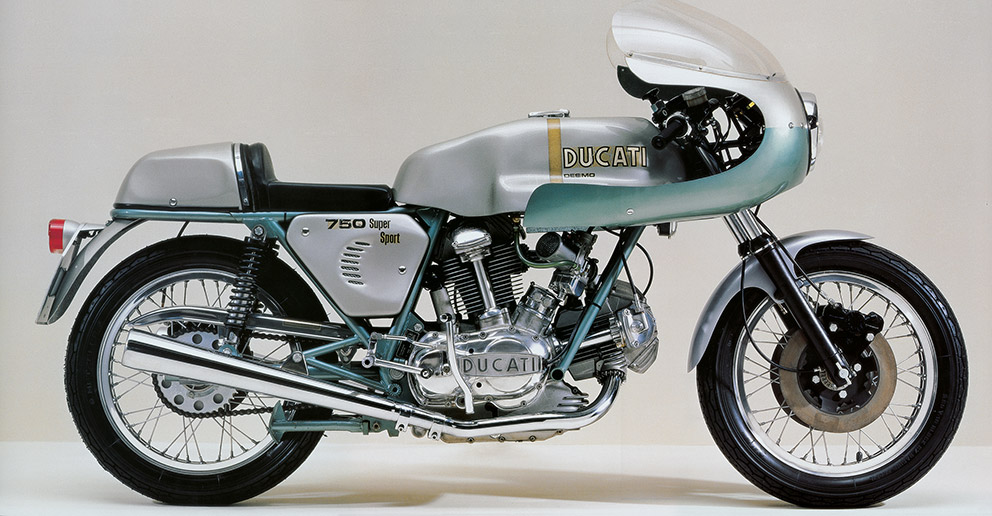 The first superbike that ordinary people could afford: “750 SS Desmo“ from 1974. Photo © Ducati

The Desmodromic system premiered 1974 in a twin cylinder road bike: the “750 Supersport Desmo” by Ducati. It originated in racing and was based on the victorious racing bike with which Paul Smart won the 200-mile race of Imola in 1972, ahead of Bruno Spaggiari, also on Ducati. Even “Ago(stini)” was beaten, who was forced to drop out with his MV Agusta. Several features distinguished the “750 SS” from the “750 GT” road bike, a sports touring bike: the “Desmo cylinder heads, improved brakes, its appearance and careful assembly in the racing division. The bike had 10 HP more than the Honda “CB 750” and was 50 kilos lighter to boot. Though initially only 25 models were to be built, the response was much more positive than expected.

The special gem was the engine in which the crankshaft drives the two camshafts and the desmodromic valve control via two bevels. The word “desmodromic” comes from the Greek words “desmos” (bond or knot) and “dromos” ¬ (track, way). In the field of mechanics “desmodromic” refers to mechanisms, which can be activated in two different directions thanks to their special regulation. Today, it generally describes a valve control system typical for Ducati motorbikes.

Normally the valves of a combustion engine are opened by rocker arms and valve tappets and closed again by valve springs. The Ducati twin cylinder engine not only works with one camshaft per cylinder, but also with a desmodromic valve control without springs that also controls the closing movement. Without going into too much detail: In order to achieve that numerous bevel gears serve to first guide the horizontal rotation of the crankshaft to a vertical intermediate shaft and then back to the horizontal. In other words, a lot of moving parts have to be precisely tuned to one another. And to what end? Naturally in order to produce a higher performance. The desmodromic valve control combines relatively high rpm values with low friction as there is no need to work against value springs. Moreover, the valves are opened and closed much faster than in conventional engines.

People tend to say that the exhaust of the “750 SS Desmo” sounds incredibly loud but beautiful. This resulted in problems with registration. But the bike had other special features: The plastic tank was extremely long and the forged handlebars were set fairly far forward so that the driver had to sit fairly far back. To activate the clutch you needed a strong forearm. In addition, the gear shift was on the “wrong” side, namely on the right, and worked the other way around: The first gear was at the top. The “750 SS Desmo” achieved 65 HP at 8,500 revolutions per minute; the compression ratio was 9.8:1. The cylinder angle is 90 degrees which results in the engine running with very low vibration. Large 40-millimeter-Dell’Orto carburetors were employed together with large mesh sections as air filters in front of the intake funnels.

The frame and the lower section of the half fairing were varnished in shiny turquoise, the rest of the covers, mudguard, the tank and the saddle body in a light silver. In other words, the Ducati “750 SS Desmo” was not only a technical gem, but also aesthetically stunning. The first superbike that ordinary people could afford. 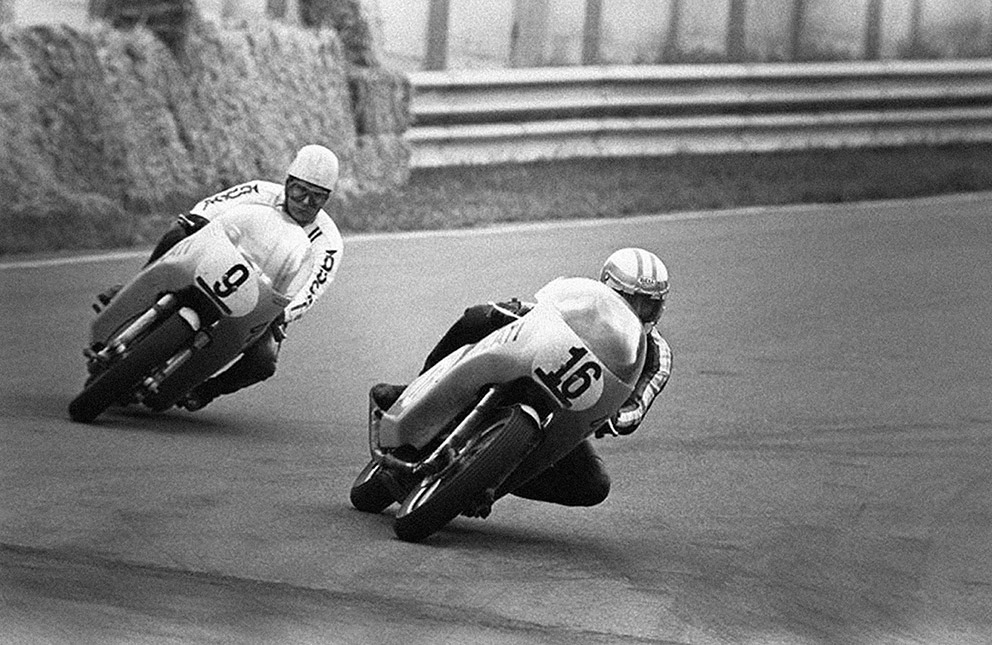 Based on the victorious racing bike with which Paul Smart won the 200-mile race of Imola in 1972, ahead of Bruno Spaggiari, also on Ducati. Photo © Ducati

The desmodromic valve that Ducati developed in 1956 works without springs that also controls the closing movement. Photo © Ducati 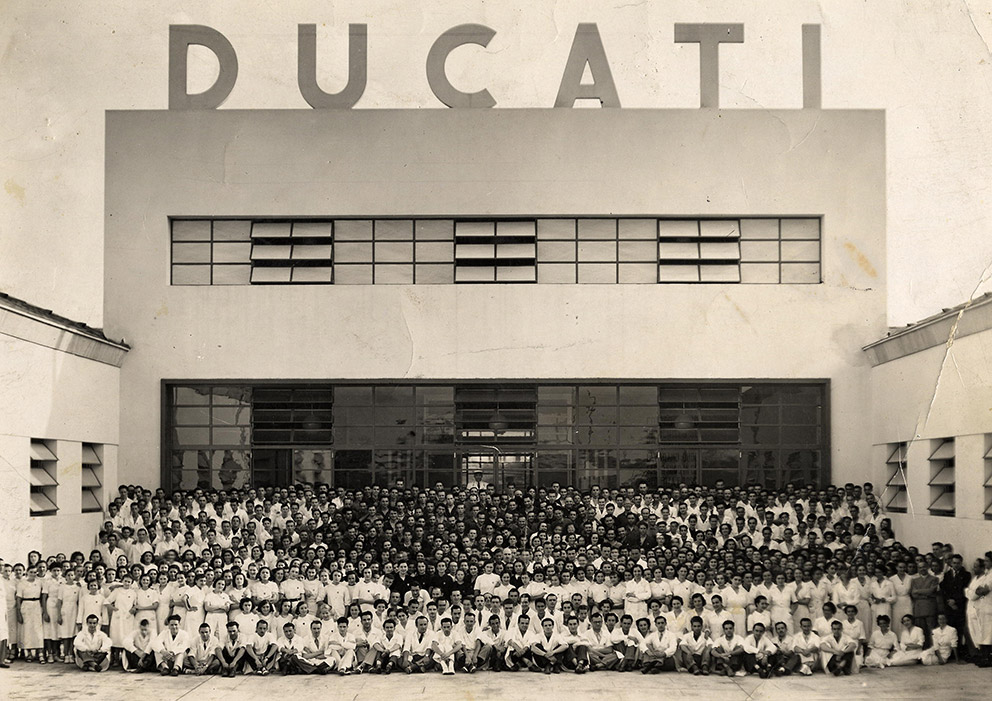 The staff of Ducati in front of the head office in Bologna, 1939. Photo © Ducati
Advertisement