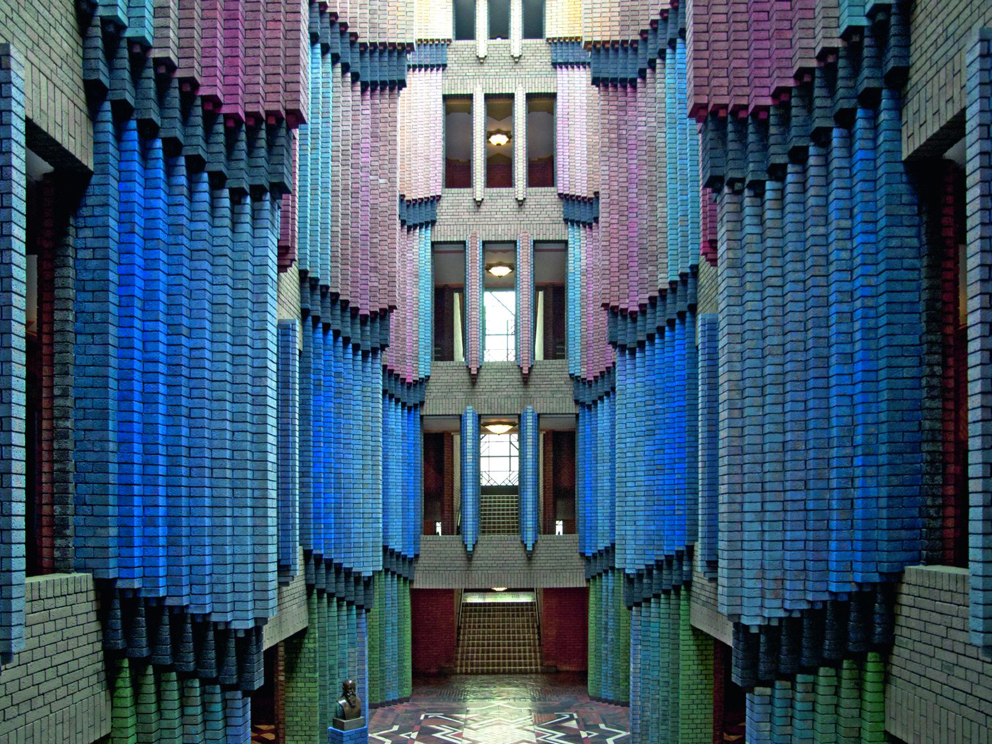 Built in 1920-24 the administrative building of Hoechst AG in Frankfurt am Main is a major work of architectural expressionism. Photo © marixverlag

In the first decades of the 20th century, the architect and designer Peter Behrens (1868 –1940) was considered among the most important and influential figures on the German design scene. A substantial swath of his extensive output, which borrowed stylistically from Art Nouveau, Neo-Classicism, Expressionism and Modernism, has survived until the present day, with many structures still being celebrated as architectural icons of their day.

After Kunsthalle Erfurt devoted a wide-ranging show to Behrens the designer (Stylepark reported) this spring, architect, architecture historian and photographer Carsten Krohn is now following suit with his publication “Peter Behrens Architektur”. Focusing exclusively on the architectural side to Behrens’s oeuvre, the volume claims to be the first complete documentary of the master builder’s creations.

It bears mentioning here that this publication is not an architectural and historical exploration in the traditional sense, but is essentially an illustrated book. Which is both its forte and its weakness. It’s a forte because with his somewhat unspectacular yet extraordinarily precise pictures Carsten Krohn has succeeded marvelously in capturing the essential qualities of Behrens’ buildings. It’s a weakness because the main emphasis is on the images, while the accompanying notes, two or three sentences at most, sadly do not paint anything like a comprehensive picture of the various projects to which Behrens devoted himself.

Following a short introduction, which offers a brief sketch of Behrens’ career and illustrates the key characteristics of his architecture, the projects are presented in chronological order. The idea was, writes Krohn, “to discover patterns in Behrens’ designs that run through his oeuvre like an overarching theme.” The idea of presenting the complete oeuvre, he moreover explains, serves to “reveal the evolutionary development and draw attention to the harmonious and clear proportions of the structures”. Krohn talks about a “system of links and relationships” – an inspiring idea which, regrettably, he then does not fully deliver on. Leaving us readers with the task of extracting said patterns from the images ourselves, which, or so this reviewer admits, he had difficulty doing.

There are one or two historical photographs to illustrate each project. Moreover, in the case of buildings that have survived to the present day Krohn provides a number of pictures that show what the edifice in question now looks like. Some of these are shot from the outside, some show the structures’ interiors, while others focus is on details in the design. Here Krohn does a great job of repeatedly demonstrating Behrens’ consistency – and variety – as regards the use of particular formal themes. Clear examples of this include the enormous complex that houses Linz Tobacco Factory (1929 -1935) and the Hoechst AG Administration Building in Frankfurt/Main (1920 -1924).

Behrens took care to apply intricate detail even to his most mundane industrial buildings and Krohn knows how to accentuate the architect’s love of detail to maximum effect. Have you have ever asked yourself who might have instilled that extraordinary panache for detail and perfect command of proportions in Mies van der Rohe? You will find the answer in this book.

Indeed the publication inspires its readers to have rethink the relationship between Behrens and van der Rohe – they were, after all, associates for a time. Krohn demonstrates, for instance, that the legendary “Mies corner” in fact features in two of Behrens’ projects, namely in the building for the Frankfurt Gas Company (1910 -1912) and the German Embassy in St. Petersburg (1911 - 1913). Not surprisingly, these were created while Mies van der Rohe worked for Behrens’ firm. The masterly pair likewise share their passion for the architecture of Friedrich Karl Schinkel and Frank Lloyed Wright, which proved to be a substantial source of inspiration for them.

Carsten Krohn traveled extensively in preparation of this book. And we can safely assume that in most cases it required a great deal of persuasion to get permission to take the photographs. Such diligence and perseverance certainly command respect.

Krohn’s aspiration to achieve completeness in his documentation also has a welcoming side effect in that we not only get to see buildings that are prominent and significant in terms of architectural history, such as The Alexander and Beronlina House on Berlin’s Alexanderplatz square and the AEG Turbine Factory in Berlin’s Moabit district. In addition, the volume depicts works that would be familiar only to specialists and declared experts on Behrens’ oeuvre. Examples include the synagogue in the Slovakian town of Žilina (1928 -1931) and the redesign of the façade of “Stern” department store in Zagreb (1927 - 1929), which bears witness to Behrens’ involvement with the De Stijl movement.

Krohn’s photographs result from his thorough research and investigation into each single building. His feel for detail and key perspectives deserves utmost praise. If we were to pick out one outstanding example of his photography it would have to be the side façade of the AEG Turbine Factory. The shot illustrates magnificently how even in this masterpiece of industrial architecture Behrens makes reference to antique temple design.

However, Krohn’s decision to include in the book Behrens’ “lost” buildings, many of which were destined as temporary exhibition structures in the first place, fails to convince. It would have been more beneficial to dedicate this space to background information on the buildings still in existence. Another shortcoming is the general lack of groundplans and elevations or sectional views, which in many cases would have aided a deeper understanding of the projects. As things are, readers will either need to rely on their prior knowledge or use additional sources. 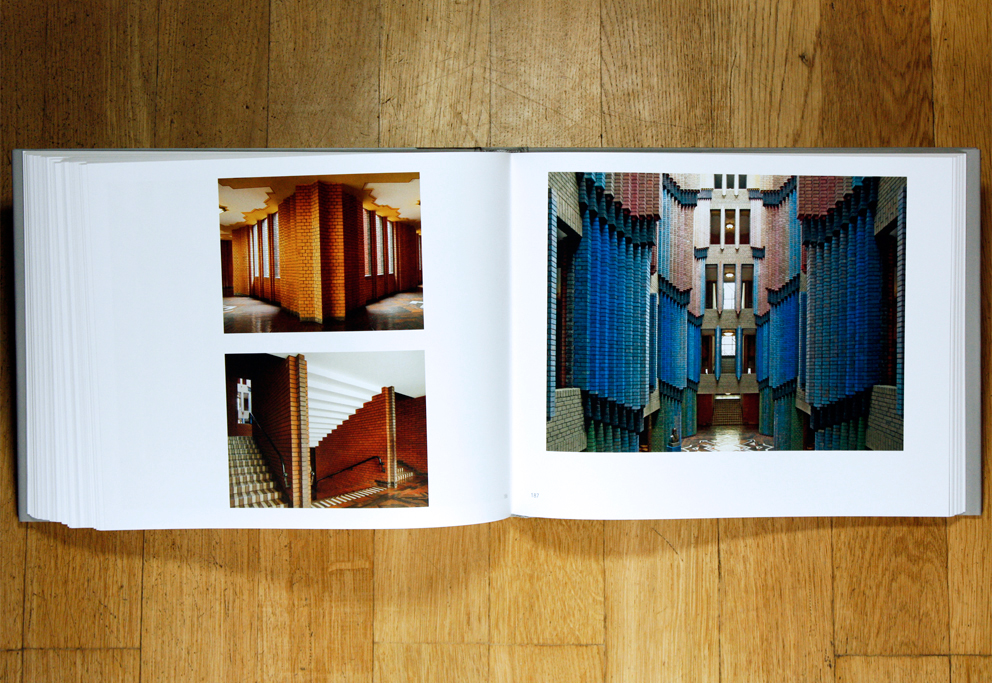 The conrete structure, which is deluded with bricks opens inside the building to a central atrium, whose upper end is forming a glazed dome light. All image out of the book "Peter Behrens Architektur”, marixverlag, Photo © Julian Zatloukal, Stylepark 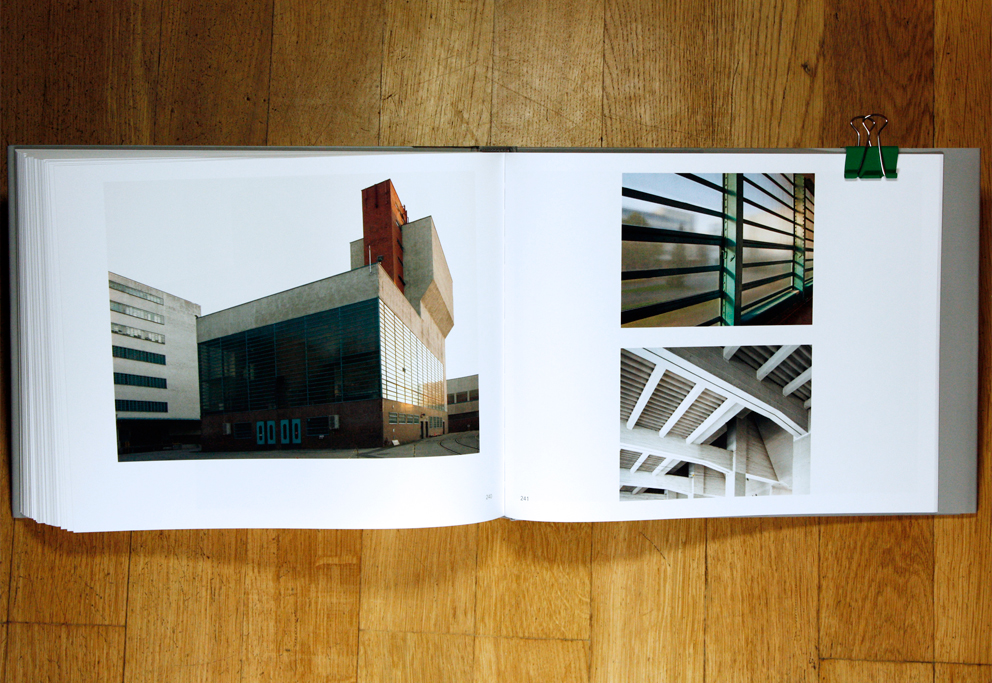 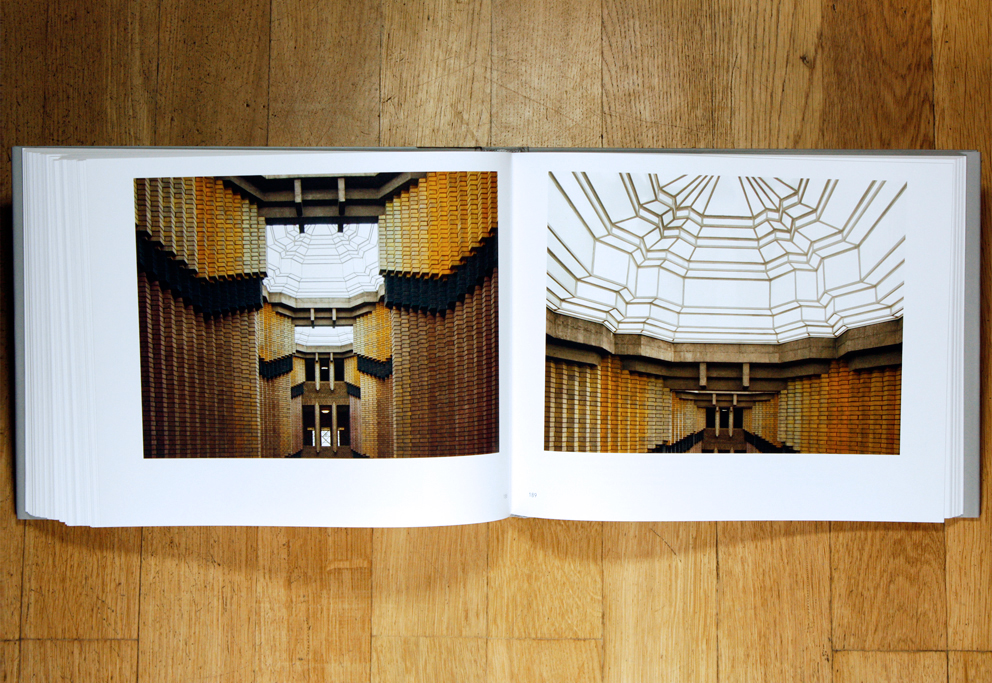 The polygonal brick columns, which support the crystalline shaped domes were painted with the colors from the color factory Höchst. 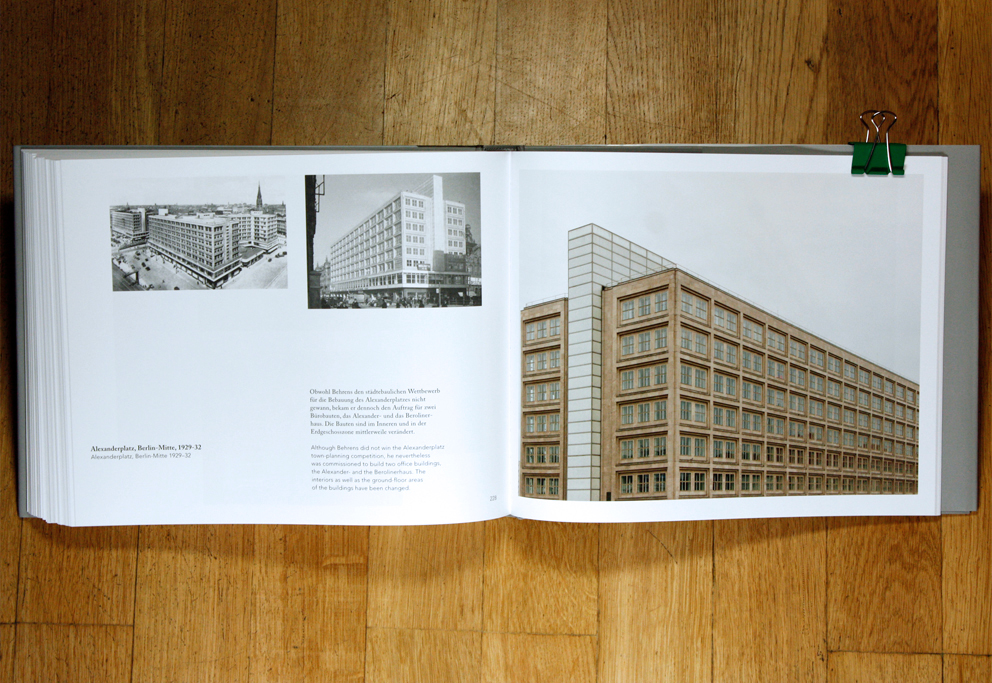 The Alexander- and the Berolinahaus at Alexanderplatz in Berlin were built from 1929-32 in the course of a redesign of the entire space-conditioning. 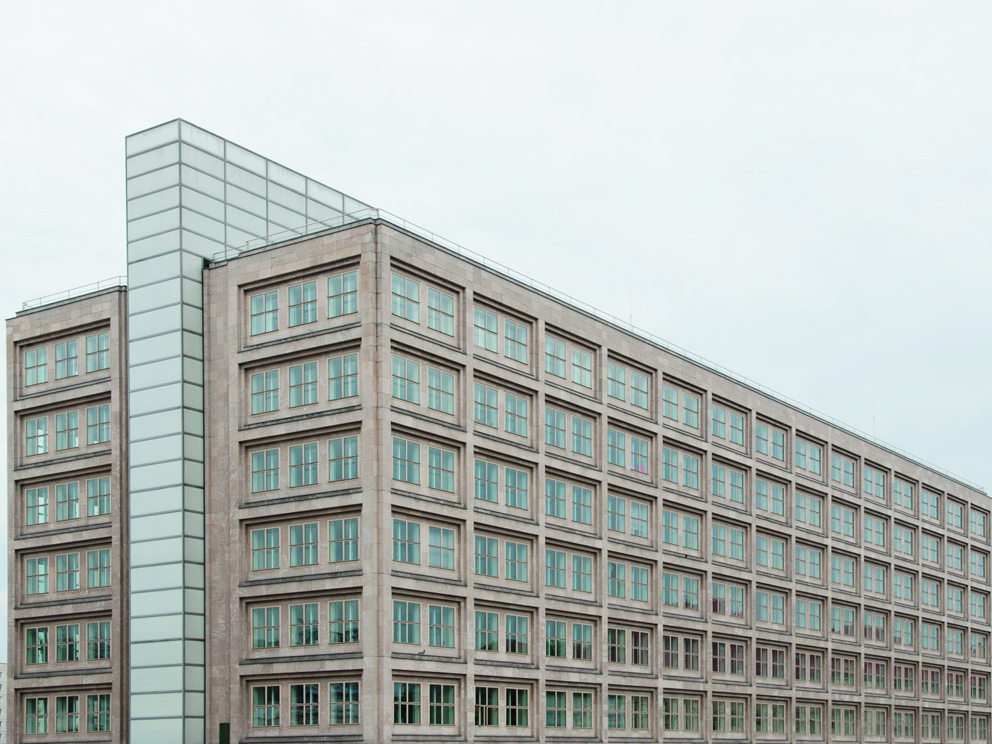 The sober office buildings - now the oldest houses on the site - are in the style of classical modernism. 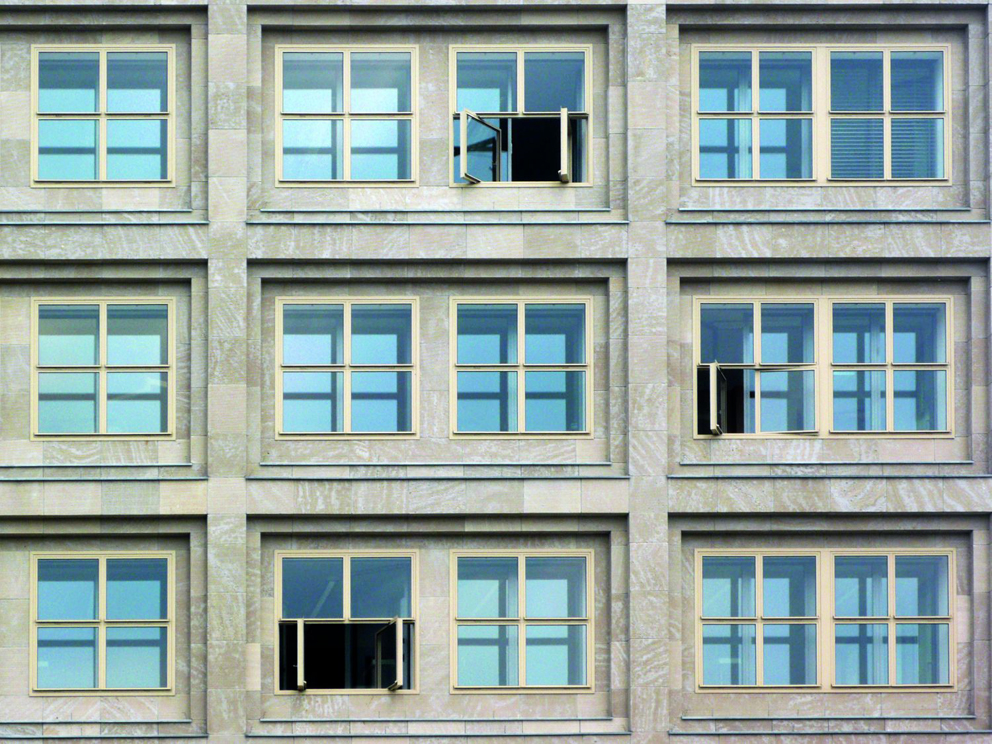 The detailing of the limestone-clad stone facade refers to Behrens old preference for classicism. 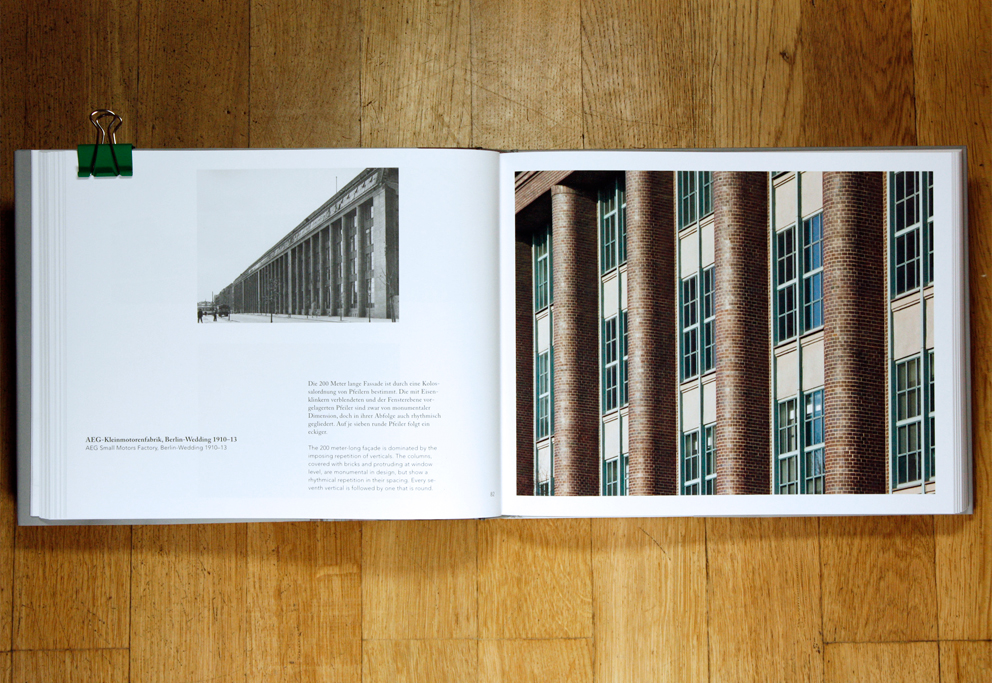 Monumental pillars characterize the neo-classical facade of the AEG engine factory, which was built from 1910-13 in Berlin.
Advertisement