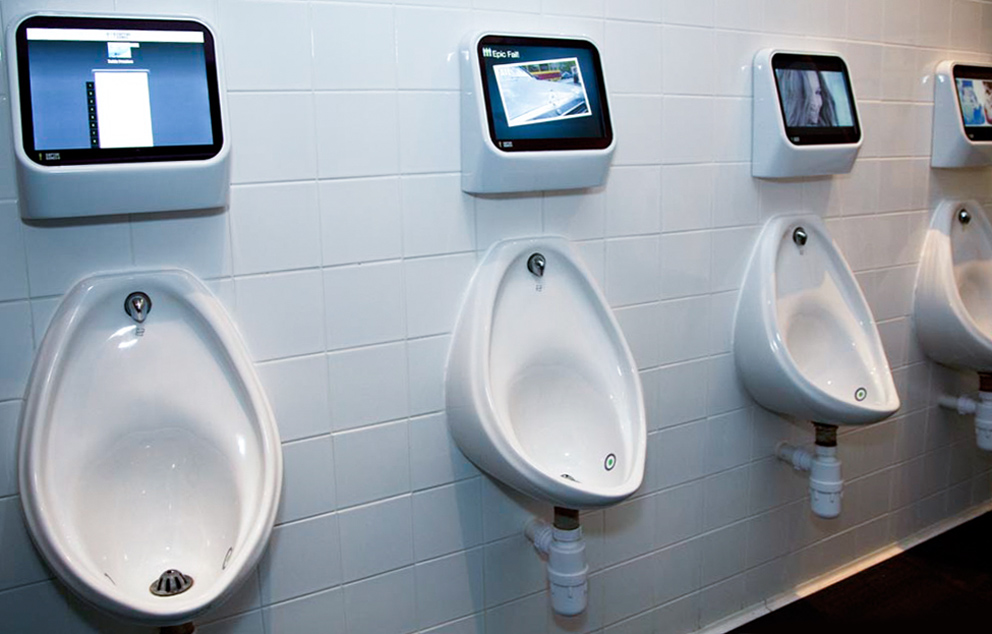 The interactive urinal “Sega Toylet“ has a monitor, on which you can play videogames, developed by the Japanese game provider Sega. The games are controlled by the direction, intensity and endurance of the urinary spout, which is analyzed by a sensor, installed in the basin. Photo © Captive Media, Exhibit Balham

The one or other reader may be puzzled by the countless applications ‘smart’ toilets have for the last few years been offering in the sanitation market. These high-tech WCs are especially popular in Japan, where cleanliness is an imperative and washing oneself an important and celebrated ritual lovingly performed with great care. For example, the Japanese shower before they bathe in order not to step into the tub dirty. And the Japanese are equally careful when it comes to toilets, even if this never gets mentioned. So-called “Washlets” offer a wealth of digital assistants that turn the WC into a veritable experience: for the senses and certainly for the derriere. Models with bidet and drying functions, heated seats and sensor-controlled toilet lids or even integrated MP3 players that provide the “flush melody” are already standard in the land of the rising sun. And for those wanting more fun there’s the “Sega Toylet”, which Japanese software provider Sega launched five years ago. Users can while away the time playing games on a screen above the interactive urinal – controlled by their own stream of pee.

The “Sound Princess” to be encountered in many a public toilet in Japan has less to do with a wish for entertainment and more to do with embarrassment. It’s an audio function activated when you touch the toilet seat – it plays a flush melody loud enough to make certain no one hears any sounds your bodily functions might make. Moreover, toymakers Takara Tomy Arts have come up with an app that was launched on the Japanese market at the end of 2010 enabling you to take your “Sound princess” along with you wherever/whenever you go.

Some Japanese are not just embarrassed by sounds, but also by medical examinations. The Managing Director of Daiwa, a Japanese medical technology corporation, noticed when in hospital that many patients felt inhibited by the prospect of having to “produce” a urine sample on the spot in a little plastic cup. Japanese manufacturer Toto, now the world market leader for “Washlets”, has therefore developed an “intelligent” toilet for Daiwa that is destined to relieve patients of this unpleasant procedure. “Flow sky” not only recognizes how much you weigh, as the toilet basin also boasts a collection cup that automatically takes a urine sample. The “smart” toilet then measures your glucose levels, hormone levels and possibly inflammation indicators. And it then sends all the data to your doctor via the Internet, where it can be assessed by the relevant software. You can have a remote pregnancy test conducted this way, too. On the basis of the evaluated data, toilet sitters can be offered helpful hints on healthy food and better preventive healthcare. The model is to date only available in Japan where it is, moreover, only used in medical facilities.

Who knows, maybe one day the medically discerning WC will be available for home use, telling you each day how to live more healthily. So be warned: If you duck the session at the sports club and opt instead for a comfy evening on the couch in front of the TV with a bag of potato chips your “intelligent” WC will swiftly notice how leisurely your life was and punish you with a diet plan.

When the urinal keeps you away from the wheel

Not everyone may be so happy about what the WC can tell us about our physical condition thanks to its digital innards. In “Zouk”, a Singaporean club, they’re busy testing a urinal that monitors the alcohol level in your blood and if necessary prevents you from driving home. As part of an anti-drugs drive, in 2013 the local DDB Group ad agency developed the “Thing Magic Astra”, a sensor that is installed at the bottom of the urinal basin. All guests who park their car at the night club have to hand in their car keys, and get a RFID card in exchange. This enables the urinal to “recognize” who is peeing and a sensor identifying the ethyl glucuronide concentration in their urine. If the alcohol content exceeds the statutory limit for drivers, a warning signal sounds on the videoscreen above the urinal and you get the friendly advice to better take a taxi. Meanwhile the warning is sent to the carpark, the barrier there goes down, and the guest is no longer able drive off.

The digital WC chattily reveals our most intimate secrets, well-meaning no doubt, but somehow disconcerting, if not alarming. And we’ve been able to view the final result ever since 1997, in the US sci-fi movie “Gattaca”: In the world it portrays, the each citizen’s skin flakes and bodily fluids are constantly being monitored and analyzed, with those on high deciding over the fate of each protagonist.

MORE on Stylepark:
Read all interviews, articles and news in our special on the ISH >>> 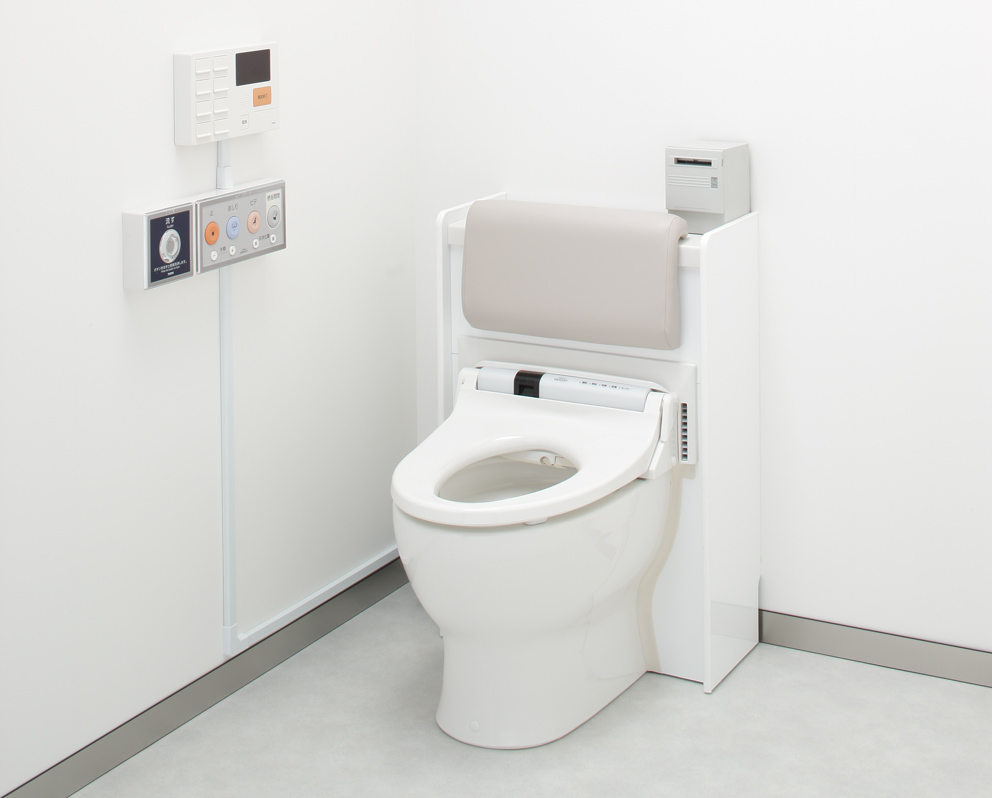 As yet only available for the Japanese market and only for medical institutions: The washlet “Flowsky” by Toto measures the glucose concentration, the hormone level and inflammatory factors in the urine of the patients. The data is sent to the doctor, who then can make a diagnosis. Photo © Toto

With the panel of Japanese Washlets you can control all functions of the WC as the temperature of the water and the toilet seat and the odor extraction. Photo © Armin Kübelbeck, Jet Lib News

The interactive urinal in the nightclub “Zouk” in Singapore has a sensor, which measures the concentration of alcohol in the urine of each guest and decides, whether he is allowed to drive home by car or not. Photo © Gizmag
Advertisement