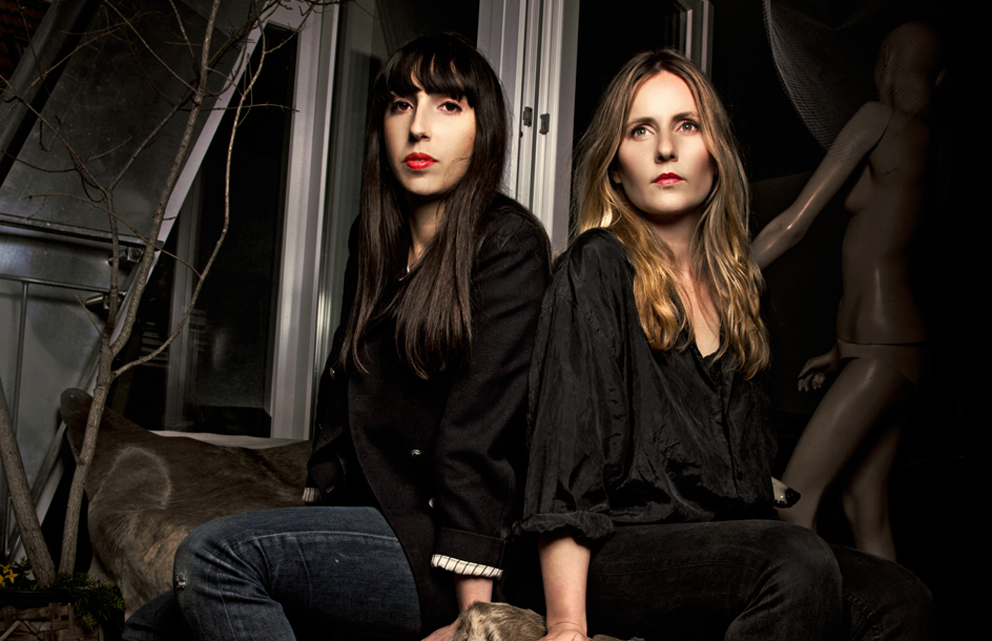 In addition to Kaviar Gauche, Kilian Kerner, Lala Berlin and Vladimir Kareleev Augustin Teboul is one of the most promising newcomer Berlin labels. Franco-German duo Annelie Augustin and Odély Teboul debuted back in 2011 and have since not only impressed the press and jurors at many a competition, but also outfitted the girls at Coco Rosie – and are now part of a show at Frankfurt’s Museum Angewandte Kunst. So what’s the duo’s key to success? Who creates this black, filigree and elaborate robes that are reminiscent of the 1920s and exude such a cool eroticism? Martina Metzner met the two designers at their studio in Berlin’s Neukölln district, where you get greeted by mannequins with marvelously layered hair styles, melancholy background music a la “Antony and the Johnsons” and the expertise of ambitious and excellent couturiers.

Martina Metzner: What did happen that you make so sad and dark fashion?

Based in Berlin, you are also showing at the Fashion Week in Paris. Why did you make this step?

Annelie Augustin: Actually we started to work in Paris, we both studied in Paris. That is the city, where we got to know each other as well. We have one feet in Paris, a sales office and a press agency, because the aim of our brand is to grow internationally. Berlin is a very good base for us although we are not focusing on the German market. We are selling worldwide. At one point you have to go to other cities. Showing in Paris is not the easiest thing, but it’s challenging.

But you won’t transfer your studio to Paris? Because actually you are from Paris, Odély…

Teboul: It is a funny question. Because we started our business in Paris, we won our first award in Paris and we started a French brand also. It is just a personal choice to work here and live here. But it is like Annelie said, one foot here and one foot there. When we launched the brand, we’ve decided to launch it at the Berlin Fashion Week. Here is also a interested public for our clothes. For now it is still very interesting to show at the Berlin Fashion Week but we will do always things in Paris, already we had three events the last three seasons there. For us as a French-German label it is important to keep it.

You are French-German team, showing your fashion in Berlin and in Paris – do you have a woman in mind, maybe also yourself or your friends, when you are creating your clothes?

Augustin: (laughing) Not our friends, no. It depends on how you interpret the clothes, depends on the woman who is wearing them. Turning out it could be something supersexy or more conceptual. We don’t have even a muse.

Teboul: This is a recurrent question. When we create we are quite disconnected of the fashion aspect not in term of clothes but in term of image. When we really start the creative process it is not a finished silhouette on a woman. At the beginning it is very specific and it grows while we are working on a piece to a full image. It’s very experimental and technical and aesthetic – but it is not about the image at the end, how it gonna look like.

Augustin: This is the interesting aspect that black is all in our clothes. The dresses can look supermodern as well very traditional.

Your fashion is mostly handcrafted. In which way you are fascinated by this handmade fashion?

Augustin: Our cooperation between Odély and me is based on this. The first discussion we had were about “what is attracting in fashion?” and “what is disattracting?”. We’ve found this point in common. Step by step we create a handwriting through this handcrafted fashion.

You do a lot by hand?

Augustin: It is a lot of handcrafting. It is not the whole collection, because we are now going to grow more on a commercial way, so we have to find the balance between couture styles and more simple styles.

Working in a team, looking a bit like ying and yang, who makes what?

Augustin: When we met we were very different in our style, what we designed. Since the beginning we try to share the process of designing the pieces, for the rest as well. Sometimes it splits up, Odély do the crocheting for example, I’m working on the leather pieces for example.

Teboul: Because we do the prototypes in the studio, the technical part we share a bit. But we develop the idea together.

How you could develop an idea together? You’re sitting together at the table, one is making a line, and the other one then too?

Augustin: That is how we made our first collection (both laughing). This is the base of Augustin Teboul, for our first collection “Cadavre Exquis”, where we made this game, where you make a little drawing, then you fold the paper and the other continues. It is a surrealistic game indeed.

Teboul: It is more an exchange. Most of the times it develops by doing, , than we get more and more idea how to decline it, to expand it, to reduce it, it is an experiment.

You’ve worked for Y-3, the sublabel of Yohji Yamamoto for Adidas, Annelie. If you look on him and the other Avantgarde-designers who also work most of the time with black like Maison Martin Margiela, Comme des Garçons, you feel any connection to them?

Teboul: It is a funny question. I feel personally more linked to the couture of the 80ies than to the anti-fashion of the 90ies. If I would be just free on something creative it would more go into this exaggeration of the 80ies as of this minimal, deconstructed clothes. But on the other hand, there is something minimalistic in our fashion, to get rid of some stuff. Maybe we are influenced by both. This opulent part of the 80ies, but also like you say Martin Margiela, Rick Owens, Helmut Lang. To choose one color is already “we get rid of one element”.

Are you looking on the world of design and architecture?

Teboul: We are both very interested what is happening in general. It is for sure a source of inspiration, but more subtle. We don’t take a Gaudi-building and make a collection out of it.

Is there a decade of architecture and design you are fascinated by?

Augustin: I like Le Corbusier for his simple architecture. For product design it is more difficult, I like Carlo Mollino for example, or Scandinavian furniture design.

Teboul: I’m more interested in experimental product design that is between art and product. I don’t have a name, making art pieces like weird forks, hair brushes. Architecturewise I’m the fan of Gaudi.

I’ve read in other interview with you that your work is inspired by surrealism. By the whole decade or a specific artist?

Augustin: It is more the idea of surrealism, not so fixed on a period.

Teboul: Artists like Hans Bellmer or Louise Bourgeois, Dadaism we like also. All the imagery based on collage, all the work on dreams, the subjacent ideas of incoherent message. That doesn’t mean that is our only source of inspiration. There is something heuristic about it. There is something we found in common.

If you could design a house and the interior of it, how would it look like?

Teboul: It is hard. Would it look like here (the studio, editors note) or very much like our clothes? It is difficult to decline the clothes to a house. Probably it would be all black? Maybe it would be good first to design a shop and then a hotel.

Augustin: It is too hard to answer right now. It is a funny idea to think about.

You’ve launched the brand three years ago, meanwhile you are one of the shootingsstars from Berlin’s fashion scene. What does it change in your life and work?

Augustin: For our work it is positive to have so many eyes watching, what we are doing. On the same time it is a lot of pressure, you have to be creative again, and again, and again.

Teboul: It is a mix of fear and excitement. This rhythm, two peaks per year. On the other hand when you have your own label, of course it is difficult, but you are much more happy.

Did you reached the point that you can live from your job?

Augustin: We can’t completely live from it. It depends how you want to live. Afterwards it could be fun for only a few years, then it has to come to a point where you can live from it. We have to push more sales.

Teboul: The collection is growing, we have almost 70 pieces with accessories. When we’ve started we had 25 pieces. After six seasons we’ve tripled the amount. This is something to work on because we reach more shops with more commercial, accessible pieces. Now the shops that buy our pieces now, are still very specific.

Final question: If you could turn the time ten years into the future…

Teboul: Not to scary? Maybe just a big building. Growing international, earning money, a big team. Able to relax a bit with the money. Being still able to what we love to do. Maybe to do a couture collection.

Maybe also a collection for men?

Augustin: Why not? On the beginning we had this in mind, but we wanted to focus on women. Let’s see how it grows. Nothing for sure. 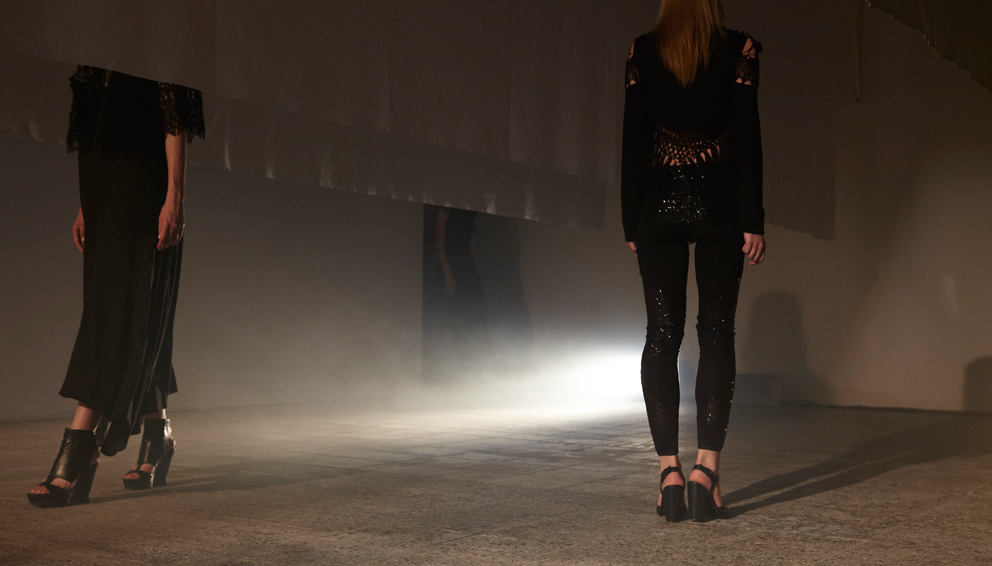 Mystic moment: During Berlin Fashion Week 2013, the show for summer 2014 by Augustin Teboul was run in a former supermarkt. Photo © Dunja Antic 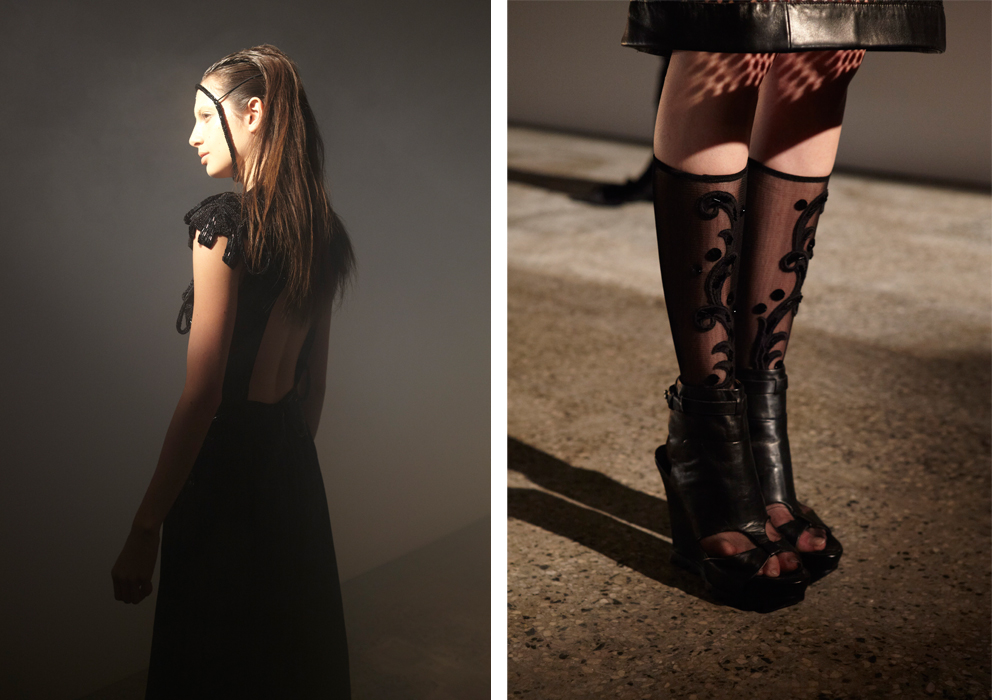 With „Holy Me“, like the collection is called, the both strengthen the outfits with rich details like head- and face-decoration and accessoires for hands and legs. Photo © Dunja Antic 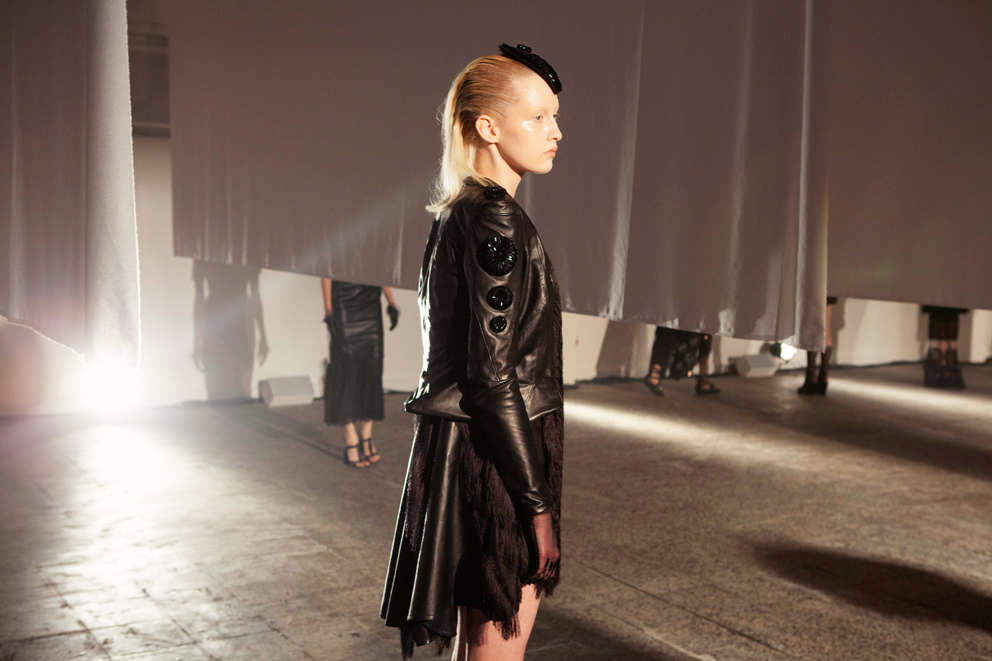 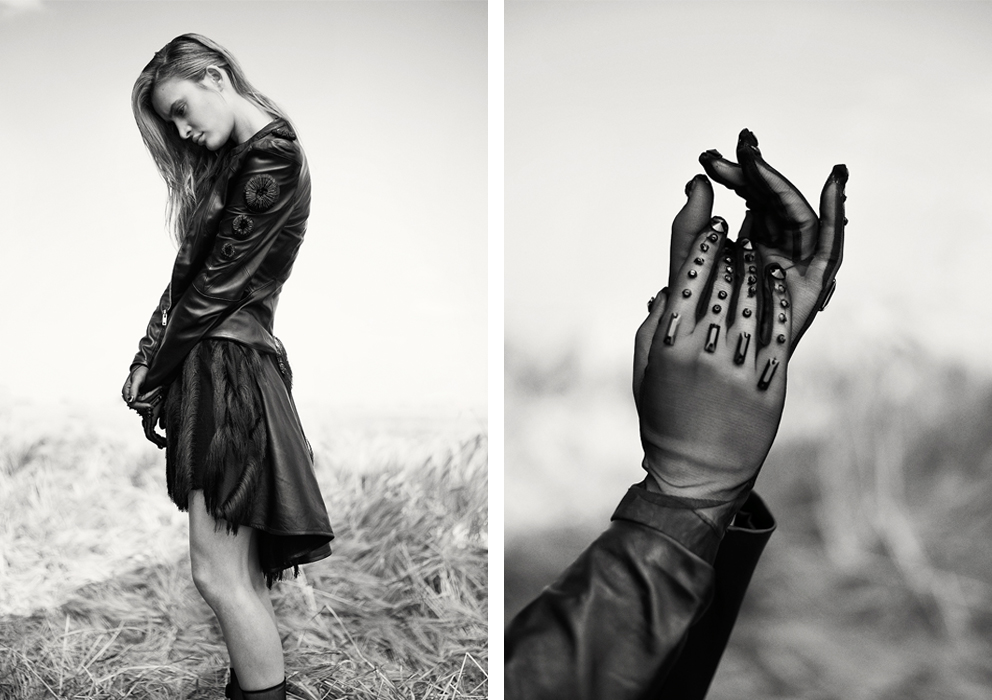 ....and in the mix to soft, delicate accessories and textiles it reduces its strength. Photo © Stefan Milev 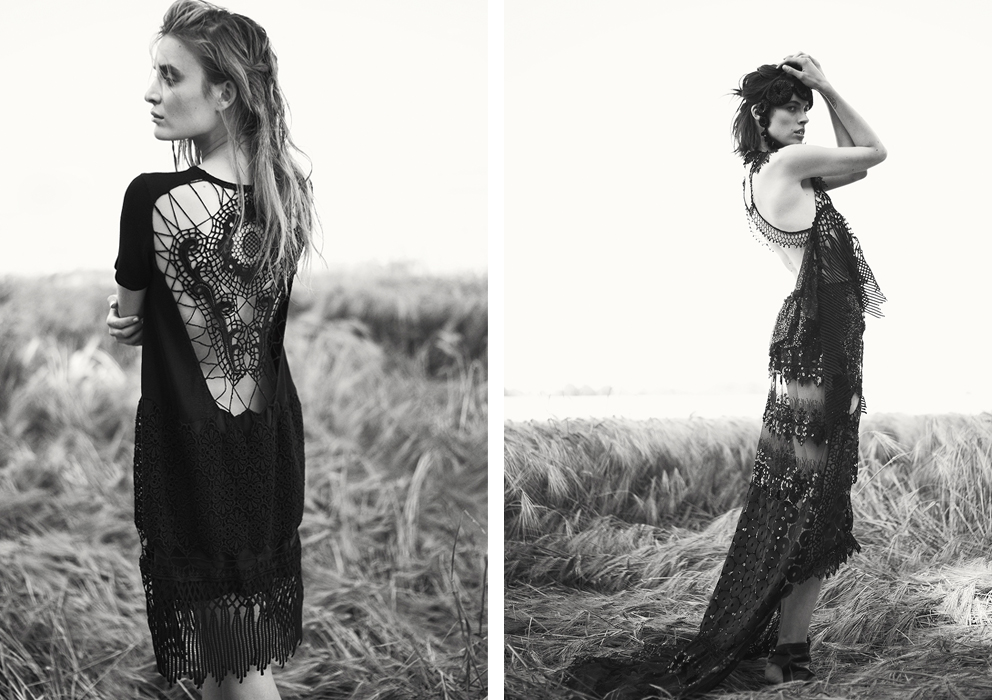 Beautiful like Scheherazade due to ornamental crochets and paillettes. Photo © Stefan Milev 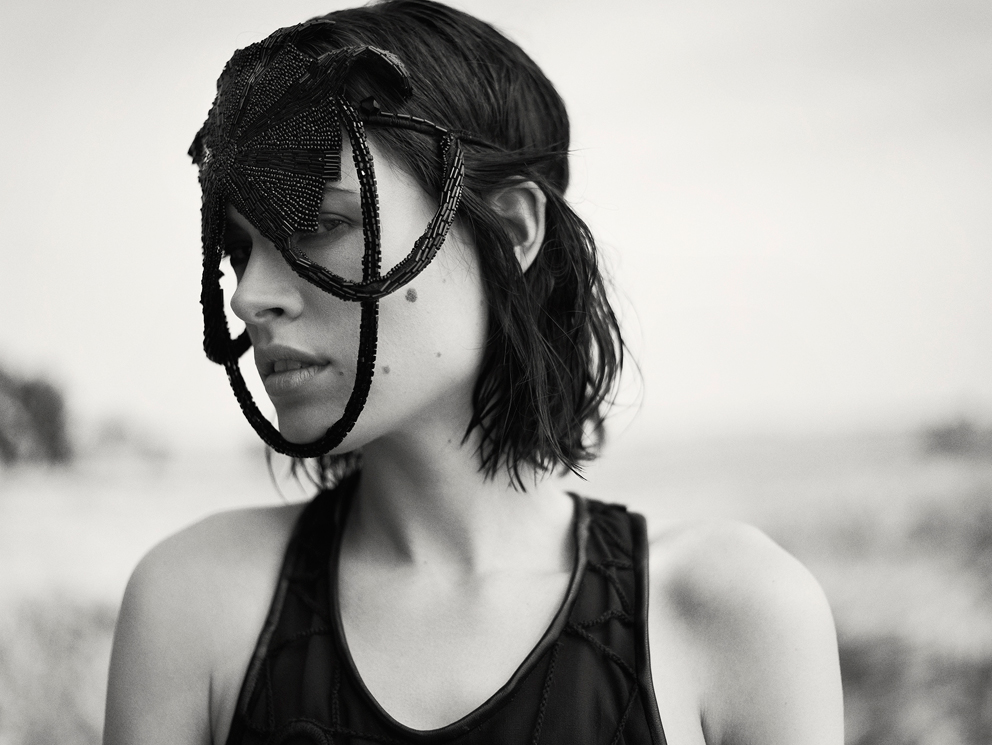 Idiosyncratic and mysterious, so the various creations of head- and face-jewellery. Photo © Stefan Milev 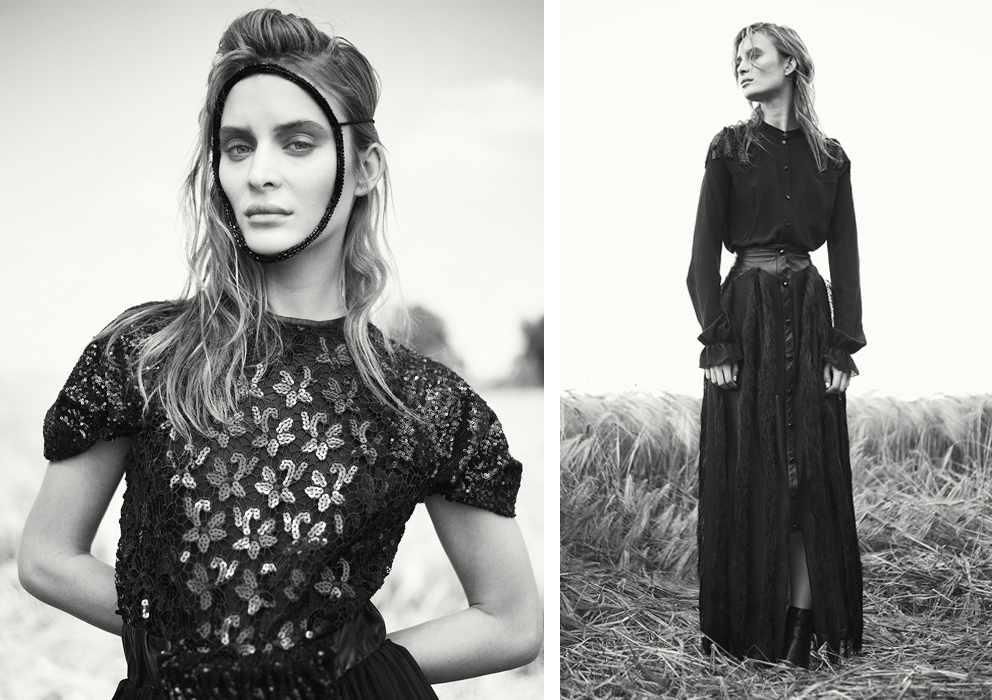 Behind the glam there is a lot of handcrafting that are made by Annelie Augustin and Odély Teboul in its studio in Berlin. Photo © Stefan Milev
Video for the collection "Somewhen", fall/winter 2014 © Augustin Teboul
Advertisement