Since 1999, Andrej Kupetz has been at the helm of the “German Design Council”. Never before did the institution have better financial resources, namely thanks to its activities. Public grants, always modest in scale, are now limited to single projects. At present the Counciul Foundation has some 180 members from inscie and outside the country, ranging from design studios through SMEs to a global automobile group, with a collective payroll in excess of 1.8 million. The German Design Council’s current activities and focus are well known, so, to mark its birthday, a few quotations from its history.

From the late 1940s onwards, various institutions took part in setting up the “German Design Council”, such as Deutscher Werkbund (refounded after the war), various leading individuals, as well as political parties and the German Federal Government. On April 4, 1951 German Parliament resolved the following after a motion placed by the opposition Social Democrats: “The German Federal Government is requested, with a view to the competitiveness of German industry and the crafts trades and in the interests of consumers to support all efforts that seem suitable to secure the best possible form of German products. We recommend that a non-civil-service Council for Form Development (sic!) be appointed from among the ranks of manufacturers, retailers, trade unions, artists and the applied arts and above all also from among consumers, educationalists and publicists. This Council of Form Development shall be furnished with the requisite funding and institutions as the basis for its work.”

Not only by virtue of his office, but also thanks to his interest in modern art and architecture, Ludwig Erhard, who from 1949 to 1963 was German Federal Minister for Economics, was one of the initiators and patrons of the Design Council. He pointed to shortcomings, critically remarking on “the inadequacies of German products in terms of taste”. The first trade-fair participations by German industry in New York and Chicago were generally regarded as disastrous: “Despite recognition for their technical perfection, they do not meet modern standards in terms of design.”

German Federal President Theodor Heuss championed the new institution, having been MD of the Werkbund in 1918 and having published a brochure “On Quality” in 1951. Heuss wrote to Federal Finance Minister Fritz Schäffer a letter on 12 July 1951, requesting financial resources for the future German Design Council: “I would like to inform you that it is my very old and firm conviction that in this sphere a free government contribution will make sense not only fiscally but also economically in the long term.” The Federal Economics Minister allocated 70,000 deutschmarks for a budget to “promote rationalization and standardization in the economy”.

On October 13, 1952 the Council for Form Design was constituted by the Federal Ministry of Economics in Bonn; the foundation was entered in the Hessen Register of Foundations, which recently celebrated its 60th anniversary, on June 5, 1953. With a degree of pathos Arno Hennig, a Social Democrat and Chairman of the German Parliamentary Cultural Committee, looked back on the tasks of the German Design Council:
“If the Council should concern itself with the right shape of our consumer goods, then this love of form would not entail external aestheticism, but be the appropriate expression of forces that will assist people to enjoy the dignity of human life and the most just and fertile form of coexistence.”

In 1982 Inez Franksen, who ran the Berlin interior design store “Modus”, went to Stuttgart to interview Mia Seeger for the magazine “Werk und Zeit”. Seeger was Managing Director of the German Design Council from 1954 to 1966, was able to draw on experience as a staff member on the team for the Werkbund exhibitions “Die Form” and “Die Wohnung” in 1924 and 1927. She had worked in the 1930s for the State Trade Office in Stuttgart and had come into contact with the most important European presentation, the Milan Triennale. Want she found unnatural, Seeger said in the interview, was “the prior trimming of a project to ensure it disturbed no agency of government. No. All those assurances simply caused immobility. When I joined the Council I was pretty courageous. I had an annual budget of 65,000 deutschmarks and a file. When I left we had 220,000 deutschmarks and 11 staff members, a large library, a slide and photo archive with many thousands of images, even development series. (…) It obviously wasn’t spectacular, but that I didn’t want. I wanted people to know that if they wanted to find something they only had to come to us to look.”

The most important foreign presentations the Council helped organize and support included the German Pavilion at the World Expo 1958 in Brussels. Architects Sep Ruf and Egon Eiermann designed the pavilion, and together with them, the Council devised the interior and the themed shows. Preparing the exhibition, Eiermann wrote in 1957 to the Commissioner of the German Pavilion:
“… other than one matter that causes severe concern for me and Mr. Ruf. I read there about an especially valuable wooden item for an ostentatious group of seats that is to consist of a heavy table and armchairs with leather covers. The term ‘ostentatious’ is highly dubious, and there is no reason why ostentation is linked to a ‘heavy’ table and armchairs with ‘leather’ covers. We advise strongly against this!
Yours cordially! Eiermann“

In the 1960s, the debate on design was still stimulated in key aspects by the Werkbund. In 1965 it convened at Berlin’s Academy of Arts, with addresses by Max Bill, Ernst Bloch, Günter Grass and Walter Jens, et al. Theodor W. Adorno spoke “Functionalism Today”: “One could imagine as the vanishing point of developments that things that are very useful lose their coldness. Not only humans would then no longer suffer from the world resembling an assemblage of object; the things would also, having fully found their purpose, be liberated from that object status. Yet all things useful are distorted in society, bewitched. The lie is that things are made to appear as if they were there for our sake, while they are produced for profit, only satisfy needs coincidentally, trigger these in line with profit interests and prune them accordingly.”

From 1969 onwards, the German Design Council organized the “Federal Prize for Good Form” on behalf of the Federal Ministry of Economics. The catalogs were terse, rarely more than 100 pages, and contained interviews and essays on the theme of the contest, set each year anew. In 1973 the theme was “Basic Residential Needs”. Bazon Brock commented: “If young people today no longer outfit their apartment as a living environment with objects, then they would seem to overlook a basic condition of coexistence in society. That precondition is: One needs to reveal oneself, at least cursorily, to one’s peers. One needs to offer one’s peers and partners a point of identification. One is prompted to do so not only in one’s own four walls, but also on the street; most people use clothing, facial cosmetics, a hair style, ways of behavior and above all things as the linguistic gesture of such points for identification.”

A little less than 10 years later, Lucius Burkhardt declared the “old Good Form” dead. Herbert Ohl, Technical Director of the Council, had just developed a new, ostensibly objective method for evaluating design. To this end, he used a broad range of criteria and had a computer calculate the averages. The idea: to make certain jury value judgments would henceforth be freed of the stigma of subjectivity. Ohl presented his methodology in 1977 and summarized: “Design has already become a commonplace. The taboo or the precondition of so-called good taste has been broken. Design has become quantifiable, and quantifiability means it can be learned.” Magazine Der Spiegel opined, by contrast, in 1969, that the “Council” was extremely little known “and thus so is the damage it can do.”

“In the afternoon, a queue of people stood patiently waiting 200 meters from Hochhaus des Internationalen Handelszentrums in East Berlin,” reported “Spiegel” in 1984. The reason for the masses: The exhibition “Design – thinking in Advance for Mankind”, for which the German Design Council had selected 180 West German products, both consumer and capital goods. In his preface to the exhibition catalog, Philipp Rosenthal, from 1977 to 1986 President of the Council, “Design is thus not irrational. It can be rationally explained both as a whole and in terms of the details. Likewise it can and must be critically examined. This exhibition invites viewers to do just that.”

Not a designer, not a Werkbund functionary, but literary scholar and sociologist Michael Erlhoff it was who from 1987 to 1990 was MD and Technical Director. The Council moved house from Damrstadt’s art nouveau Mathildenhöhe to the trade-fair grounds in Frankfurt/Main. Erlhoff hosted lectures and exhibitions on the history of the Hochschule für Gestaltung in Ulm, organized shows that toured abroad, among others in Japan and the United States. And he transformed the Council’s press clipping services, discontinued in 1984 (the “Design Report”) into a magazine. In the collection of essay published in 1988 and entitled “Gold oder Leben, Aufsätze zum Verhältnis von Gegenstand und Ritual” he wrote: “What we sometimes believe we most simply control in design is actually one of the most inconceivably complex areas, namely the world of objects. While our dreams repeatedly tussle with such objects and our presumed identity as individuals in part arises from our opposition to them, the objects themselves fall through our fingers the moment we try and capture them in theory.”

The German design Council’s activities include honoring renowned and distinguished individuals. In 1995 Swiss sociologist and economist Lucius Burckhardt won the “Federal Prize for a Promoter of Design”. Dieter Rams, who from 1987 to 1997 was President of the German Design Council wrote in accompanying publication “Design = unsichtbar”: “1980 saw pulication of the essay ‘Design ist unsichtbar’ [by Lucius Burckhardt], that while not defining my own thought certainly reinforced it. Here, too, I can well imagine that other designers feel the same. What reinforced my approach, for example, was Burckhardt’s conviction that good design requires contemplation, arises out of contemplation. And by contemplation I mean an enquiring, unprejudiced, cautious approach that also keeps a watchful eye over itself, as opposed to an approach that marches forward relentlessly looking for solutions. Contemplation forges links, renders the reality and the impact in the background visible.”

For an extension account of the groups, associations and ideas that influenced “Produktgestaltung in Westdeutschland nach 1945” and thus the early days of the German Design Council, see the Ph.D. thesis by Christopher Oesterreich “’gute form’ im wiederaufbau,” (Berlin, 2000) 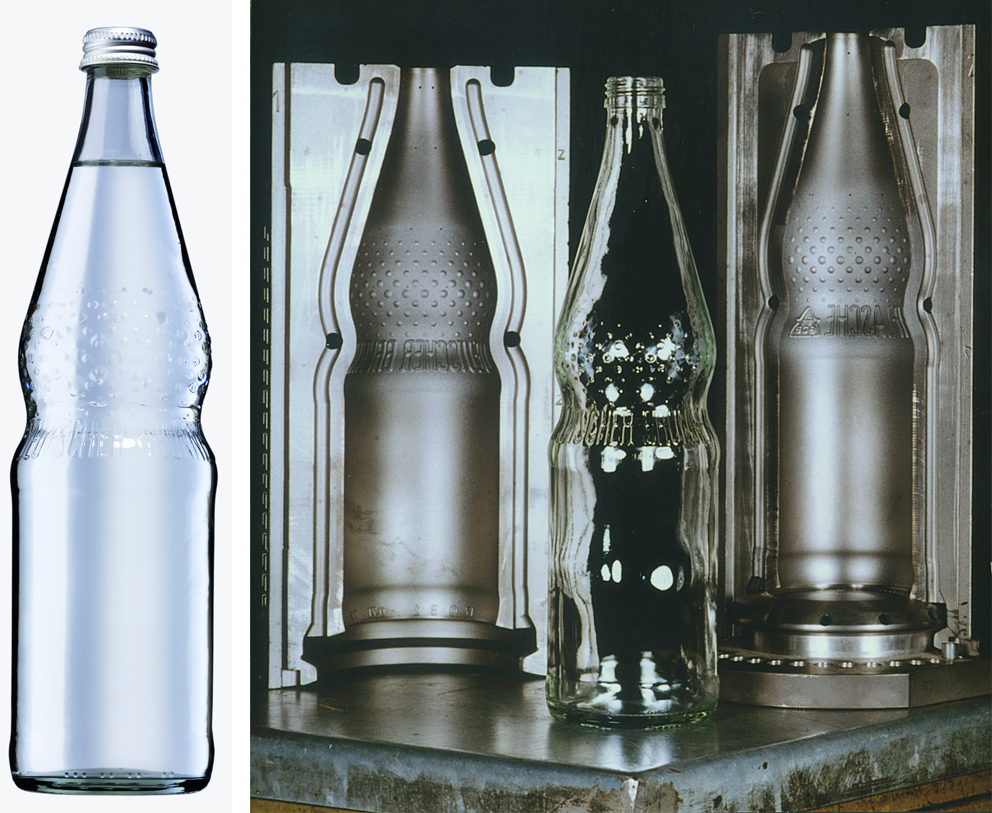 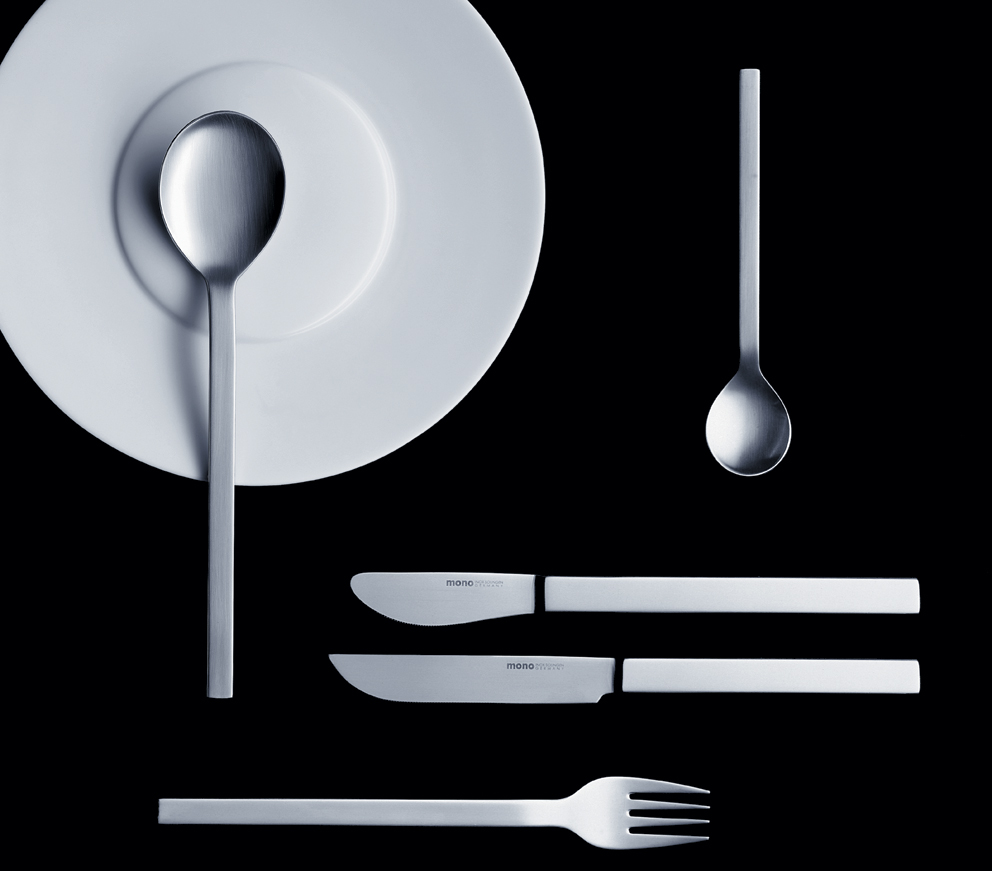 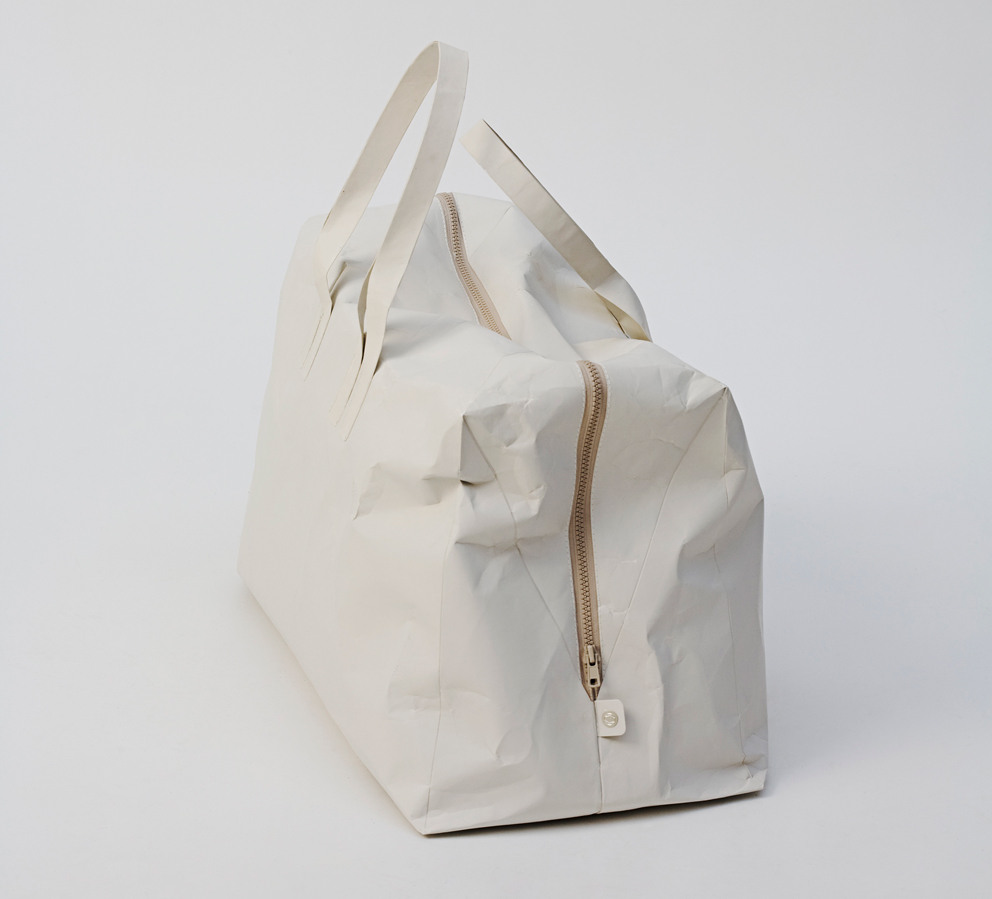 The "paper" bags by Saskia and Stefan Diez are made ​​of Tyvek ®, a synthetic paper that is extremely lightweight. Photo © Archiv Rat für Formgebung 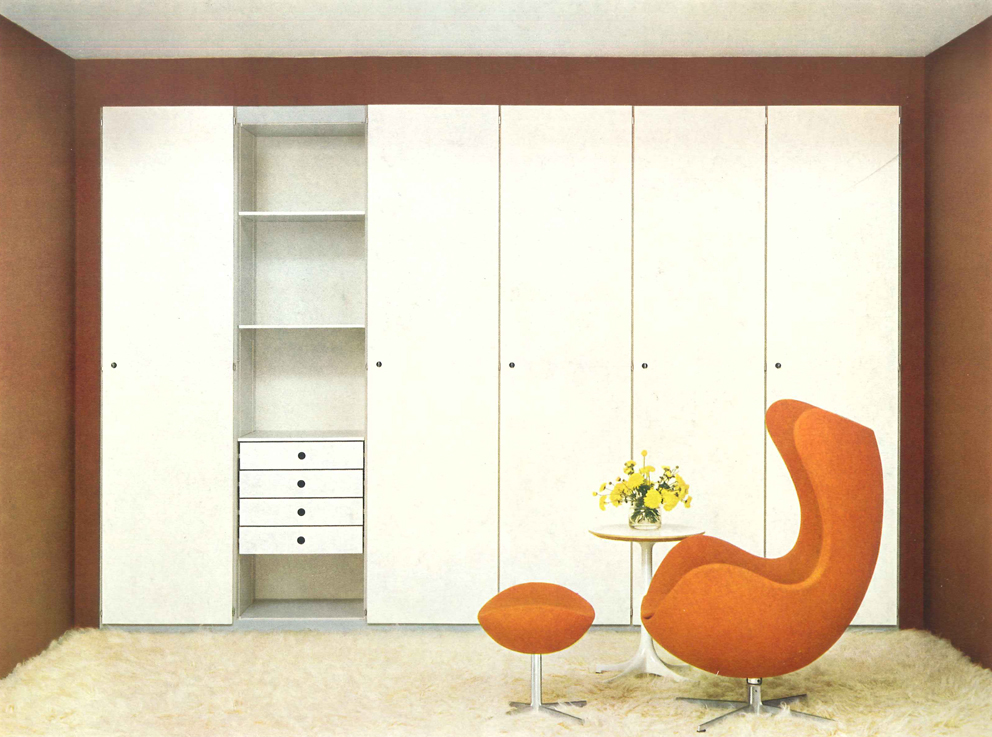 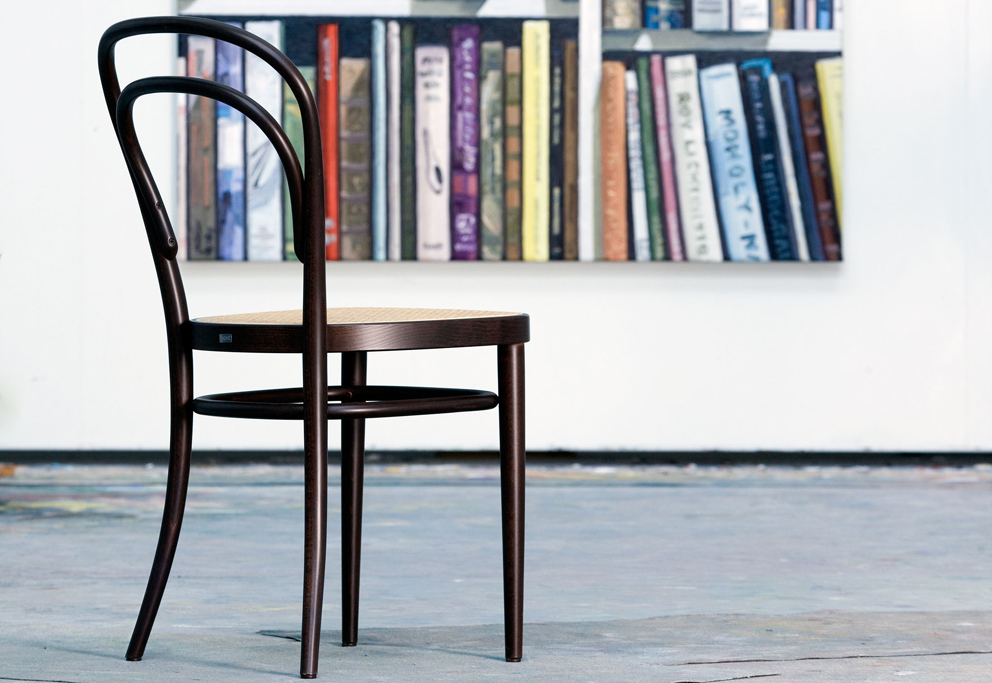 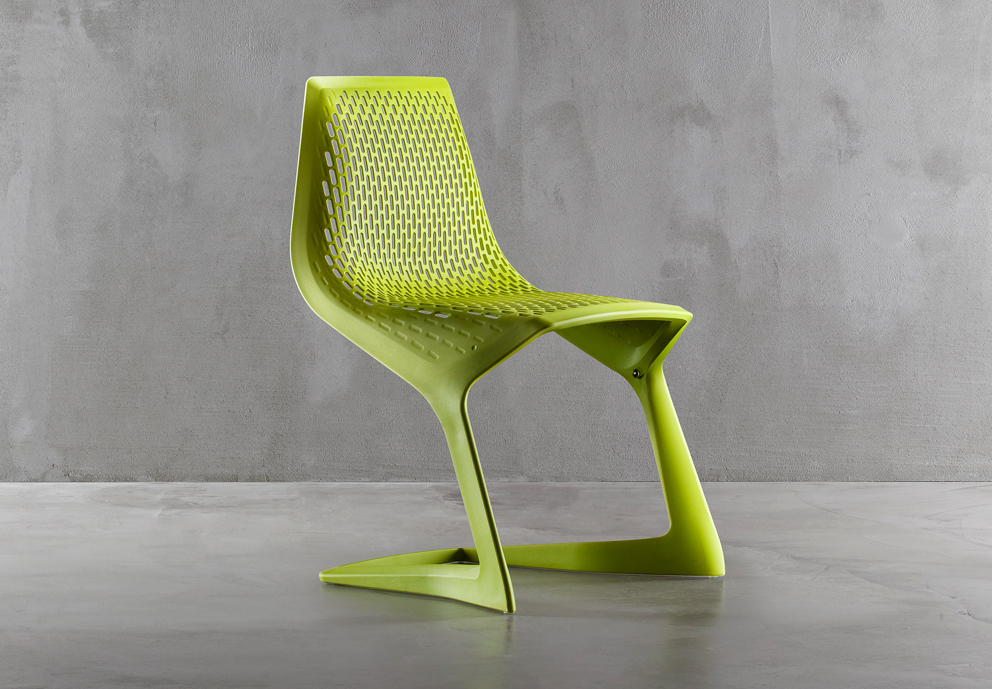 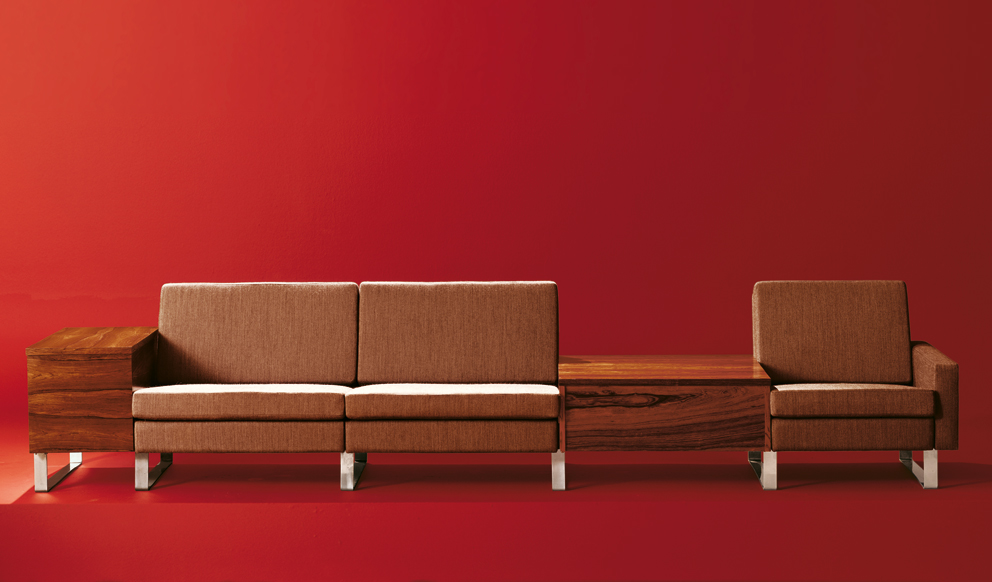 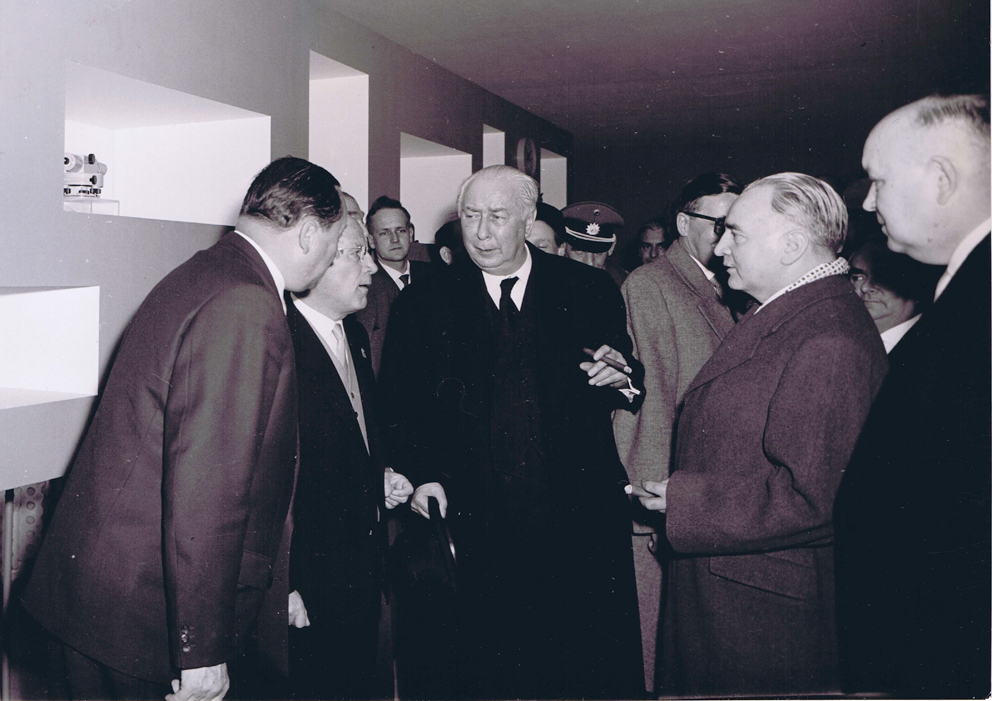 Round tour with Theodor Heuss at the Hannover fair special show in 1958. Photo © E.P.A. 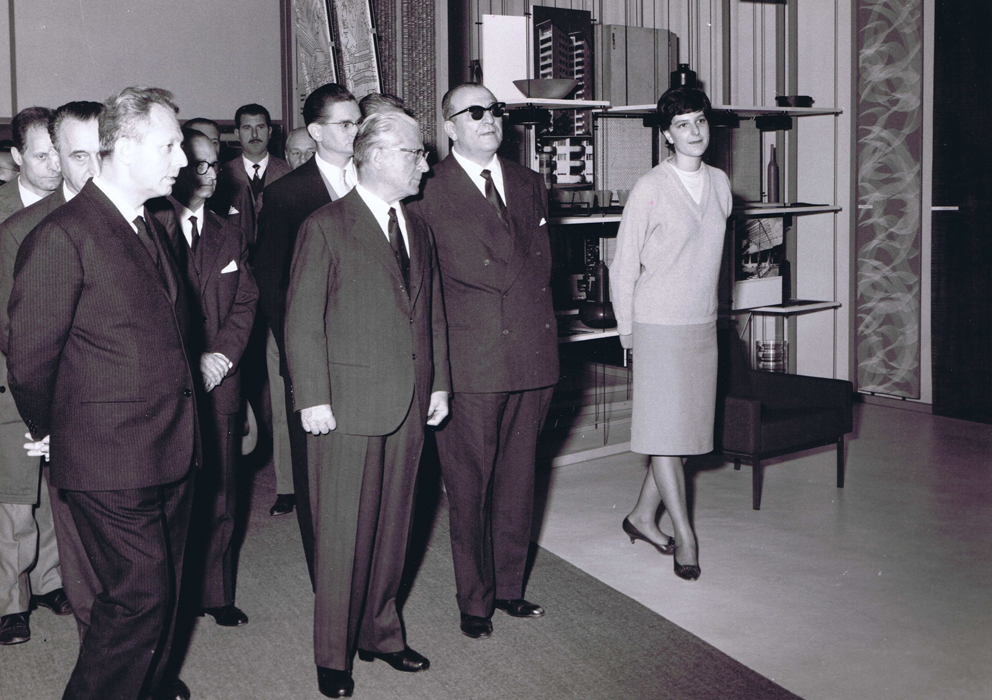 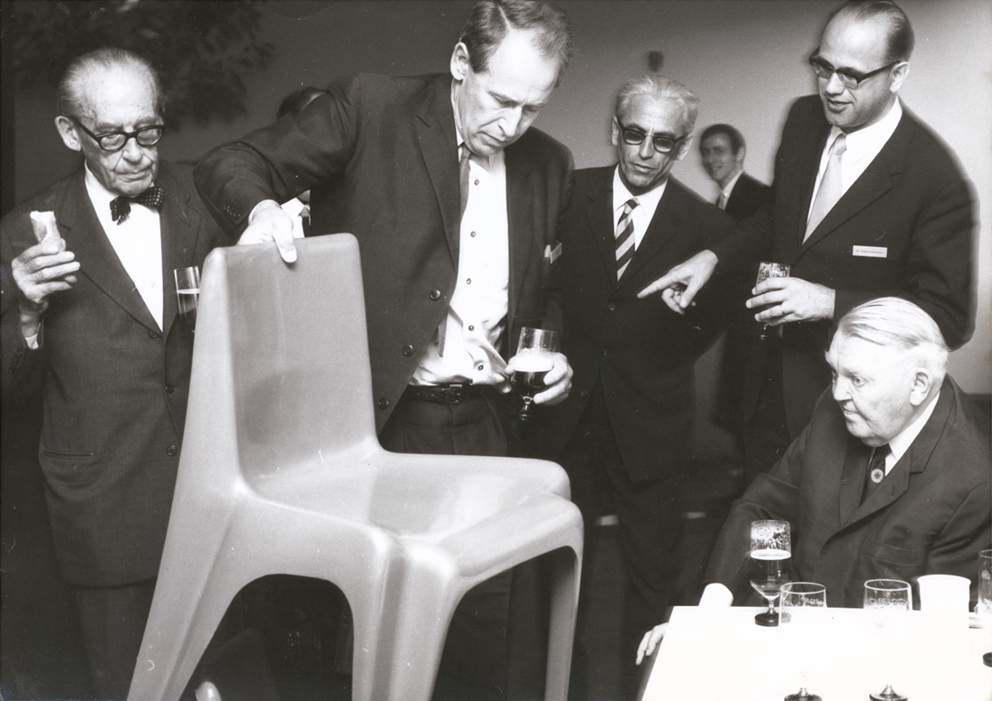 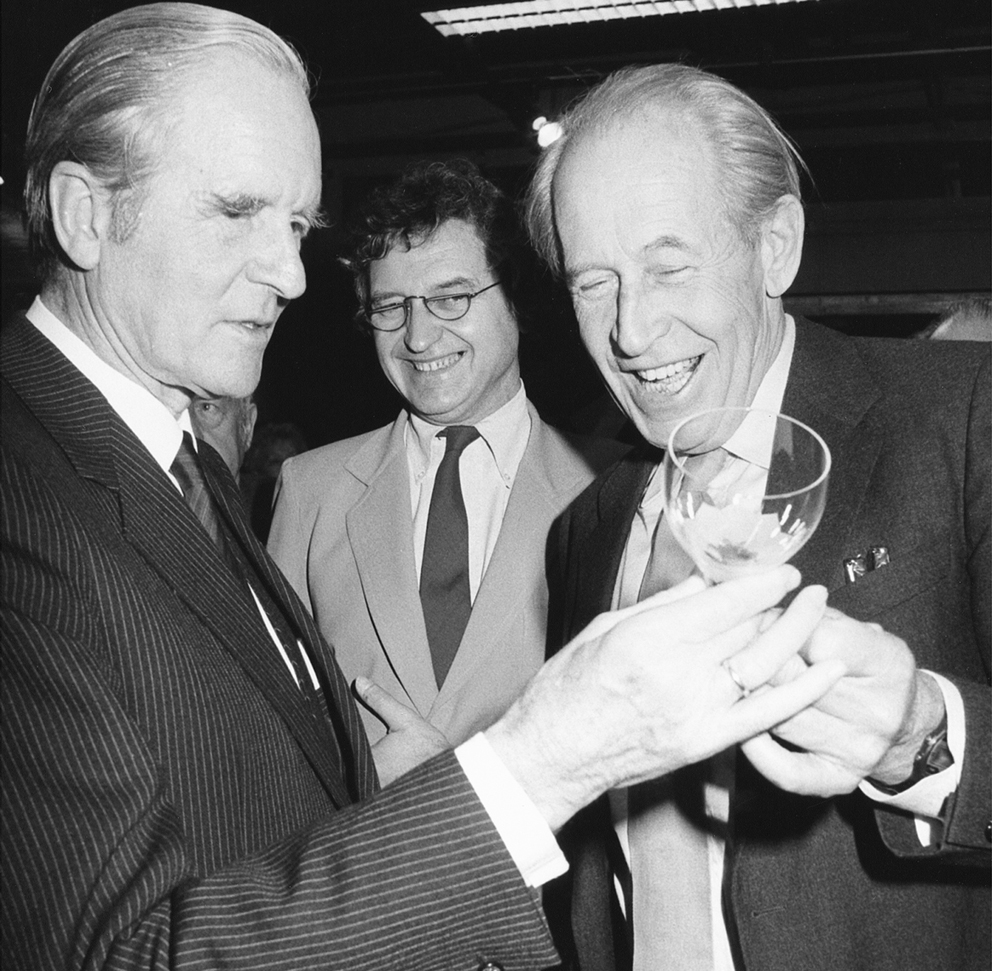 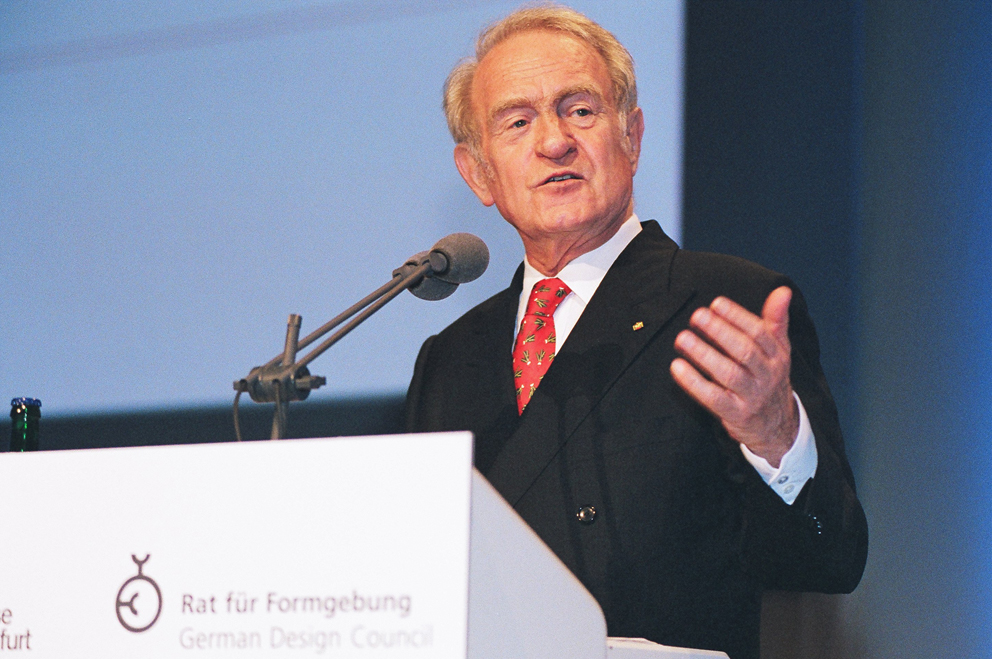 German President Johannes Rau at the award ceremony for the Design Award of the Federal Republic of Germany 2002 in Frankfurt on the Main. Photo © German Design Council
Advertisement