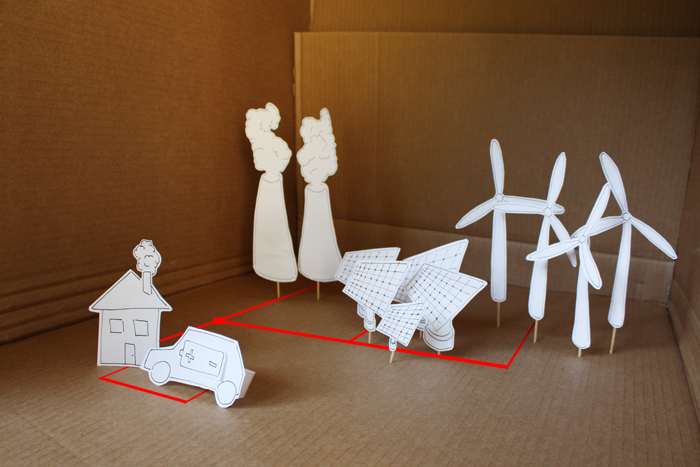 Dare to look into the future? Each of us will drive an electric car, will charge it overnight, while at the same time the washing machine runs because electricity will be cheaper at night. How to secure power supplies during such peak periods? Claudia Beckmann spoke to David Dallinger from the Fraunhofer Institute for Systems and Innovation Research, who works on the technical and economic sides to electrical mobility. They discussed how the electric car of tomorrow can be integrated into renewable decentral energy systems.

Electric vehicles are charged using electricity from a power socket. Will this additional demand for electricity not result in problems with the energy supply?
Dallinger: No, not initially as there are very few electric cars in Germany so far and market penetration by these vehicles will require a lot of time but also a lot of staying power as regards improving the technology. Moreover, electrically powered vehicles are more efficient than their conventional counterparts. That means less primary energy will be needed than is employed today for conventional fuels. Over a year one million vehicles need less than one percent of the total energy produced in Germany.

But if we assume that electric vehicles will achieve a higher market penetration then won't this increase the expected load on the electricity system?
Dallinger: The peak load is likely to increase especially if many users of electric vehicles want to recharge their batteries simultaneously. A typical example of this is recharging batteries on a weekday when many people come home around the same time and hook their vehicles up to the network. However, the connecting of electric cars for charging is not a problem for most of the distribution networks in Germany at the moment as it is already the case that networks are already designed to cope with large numbers of consumers simultaneously using devices that have similar power requirements. Large numbers of researchers in Germany are already working on how to better exploit the capacity of power plants and deal with possible bottlenecks but research efforts are also directed at how to shift the power needs of electromobility to the night time hours.

Does not precisely this shift to lignite-fired power plants coming onstream and thus meaning that the eco-balance of ecletric cars will in part be worse than that of conventional modern vehicles?
Dallinger: Yes, as things now stand this really is the case. However, we expect that a future electricity system will rely on high proportions of renewable energies. You can only achieve a fundamental improvement of the ecological balance of cars by using renewable energies. In particular, electricity from wind and solar energy is intermittent and consequently requires a flexible approach to the electricity demand, which could be realized by electric cars. In other words, electromobility can help in future to better integrate renewable energy into the system.

Energy efficiency and renewable energies are also a key topic in the building sector. Do options exist for using electromobility for decentral applications?
Dallinger: Whether and how practicable it will be to link electric vehicles to the energy supply of buildings is a fascinating topic which leaves a lot of scope for creative solutions. Today, individual innovators already exist, who use their photovoltaic plant to supply their own vehicle with clean electricity. And, thanks to the Renewable Energy Act (EEG), since 2009 those people that even get subsidy payments. But other feasible applications for the future are heat-power cogeneration, emergency power supply or the reduction of peak loads in trade and industry in combination with information and communication technology.

David Dallinger is a research associate at Fraunhofer Institute http://www.isi.fraunhofer.de/".
In his work he focuses on technical and economic aspects of electro mobility, energy system modeling and the integration of fluctuating manufacturers.

To read more about electromobility, please click for part one "mobility concepts" and for part two "charging infrastructure".