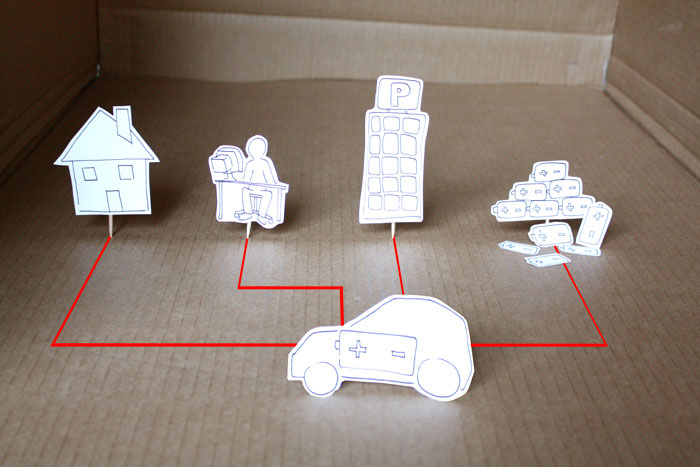 The auto's future is inextricably connected to batteries. And to power sockets. What sounds so plausible and developed in the media and at press conferences, is far from ready, and instead the major challenge we face is to develop electromobility: in the form of powerful batteries. Claudia Beckmann spoke to Fabian Kley from the Fraunhofer Institute for Systems and Innovation Research, who focuses on how the energy sector assesses new technologies, and discussed the charging infrastructure necessary for eMobility.

Today's vehicles carry fuel in the form of petrol or diesel; on a full tank they can travel distances in excess of 500 kilometers and can fill up at a gas station in just a few minutes. But what are things going to be like when we are driving the electric vehicles now being discussed?
Fabian Kley: First of all there are various grades of electrification. There are hybrid vehicles, like the Toyota Prius, which is already available and which recovers the electrical energy for example from braking energy and releases it again, in particular when starting to roll again. Vehicles like these only need a small battery - the tank size corresponds to that of a fuel-based vehicle. On the way to pure electromobility there are different degrees of hybrid systems. With the so-called plug-in hybrid, which relies on a larger battery that can also be recharged by connecting it to the mains, the proportion of the journey covered using electric power is increased. Purely electric cars do entirely without help from a combustion engine, in other words you have to fill them up and charge them up.

What does that mean for the way electromobiles will "fill up" in the future?
Kley: Batteries store less energy than one carry in the form of fuels and recharging takes longer than filling up today. As a consequence we are going to have to change the way we traditionally "fill up": irregular stops to fill up will be replaced by regular recharging when parked. At Fraunhofer ISI we studied mobility patterns in Germany very closely. Large sections of the population almost only ever travel distances that are less than 100 kilometers by car, have a parking space at home and could recharge there. In other words, electromobility is possible using the existing infrastructure. As far as the other section of the population is concerned the aim is to provide more charging opportunities. But there is also a case for hybrids in several segments in which purely electric cars cannot establish themselves.

What form is this charging infrastructure going to take?
Kley: Roughly speaking you can divide it into four types: (a) charging at home, (b) charging in semi-public areas, which for example includes charging at work, (c) charging in public areas, for example charging facilities on the interstate or in public places and lastly (d) charging by replacing the battery. Of these, charging at home is the best value for money, public charging stations and replacement concepts come off far worse economically. This means that to charge their batteries consumers will use their domestic infrastructure as frequently as possible. For the few long journeys quick public charging stations will enable them to reach their destination.

What are the biggest challenges with regard to the charging infrastructure?
Kley: As opposed, for example, to hydrogen-based mobility, as far as the infrastructure is concerned everything we would need to use electric cars in everyday life is actually already in place. An important aspect, though, is getting people to actually do precisely that. Even consumers with regular driving profiles and domestic charging facilities need to be able to go on longer journeys. And this requires charging opportunities outside their own four walls. Sociologists, economists, and urban planners are currently looking into how many of them there will need to be and where they should be located. Once we are further down the road with regard to these questions and are able to describe the requirements more precisely it will be up to designers and architects to come up with design solutions for the future of electromobility, and for charging stations.

To read more about electromobility, please click for part one "mobility concepts" and for part three "energy systems".