The Pavilion at the Serpentine Gallery in London's Hyde Park has, in recent years, always been able to be adduced as a measure of innovative enthusiasm and creativity in the English capital. Every year a well-known architect is given the job of building a temporary structure here. There is only one condition: he or she must not yet have built anything anywhere in the Britain Isles before. Thus, in the last few years, people have been able to see some exciting and surprising designs by Daniel Libeskind, Oscar Niemeyer, Toyo Ito, Zaha Hadid, Rem Koolhaas, Olafur Eliasson etc. And this year? None other than Frank O. Gehry, whom one might almost already call a past master of deconstructivism. And so he has created a thoroughly understated and self-effacing structure of wood and glass, more canopy than pavilion. It is not only Gehry's first project on English soil, it is also his first cooperative venture with his son Samuel Gehry. Nevertheless, not a Gehry that one is likely to retain in one's memory. Solid, established but not really anything more.

Things are rather similar with the design fair, 100% Design, still by a long chalk the most important in the British Isles. Traditionally, architects and interior architects make their pilgrimage to the now somewhat shabby halls of Earl's Court, and in recent years it has also always been possible to find this or that new product and innovation - and in particular from smaller firms as well. Not so this year. Respectable mediocrity everywhere, few leading design labels, hardly any Italian companies, unknown accessories manufacturers alongside uninspired joint stands. 100% Materials, which has been built up with a great deal of effort over the past few years, was this time significantly under-represented and spilled over into the 100% Detail show which was a repository for whatever could not be exhibited in the main hall. In the middle of all this, there, suddenly, is Tom Dixon with a polished performance and a show that pushed the products well into the background. Dixon is, as Art Director of 100% Design, also responsible for the selection of exhibitors and the overall staging of the exhibition - the time available for this seems to have been very short.

And yet: no matter whom you speak to, there is a buoyant mood, right from the first day there are lots of architects, interior outfitters and press representatives in the hall, and there are contented expressions everywhere. "No, it is not about selling here" explains the boss of a Swiss manufacturer, "it's more about being here and establishing contacts".

In parallel to the trade fair there is the London Design Festival which goes on throughout the whole city, with a wide variety of institutions such as museums, galleries etc. taking part. At the same time, the Fashion Week, which is so important for London, also takes place. The main venue for the Design Festival is the former Truman Brewery in the East End. This is where the Tent London event took place again this year, bundling together a host of events and exhibitions; it is the successor of the 100% East of previous years.

The organisers of Tent London are a kind of event council, founded by Ian Rudge, instigator of 100% Design and by Jimmy MacDonald who initiated 100% East. Rudge took the 100% Design show from its origins in a tent on the Kings Road to being an internationally renowned trade fair, with offshoots in Tokyo and Moscow. His counterpart MacDonald turned 100% East into one of the highlights of the London Design Week 2006. With Tent they have, together, now created a platform which gives young designers the opportunity to break into the international scene.

What has emerged is an eclectic mix of young designers from the most diverse stylistic backgrounds. Art, architecture, graphics and product design - disciplines are all mixed in together here. That is also, perhaps, the greatest service that Tent offers: encouraging an interdisciplinary approach and thus showing young designers paths that lead beyond mere industrial design. Even if there was little that is really exciting and new to be discovered here, there were at least a few pieces of work which were interesting and turned up some new ideas; there was, for example, the glass fibre chair, "Zilla", by Diplomat with its foot-stool, the table and chair collection "Balloon Furniture" by Niels Schuurmans, which resembles the knotted creations of a balloon artist or Tom Price's "Meltdown", chair designs, for which he pressed a heated shape, which was always the same, into different bales of material, such that through the heating and subsequent cooling process a seat shell emerges. With this technical process Price creates an interesting contrast between the baked seat and the materiality of the substances in each case.

Also part of the Design Festival is the Designersblock, which took place this time in Covent Garden, right in the heart of London. Over an area of a good 1800 square metres, sixty British and international designers presented their work on four floors. Amongst the most interesting projects were new products by Taschide - two young German designers, whose exhibits included cushion seating with a variety of filling materials, which sported wonderful knitted covers, and whose form and structure are reminiscent of sea urchins.

Six designers responded with very different approaches to the question of how one could replace the broken seats of six Thonet bentwood chairs: Amos Field Reid, Steve Clutton, Jess Corteen, Markus Kayser, Rentaro Nishimura and William Warren designed seats in leather, ceramics, a piece of worked plywood, a polished, reflective nickel surface, a three dimensional creation of folded paper, and an upholstered seat. All designs took into account the history of the Thonet company and added to this classic design a new, sometimes serious, sometimes ironic touch.

And in the midst of all the design projects in Covent Garden, suddenly there is a young Korean standing next to me with some gruesome stickers, inviting me to a horror party in Seoul. Korea did everything it could in London to turn the attention of the international design community towards the east: it made its presence felt with numerous design platforms and exhibitions. Seoul has, after all, been chosen as the 2010 World Design Capital. At the fair itself, in the 100% Future section, in the Designersblock and at Tent - Korean design was represented everywhere in London over these few days.

Among the nice little surprises during the Design Festival was the opening of the group exhibition Materialism at Gallery Fumi in the East End of London, where both old and new works were presented, including pieces by Max Lamb, Paul Kelley, Marcus Tremonto, Paul Cocksedge, Philippe Malouin and Stephen Johnson. Of note was, once again, the latest design by Paul Kelley, whose wonderfully and skilfully produced furniture pieces, which tread the fine line between art, design and cabinetmaking, had already been available to be admired at The Design Annual 2008 in Frankfurt. His current furniture design is a reworking of the "Rosewood Table and Bench": a table with longer benches lengthwise and shorter ones at the head and foot of the table, this time manufactured in anodised sheet aluminium and with seats upholstered in orange felt. The table top seems to rise like a ramp on its pedestal.

The overall impression of a very respectable and calm Festival Atmosphere was also confirmed by the British design label Established & Sons, and its move to a studio of over 500 square metres in Wenlock Road, which at the same time serves as the company's showroom. Once the leading edge of the avant-garde, and after years of spectacular exhibitions at temporary venues, the company now presents itself in fixed, elegant premises which look almost too 'clean'. We are, all of us, growing up! 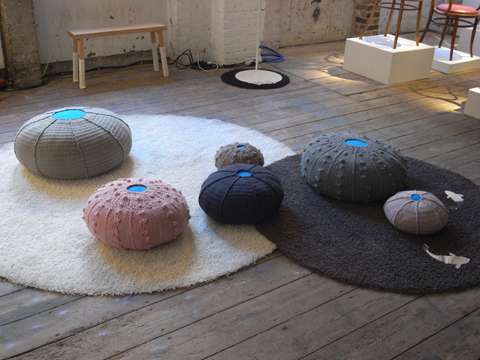 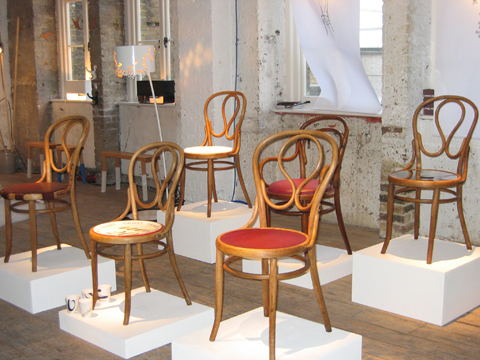 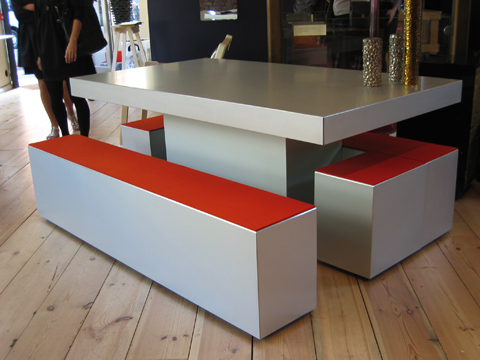 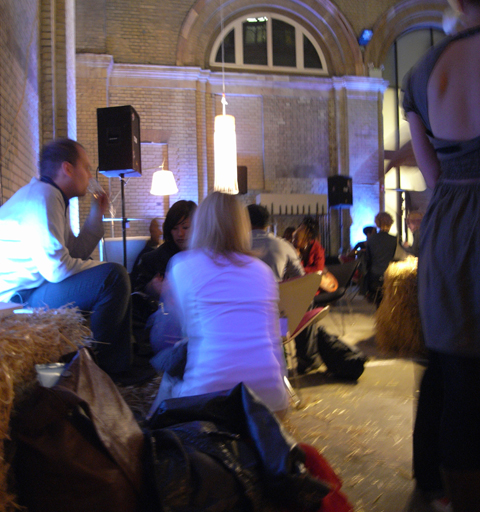 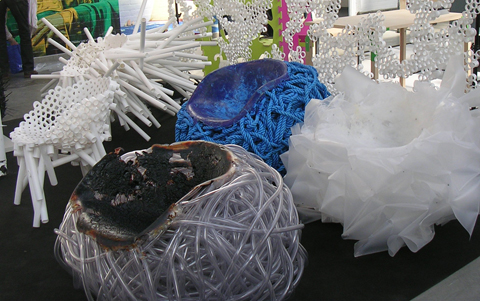 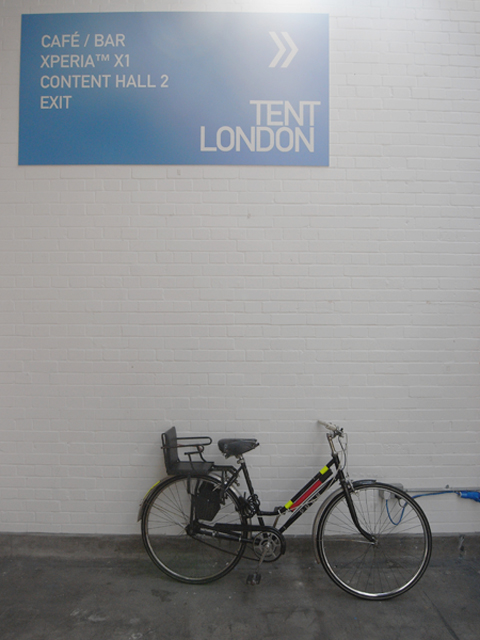 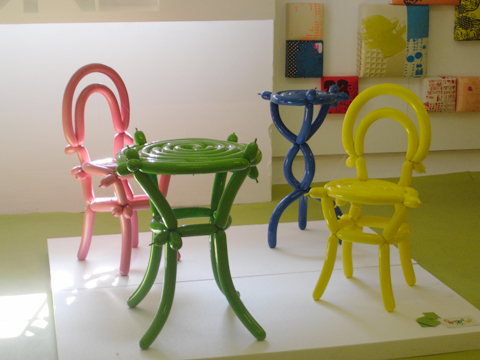 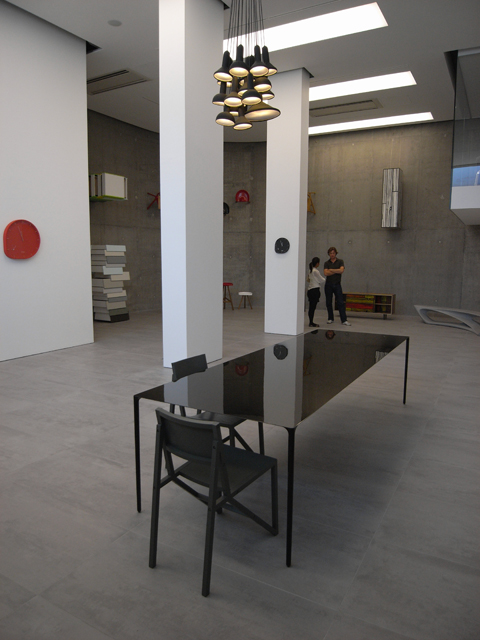 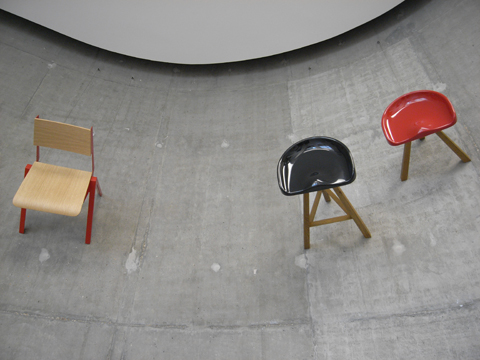 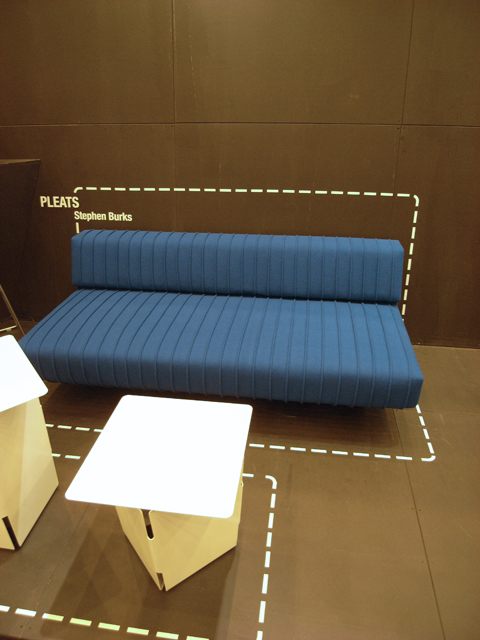 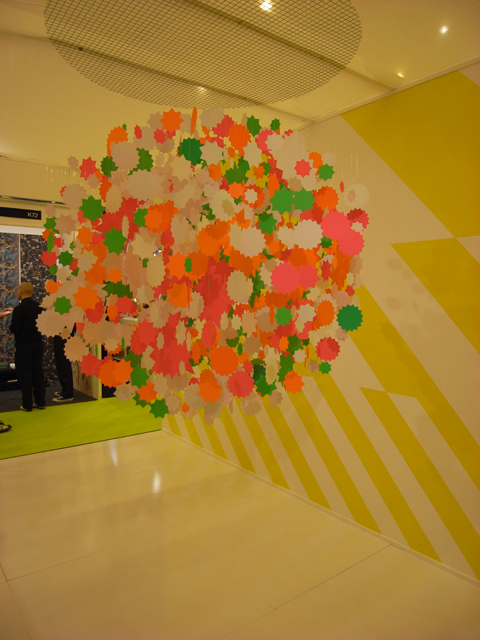 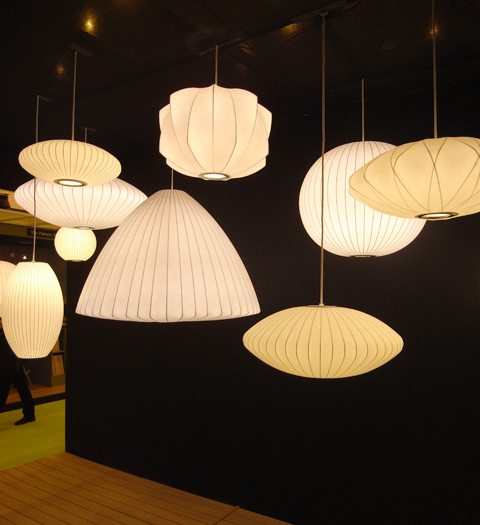 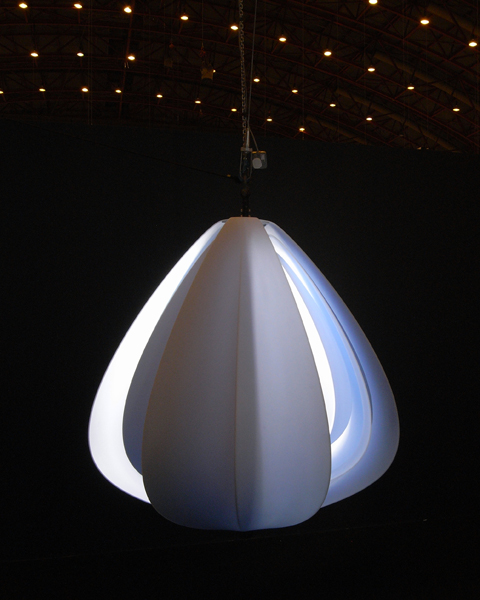 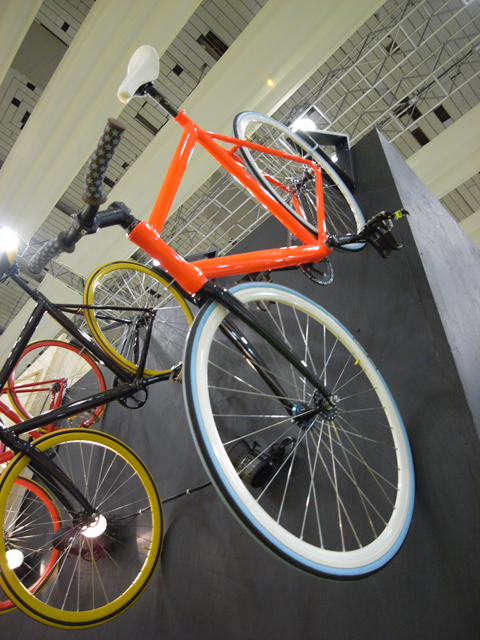 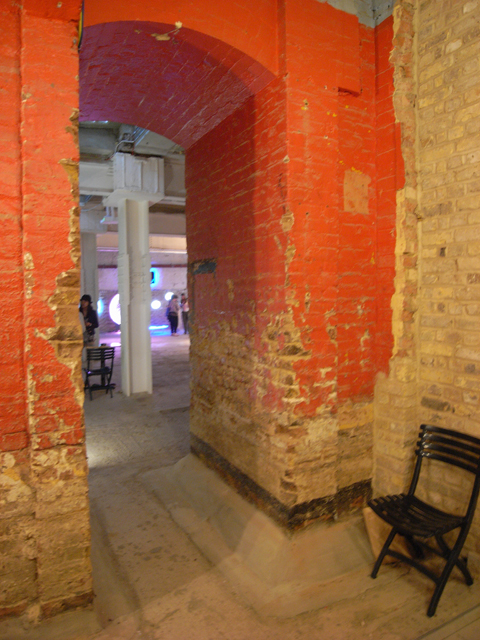 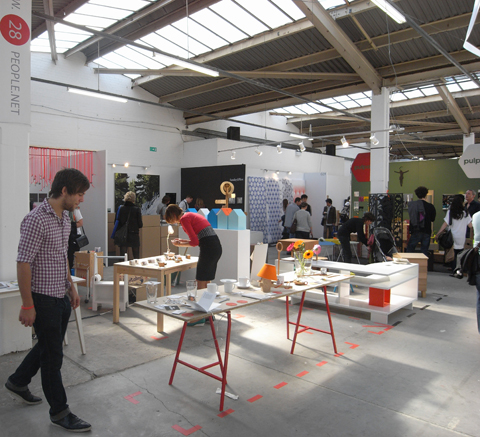 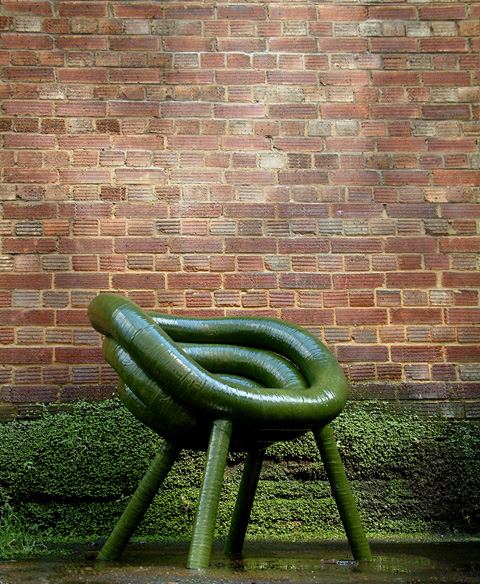 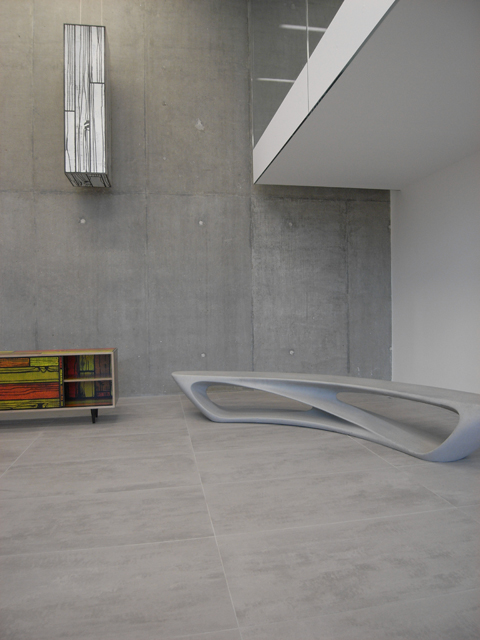