Other countries, other customs, and other everyday commodities. A country's consumer goods tend to resemble a national showcase that reflects a certain standard in terms of form, functionality and aesthetics. In a movie, an American mailbox, baseball cap or yellow-and-black school bus is usually enough to immediately communicate to viewers that the story is set in the USA.

Lesser known internationally than Zippo lighters, the Emeco "Navy Chair" or Leatherman multi-purpose tools is the "Box Fan", a suitcase-shaped fan that appeared in the 1950s, can be practically wedged into the typically American sash window and is a permanent fixture of almost every house in the country. The most popular model is made by Lasko: a white plastic machine that costs $14.96 from DIY giant Home Depot. And it's pretty hard to say what makes this design – apart from the price – so incredibly popular. The old slogan of US industrial design "Ugliness does not sell" does not seem to have had any impact here. Neither does the cliché that Americans always expect consumer goods to come in a selection of at least a thousand different versions. This model is only available in white and only in flimsy plastic. And yet, this is the "Box Fan"! As simple as simple is.

Another quiet hero of everyday American culture that has more or less been forgotten (although it is admittedly just about ubiquitous), is the "Metal Folding Chair". Americans seem to have agreed on this chair, which is always used when furniture mustn't cost anything and has to vanish as quickly as it materializes: this is the chair. It remains a mystery why the contemporary lifestyle concept of IKEA or "America's best housewife" Martha Stewart has not swept it aside. And the staying power of the American coffee mug is essentially a miracle. Why, we ask, have almost all the diners in the country been serving coffee in chunky, slightly waisted earthenware mugs for the last 100 years, which are heavy to hold and whose ergonomic quality is otherwise also highly questionable? Nonetheless, the American coffee mug is an archetype, blindly accepted "Americana".

There is often no ready explanation, and that is a wonderful thing, why plug sockets, light switches, street signs, windows, sanitary facilities or mailboxes take on a certain form; why, for instance, in the USA doorknobs have prevailed over the essentially far more practical European door handles; why even in cooler regions an icemaker in the refrigerator door is standard; why so many people have electric waste shredders installed under their sinks when hardly anyone cooks anymore; why wash basins in public toilets almost everywhere in the US have a crescent-shaped indentation for wheelchair users; and why sidewalks are now being lined with brightly-colored plastic inserts to stop pedestrians accidentally wandering in front of cars. Customs, consumer behavior, social structures and market mechanisms only seem to offer a partial explanation of why objects in modern industrialized nations assume the form they do and how they circulate, find their way into the collective everyday memory and become emblems. An uncertainty remains in the attempts at explanation.

In any case the semantics of American everyday phenomena, which primarily shaped the last century, when America set the tone of the Modern Age, are often powerful and recognizable, like a branded product. In the land of limitless opportunities it is more or less a tradition to see in sometimes the most banal consumer goods a symbol of the "American civilization". Thus it is less a case of ennobling the so-called high culture than industrially manufactured consumer goods that accessible to everyone, as though the legend "from dishwasher to millionaire" should be manifested in the form of socially permeable commodities. The fact that the Coca-Cola bottle, Campbell's Tomato Soup tin and the Brillo Pads box, which Warhol elevated to the status of Pop Art, were able to become American icons at all (perhaps similar to Lederhosen and the Dirndl in Bavaria as typical of the country and its people) is also because the border between folklore and product in the US is fluid, or at least more fluid than elsewhere. McDonald's or Levi's are not just consumer goods brands, but, like "Stars and Stripes", express a standardized American way of life, which holds a heterogeneous nation together. Only those who take out the BBQ tongs in the evening have arrived in the New World.

At the same time, in the progressive nation, notorious for its constant thirst for new things, modern high-tech gadgets are grabbed from the shelves so quickly that a life without eBooks, iPads and smartphones no longer seems conceivable. The obsession with toys is also well known. Whereas the French and Italians, as the kitchen and furniture retailer Williams-Sonoma assures us, would simply reach for a knife, the Americans always prefer a machine or gadget, such as an apple or avocado cutter. Objects that we liked, for instance the egg or onion slicer, in the 1950s, when time and labor-saving measures still promised a better life. In the USA this need for new toys, driven by capitalism, engenders ever new products that in fact don't make any real sense, such as, three years ago, the cheap fleece blanked with arms "Snuggie", a cult object that brought in millions of dollars because it supposedly enabled wearers to easily use the TV remote. A belief in our imaginative ability to forever mold a better, i.e., more convenient world is deeply anchored in the American psyche.

Unlike in Europe, in the United States design standards for everyday objects have never been excessively idealistic. Although Arts and Crafts constituted a counter movement to industrialization, there was neither a work federation nor Bauhaus in America. It is true that European modernists in exile in the US founded influential successor institutions, with, for instance, the Museum of Modern Art in New York launching a trailblazing exhibition series in the 1940s and 1950s with "What Is Good Design?". But the notion of nurturing a sense of taste, such as "good form" in Germany, essentially always remained on the periphery in the USA. And even the representatives of the so-called Mid-Century Modern have not been able to change that.

American design has nothing to do with moral values. Here a claim such as "beauty for all" almost equates to socialism. Consumers are considered in the ingrained free market ideology to be mature beings who are themselves the best judges of what is good for them and what isn't. At the end of the day, sales figures are the true benchmark of success anyway. Nonetheless, or perhaps for this reason, everyday American commodities often look incredibly retro-modern. We are not just talking about the "rusty" charm of an aging industrial look, but also something like the affection felt for a familiar object, which seemingly often leads consumers to opt for that which displays an American familiarity factor. With a strange uniformity, America always goes back to its tried-and-true classics. The old ideal of functional everyday objects that are spared the vicissitudes of fashion is visible in numerous examples in the world's greatest throwaway society.

American children grow up with the metal truck from Radio Flyer, the "Little Red Wagon", which even their grandparents played with as children. The good old trash can, which is home to Oscar in "Sesame Street", still has its place in American households today. As do the borosilicate glass measuring jugs by Pyrex, Kitchen Aid's household appliances, which have hardly changed since the 1930s, the green Stanley thermos flask of 1913 and the rolling stool "Kik-Step" by Cramer, which has just celebrated its 50th birthday.

Igloo's portable plastic "Playmate" coolers – popular for their patented tent top, a practical lid that can be swung to either side – are catching up with the Coca-Cola bottle on the fame front. The coolers, which have been on the market since the 1970s, are must haves for every American, perhaps as widespread as the handsets of the state telephone company in times past. And to find all of these common everyday objects, there is still the institution of the hardware store in the USA, now almost extinct in Europe. These corner shops, which are something of a local community meeting point, offer innumerable consumer goods that have proved their worth for decades. Almost worthy of a museum, but still ready for use, these shelves bear all those things the nation has created for everyday life.

Yet the word culture is barely used in connection with everyday consumer goods; perhaps only at the MoMA or Cooper-Hewitt Museum in New York. Even the currently booming reality shows such as "Antiques Roadshow", "American Pickers", and "Pawn Stars" will not change that. Over 5.5 million Americans tune in to "American Pickers" every week to watch the two protagonists traverse the country in their white Sprinter buying gems of American everyday culture from private individuals. There is probably hardly any other country in the world with so many object fetishists as the USA. A museum presentation of the everyday culture so characteristic of the world's largest consumer society would certainly be highly informative, but hardly corresponds to the widespread anti-museum stance people here take. Snagged between nostalgia and sobriety, we see the objects as what they in fact are: consumer goods. Some fall into obscurity, some stay the course. That's life. In America at least. 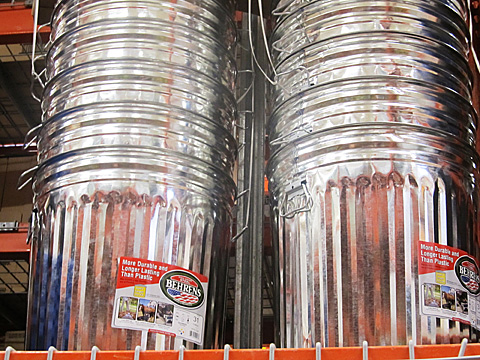 The good old trash can still has its place in American households today, photo © Nora Sobich 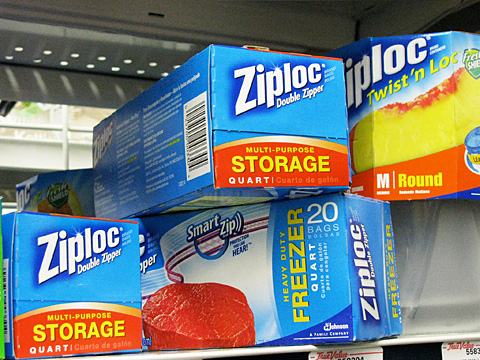 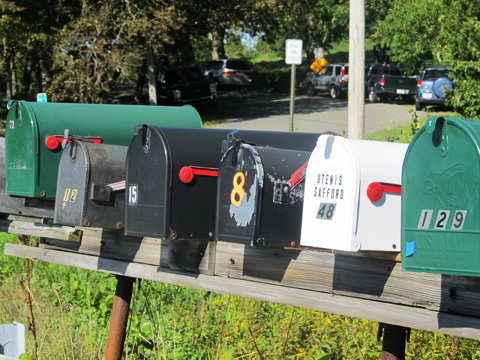 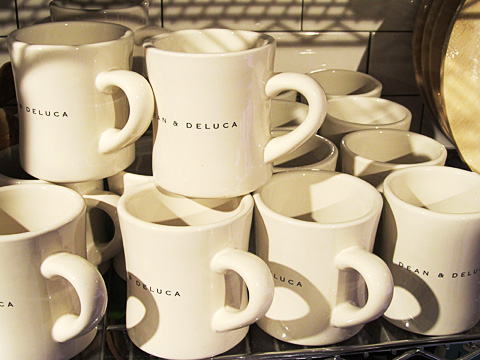 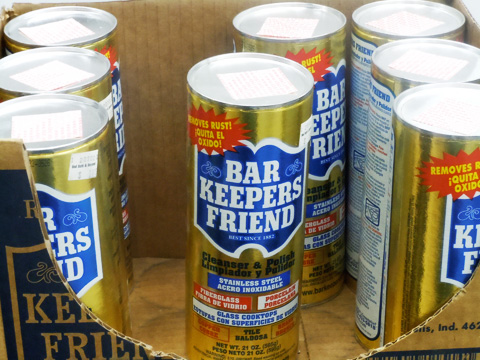 Americans always expect consumer goods to come in a selection of at least a thousand different versions, photo © Nora Sobich 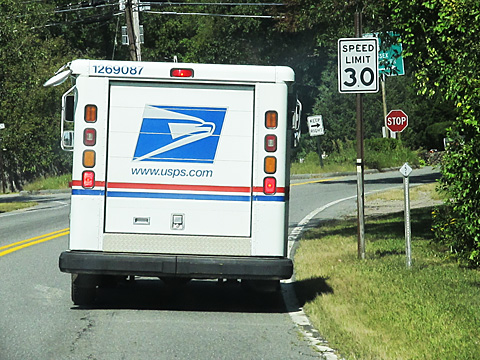 In a land of limitless opportunities, photo © Nora Sobich 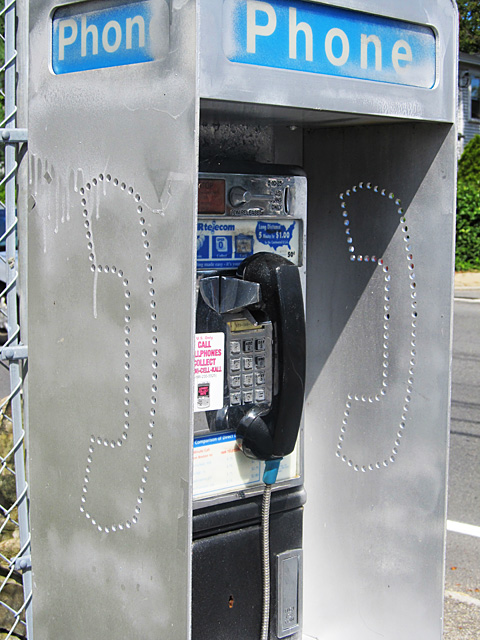 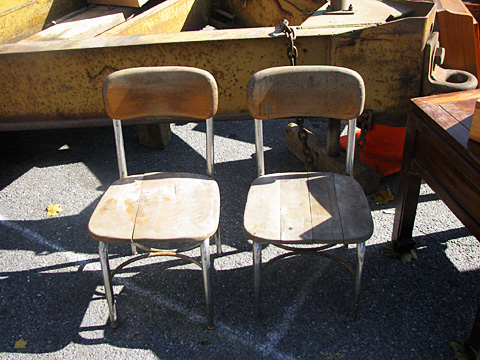 A belief in our imaginative ability to forever mold a better world, photo © Nora Sobich 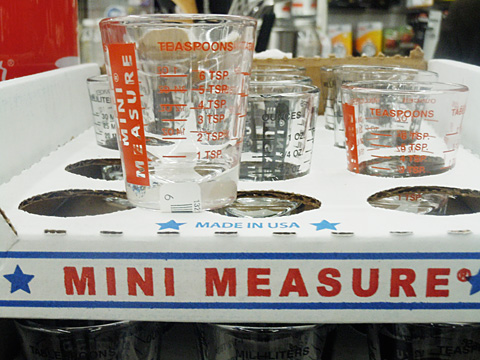 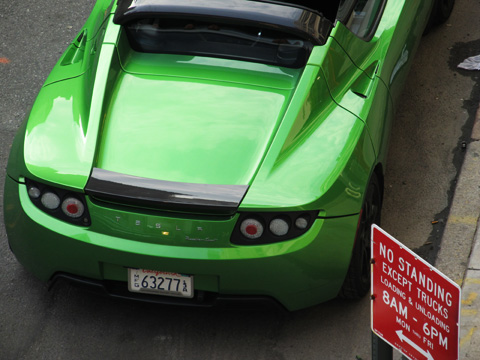 Other countries, other customs, and other everyday commodities, photo © Nora Sobich 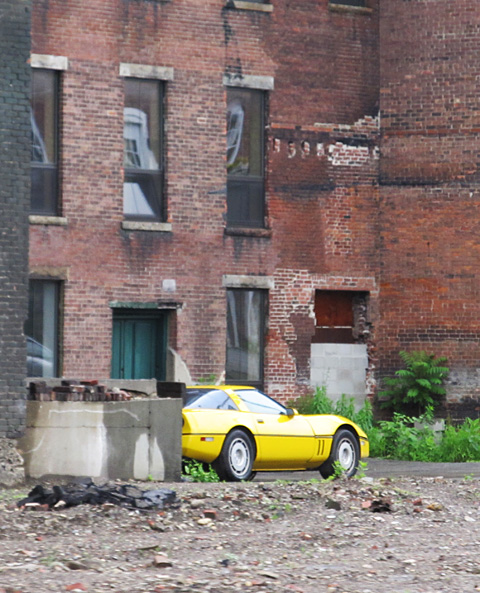 Made in USA, photo © Nora Sobich 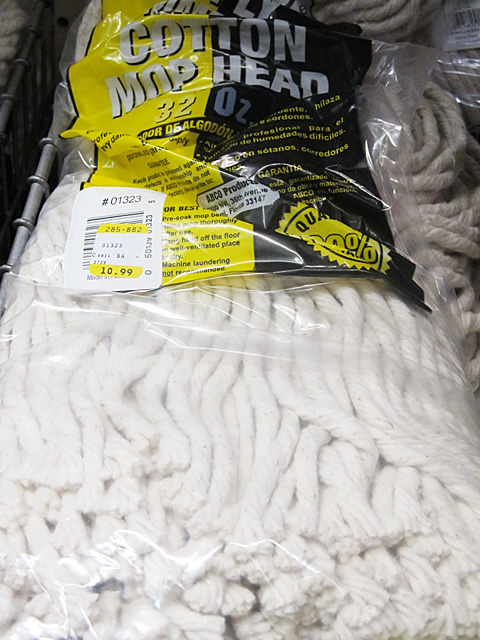 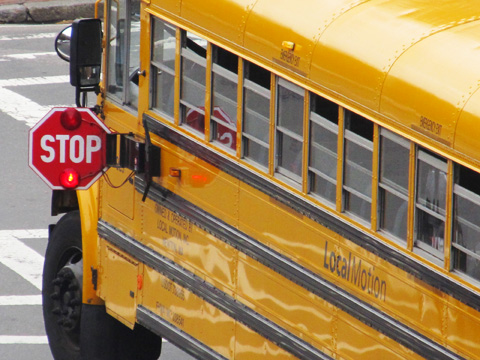 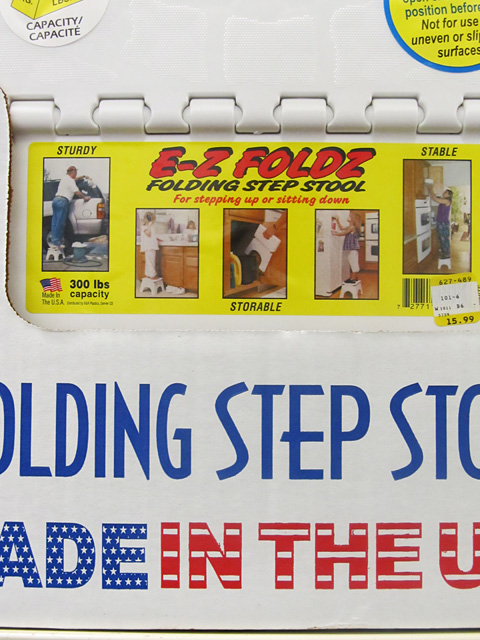 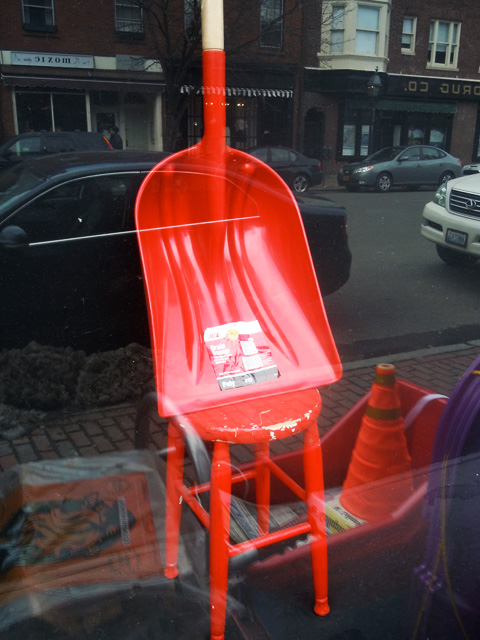 The United States: one of the world’s largest consumer societies, photo © Nora Sobich 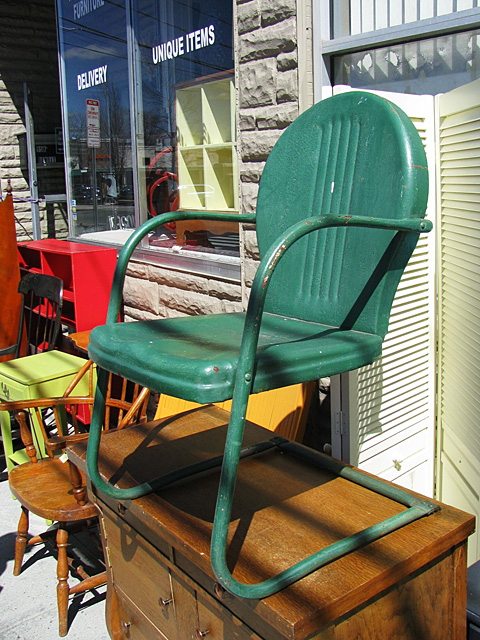 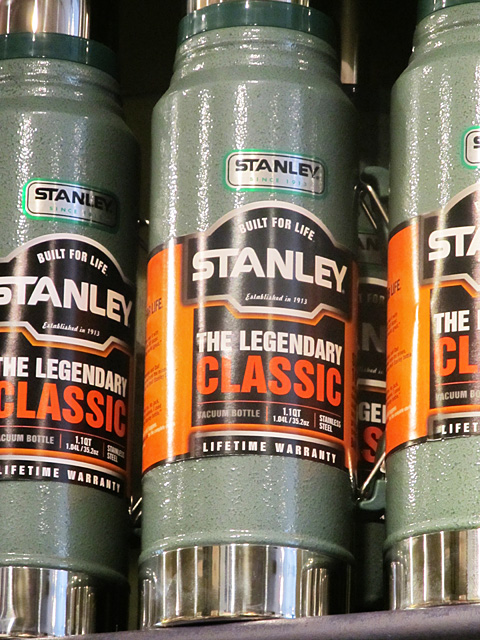 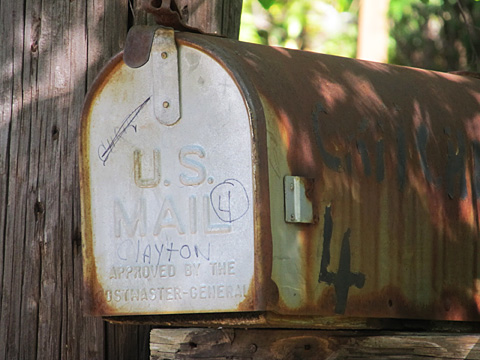 In a movie, an American mailbox is usually enough to immediately communicate to viewers that the story is set in the USA, photo © Nora Sobich 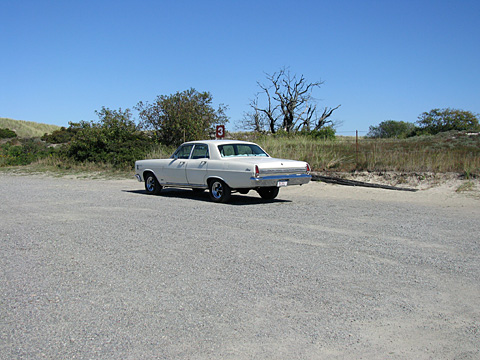 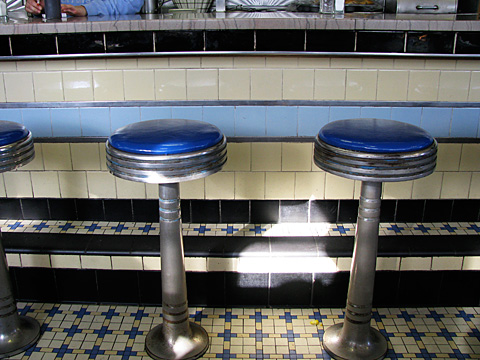