There are countless tubes of paint lying around. Of all shades and sizes. In fact, the shelves on the walls are bending under the strain. They are stacked up with colored cans and boxes with all manner of things. Nails, screws, tools. Bits of rough wood lie here and there. The walls are decorated by small bits of paper with sketches. Some of them the merest touch of an outline, others very clear. Initial ideas that needed to be put to paper. And among all the materials for drawing, sawing, filing and cutting there are simple desks. Two trestles, a top. Nothing more. And on them opened laptops. The entire room is devoted to creativity. The coarse wooden floorboards, the white-washed walls, the glass roof that provides constant light. The room functions as a workplace purse and simple, but also as a stage for the works that arise here.

Admittedly the glass roof transform the room into something like an oven in summer and a fridge in winter. Harsh reality then destroys the poetic notion of a place where creative thoughts and ideas can almost be felt in the air. But the nine young people who have now set up working places in this productive mess would never want to abandon this room in an old warehouse in North London.

One of them is young German designer Mathias Hahn, who with playful-elegant product designs has already made a name for himself in the design world. Mathias Hahn, born in 1977, seems at first sight to be a fresh, unconventional upcoming designer. Reddish brown uncombed hair, cut leisurely, then the outfit - usually jeans, bright nothing-special shirt, and sneakers, with a few spots of paints and bits of dust. This is more or less what one expects a creative designer to look like, someone who is enthusiastically and passionately immersed in their work. Hahn does not try and take the limelight, but wants center-stage to belong to his works, products for everyday use, such as luminaires, pieces of furniture, and occasionally cutlery or flower vases.

Mathias Hahn first studied Industrial Design at the University of Duisburg-Essen. During his time there he already worked as a designer in industry, gaining experience among other things in the design section at Volkswagen in Wolfsburg. After graduation in 2004 he relocated to London, and in 2006 graduated with a Master's from the Royal College of Art, where he studied under Ron Arad. Hahn joined up with six other graduates from various countries in looking for a studio space that they could share - along with the materials. Because working life in London is expensive. Moreover, joining forces made it easier to not worry about how strong the competition is in London. The young designers founded OKAYstudio, a design community that works both as a collective and in which the individual designers also go about furthering their own careers.

In 2008, London's Aram Gallery presented works by OKAYstudio. Each designer in the group presented pieces that had arisen under the "joint roof" of OKAYstudio. Mathias Hahn for the first time presented his "Lantern" luminaire, which has a shade you can fix at any height on a cable using a peg. The cable is run through the shade and doubles up as power cable, design element and part of the positioning mechanism. In 2009, the luminaire went on show at the imm Cologne as part of the "d3 design talents" show. And only one year later it was back on display in Cologne, this time as part of the current Ligne Roset collection.

"Lantern" offers a convincing mix of clear aesthetic and ingeniously simple technology. Hahn combines materials used in mass production with a simple mechanism and yet finds a new interpretation for both. The principle is to be encountered in many of his products: "My roots are in industrial design, so I always have industrial production and functionality at the back of my mind when designing something," he explains. "I explore simple materials and techniques, and fundamental mechanical systems, and then create new contexts or interpretations. The result is often objects for everyday use that have a clear function but also come with a streak of humorousness or naivete. That gives them the human touch!" In the design process, Mathias Hahn marries functionality and applications with his natural curiosity and intuition. "The honesty of the material, the construction and the shape are important to me," he professes. And you can see this in his objects: They hide nothing and are self-explanatory. For example, "Wooden Chair" or "Odd Cabinet"; in both cases, Hahn highlights the structural connections. Or his "Scantling Lamp", which exploits the friction in the joints to be lockable in any position.

The German designer seeks to create things that have a long service life. Today's short-life consumer world is not something he likes: "My products are supposed to be simple and useful. This lends them enduring value." Mathias Hahn shows what he means among other things with his "Guest Stool". The cup-shaped stool can be used as a seat for an unexpected visitor or as a small side-table - both indoors and outdoors. When not in use, it can simply be stacked neatly in a corner. Süddeutsche Zeitung-Magazin has already included him in its design edition. And in the form of "Coatlight" Hahn has developed an everyday product with a unique reduced design but multiple functions: It is coat-stand and corridor lighting rolled into one.

Mathias Hahn's design have a convincingly uncluttered look to them, and deliver intelligent technical solutions. With each piece he tells a small story, encouraging us to touch it, toy with it, use it. Which makes his products so human. 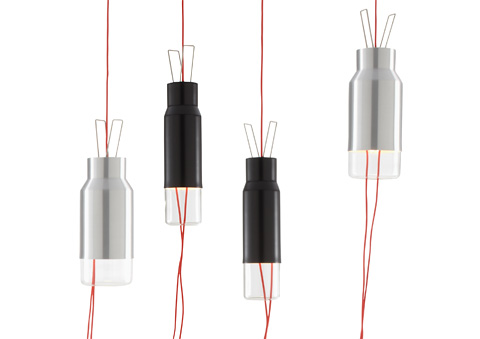 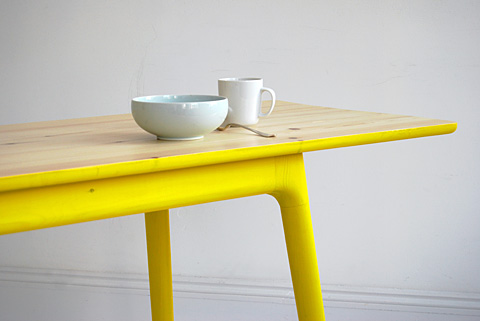 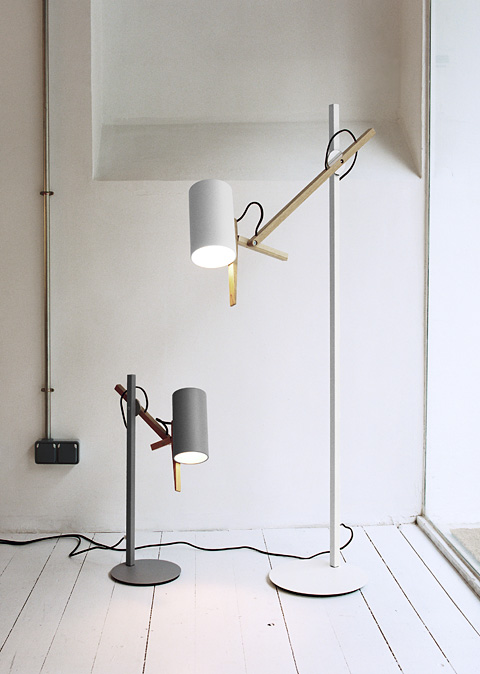 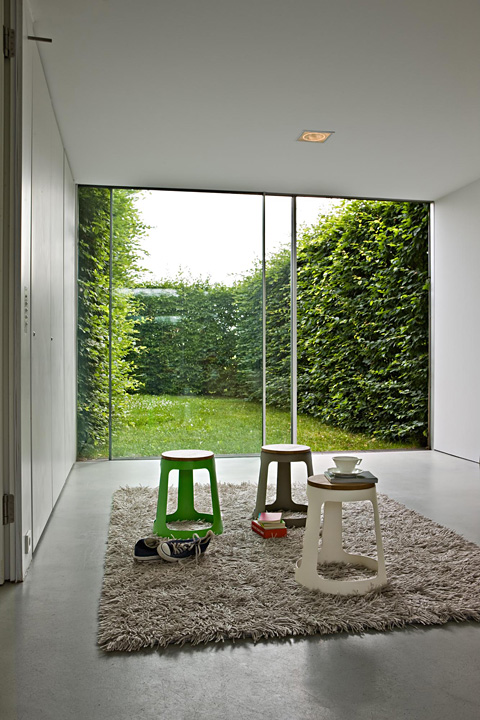 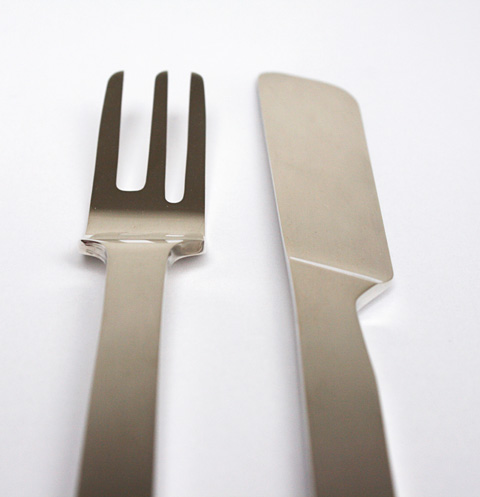 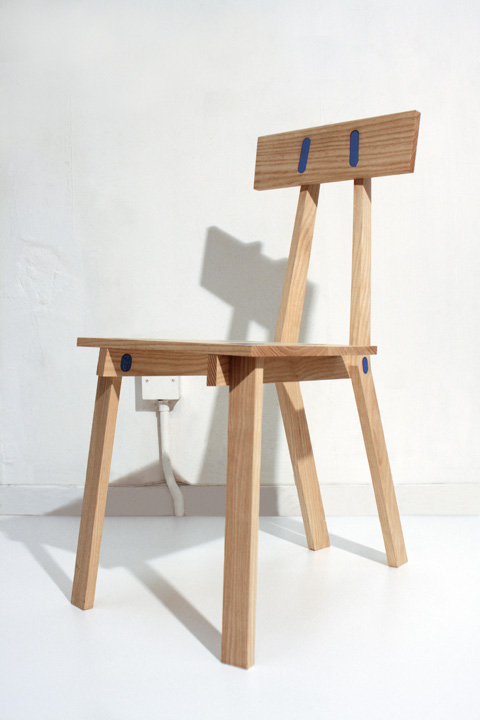 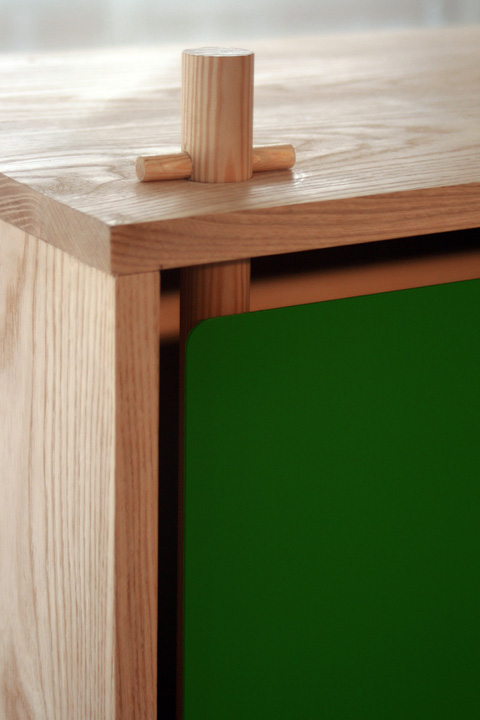 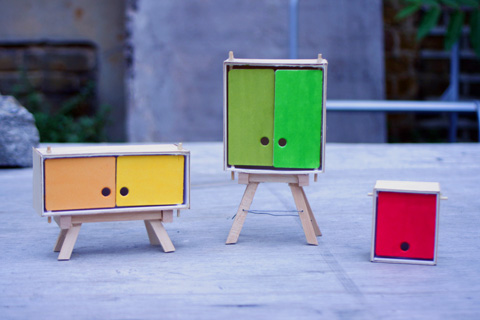 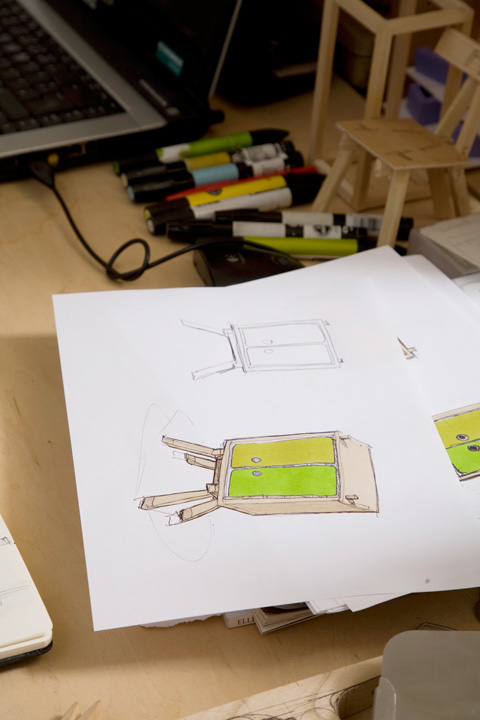 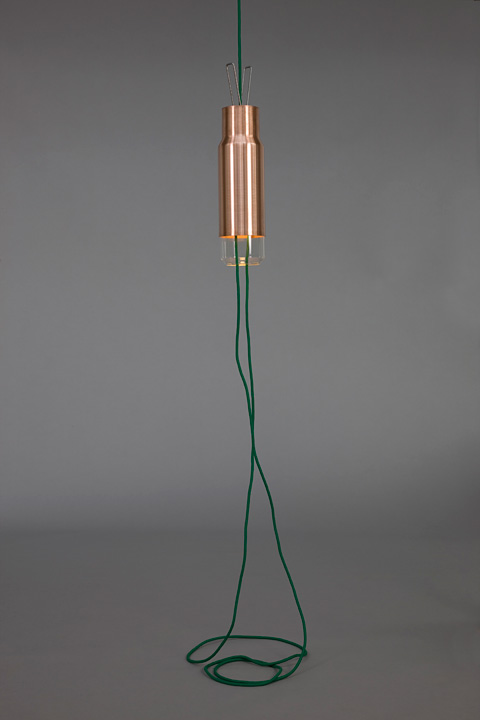 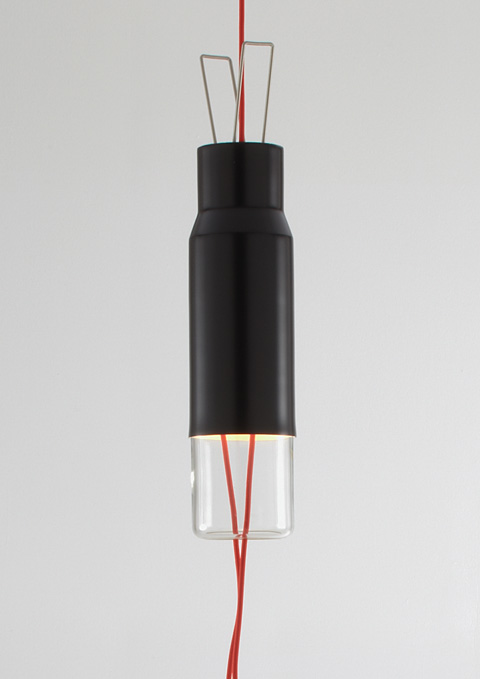 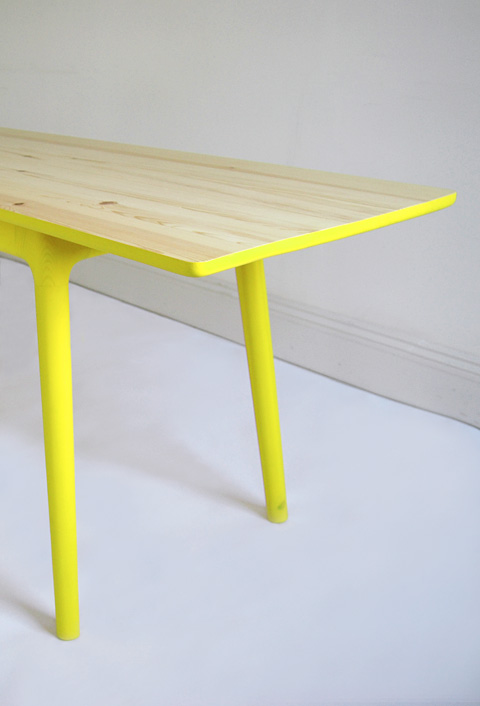 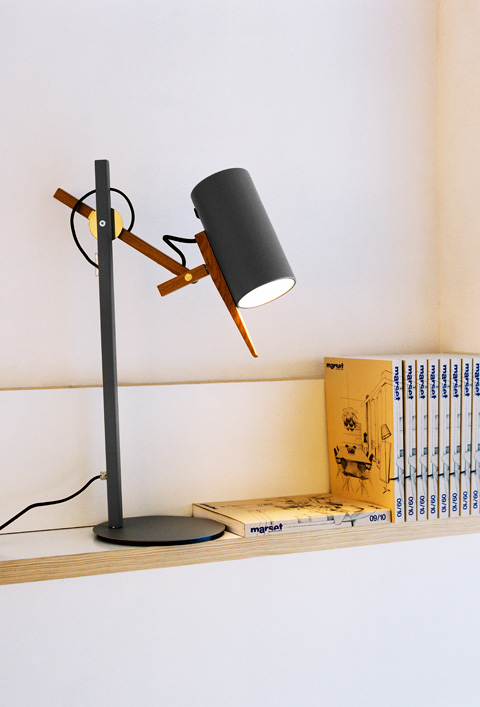 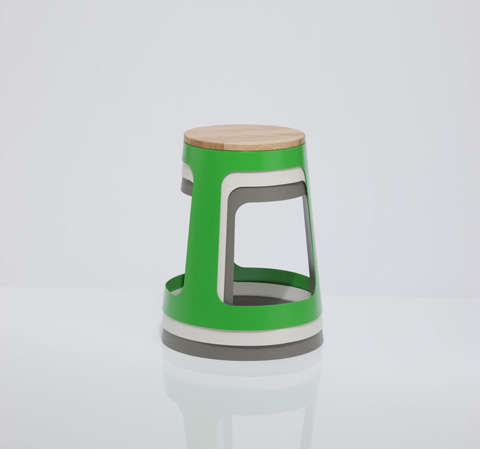 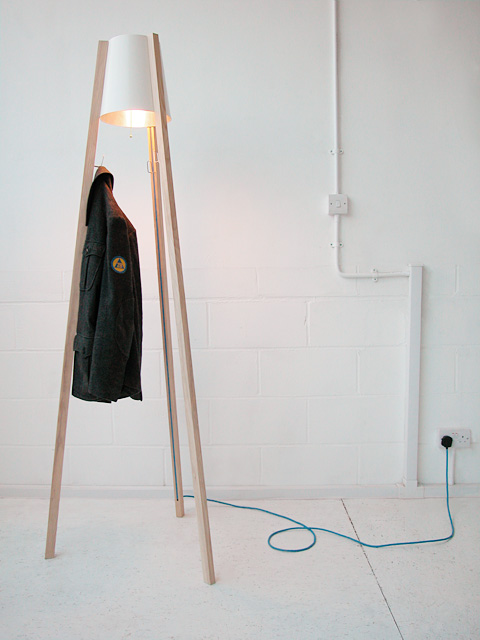 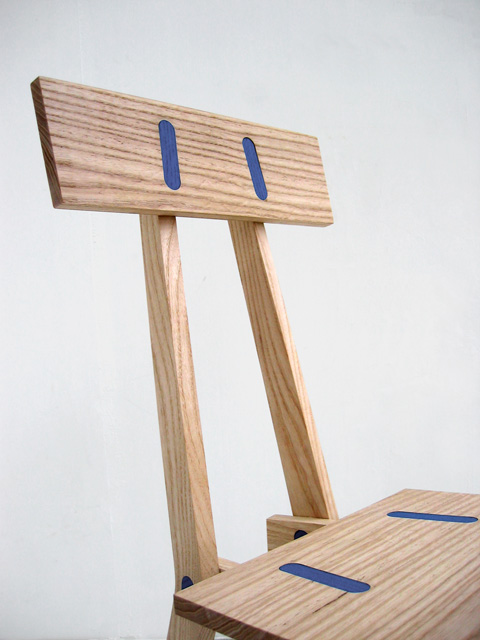 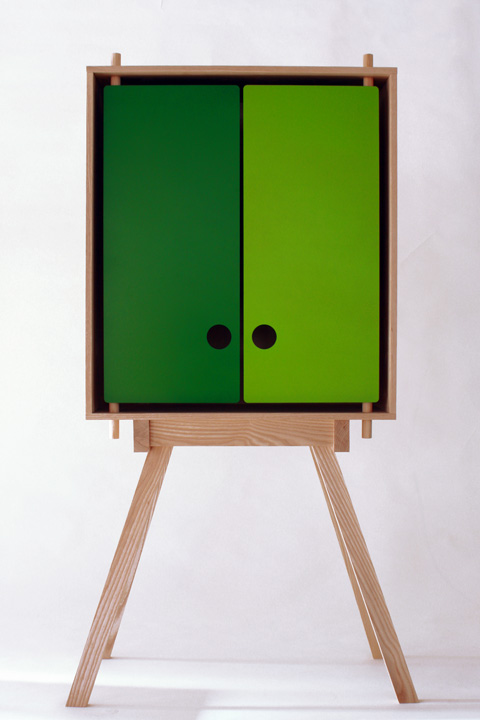 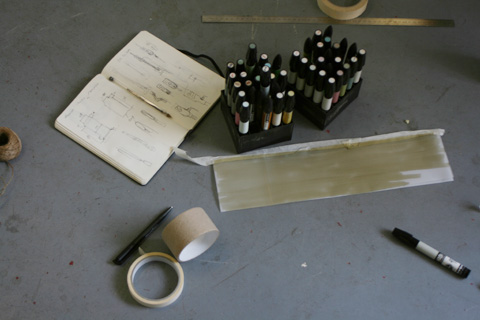 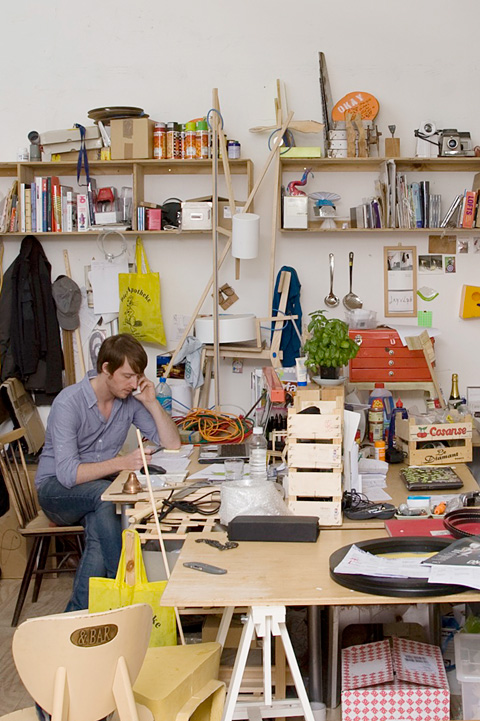