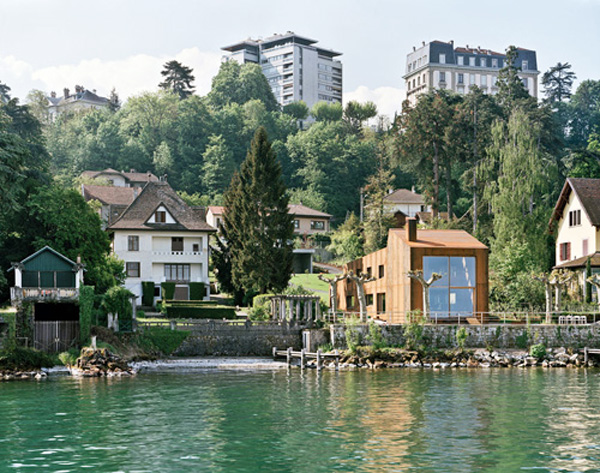 Stately villas and countless boathouses line the southern bank of Lake Geneva, where the small French town of Thonon-les-Bains attracts holiday makers and spa guests to this border region between France and Switzerland. Tracing the line the lakeside promenade with your eye, you suddenly find yourself caught on a quadratic, rust-red building, contrasting distinctly with the whitewashed villas that frame it.

The concept created by Zurich architects Kaufmann Widrig for the two-story detached house is nurtured by opposites, oscillating between assimilation and distinction. On the one hand the building is intended to fit in with the surrounding environment as well as possible, which owing to the nature of the plot faced the architects with quite a challenge from the very outset. That is, the area that is comparable with a park actually belongs to the neighboring villa and was previously used as a fruit orchard. The elongated, parcel-like shape of the plot that leads down to the narrow north side of Lake Geneva’s banks restricted the scope for the building’s design, which ultimately led to use of the simple, quadratic geometric shapes we see today. In terms of structural engineering and materials, the architects once again oriented their concepts on that which preceded the building. The rusty-brown patina of the steel façade was inspired by the weather-beaten, crude cladding seen on the numerous boathouses in the area. What can be understood as a concession to the more down-to-earth side of this rather grand neighborhood, simultaneously demarcates the building from the pomp of the surrounding villas.

The house’s interior also distinguishes itself in its contrasts. The larch-wood paneled walls create a comfortable, secure atmosphere in the living space, giving it a warm flair and in doing so make it almost reminiscent of a ski chalet in the Alps. This is contrasted with the anthracite-colored concrete floor, which exudes cool, contemporary elegance and in turn ensures that the comfy hut-like charm doesn’t get too out of hand. Large windows with a view of the lake not only flood the interior with daylight at all times of the day, they also lend the cuboid room a gallery-like appearance. The house’s owner, a Swiss businessman, took the interior design into his own hands. He has filled the space with a tasteful mix of stunning furniture classics and austere, contemporary designs, such that the concept of contrast is continued from the exterior through into the interior. 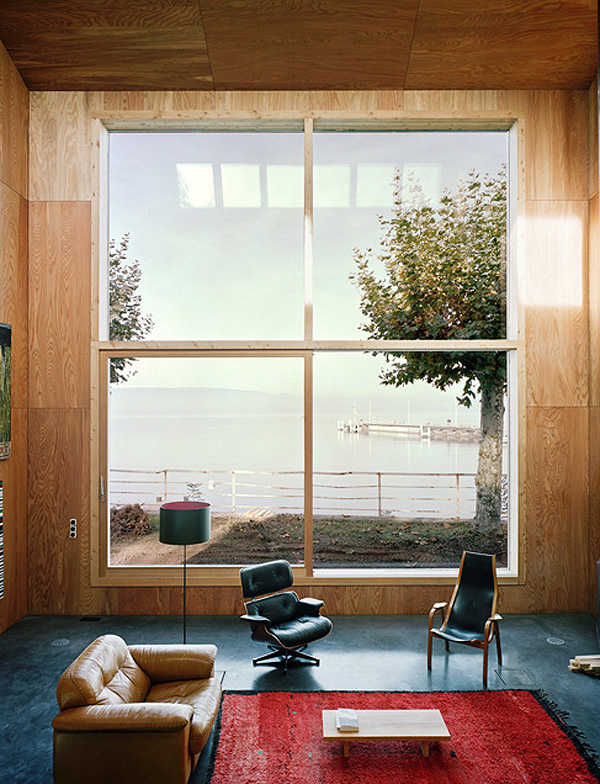 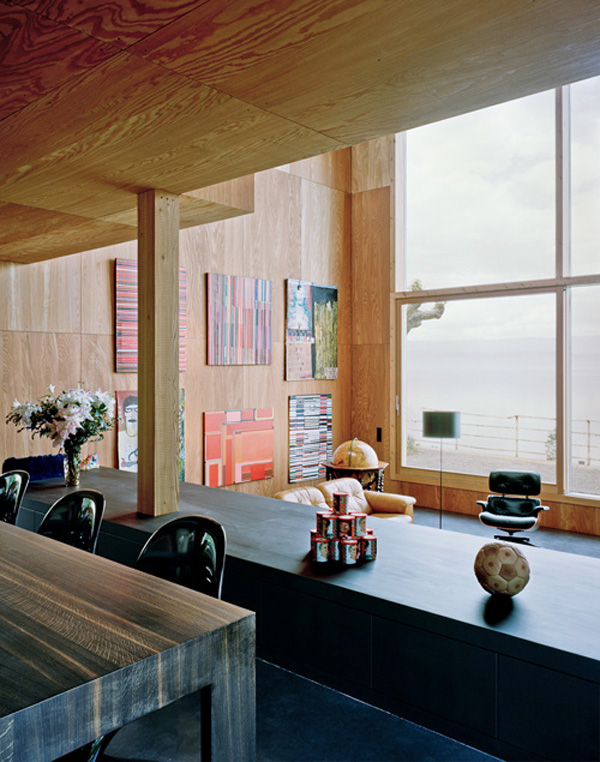 The wood paneling inside the building creates a warm atmosphere, photo © Georg Aerni 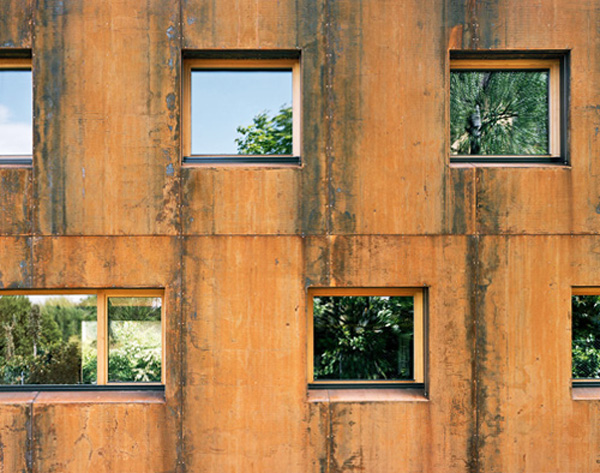 The rust-red façade visually reminds of the boathouses in the immediate vicinity, photo © Georg Aerni 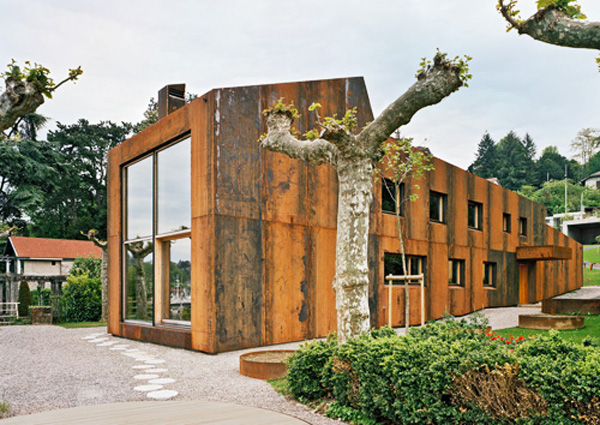 The elongated building is built on the former fruit orchard of the neighboring villa, photo © Georg Aerni 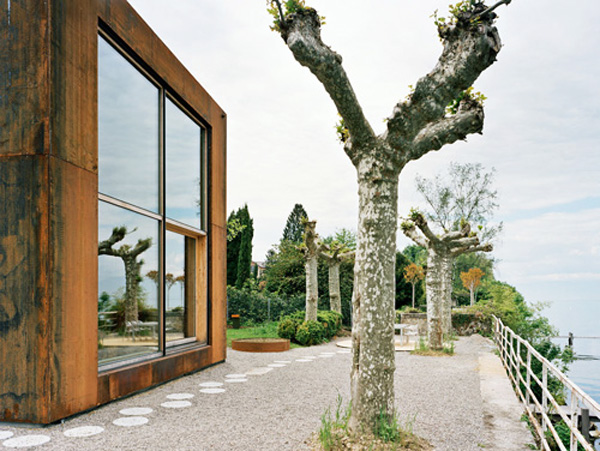 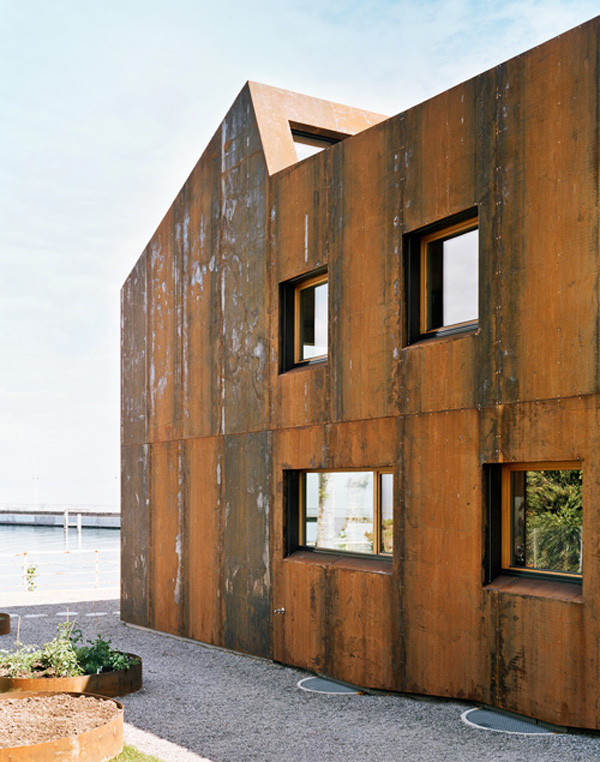 The house was built just a few meters off the shore, photo © Georg Aerni
Advertisement