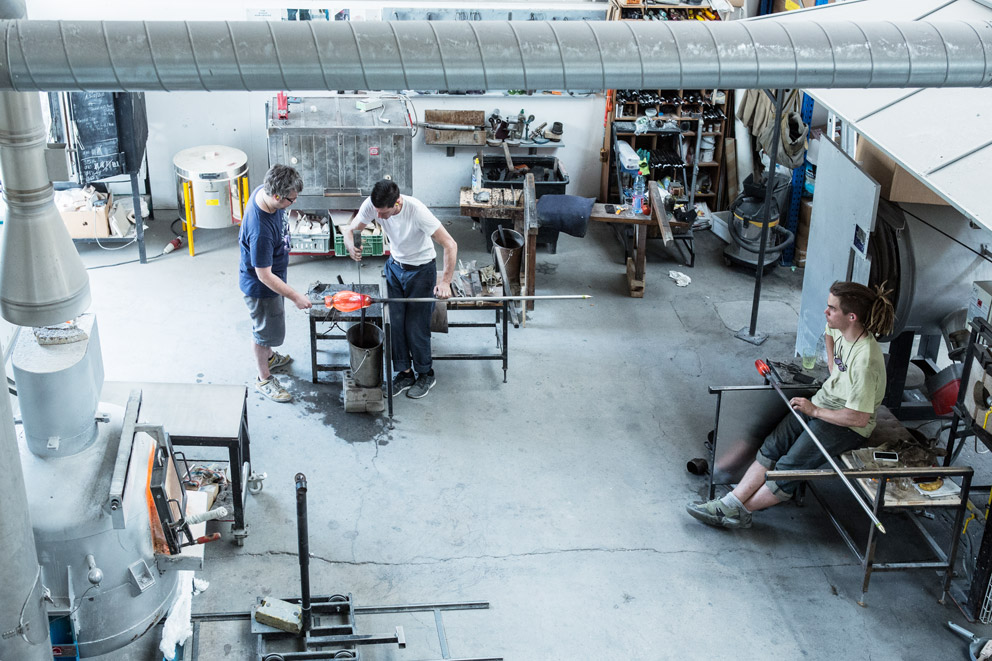 As a glassblower, Matteo Gonet works in a trade that appears to be dying out in the age of industrial mass production. A brief look at his client list highlights just how sought-after his skills seem to be – it is peppered with the names of famous designers, artists and companies. For instance, despite his young age Gonet has already collaborated with artist Jean-Michel Othoniel, designer Mathieu Lehanneur and architects Buchner Bründler and Miller & Maranta. Gonet’s craftsmanship always comes into play when what is called for is more than mere off-the-shelf products. And this was the case with a joint project developed by faucet manufacturer Axor and students at the École Cantonale d’Art de Lausanne (ECAL). Adeline Seidel spoke to Gonet about the students’ unusual faucets and his enthusiasm for the material of glass.

Adeline Seidel: Apparently you decided to become a glassblower when you were just 15 years old. How did that come about?

Matteo Gonet: I did. It was by chance that I chose the profession – and my family hoped that it was only a brief phase I was going through. (laughs) It was quite simply the case that the workshops really impressed me. Glass, that fragile material, the fire and that macho attitude. And then, when I discovered that I would have to go abroad for the training – there just weren’t any apprenticeships to be had in the trade in Switzerland – the prospect suddenly appealed to me all the more. After all, I wanted to travel, which I then did, for four or five years.

So glass as a material played no part in your choice of profession?

Gonet: In fact, I didn’t find out about it properly, so to speak, until later. To begin with, it was the actual work, the mechanical skill that impressed me more than the material itself.

And what’s the situation today?

Gonet: It’s a craft that it is very difficult to learn. For the first few years you need to practice a great deal. It’s only later that I started asking questions: What exactly is glass? What are the limits to its malleability? Etc. etc. That kind of question still preoccupies and fascinates me. There are many different types of glass. It can be hard, opaque, transparent, colored. It can be very fragile but then again very solid. We like to experiment both with different uses and with the different properties of the material. And I do find that so very fascinating. 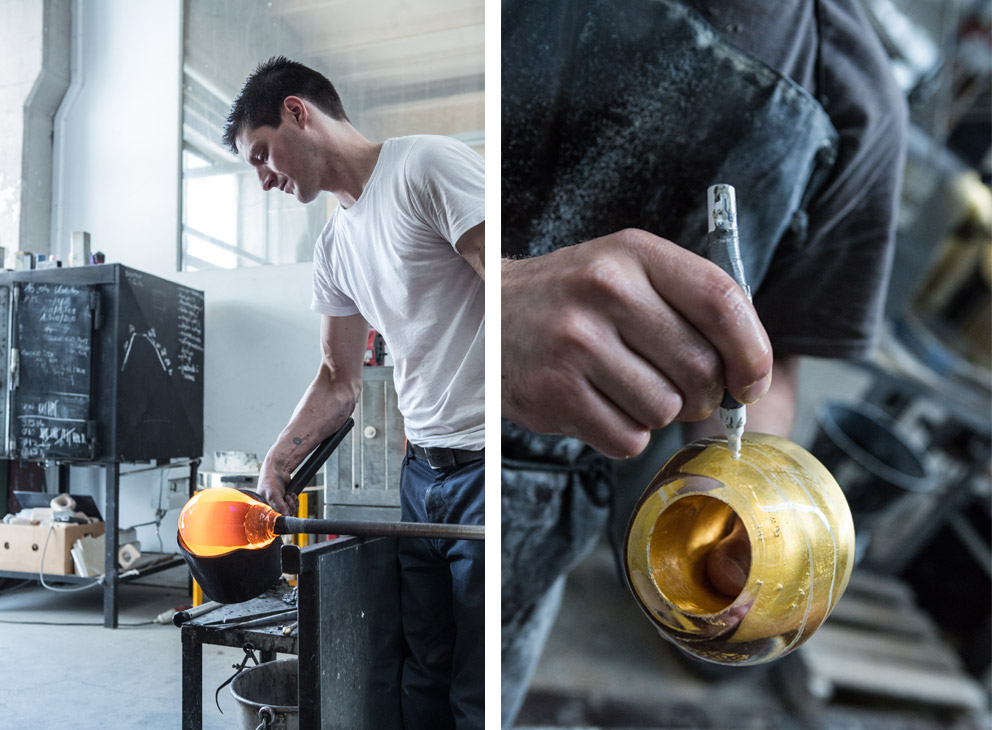 In a collaboration with Axor and ECAL students developed new ideas for a “fountain faucet”. The results were presented at the 2015 Salone del Mobile in Milan. What was it about the project that appealed to you?

Gonet: I am no faucet expert. But it was good to work on various projects connected with this new type of faucet. One particularly interesting thing in this context was the meetings with Philippe Grohe. He really does have a vision, a very clear idea about which of the designs fit in with the new approach and which of them don’t. That surprised me on a number of occasions.

Gonet: He explains everything lovingly and with masses of enthusiasm where water is concerned – I found that absolutely fascinating. For instance, there was one suggestion by a student that didn’t really impress anybody to begin with. But Grohe saw much more in the project and he was able to explain why – starting with the way that the water moved through the faucet. His commitment and his abilities immediately made the entire project with Axor and the ECAL much more interesting as far as I was concerned. He can picture how water moves! And he can say: “That’s too tall” or “That angle’s wrong” and this was the only reason why we were able to come up with the necessary prototypes in the extremely short timeframe of two weeks.

What was the greatest challenge for you in producing the prototypes?

Gonet: The fact that there were two worlds colliding here: The craftsman’s world where it can happen that an item is two millimeters too short, and the world of industrial parts, the base units for this fountain spout, which are made of metal and which do, of course, need to be manufactured to a very precise standard. We really were tested to the limits of our craftsmanship and we can’t take our design much further without the appropriate tools. To give you one example: The faucet with mirror. Things like that were extremely difficult to manufacture.

Do you have a favorite amongst the prototypes?

Gonet: Well, I do think that the faucet with the stacked glasses is very good. OK, so the actual design isn’t incredibly exciting but I do find the idea pretty cool. I can imagine that people would enjoy using something like that. Generally, I do find this new type of faucet developed jointly by Axor and Philippe Starck very interesting simply because you can watch the water, the way that it moves, and its dynamics. As a general rule it flows invisibly, through a metal pipe.

Have you ever before worked on orchestrating water?

Gonet: For the most part, we don’t work on our own projects, instead we implement other people’s ideas. My operation is only small we don’t have much time for designing. We once produced an aquarium for a French designer – a table which showed off plants and fishes. It’s often the case that glass acts as a receptacle for wonderful things. Whether we are talking about wine or water or light – glass frequently represents a window on things that radiate a certain beauty, a certain magic. It connects us with these lovely elements.

Do you have a favorite place where water plays an important part?

Gonet: We have just come back from Iceland where water is present in all shapes and forms. As waterfalls and geysers, in liquid or frozen states. And on this particular island it does rain, frequently. It’s absolutely beautiful. 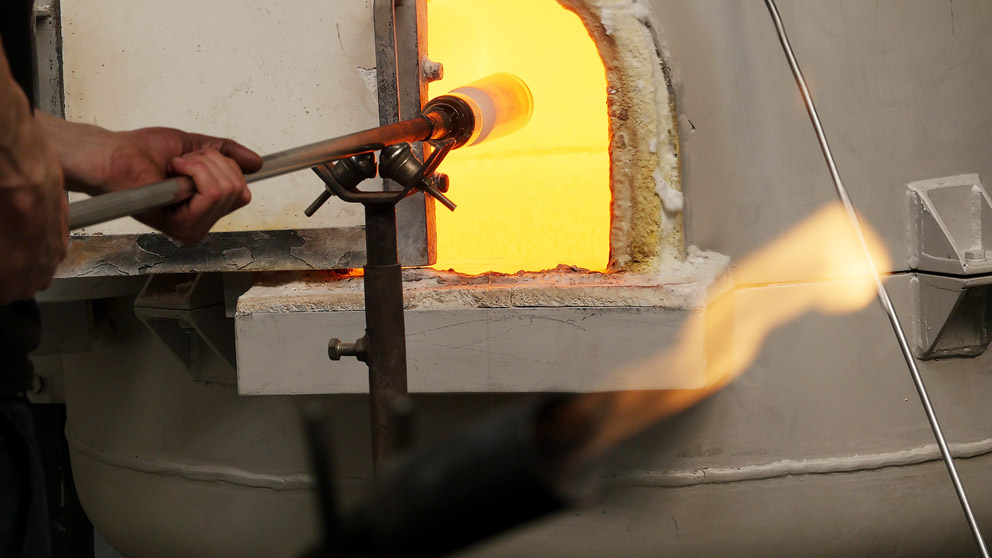 Gonet’s craftsmanship always comes into play when what is called for is more than mere off-the-shelf products – this was the case with a joint project developed by faucet manufacturer Axor and students at the École Cantonale d’Art de Lausanne (ECAL). Photo © ECAL / Axel Crettenand 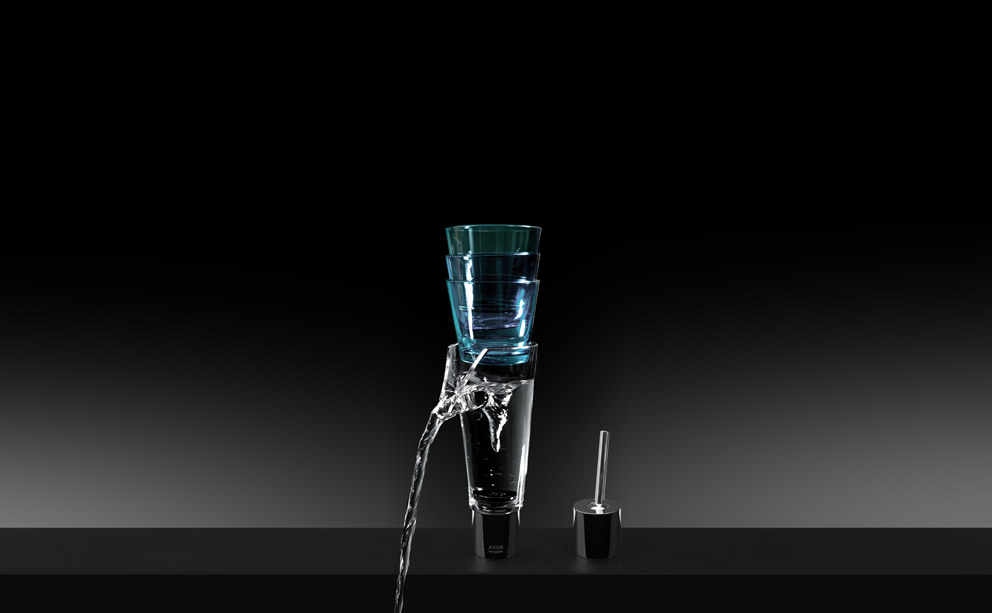 "Glass" by Jordane Vernet. The conical shape above the spout creates a space to stack glasses in a smart way, conveniently providing drinking glasses and keeping the sink space tidy. Photo © ECAL/Axel Crettenand 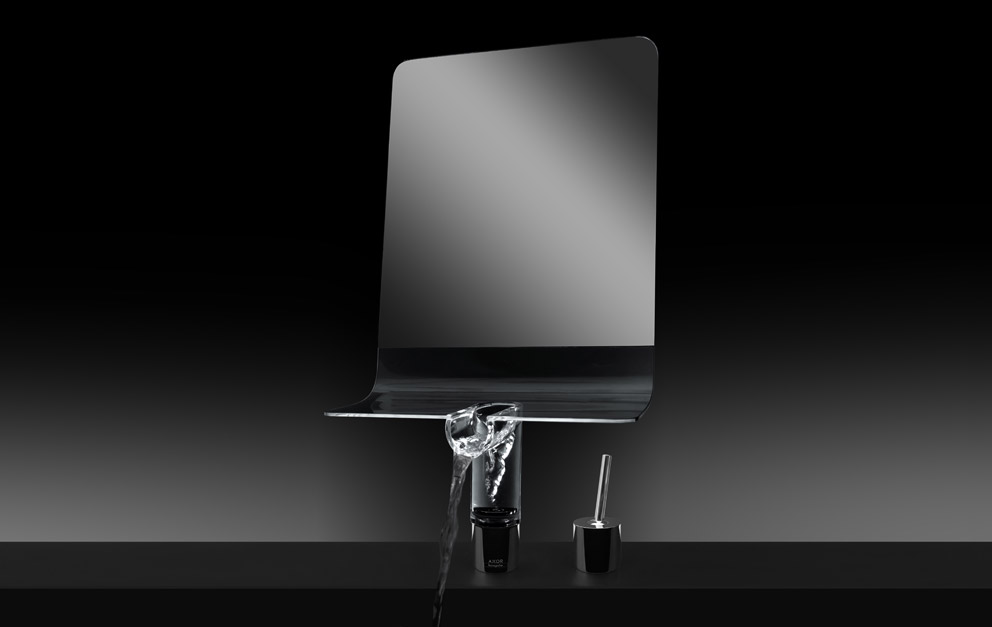 "Vanity Mirror" by Thomas Elliott Burns. The connection between water and our reflection has existed long before the invention of the faucet or the mirror. This piece combines the faucet with a mirror and a small shelf space, changing our expected landscape of the bathroom. Photo © ECAL/Axel Crettenand 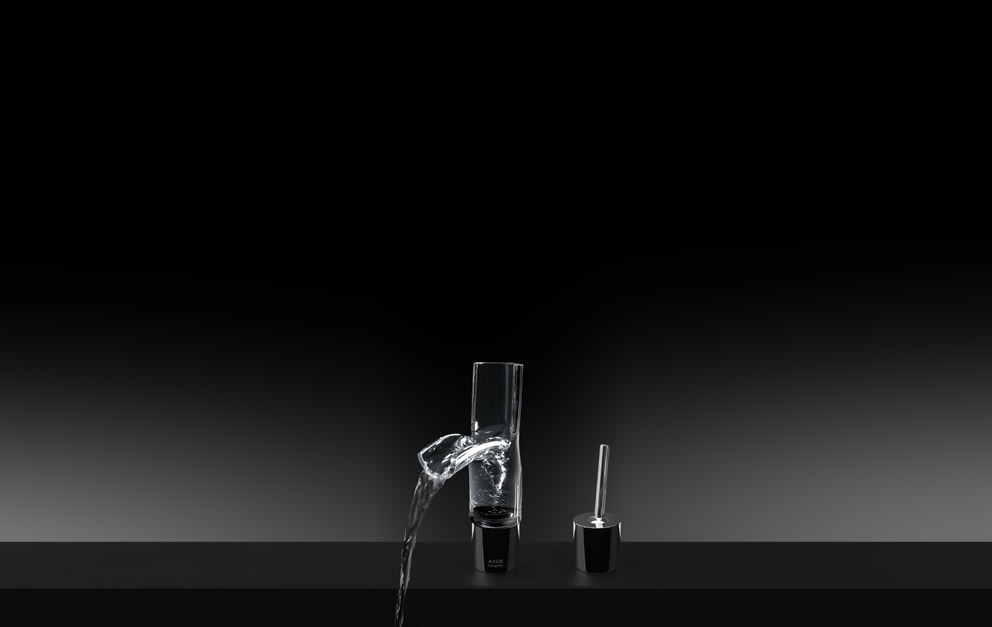 "Bend" by Stanislaw Czarnocki & Katarzyna Kempa. Starting with a standard tube shape and adding a single cut, the spout portion of the faucet is bent away from the main body of the faucet. This elegant solution speaks towards simplicity in production methods. Photo © ECAL/Axel Crettenand 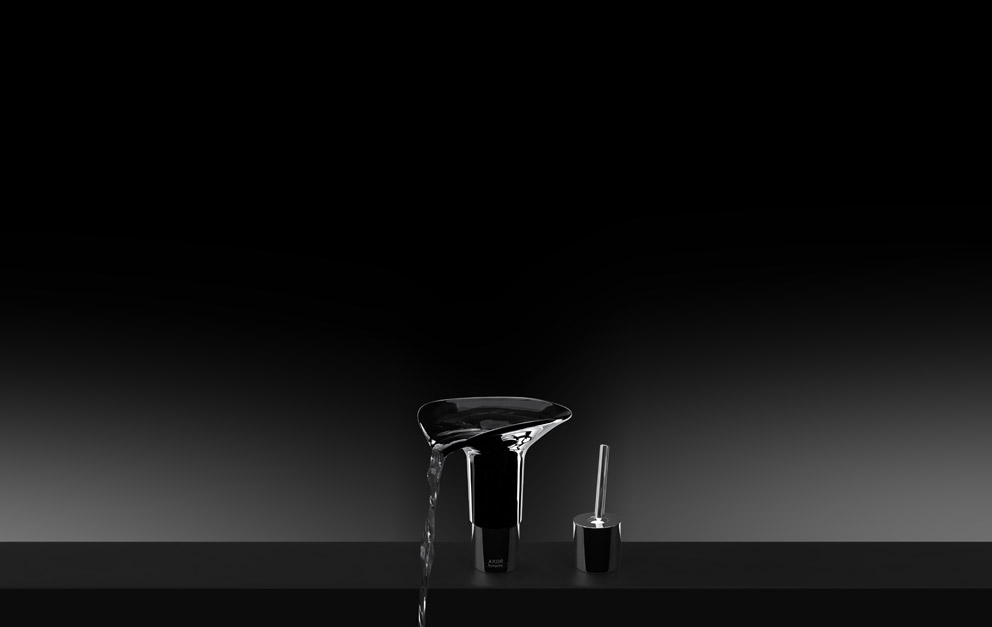 "Lotus" by Iris Andreadis. Inspired by the leaf of the sacred lotus, this faucet brings nature into the bathroom and conveys a sense of calm and serenity. Photo © ECAL/Axel Crettenand 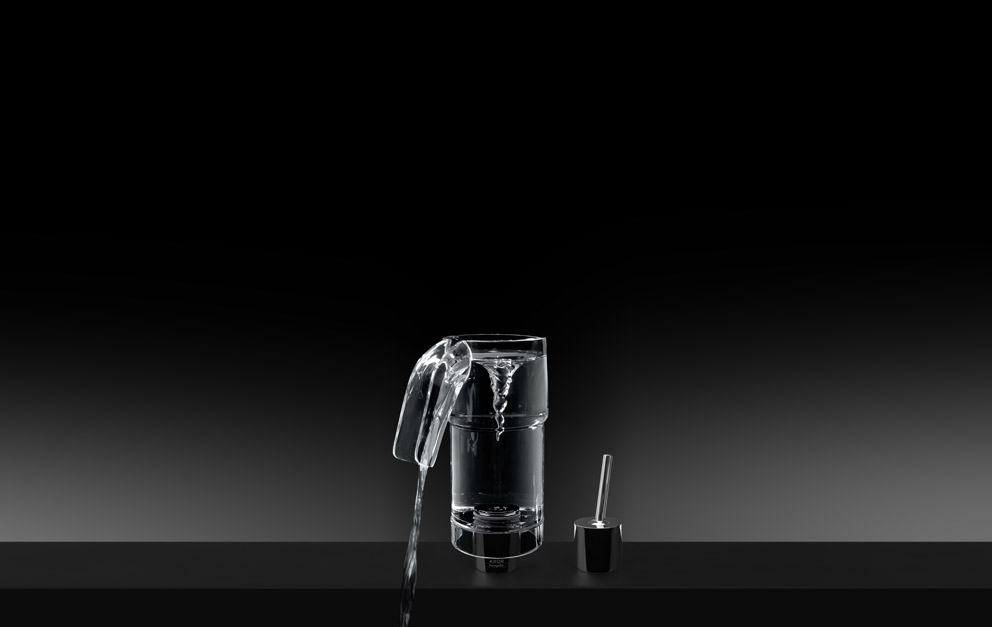 "Carafe" by Léa Pereyre & Claire Pondard. Carafe utilizes Axor’s U-Base system and its ability to plug and unplug. A clever spout hidden in the handle makes the carafe as functional as it is beautiful. Photo © ECAL/Axel Crettenand
Video © ECAL / Axor 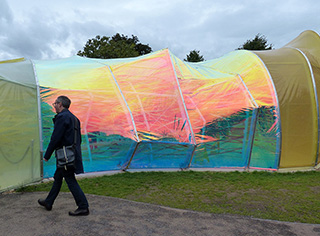 It’s not simple to make something simple

We visited the London Design Festival with a group of architects and interior designers and met Barber Osgerby, who in the form of “Axor One” are no also focusing on the bathroom. 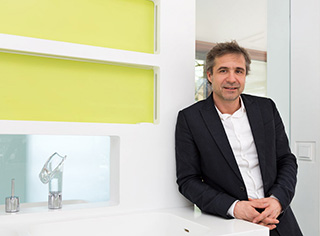 A vortex in bathrooms

In the form of the “Axor Starck V” fountain mixer, Axor, Hansgrohe SE’s design brand, is entering virgin territory and conjuring up a vortex in bathrooms. Thomas Wagner talked to Philippe Grohe, MD of the Axor brand, on flowing and calm water, on vortices and other ways of making water a sensible experience. 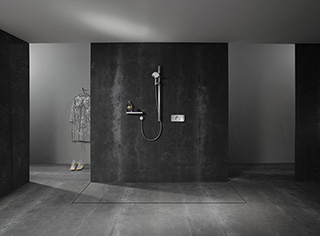 You don’t need much in a shower

Just what does a shower need for the daily ritual to please all the senses? Surprisingly little, the designers Edward Barber and Jay Osgerby decided.