"Engelbrektsgatan" is a renovation project involving a large 10-room apartment in a 1890s building in central Stockholm. The architects Bolle Tham and Martin Videgård Hansson, who were given carte blanche for this project, aimed to give the same attention to detail as when the house was first built - but this time with a modern and rational approach with particular attention to the client family's modern lifestyle.

The floors are made up of large varnished parquet tiles in an expressive pattern. Each room has his own bold colour, laid in such a way that the colours flow between the rooms and up along the walls, thus emphasising an entirely new set of proportions within the rooms. Doors no longer act as barriers between the rooms; it is the surfaces on either side of the door sill that connect the rooms. The parquet tiles are lighter in colour where the sunlight shines through the windows. Occasionally they retain their natural ash colour, particularly in the dining room with its dining table in the shape of a map of Sweden. In front of the open fireplace the parquet pattern forms its own, dark space, while flashes of light in the flooring continue past the panels and draw the eye up towards the full height of the ceiling. Green, yellow, red, purple, orange - the autumn leaves from Humlegården, the large park opposite the building with its hundred-year old trees, appear to have moved into the apartment.

"After a snowfall we noticed how the floor radiated a warm glow against the abstract maze of branches outside, creating an entirely new effect!" Architects Bolle Tham and Martin Videgård Hansson, Tham & Videgård Hansson Arkitekter, were given a free rein to renovate the new Stockholm home of Niclas Sundström and his family with its 10 rooms and 375 square metres. Mum, dad and their two small children had previously been living in London and Southern France and were looking for a home in Stockholm. Although no expense was spared with regards to the level of detail in the original building, and the skill gone into applying these details was second to none, the task was to replace yesteryear's easy access to labour with a more rationally generated approach. Not as much because of shortage of funding as for the need for a different kind of freedom, created without trying to dictate the lives of those who will be living here. The insensitive renovations that the apartment had been subjected to through the decades increased the architects' level of freedom. Restoration as a form of renovation was never an option.

"No, but by adding a new layer they are indicating what they hope the colours will do to open up the room distribution." This home dating from the turn of the previous century was built to suit the lives of the upper classes with a clearly defined use for each room while keeping the kitchen and servants at arm's length. The challenge for the architects was to adhere to the overall plan while adapting the home to suit the openness of the family living there 100 years later, just as "modern living" requires. The design of specific solutions for residents to interact in informal spaces makes for comfortable and natural living. In this respect the kitchen remains at the centre of the home, and the airy passages through the rooms stretch all the way to the bedrooms. The old kitchen situated at the back of the apartment has been transformed into a guest suite with its own kitchenette. The rooms facing the street and park contain the rhythm of everyday life - from the children's bedrooms and playroom to the library and the communal space of the lounge and the room housing the family's dining table - acting as a cosy continuation of the shiny kitchen with its focus on cooking or the more casual breakfast bar.

The saturated colour tones that have inspired the architects in an age of sterile minimalism have two predecessors in Swedish interior design: Firstly, Karin and Carl Larsson's sunny turn of the century home Sunborn in Dalarna. Secondly, the Austrian functionalist architect Josef Frank (national socialist's gift to Sweden), whose flowery, colourful interiors have continued to offer alternatives to "the home as a machine", artistically rooted in Anglo Saxon design.

"To us the main thing was to create an overall picture rather that seek out beauty in individual colours. Our client, the Sundström family, even left us in charge of furnishings. Much of the interior are new fixtures designed by Tham and Videgård Hansson, but the pair have also had the pleasure of putting together furnishings based on currently available designs."

"We chose only Swedish products and ordered all the furniture in white, even Josef Frank's walnut/alder table and his double depth Liljevalchs sofa, usually finished in his customary flowery pattern," they say. The home is almost ready for moving in; the family is currently familiarising themselves with the space during weekends and long weekends. The architects are of course welcoming the fact that the residents will soon be able to put their own mark on the space and stress that they are certainly not the kind of architects who want to dictate how residents should live their lives once they have moved in. 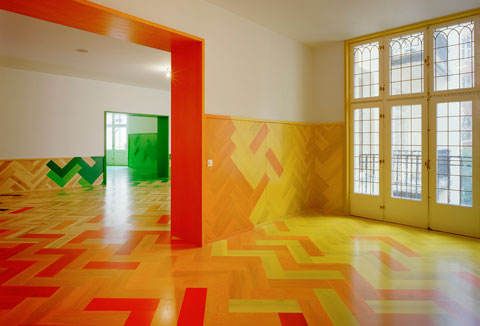 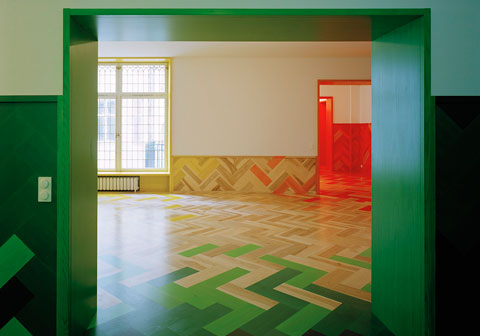 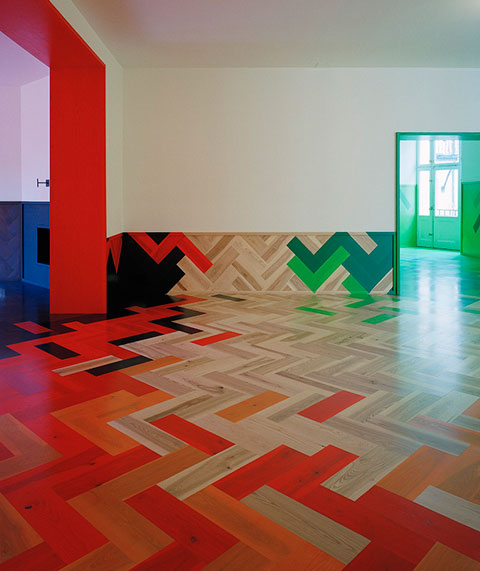 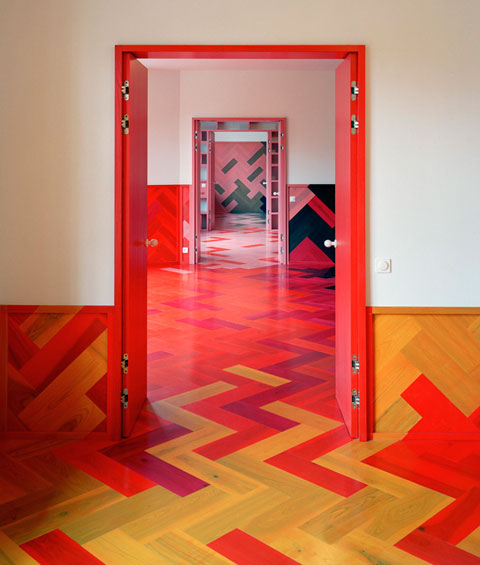 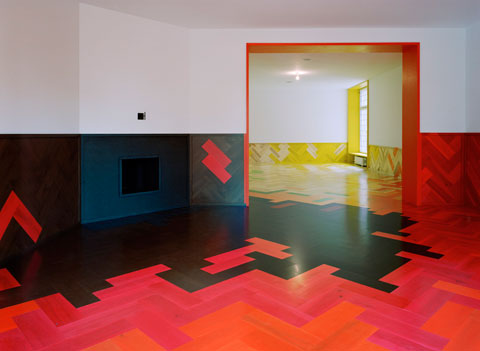 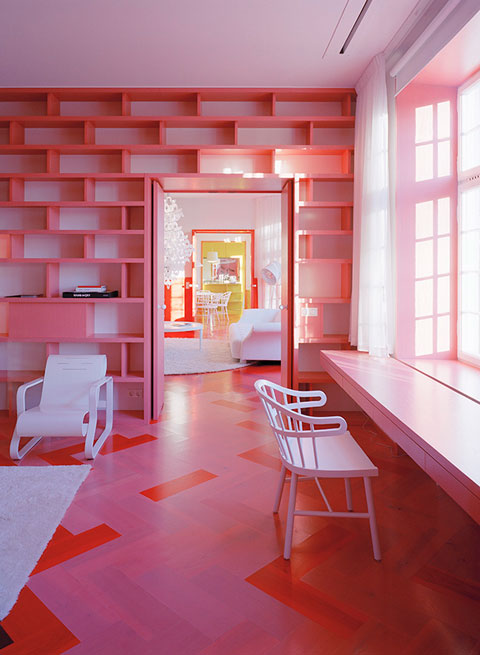 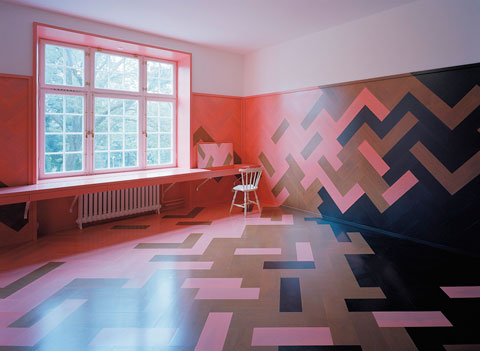 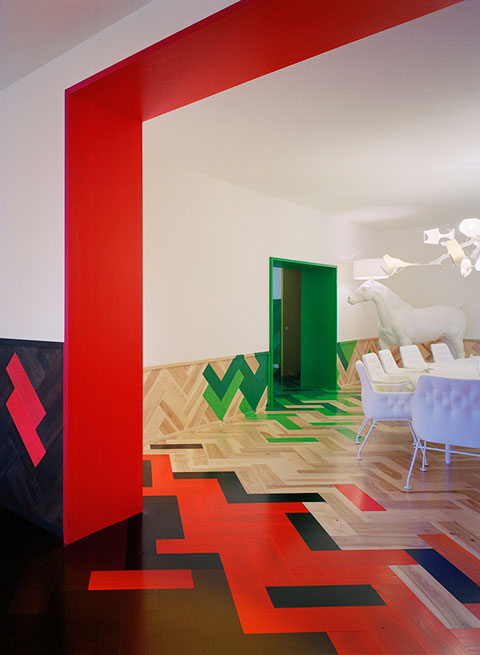 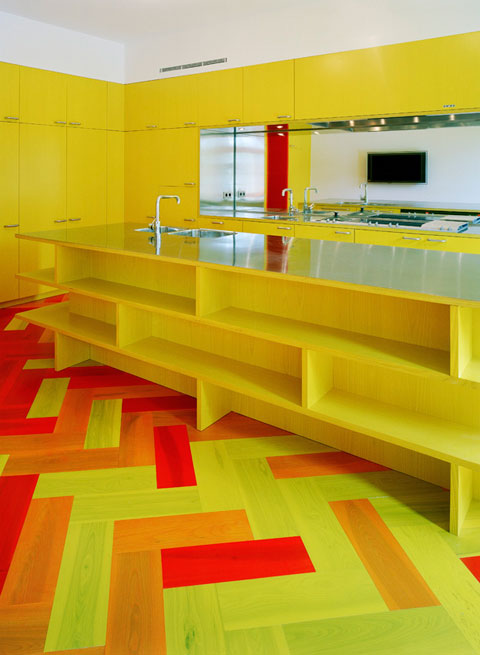 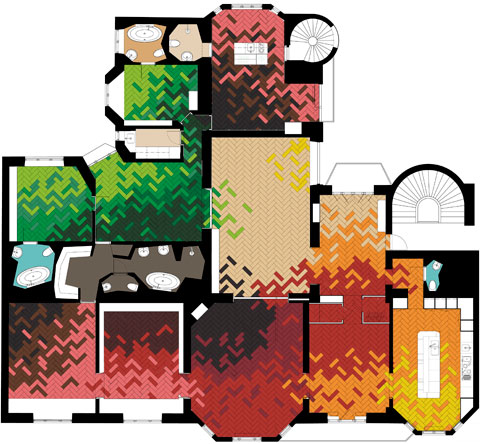 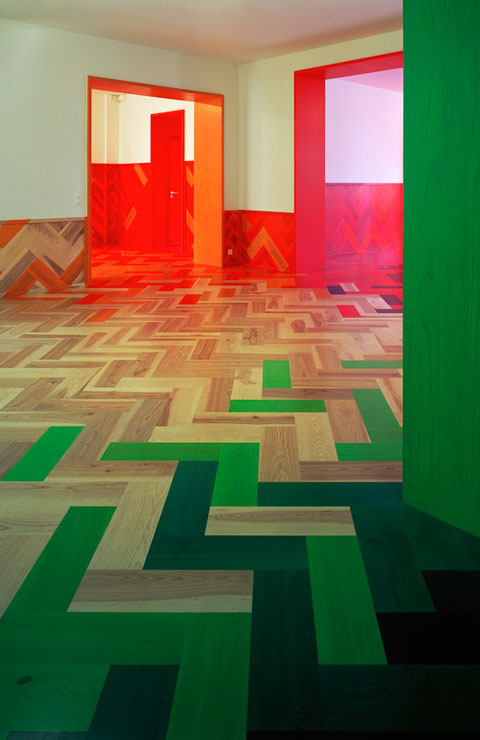 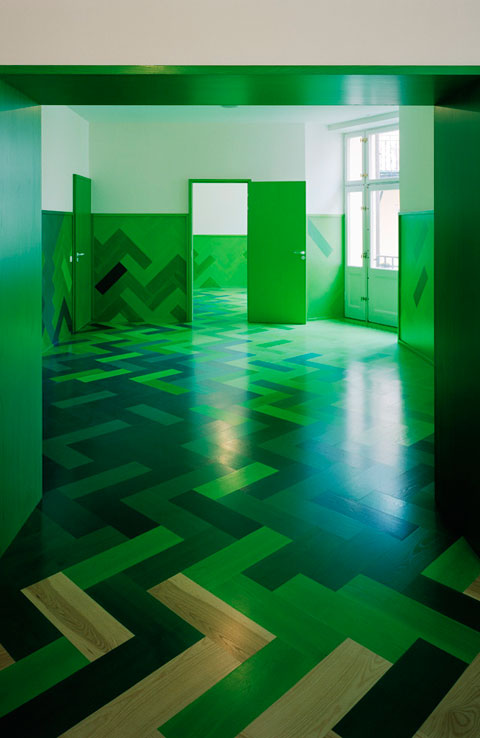 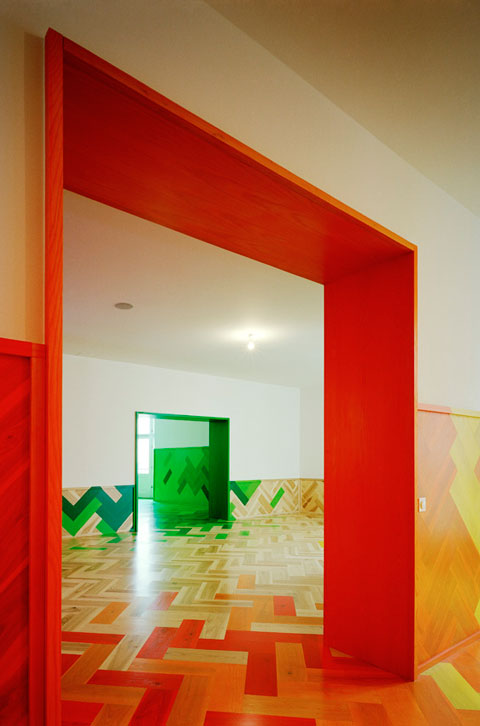 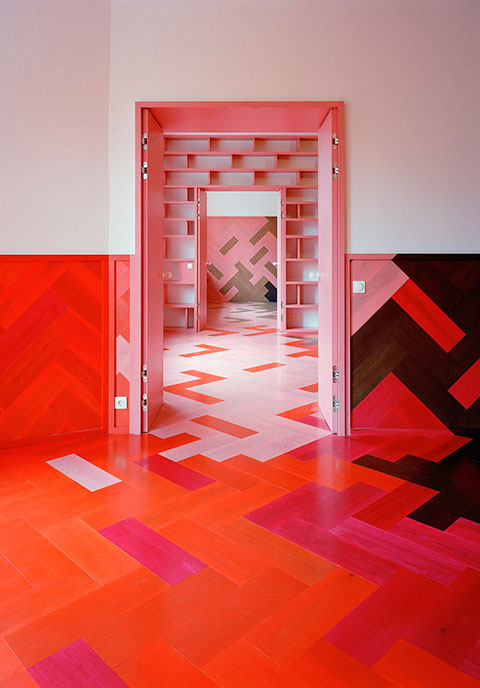 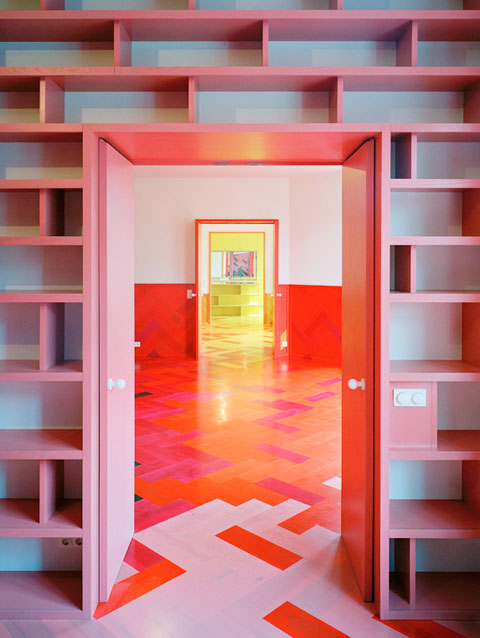 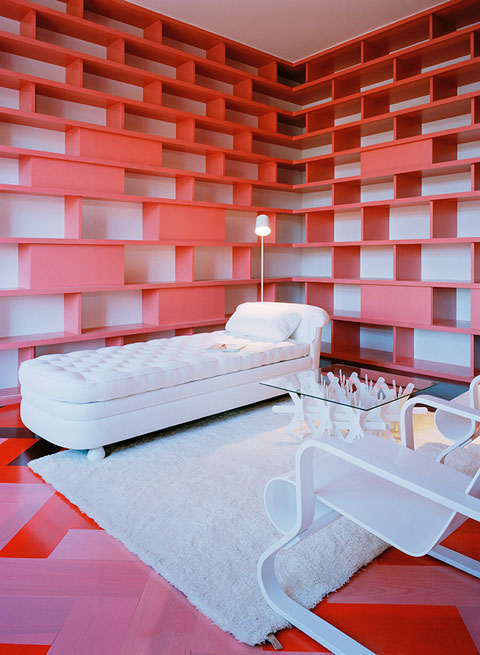 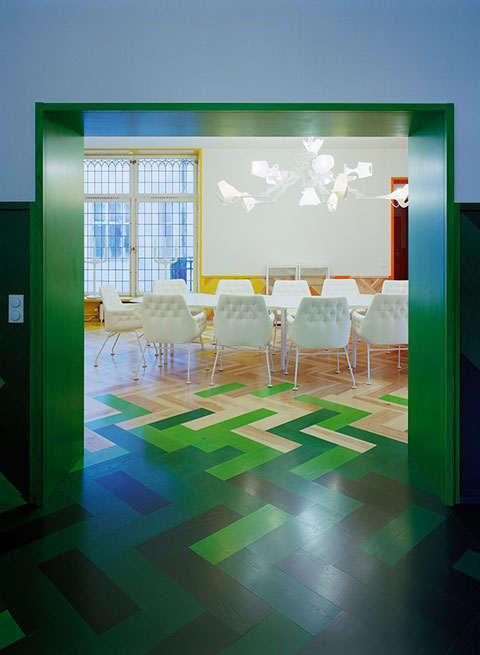 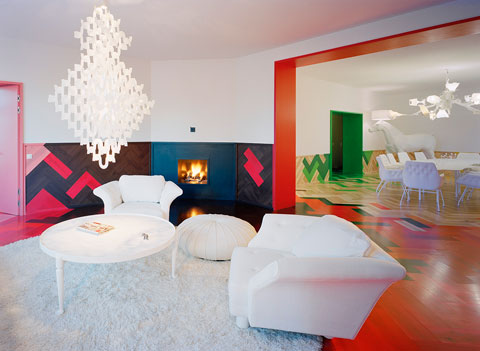 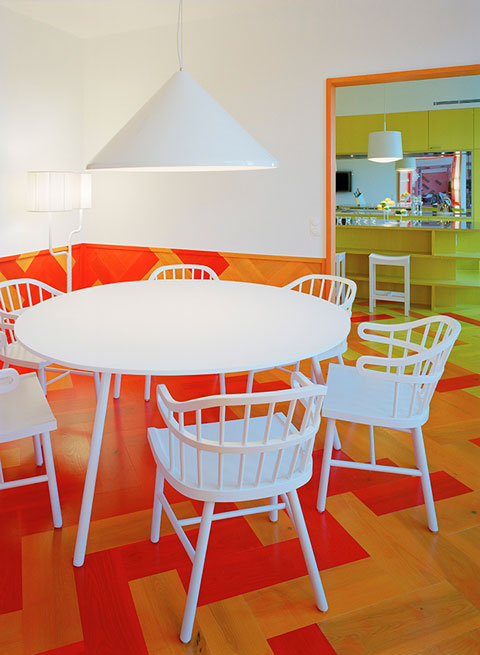 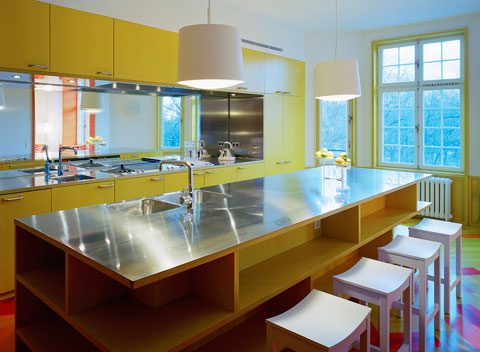 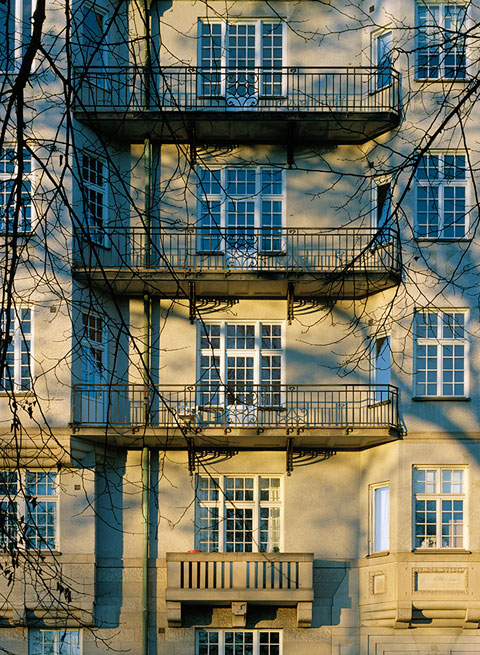