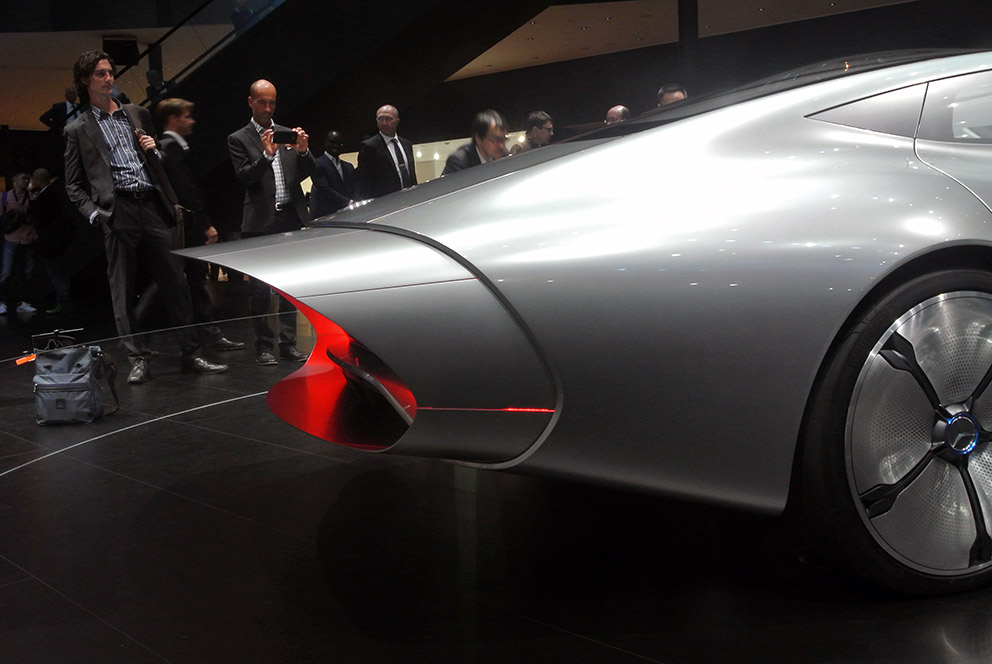 IAA for IAA: “Intelligent Aerodynamic Automobil“ is the name of the drop-shaped Concept Car by Mercedes for the IAA 2015 in Frankfurt/Main.
Photo © Thomas Wagner, Stylepark

Higher, faster, further, on land and against the resistance of the air – surprisingly little has changed of the customary patterns of auto-industry behavior. And this continues in 2015, when success is promised by offering even more horsepower for less fuel consumption, eco-conscious ingenious hybrid technology and more lightweight chassis through to seats thanks to innovative materials. There are SUVs wherever you look, small, medium-sized, large – or even super-large as with the brand new Bentley “Bentayga”. A glance at it leaves one wondering whether or not such a vehicle should simply be bluntly called an oligarch-mover? Moreover, many models, from BMW to Hyundai, now have a bend, or should we say a curve, at the hip, running beneath the windows, the idea being to create a more dynamic silhouette. Otherwise, to be somewhat sober about it: Design remains an important factor but for the time being once again takes the back seat to really powerful technology. And where designers are given more scope, the result is as always the same old Playstation-like extremes.

At any rate, wherever you look there’s a label declaring ‘innovation’, or slogans such as “New is relaxed” or “New is exciting”. But, hey, everywhere (and this depends on the price tag of course), you get more or less the same standard or more or less the same state-of-the-art technology. Which means that on closer inspection, the differences between the different vehicles or vehicle classes start to blur. The one or other difference probably only exists on paper, a material that is, after all, patient. And little has changed as regards another fact, too: The latest developments in the field of safety and comfort gradually trickle down from the high-end cars to the compacts, as has been the case for decades. Which in the final analysis means the smaller cars get pricier, but now bear the distinction of being “”premium” autos.

However, something has happened that has considerably accelerated the industry’s transformation from pure carmakers into “mobility providers”, namely digitalization. This changes the entire concept of the “automobile”, has embraced the system of individual automobility and is emerging as a key element of so-called progress. If one believes Matthias Wissmann, President of the German Automobile Makers Association VDA, as the world’s most important key trade fair shows that “digitalization of mobility is the mega issue that the auto industry is moving forward thanks to the swift innovations it is producing. Driving is as a result becoming safer, more comfortable, more efficient. The German auto industry alone will be investing 16-18 billion euros over the next 3-4 years in networked and automated driving.” Those at the helms of the large corporations gladly chip in and praise “total networking” and “absolute connectivity”. Were Filippo Tommaso Marinetti, that hot-headed Futurist and the leading guru of accelerated mobilization, to have attended one of the IAA press conferences he would no doubt have tried to blow them all up.

So what is the digitalization of the automobile all about? It is most definitely not just a matter of additional assistance systems for more safety, comfort and efficiency. The networked car will in future be able to find a free parking space itself, park in it, draw your attention to great sights, book hotel rooms, order concert tickets, learn its owner’s way to work, music taste and other habits, and it will gladly act as an MD checking on your health when you are at the wheel, meaning it morphs into a mobile interface and your virtual opposite. The auto sends and receives not only data, it also generates them. And the long-term goal is to exploit total networking to create completely self-driven vehicles.

What clients think of all this remains to be seen. What already seems clear is that drivers will not only forfeit control over their toys but that they themselves and their behavior will be monitored at all times – for example, by their insurance companies. But is this what we want? Does the transformation of the automobile from a symbol of freedom into one of safety and control indicate a fundamental change in society? Is personalization being proclaimed but our absorption into a swarm being prepared behind our backs?

Let’s let the future be the future for a moment and cast a glance at the interiors of the latest car models. What you see, alongside the many invisible assistants, is that digitalization is most in evidence as regards the controls, or rather interfaces, and first and foremost on dashboards. There are two surprises here. First, the layout is almost identical in all models. The more backward still offer drivers analog instruments, but the new standard consists of an instrument monitor and a tablet PC (as large as possible), in front of or in the middle of the dashboard. Second: Even if all the colorful symbols are dancing and flashing around in your face, permanently serving up new data, the current design and focus of interiors still denies the existence of the new future of automated driving otherwise proclaimed so stridently.
Anyone who thought industry would serve up any number of show cars in order to publicly ponder new vehicle concepts or at least possible changes to interior designs – thought wrong. Only Mercedes is making inroads in this regards, namely with its F015 research car, which was presented at the beginning of the year at the CES in Las Vegas. In fact, Mercedes is the only renowned carmaker that has dared move into imaginative and inspiring terrain as regards aerodynamics and interior design – with its Concept IAA (Intelligent Aerodynamic Automobile). A radiator grille like a whale’s baleen, elongated drop shape, hubs that close up depending on the centrifugal force, and a hatch that extends at speeds greater than 80 km/h, and together with the red of the taillights resembles a jet engine’s afterburner – there have been many less exciting studies.

Whether and when autos as we know them will be replaced by “digital transformers” is still a completely moot point. First of all, major ethical issues and liability constraints have to be overcome. And physics itself dictates narrow limits to any completely new architecture for interiors and new behavioral patterns. You only need to consult one of the component suppliers who are today already busy constructing dashboard panels and seats within the current spatial constraints to hear all about the limitations involved.

Over the next 30 years, or so one then gets told, the customary seat layout in vehicles will in principle persist. The reasons are as obvious as they are simple: Even if you are driven by your digital transformer and the car burns through the bends without human intervention, you’ll still need to remain buckled up. And unless you’re stuck in a traffic jam or in a parking space, you won’t be lying down but sitting upright, because the forces that occur in a collision hit a reclining passenger far harder. Which spells one thing and one thing only: We will in future possibly be reading newspapers during the downtown stop-and-go (maybe even in paper versions) or be able to (have to) check our mails – but initially not much more than that will change. In car interiors, in future the high end will all be a matter of superlative materials, designed in a flowing and sculptural idiom, but the basic concept will remain the same. If you have the requisite cash, you’ll even be able to “personalize” your auto. There has been little talk of personalization to date as regards the electronic helpers in the car. The appeal of being able to change the display’s color or having the interior lighting controlled by your favorite song will surely wear out fairly quickly? 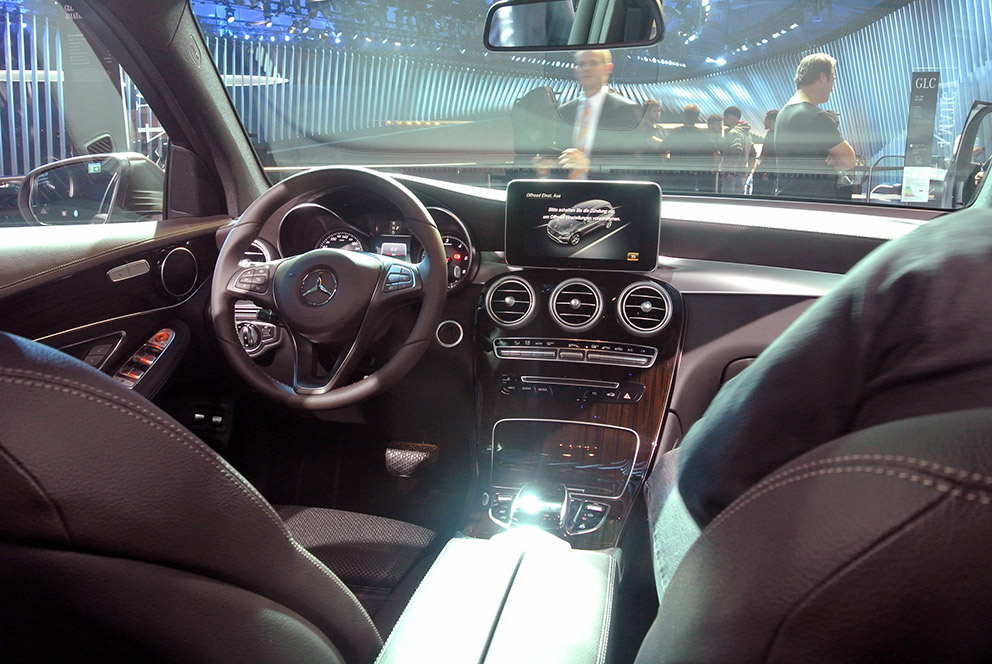 Regarding the basic schema, almost all interiors are similar nowadays: The new Mercedes GLC has its monitor typically on top of the car dashboard.
Photo © Thomas Wagner, Stylepark 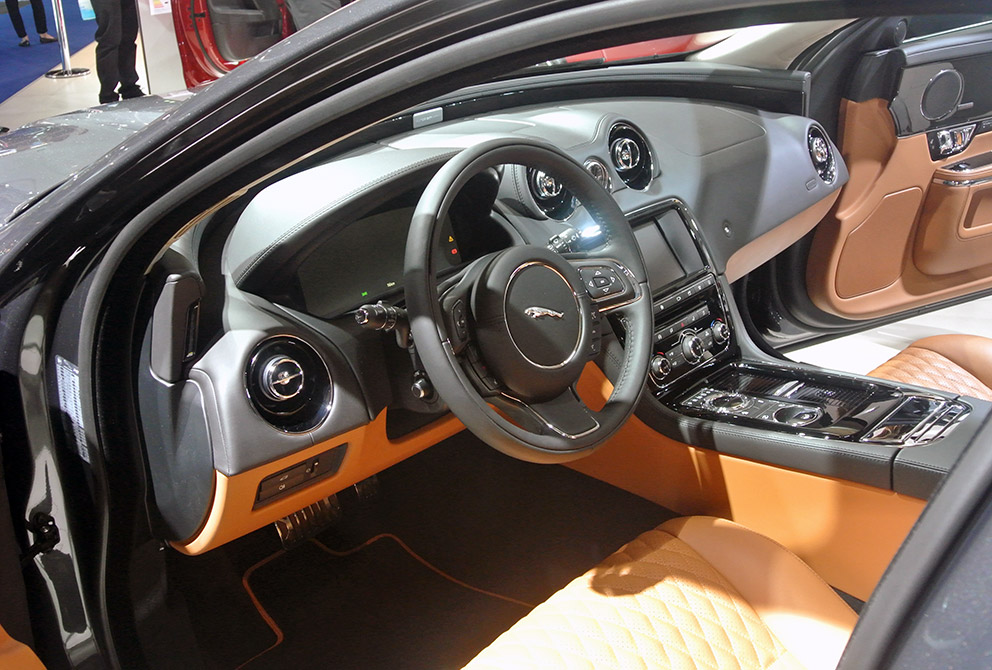 The new presented Jaguar F-Pace has its monitor below the air conditioning – integrated into the center console. Photo © Thomas Wagner, Stylepark 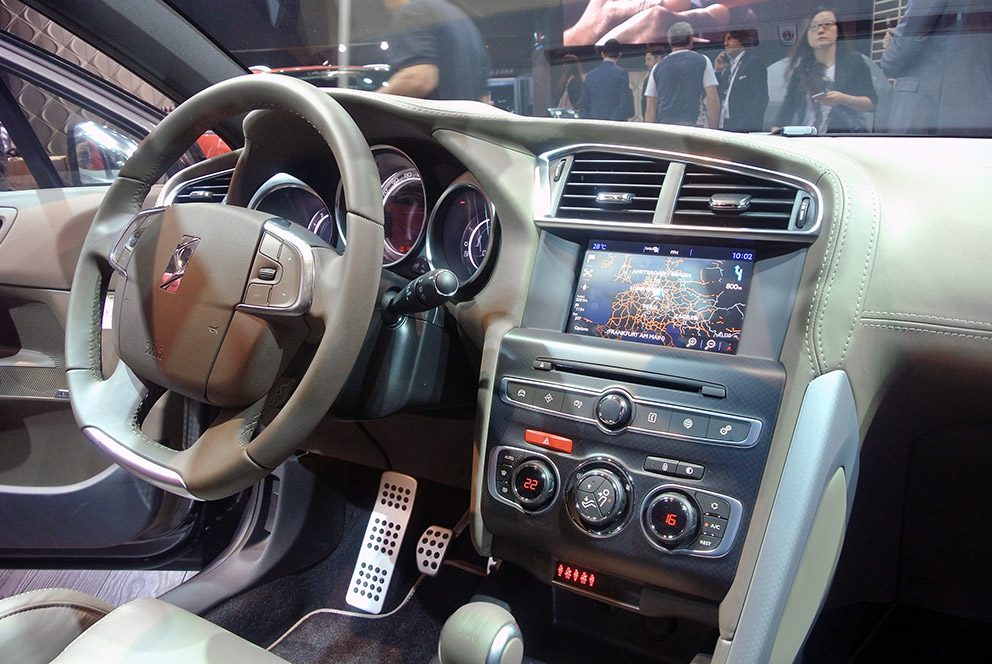 Citroën presents with its C4 a rather conventional design. Photo © Thomas Wagner, Stylepark 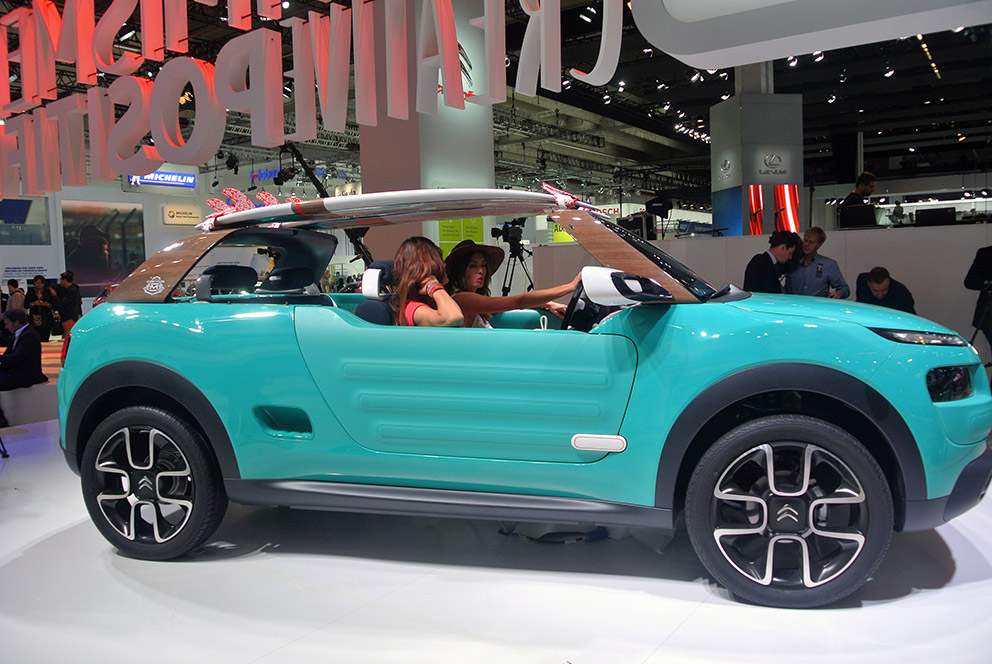 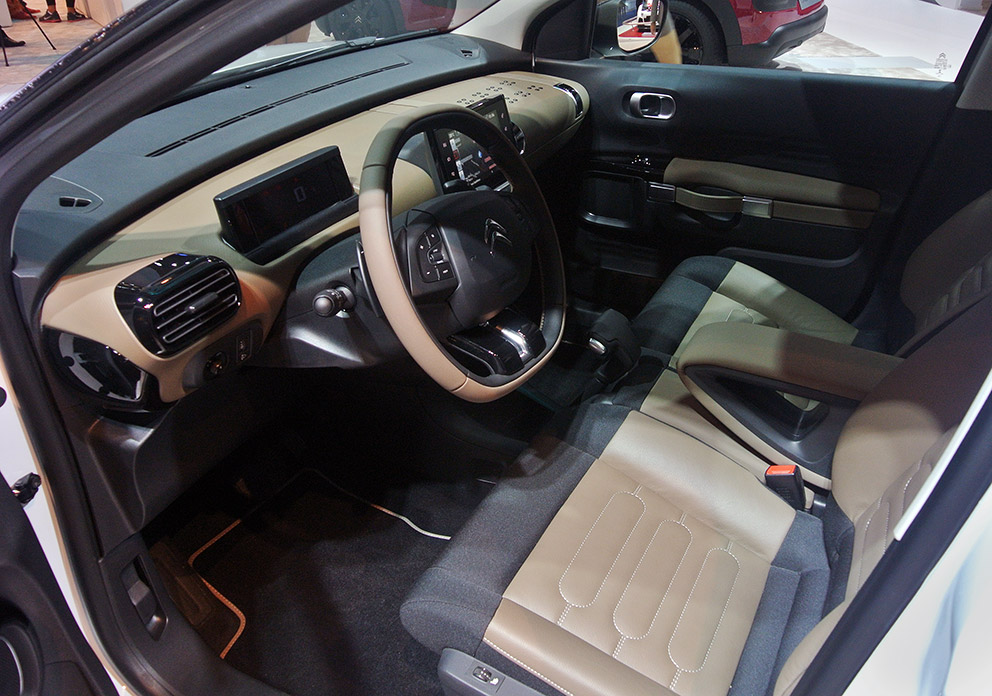 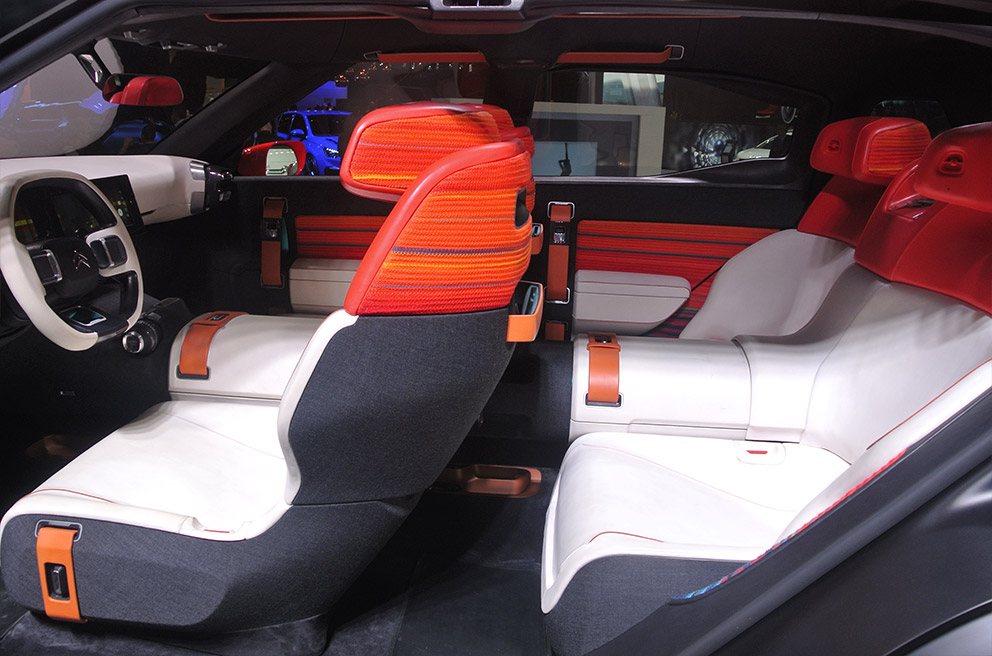 Martial, but with colored stripes: The interior space of the powerful Concept Cars “Aircross” by Citroën with “King-Size“ seats. Photo © Thomas Wagner, Stylepark 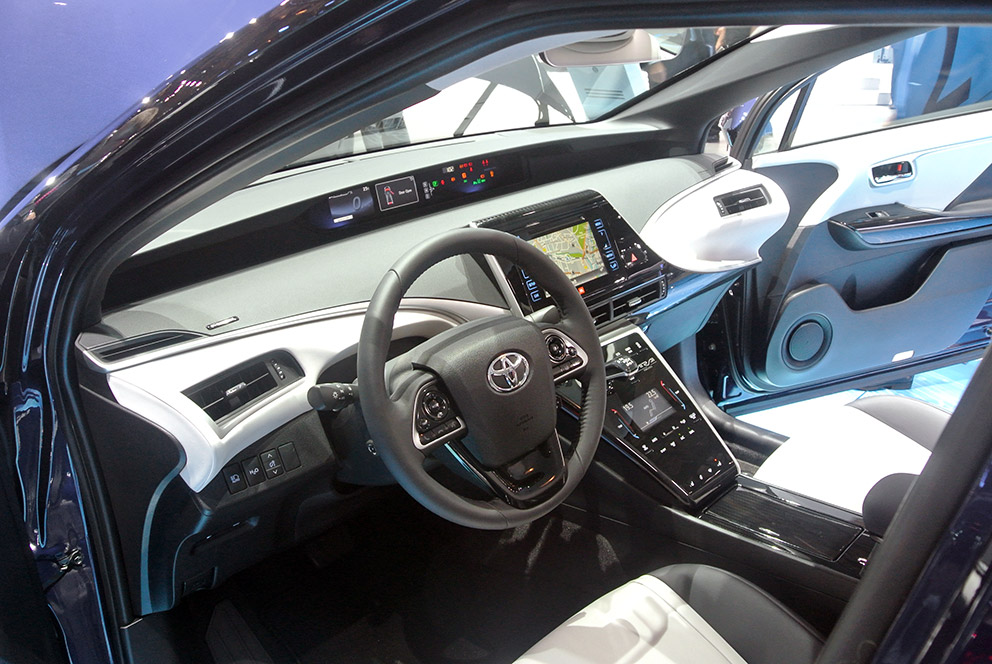 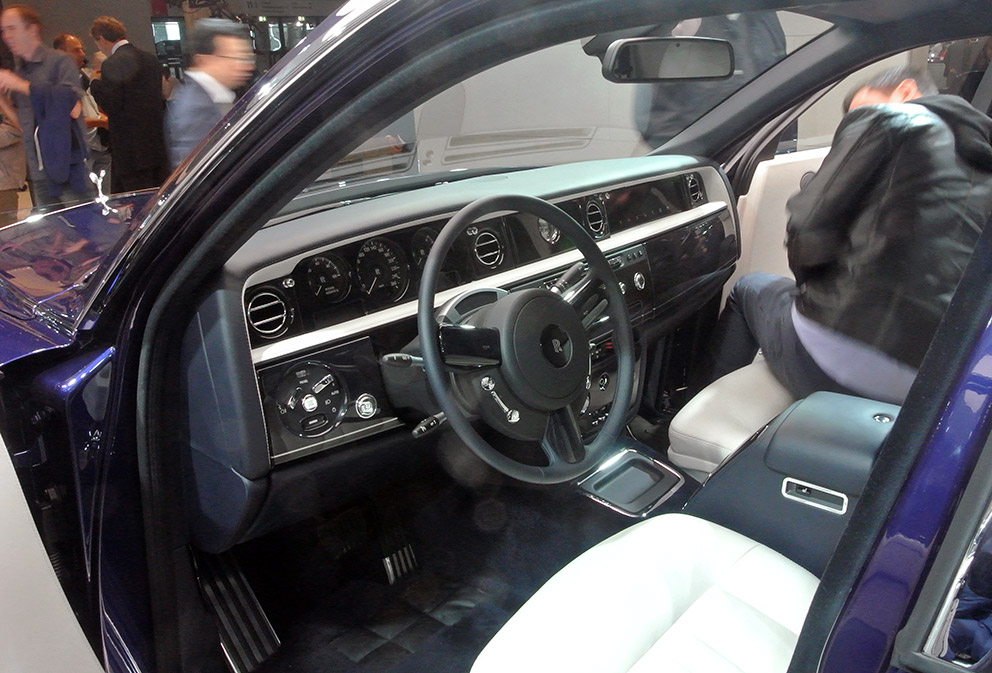 A very special board: the dashboards by Rolls Royce. Photo © Thomas Wagner, Stylepark 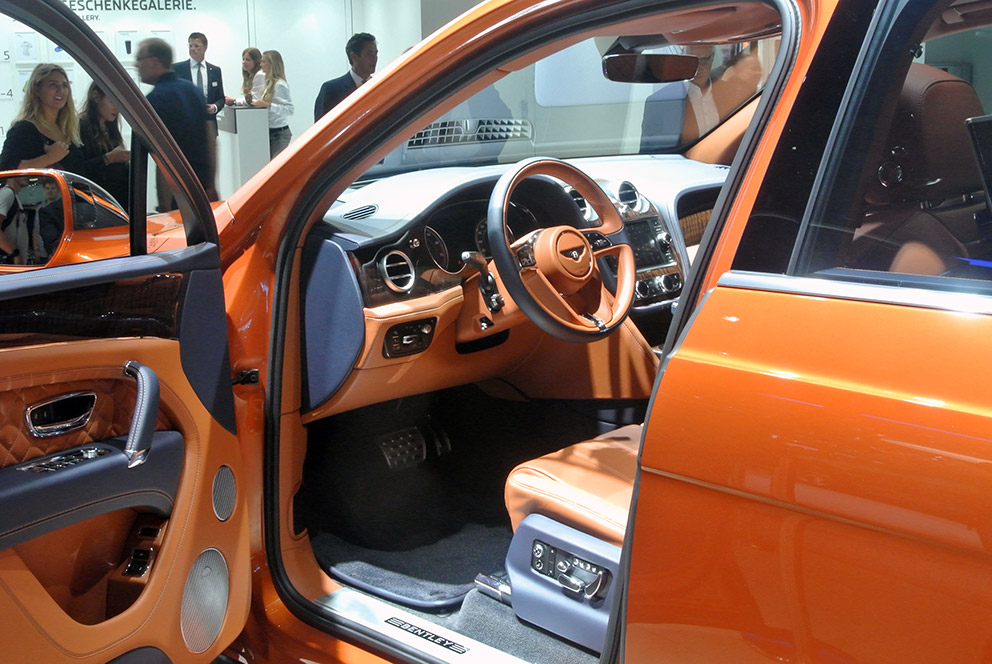 Everything is fine: Also Bentley designs a classical basic schema when presenting the interior of its powerful SUV “Bentayga“.
Photo © Thomas Wagner, Stylepark 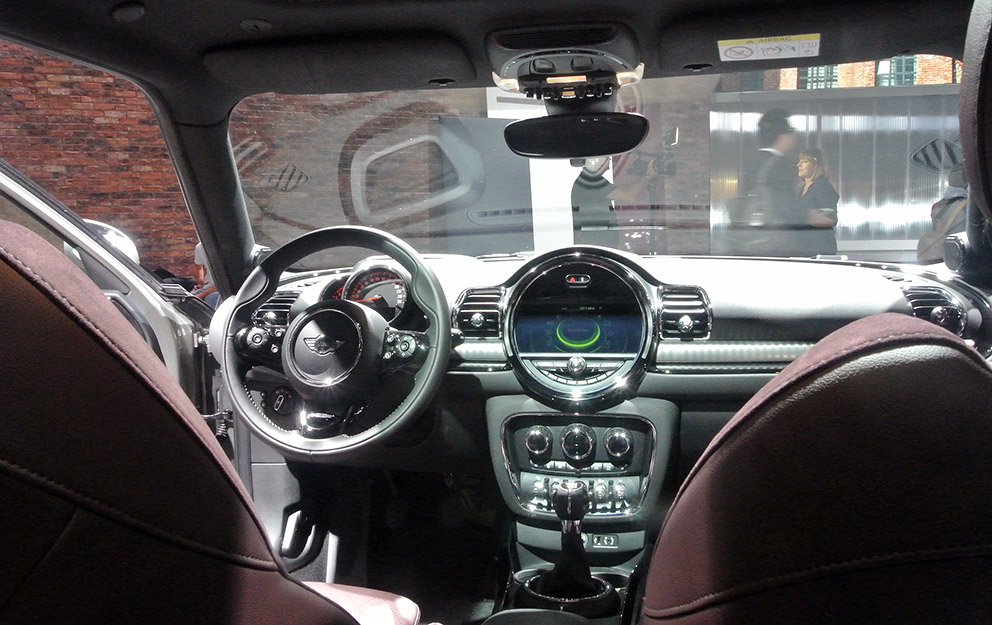 Although the circular instrument has mutated into a display without a tachometer – the interior space of a Mini still remains different. Photo © Thomas Wagner, Stylepark 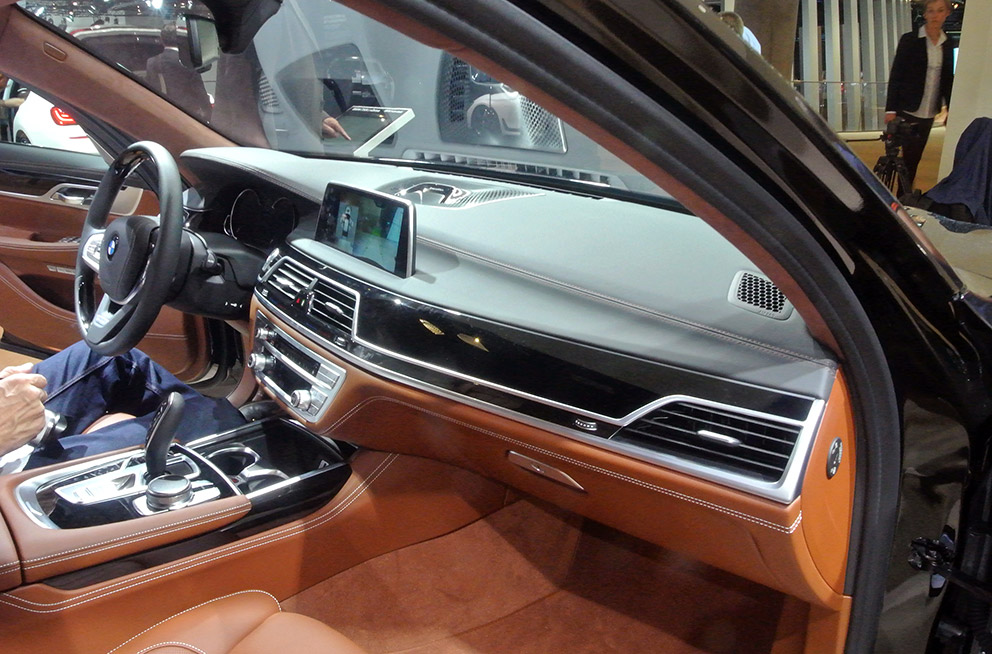 Big gesture: The new 7th BMW has a dashboard with an elegant curved shape. Only the display in fully extended position seems to be a little bit out of place.
Photo © Thomas Wagner, Stylepark 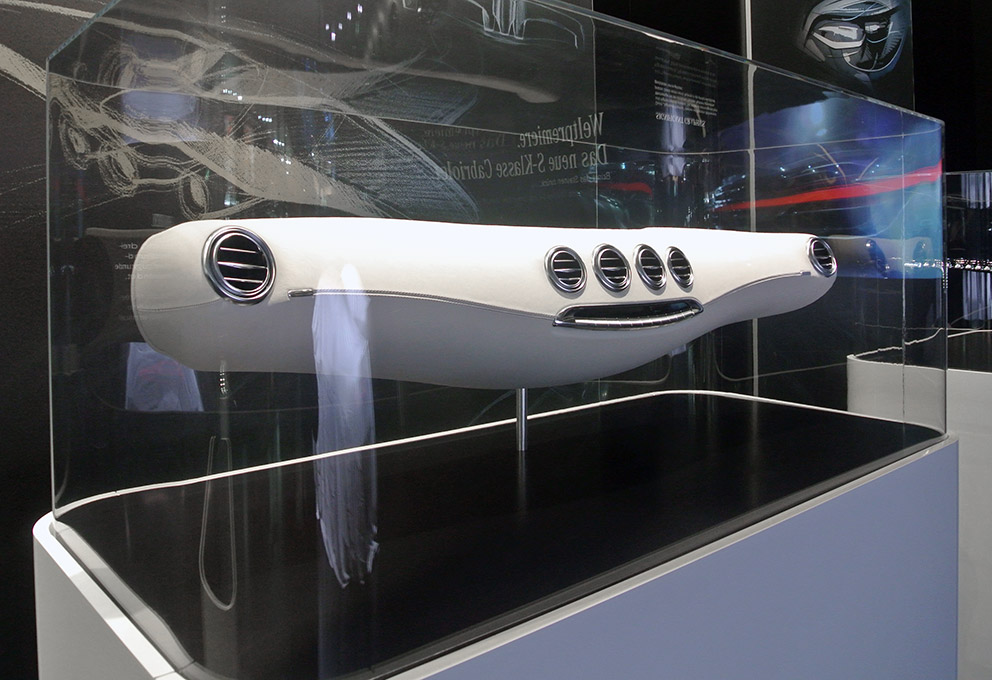 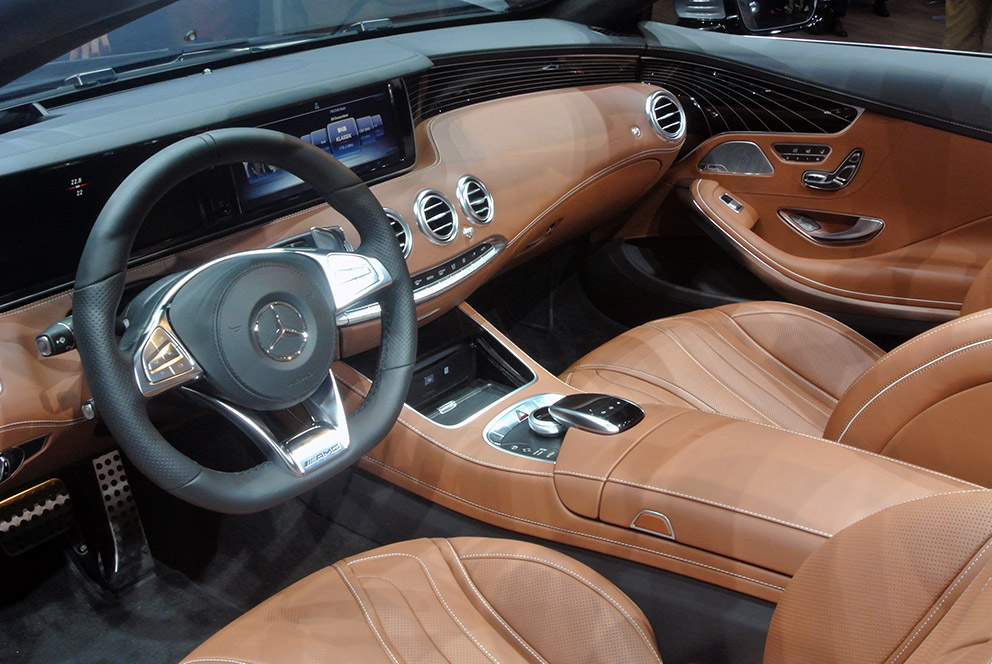 This is the look of “Freeform & Geometry“ at the the interior space of the new S-class of the cabriolet by Mercedes. Photo © Thomas Wagner, Stylepark 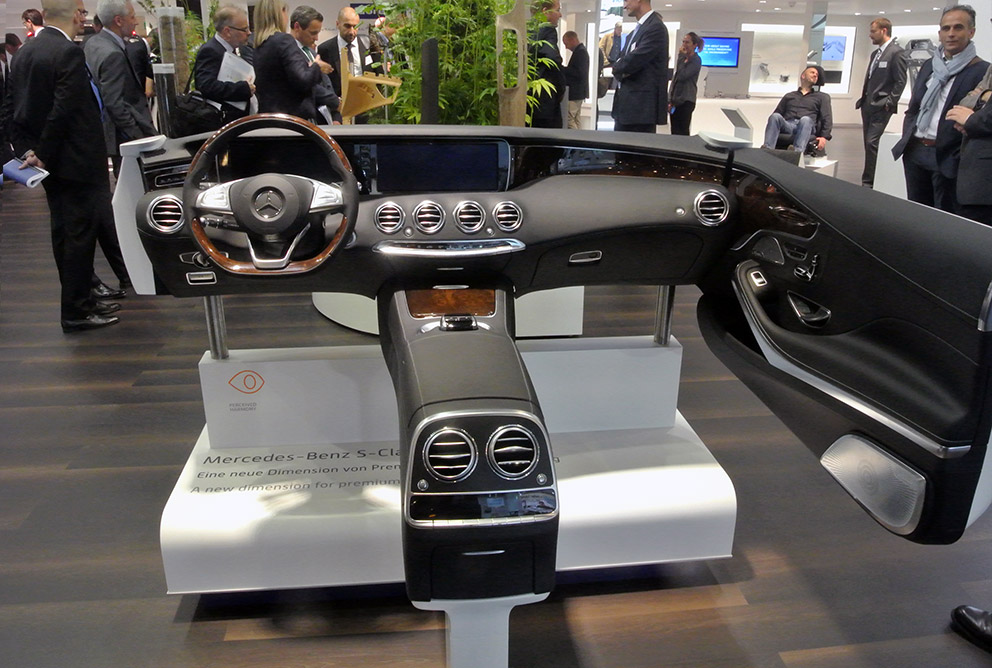 At the booth of the component supplier you can gaze at the complete dashboard – without the S-class surroundings. Photo © Thomas Wagner, Stylepark 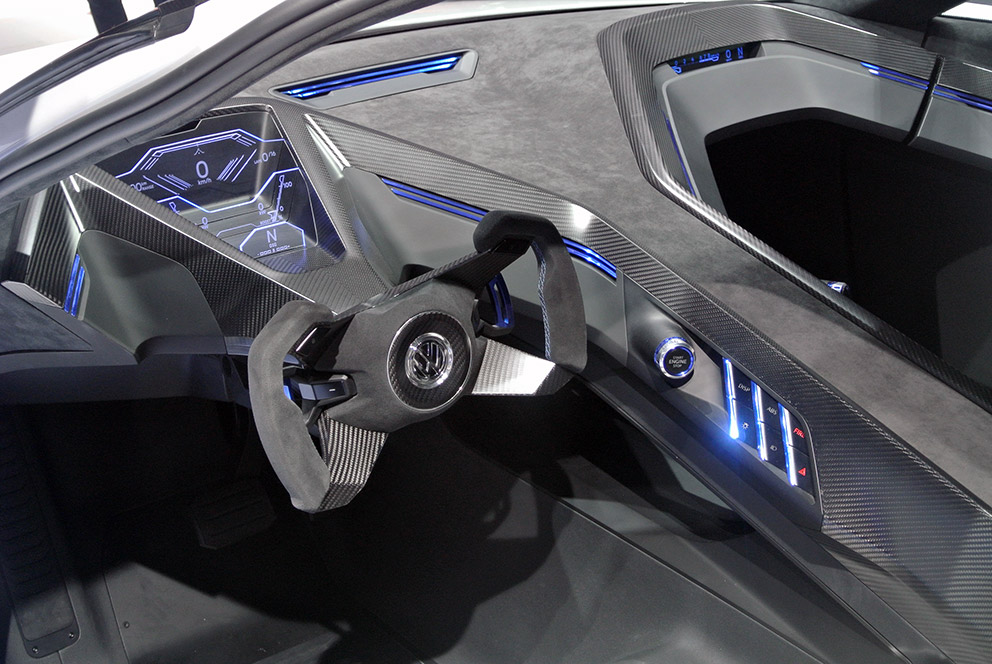 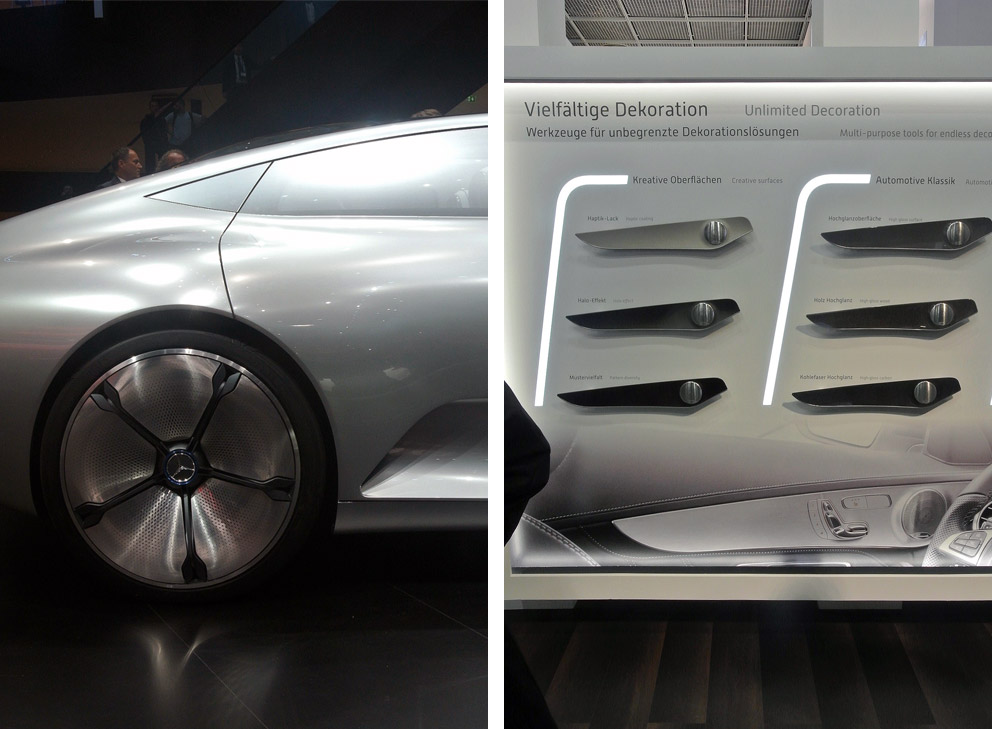 The Mercedes “IAA“ with a cw value of 0,19 the rims close due to centrifugal force (left).
The component suppliers are promising “unlimited decoration solutions” for the interior space (right). Photo © Thomas Wagner, Stylepark 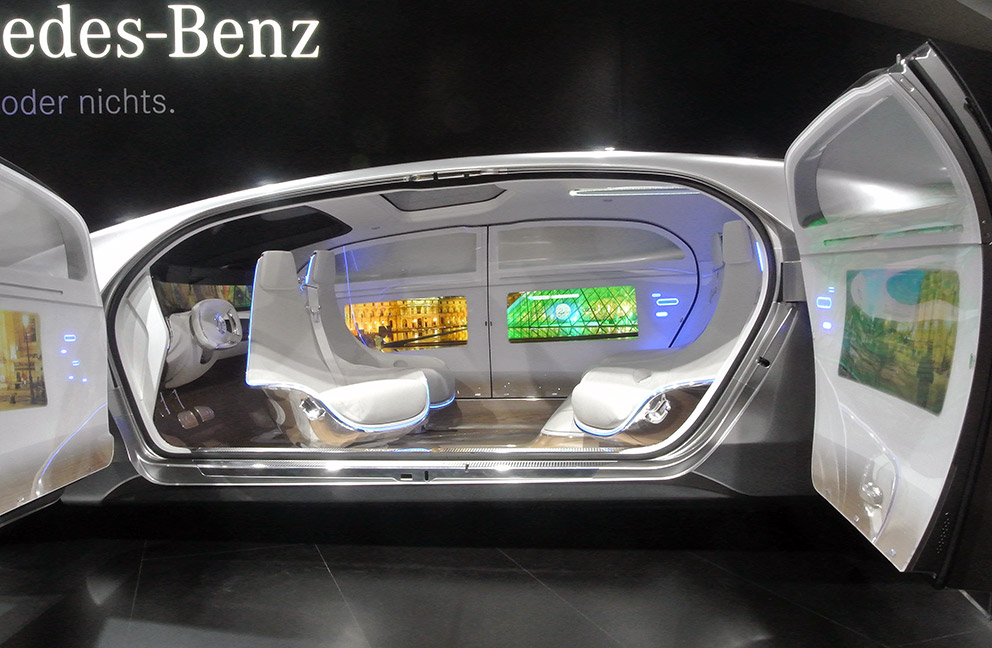 Close the windows, put on the displays: TheF015 by Mercedes – which was already presented at the CES in Las Vegas – shows, how the automobile industry imagines the future of piloted driving. Photo © Thomas Wagner, Stylepark 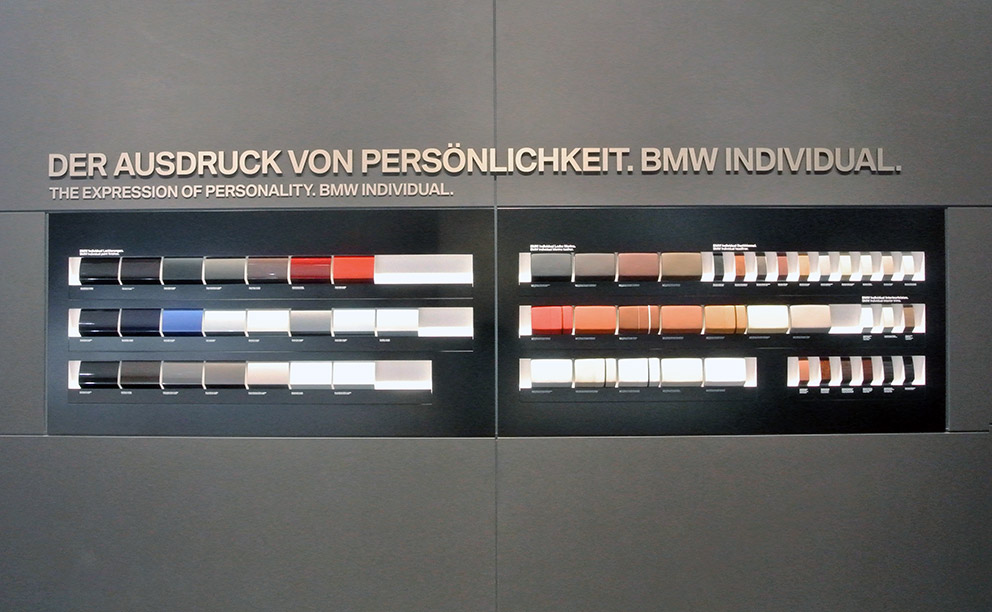 BMW in persona: Is individual driving limited to the choice of colors and the leather of the interior space in the future? Photo © Thomas Wagner, Stylepark
Advertisement