“Today carpeting is once again a design experience – even for those who have shunned textile floor coverings in recent decades,” says Jan Kath. “I am trying to bring the product into the 21st century and make it a consumer item.” The designer from Bochum and scion of a family of carpet dealers is one of the initiators of this carpet renaissance. Thanks to his hand-woven artworks (featuring traditional motifs from the Orient and a specially developed antique finishing technique giving the products a highly individual, vintage look) high-quality floor coverings have begun to receive more and more recognition.

In January of this year, around 40,000 visitors passed through Domotex’s doors in Hanover, the leading international trade fair for floor coverings. A total of 1,350 exhibitors from more than 60 countries pulled out all the stops, showing everything the field has to offer, while the trade fair itself focused on carpeting, parquet and laminate flooring from the premium goods segment.

Already in its fourth edition, Jan Kath returned for another collaboration with the fair’s organizers in the form of the “Souk Deluxe” special exhibition, its name an allusion to the bustling markets found in most Arab cities. This section, itself reminiscent of such a market square in its design, presented trends from the area of handmade carpets. These include photographic print effects and three-dimensional surfaces. All surrounded by top labels such as Hamburg’s Hossein Rezvani, Berlin’s Reuber Henning and Cologne’s Floor to Heaven – exhibiting an amalgamation of tradition, innovation, craftsmanship and high-tech.

One person who could perform this “blending” technique in his sleep is Jürgen Dahlmanns. It was eleven years ago now that the architect founded his company Rug Star in Berlin. Dahlmanns manufactures his products in Nepal and the Indian state of Rajasthan. He himself focuses on the use of these textile surfaces to portray movement and considers this new trend toward carpets and rugs, particularly the hand-woven versions, a manifestation of the modern-day desire to surround ourselves with things that exude individuality and character. For the Berlin resident vivid colors are all part of this – as is fringing. He rediscovered this once extremely common design element for his own work three years ago. Once made using the warp thread and thus always white, Jürgen Dahlmanns uses artificial silk for his fringing in all kinds of dazzling colors, only adding it to the carpet once it is otherwise complete. Tongue-in-cheek, he says: “With fringing you can dare to allow a touch of the bourgeois in your own home.”

The art of weaving

Arman Vartian, the creative force behind Vienna’s Vartian Rugs, takes a different approach entirely. Born to Armenian parents, he started out making classic Oriental rugs in the traditional family business Gebrüder Vartian before developing a new style 15 years ago. He began to design his own collections and send them to Nepal for production – today he employs 600 weavers in the small South Asian country. “Weavers are artists,” says Arman Vartian. “Good carpets are a true feast for the eyes, just like a painting.” One look at his work and you’ll understand his point. Made of Tibetan wool, hemp, stinging nettle, silk and linen, his carpets have a classic look, but on closer inspection they reveal street art or graffiti patterns, henna-like decoration, damask patterns or motifs by Viennese silkscreen artist Andreas Reimann. “The most difficult pattern to create is a circular pattern,” explains Arman Vartian – of course he has various such carpets in his portfolio. Weaving has now been declared an item of World Heritage by UNESCO and Vartian’s stand makes it abundantly clear why: Here you can get your hands on a piece of ancient craftsmanship, premium quality in the truest sense of the term.

Plenty more examples of flooring that is by no means passé, but progressive and trendy, can be found on stands from manufacturers in the field of laminate and parquet flooring. Power Dekor Europe, a subsidiary of a Chinese company, makes flooring from bamboo, lending their products a rather differentiated look. Whether the finish is light or dark, or with a more or less structured surface look, all depends on how long the split bamboo shoots are subjected to the high-temperature steaming process. The advantage of using bamboo is its rapid growth rate, such that the material can be harvested and processed after just three to five years. Bamboo scores another point for its extremely high durability and the resistance of the resulting surface.

Polish manufacturer Baltic Wood boasts over 300 different wooden flooring designs in its product range, so it is understandable why they are counted among the world’s most dynamic manufacturers of three-layer parquet. The material composition used includes, among other things, spruce, which lends the parquet a greater degree of flexibility. Their collections are continuously tweaked and reworked and, every two years, subject to a complete revamp.

Nature as a model

In 2013 Kaindl, which currently serves 35 percent of the world market share in the field of laminate flooring, has turned its focus to creating new surface structures for its laminate, wood veneer and cork flooring products. The Austrian firm draws its inspiration from nature and is now lending its flooring a more authentic and natural appearance than ever before. The used look is particularly popular at present, namely in combination with “natural touch” surfaces, which thanks to specially developed finishing techniques feel just like they look: natural.

Kaindl and Baltic Wood were just two of the premium manufacturers to take part in the special show “Flooring Deluxe”, which sounded out the boundaries of interior design and where possible extended them. Some pulled it off well, others not so much. “I don’t mean to sound judgmental,” explains Stefan Diez, “but there were some companies that simply lacked experience with such projects.” The Munich-based designer who was commissioned to design installations for Halls 6 and 9 at Domotex did however take a very pragmatic approach to the realization of the project: “It was never about the products themselves, but rather highlighting different perspectives,” says Diez.

Especially in this light, the collaboration between Baltic Wood and Mark Braun could indeed be described as a success. The Berlin-based designer took the “Concept Room” assigned to him and created a presentation of wood parquet which he had embossed with a pattern modeled on wood’s irregular DNA structure. Stefan Diez was won over by the design even in the early design stages: “A well-laid parquet floor also means that it doesn’t directly touch the wall, but features a kind of ‘moderation’ at the point where the skirting, stove or fireplace begins. This has fallen victim to the high rates charged by tradesmen, so the embossing technique could offer an alternative.” In any case, Baltic Wood was thrilled with the idea and has already shown great interest in initiating further collaborations with Mark Braun.

Major carpet manufacturers such as Dura and Vorwerk also showed a great deal of enthusiasm. Behind the factory doors at Dura, based in the German state of Hessen, the carpets are in constant motion throughout the production process. Hundreds of rolls transport the freshly tufted textile on its long route through the production halls to the dye works. It was at this point that designer Steffen Kehrle was able to intervene with some rather unconventional methods. The Munich-based designer used perforated pipes, fire hoses and squeegees (to steer the dye) to splash plenty of dye onto the carpets. The splashes and streaks left behind lent the floor coverings in Kehrle’s “Concept Room” a certain charm familiar from Action Paintings of the 1950s.

Vorwerk was paired up with Normal Studio from Paris for the project. Jean-François Dingjan and Eloi Chafaï worked with a plethora of images such as microscopic photographs of blood cells or marine organisms. Thanks to CNC cutting technology, these patterns can be cut from carpets with different piles, rearranged and as a result the advantages of a carpet that runs wall to wall are brought together with those of a classic runner. The results are reminiscent of corals, forming their own design islands, whereby they come full circle – coming back to Diez’s credo that a carpet can do wonders for the structure of a room.

It was in fact the topic that lent such abundant inspiration to wooden and laminate flooring manufacturers, namely nature and naturalness, that also formed the creative seed for two of the most original “Concept Rooms”: first, Tomás Alonso’s collaboration with producers of laminate flooring Classen. For London-based designer Alonso, his work with the company threw up the question as to why such flooring attempts to replicate nature so impeccably and why we are unable to just take on a whole new perspective. In each case he took two panels of laminate flooring and joined them together to make one “plank”. He then sealed the exposed edges with a plastic green profile, finally transforming this “wood” into a hunter’s post – fantastic!

Photographer Martin Fengel and artist Martin Wöhrl adopted a similarly cryptic approach when designing their “Tree trunk sculpture”. The duo, both from Munich, arranged the laminate flooring panels by Kaindl, which are incidentally barely distinguishable from real wood, such that in the end they assumed almost the exact shape of real tree trunks.

We’ll have to wait and see whether the “Flooring Deluxe” show was simply a one-off experiment for Domotex, or more. Indeed, Stefan Diez has reached the conclusion that we pay far too little attention to flooring in general and that the topic deserves much closer consideration. In the lead up to the fair he had commented that even a spirited failure would be ok, but he doesn’t need to worry himself about that any longer. His final conclusion: “Design is communication – it was fun.” 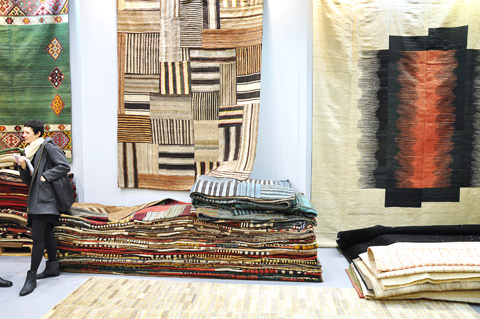 The company Edelgrund is well known for their special mixture of new design elements and traditionally made knotting handcraft, photo © Robert Volhard, Stylepark 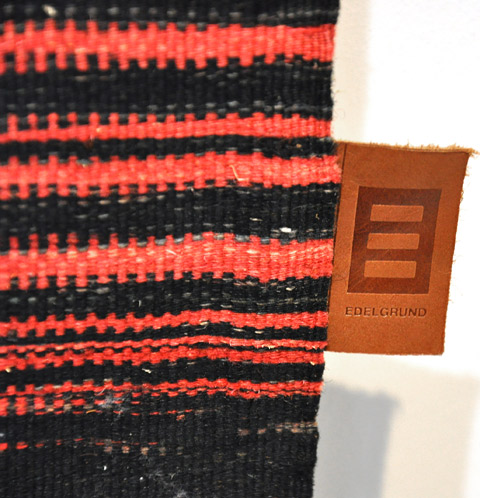 Carpets made by Edelgrund at the Domotex 2013, photo © Robert Volhard, Stylepark 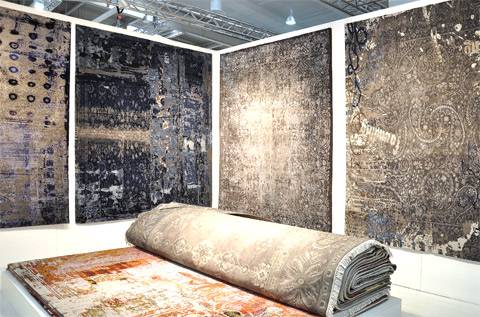 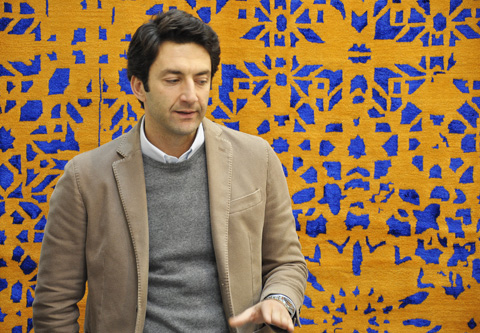 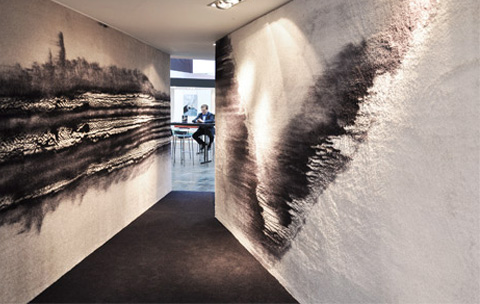 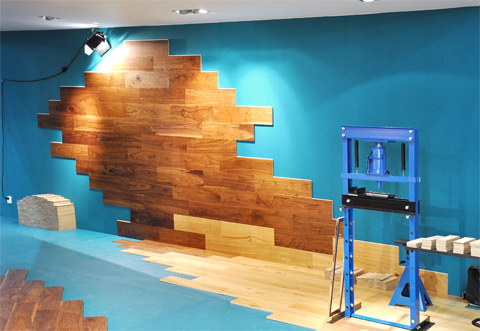 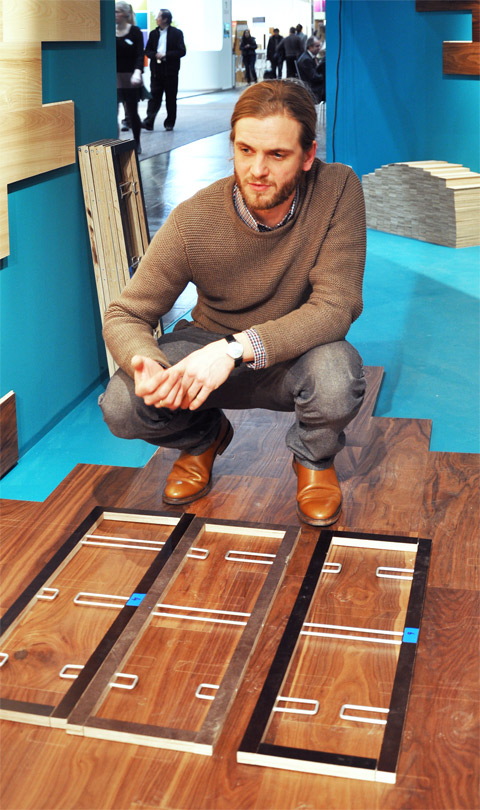 The DNA structure of wood was the inspiration for the parquet floor created by Baltic Wood and the designer Mark Braun, photo © Robert Volhard, Stylepark 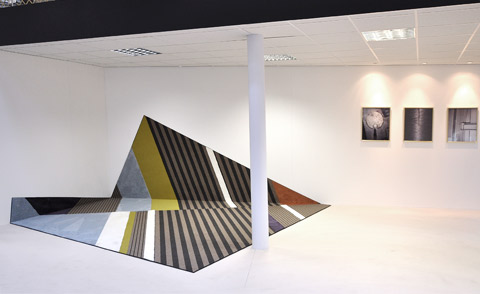 For the designer duo Fengel and Wöhrl it is very important to deal with the topic “flooring“, photo © Robert Volhard, Stylepark 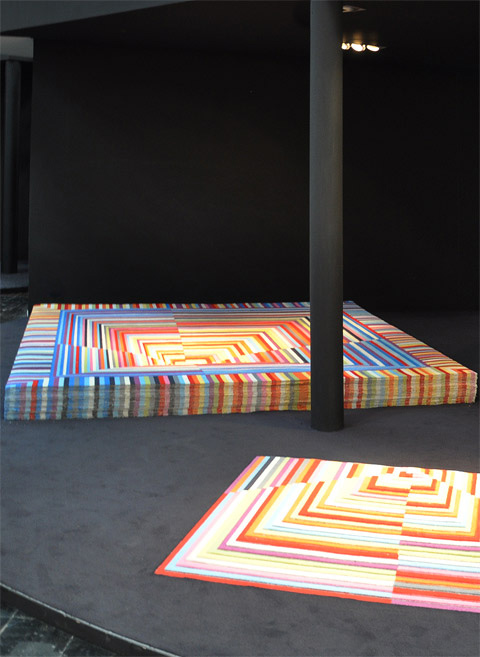 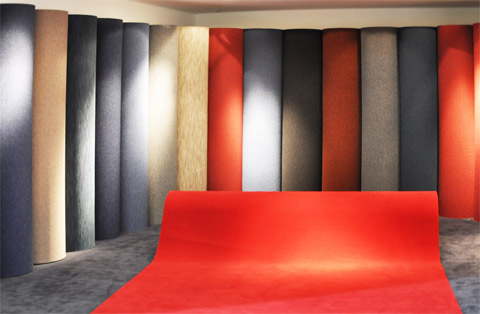 The Icelandic designer Brynjar Sigurdarson created together with the manufacturer Robusta an installation, which visualises the production process of the carpet fabrication, photo © Robert Volhard, Stylepark 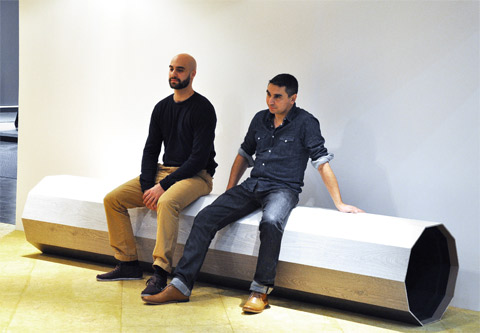 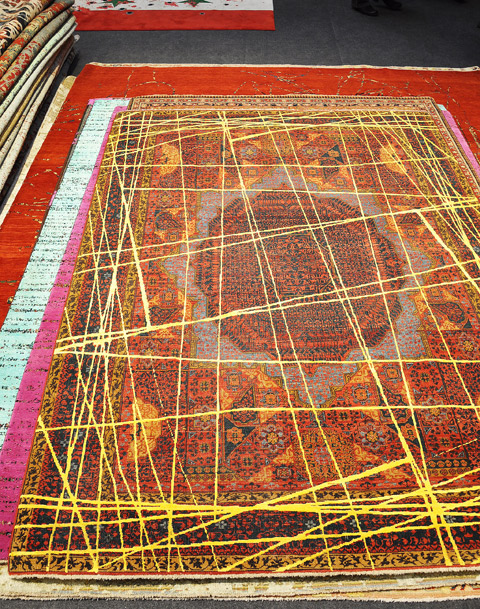 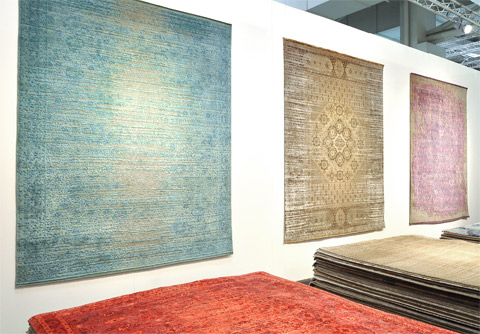 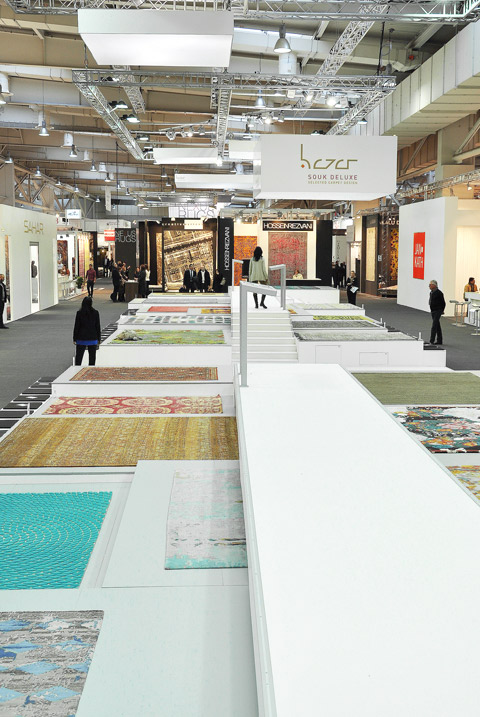 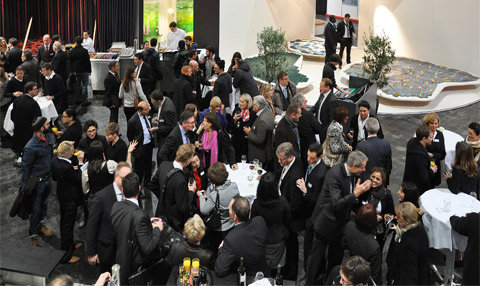 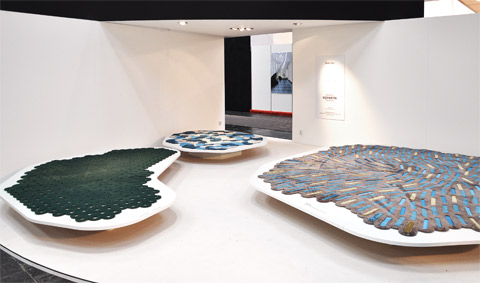 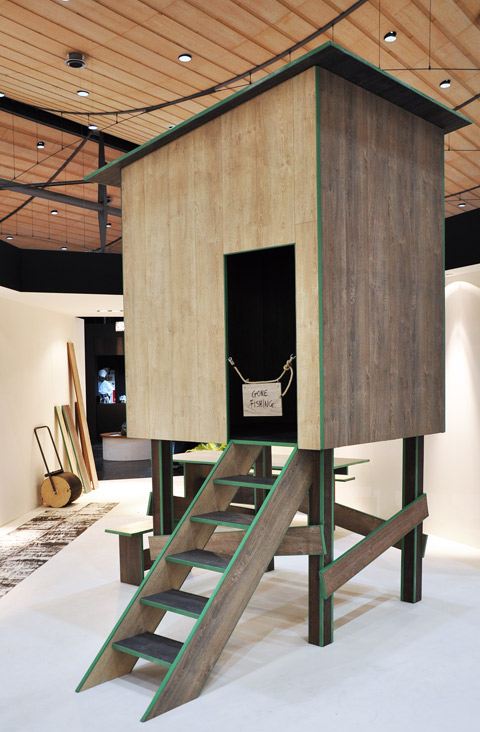 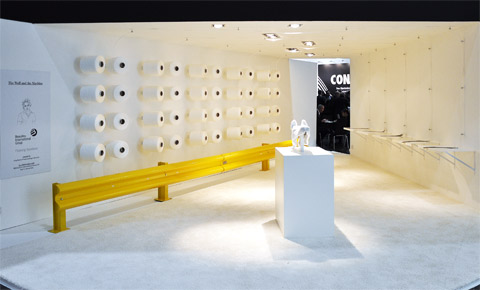 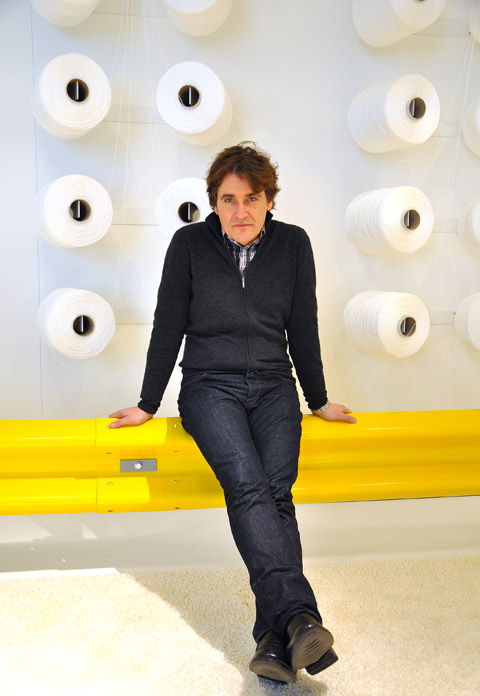 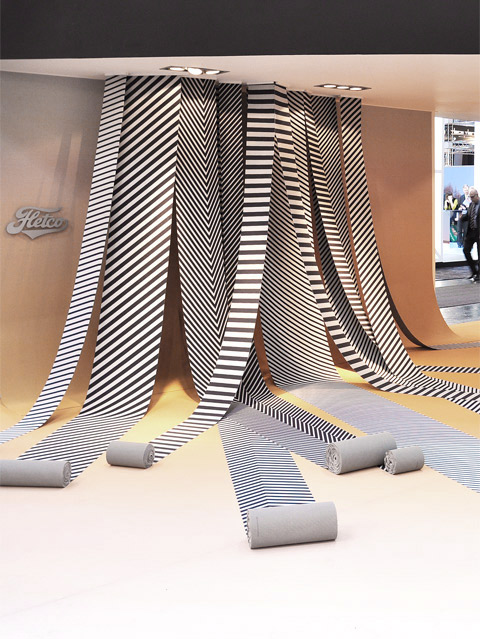 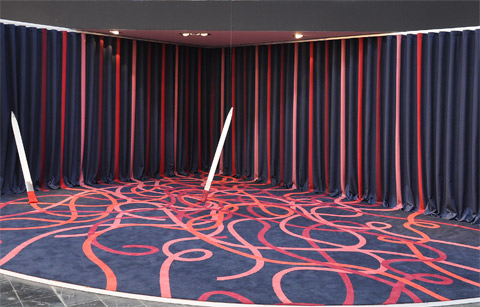 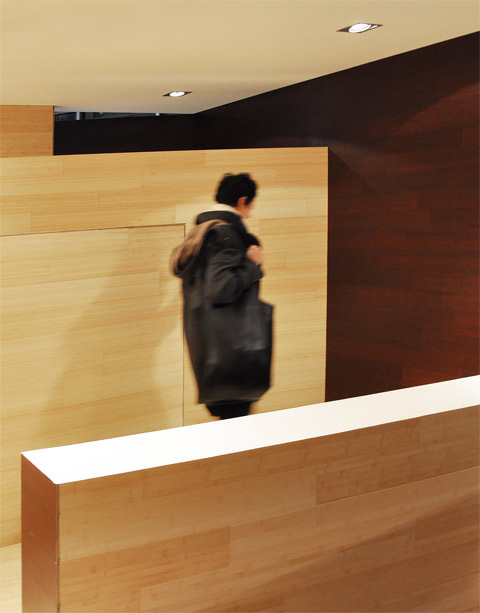 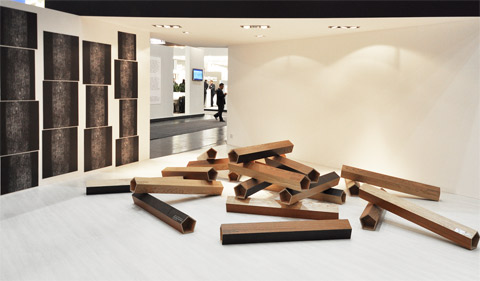