Not everything was loud and brightly colored

“Frankfurt 1980–1989” is the fourth volume in the series of architecture guides on Frankfurt by Wilhelm E. Opatz. Our author Leonie Köhren researches the history of 20th-century urban design and taking a closer look at the publication.
by Leonie Köhren | 11/19/2020

Without doubt, post-Modernism is still one of the most controversial phases in 20th-century architecture. People were already bored with its historicizing and increasingly playful stylistic vocabulary back in the mid-1980s, meaning that the movement’s one-time pretension to give modern architecture, which had ended up in a blind alley, a design facelift and to revitalize it with a lively approach laden with associations, sank into complete oblivion. Indeed, even today the architecture of the 1980s is almost exclusively associated with a stylistic vocabulary largely characterized by irony and the use of cheaply-executed formal quotations. However, and particularly in recent years, a surprising change in the perception of this architecture has come about, one that has not only been debated in specialist circles but has also reached a wider audience. In this connection, the spotlight has also fallen on the processes of change undergone by post-Modern buildings – due, in no small measure, to our increasing distance from an era now considered a closed chapter. One example, dating from 2014, is the bailout of Michael Graves’ Portland Building in Oregon, which was under acute threat of demolition. This represented one of the first public campaigns to preserve a post-Modern building. In Germany, too, there is an increasing interest in the era and in identifying those of its buildings that are worth preserving.

Not without reason, therefore, the 1980s architecture in Frankfurt has also started to receive more attention, after all, the latter banking metropolis boasts probably the most impressive example of that multifaceted architectural culture in Germany. After decades of focusing on functional urban planning after World War II, a large number of architecturally ambitious buildings were erected, edifices which, with their extremely varied approaches, can certainly be seen as key works of German post-Modernism. No other German city boasted either a comparable concentration of examples of the implementation of the ideas advanced by American post-Modernism, or specimens of such high quality.

This being the case, it comes as no surprise that the latest volume in the series of Frankfurt architecture guides, “Frankfurt 1980–1989” edited by Wilhelm E. Opatz, is exclusively devoted to this important and highly diverse era of building construction. The edifices erected at this time explicitly focused on the cultural structure of the city and, most importantly, on buildings put up in Frankfurt’s Old Town, including the Schirn Kunsthalle, and the Saalgasse. This was a building project realized as part of the Dom-Römerberg competition launched in 1979, as were the Museumsufer (riverside museum mile) on the banks of the Main and the Messegelände (trade fair grounds). With the concept for the Museumsufer, which brings together all kinds of different museums on both shores of the Main river, what came into being in the mid-1980s was more than a new cultural focus for the City of Frankfurt to complement the city’s service industries. Simultaneously, a collection of post-Modern buildings unique to Germany arose, one aimed at attracting an audience as international and interested in architecture as possible. The new buildings on the Messegelände, including the Torhaus (gatehouse) and the Messeturm, the trade-fair tower, in turn, not only very much characterized the1980s cityscape but also came up with new answers to the challenging construction assignment that is the high-rise.

However, the focus of the new architecture guide is not on these programmatic buildings, most of them designed by internationally famous architects. It is true that the striking museum buildings in Frankfurt, most of them which can be classified as post-Modernism and representing groundbreaking examples of this phase, are not ignored – for example Hans Hollein’s Museum für Moderne Kunst or Paul Kleihhues’ Archäologisches Museum. However, this architecture guide tends to focus more on the kind of everyday architecture that often receive less attention. The wide range of examples of this kind of architecture included demonstrates particularly well to what extent post-Modernism made itself felt in all kinds of different areas of construction and walks of life.

One or two buildings are presented as examples of each decade – as well as residential buildings, the guide includes banks, a community center and a care home. Even if the reasons for choosing a certain building for a particular year do not always appear completely consistent, the sheer variety of forms of architectural expression and the quality of the examples chosen is impressive. Nevertheless, at first glance, most of the items chosen do not immediately call to mind the kind of playful architecture that is usually associated with post-Modernism. According to the author, Wilhelm Opatz, the decade will never be able to entirely shake off its “bright and paradisiacal quality” but, at the end of the day, in his opinion the 1980s are, when all is said and done – as the architecture guide makes clear – “just as fascinating and diverse as the decades before”.

Buildings such as the Feuerwehr-Gerätehaus (fire station, 1981), for instance, planned by Frankfurt’s Building Department impressively illustrate that even standardized buildings characterized by simplicity and functionality are capable of deploying shapes that are as important as they are individual. In the same way, the Municipal Education Authority building designed by JSK Architekten (1983) demonstrates that in the 1980s even buildings that initially seemed extremely uniform could possess qualities all their own if – as with this complex – supposedly monolithic structures relied on varied façade details and differing window shapes. The fact that even with building commissions with a severely limited budget, it should not be an impossible task to produce the kind of architecture that is both functional and imaginative is illustrated by the daycare facility for children by Christoph Mäckler (1989), which, at the time, was produced as part of a comprehensive program to erect children’s daycare facilities for which the Building Department was responsible. Taking account of the relevant functional specifications, here the architect made a “child-friendly” design and an emphasis on rooms that it is possible to apprehend with the senses the central starting point for his design, a design of a quality that, even today, is seldom to be found in buildings of this kind.

With some buildings, such as the Deutsche Bank Towers by ABB Architekten (1984) an additional historical classification within the relevant building genre would have been desirable since high-rise architecture in particular plays a significant role as far as Frankfurt is concerned and furthermore comparisons would have revealed the extent the new Deutsche Bank buildings definitely heralded a change in high-rise architecture, which no longer took its lead from the international style but gradually started to assume its own shapes. Bearing this in mind, it would also have been easier to understand the new Landeszentralbank (Hessen State Central Bank, 1988) building which, as a counterpoint to the usual high-rise shape and a post-Modern version of a bank building, can be considered one of the most important buildings of the era. Everybody should view the interior of this vaulted glass hall, flooded with light, because in this instance a surprising diversity of shapes meets a seemingly endless wealth of materials to be found in almost no other bank building. In this case, the architects have employed practically the entire gamut of post-Modern stylistic choices, thus creating an unmistakable “relic of the era”, the sight of which can, as Opatz believes, give people pleasure, even 32 years later.

The appealing complementary texts which graphically describe the architecture, both in the way the functions are classified and, in its design and structure, make a major contribution to the reader gaining a lively impression of the item in question – despite the sectional drawings of the building usually being only sketchy. The articles by Adrian Seib stand out from the whole in particular, because the latter succeeds in precisely accentuating the elementary qualities of the architecture in question and portraying it extremely vividly without neglecting the important facts, such as how the relevant building came into being. However, readers will look in vain for the kind of ground plans that would be necessary to understanding certain complex structures and to knowing where the different functions were located. However, the images chosen usually offer interesting perspectives and sections, as well as fascinating details which really do encourage people to go in person to find out more about the relevant building.

The architecture guide is complemented by insightful essays and interviews explaining the social dimensions of the 1980s, for example by means of the so-called village of huts protesting against the Startbahn West runway (1981) which has once again acquired significant topicality nowadays, or by means of Rainer Werner Fassbinder’s controversial play “Der Müll, die Stadt und der Tod” whose premiere in 1985 was obstructed by Jewish residents. Unfortunately, there is no mention among the projects presented of the Judengasse Museum realized shortly afterwards although, together with the Stadtwerke (Municipal Utilities) building, it is one of the most expressive pieces of postmodern architecture in Frankfurt. Even if the architecture guide does not focus on the striking postmodern examples in Frankfurt’s museum landscape – something definitely worth mentioning in this context would be the Liebieghaus which, even more than the Archäologisches Museum, succeeded in achieving a symbiosis of old and new – this lavishly illustrated tome does essentially offer a comprehensive and fascinating insight into post-Modernism as a phenomenon of cultural history. Moreover, it surprises us with examples of largely unknown architecture illustrating the entire range of important building projects in the 1980s. Doubtless what is now the fourth volume in the series of Frankfurt architecture guides will contribute to establishing a new perception of this much-scorned decade and persuading many critics of post-Modernism that the architecture in question is of high quality. 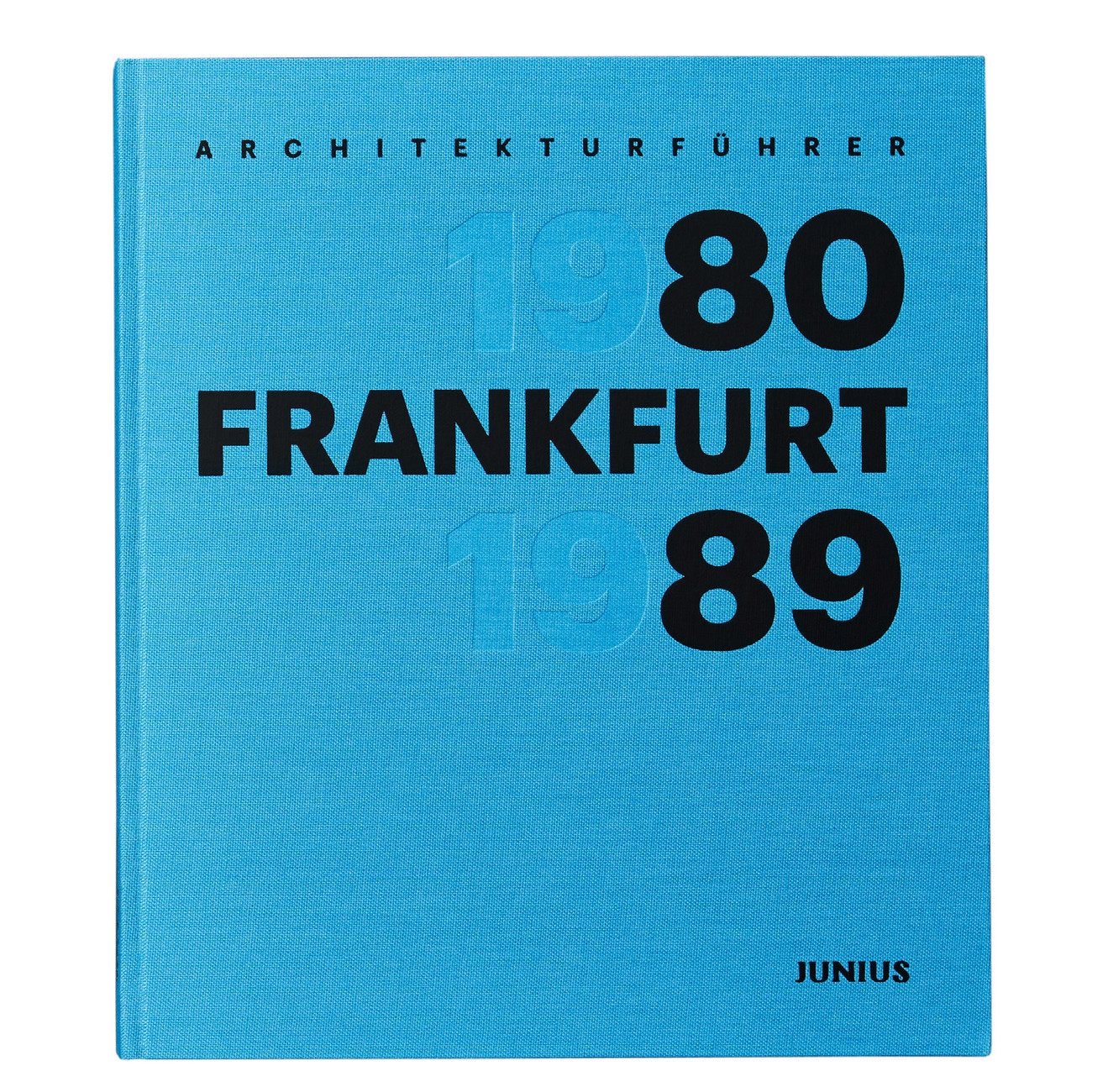 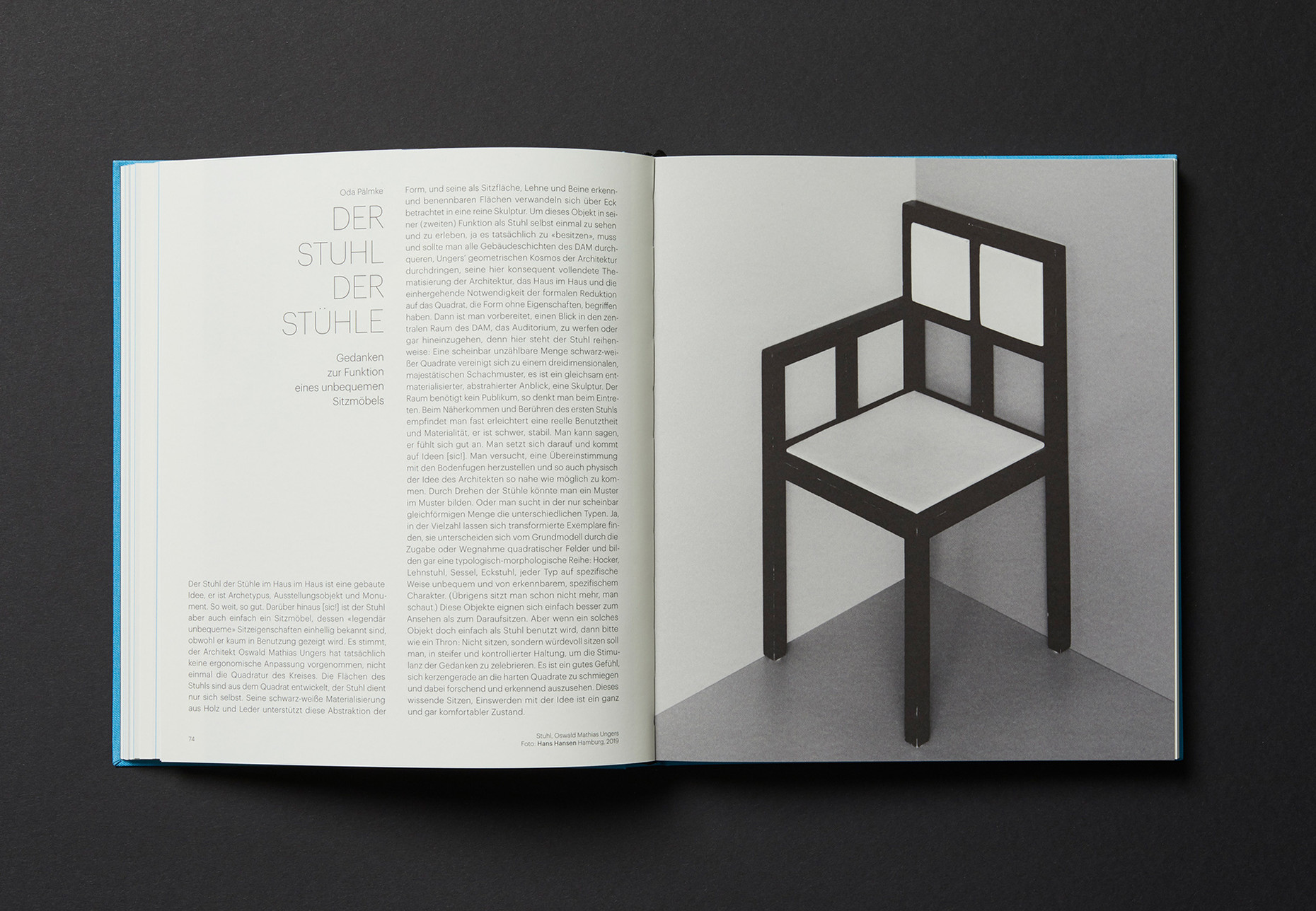 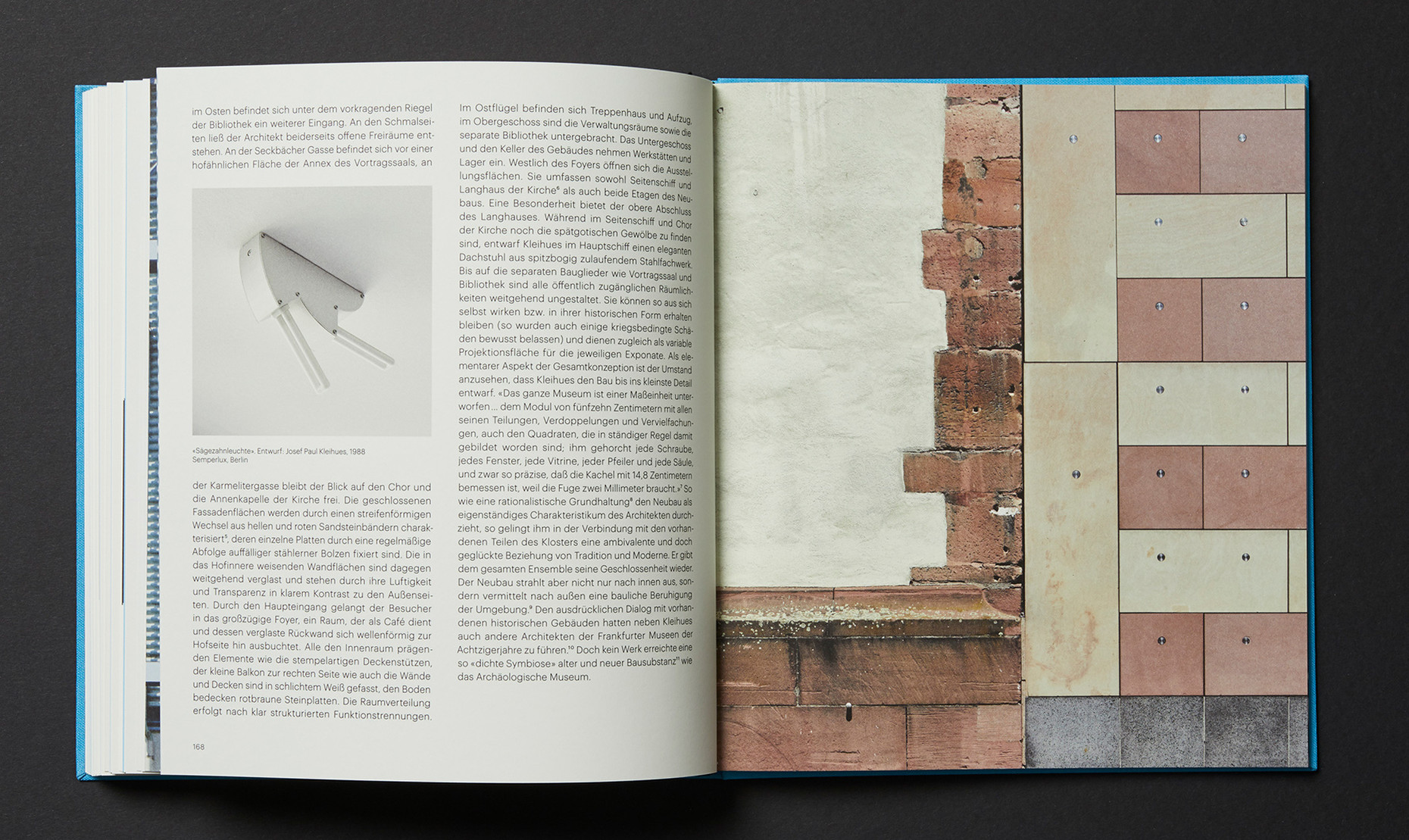 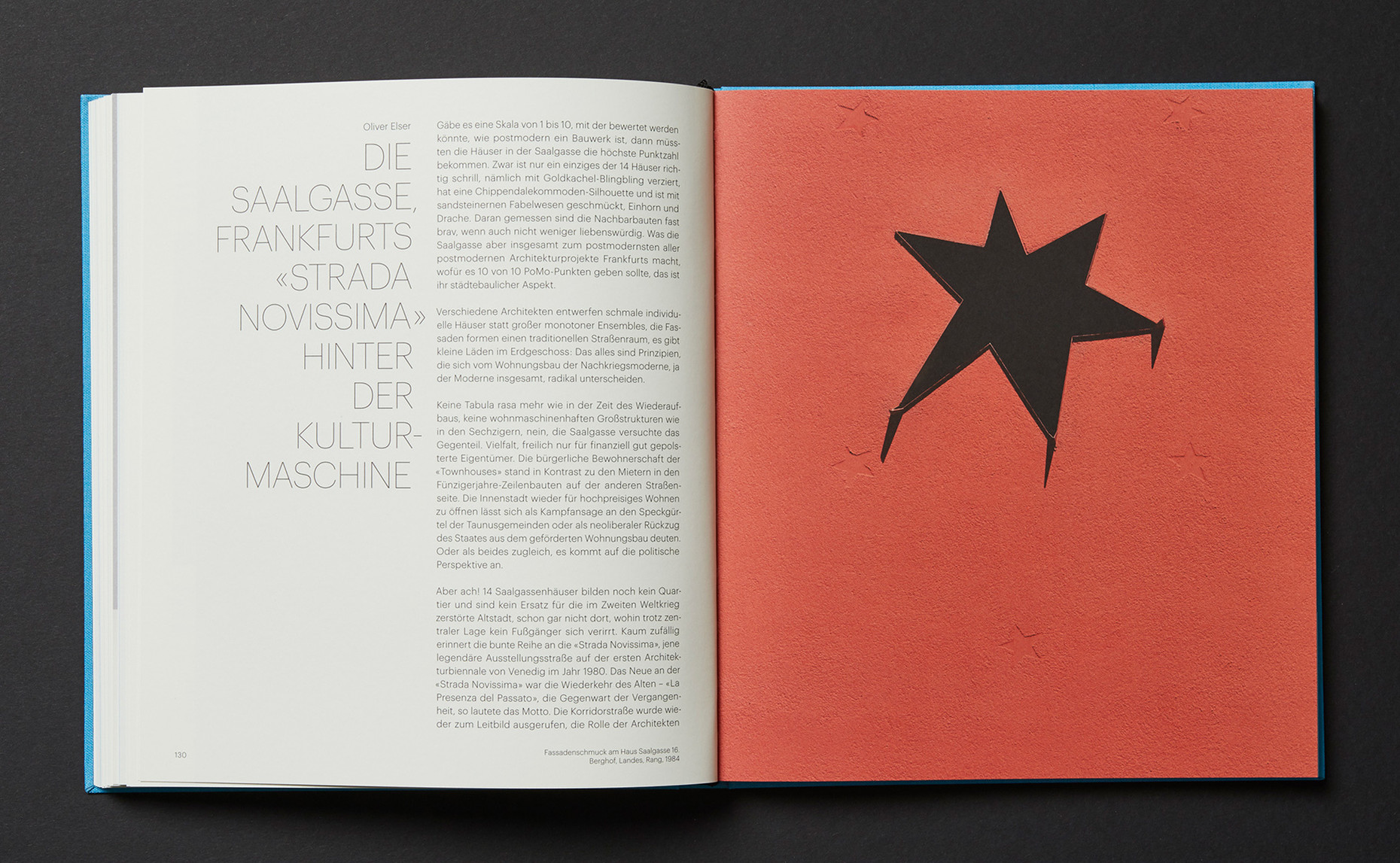 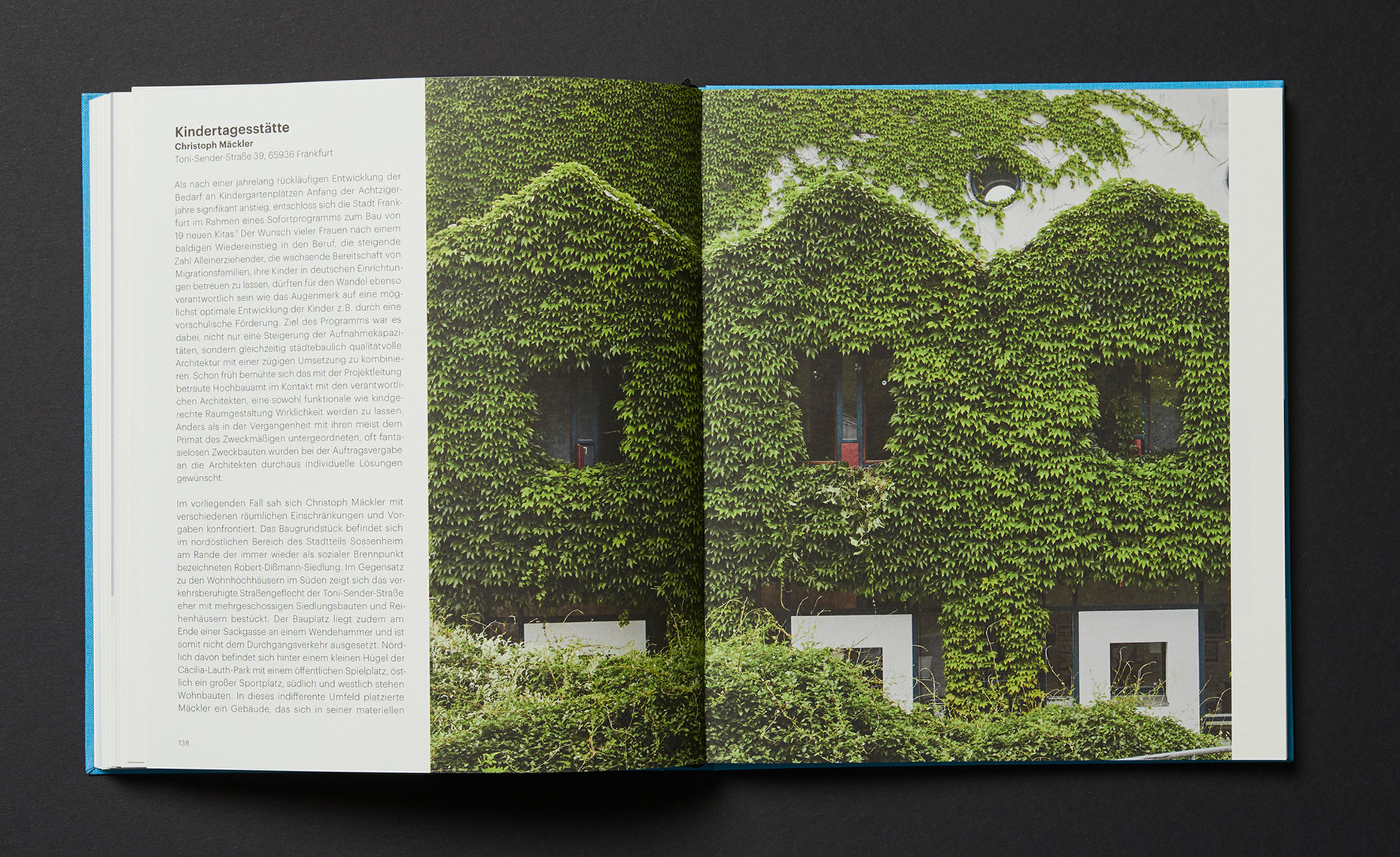 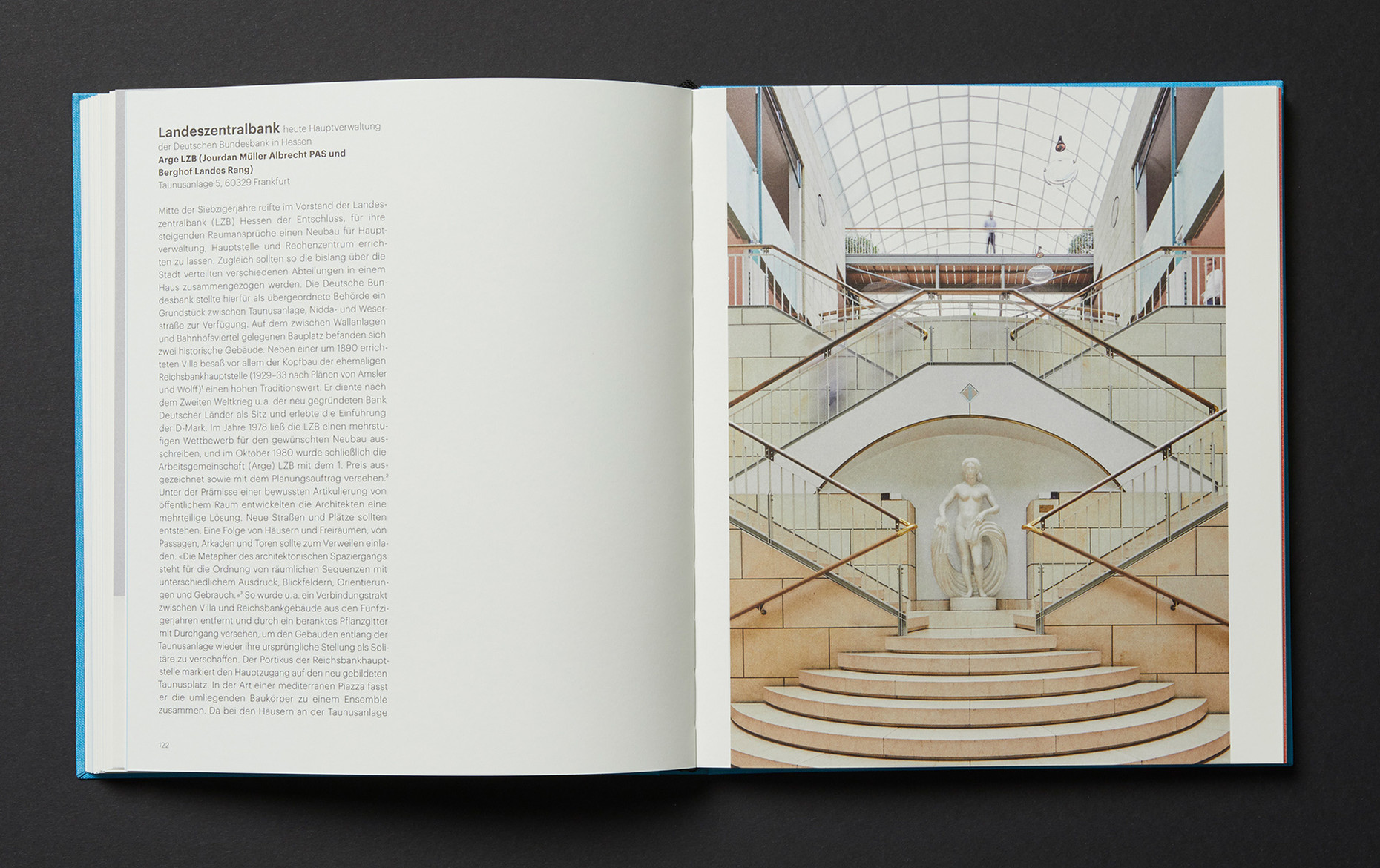 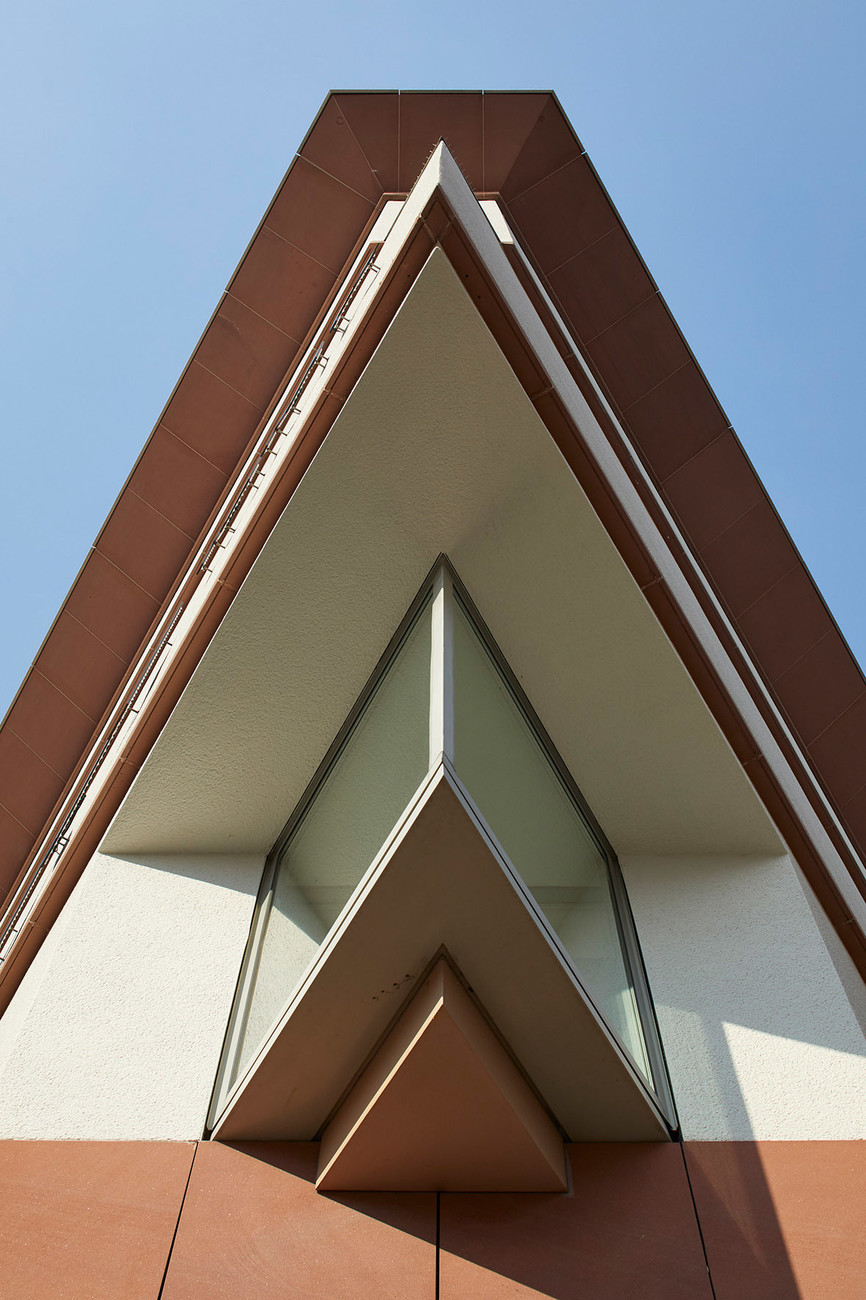 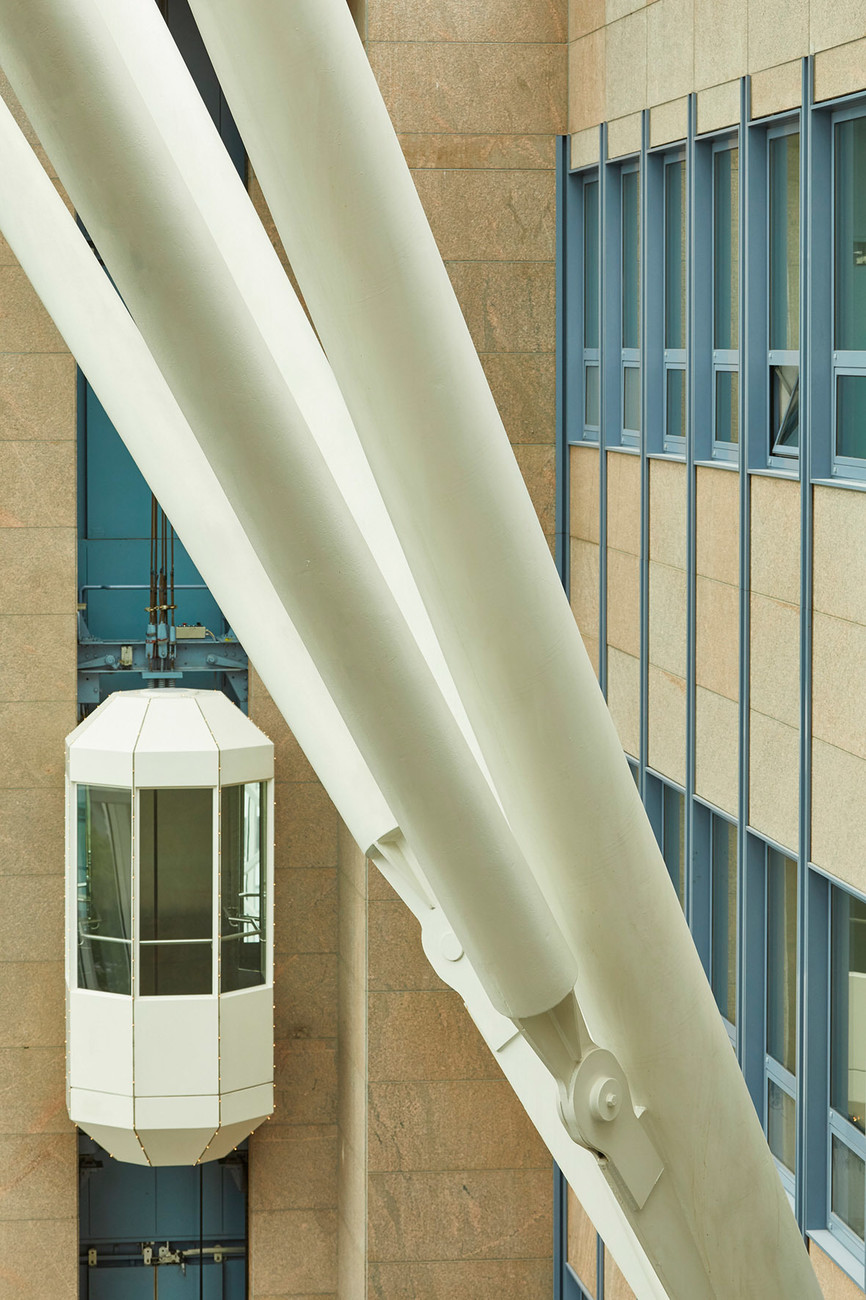 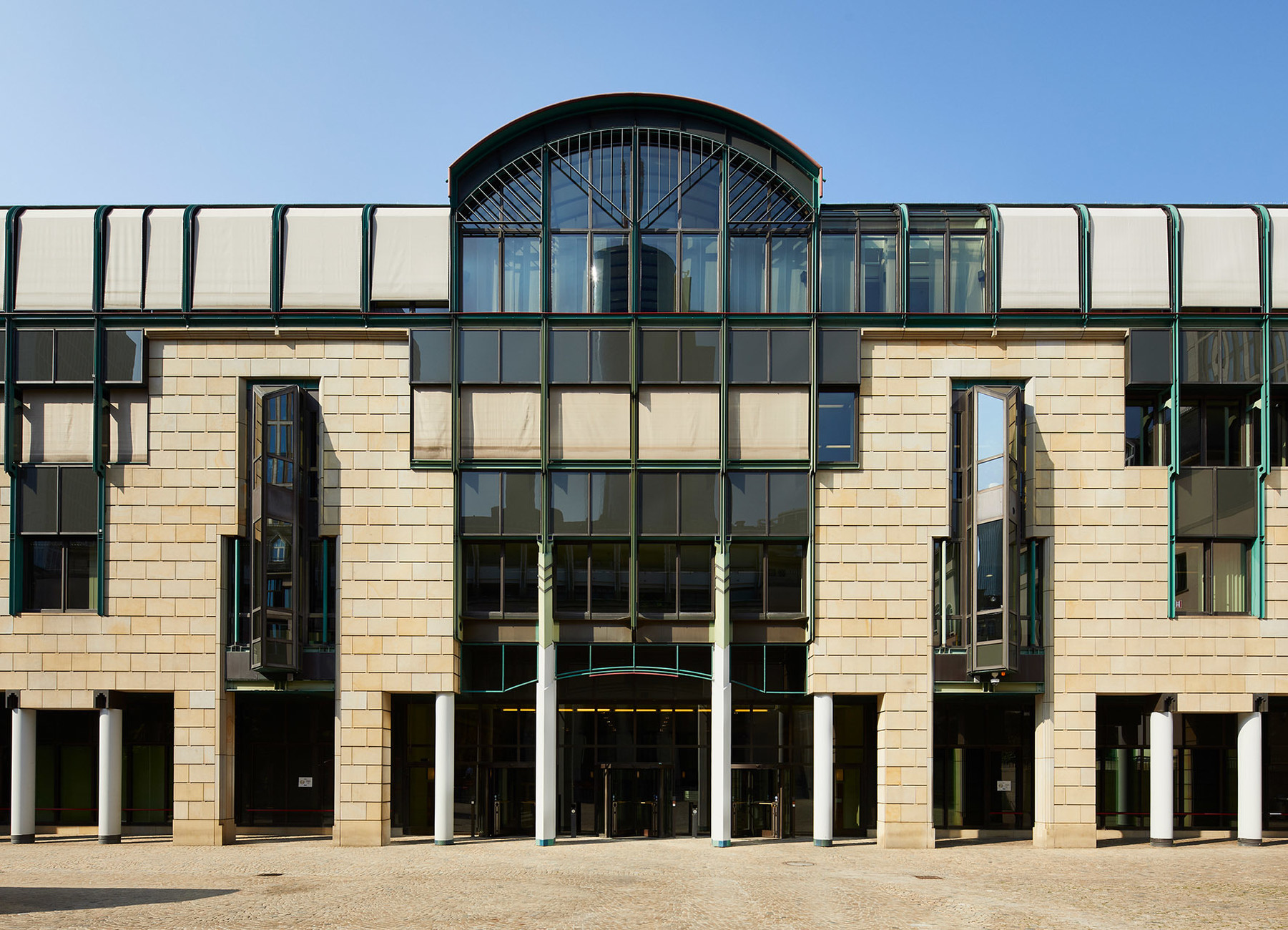 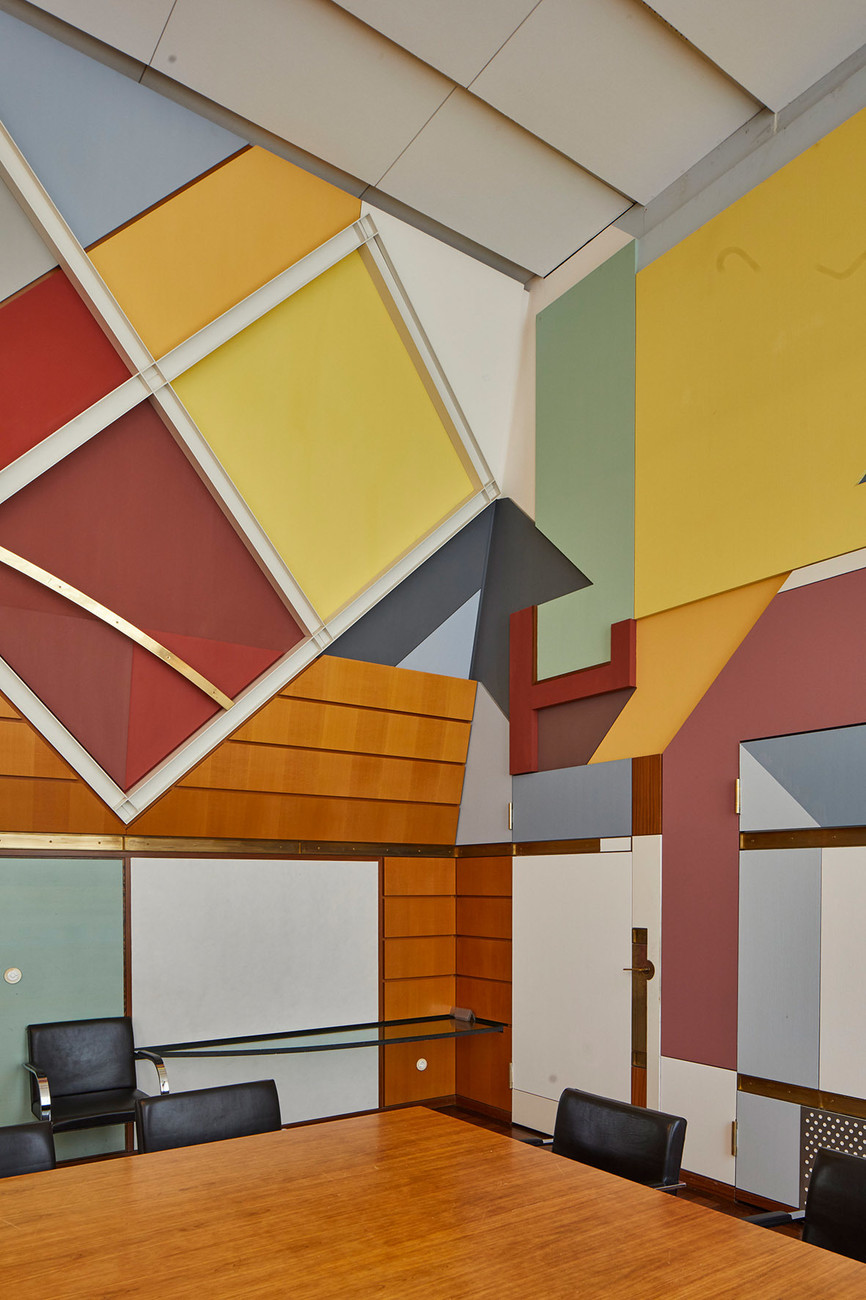 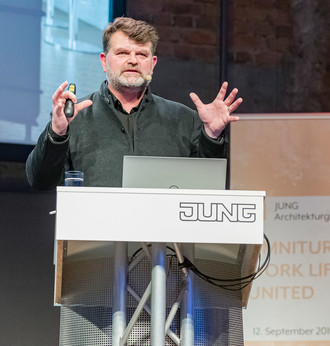 It has been finished for a few weeks: the spectacular Omniturm in Frankfurt/Main. It was designed by BIG, arguably the most successful architect’s office in the world at the moment. We met up with BIG partner Kai-Uwe Bergmann for an interview. 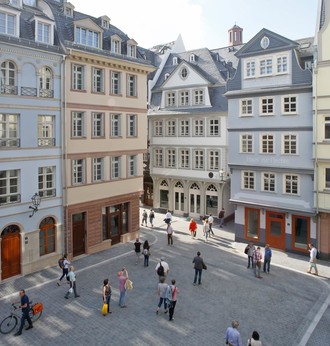 In recent years there has hardly been an urban planning project in Frankfurt/Main that has triggered a similarly emotional debate as the partial reconstruction of the historic Old Town, which was destroyed in the war. A commentary on its completion.