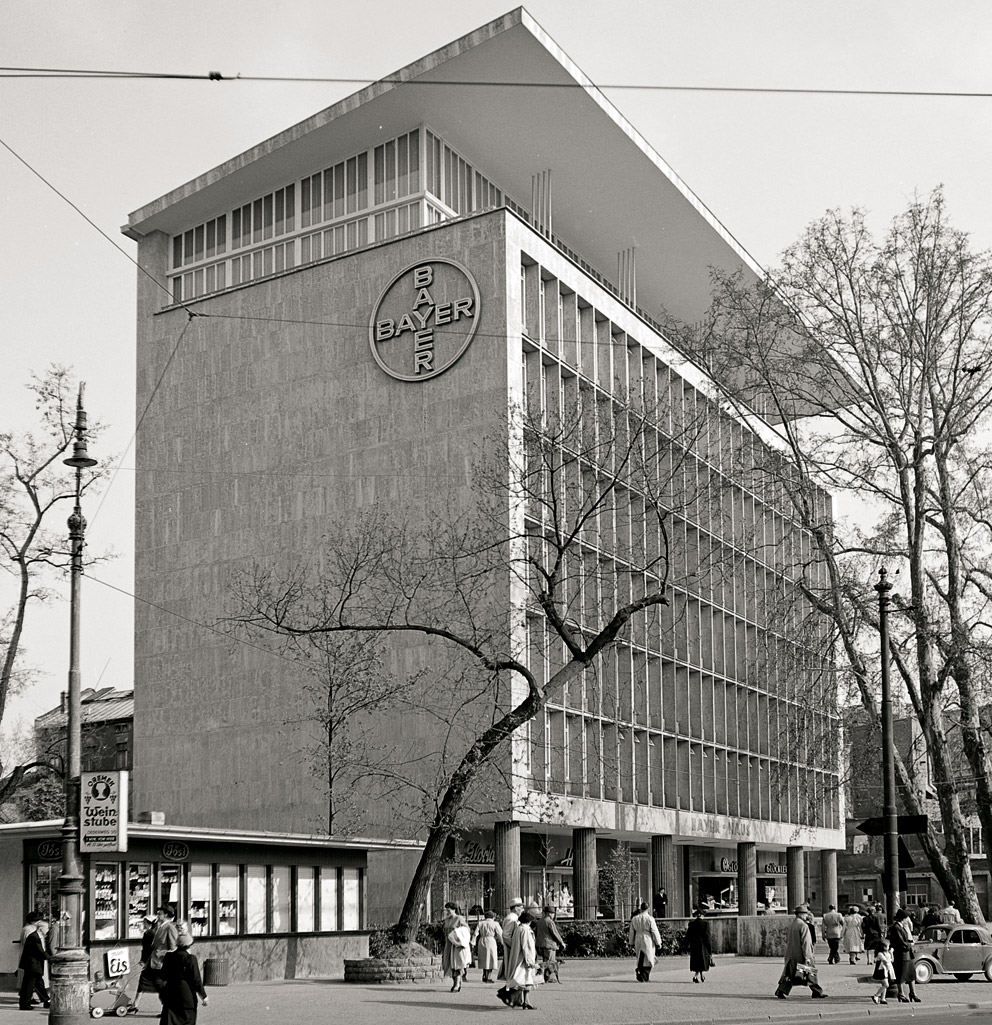 Built for the chemical company Bayer, this steel-framed administration building on the Anlagenring near Eschen¬heimer Turm has a shell limestone façade made up of regular structural grids. Its modern elegance is reminiscent of Erich Mendelsohn’s Columbushaus in Berlin (1930–1932). Shops are located on the ground floor behind the arcades and the office floors above have been occupied by a Fleming’s hotel since 2008. Beneath a cantilevered mono-pitch roof, a bar and restaurant with an outdoor terrace offer a view of the Landwirtschaftliche Renten¬bank – yet another monument to the era of the Economic Miracle. (Philipp Sturm) 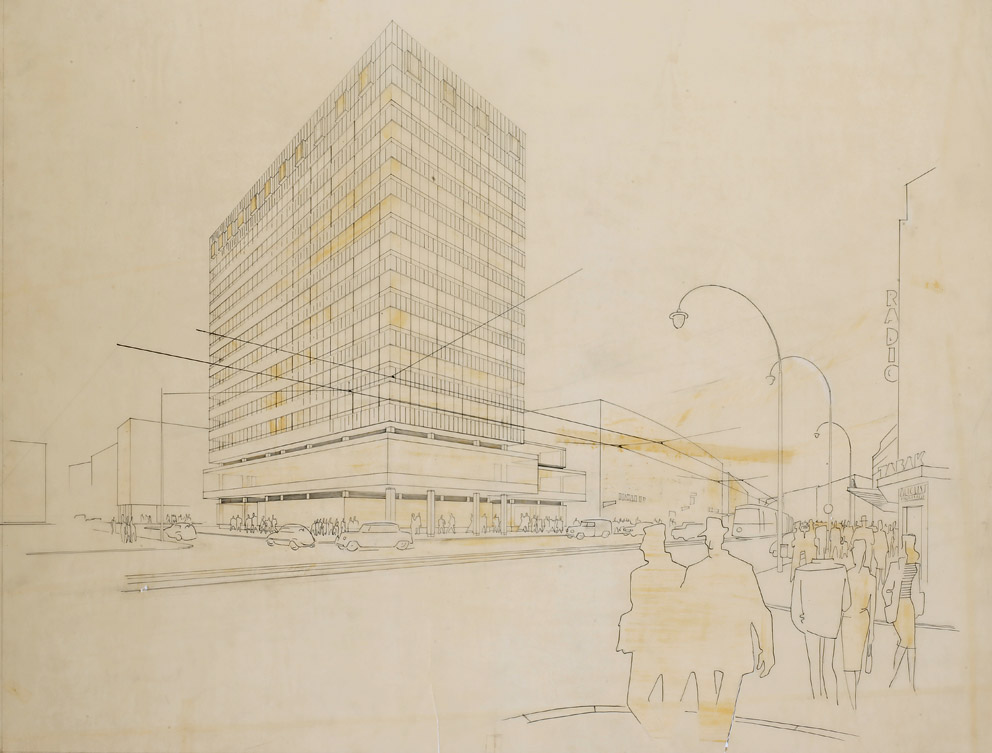 The Bienenkorbhaus, whose name refers to the former emblem of Frankfurter Sparkasse von 1822, a beehive, stands as the urban architectural gateway to the Zeil at Konstablerwache. Inspired in part by the Lever House in New York designed by Skidmore, Owings and Merrill (1951/52), Johannes Krahn erected an office tower that appears to float elegantly above a narrower base. Prominent features of the modern curtain wall include horizontal ribbon glazing and bands of shell limestone. The attic storey, with projecting punch windows, contains flats. KSP Engel und Zimmermann restored the original character of the building, which had suffered from the effects of preceding restorations, in 2009, and erected a second building alongside it which extends beneath the Bienenkorbhaus as a base storey. (Philipp Sturm) 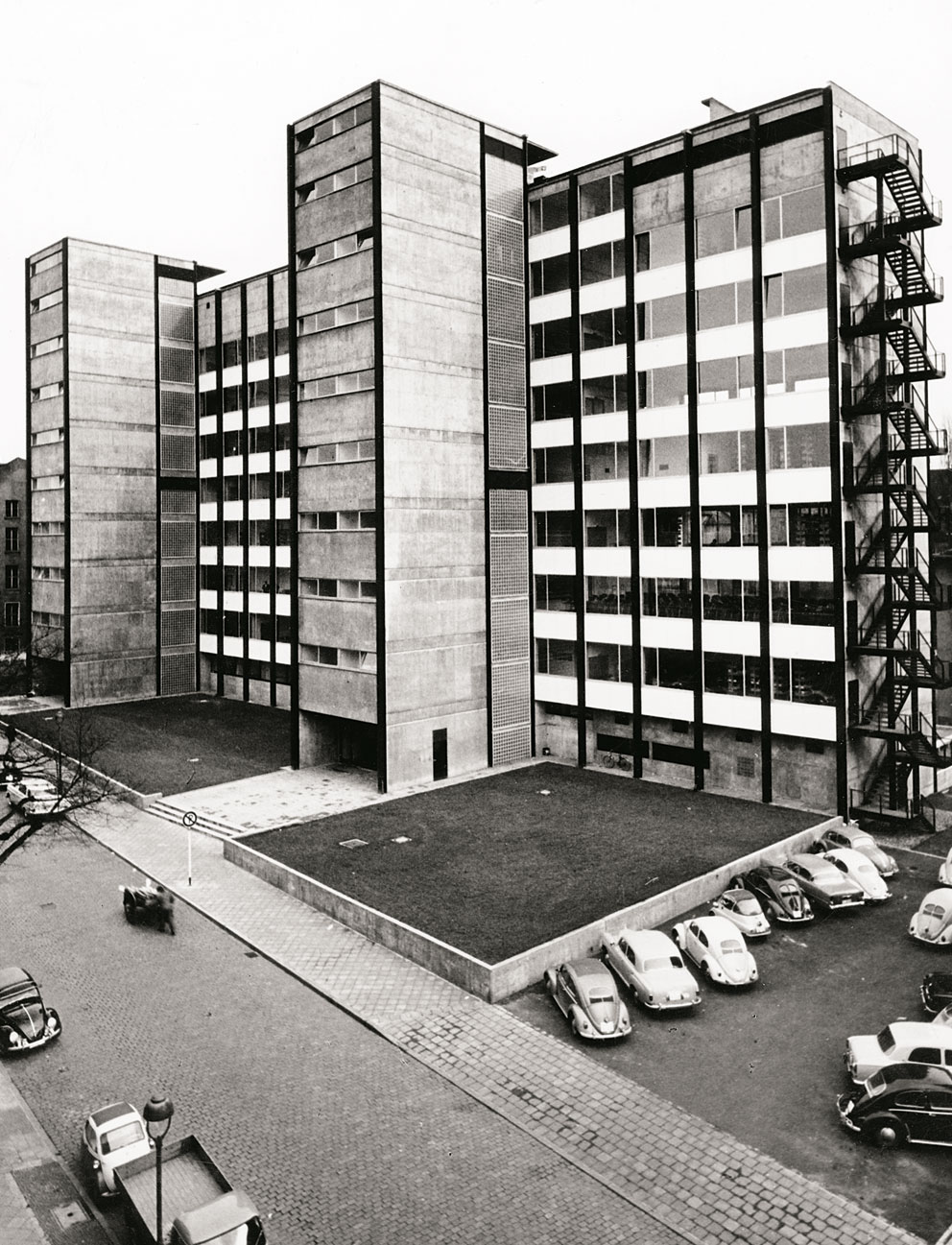 Architect Ferdinand Kramer housed the philosophy faculty of the Goethe University using a hitherto untried construction method which shifted the steel skeleton on to the outside of the building and dispensed with the standard concrete cladding. This created a flexible floor plan which could meet changing demands on the building. The adaptability of the internal space was further enhanced by the projecting towers which contain stairwells, lifts and toilets. The striking fire escape stairs were clearly inspired by modern Chicago residential blocks. This listed building will be converted for residential use. (Moritz Röger)