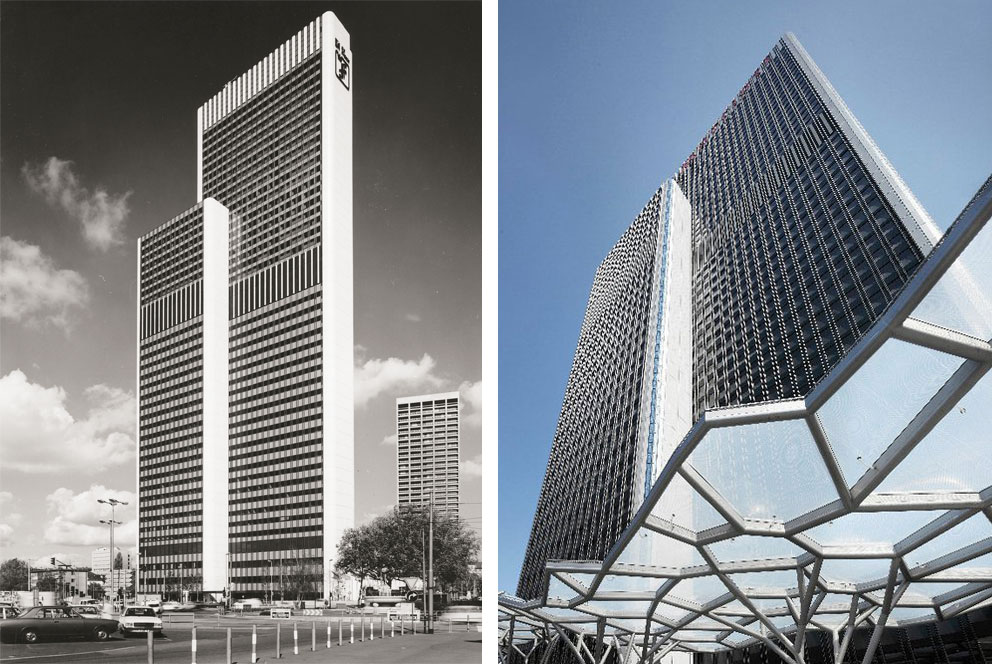 The three offset slabs that make up the Westend Gate are perhaps better known as The Marriott, after the hotel chain which has leased the upper storeys since 1989. The dark curtain walls of this hotel and office high-rise is delineated by a grid of windows and spandrel panels. Light-coloured surfaces on the building’s narrow sides add to its impact. An earlier 1964 design by Egon Eiermann for the same site envisaged two freestanding angled towers, whose shared emergency stairwell would have been accessible via glazed bridges.
(Myriam Pflugmann) 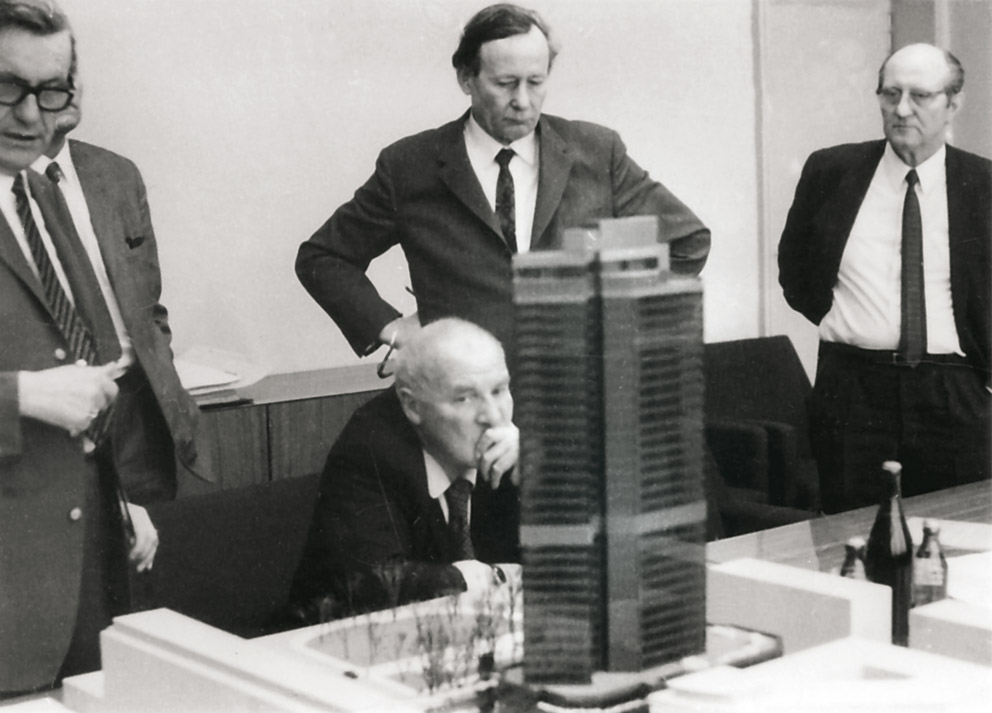 When the available office space in the headquarters of Bank für Gemeinwirtschaft (BfG) on Mainzer Landstraße was no longer sufficient for the bank’s demands, planning for a new building began with a trip to New York and Chicago in 1969. BfG, a bank with strong links to trade unions, wanted an aesthetically appealing building in a style between Modernism and Postmodernism that would measure up to the high-rises built by the major commercial banks. Perched above three base storeys, which until 1994 housed a shopping centre with direct access to the U-Bahn, is a prism-shaped office tower with a complex ground plan. The graceful structure gives an impression of soaring verticality, thanks not least to its façade design, apparently conceived with the help of the then Head of Planning Hanns Adrian. The building was thoroughly revitalised in 1994. The public areas were deconstructed and a relatively small public pavilion facing the park was erected. The tower has been closely connected to the euro ever since. Following the European Monetary Institute and the ECB, the European Banking Authority is now about to move into the building.
(Philipp Sturm) 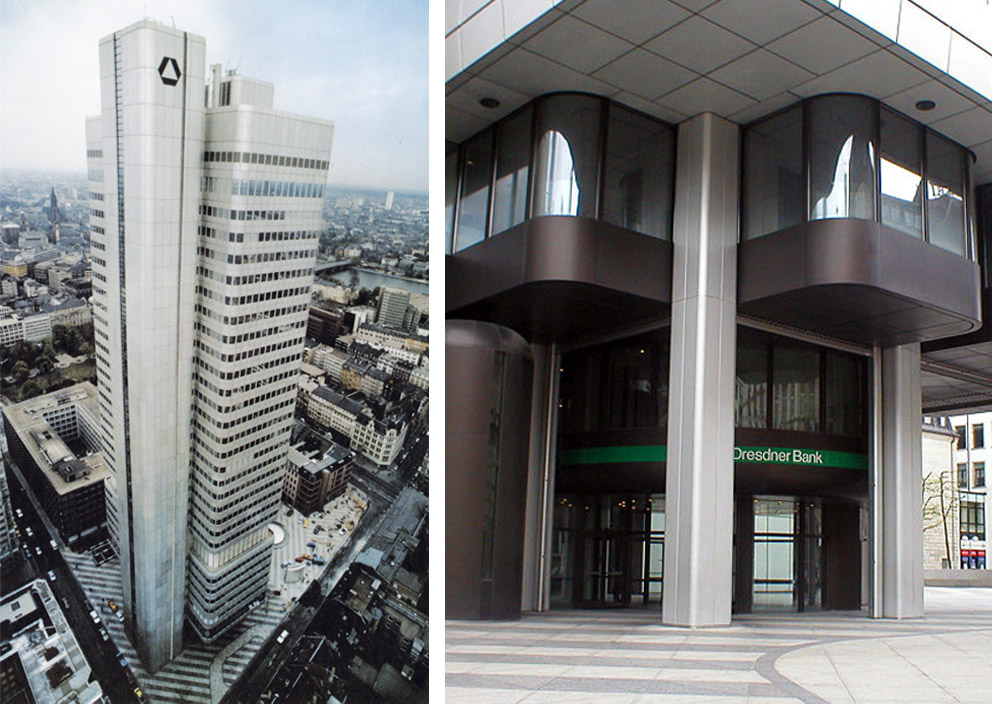 When the buildings that Dresdner Bank had been using, the Zinßerturm and the administration building at Gallusanlage 8, no longer provided sufficient space, the bank made plans for a new 32-storey building. The city parliament approved only 25 storeys in the Bahnhofsviertel, a central district which was developed during the Gründerzeit, in the late nineteenth century. Realising that the unfinished building shell looked overly squat, the city subsequently approved the original plans. Referred to today as the Silberturm because of the matt sheen of its silver aluminium façade, the structure consists of two square buildings, offset from each other and arranged point-symmetrically, that are connected to two utility towers. The rounded corners, the light colour of the cladding, the punch windows and the reflective sunshades give the tower a futuristic look. A group of fountains by sculptor Heinz Mack marks the boundary between Weserstraße and the plaza named after the former chairman of Dresdner Bank’s board, Jürgen Ponto. The original interior also reflected the planners’ forwardlooking design concept, which was based on Dresdner Bank’s own corporate design developed by ABB in collaboration with Otl Aicher. Based in part on recent insights in occupational psychology, an open-plan office with a flexible furniture system was developed to allow an individual design of each work station. Calming shades of green reminiscent of the corporate colour of Dresdner Bank, light, sand-coloured furnishings as well as a swimming pool and an auditorium on the 31st floor were meant to create a humane working environment. The office tower, which is currently occupied by Deutsche Bahn, was refurbished between 2009 and 2011 in order to meet current energy standards.
(Evelyn Steiner) 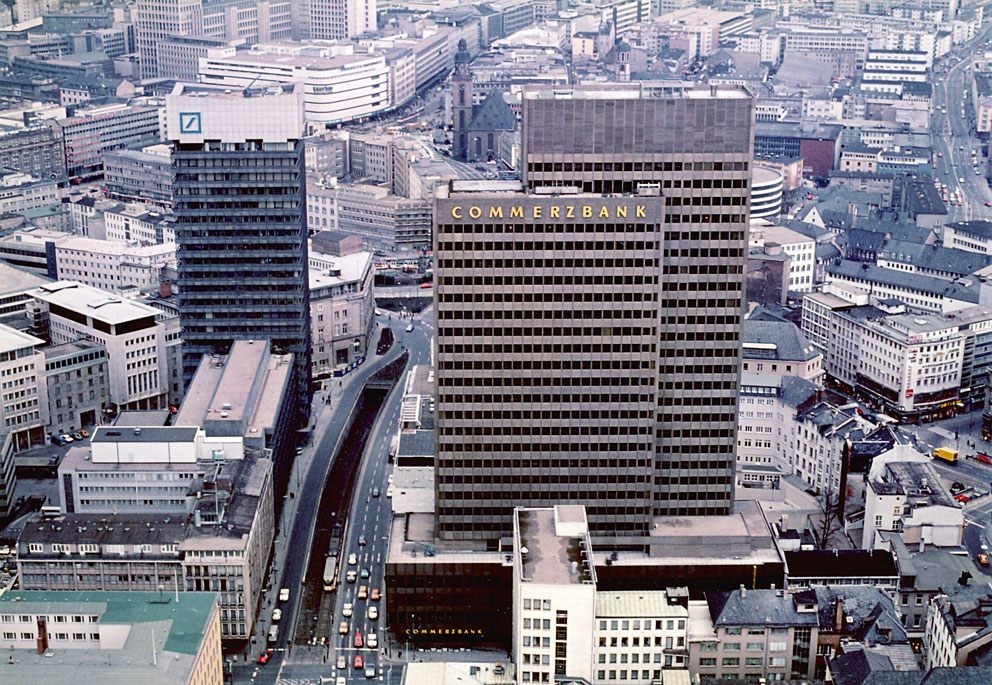 The headquarters of the Commerzbank (Mitteldeutsche Creditbank until 1929) were originally located in a neoclassical building (1905) by Eugen Rückgauer on Neue Mainzer Straße. In the early 1950s, Otto Bieger had his curtain and wallpaper store, known as the Bieger-Haus, built at the corner of Neue Mainzer Straße and Große Gallusstraße. The Commerzbank built a seven-storey extension on the neighbouring plot in 1960. Only six years later, the board of directors of the Commerzbank wanted to accommodate their entire staff in a single building. Seven architectural practices were invited to take part in the competition: Walter Maria Schultz, ABB Architekten & Partner Scheid, Max Meid & Helmut Romeick and Richard Heil, all from Frankfurt, HPP and Heinrich Rosskotten & Edgar Tritthart from Düsseldorf and the renowned international architect Ludwig Mies van der Rohe. The objective was to design a building modelled on Mies’s Seagram Building (1958) in New York that would meet the standards of ‘distinguished unobtrusive architecture’ with easy communication within the building, and ensure the best possible use of the site. All the submitted designs were for a tower, either as a freestanding structure or connected to a lower base. Only Mies van der Rohe, who rarely participated in competitions and had by then largely withdrawn from professional activity proposed a complex divided into two separate buildings: a 127-metre-tall office tower on Neue Mainzer Landstraße and a single-storey pavilion on Große Gallusstraße. The actual design work, however, was done by his assistant and grandson Dirk Lohan. Like the Chicago Federal Center (1964–1974) and the Toronto Dominion Center (1967/1969), the buildings were to be connected by an underground passage. Now virtually unknown, and one of his last designs – Mies died in 1969 – the model comprised an assembly of elements with which he had been concerned throughout his lifetime and for which he had developed a universal solution: a steel frame translated into grid-pattern façades, an elevated tower mounted on pilotis above a glass-walled ground floor and a pavilion with visual links to its surroundings. The plaza that Mies envisaged in front of the tower would have opened the present ‘banking canyon’ with a view to the pavilion. And it would have been his only high-rise building in Germany. The board of directors was not satisfied with the proposed design, however, and decided in favour of Richard Heil, not least of all because he ‘was able to offer the best use of the limited space due to his good contacts with the city council. Planning began in December 1968, construction in June 1970. Above the base building, which was aligned with the eave height of the neighbouring Gründerzeitbuildings, Heil erected two slabs joined by a central core and offset against each other and integrated the building completed by Schultz in 1960 into the overall complex. The interior design for the open-plan offices was developed by Olaf Leu. Like that of the Seagram Building, the façade was clad with anodised, bronze-coloured aluminium. Thus Mies van der Rohe’s influence was visible even though he had not directly participated.
(Teresa Fankhänel)