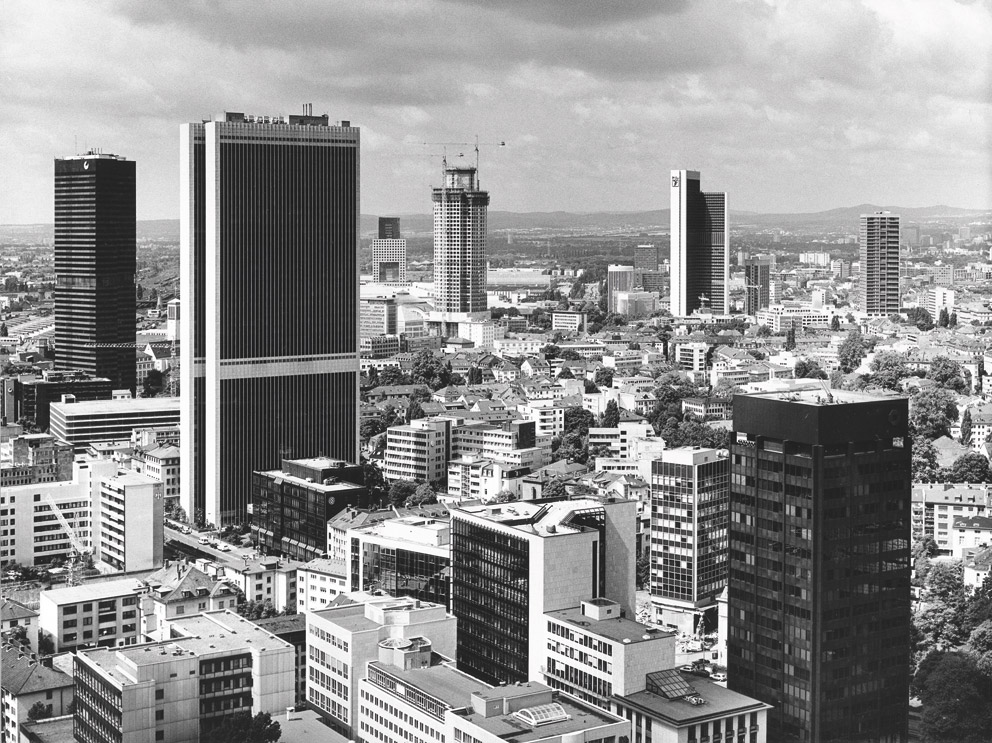 The FBC is a fine example of post-war modernist highrise architecture. Richard Heil’s unpretentious steelframed building with its glass-and-steel façade emphasises vertical lines. Only the windowless 15th-storey utility floor subdivides the glass front with a horizontal band of granite. Thanks to its slender shape, the whole tower benefits from natural light. The FBC was a focus of dispute both within the city council and in public even during the planning phase. Construction was suspended in 1975, and the 140-metre-tall shell erected for clients Simon Preisler and Isidor Herskovits rose to the sky as Frankfurt’s largest ghost tower. Four years later the building was put up for compulsory auction and acquired by ECE Projektmanagement who opened offices there in 1981. Added in 2012, an open plaza covered by an illuminated canopy integrates the FBC more harmoniously into its surroundings.
(Bernhard Unterholzner) 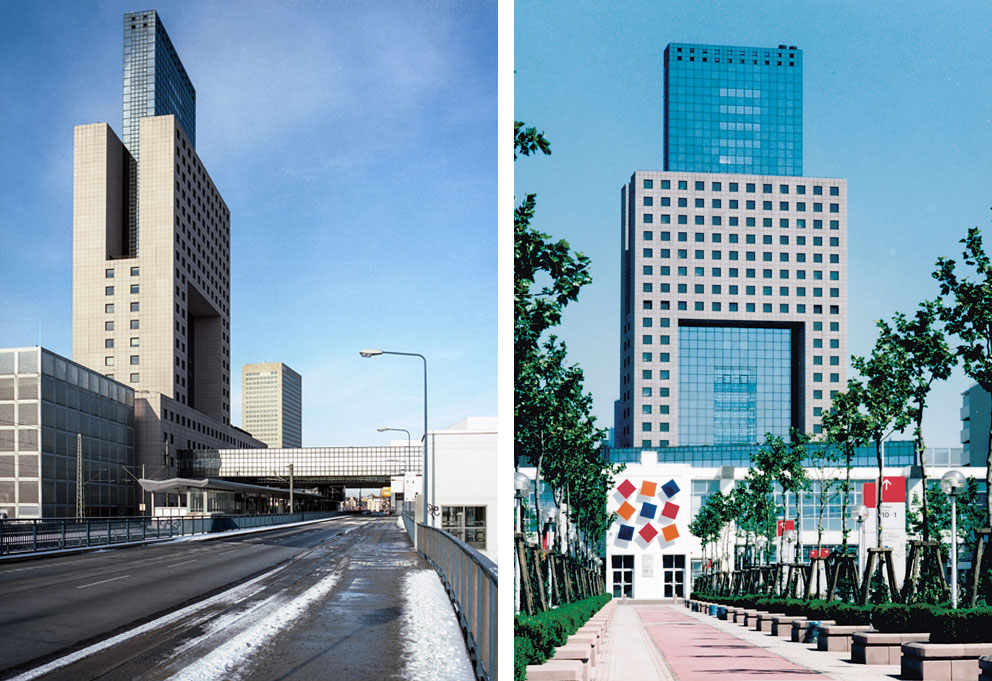 The Messe Torhaus lies in the centre of Frankfurt’s trade fair grounds on a triangular site bordering the railway line. The red sandstone tower with glass cladding is connected to the rest of the fair by two glazed walkways running through its base where the trade fair’s central services are located. The glass core of the building rises out of the base, framed by a stone façade with square windows. Behind these are offices, whereas the glass tower accommodates conference rooms. The opening in the stone façade leaves the core exposed over several storeys, creating the characteristic gateway form. Ungers produced an initial design for his ‘gateway to the world’ in 1982 at the architects’ conference in Charlottes-ville (USA). Colleagues including Peter Eisenman and Kevin Roche were highly critical of his design, which they felt above all lacked a sense of proportion. Jaquelin Robertson and Michael Graves perceived the building as a guillotine rather than a gateway, and Leon Krier labelled it ‘hard kitsch’. In the end, a variant of the initial design, with a closed façade, was built – which now acts as a ‘window on the city’ and serves as a chimney for the nearby combined heat and power station.
(Franziska Stein) 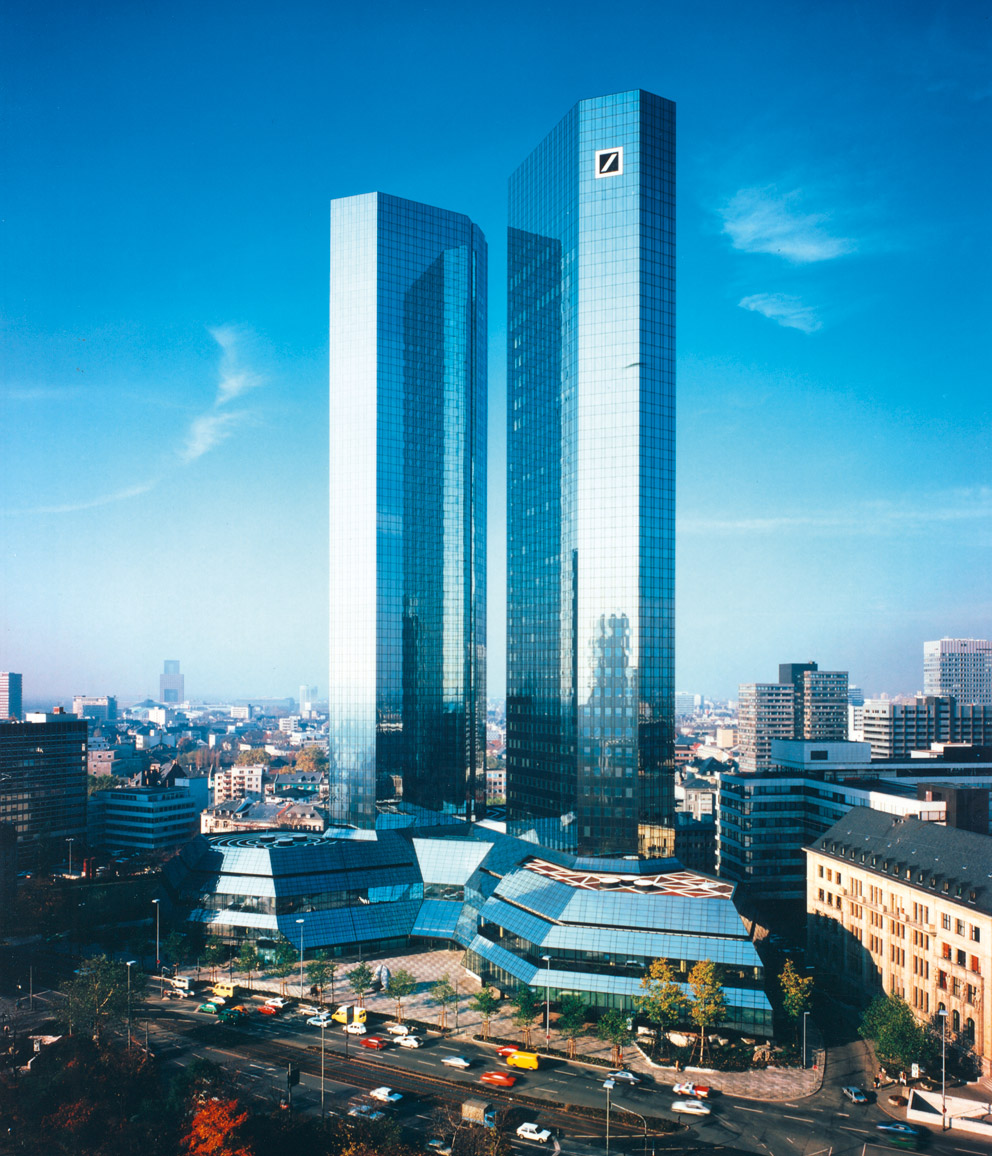 In 1971, investors Josef Buchmann, Bolek Israelewicz, Isidor Herskovits and Simon Preisler held a design competition for the site of the Löwenstein’sches Palais (1891/92) built by Ludwig Neher and Aage von Kauffmann, which had been partially destroyed during the war. The architecture firm Giefer and Mäckler won the competition with a twin tower design. Because of the recession in the 1970s, the original investors abandoned the project, and it was taken over by the Munich Schörghuber Group. The new investors commissioned ABB Architekten to design a high-rise consisting of two towers. Although the towers were taller and given a different shape than those in the 1971 design, the basic concept – two high-rise buildings rising from a broad five-storey podium – was retained. It was not until the winter of 1978/79, after the foundations had already been laid, that Deutsche Bank acquired the project and commissioned ABB Architekten to complete the building to use as headquarters. Two prism-shaped towers in masonry construction, positioned in axial symmetry, rise above the base structure, which covers the site almost entirely. Together with the central cores, the exterior concrete wall with punch windows and a silver-blue mirror
glass curtain wall bears the weight of the building and, by virtue of its mass, reduces energy consumption. The two soaring glass prisms are a landmark between the historical banking quarter and the rapidly developing Mainzer Landstraße. A public passage through the podium – a requirement imposed by the city council – connects the Anlagenring and the Westend. Following extensive refurbishment of the towers, Max Bill’s sculpture Kontinuität (19831986), once prominently positioned outside the main entrance, was moved to a park between the Deutsche Bank and the Trianon in 2011.
(Philipp Sturm)