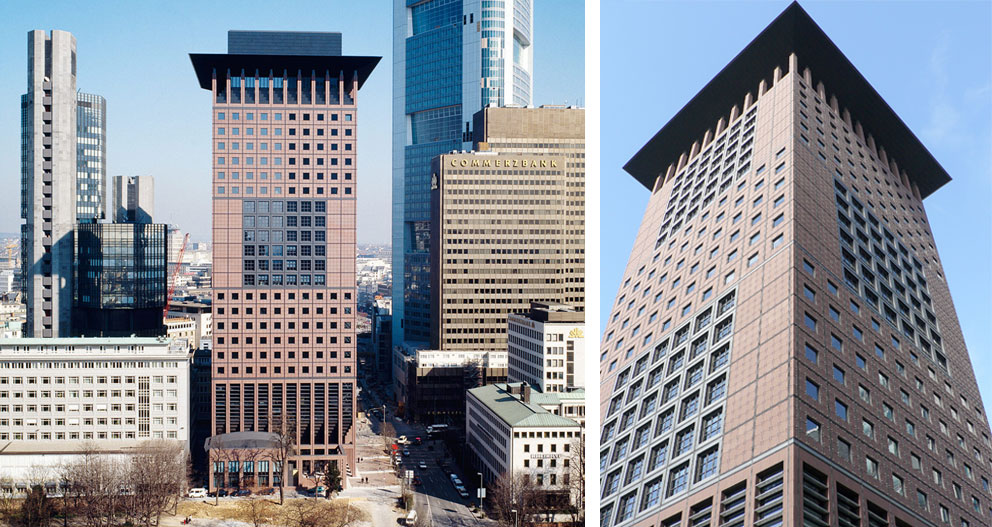 The design of this high-rise reflects the clients’ intention of renting the tower to Japanese companies. Originally the competition was open to Japanese architects only, but the city insisted that a firm based outside Japan be invited to take part in the selection process as well. In the end, a German practice won the anonymous competition with a design featuring a ‘Far-Eastern’ look. The shape of the building with its red granite façade calls to mind a traditional Japanese stone lantern, and the grid pattern of the tower façade is based on the proportions of Tatamimats. Office floors with floor-to-ceiling or punch windows rise above the ground floor which houses retail units. The building is topped by colonnade-style elements crowned by an overhanging monopitch roof. A restaurant offering panoramic views mark one of the first attempts in Frankfurt to open the top of a tower to the public.
(Evelyn Steiner) 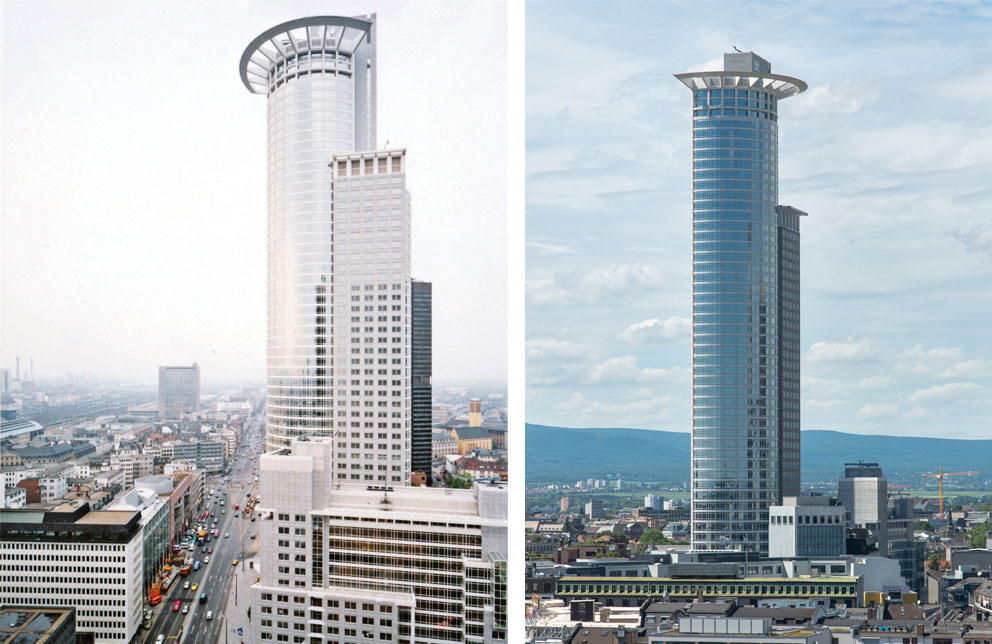 In 1985, Josef Paul Kleihues had submitted designs for two slim towers which were never built. The DG Bank skyscraper that eventually did get constructed, with its simple, interlacing geometric shapes and a combination of different materials, is a typical example of postmodern architecture: an angular, granite-clad tower merges with a semi-circular glass-and-steel structure. The tower references the construction history of its surroundings in the vertical succession of its elements. Its base is aligned with the eave height of the neighbouring residential buildings, the 50 metres of the wing corresponds to the maximum height allowed by the binding land-use plan from the 1960s, and the granite tower, at 150 metres, marks the height of the second generation of high-rises in the 1970s. Emphasising the tower’s exclusive height, a prominent steel ring, which is heated to prevent the formation of icicles, was installed on top of the tower. Illuminated at night, this glittering crown provides an iconic image for the city. By contrast, the shopping arcade on the ground floor, given its entrance situation, hardly functions as a public space.
(Bernhard Unterholzner) 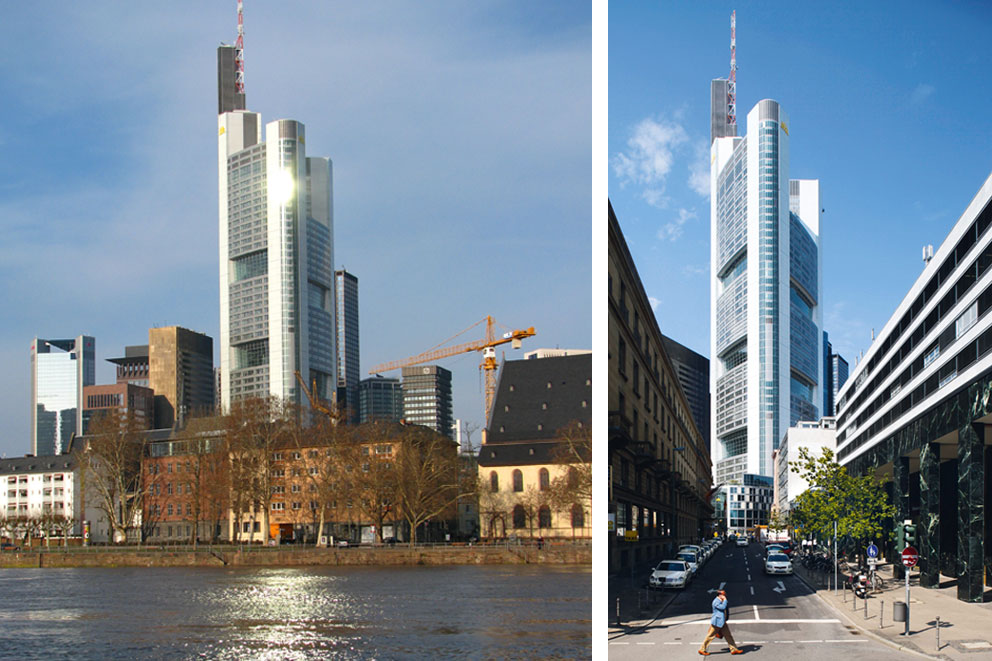 Four years after completion of the Commerzbank Tower on Neue Mainzer Straße, the bank began planning another high-rise at Kaiserplatz. The new structure was to rise above the Dresdner and Deutsche Bank buildings, but the Georg Hauck & Sohn Bank considered the plans a violation of neighbourhood rights and took legal action. Based on the City Leitplan (1983), Head of Planning Hans Küppers (CDU) recommended a new building at Güterplatz. That plan was given low priority, however. Following the presentation of the development framework plan for the banking quarter (1990) by the governing Red-Green coalition elected in 1989, the competition was announced in 1991. Although the framework plan originally limited building heights to 130 metres, the Commerzbank was granted special permission to build the tallest tower in Frankfurt. The confined space at the city-centre location and the geological characteristics of the site posed a particular challenge for the foundations. In order to prevent subsidence, the Hochtief construction company drilled piles into the ground to a depth of 50 metres. The lobby and public plaza were put on the first floor to reduce the need for underground construction work. This had the side effect of closing off the building from the surrounding urban space. The tower with its triangular ground plan is supported by corner pillars and a steel structural frame. An atrium fills the space ordinarily occupied by a concrete core, giving the entire building a lighter, airier look. Environmental protection and reduced energy consumption were fundamental planning aspects – a novelty in high-rise construction. At the heart of the concept is the use of natural ventilation wherever possible, thanks to sophisticated façade technology, the atrium and nine winter gardens, which are the building’s distinctive feature. These green areas, each of which encompasses four floors, rise in offset spirals towards the top of the tower. The flora of each garden reflects the direction it faces and its climatic zone – North America, Asia and the Mediterranean. The gardens serve as meeting places and are spaced in such a way that every three of them, spanning 12 storeys, form a „village“.
(Bernhard Unterholzner) 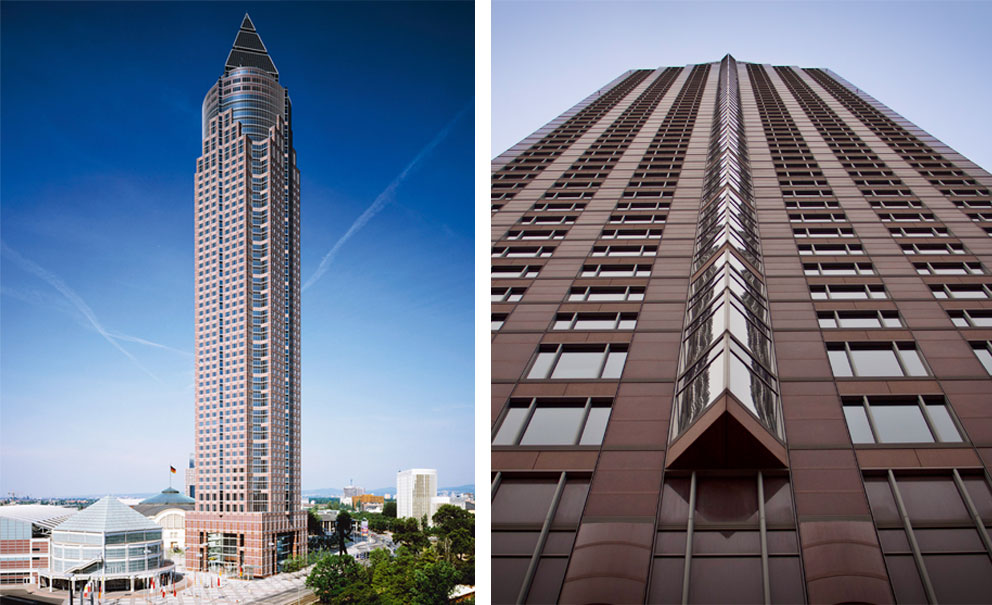 On the eastern part of the trade fair grounds, facing the city, plans were launched in 1983 for a tower and a new exhibition hall to be built next to the Festhalle. The management of Messe Frankfurt, the company running the Frankfurt trade fair, held a two-stage competition in 1984, inviting six practices to participate: Max Bächer and Helge Bofinger; Gottfried Böhm; Harald Deilmann; Kammerer und Belz with Kucher und Partner; Murphy/ Jahn; and Jourdan und Müller PAS. Despite the jury’s recommendation to adopt the design by Max Bächer and Helge Bofinger, which offered the best integration of the tower into its surroundings, Messe Frankfurt decided to commission the Chicago-based practice Murphy/Jahn. The original intention had been to build the tower in conjunction with Deutsche Bank, but the bank pulled out after the 1987 stock market crash. In its place, American investors Tishman Speyer and Citibank undertook to finance the project. The small footprint of the tower, at only 41 metres on each side, posed problems during the planning phase. The Frankfurt building regulations requiring that stairwells must be positioned on the outer edge of the building cast doubt on the economic viability of the whole project, since it would not have left enough floor space for offices with adequate natural light. The clients and architects eventually reached an agreement with the building supervisory and fire prevention authorities that the stairwells would be situated inside of the building but feature positive pressure ventilation systems (see essay by Michael Kummer), and building work began in July 1988. Since 1991, Helmut Jahn’s Messeturm has been the icon of the Frankfurt skyline; until 1997 it was Europe’s tallest building. The design of the postmodern tower harks back to the classic 1920s New York skyscraper typology. A red square granite shaft reveals at its tip a glass cylinder which can first be glimpsed through an opening in the base. At 218 metres, the tower is crowned with a 38-metre pyramid. In its materiality, the tower resembles the neighbouring Torhaus by Oswald Mathias Ungers: the granite façade of the base is anchored to the ground, while the glass structure stretches towards the sky. The Messeturm has only been connected to the underground network since 2001. It is a workplace for up to 4,000 people.
(Philipp Sturm)