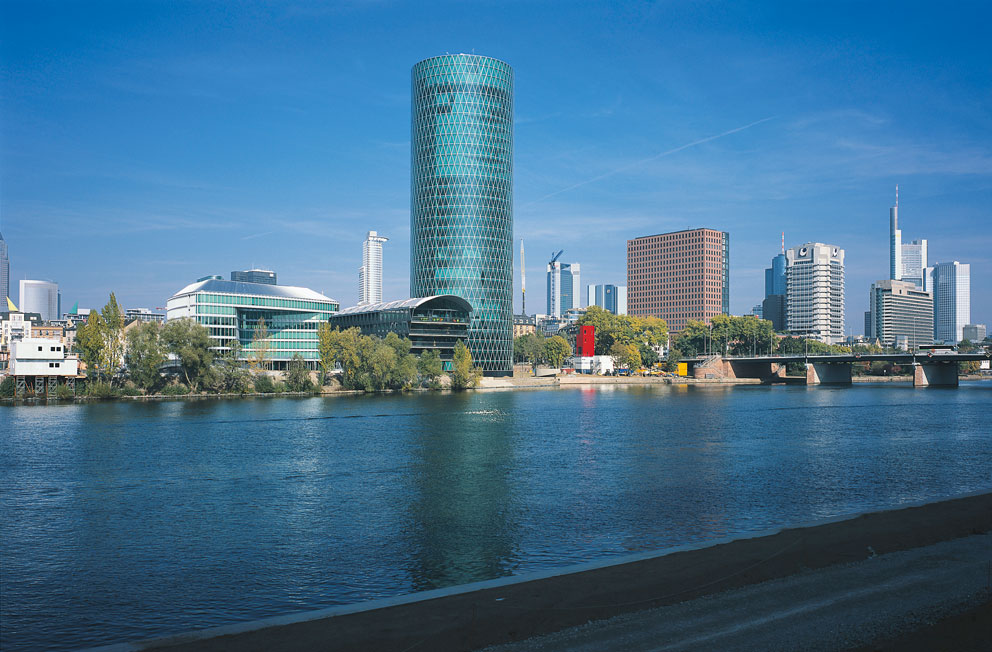 The Westhafen Tower, right on the River Main, joins with a bridge building to form a landmark for the residential and office district Westhafen, welcoming both road and rail travellers into the city. The office space within the green glass cylinder is designed on a square floor plan which widens along one side into a semicircle. In the spaces outside the square, there are four-storey winter gardens, whose position rotates by 90 degrees each floor. The winter gardens reduce energy consumption, and the triangular casements, which can be opened at the bottom, also help to regulate air temperature inside the tower. (Peter Körner) 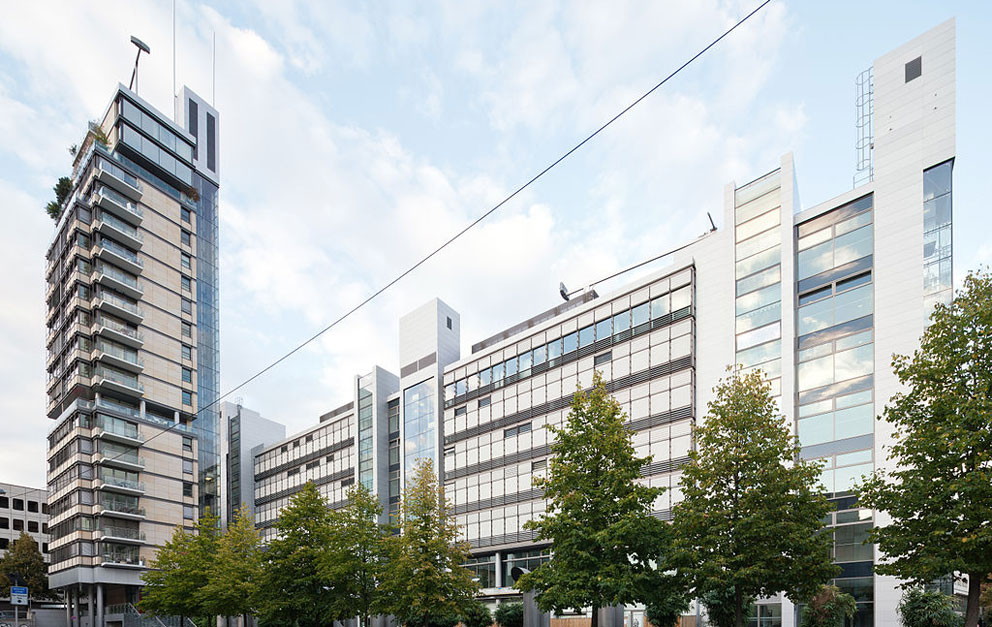 The Skylight complex on the site of the former post office bank comprises a residential high-rise, an E-shaped office building and four low-rise town houses. Committed to the concept of revitalising the city centre with residential high-rises, the tower provides luxury flats with concierge services. Other facilities include restaurants, shops and a fitness centre in the adjacent office block. The beige cast stone façade and the glass-enclosed lift in the asymmetrical tower represent high-tech architecture in the typical style of Richard Rogers. (Evelyn Steiner) 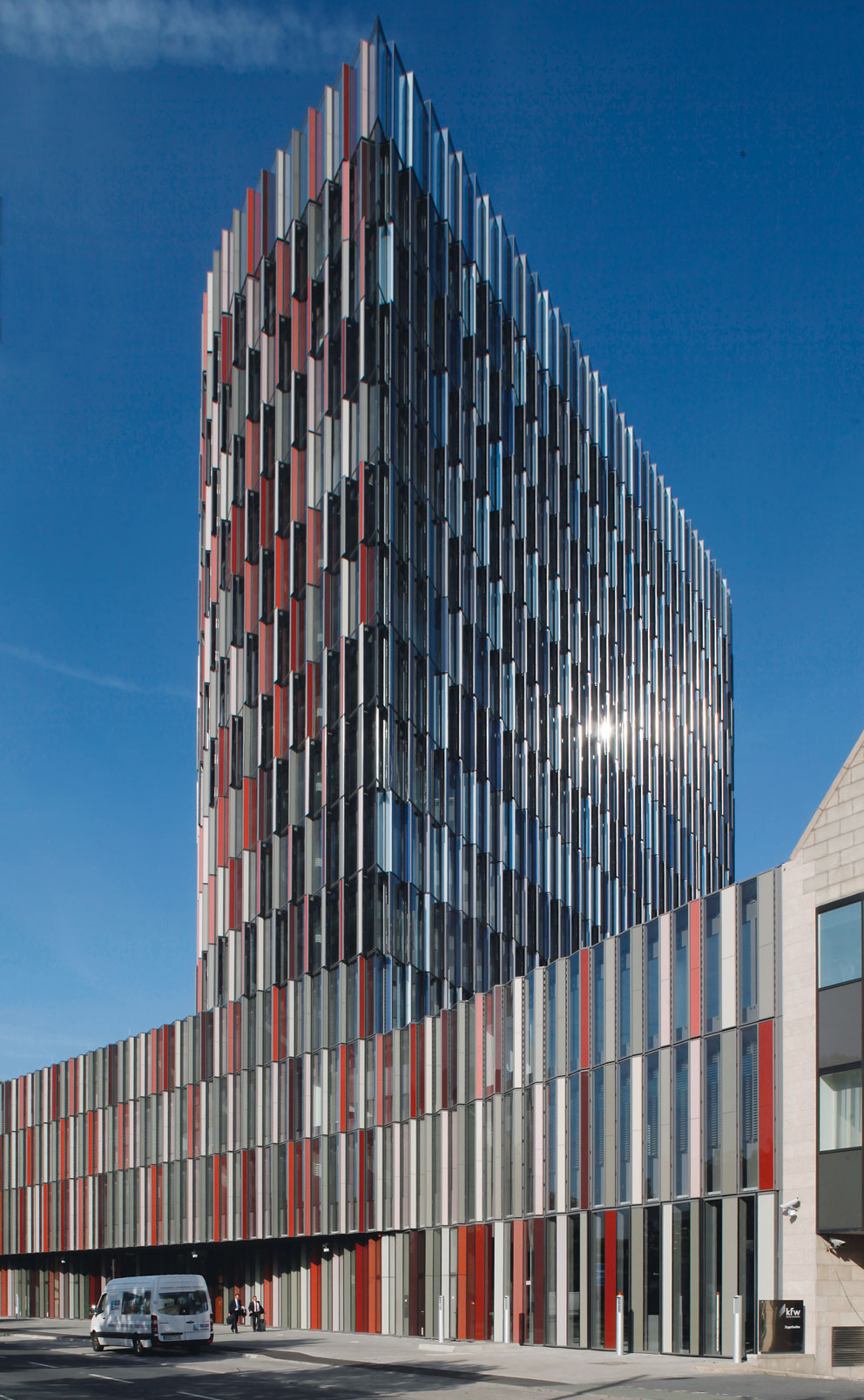 When the Deutsche Bibliothek (the antecedent of the Deutsche Nationalbibliothek, the German National Library) moved into new premises on Adickesallee in 1997, the old library was demolished, and on the site the Kreditanstalt für Wiederaufbau (KfW) began to build a high-rise in 2006 for its subsidiary, the KfW IPEX-Bank. A highly original structure consisting of a slim slab rising from an undulating three-storey base now completes the KfW headquarters near the Palmengarten. While the base is flush with the street and matches the eaves height of the neighbouring Nordarkade, the highrise points only its narrow side streetwards, thus predominantly facing the park and main KfW building.The polychromatic skin of the double façade creates a striking visual effect. But the building’s most unusual feature is its wind-driven ventilation system: a horizontal air cavity in the façade, dubbed a ‘pressure ring’ by the design team, maintains a ring of positive pressure around the building, and the pressure differentials are used to generate natural cross-ventilation inside. Narrow ventilation flaps in the outer façade regulate the air flow. This pioneering façade type helps make this one of the most energy-efficient office buildings in the world. (Evelyn Steiner) 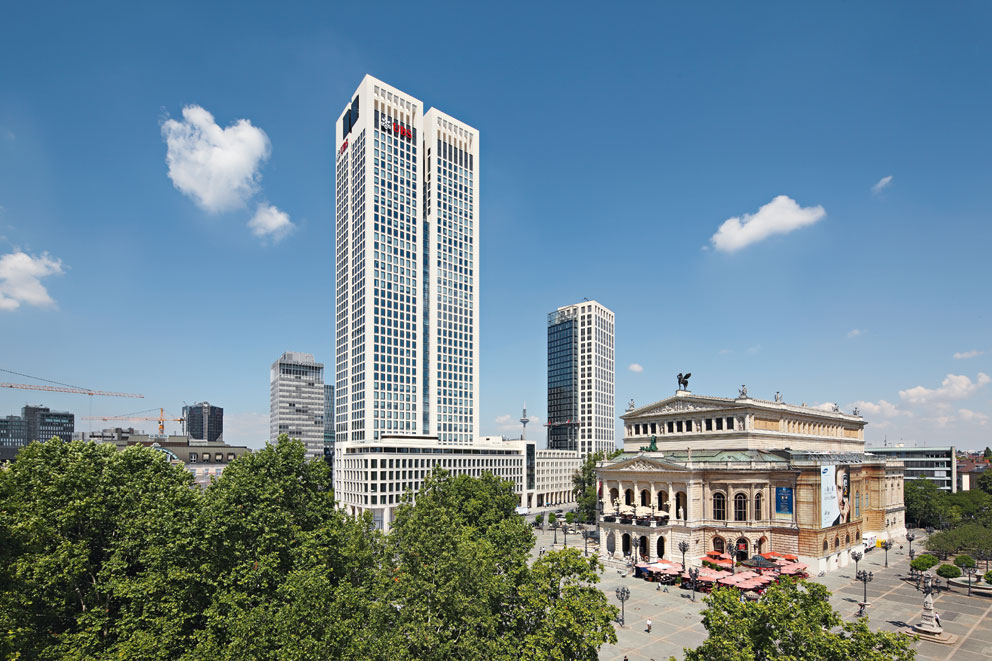 The first time anyone suggested putting a cluster of towers on Opernplatz was in 1927, although it was not meant entirely seriously. But it was not until 1959 that the Zürich-Haus began to turn this vision into a reality, marking the beginning of high-rise development in the Westend. In 1938, as a consequence of the first wave of ‘Aryanisation’, a piece of parkland belonging to the Jewish banking family Rothschild became city property. Once the war was over, the Rothschilds lodged a claim for the land to be returned, and a third of it was indeed returned as an approved development site. The remaining land is now occupied by the Rothschildpark. The Zurich insurance company bought the site in the late 1950s and built its German headquarters there. In response to the planning restrictions – any development must frame the Opernplatz as well as being open to the park – the architect designed a slender tower with a seven-storey podium building. For the time, both design and façade construction were novel: the top profile of the Zürich-Haus and the floor plan were uncompromisingly square. Individual thin sandwich elements of blue enamelled glass and sheet metal were used for the curtain wall which surrounds a reinforced concrete core. The company had a 17-storey extension built in 1965 to the west of the Zürich-Haus. Ultimately, listed building status was removed; in 2002 the Zürich-Haus was demolished. The new developer, Tishman Speyer, had the 170-metre Opernturm built in its place. Thanks to its light limestone façade, this new building references the Alte Oper, designed by Richard Lucae and built between 1873 and 1880. The massive cuboid is split by a vertical slit in its façade, so that the solitaire looks as if it was a twin tower. The perimeter block with arcades is set at the eaves height of the neighbouring low buildings, and thus mediates between these and the soaring Opernturm. (Myriam Pflugmann)