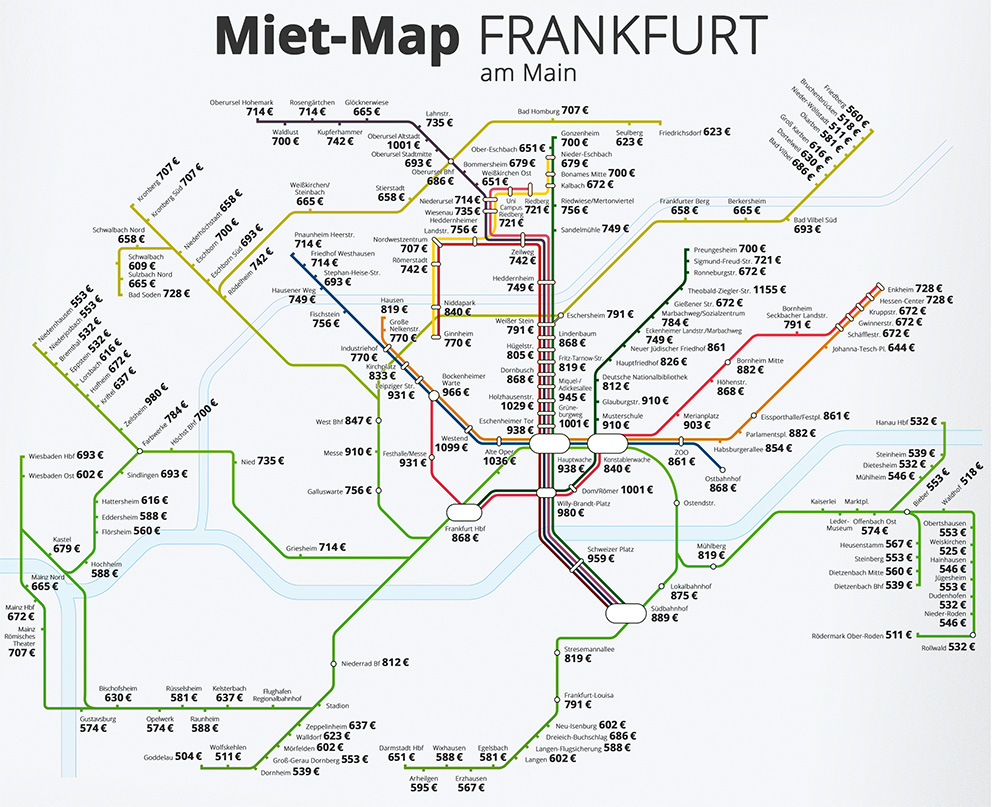 Renting in Frankfurt: The rental prices refer to an average cold rent for a two-room apartment of 70 m². Map © Immobilien Scout 24

Nation-builder Otto von Bismarck once famously quipped that “politics is the art of the possible”. Society has advanced since, so one might think that all the more has become possible. What Pilot Otto evidently did not anticipate was local politics, where the scope of the possible seems to be tiny. Or so recent discussions about mastering the challenges of providing housing, and specifically affordable housing in German cities would seem to suggest. Especially when it comes to Germany’s key small big city, Frankfurt, with its 720,000 inhabitants at night, and well over twice that number during the day.
The debate has been fiery in Frankfurt. Most recently, what started out as a masterplan in 1999 for redeveloping the old freight shunting yards emerged in 2015 as the new Europaviertel district. Chic avenues with green inner courtyards, fashionable eateries and a rooftop spa, squeezed between the trade-fair complex and an old, underdeveloped (i.e., poor and dilapidated) neighborhood, the Gallus. The sexy new apartments are not cheap – yet come courtesy of ABG Holding, the municipal housing association. The indignant outcries at such a use of public funds were inevitable. From good idea to civic disaster in 16 years. (A lesser known fact: ABG is building 6,000 subsidized 1 and 2-pegged dwellings, with rents between 5 and 12 Euros a square meter.)

As regards Frankfurt, the fact is that the city’s population is growing far faster than was predicted back in the 1990s. Some 30,000 new Frankfurters are looking for affordable dwellings, and another 120,000 are expected to follow over the next two decades or so. The majority will be in the 30-40 year-old bracket, possibly single, and, so the City Planning Dept. says, over half will not be German – whatever that may mean. How to absorb that number, or rather squeeze them into city limits that are very confined? Not to forget the ever increasing number of students enrolling in Frankfurt’s tertiary education institutes. And a forecast 12,000 refugees a year.
With local elections round the corner, one would expect opinions to diverge vastly, perhaps along ideological lines, on what to do. The panel discussion at DAM on “Wohnungsbau in Frankfurt” showed this to be an illusion. The local politicians were not contemplating the art of the possible. After two hours debate, the big difference: Should new building projects be 30% or 50% social welfare housing.
There were a few minor differences. The SPD suggested the tool of choice was for the City to sell land for residential development at well below the impossibly high market rate. A great idea on paper, but since the City today hardly has any land left, only a paper tiger. Ideology comes a cropper when confronted by the reality check of planning processes. Declaring you will double the money committed to social welfare housing does not necessarily solve the problem if there is nowhere to invest it.
The GREENS have been busy while in government, creating cost-effective homes for the 30,000 in the queue and to this end have defined 30 new development zones. Laudable. But by the time the new zones are being built, the queue will be much longer as the statistics show, so not much of a solution. They have rightly prioritized integrated planning with, ticking all the boxes on infrastructure, transport planning, ecological impact, mixed usage and affordability, but cannot answer a very simple question: Where to build next?

Green field? Brown field? Back to the fields

Should we sacrifice part of the green belt for new homes? Or convert office space? There are 1.8 million m2 of vacant office space – quite a brownfield. But conversions are difficult, and no one wants to sacrifice parkland. The CDU, like the Free Citizens, promotes increasing densities, e.g., expanding attics, adding a floor on top of a building here and there, and annulling the local statute that car-parking space must then be provided. This does not get round the basic problem: There are only so many suitable buildings. In the absence of space, DIE LINKEN go typically arm-chair revolutionary and say people should stay in rural areas. The simple fact is: You can tell people in rural areas to stay there until you are Rosa-Luxembourg-red in the face. Even assuming they listen, they are not the majority source of the migration into cities anyway.

The FDP thinks freely and wants to liberally lessen red-tape in building approvals, believing the market will then take care of everything. Such as the students it wishes to support. How can someone on the maximum of 600+ Euros Bafög (grant), fast-tracking to a Bachelor’s, afford to live off the 100+ Euros left after paying the rent for a very average flat share room. If Frankfurt really does wish to be a Knowledge City, then it needs to do better. And the smart kids will notice that the above ideas smack of fake stop-gaps, whereas planning means long-term solutions. And certainly a lot longer than a term in office or college.
On the day, the moderators of the panel discussion, eagerly attended by some 120 soon-to-be-disappointed citizens, make a disastrous mistake. They announce at the beginning that the politicos will all be asked at the end what they hope to achieve in the next five years. This is actually the root of the whole confusion. Five years is a short time in planning terms. The moderators simply nurture the hubris of the politicians. The current slogan postered round town is “Frankfurts Staus beginnen im Römer.” The real gridlock is in the politicians’ minds as on balance, the prevailing mood is one of helplessness. : What none of the politicians evidently dare say is that the issue of social housing is not about whether the glass is half empty or half full, but simply that Frankfurt is full.
Changing that means expanding Frankfurt. And going back to the idea first expressed when the Europaviertel was on the drawing board, namely that polycentric conurbations were the key to the future. Maybe they still are. 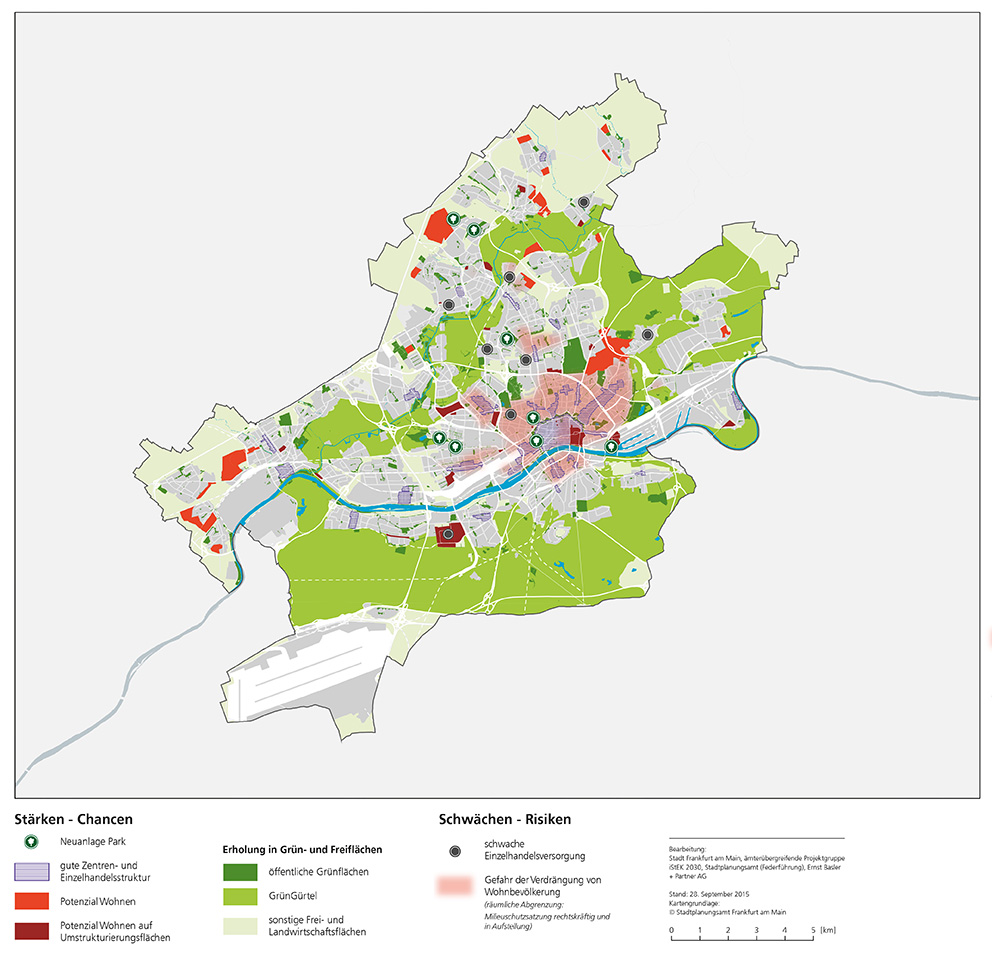