Rounded tables, black-and-white tiled flooring and massive gold picture frames – the Platine Hotel Paris promises to take its guests back to the 1950s, to be more precise, to the Golden Age of American film. Marilyn Monroe, James Dean, Marlon Brando or Audrey Hepburn – they all played a pivotal role in shaping Hollywood and indeed cinema in this decade. The Platine Hotel pays homage to Marilyn Monroe and the charm of such unforgettable films as “Some Like It Hot” and “Gentlemen Prefer Blondes”. Close to the Eiffel Tower, even its name alludes to the platinum blond of the star’s famous coiffure. Filled with larger-than-life portraits, the hotel is one large tribute to its star: a sensuous study over the bed head; a series of portraits in a blown-up film strip, streaming from the head of the bed up across the ceiling; or a feisty snapshot in the bathroom. The hotel is dressed from head to toe in Marilyn Monroe.

Vincent Bastie, the architect who designed the hotel, has been a driving force in the Parisian hotel industry for over 20 years now and in recent years in particular has masterminded some of the most beautiful hotels in the French capital. He likes to tell a story with each of his projects, transporting the guest to another world. Bastie uses metal globe lights, bright red tiling and rounded, curved bathroom fittings to paint the familiar picture of 1950s America. And the washbasin mixers from the PuraVida range by bathroom and sanitary specialists Hansgrohe fit into Bastie’s design scheme perfectly. The slim-line mixers combine white, high-gloss surfaces with dazzling chrome and turn these modern washbasins into real eye-catchers. In addition to the PuraVida range, Hansgrohe also supplied Raindance hand showers and Raindance E shoulder-wide overhead showerheads. All models feature Hansgrohe AirPower technology, whereby water and air are swirled together making for a pleasant rain shower experience, enveloping every inch of the user’s skin with plump droplets. The spa area also boasts fittings and showerheads by Hansgrohe, where, after a session in the sauna, an invigorating, multi-jet massage proves a real treat.

What the guest doesn’t see in the elegant bathrooms however is that the showers and faucets save both water and energy. For thanks to EcoSmart technology, Hansgrohe products use just half the water conventional showerheads and fittings do. All washbasin mixers are fitted with special aerators that activate the water with air and thus make for an economic flow rate of a maximum of five liters per minute while maintaining a luxurious, full water flow. A combination of air intake and flow control ensures the economical use of both water and energy. Offering considerable potential savings, this technology is particularly beneficial for hotels with a large number of bathrooms. 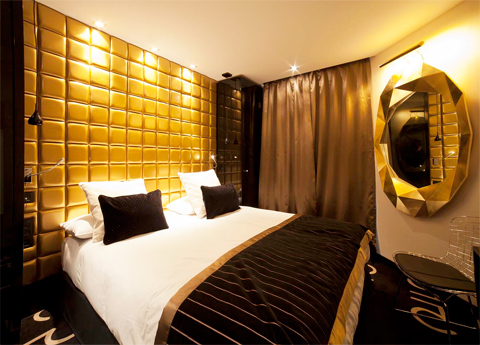 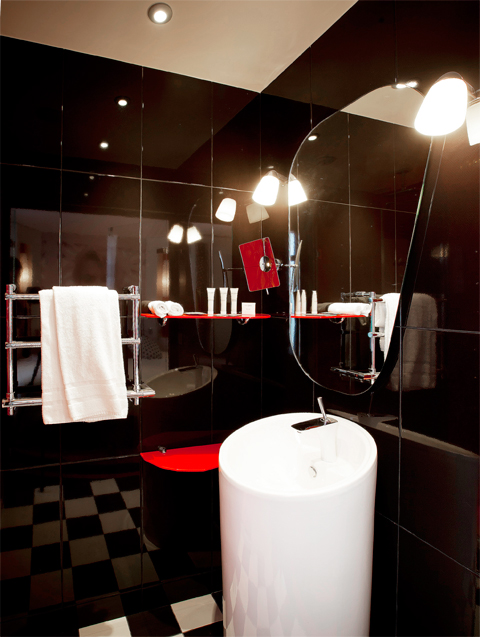 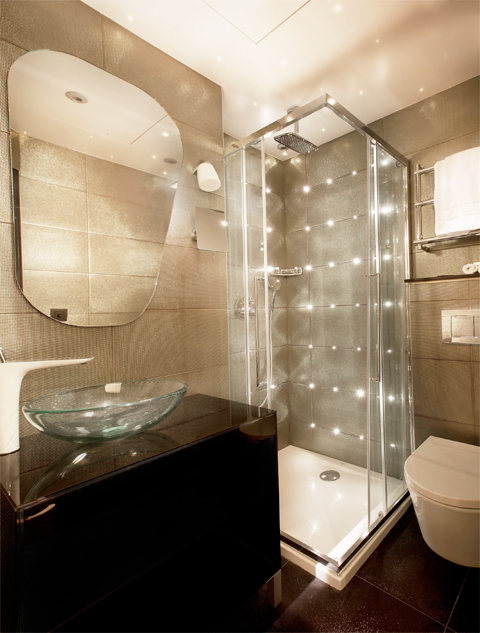 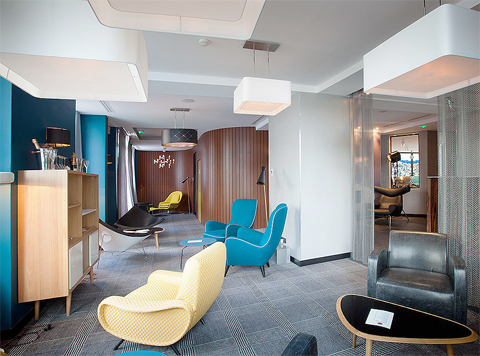 Heavy armchairs to sink into and cool, curved tables invite guests to spend some time in the Platine Hotel salon, photo © Jimy Delpire 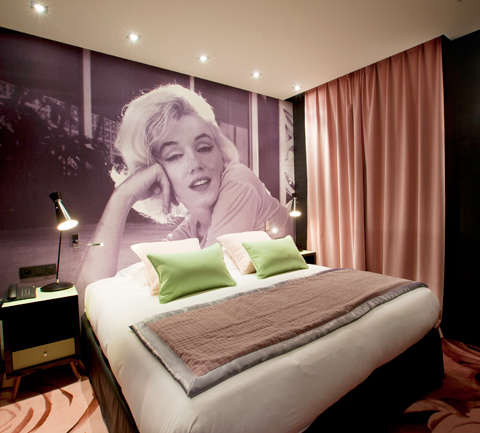 The American star greets the hotel guests in each and every room – at times lascivious, at others cheerful or carefree, photo © Jimy Delpire 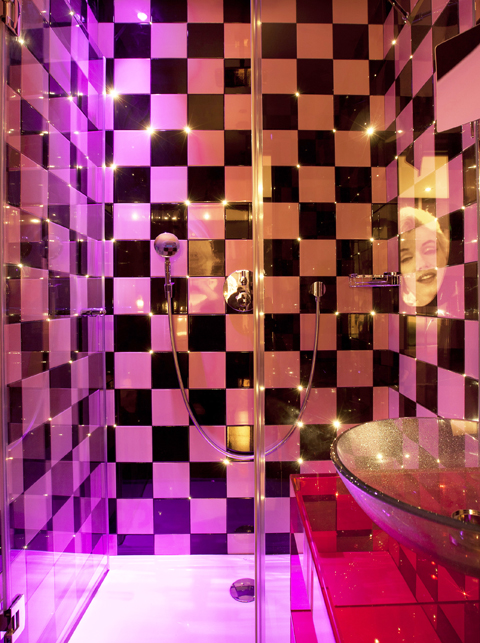 Stars of the bathroom – showerheads by Hansgrohe, photo © Jimy Delpire 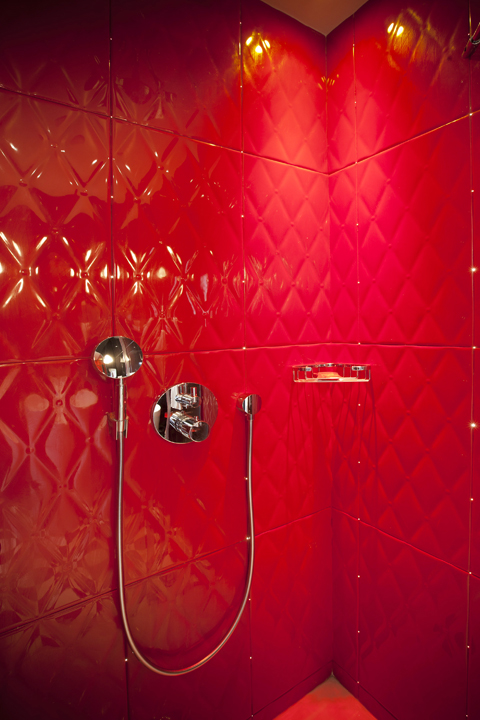 The shower is adorned with glistening tiles and sparkling showerheads by Hansgrohe, photo © Jimy Delpire 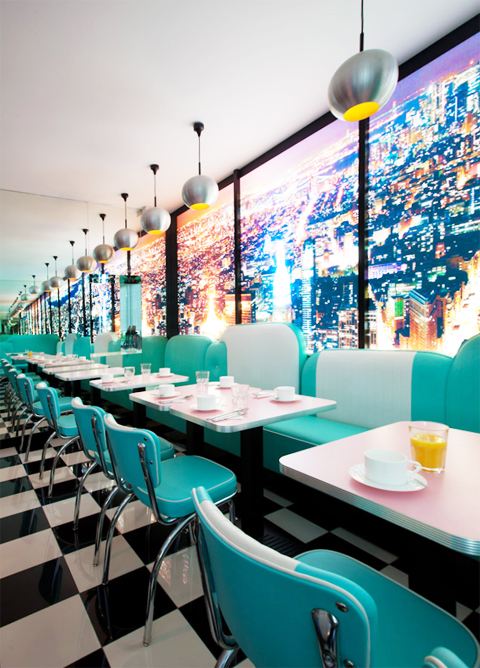 The 1950s provided architect Vincent Bastie with the inspiration for his design for the Platine Hotel in Paris, photo © Jimy Delpire
Advertisement