top
Get knotted!
IN CONVERSATION: 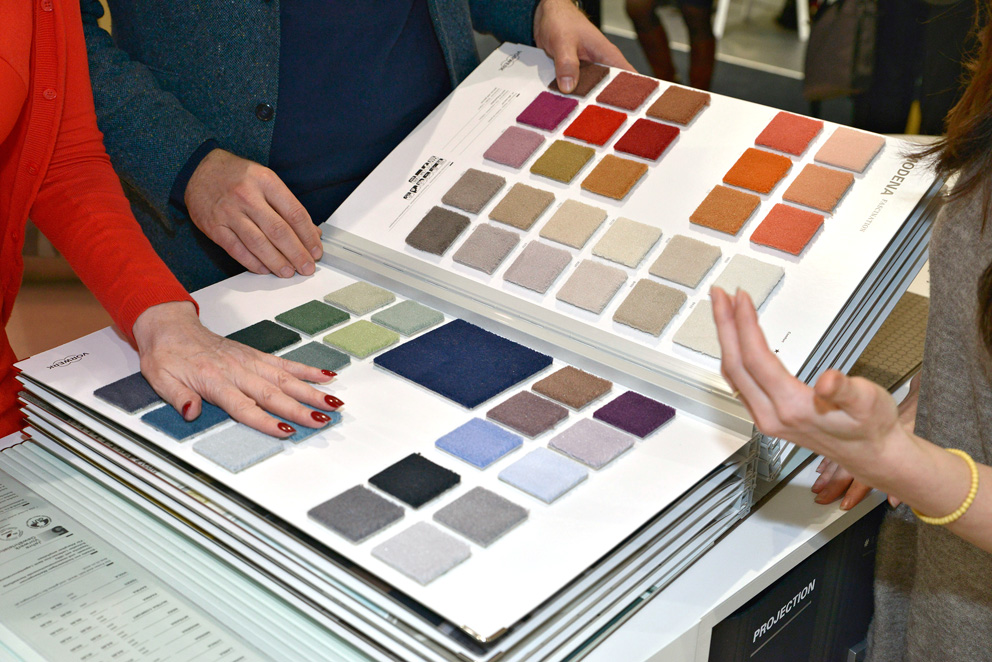 Feeling the carpet: The collection "Fascination" at Vorwerk with 350 revised colors was one of the highlights of this year's Domotex. Photo © Tyler Loco

Piero Lissoni, Milan-based designer and architect, and Vanessa Brady, London-based interior architect, were the Special Guests at the Domotex in Hanover. Together with Robert Volhard, founder of Stylepark, they wandered round the trade-fair halls together and perused carpets in new colors, Astroturf that seemed almost to be real grass, and modern hand-knotted carpets from India and Iran. Martina Metzner accompanied them on their tour, looked over their shoulders, and listened to what they had to say. 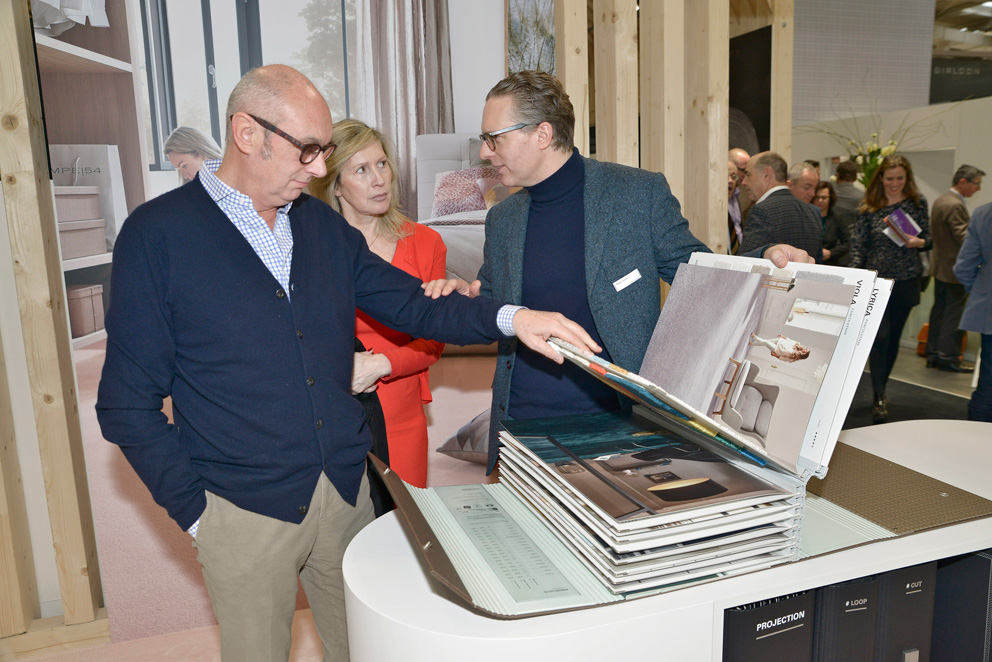 Martina Metzner: Mr. Lissoni, how do you choose carpets for your projects?

Piero Lissoni: I always chose a specific materials mix for a project – not just a single carpet or flooring. What counts is to get the mix right. Once the house and interior design is done, I then tend to brood over which carpets to add. I’ve just finished designing a private home, where by the end I had deployed customized creamy white carpets almost throughout, with the exception of the kitchen and bathroom. As regards Vorwerk’s new color range, which it developed with Giulio Ridolfo: Carpets and other floorings are subject to certain fashions – as are fabrics for upholstered furniture. Each season you need to present and champion new colors. I am admittedly interested in all these new colors, but I’m not a real fan of them. I prefer to work with a quiet, muted set of tones. 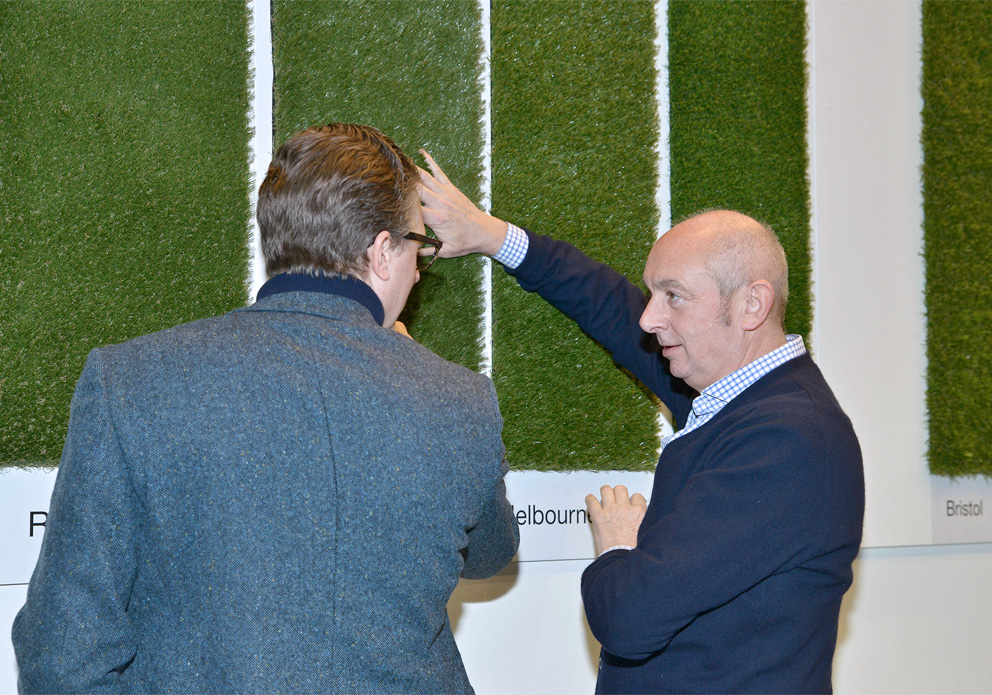 If green grass remains green all the time: At the Fungrass booth Piero Lissoni (on the r.) discovered Astroturf that was as good as real. Photo © Tyler Loco

Mrs. Brady, you develop interior designs for the beautiful, rich and noble. Can Astroturf be a solution?

Vanessa Brady: If you want to design a room such that it looks like it is outdoors, then this kind of artificial lawn is ideal, for example for a children’s room. The Fungrass covering is especially good because it can be used outside, too: The hole in the underlay mean that water can run off.

Piero Lissoni: In the United States they use artificial grass for all the sports stadiums, but less so here in Europe. The Fungrass lawn is great and it feels very authentic. 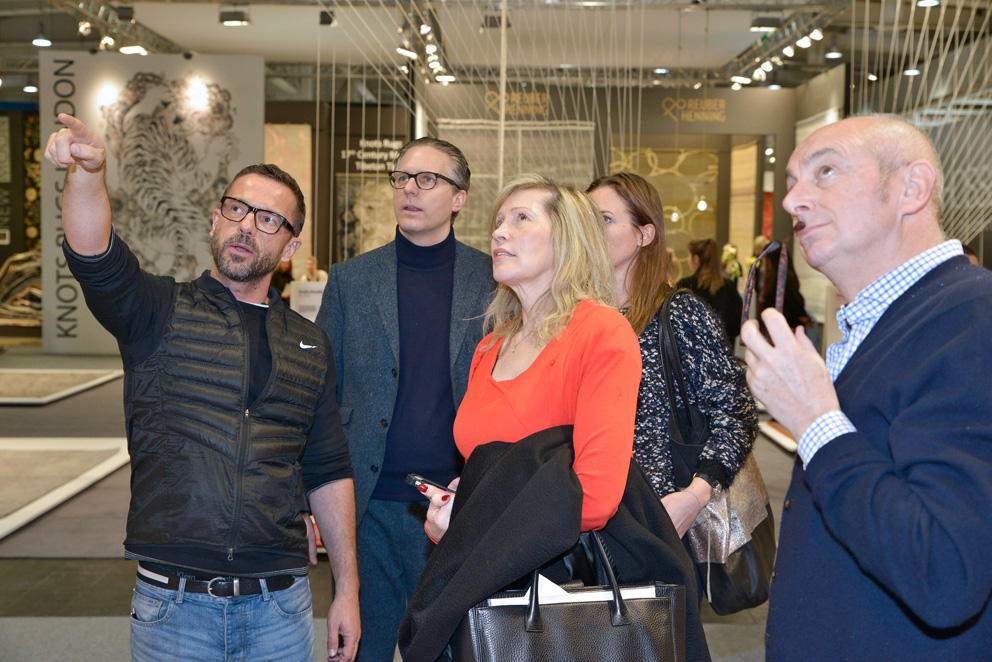 Why not drift through life: Jürgen Dahlmanns of Rug Star (front l.) explains his “identity-strengthening carpets” to the group. Photo © Tyler Loco

Vanessa Brady: If I look at all your carpets then I would never imagine they were all designed by one and the same person.

Jürgen Dahlmanns: I don’t have any definite style. I tend to let myself drift through life and if something touches my heart then I adopt it for a while. I am an architect. For me, apartments and houses are identities. I want to help strengthen those identities. That is true beauty. It is not my carpet that defines or constitutes the interior design. It is only a fragment of the whole. 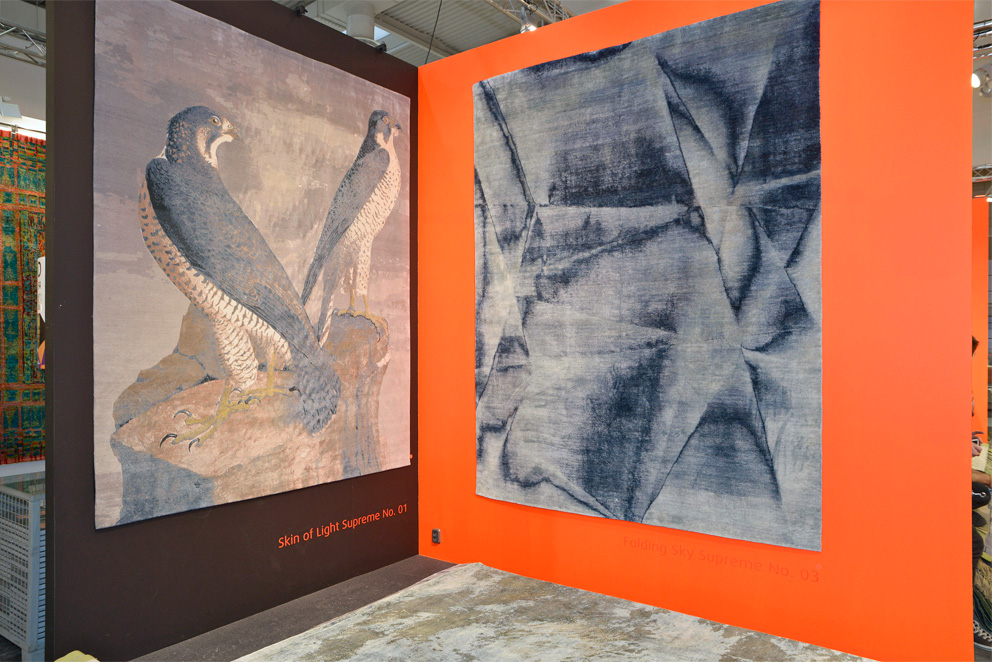 Sources of inspiration just as much in the 15th century as you can in the art of Marc Rothko: Carpets by Jürgen Dahlmanns. Photo © Tyler Loco

Vanessa Brady: So which are your new carpets?

Jürgen Dahlmanns: I’ve created a carpet that was inspired by a 15th century drawing. But the background reminds me more of Marc Rothko. So here I’ve got a Marc Rothko hiding behind birds. That’s cool. Many people work with old Oriental and increasingly with geometrical patterns. A few years back people scorned such things as cheap design. Now it’s en vogue. And the issue of quality has been key for some years now, because some makers tried to have the Persian knots woven elsewhere. I had my collection, woven with Persian knots, manufactured in Rajasthan, India – and also named it Rajasthan after the region. To show my esteem for the people who make these carpets. 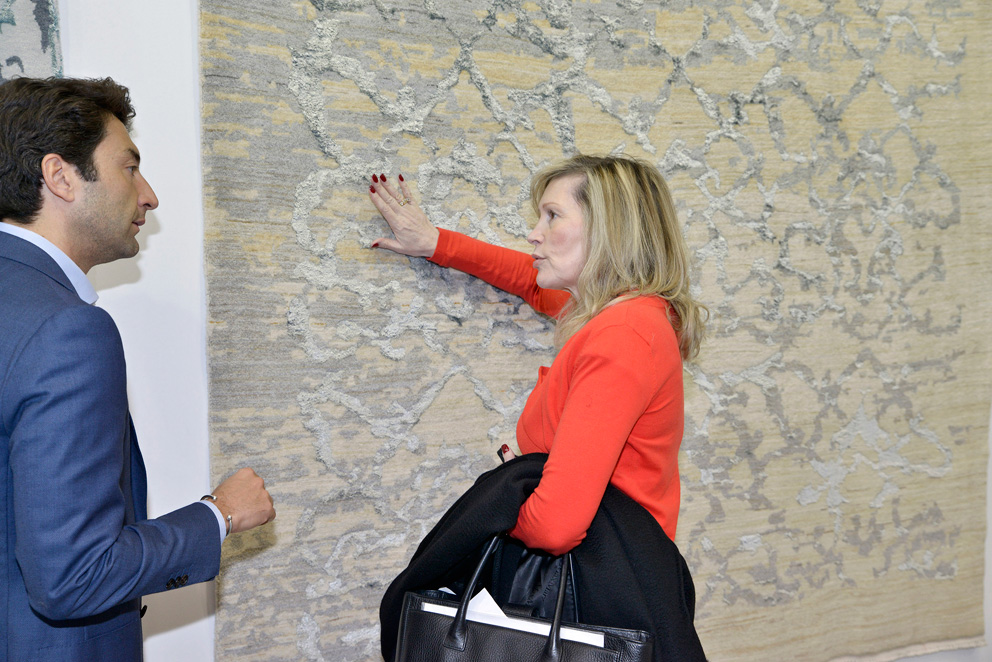 Mr Rezvani, what so special about your carpets?

Hossein Rezvani: I put a modern spin on traditional Persian patterns – and prioritize outstanding quality. Our carpets start at 400,000 knots per square meter. They are the finest in the world, as we have models with one million knots per square meter. Of later we’ve been working with undyed sheep’s wool, knotted direct off the sheep as it were. The carpet is called “Sahar”, belonging to "Sahara". Just imagine the wind were blowing on the fringe of the desert and exposes stony sections – such as on this carpet here.

Vanessa Brady: I’ve never seen anything like it. Can I order such a carpet with the size and color tailored to my requirements? If so, how long would you need to supply it?

Hossein Rezvani: We produce to the client’s specifications: anything is possible. As regards delivery times, I am definitely a German Iranian. If I say we will deliver in four months, then you’ll get it in three. 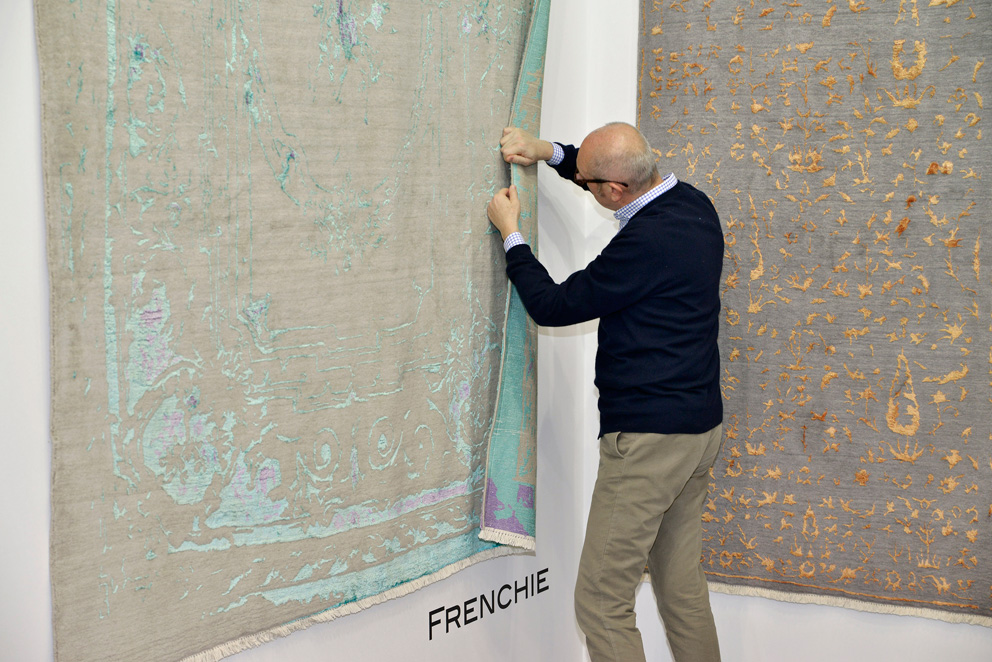 So who can count all the knots? Piero Lissoni checks out a carpet by Hossein Rezvani. Photo © Tyler Loco 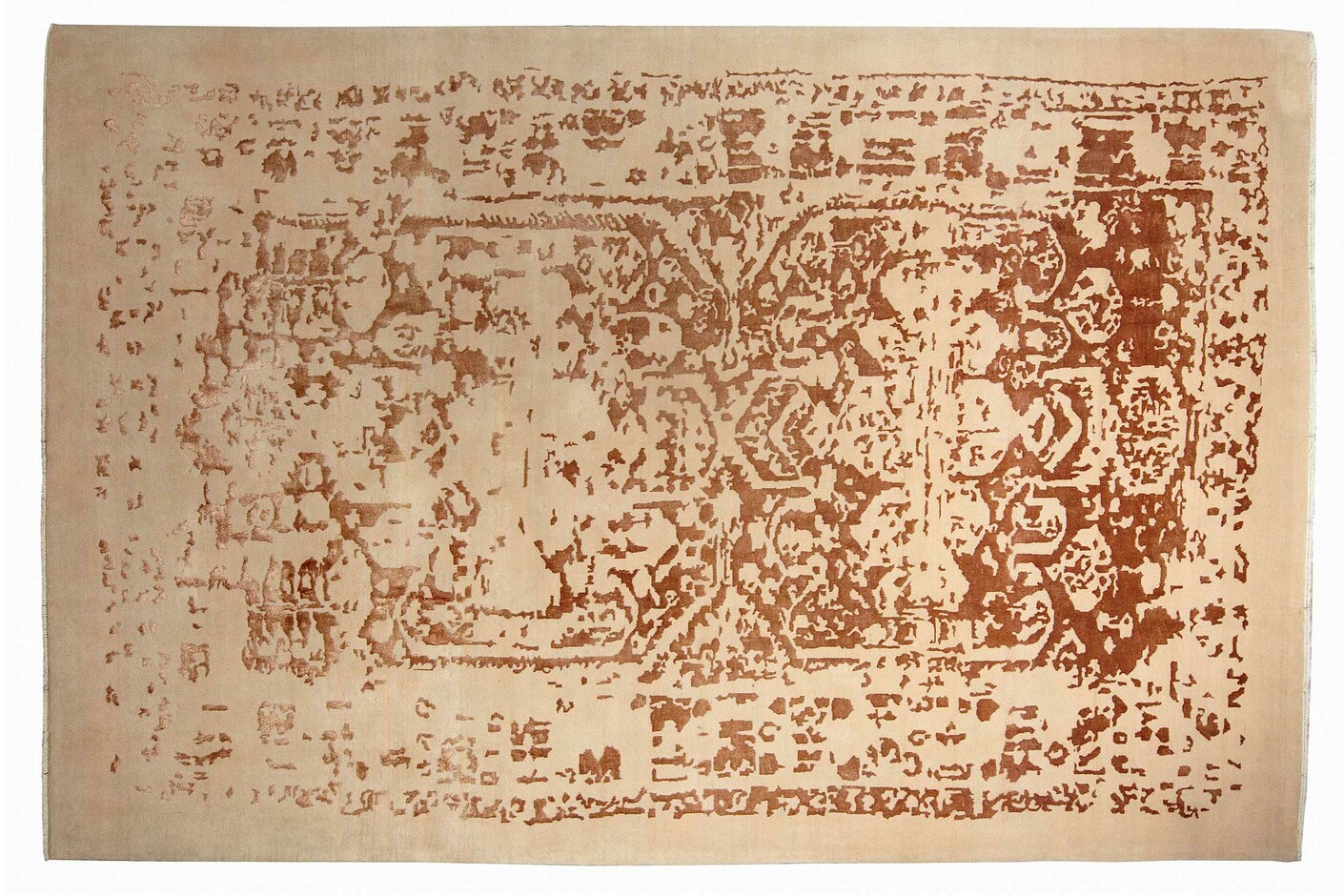 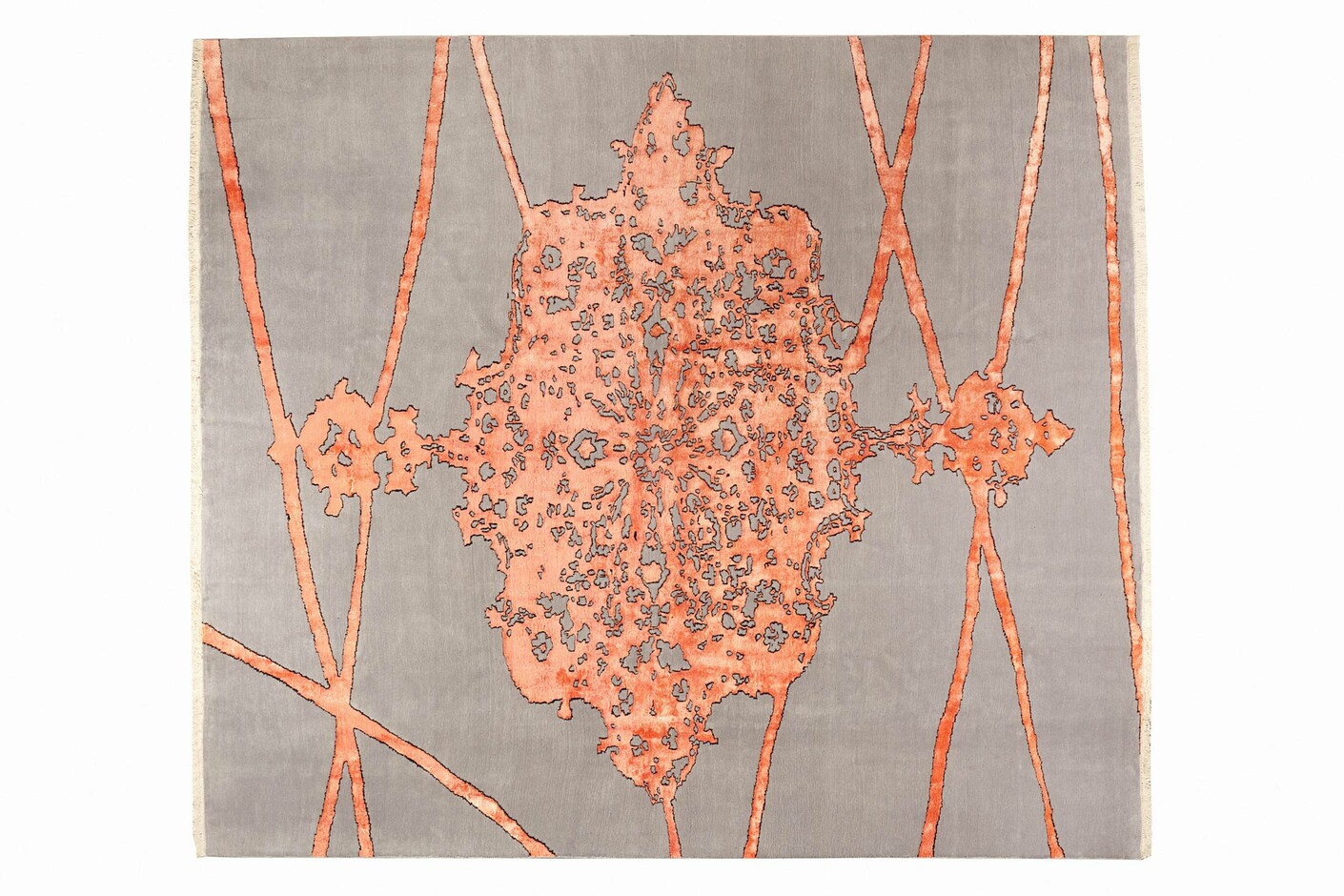 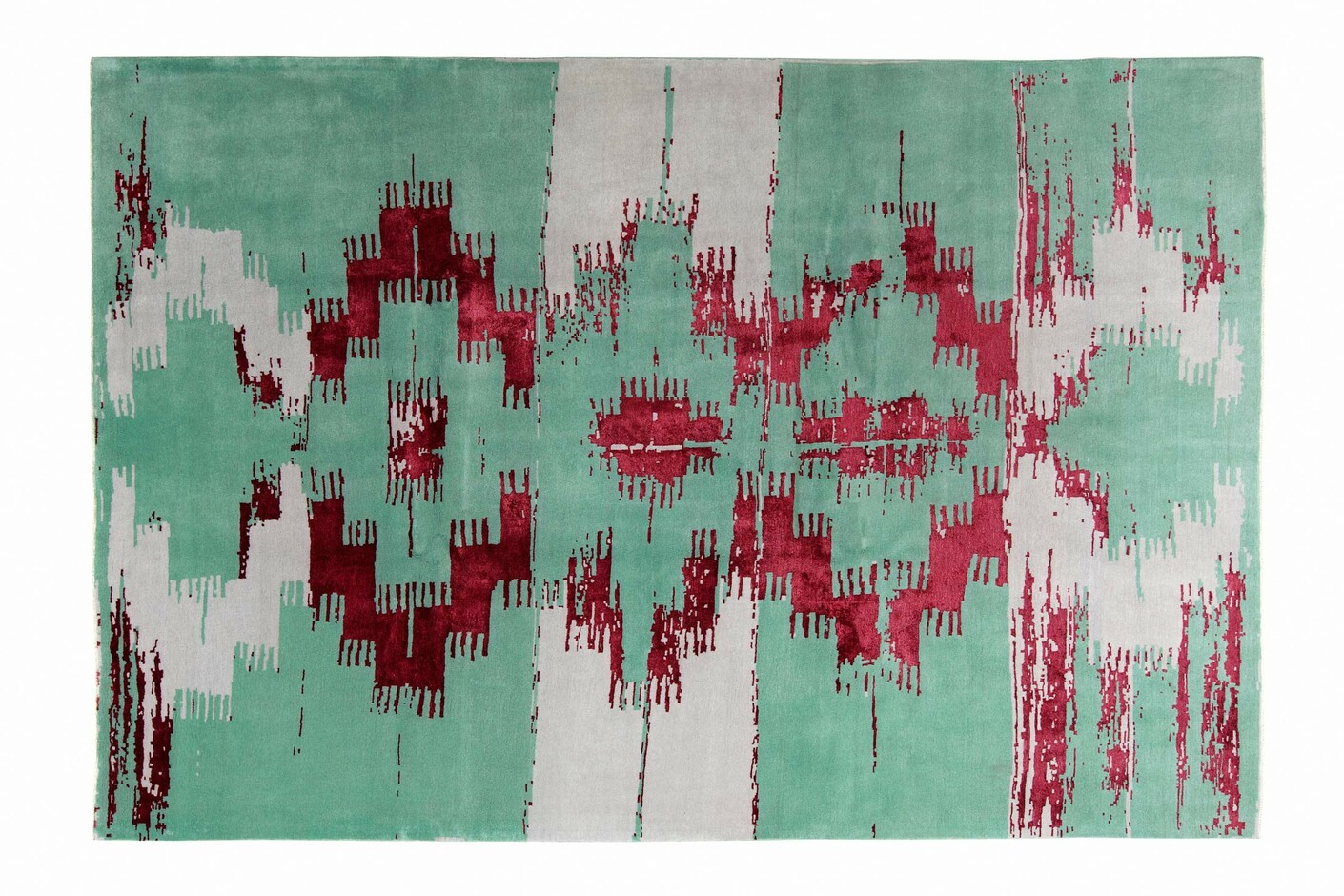 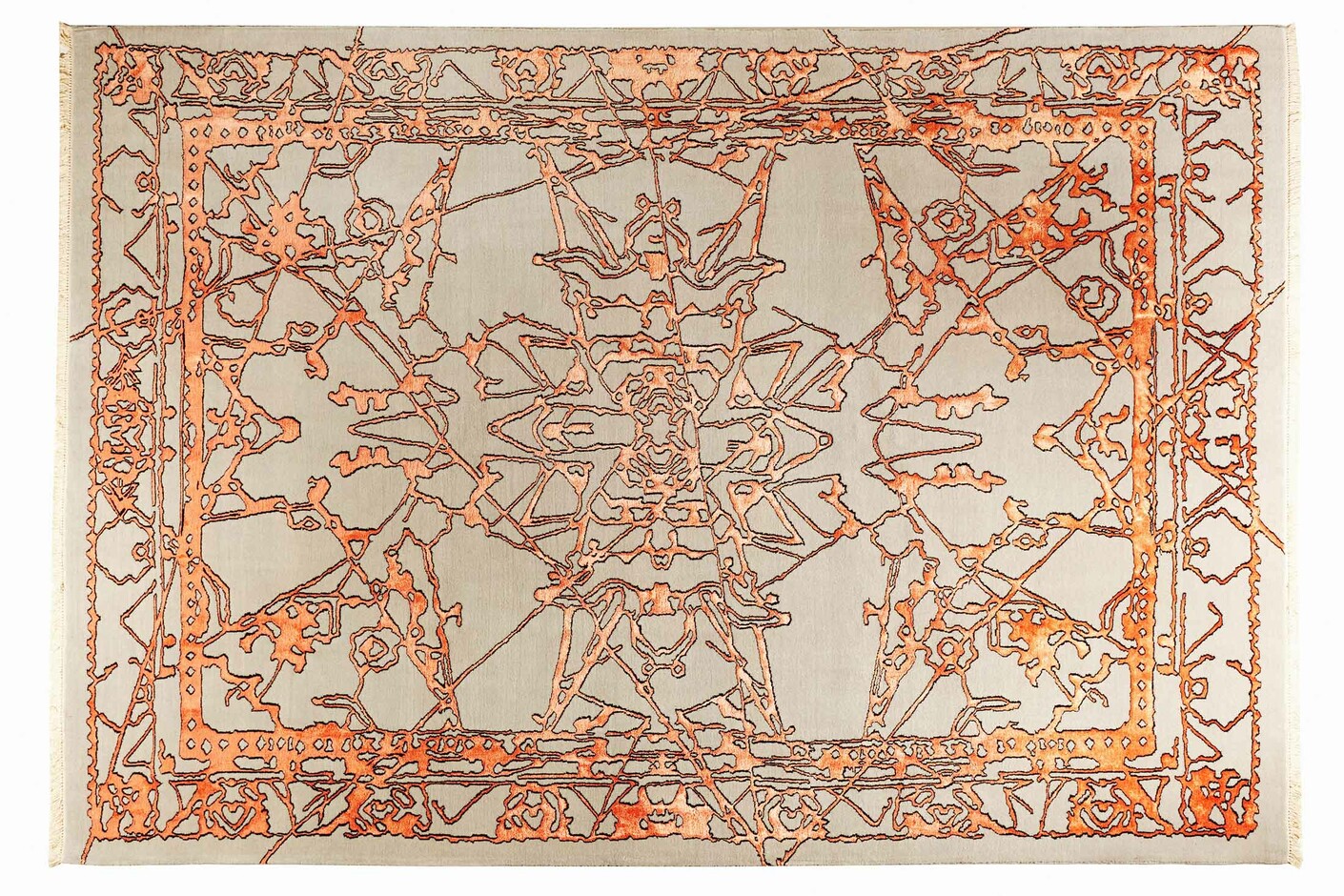 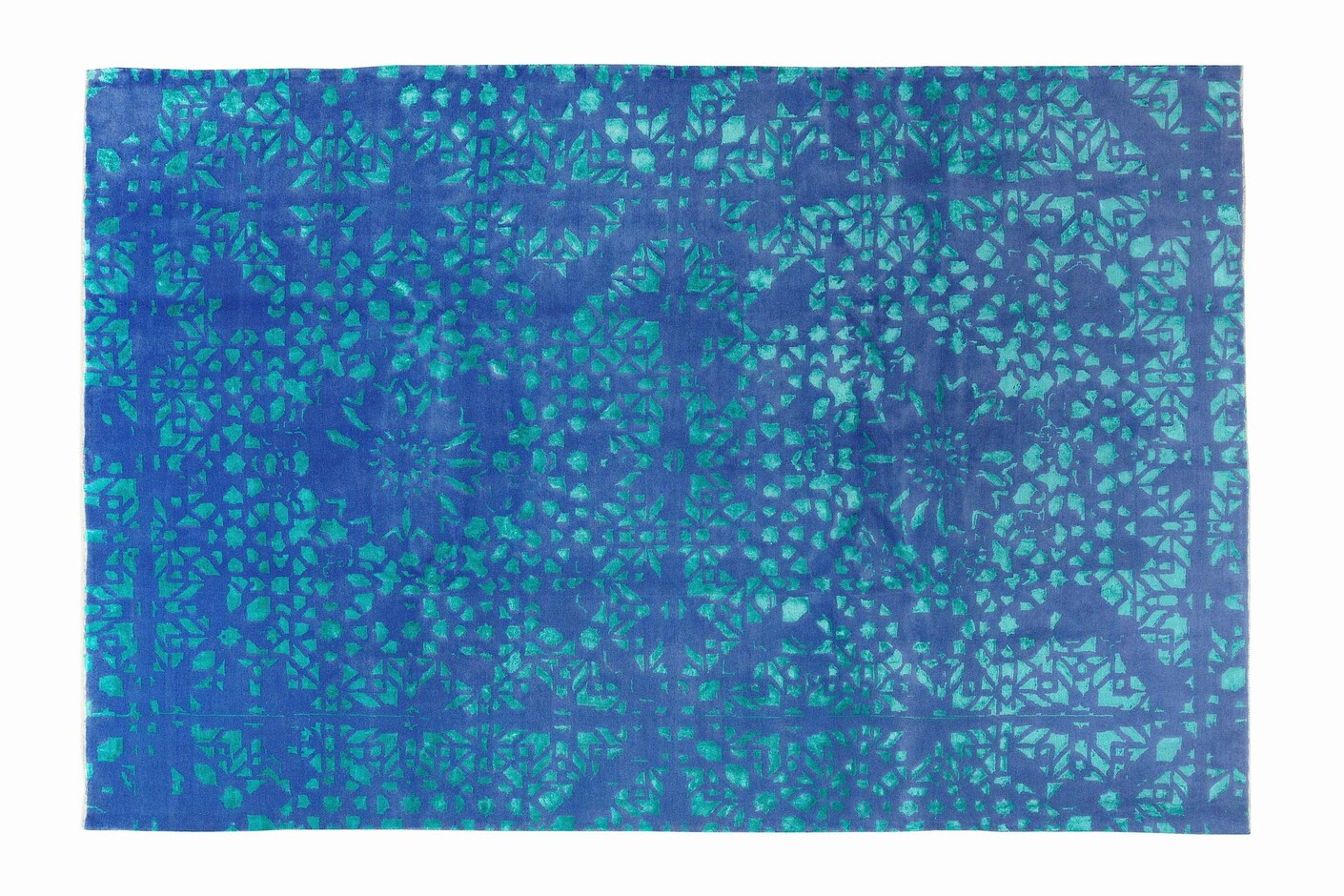 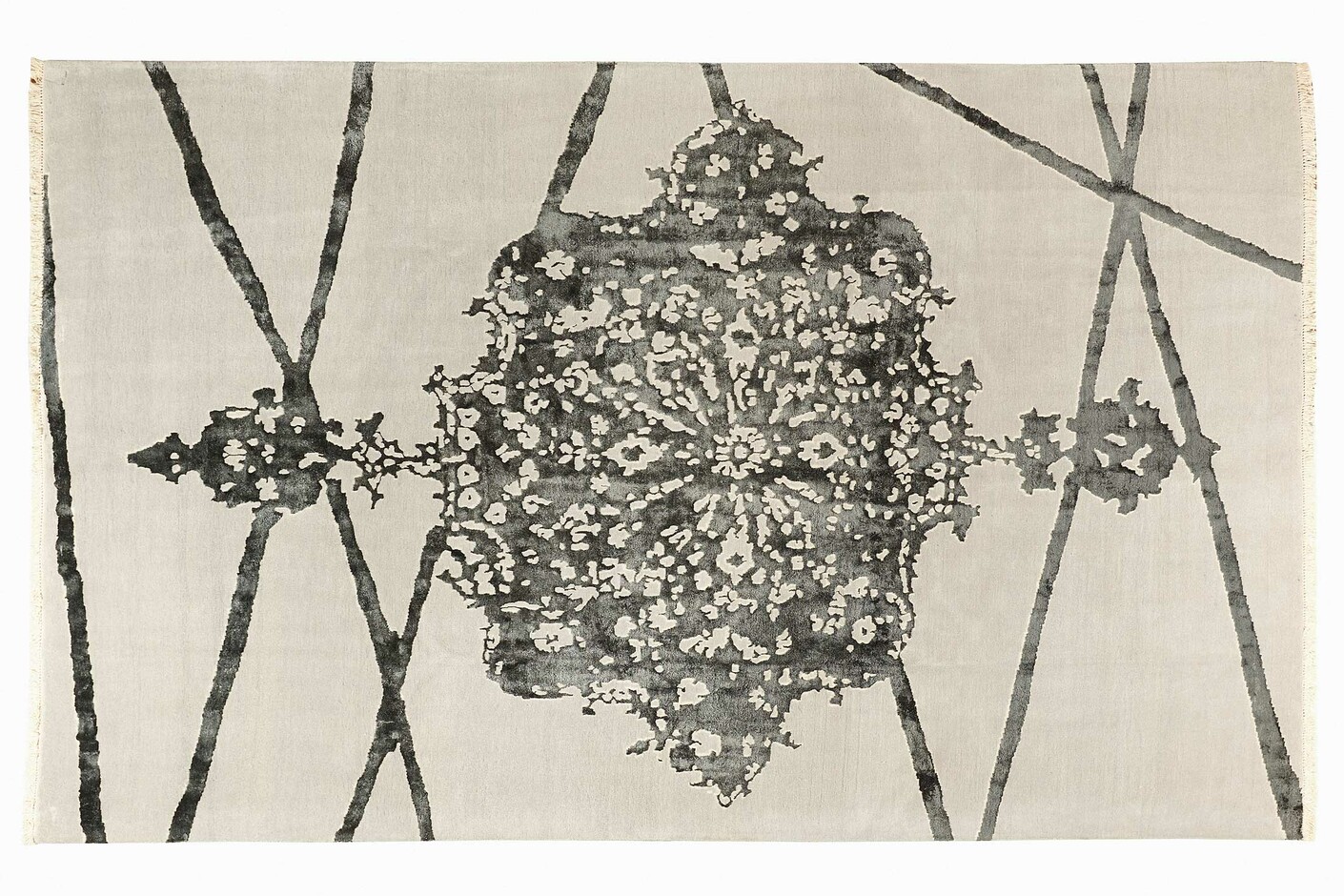 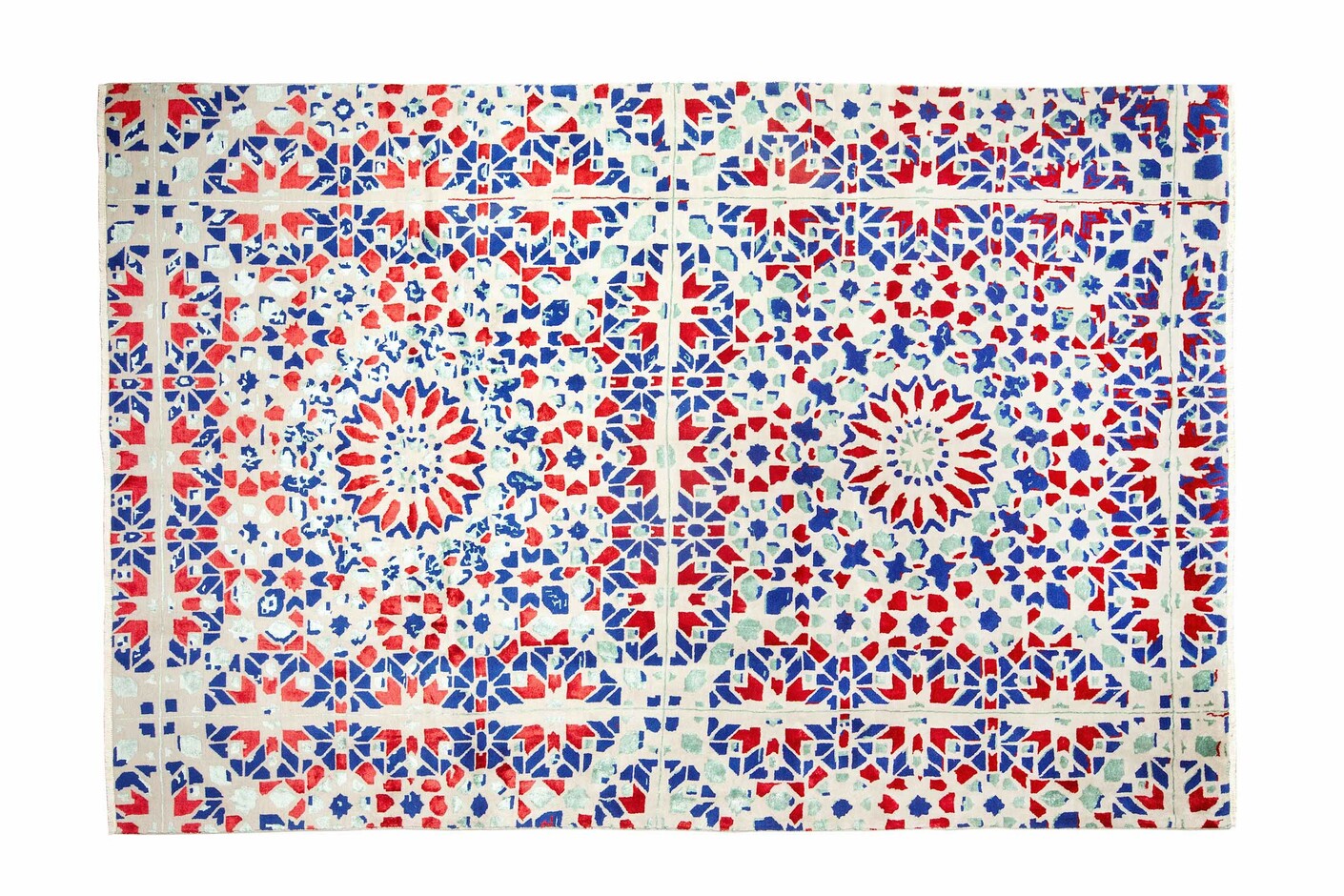 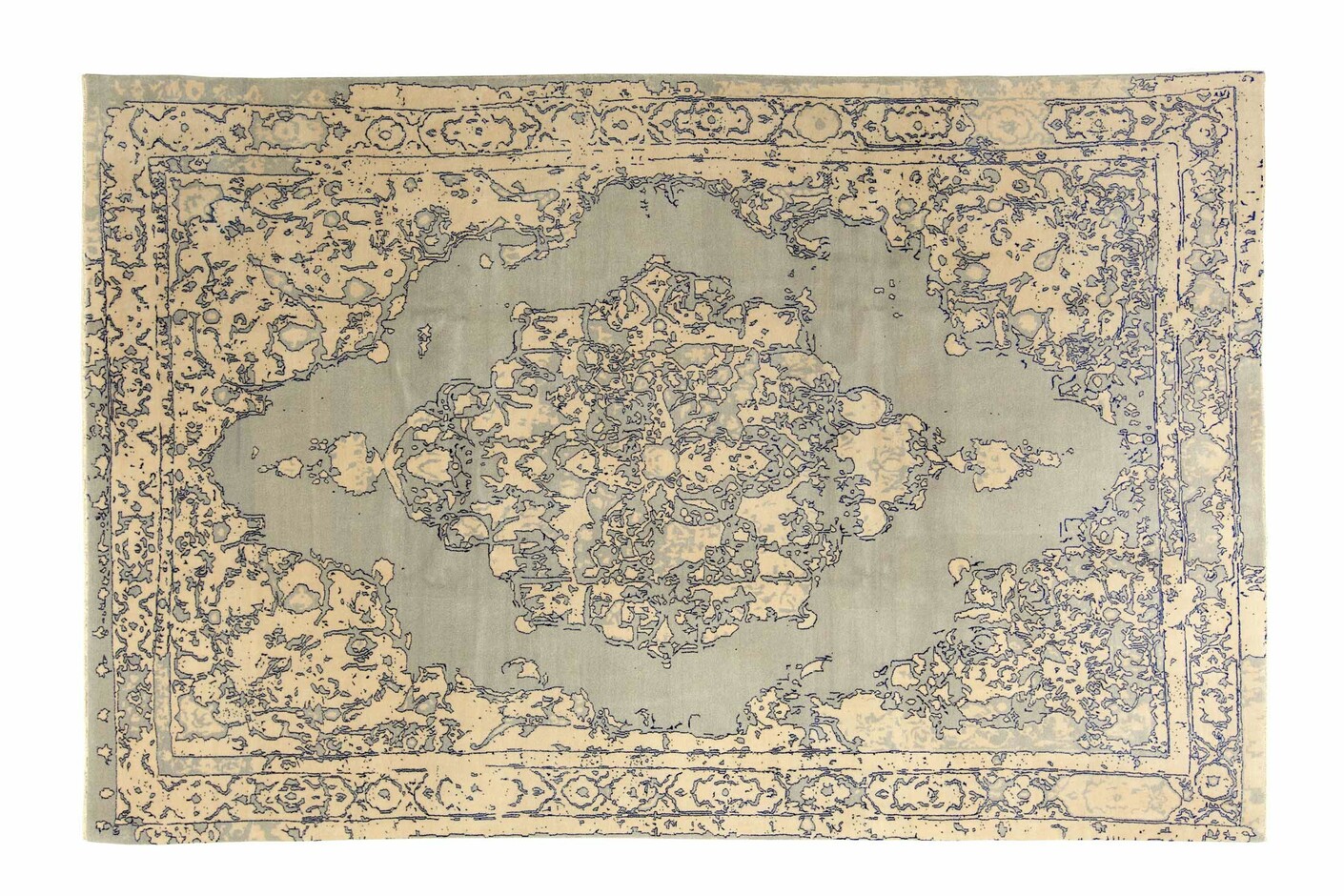 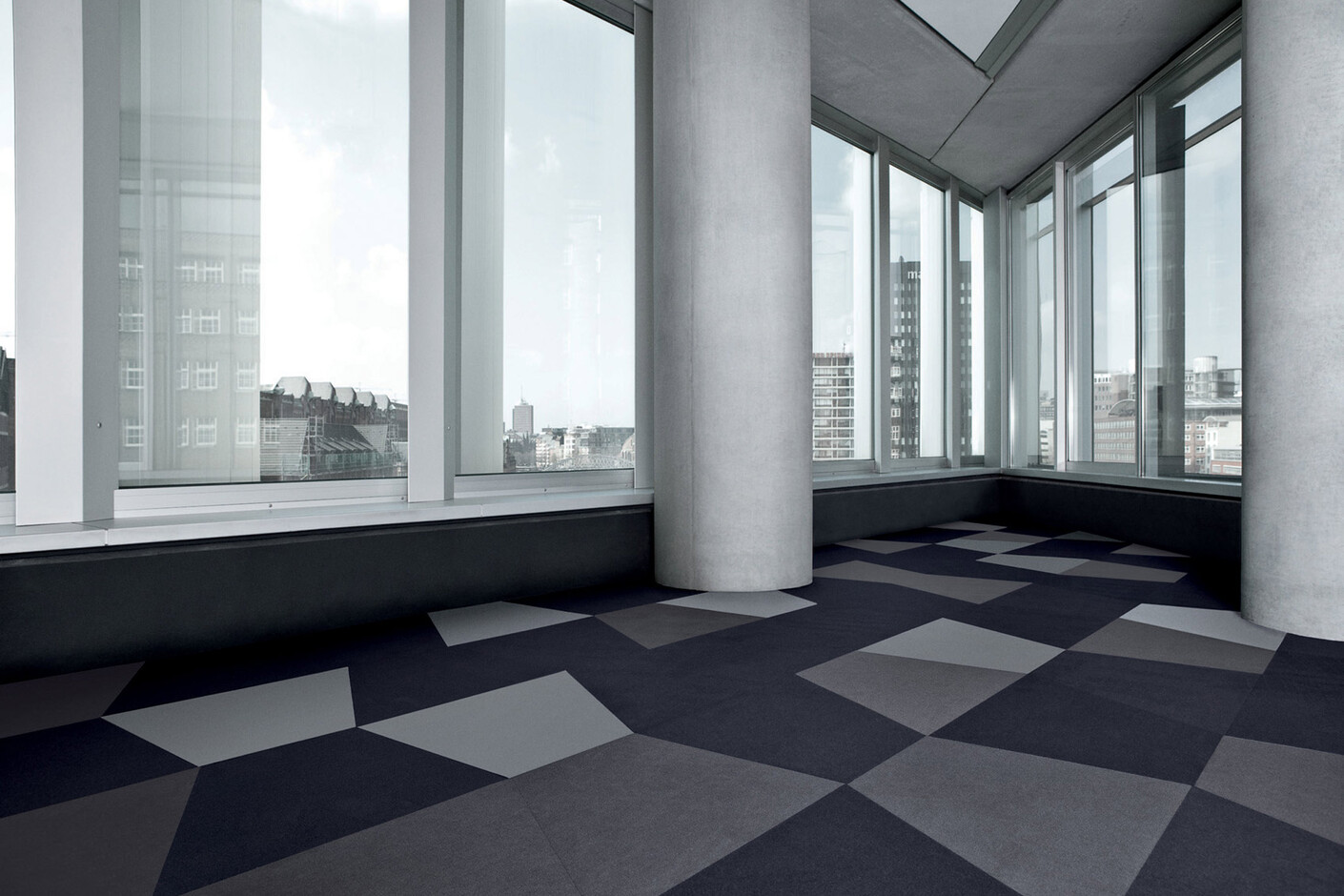 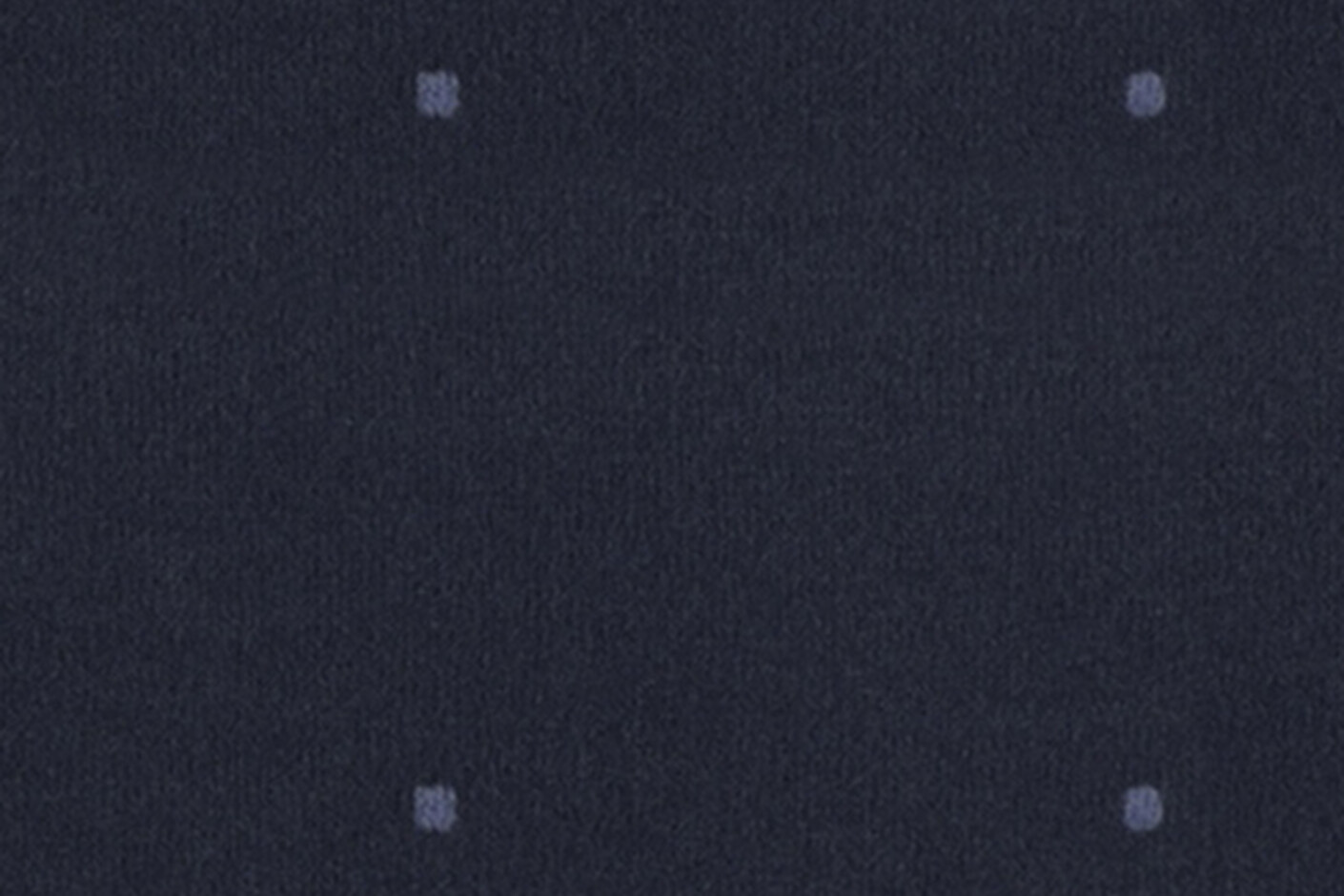 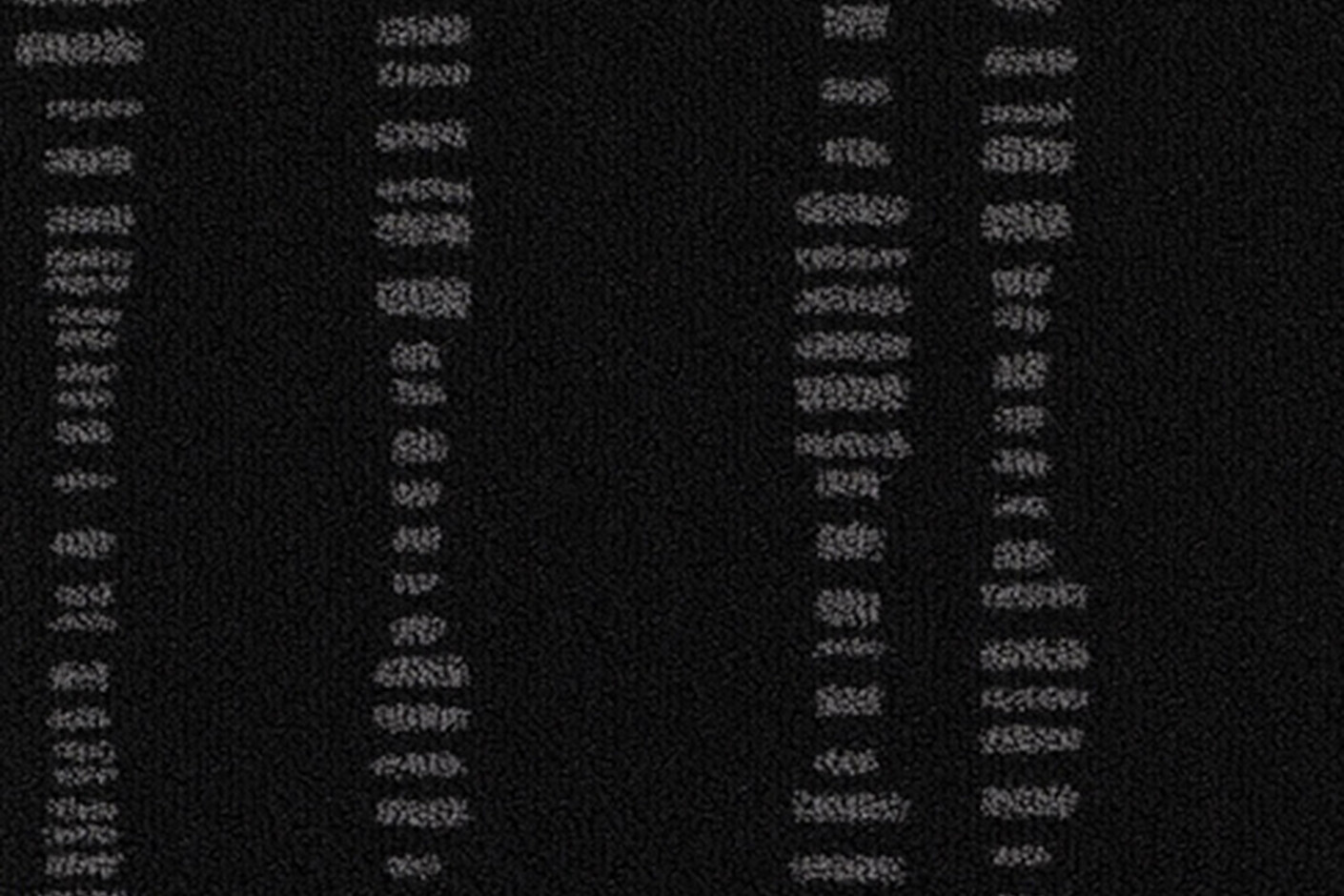 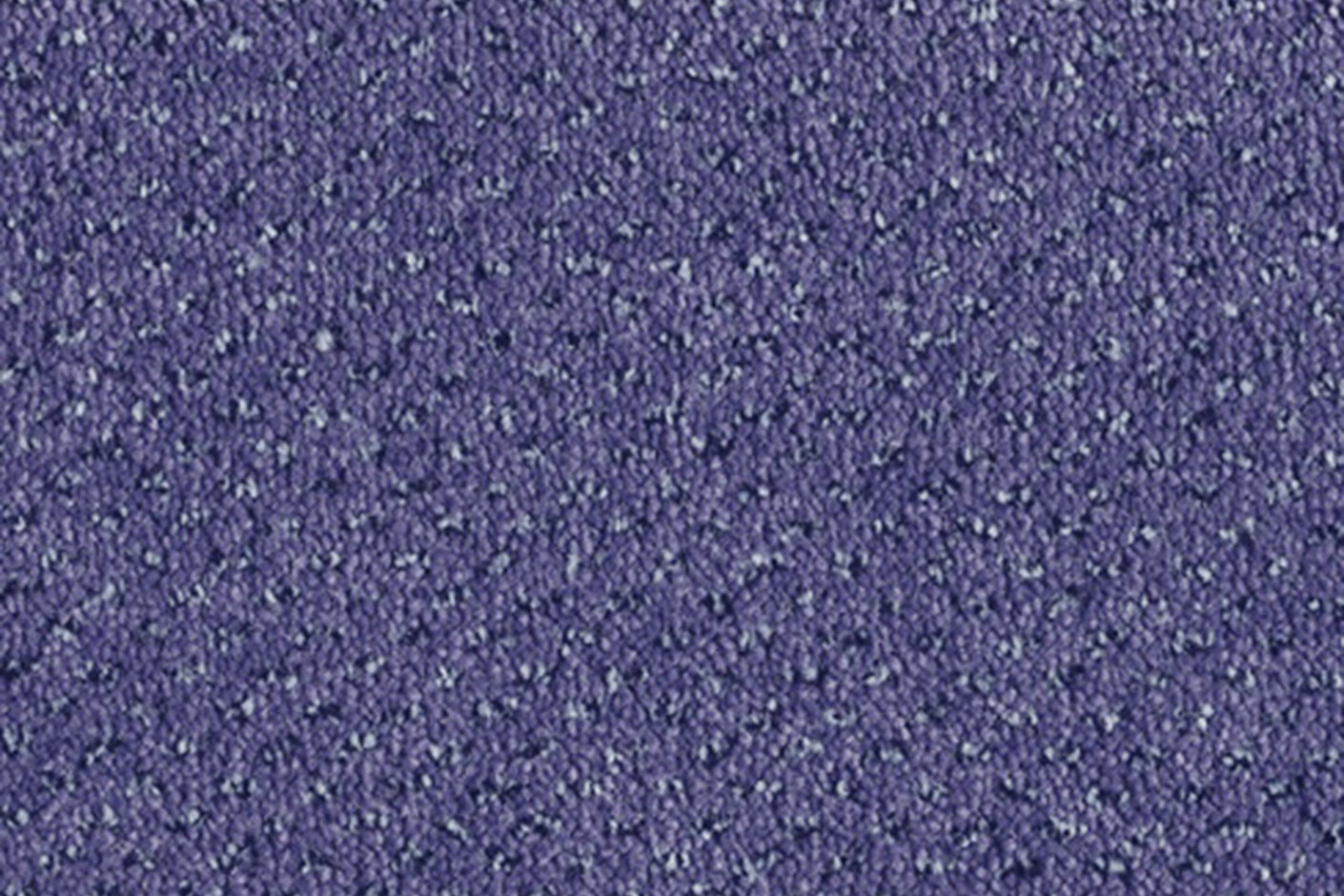 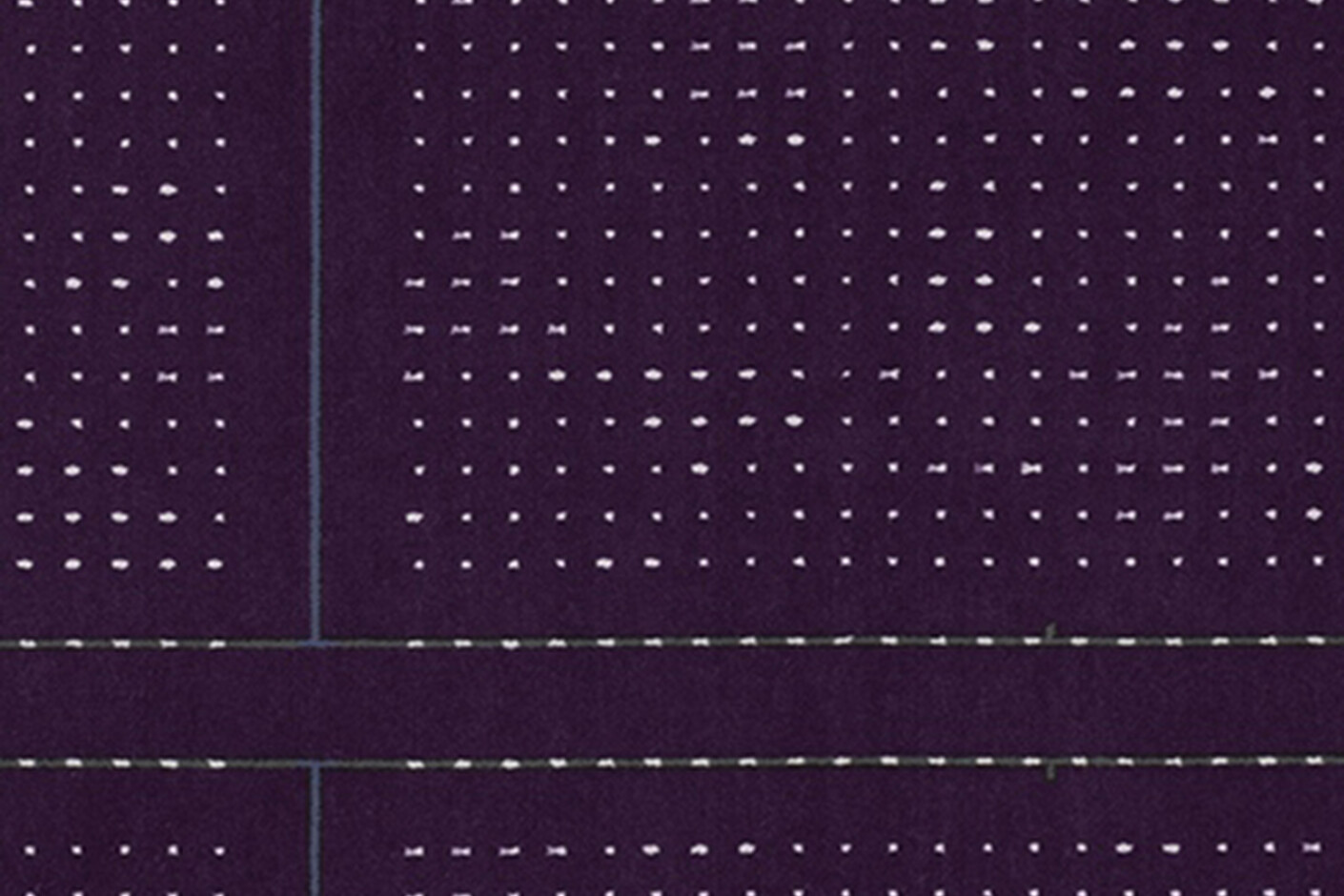 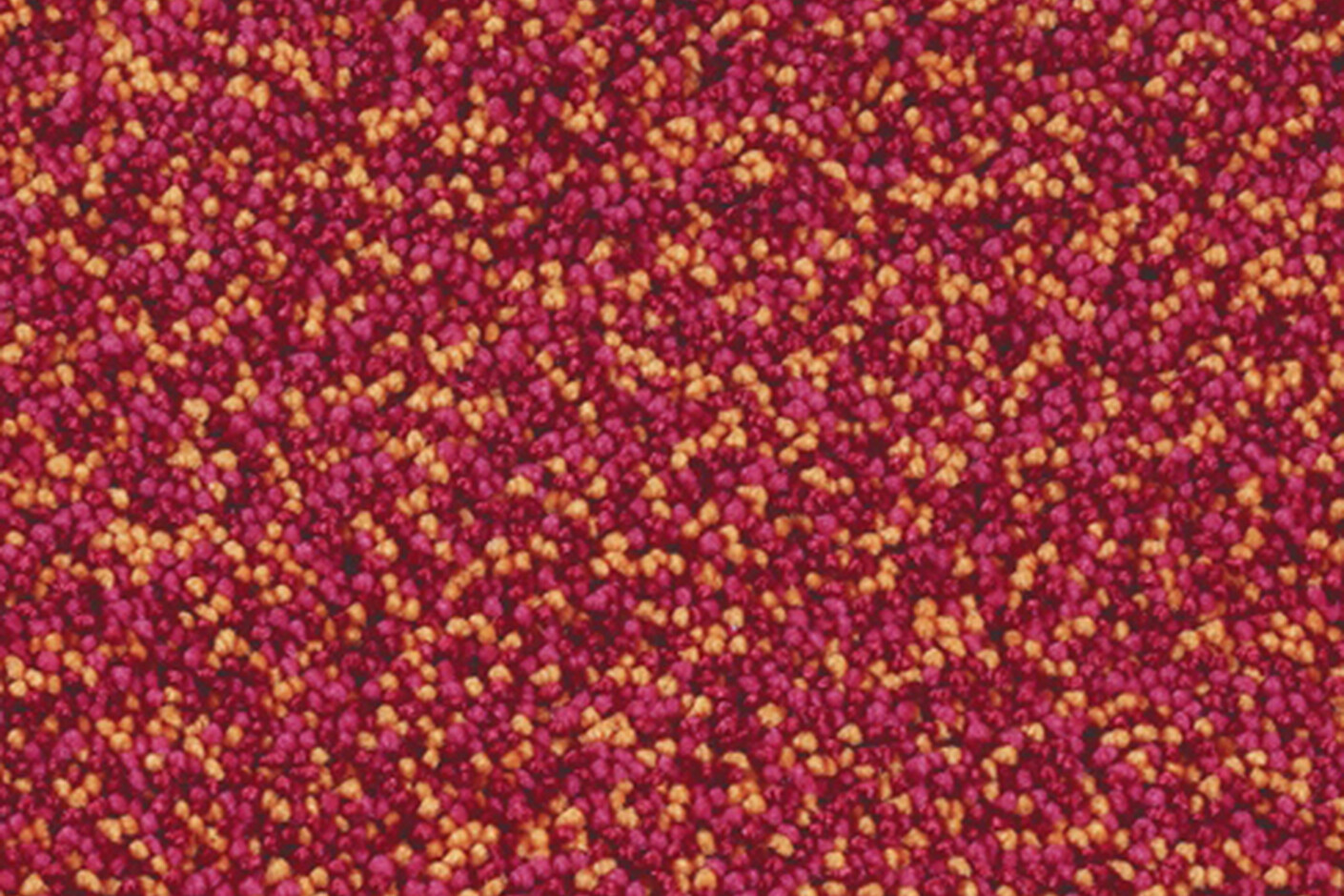 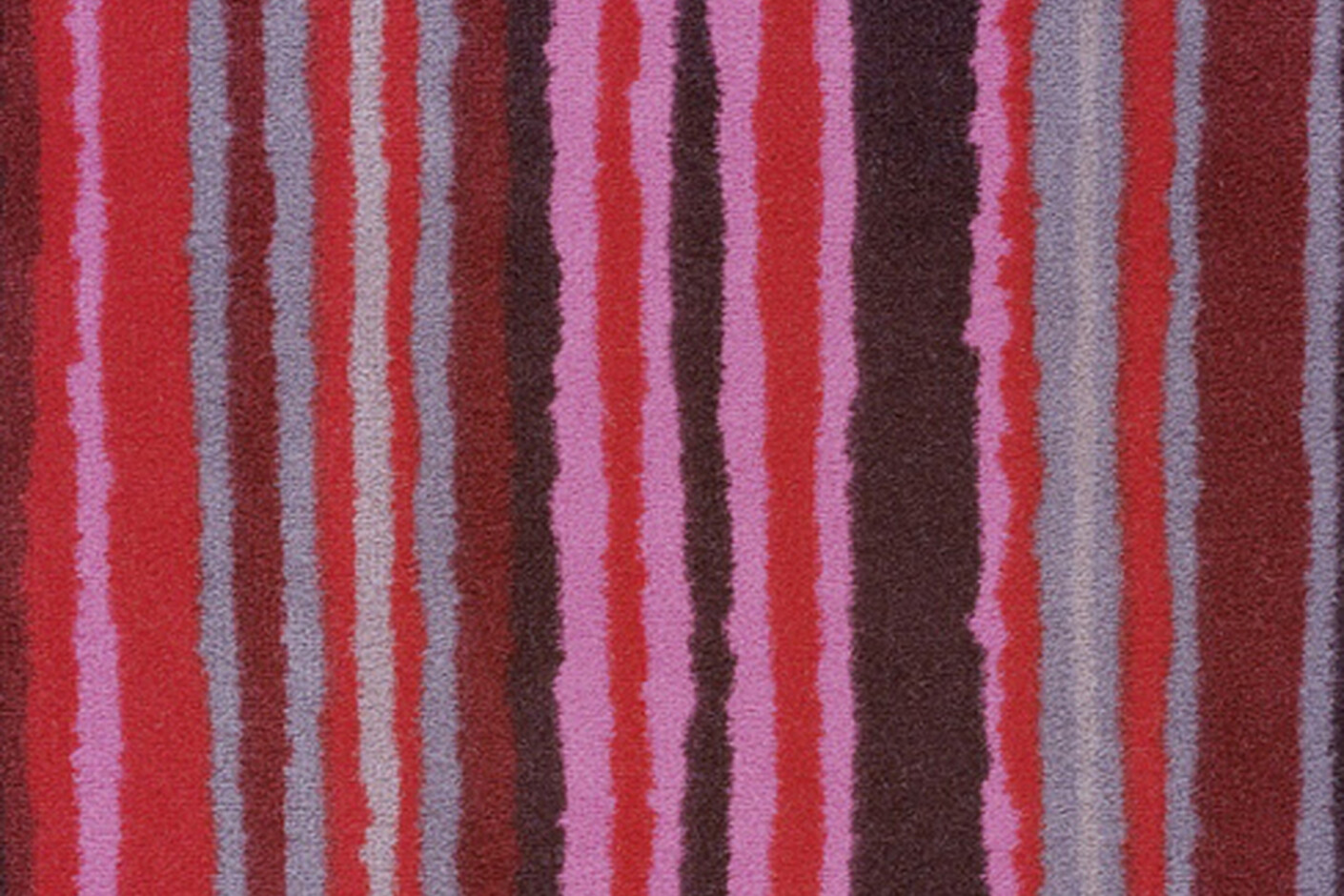