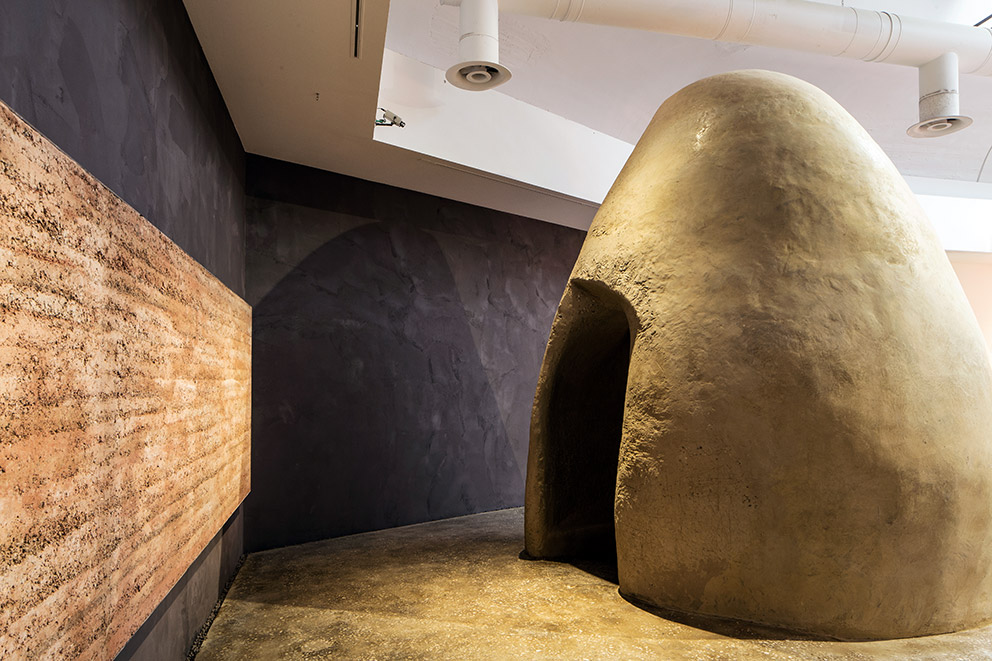 So what was not on show at the Biennale? Glass! If Alejandro Aravena sent out a black list along with the invitation to participate in “Reporting from the Front”, then glass evidently came right at the top of it. Together with plastic, metal and superstar architecture. Instead, clay, stones, bamboo wherever you look, and here and there a spot of concrete. This world of materials demonstrates just how much Aravena’s Biennale 2016 believes in local, hand-made and above all non-industrial architecture.

Back to the roots

Aravena and his team themselves lay the foundations for the major DIY construction exhibition: Using waste left behind by the 2015 Art Biennale they create the entrance areas to the Arsenale and the central pavilion; the walls have been clad in layer upon layer of bits of plasterboard, and from the ceiling hangs an entire sky of bent steel profiles. The waste of last year becomes the launch-pad for this year – they show us in a manner as aesthetic as it is instructive how our event-driven lifestyle simply burns resources. 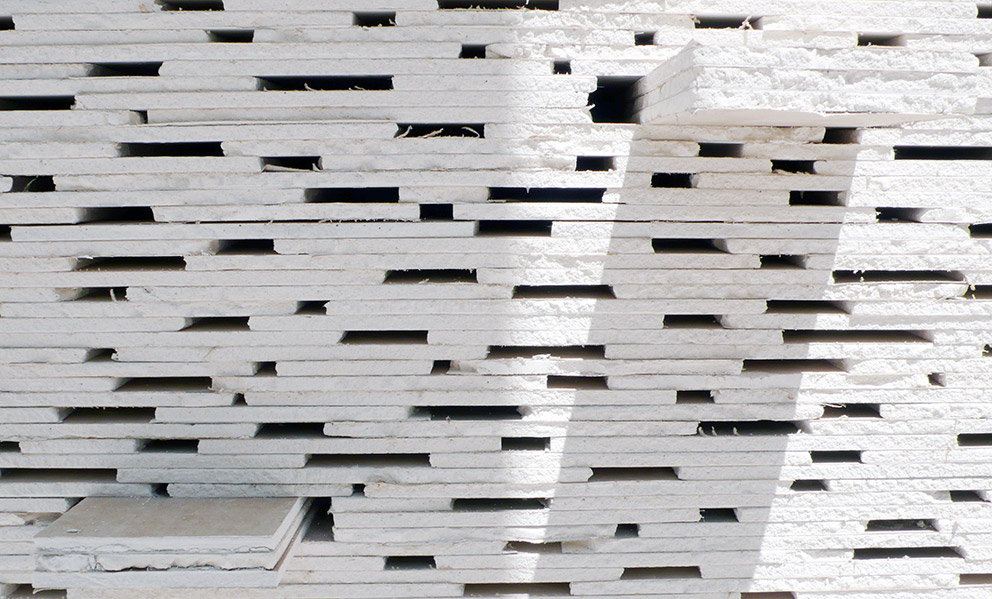 At the end, too much waste always remains behind: In the entrance spaces to the main exhibition at the Arsenale and in the Central Pavilion Aravena had fragments of plasterboard from last year’s Art Biennale stacked up. Photo © Jasmin Jouhar 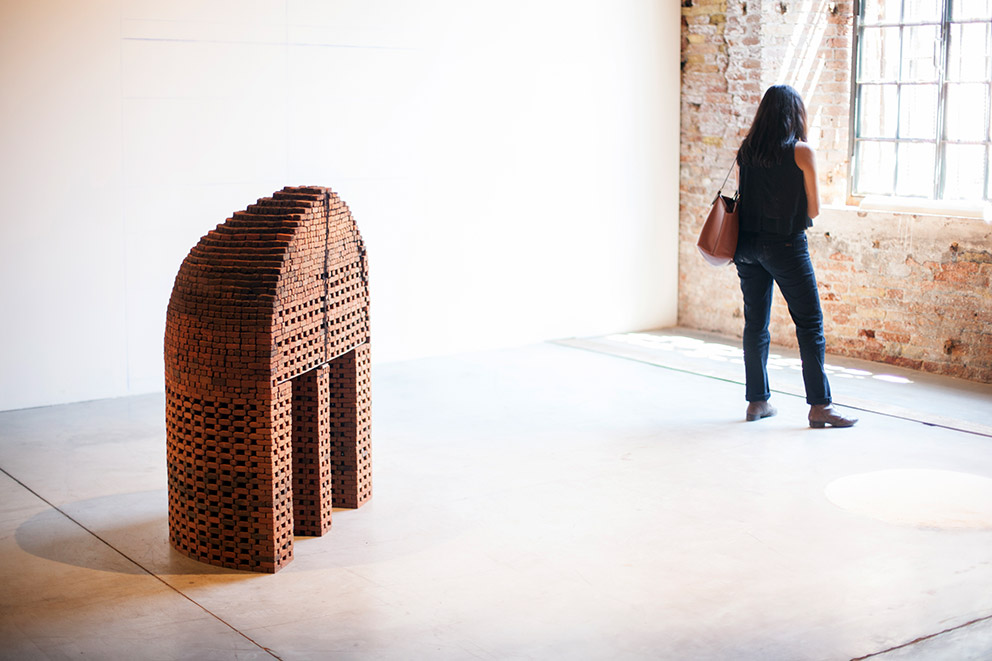 Meaning, back to the roots! But where do we find the roots? In the earth, of course. Clay is one of the oldest building materials and still the most frequently used the world over. Nevertheless, the modest material has doubtless rarely made such a splash as it does at this Architecture Biennale. Tamped clay walls, fired bricks, glazed tiles, pottery models: There’s so much clay on the front it seems as if the architects have only just noticed that the ideal construction material quite literally lies at their feet. And to a certain extent that is the case: “Over the last two hundred years, since the beginning of industrialization, we have ceased to develop clay as a construction material,” said Martin Rauch in a lecture during the early days of this year’s Biennale. “All the new things were always considered better things,” or so the Swiss clay construction experts and founder of “Lehm Ton Erde” stated – he also has a presentation in the Central Pavilion. In the course of the lecture, he made a brick live, which he held up at the end like a priest evoking the Host. Is this my body...? 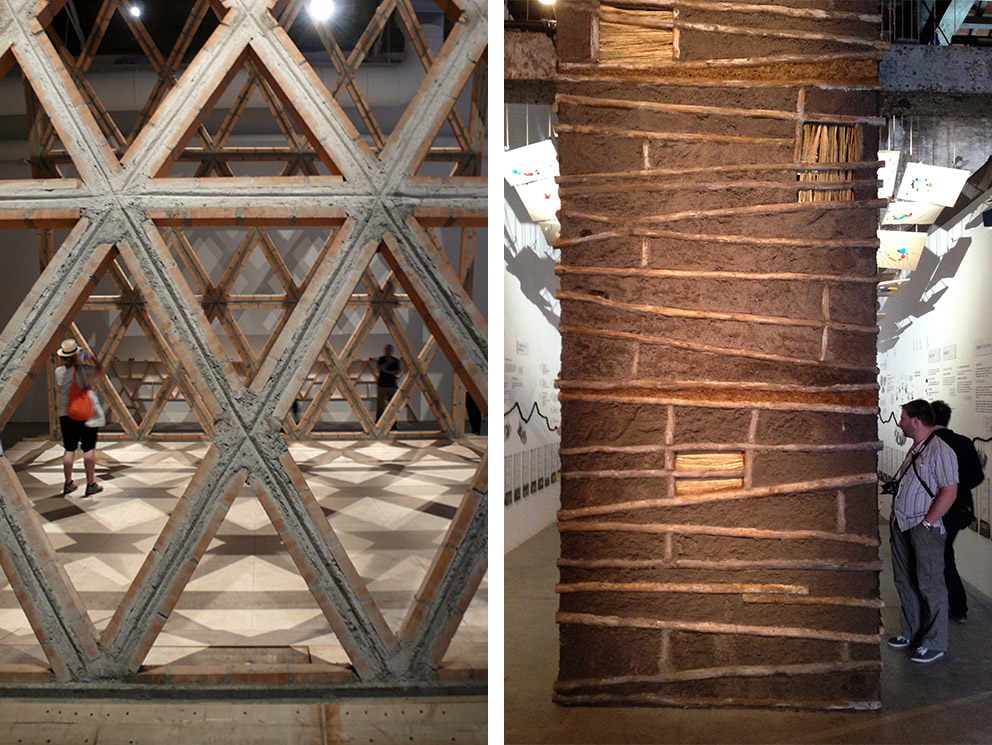 Simple, monumental and beautiful: This structure made of bricks and mortar by Gabinete de Arquitectura in the Main Pavilion (on the l.) won a Golden Lion. At the Arsenale there is a clay wall from the marvelous “50 Schools” project by South Africa’s Luyanda Mpahlwa. Photos © Jasmin Jouhar

Clay definitely has good properties. It is cheap, durable, good for the ambient climate and (if not fired) as good as carbon-neutral. You don’t need high-tech to work clay. Architects like Francis Kéré, Anupama Kundoo or Anna Heringer have proved how meaningfully it can be used as a building material specifically in remote areas – their works are also included in the main exhibition. Moreover, Wang Shu’s Amateur Architecture Studio presents local brick building traditions in China, Studio Mumbai (as in 2014) displays small material models of their architectural approach, relying on traditional materials and artisanal techniques. In the Central Pavilion David Chipperfield showcases the Visitor Center for an archaeological site in South Sudan that he had built from tamped clay walls. The tip of the clay-berg is to be found, however, in the second large hall in the Central Pavilion where the Paraguayans from Gabinete de Arquitectura have assembled one of their marvelously fragile seeming structures using simple brickwork – and won the Golden Lion for their efforts. Clay is very clearly the superstar in Aravena’s exhibition. 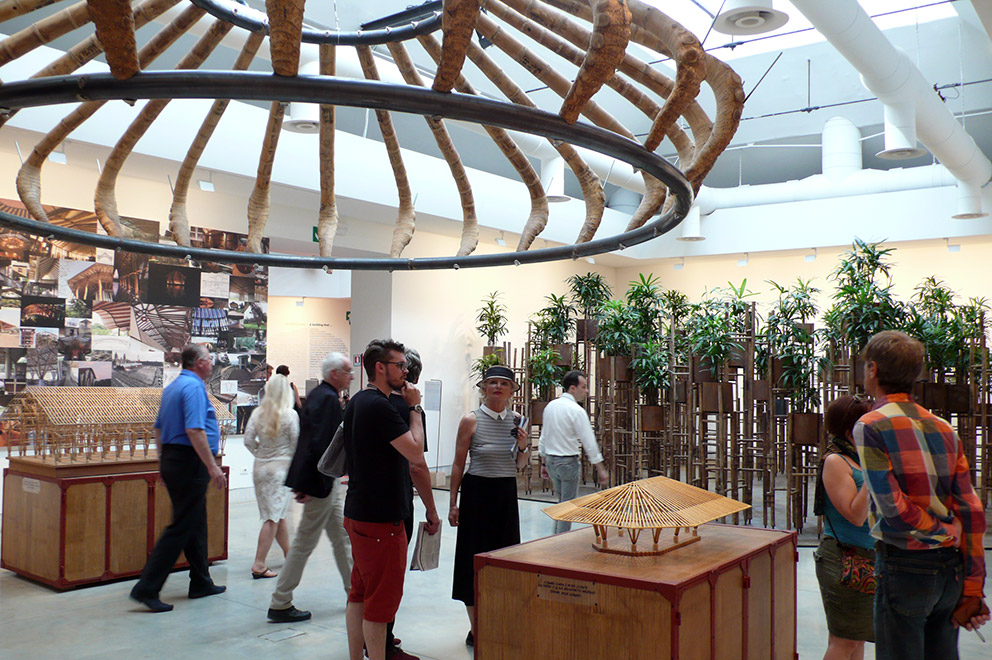 A space you can smell: Bamboo structures by Simón Vélez from Colombia and by Vo Trongh Nghia from Vietnam. Photo © Jasmin Jouhar

Plant-based and likewise politically correct building materials such as bamboo, wood or straw therefore only took second place behind clay. But they were ahead of recycled materials – in this context, worthy of note in particular is the study by Hugon Kowalski and Marcin Szczelina from Poland, who have investigated the Mumbai waste cycle and have compiled “A Brief History of Garbage”. Natural stone or concrete likewise put in a due appearance, above all in experimental contexts, such as the vaults designed by the Block Research Group at the ETH Zürich and the ensemble of archaic objects in a barren landscape. Exceptions confirm the rule: For example, the striking pavilion made of precast concrete elements by Belgium’s “Organization for Permanent Modernity”, the outtake on a market hall in an immigrant quarter in Anderlecht. Or Portuguese Samuel Gonçalves’s project of building prefab houses using concrete drainage conduits.

At the end of the tour of the main exhibition you’ll find your fingertips are really dry from having touched so many rough, open-pore, dusty surfaces. And you’ll remember the smells: Rural Urban Framework’s felt yurt smells of sheep and stables, while the bamboo in the Central Pavilion smells woody and moist. In fact, the entire Biennale is pretty much a hands-on affair: Many of the presentations rely on models, on specimen materials, on ready-mades and on life-size sections of real buildings. Only rarely will you find yourself facing detailed plans or analyses. 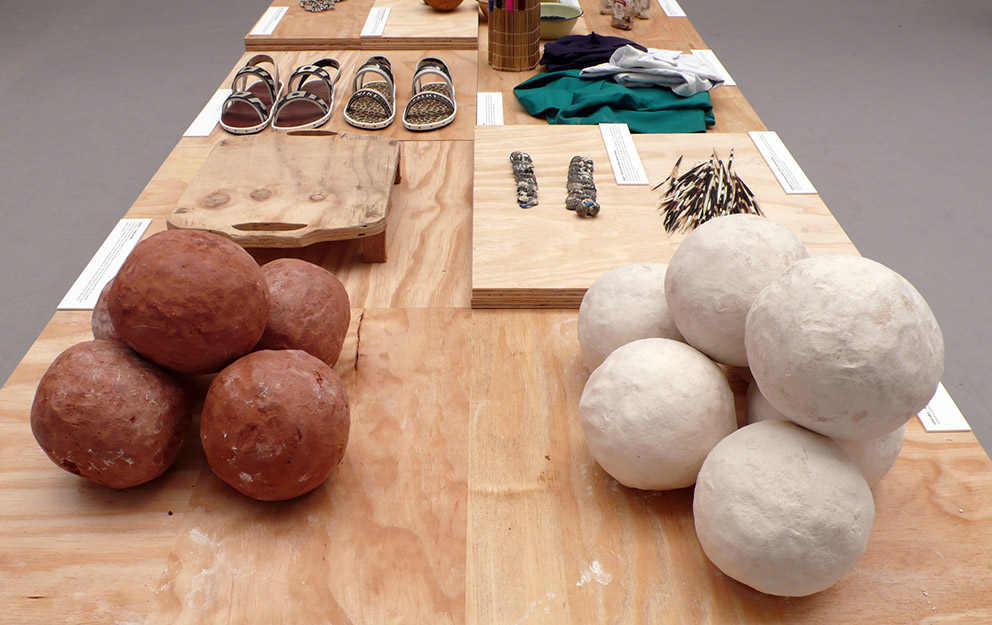 Many of the tables at this year’s Biennale offer specimen materials and strange found objects that were hard to distinguish from one another: Installation by designworkshop:sa with red and white clay balls. Photo © Jasmin Jouhar

A question of size

One question does, however, go unanswered: Do all these local, sustainable approaches suffice to satisfy the incredible need for homes and housing? Many of the exhibited projects are essentially small in scale, are located in rural or at best suburban spaces. But what about the cities: How can be construct large housing estates, denser downtowns, let alone high-rises? Using tamped clay? This is why the installation entitled “Neubau” by Cologne’s BeL Architekten is so refreshing: a model railway landscape made of gleaming blue ecologically dubious hard foam. It is the material antithesis that nonchalantly champions a large scale, because only in that way can sufficient housing be created in a short period of time. Alejandro Aravena and his team have highlighted many noteworthy approaches and projects that we did not to date have on our screens here in Central Europe. But this Biennale does not answer the question how sustainable, socially acceptable building can be adapted to the massive number of units required. 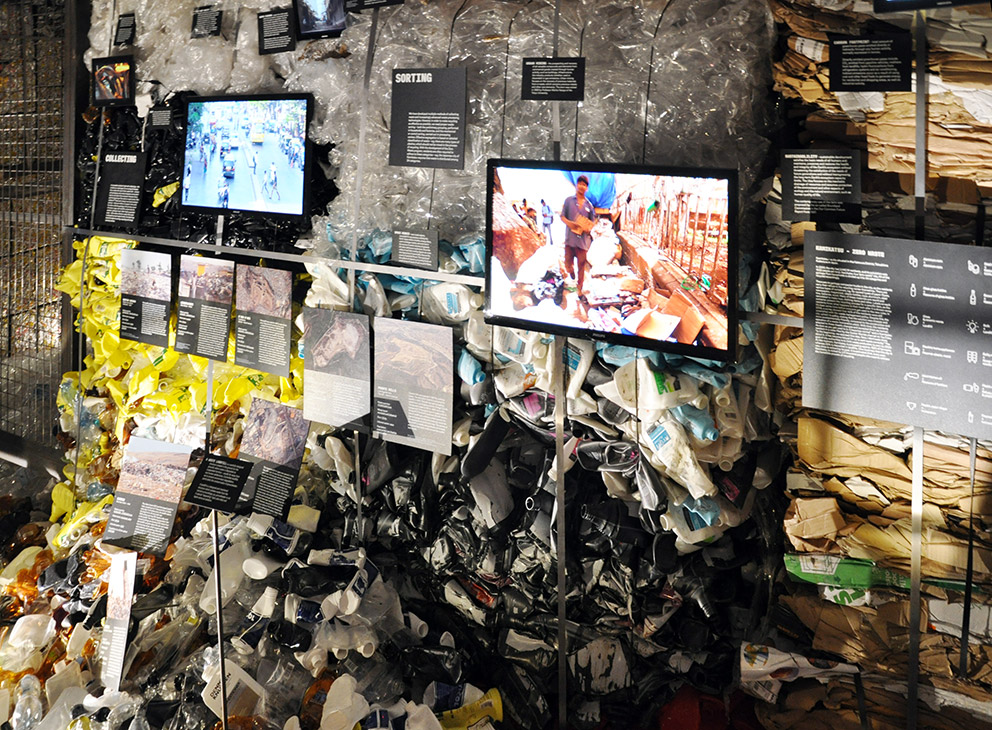 Hugon Kowalski and Marcin Szczelina from Poland present one of the few pieces that focus on plastic waste and recycling it: “Let’s Talk About Garbage”.
Photo © Robert Volhard, Stylepark 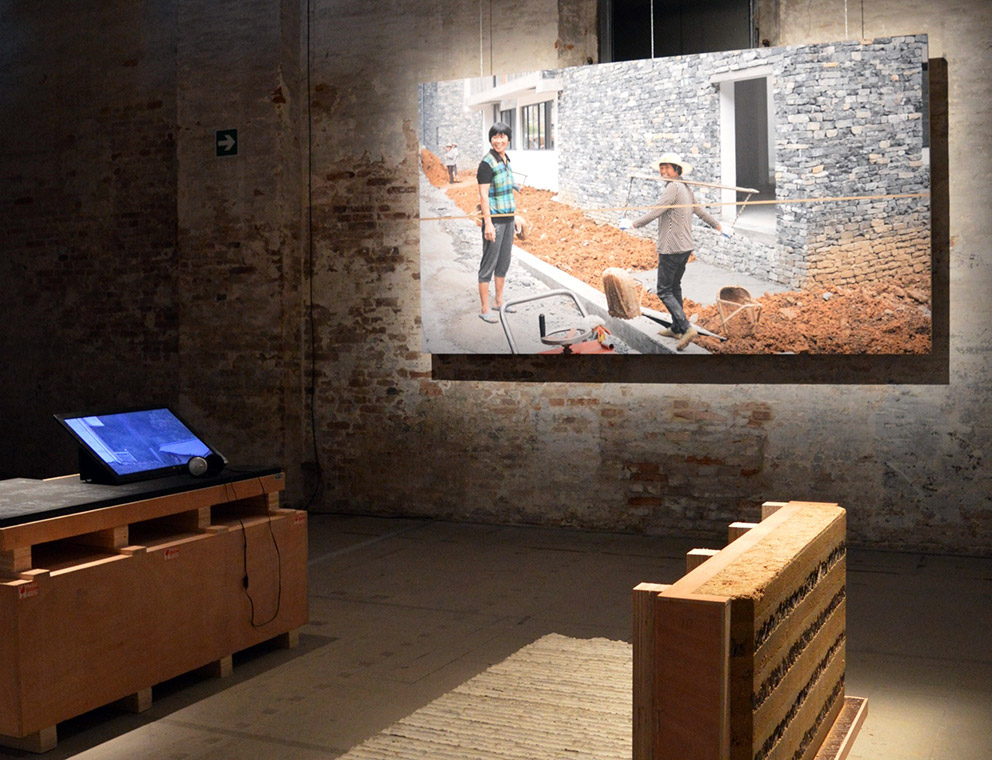 Clay, stone, bamboo and much more besides: The Amateur Architecture Studio presents its work using photographs and sample materials laid out on the floor.
Photo © Thomas Wagner, Stylepark 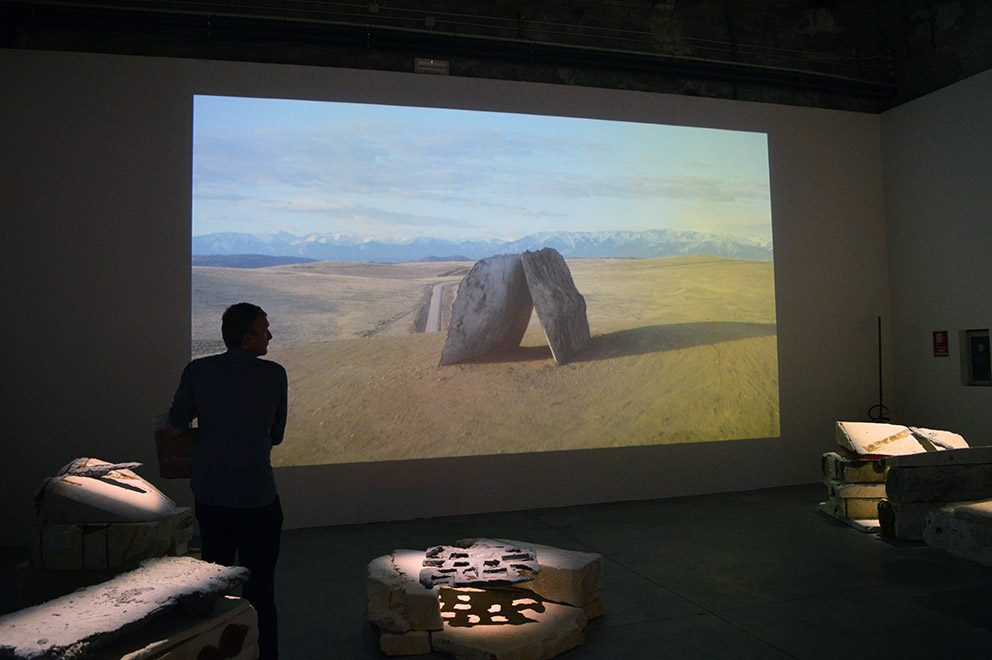 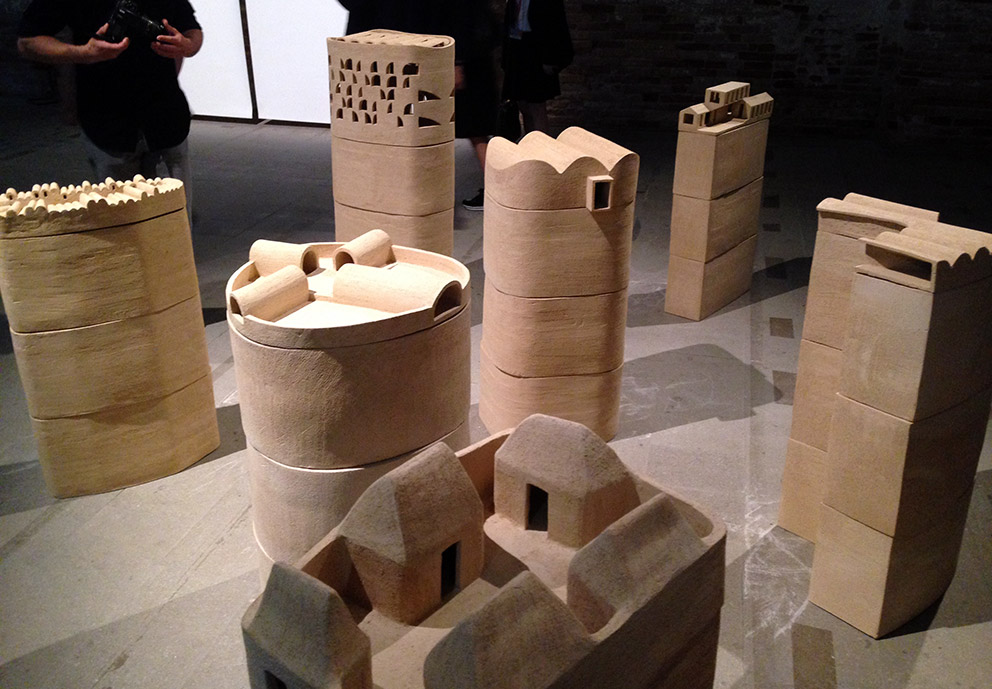 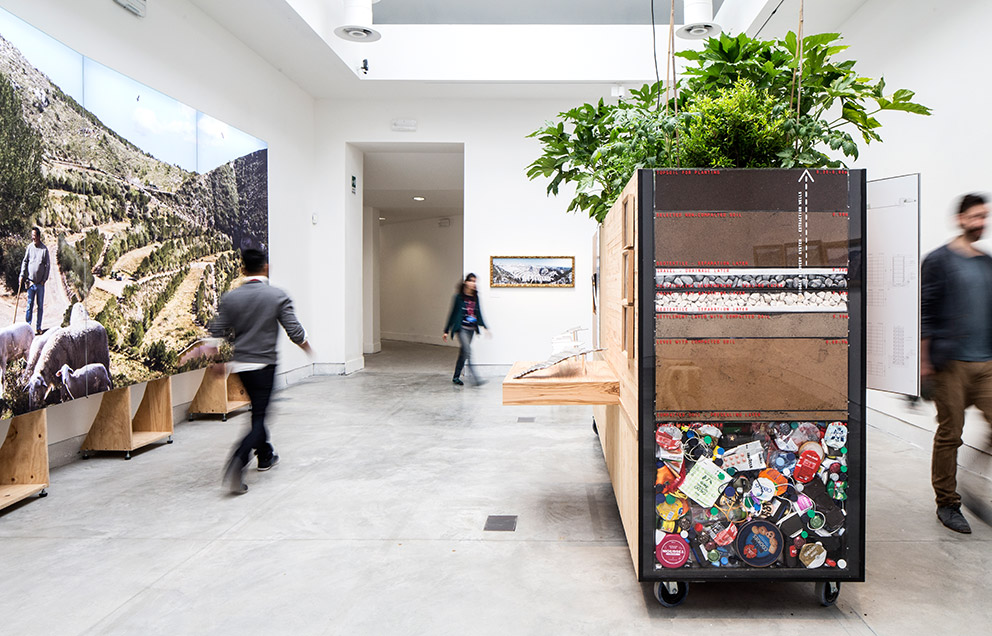 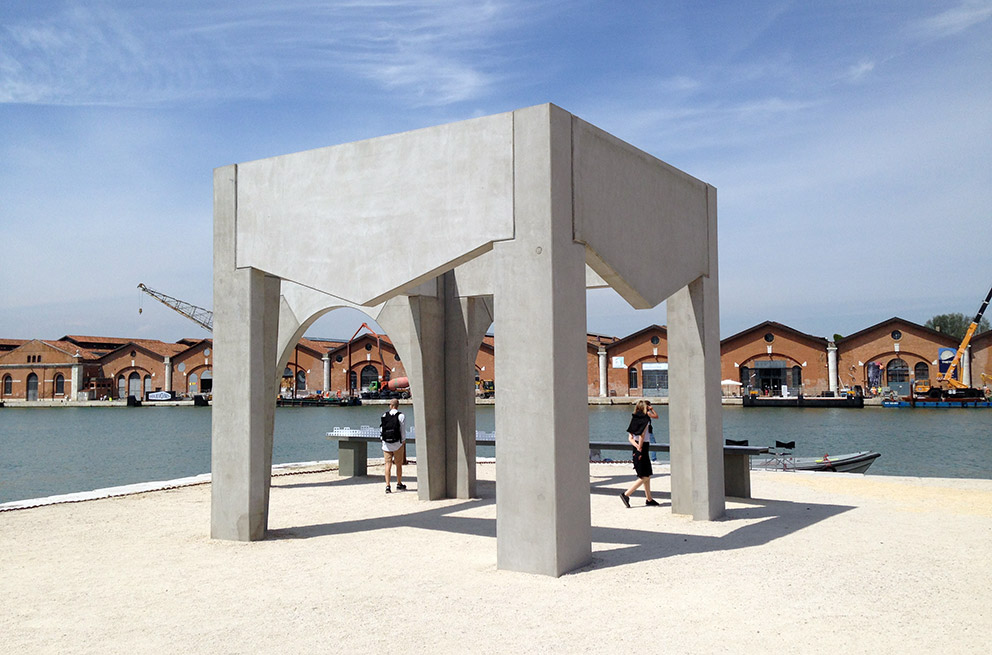 One of the very few concrete structures is to be found in the Arsenale’s outdoor section: The Organisation for Permanen Modernity relocated part of its Anderlecht “Migrants’ Market” to Venice. Photo © Jasmin Jouhar
Advertisement