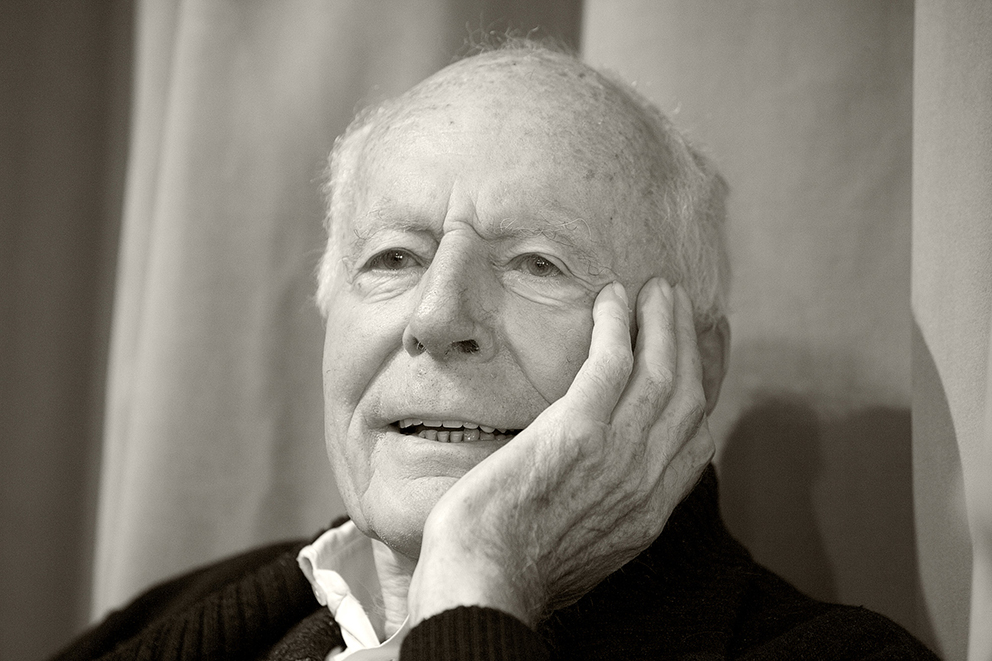 My first encounter with Gottfried Böhm was in my early days as a student at RWTH Aachen University. There was this big model up in the Reiff (the Reiff Museum, our Architecture Faculty): A square section of the city of Cologne in black wax, protected beneath a Perspex cover. And because the model was always a little in the way, we stood our coffee mugs on it, spread out our sketches and leaned against it when exhausted from studying. I no longer remember whether we talked about the model. Probably not, otherwise I might have taken notice of it. At that time, back in 1992, Gottfried Böhm, the first German winner of the Pritzker Prize, had been officially retired as professor for seven years. The Chair of Craft/Material Studies he had held had since passed to Volkwin Marg, who expanded it to include Urban Planning and directed our gaze to the future.

Naturally, we became acquainted with the buildings by the Böhm family during our studies: St. Engelbert in Riehl by his father Dominikus, Neviges, Bensberg and St. Gertrude by the Gottfried. They remained milestones of their respective day, but it all somehow seemed passé to us. After all they were real heavyweights, like mountains from the outside and caves inside. No matter how modern the design once was, the material nonetheless ungraciously showed signs of aging and the author behind it. We yearned for the new, colourful and synthetic, minor excitements and virtual inducements. Which meant they whom we so admired then are those whose folds, shards and dogmatic use of raster bore us today.

It took a while before the analogue became appealing once again and I was busy in the cyber heaven of The Bartlett realizing a graduation project with ink and charcoal, wax and plaster, with black-and-white photos and needles and threads. Today, when I look at the early religious buildings by Gottfried Böhm, it is precisely the sculpted craftsmanship that fascinates me – because it makes these works so unique. I’d most like to touch the buildings, sit there in a small niche, and run my hand over the coarse concrete. Perhaps it was good that the father left the son with no alternative but to become his partner and successor, to continue writing Böhm architecture history. And Dominikus was farsighted enough not to stop the young Gottfried from sculpting, and instead let him practice it alongside architecture, and also turn it into an instrument of sorts. After all, it was only in this manner that designs were created by Gottfried Böhm’s hands both on a small and large scale that no architect would ever have conceived. Happy Birthday Gottfried Böhm!

Gottfried Böhm’s oeuvre is immense and even at 95 work still has a firm hold on him. For all those who would like on the occasion of his birthday to take a short journey in time through Cologne, I have selected five very special architectural aspects. 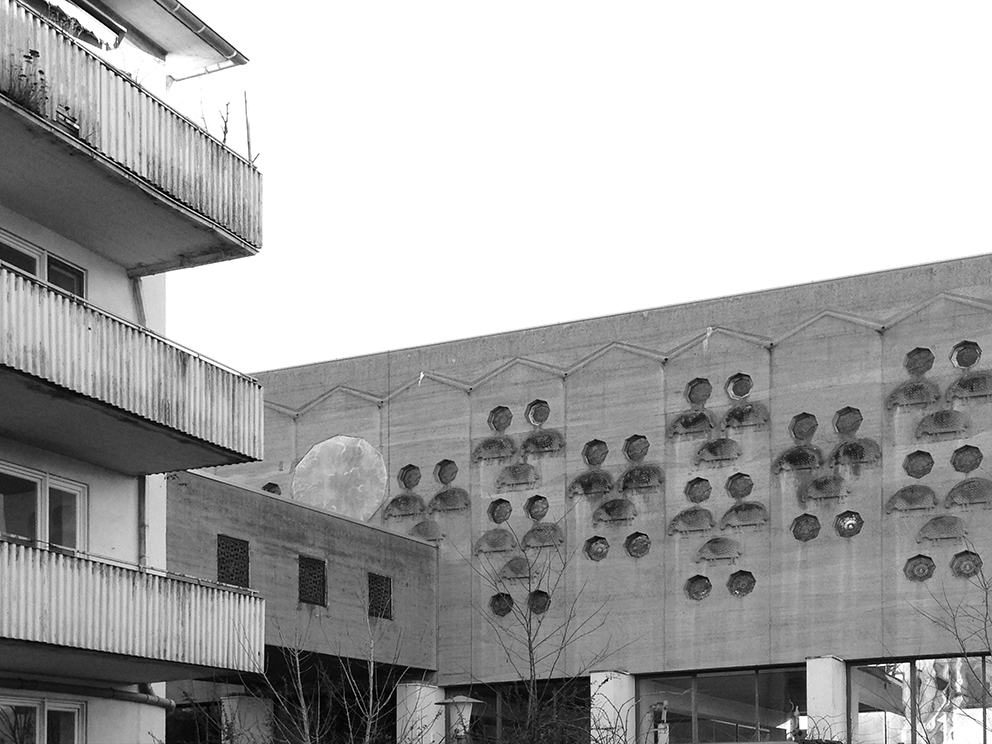 St. Columba was the largest and most important parish in the medieval town of Cologne, but nobody had ever considered rebuilding the late Gothic church, which air raids in 1945 reduced to its enclosing walls and a stump of a spire. In the middle of the rubble, a late-medieval limestone Madonna had survived the bombs and fires unscathed. She was to become a symbol of hope, the place itself to be become a memorial preserved in its state of destruction. Josef Geller, priest of the Columba parish, championed the church being rebuilt on the original site and initially approached Rudolf Schwarz, and then Dominikus Böhm in his search for a contemporary architectural solution. Böhm passed on the task to his son Gottfried, who in 1947 presented the first plans for the construction of a Chapel to Our Lady in the ruins. He proposed having a large new church above it, which would integrate the remains of the old church, but his plan was rejected and the Madonna was removed for conservation work. Finally in 1948 Böhm was awarded the contract and after several revisions the chapel (his first building) was consecrated in December 1950. Böhm placed the entrance and anteroom in the fragments of the spire and added a small octagonal chancel with a pyramid roof in the east that would accommodate an altar and the statue of the Madonna. The textile-and-concrete ceiling Böhm developed lent the delicate concrete structure a modern, tent-like appearance. Initially the windows of the chancel were in plain glass and looked out onto the rubble remains. Then in 1954 Ludwig Gies’ stained-glass windows portraying angels playing music were inserted. In 1957, a Chapel of the Sacrament designed by Böhm was added; its dark, heavy mood seems to contradict the architect’s original intentions. Retaining the entrance the chapel, one of the most important places of worship in Cologne, was integrated into the Columba Art Museum of the Archdiocese of Cologne in 2007.

>> Don't miss our review of the movie "The Böhms". 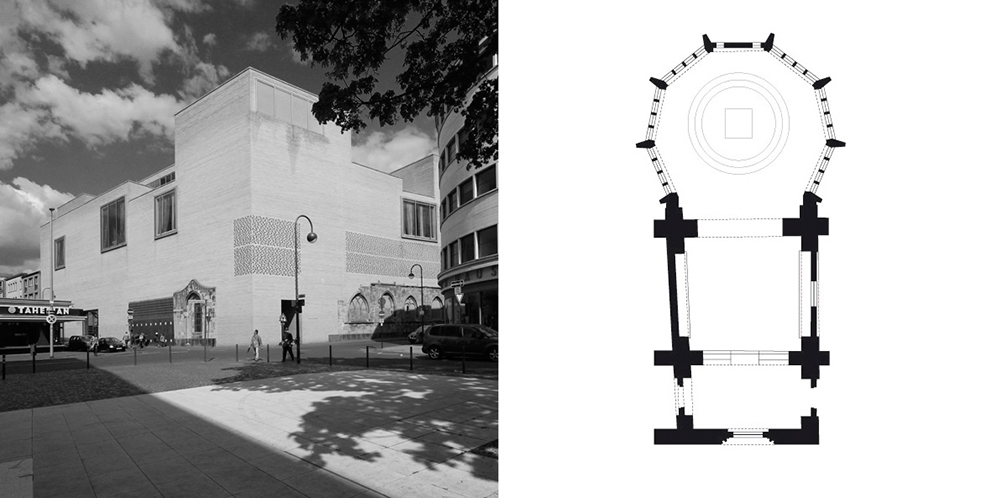 Madonna in the Ruins converted and overbuilt by Peter Zumthor Kolumba Museum. Floor plan showe the state in 1949. Photo and Drawing © Uta Winterhager

Gottfried Böhm, who after the death of his father stepped into the contract to build the Waisenhauskirche (which other than its spire had been destroyed by bombing raids), set out to build a “church for children with a lot of light and cheerful symbols”. This early work is not one of his typical ones, although it is not at loggerheads with his oeuvre per se. The church nave is simply a square; the spire at the head is suspended over glazed foundations supported only by delicate masonry walls. From the smooth concrete facade, whose red color stems from the use of the old church tiles as an aggregate, the relief of the good shepherd and his herd rise up visible from all sides: 126 lambs and a sheepdog together with an equal number of small octagonal windows form a well-composed image. Above this a zigzag line is formed by the folded-plate ceiling, gives a suggestion of sky. The free-standing altar open to all sides is sited below a baldachin. It is surrounded by a host of children singing and playing music, who are depicted in the small windows, and once invited the orphanage children to celebrate with them. This church is characterized by simple images lacking in kitsch and a clear space. 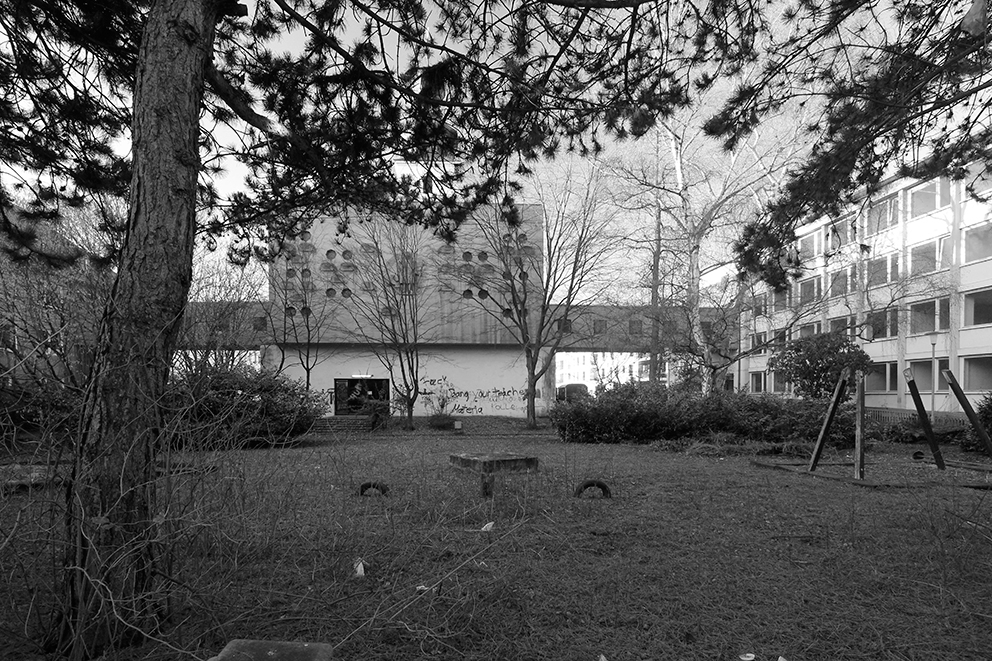 The children have left, the Church of the Good Shepherd remains. Monastery of the Holy Family by Gottfried Böhm. Photo © Uta Winterhager

The trees have swallowed up the narrow tower and the nave, a flat square, is so earthed that is does not even need an entry level. With its play of light and shadow the folded ceiling becomes a firmament. The superstructure separated from the base by a surprisingly colorful strip of windows reinforced by wrought iron, appears to hover, because the space is free of supports and almost impossibly spacious: a marquee ready for the Eucharist. All interior fittings are squeezed out towards the edge but they do not touch walls and ceilings. The low block with sacristy, pieta and organ resembles a house within a house, its counterpart, the cylindrical confessionals and the holy water found at the rear in the central axis, carefully balance out the symmetry. The choir resembles a rockery from whose highest level a baldachin rises up, which leans protectively over the altar like a tree. To the left, the ambo pushes forwards, on the right stairs lead down to the tabernacle. Despite this wealth of images the church space remains calm and wide, inviting you to walk around and look or to let your thoughts roam. 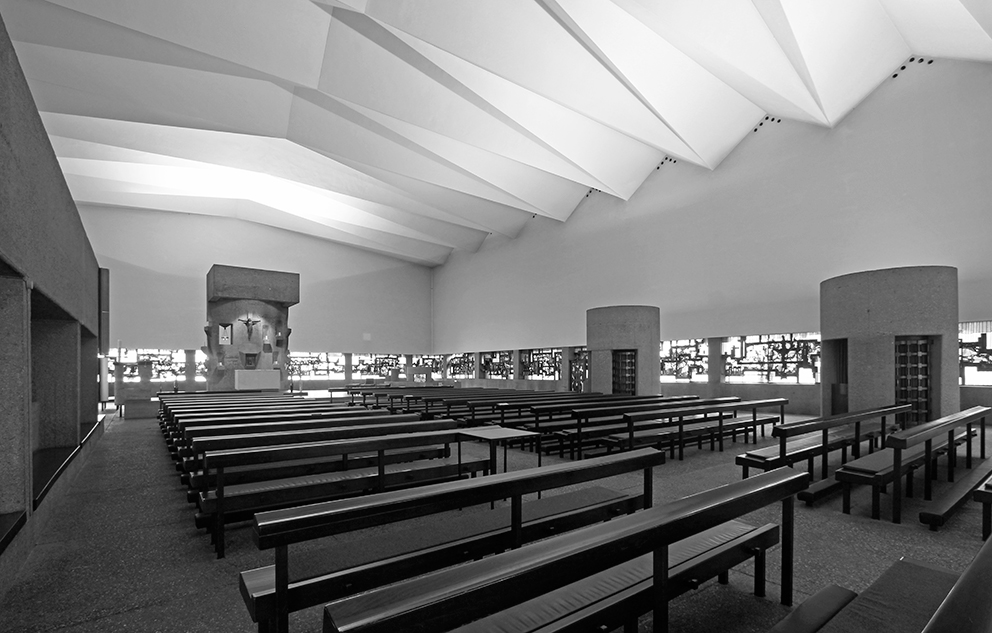 A monolithic mass forms the foundations of St. Gertrude Church, which itself resembles a fortress. Roof and walls were conceived as one, and the concrete surface is unrendered, unadorned and rough, inside and outside, a material, not a facade. Here, Böhm has clearly formulated his architectural idiom, prior to the Neviges and Bensberg buildings. In building the church and parish center he closed a gap, placed a concrete sculpture in the row of upright houses, cited old burgher houses by splitting the facade into three pointed chapels, and highlights the church’s presence with the height of the thin tower. There is a small place here, an inviting gesture. But he makes the design – two interlocking and expanded pentangles – impossible to interpret. It remains a hollow, which is sparsely lit and set at a level another four steps down, a little eerie at first but it soon appears intimate. St. Gertrude has lost its parish, since 1991 it has belonged to St. Agnes and has been used for cultural purposes since. In 1967 it won the Cologne Architecture Prize.

Colored window in a room that does not wear jewelry. University Hospital of St. John the Baptist in Cologne Lindenthal by Gottfried Böhm. Photo © Uta Winterhager

What a divine bastion this is! The way it sits in state at the head of the Clarenbach canal. It is no small achievement to find a location like this in Cologne. The previous building was destroyed in the war and only inadequately rebuilt. Böhm’s task was to create something enduring with sufficient mass to survive the test of time. This church is a veritable fortress of concrete and tiles, the components compressed tightly together refusing to follow any symmetry or appellation and forming an organism, a whole. The image of God’s vineyard is also fitting, the belfry the vineyard around which the stairs wind like a vine. Inside, well protected by the heavy doors there is this cavern once again like the one in St. Gertrud. But for this building Böhm went one step further: He shows a support structure, but he does not allow us to understand where the forces are leading to. It seems to be solid, hewn into the rock as are the niches for the confessionals, the chapel with the pieta, the organ, the tabernacle and the small place in the rear wall for sitting. The narrow column of the tabernacle towers upwards and crowned by the Lamb of God seems to point further upwards. After all, this is where on a ledge on the wall many meters above the altar the Jesus the Crucified is hung on the bare brick wall. Even though it is illuminated by a spotlight you almost have to search for the figure from the Baroque. But sunlight repeatedly shines through the ceiling, irritates and tells of the outside. After all, the windows are blind. Admittedly, they allow light into the body of the church, but they are to be seen as pictures. Abstract works of art by Böhm himself, who created images from the names of Maria, John XXIII and Martin Luther King using nails, brass pins and red synthetic resin. Böhm lets us search and believe here. You could not design a church better.

Many thanks to koelnarchitektur.de for sharing this article. 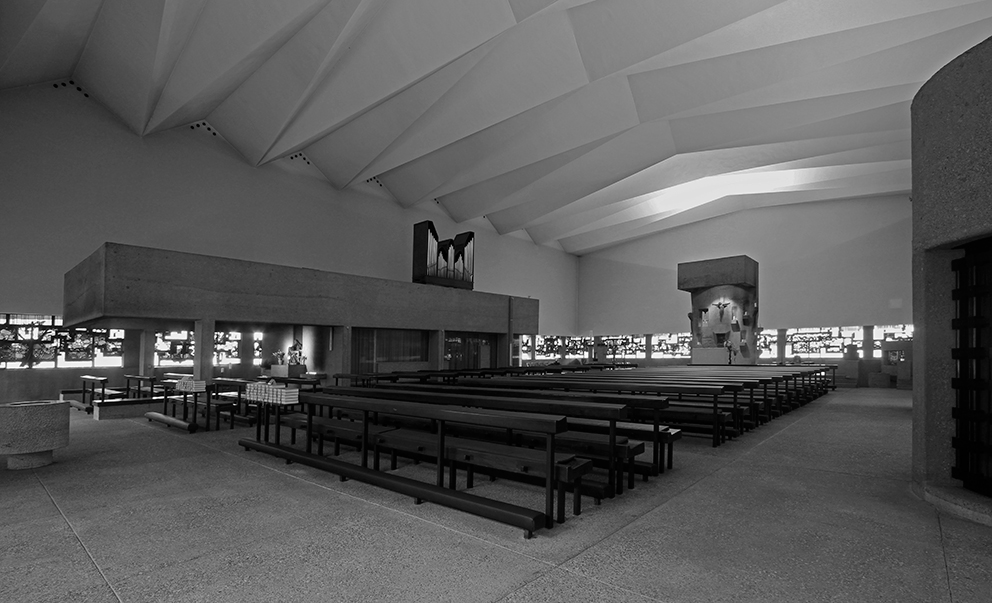 The low block with sacristy, pieta and organ resembles a house within a house, its counterpart, the cylindrical confessionals and the holy water found at the rear in the central axis, carefully balance out the symmetry. Photo © Uta Winterhager 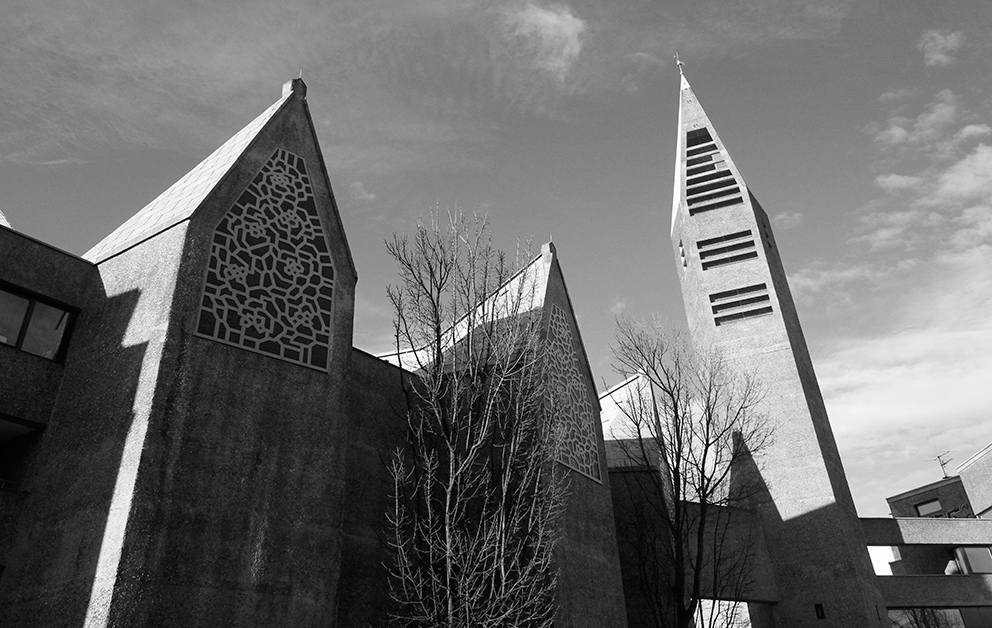 Like a rock in the vacant lot: St. Gertrude by Gottfried Böhm. Photo © Uta Winterhager 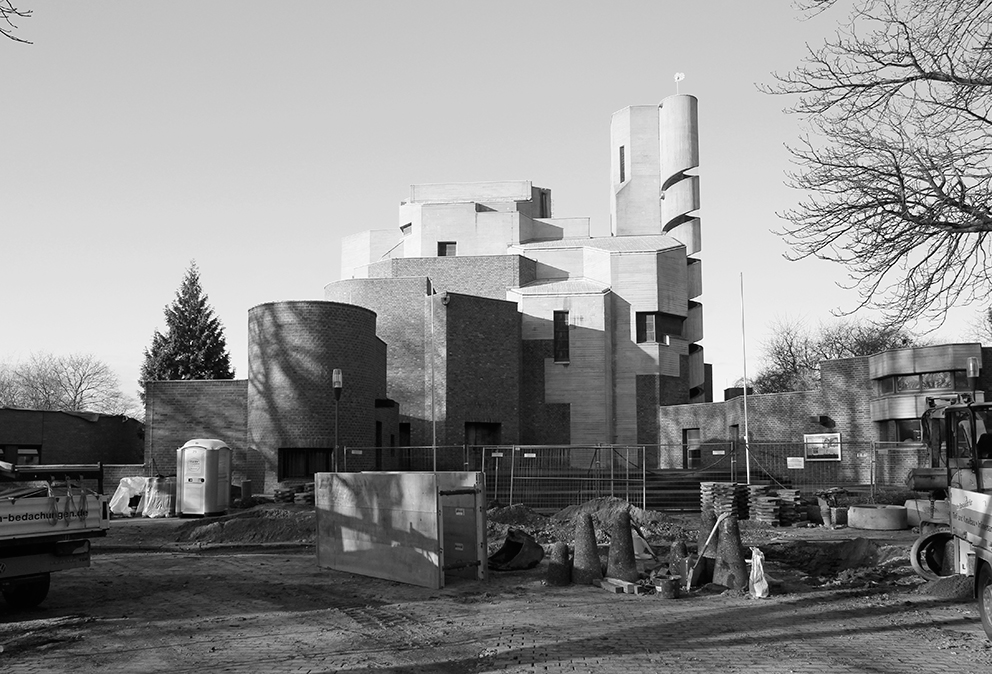 Church of the Resurrection by Gottfried Böhm. Photo © Uta Winterhager 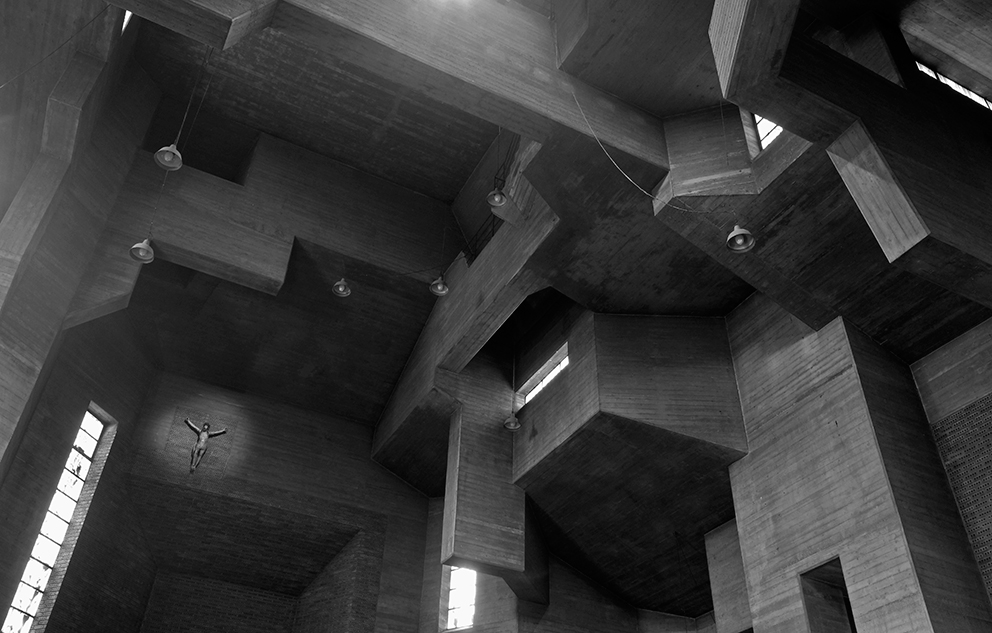 This church is a veritable fortress of concrete and tiles. Photo © Uta Winterhager 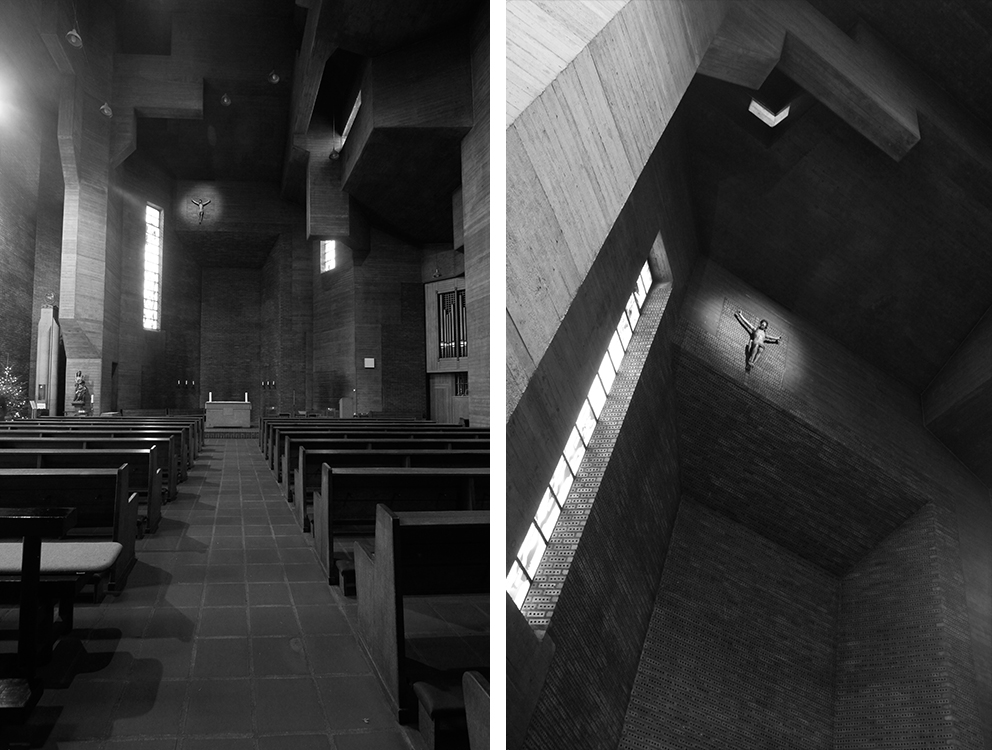 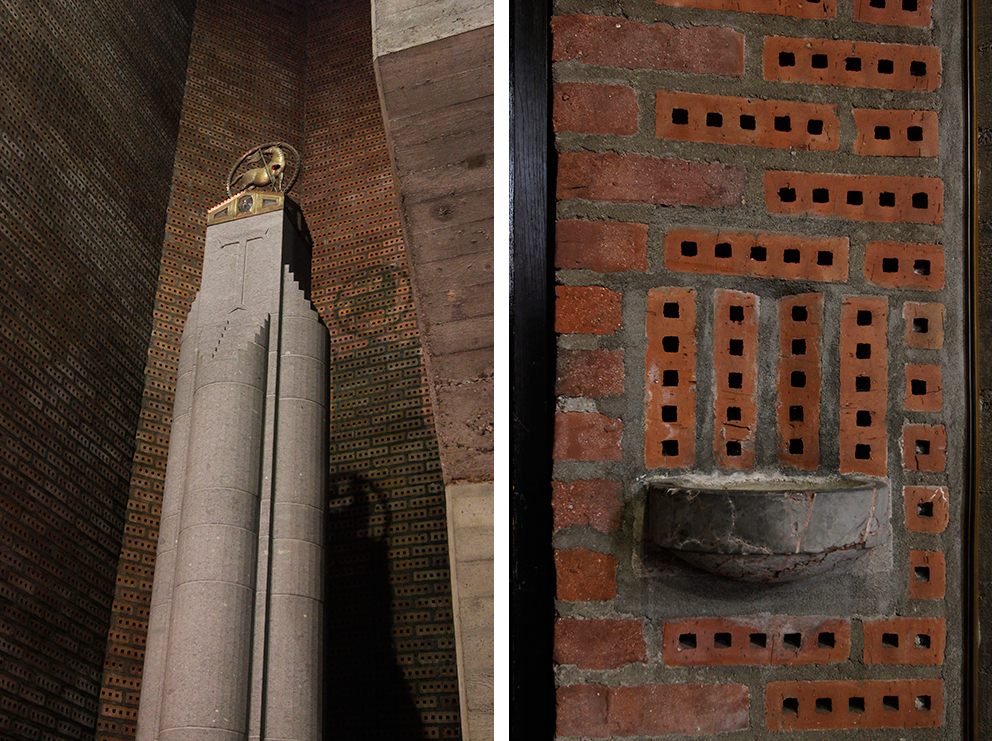 The narrow column of the tabernacle towers upwards and crowned by the Lamb of God seems to point further upwards. Photos © Uta Winterhager 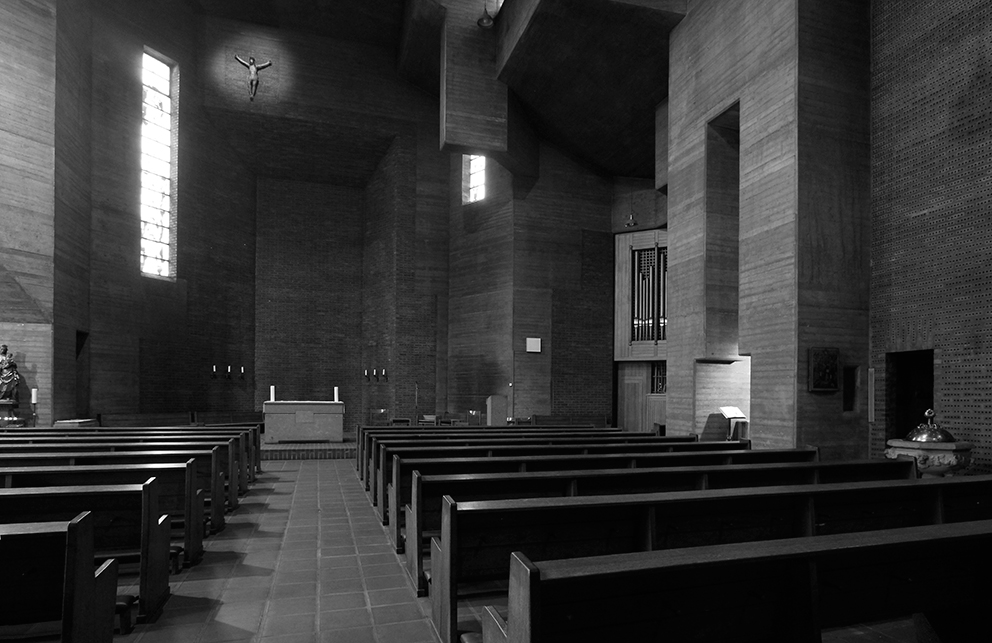 Even though it is illuminated by a spotlight you almost have to search for the figure from the Baroque. Photo © Uta Winterhager

Window detail in the Church of the Resurrection by Gottfried Böhm. Photo © Uta Winterhager 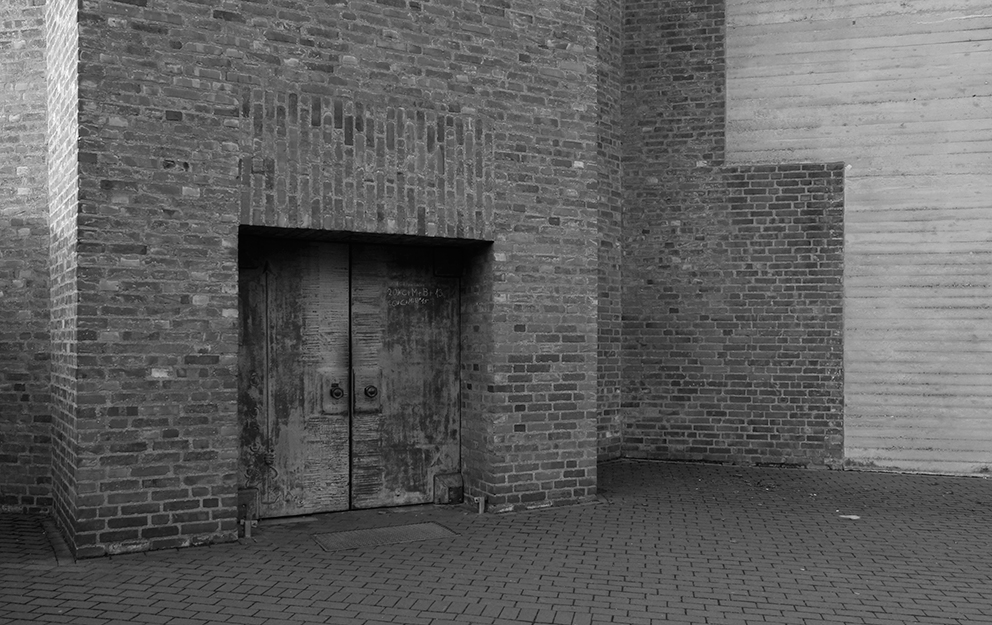