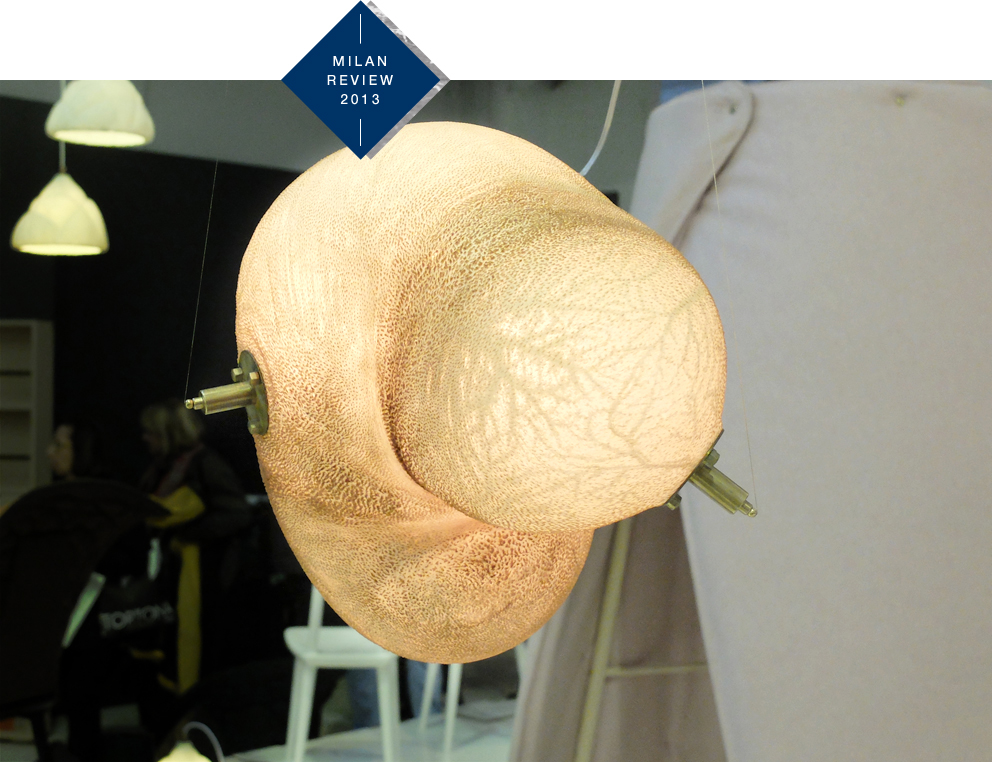 An unusual light from the Linköping University, Photo © Tatjana Prenzel, Stylepark
Anyone traveling to Milan to the Salone del Mobile in April is invariably looking forward to seeing innovative design, new aesthetically pleasing items of furniture and the latest creations by leading international designers and young stars. But a word of caution: Even the name of the greatest mavericks need not offer protection against marvelous mistakes. Leading you to ask: Does this have to be? The obvious answer: No! Some of it should not be.
Our design critic, who for good reason can only thrive in disguise, noticed seven deadly sins at the Salone del Mobile 2013 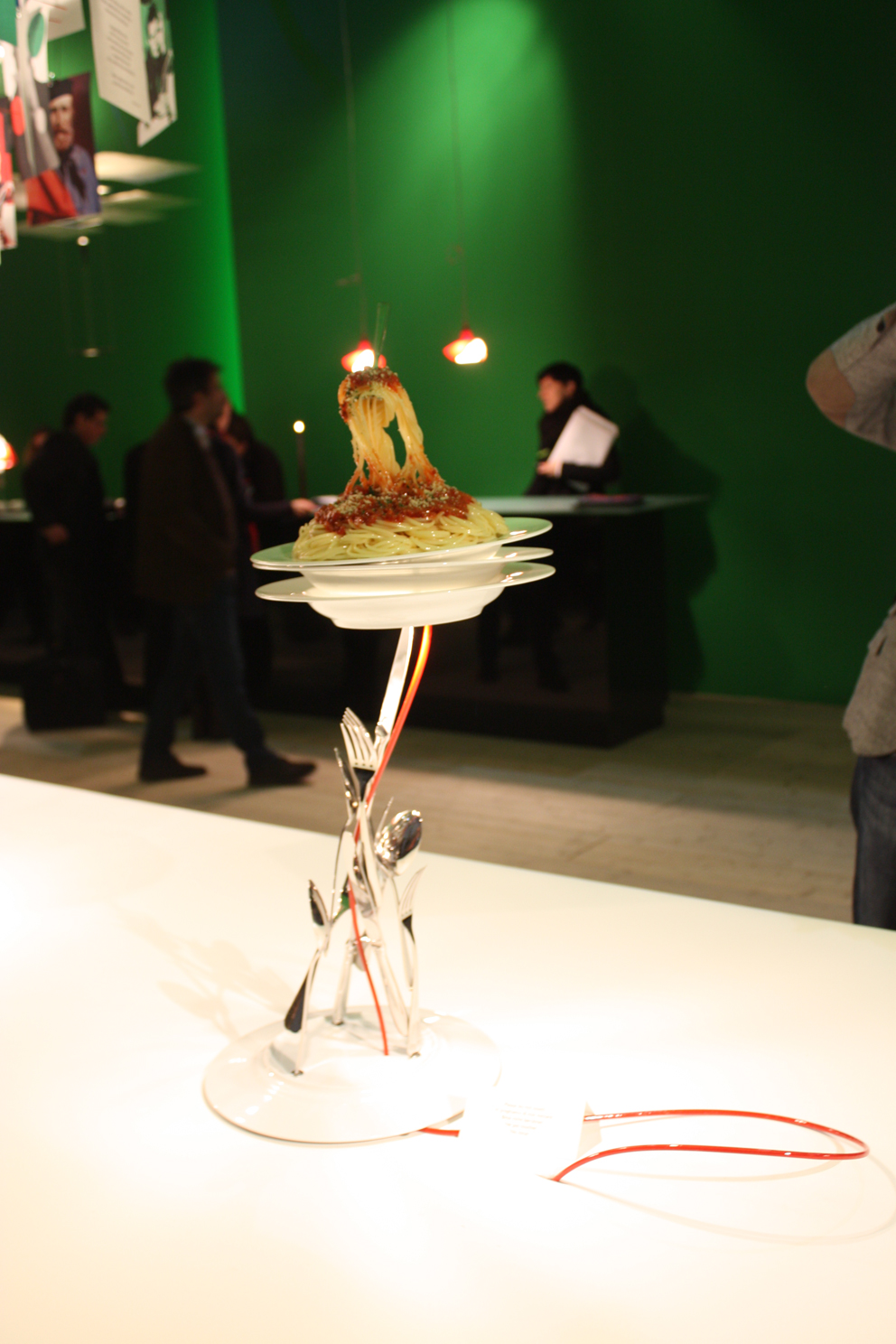 Sin No. 1: Ingo Maurer's spaghetti lamp is based on a disarrangement of forks and knives. Photo © Sabrina Spee, Stylepark
Sin no. 1: Showroom Spazio Krizia, Ingo Maurer

It looks like something that you might notice in a "designer luminaires" store in a suburb of a small town in Germany – and greet with a mixture of horror and amusement or schadenfreude. But from the great Ingo Maurer? A collection of knives and forks tower in some confusingly tangled skeins to support a stack of plates on the top of which, yes, take note!, there's a portion of spaghetti and tomato sauce, molded in plastic. Although it's a tough order describing the rest, a fork sticks out of the mess, boasting a first swirl of noodles ready to be eaten. It may sound tasty, but it's hard to top such tastelessness. This "design for a lampshade" is the relatively undisputed leader of our hit list (which politely dispenses with the prefix of an 's'), whereby the rivals are no less great and outstanding. 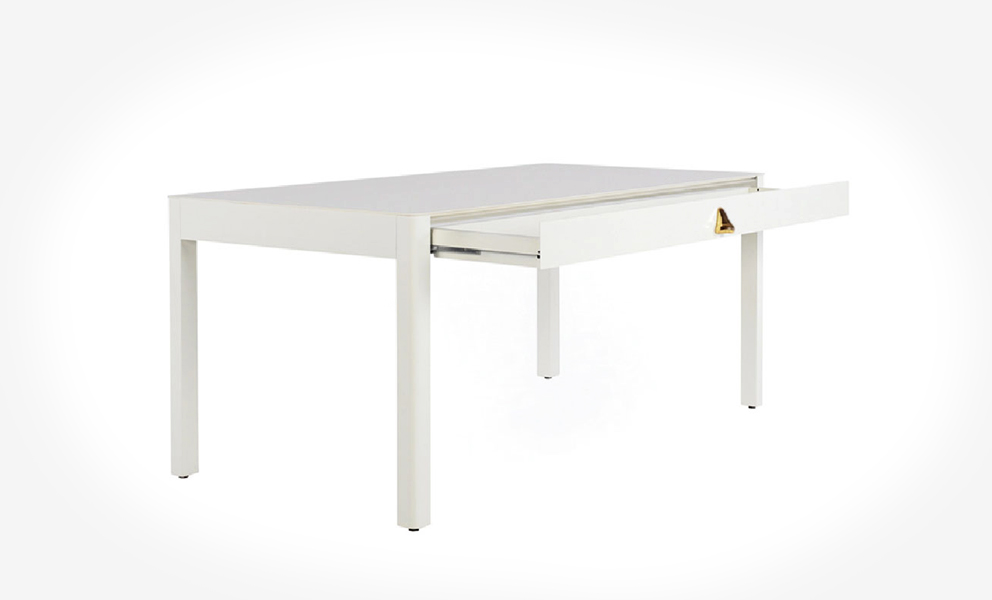 Sin No. 2: Job Smeets for Lensvelt. Look on the drawer handle, pardon, the nose handle. Photo © Lensvelt
Sin no. 2: MOST, Studio Job

Dutchman Job Smeets is as cool as he is unapproachable, a media darling and very definitely a very talented designer and even more gifted master of self-promotion. So why on earth did he resolve to ply his mischief in the field of furniture and product design? In Museo Nazionale della Scienza e della Tecnologia, abbreviated (confusingly at first sight) as "MOST", derived from the English acronym of its name, he has filled a glorious room with white cupboards and outsized golden bowls (hahaha!) and luminaires that do not reveal even after the 100th inspection in what sense they could be read as the result of a creative design process. To crown it all, there's a table with a golden nose by way of a drawer handle. It does the room no justice at all, nor is it nice to visitors who have dragged themselves past old steam engines and jet turbines to get to the original venue – only to be greeted by something completely uninspiring. Very irritating! But you were potentially warned: Posters displaying Mother Theresa, Muhammad Ali and other celebrities, all boasting golden noses, brought to mind another Dutchman, likewise a master of self-presentation and self-exaggeration, but one completely impervious to tastelessness: Marcel Wanders, who by way of exception is not among our Magnificent Seven. Because for years he has been loyal to himself and pursued his manic, kitsch-dripping, neo-pseudo-Baroque designs. 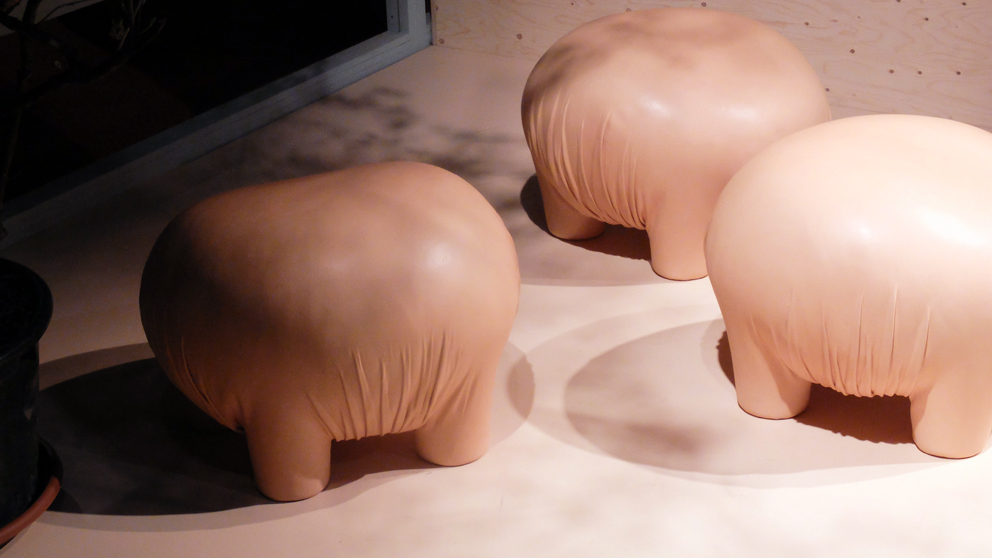 Swedish next-generation stars Charlotte von der Lancken, Anna Lindgren and Sofia Lagerkvist have thrilled the design world for almost a decade as "Front" – dishing up delightful and eye-catching concepts and projects. And now they've created something puzzling? Is it a stool? A side table? Well, the function is evidently not of paramount import. At least it's not what it looks like, namely a small headless and tail-less piggy. 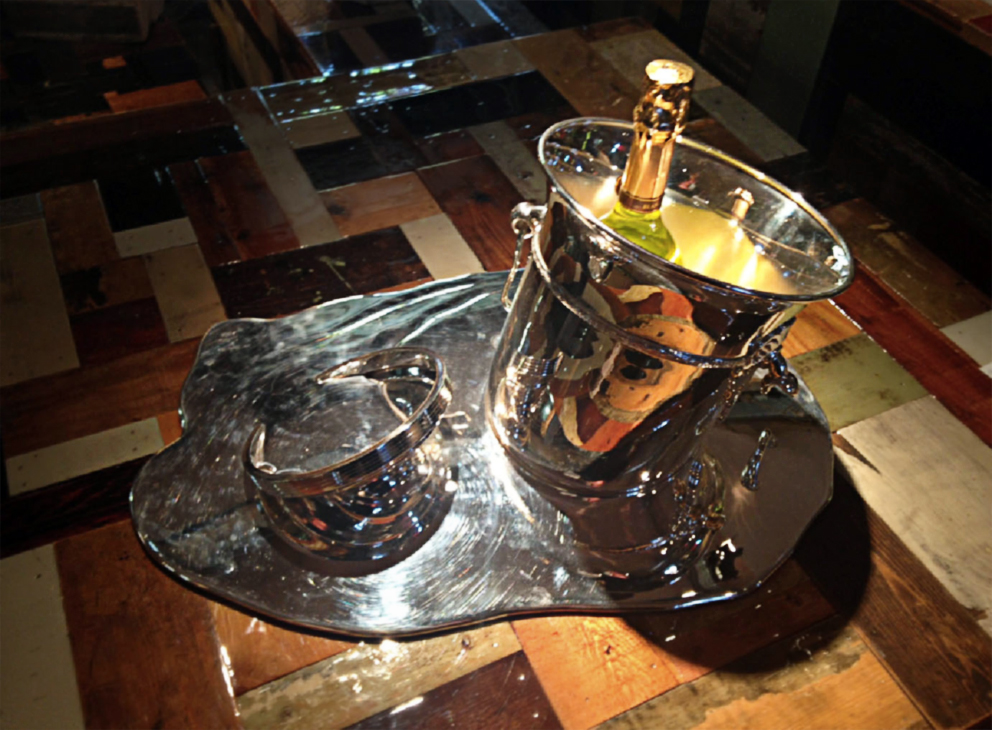 Another member of the young designers' champion's league is no doubt Dutchman Maarten Baas. In the maze that is the wonderful showroom of Rossana Orlandi, the small lady with the large white glasses, you'll suddenly encounter an object, for want of a better word, and it wouldn't be out of place in a shop selling fun articles and joke items: A champagne cooler bucket that, along with the lid on one side, is melting away. The flowing silver forms the base for the overall piece. Not that it can be used. After all, who'd want to? Not even Reinhardt who commissioned it. Maarten Baas has realized many a marvelous project: turning classic wooden chairs into charcoal, reinventing time or rather time displays. So why has he now gone and done this? (And, incidentally, what on earth's wrong with the Dutch, the children and grandchildren of Droog Design? It's amazing how many items from the polder-land seem to have been created by a wicked poltergeist.) 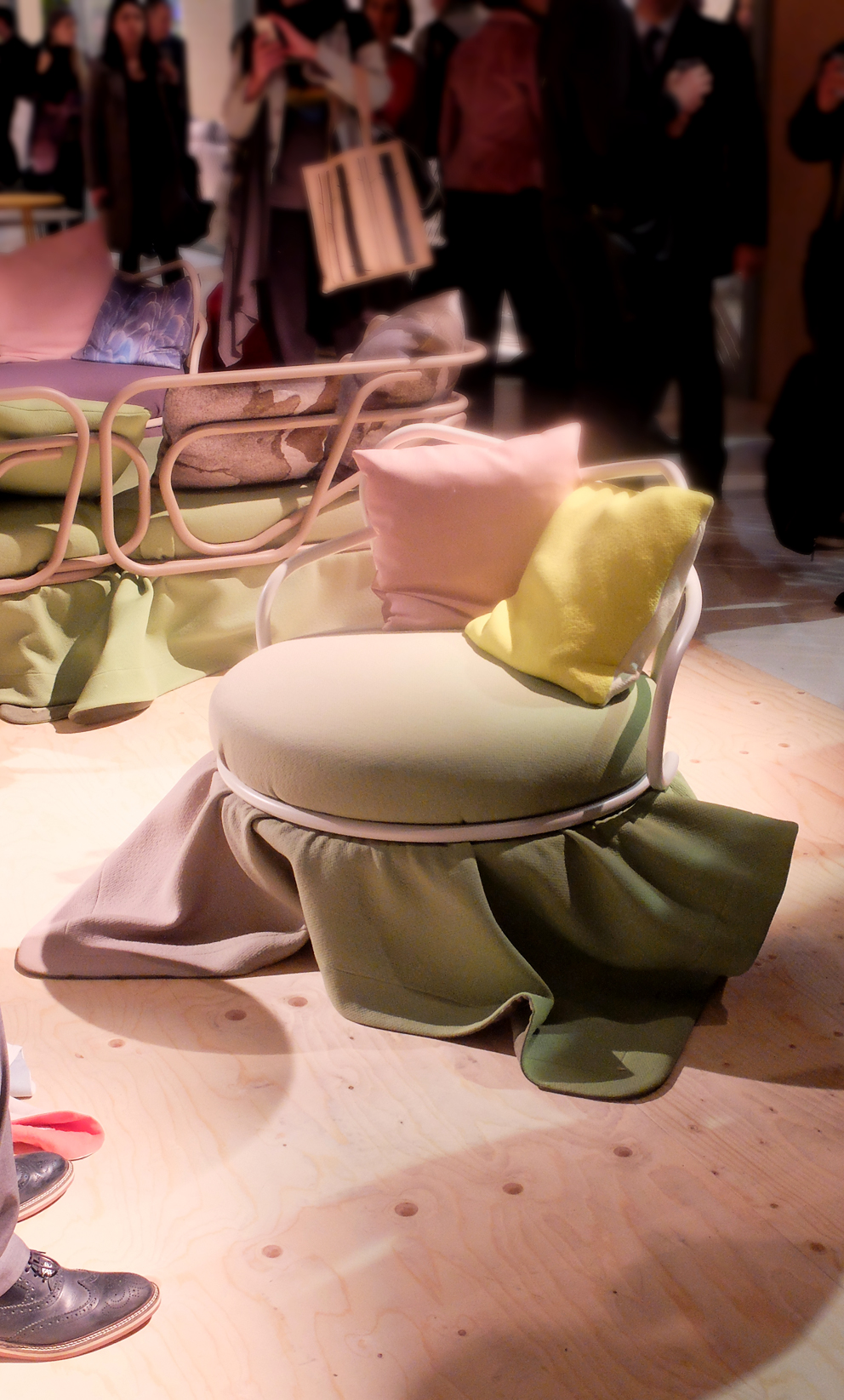 Sin No. 5: "Oasis" by Atelier Oi for Moroso. What? should? this? mean? Photo © Tatjana Prenzel, Stylepark
Sin no. 5: B&B Italia, Moroso, Atelier Oi

Swiss trio Atelier Oi is pretty much the rage among the global players in the Italian furniture industry. To which one could quip: Oi, oi oi! A floral, seemingly 3D seating cushion cover made of scraps from leather cut for other pieces of B&BItalia furniture forms the highlight of this year's presentation in the showroom on Via Durini. With their politically correct and so well-meaning waste-not-want-not design, the Ois have almost fallen short of a second-year student project. A real shame. For the designers and the client. They were also hired by the trend-seekers at Moroso. Hard to believe that anyone wants to buy as 'idiosyncratic' shall we say an armchair as "Oasis". So how to describe it? A blanket cast over a seating cushion is held or rather clamped in place by a demonstratively fat iron tube bent in the backrest to form a rounded rectangle with mysteriously shaped struts. What? on? earth? is? this? Yet again, tastes differ. 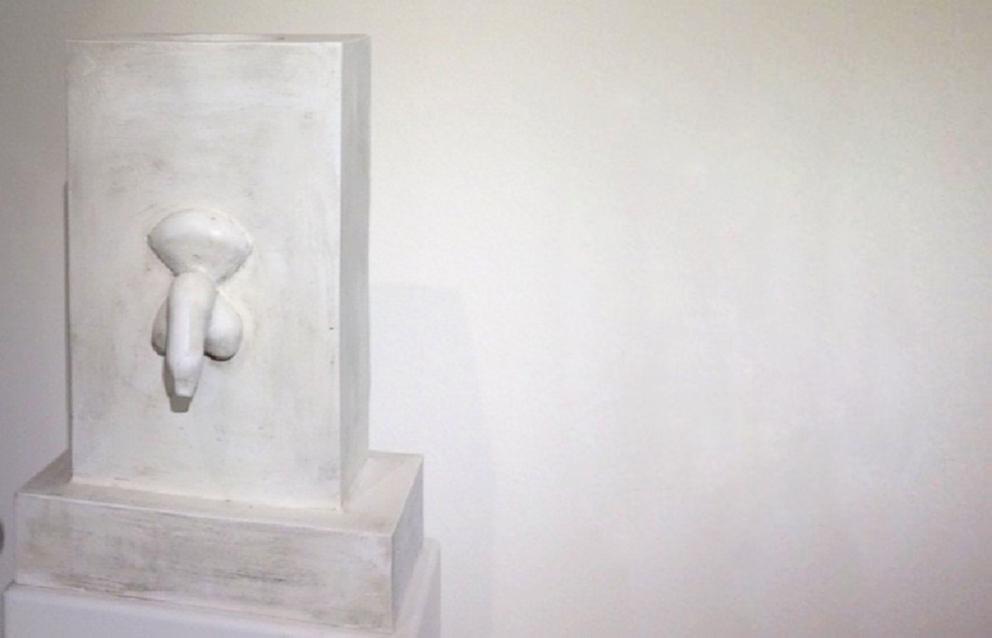 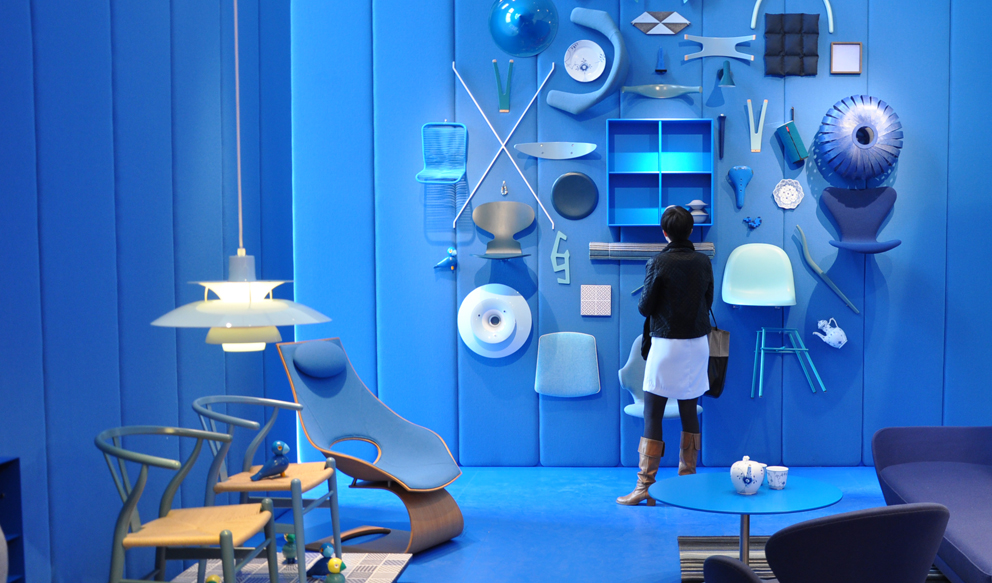 Sin No. 7: "Dream Chair" by Tadao Ando. The portfolio of Carl Hansen could offer better designs in past. Photo © Robert Volhard, Stylepark 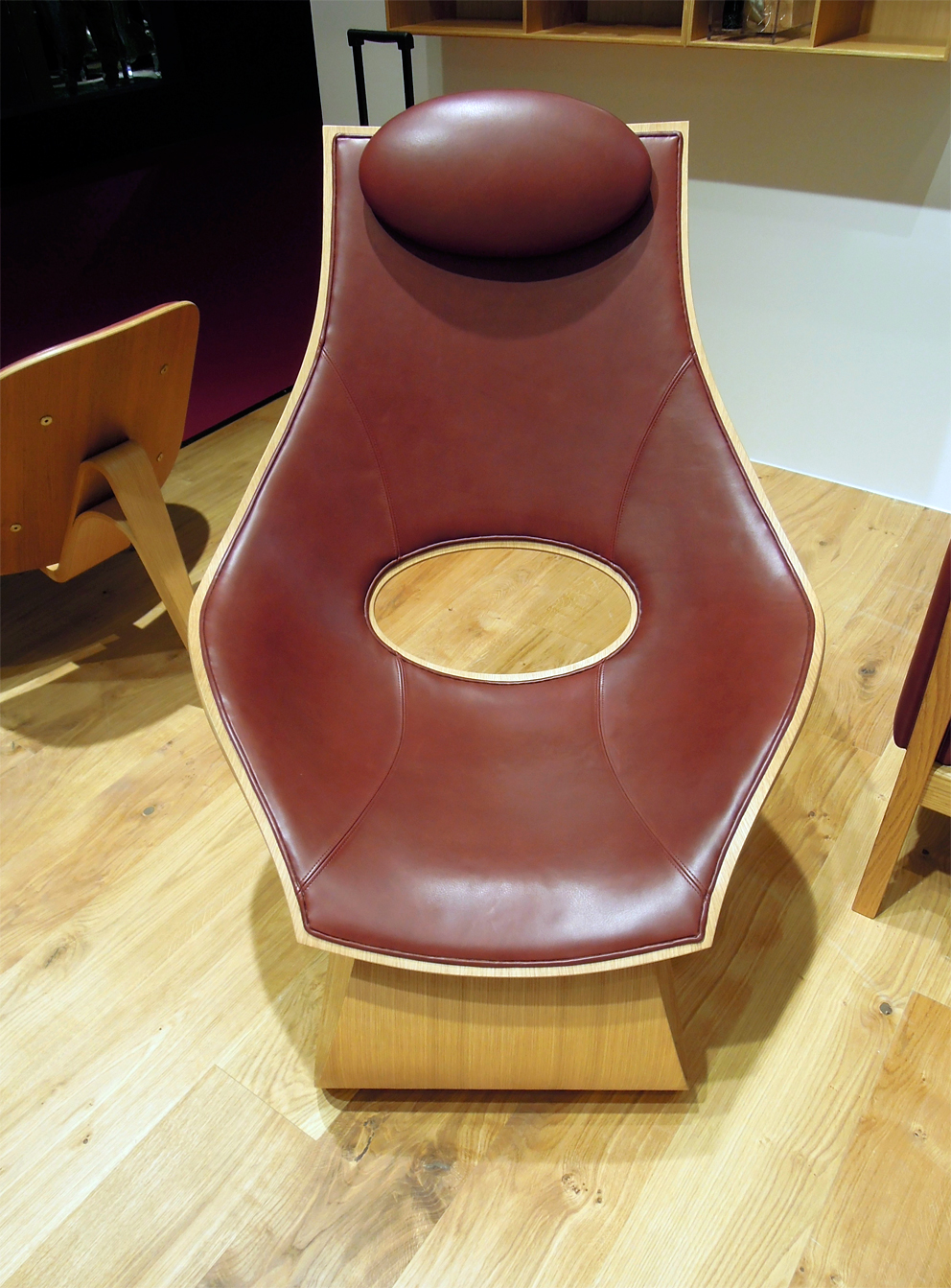 Danish company Carl Hansen distributes beautiful and definitely cherished design classics by that famed Danish designer Hans Wegner. Sadly, he is long since dead so other designers had to be found for new pieces. But a big name is not necessarily a guarantee for a great idea, as demonstrated by the "Dream Chair" created by Japanese architect Tadao Ando. It's floated as the conclusion to a series of Wegner classics and is, one assumes, meant to point up the linkage of Danish craftsmanship and the formal Japanese tradition. The other way round it might have a whole lot more sense. 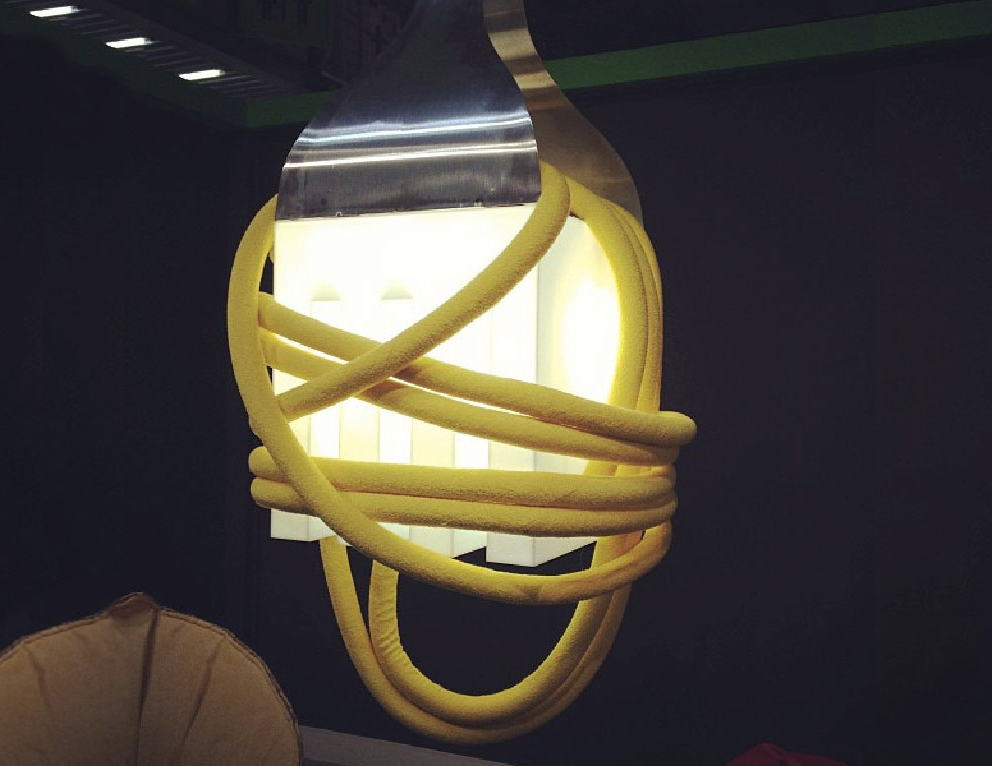 Pathbreaking joke: long spaghetti up on a light. Work by young designers Barbi Botazzo. Photo © Robert Volhard, Stylepark
Incidentally: Spaghetti lamps are unfortunately not just the brainchildren of major lighting designers. At the trade-fair show for new talent, a duo going by the name of "Barbi Botazzo" (a name suspiciously redolent of underground design) tried its hand at turning meals and the associated utensils into lighting. The ceiling luminaires could, if you're very imaginative, be construed as resembling the tines of a fork. To visualize this trailblazing gag the tandem wrapped a thick yellow rope round the luminaire, whence it falls to earth. It remains to be hoped that in the future their creative zest feeds on the energy of the early Ingo Maurer. 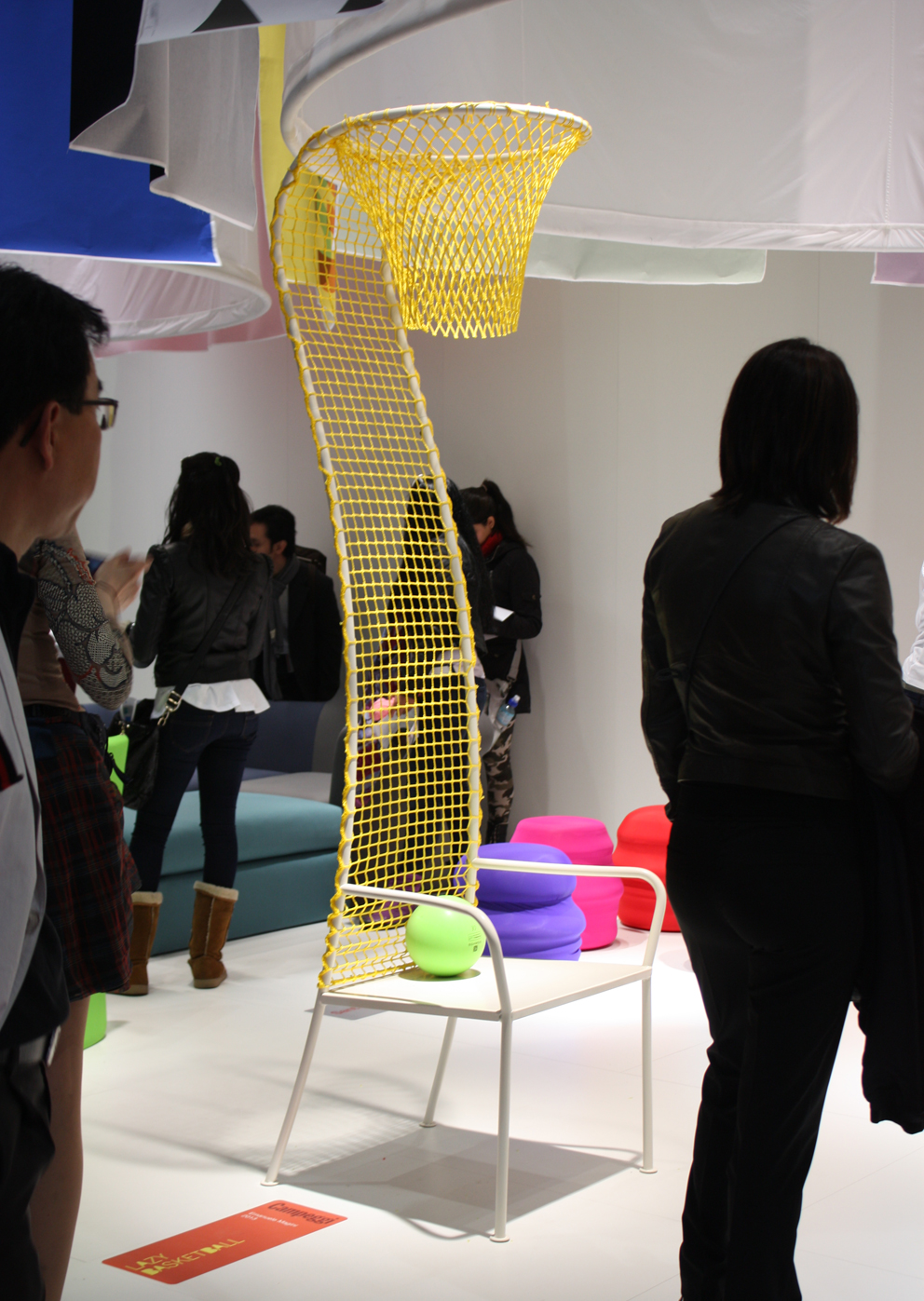