Creativity is one of those things. It doesn't always get you to where you want to go. "Hegel's Holiday" is the title of René Magritte's painting from 1958. The painter depicts an open umbrella with a glass balanced on top filled two-thirds with water against a monochrome ochre-colored backdrop. Magritte loved paradoxes, which he subsequently transferred into images. And when Hegel is on holiday, logic is too. That said, the umbrella most definitely serves its purpose here.

The most important thing: vacation

But what does that have to do with design? Well, in one of Ventura Lambrate's venues, swarming with young creative minds (something like a cross between a university tour, a gallery, and a funfair) there stands a small table: it's part of a show curated by Werner Aisslinger, Fabien Dumas and DMY Berlin entitled "Instant Stories – Made in Berlin". Designed by Fabian Freytag and Oskar Kohnen, sold by small Berlin Label "Rakso Naibaf". The name is simple: "Parapluie Table". And to make sure that everyone gets the joke the designers have even included the note: "This is not an umbrella!"

There is no better paradigm for the absence of any rationality whatsoever. First they steal a pictorial motif from Magritte and then they turn it into a poorly designed table. There seems to be absolutely nothing left of Hegel's "The Cunning of Reason" – a process, whereby in the evolution of human history a particular purpose is realized; a process, the acting person is oblivious to. Unfortunately this is just one of the many cases where design is misunderstood as an imitation of art and a kind of playground where strips of light are knotted together, stools made of inflated sheet metal are replicated, and bunnies hop around on cups and saucers. In Milan this kind of design is to be found in abundance and not just at the Ventura Lambrate. But does that really have anything to do with the future?

The chair as biotope

Even the co-curator of the Berlin show, self-declared eco-designer Werner Aisslinger, obviously isn't all that particular when it comes to the sensible side of his ideas. Growing bamboo in a chair frame made of metal isn't an especially good idea, let alone calling the glasshouse a "Chair Farm"; even if it is intended as a metaphor for renewable raw materials. For all its eco-friendliness, there remains a fundamental flaw in this visionary ensemble. It either shows that nature should still be domesticated, or that the designer has delusions of grandeur with himself as nature's master. But perhaps he also thinks that nature, which is after all much more powerful than him, is capable of that which he himself is incapable, in the end rendering him superfluous all the same. And so, we see that Hegel is away on vacation here too. And that the future of design could possibly have something to do with renewable raw materials: well, any child could tell you that.

The intention behind many of these ideas may indeed be noble but for the most part they tend to be badly executed. Naïve and with their heads in the clouds, the minds behind many of the stands occupying the former factory halls just seem to be generating a great deal of fuss. They are all trying to tell us that everything will work out just fine – the world's problems can be solved with a few heads of salad planted in the vegetable patch up on the roof. Those elements that are actually worth considering here are not made any more plausible by cocooning in an overly romantic way or withdrawing into a niche. In a very general sense, the only thing that you can take home with you from these greenhouses of creativity ( which only consider themselves rich in ideas and knowledge but are in fact fundamentally lacking this area) is the perception that rationality – in the practical/instrumental sense no less than the aesthetic – is most definitely on vacation here.

There were other instances too. You don't necessarily have to love the aesthetic qualities resulting from the collaboration between Lensvelt and Van Lieshout's studio, but one must say that with his show "World War III / Furnication" Joep van Lieshout is the only person who even comes close to disturbing the peace in Milan, placing a mortar at the center of the hall full of furniture, the canon painted the exact same blue as the other items. I'll leave people to make up their own minds about the host of connotations this conjures up.

If it is the tangible that forms the focus here and liberates the eye from many an illusion, it is a very different perceptive on the matter of the future that confronts you at Superstudio Più. It takes just four minutes to visualize the future, or so says Samsung. Full of expectations you step into a room that is almost empty bar a single tablet computer; here the future initially looks really quite black or bleak. Only when you take a look at the small screen, which holds this "augmented reality", does color come into play. All of a sudden, you are looking into a kitchen, a living room and a bedroom – alone, all of the grayness that surrounds you and the virtual world of the future, together with those caught up in it, remains very flat and very small. It is astonishing just how elaborate the media inputs at play here are, as is the meagerness of what you get from it, in terms of experience and aesthetics in any case. I don't get the impression that such technologically-advanced amusement games will disappear any time soon; on the contrary, we can only assume that in the future this meaningless and uncritical fascination, which emanates from the technology itself, will continue to dominate our everyday lives more than ever before.

That there is indeed is another way to do things is aptly demonstrated by Tom Dixon, who inspired a show entitled "Most" held in "Museo Nazionale della Scienza e delle Tecnologia Leonardo da Vinci" which presents a variety of different manufacturers and labels, which positioned among the museum's own exhibits are lent a special new quality. In the Milan Museum of Science and Technology the products accrue a context, so to speak, which anchors them in industrial history, though this did not always prove advantageous for the furniture, lighting and accessories on show. But when a punching machine stands at the center of the huge locomotive hall, which Tom Dixon then uses to create a chair, the product doesn't stand alone but is bound up in the process of its own creation. Here Hegel has finally come back to work. After all, we can't be on holiday all the year round. 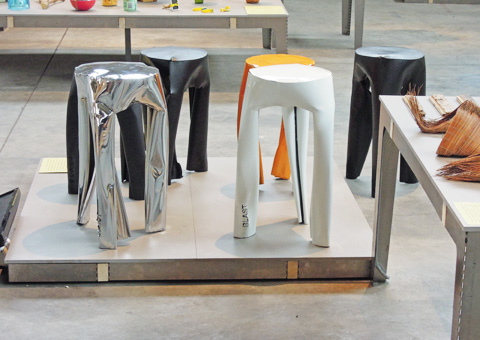 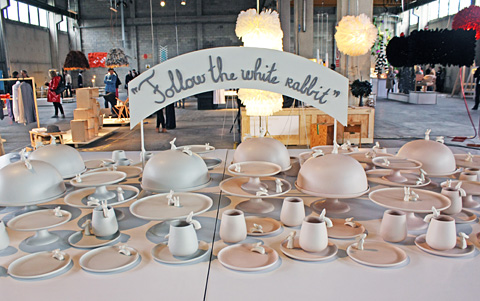 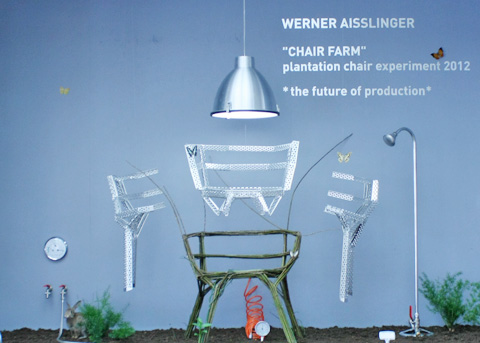 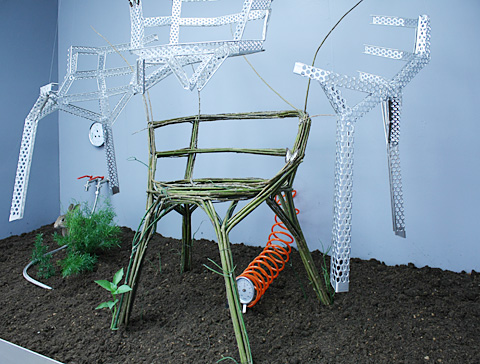 Bamboo grown in a chair frame out of metal, photo © Dimitrios Tsatsas, Stylepark 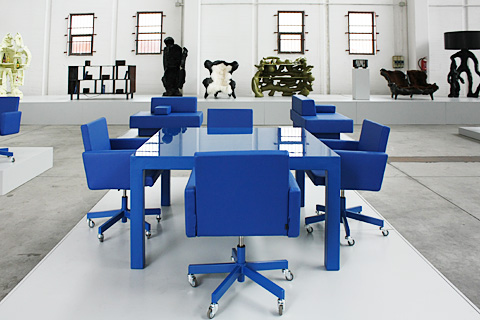 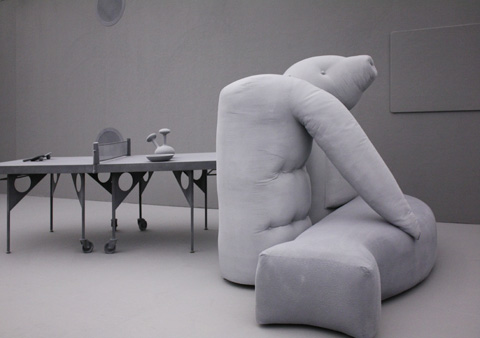 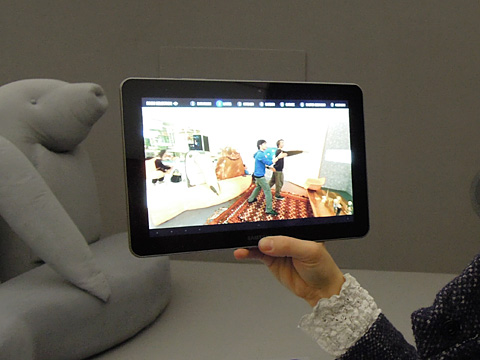 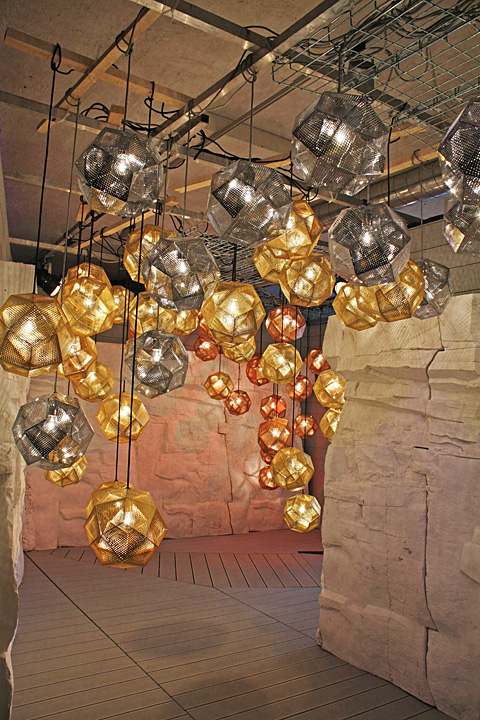 Presentation at the Milan Museum for Science and Technology, photo © Dimitrios Tsatsas, Stylepark 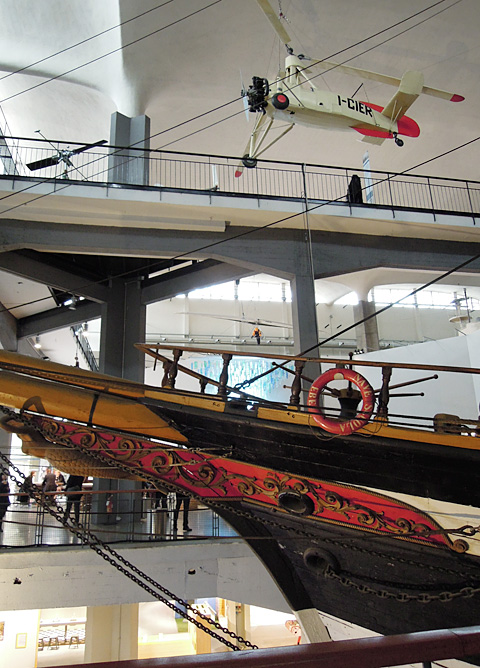 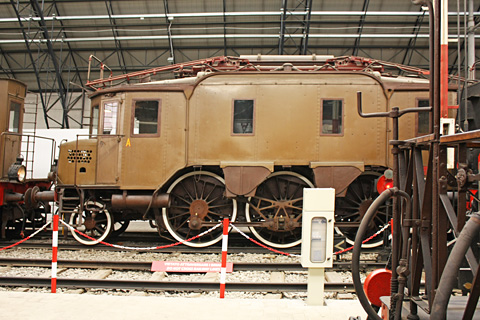 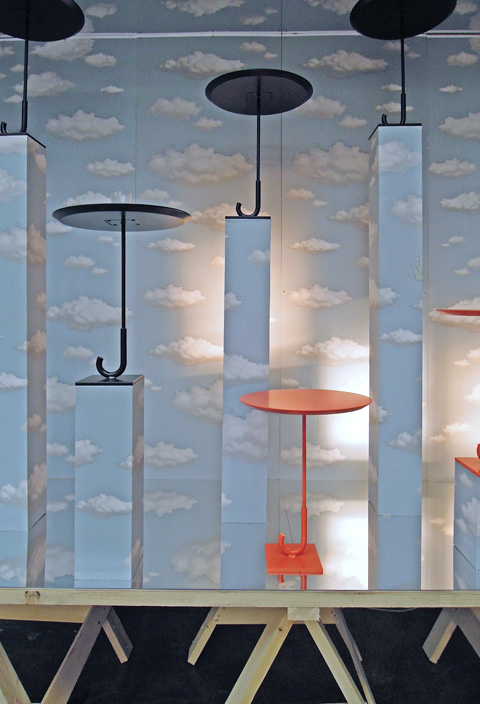 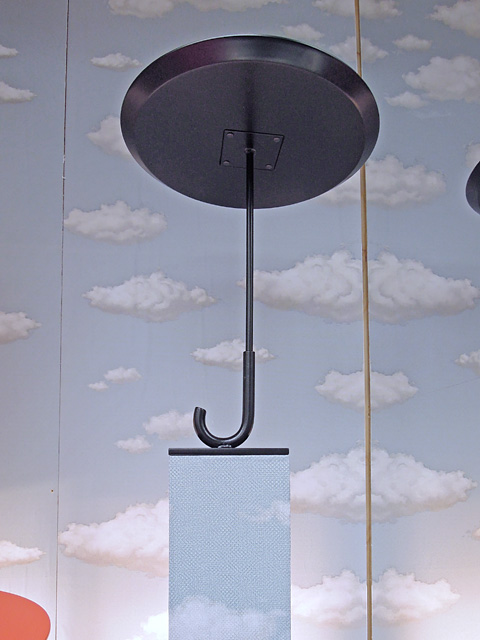 “This is not an umbrella!“, photo © Thomas Wagner, Stylepark 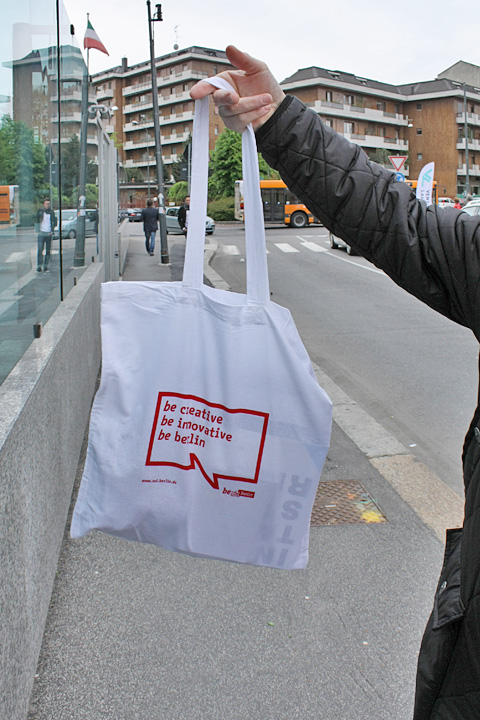 “be creative / be innovative / be berlin”, photo © Dimitrios Tsatsas, Stylepark 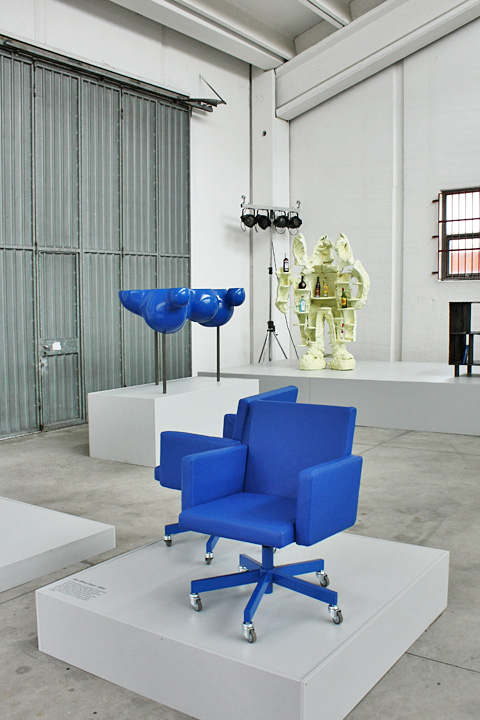 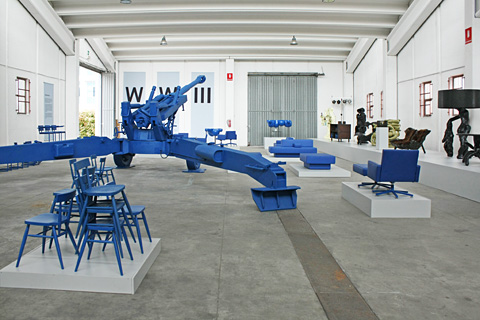 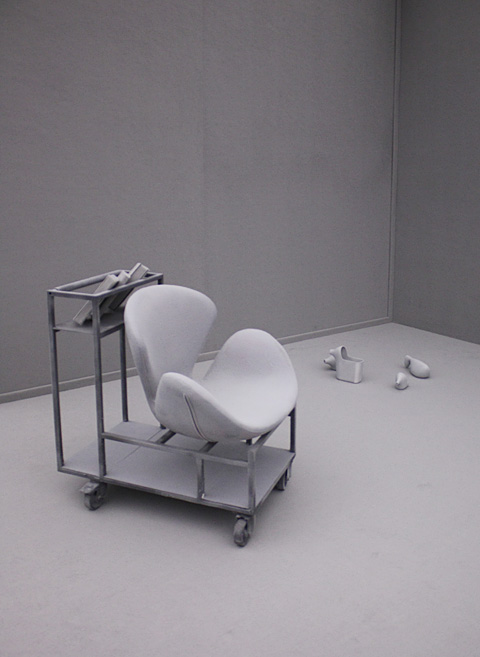 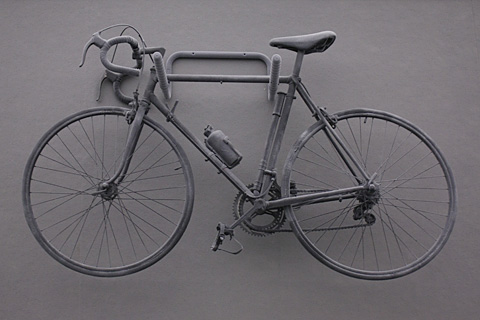 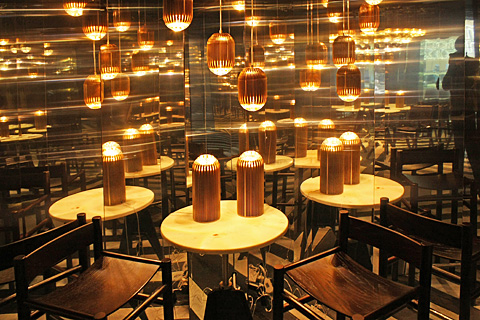 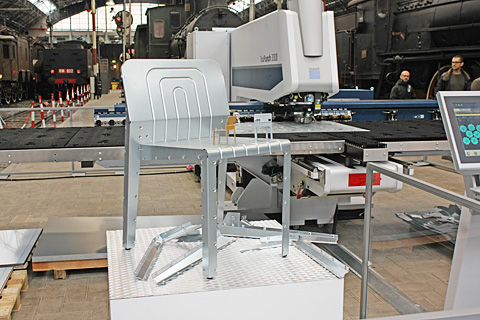 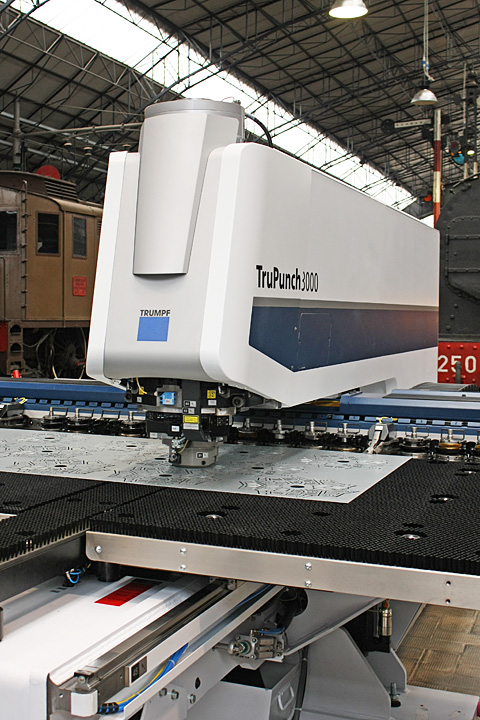