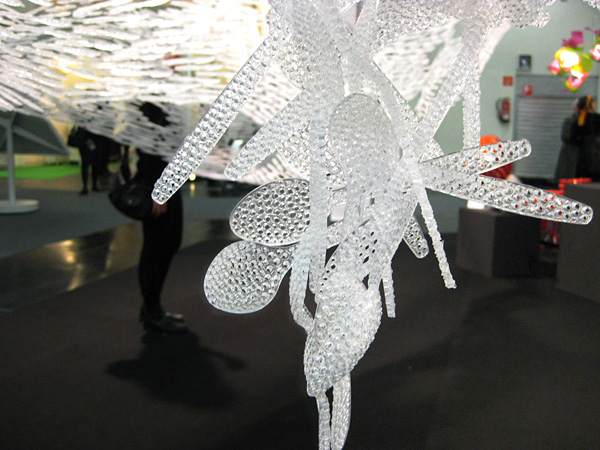 Well, it's just the way it is: tempus fugit, as a Latin scholar might be wont to say. The days pass by in frosty fashion, while the sand of time trickles through the designer hourglass. January - here we go again. Nonetheless, the month promptly sets a series of automated sequences in motion: tidying one's desk, changing the calendar, planning the year ahead, booking the skiing holiday, taking old newspapers to the trash and, last but not least, writing the announcement for imm cologne, the first furniture fair of the year.

From January 18, 2011 (not counting the preceding press day) it is that time again. For one week, the furniture world's own groundhog, which on the River Rhine is awakened early from its hibernating slumber, will be on the scene, announcing not weather forecasts, but business successes, highlights and events. Even if in recent years, if we may be frank, the fair showed certain signs of fatigue, confronting us with the - admittedly not always easy - choice between, let's say, Bauhaus and brewery house, this year one thing is already transpiring: There are efforts being made in Cologne, the foot is clearly on the gas pedal. There is hope after all.

The clearest indication, judging by the way in which the fair and its satellite events are structured, for this is perhaps that the fair organizers have this year opted for continuity and consolidation. After all, and despite Westerwelle making waves, "middle class" is hip - the solid rock in the global storm. Even if the trade fair planners are reluctant to let go of their bad habit of immediately proclaiming the latest trends in interior design. Sadly, in 2011 too this means little else but to toss a number of inflated words and meaningless phrases into a big drum from which the latest prattle is then pulled. Here is an example: "No longer is the reduction to the essential the product of intellectual arrogance or emotionally drained asceticism; it is moreover a sign of profound sensibility and the search for inner truth." Nothing in this sentence makes any sense, but so be it: Man, and even the Rhinelander, seems to get a kick out of what is hip, the blabbering creature and his strange rattling on about "homing" and "balancing" and "transforming".

In sum, we can expect the usual quodlibet in Cologne. But let's be fair: All trade fairs are nothing but this. That said, if in doubt, simply call good old Giorgio Agamben to mind and what he says about the "coming community". Because the coming being is meant to be just that - a chosen state of being, one that is generally liked. Which makes one thing clear, namely that our world is nothing but one big fair of arbitrary events. But is that enough? What precisely is awaiting us in Cologne this year?

A "space for trends and business", imm cologne with its segments "Pure Village", "Basic", "Comfort", "Prime", "Smart", "Sleep" and "D3 Design Talents" is generally keeping with the tried-and-trusted, but celebrates two premieres with "Living Kitchen", a new international kitchen show, and "Pure Textile". It is plainly obvious that textile manufacturers such as Chivasso, Création Baumann, Christian Fischbacher, Jab Anstoetz, Kinnasand, Nya Nordiska, Sahco, Wellmann and Zimmer + Rohde have high hopes in "Pure Textile" and the interplay between their textile products and furniture and accessories. It remains to be seen if the concept works out. Moreover, aside from new presentations featuring in the trade fair's own hall, the Design Post has this year relocated to the other side of the street, presenting on its fifth birthday five different interior spaces by the Design Post exhibitors at imm cologne's "Pure Village", which has been furnished by Cologne-based stylist Annett Janowiak.

Even the urban events, the Passages, in 2011 not only promise simple fare but hold one or two surprises in store. We are particularly keen this year to see the designer of the year, who is traditionally presented in Cologne by "A&W" magazine, this time once again on the premises of Kölnischer Kunstverein on Hahnenstrasse. Japanese designer Tokujin Yoshioka has been nominated for 2011. In true Japanese fashion he draws his inspiration from elements of nature as well as fragile materials, which he demonstrated equally impressively with his sofa "paper cloud" in 2009 and his "Memory Chair" in 2010. Oskar Zieta, the engineer in the design world who works with inflated metal, is furthermore going to be presented with the Audi-Mentor Prize - the ceremony will be held as usual at a party on the Sunday before the trade fair opens.

Moreover, "Hummingbird Mechthild" will be flying through the Wallraf Richartz Museum, while students at the KISD Cologne International School of Design will home in on "networking", apparently still a topical subject. At MAKK Museum of Applied Art old poles from Venice will be further processed (still sounds somewhat tacky to me), while at "Pesch wohnen" Jan Kath will give carpets a tough time in a bid to demonstrate that there is indeed a rough and deconstructive side to craftwork. Boffi will display the "Solferino" cabinet system by Piero Lissoni and Galerie Fiebach & Minninger the Belgian label "Feld". For those running low on fuel, "Hallmackenreuther" in the Belgian Quarter will once again provide refreshments in original Sixties-style surroundings - after all, where you enjoy life is up to you. Those interested in Alchimia will no doubt want to visit the Italian Institute of Culture, where illustrations by the group that was founded in 1976 including Branzi, De Lucchi, Mendini and Sottsass are on display. Meiré und Meiré will host Vorwerk carpets this year and invites visitors - attention, adults only! - to a "Back Room" which, among others, video artist Marco Brambilla will stage as architecture of the subconscious.

Plus: The "Designers Fair 2011" has with 40 young designers relocated to Ehrenfeld, more precisely to the Barthonia Forum, where between grassland and canteen, formluz and raumfieber, the "4th Design Parcours Ehrenfeld" will once again host its typical Cologne blend of crafts, design, fashion, architecture and funfair.

Those not in the mood for trend spotting or fractal flowers of evil will have to content themselves with Monte Cristo. Albeit not the famous Count but the eponymous hotel. There, or more precisely in the hotel's former Camouflage Club, or so the tale goes, they will encounter an interactive installation of a special kind. But no, don't worry, there will be no supposedly dead people forced to flee from the club's jail. Rather, students at Mainz University of Applied Sciences have in the Monte Cristo designed a light installation consisting of 1,600 LED lights that is controlled by the amount of Kölsch beer consumed by the visitors. Which nicely answers the question of "Bauhaus or brewery house" once and for all by way of synthesis. So, cheers, until the lights go out.