The Hanging Gardens in Assyrian Babylon, one of the seven wonders of the Ancient world, are presumed to have consisted of a square garden compound with thick walls and pillars. – A garden of paradise surrounded by a wall. So what happens when instead the gardens wraps round the walls? Wong Mun Summ and Richard Hassell of Singapore's Woha architecture office cloak entire high-rises in rampant robes and have them blend with nature. They place water, indeed entire parks, inside buildings, and let the breeze blow through the edifices. Deutsches Architekturmuseum in Frankfurt/Main has now devoted the first solo show to the office, founded in 1994: it covers the company's 19 projects to date and presents them if not in living then at least in 3D form.

As one of the world's most densely populated cities with an ambient temperature the year round of 32° C and a strong monsoon, Singapore challenges buildings to meet special conditions, whereby building skywards only minimizes the lack of space. But classical high-rises, originally developed to meet Western climatic conditions, fly in the face of the cultural, climatic and regional prerequisites of the Tropics. Their naked sides are exposed to the sun, bereft of protection, making it indispensable to hermetically seal off the façade and introduce artificial air conditioning.

At the same time, for some years slogans such as "green design" and "urban gardening" have been literally popping up out of nowhere, with botanist Patrick Blanc giving entire house fronts a green look with his vertical gardens. In fact, back in 1991 artist Friedensreich Hundertwasser was already busy championing planting trees on house facades, as he advocated the uncontrolled wilderness as a contrast to the anonymous, sterile and technocratic urban desert. However, his imagination did not stretch as far as nature handling technical tasks, too. A few years ago Renzo Piano designed the building for the California Academy of Sciences – creating a form of architecture that was a built eco-system and visually as good as melded with the surrounding countryside. It seemed obvious to cover the roof, a full hectare in size, with local fauna. But what if there is hardly any roof space? With a view to the requirements of tropical megacities Woha advanced the idea of a synthesis of architecture and nature for high-rises, and have designed buildings that may seem like fantastic utopias but are actually already a reality today.

Woha's visionary architecture actually relies on the simple traditional building methods and insights from nature. Their source of inspiration was the tree: as both sun shade and rain shelter while open on all sides. Like an umbrella it spans houses in traditional Southeast Asian villages, the kampongs, providing protection from solar radiation, the forces of nature, and as a place for encounters encourages social interaction. But how to span a shade across a high-rise, especially if it boasts as many as 50 storeys?

In order to create shade in their buildings, Woha rely on the potential of plants, place trees on balconies, let vines creep up facades, and include entire parks inside their building. At the same time, they exploit the airy heights of high-rises: by means of porous facades, the wind can flow through the buildings to provide natural cooling. In this way, back in 2003 Woha developed a special monsoon window that keeps out the rain even when it's severe. And in the form of "The Met" in Bangkok they have consistently advanced the idea of an open structure: the high-rise consists of six freestanding towers connected with one another by communal terraces – ensuring cross ventilation and rendering air conditioning superfluous. The planned residential and office complex "Parkroyal on Pickering" continues the line of the neighboring park and its "Sky Villages" are just that – and a long way up combine streets, parks and gardens. The result: airy, shady oases full of plants that offer privacy and community, and thus give the inhabitants back the feeling of living in kampongs.

Deutsches Architekturmuseum has dedicated a full 500 square meters of exhibition space to Woha's visions and projects, which are presented using large-size photos, models and furnishing both informatively and with great variety. The exhibition design takes up the idea of opening up the buildings in a meaningful way – in the form of interactive windows behind which there are project descriptions and excerpts from interviews. Illuminated walls not only display hand sketches, but also provide lighting to great effect. In this way, the exhibition certainly ensures that Who's visions can be experienced in all three dimensions, even if they do not actually come to life. 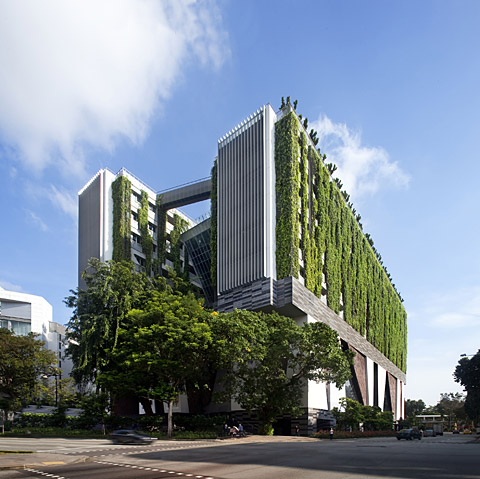 “School of the Arts” in Singapore, 2010: naturally illuminated and conditioned in all areas, photo © Patrick Bingham-Hall 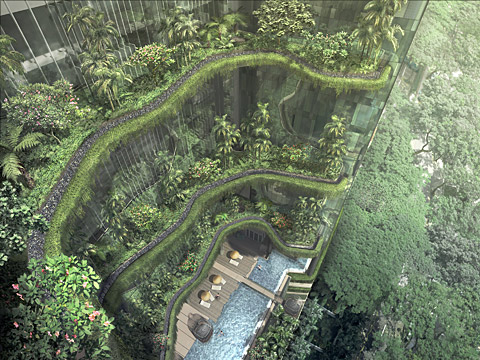 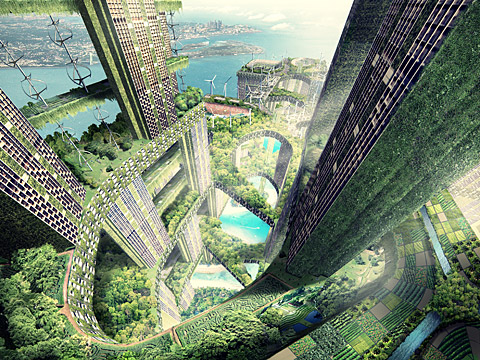 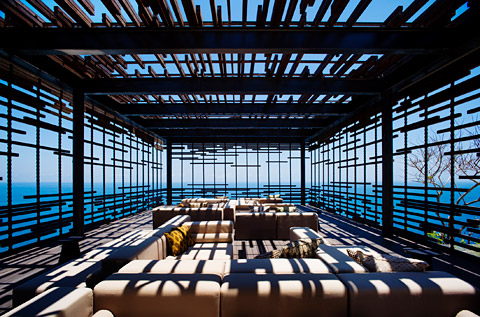 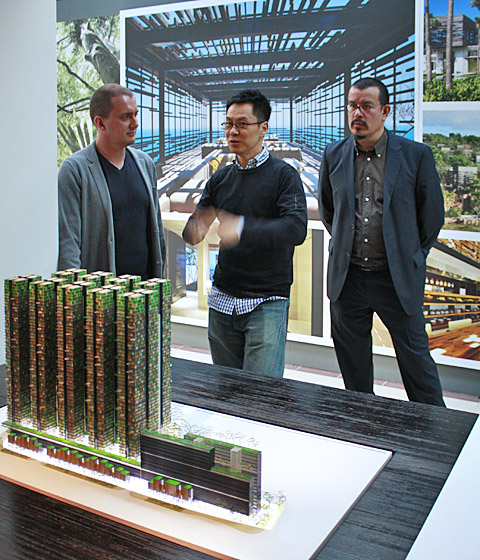 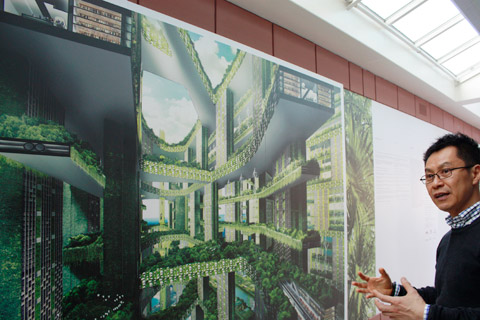 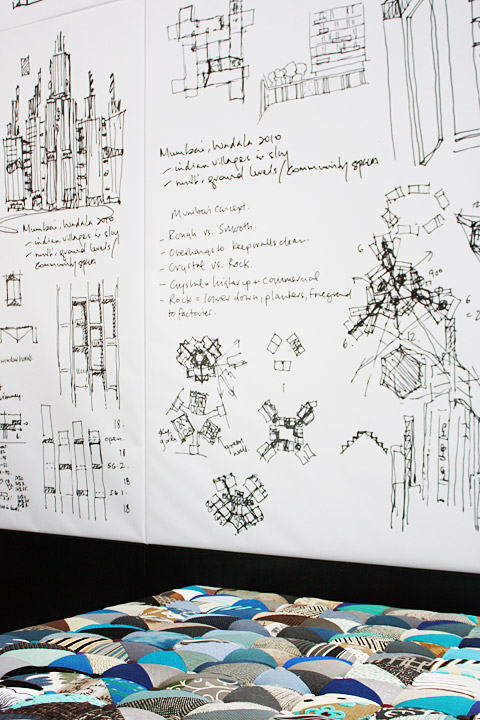 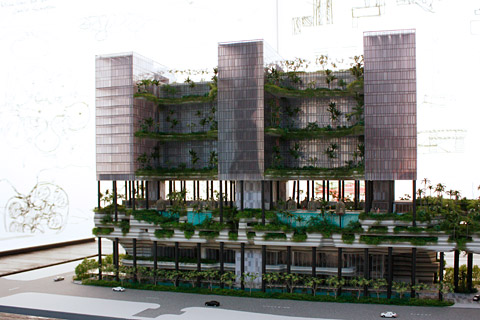 Model of the high-rise building “Parkroyal on Pickering“: Between its towers are located “Sky Gardens” with palm and frangipani trees, photo © Nina Müller, Stylepark 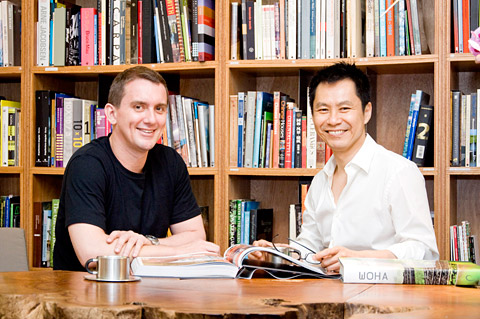 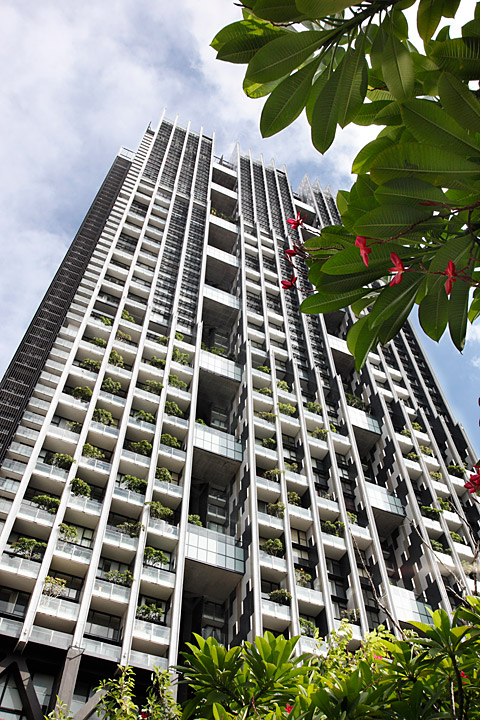 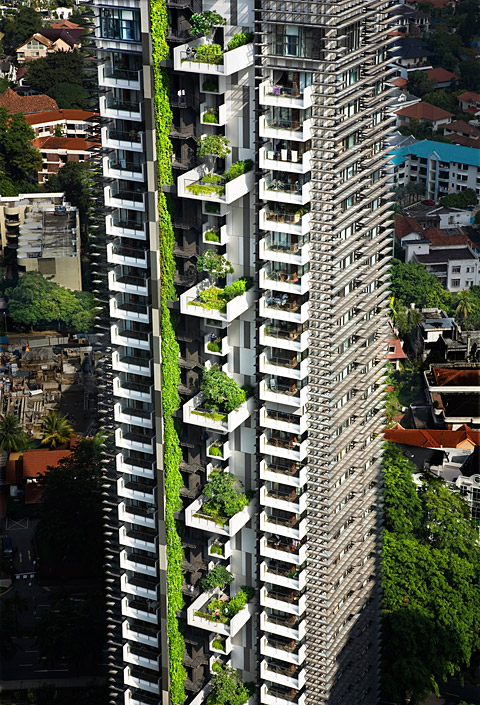 High-rise apartment building “Newton Suites“ in Singapur: The tree did not only serve the architects as source of inspiration, it can also be found on numerous balconies, photo © Patrick Bingham-Hall 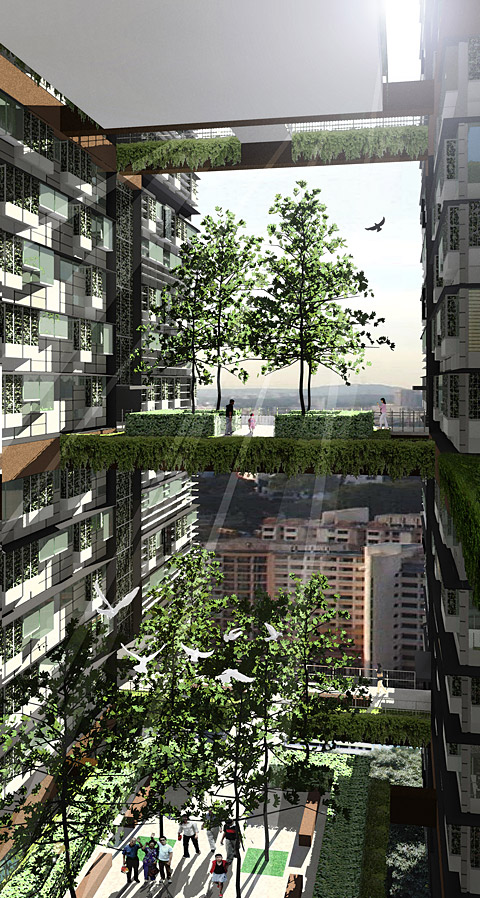 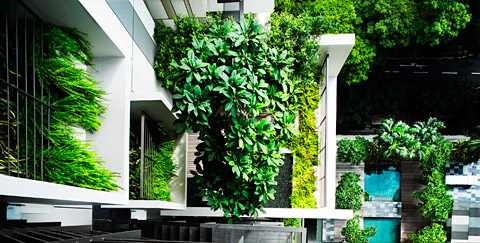 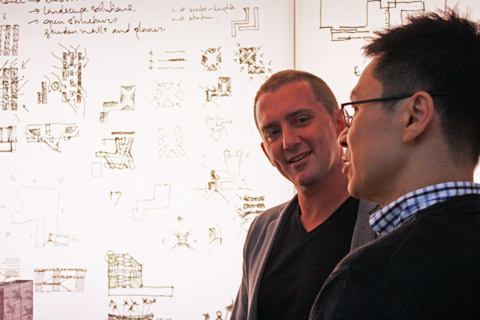 The architects from Singapore in the exhibition in Frankfurt am Main, photo © Nina Müller, Stylepark 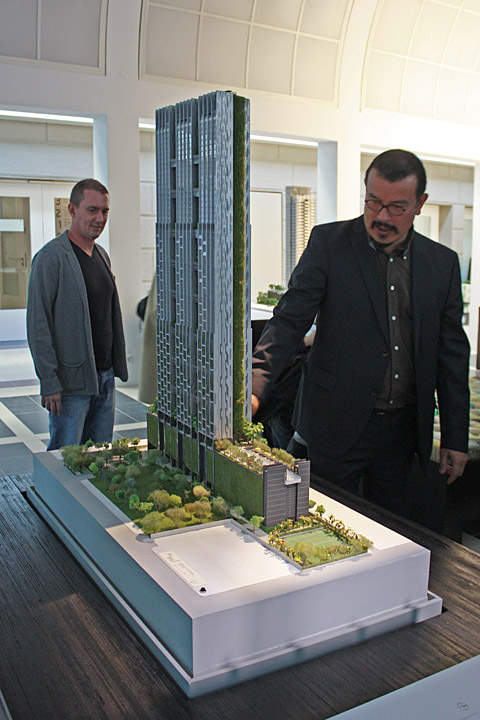 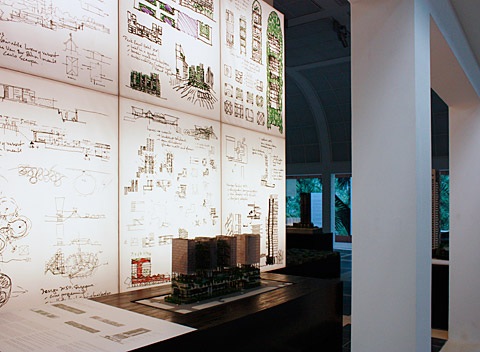 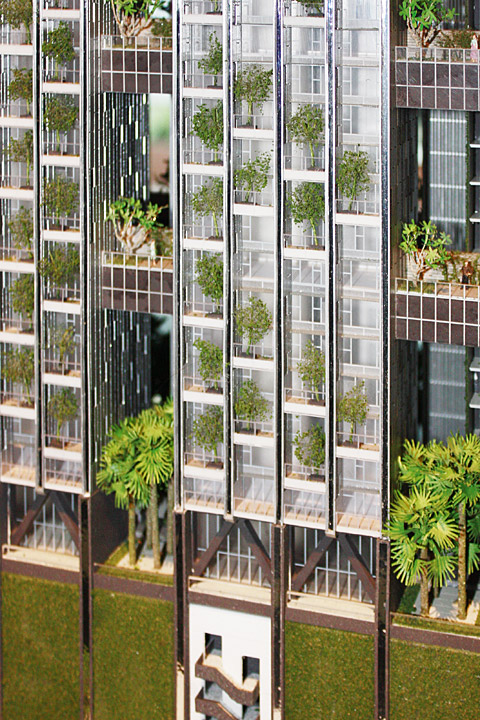 Detail view of a model of “The Met”: Living without air-conditioner by means of breezeways, photo © Nina Müller, Stylepark 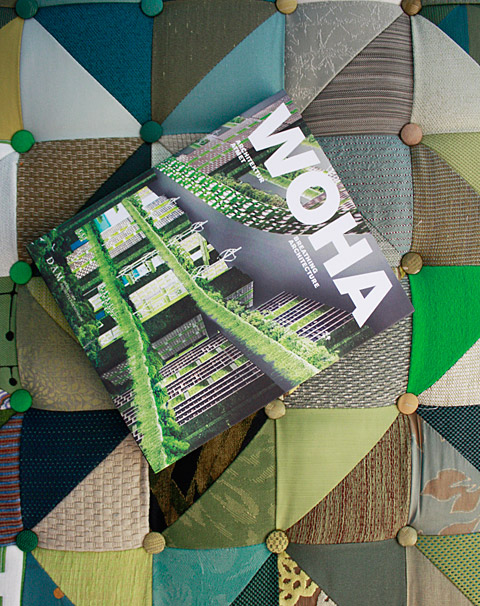