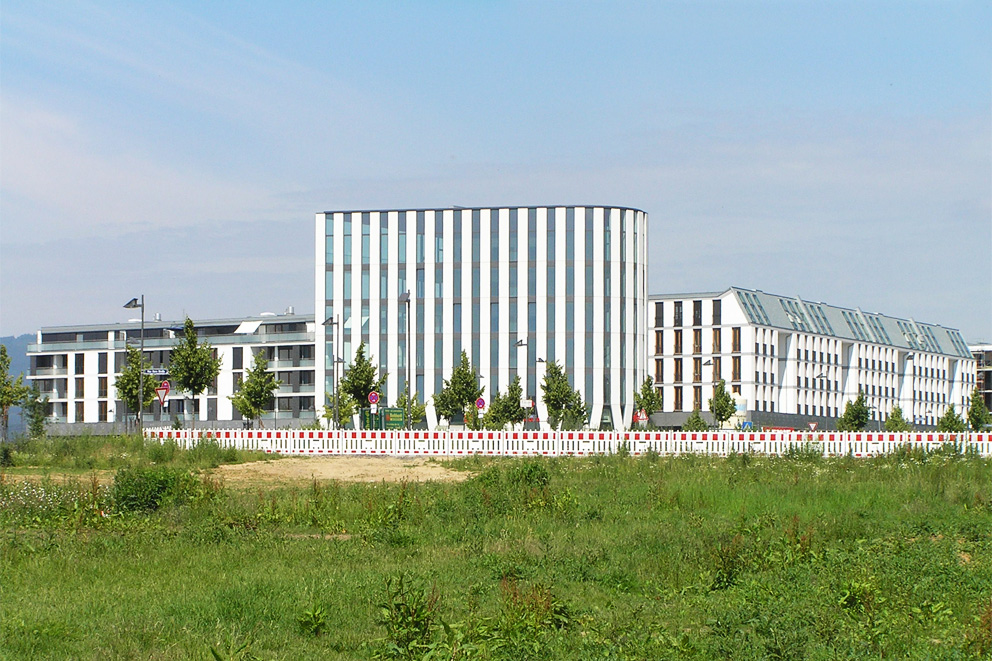 Riedberg in Frankfurt / M: In the centre of the city, there is no space for more apartments – therefore, the green corridor is very attractive for building owner.
Photo © Bulendam, Wikipedia.org

Many of our cities are facing a real challenge, namely housing shortages. Simply nowhere near enough apartments have been built, be it in Berlin, Frankfurt or Hamburg, and that was before the recent Syrian exodus. The ongoing influx of refugees threatens to impact heavily on already fierce demand for apartments, with the less fortunate in society being driven out onto the margins. At the same time, recently the merger of the two largest housing corporations in the country to form Vonovia SE was approved, and the unprecedented number of over 500,000 apartments will now soon be owned by one and the same company. Is the future going to be decided by the struggle between massive market muscle, on the one hand, and the re-emergence of state-subsidized social welfare building on the other?

Policymakers in Frankfurt, for example, have been racking their brains over how to accommodate the growth in the city’s population (all the inhabitants are of course welcome consumers and taxpayers). A fierce prototypical public debate has flared up between those wanting to build new housing estates in the greenbelt (the ‘Riedberg’ model) and others wishing to develop downtown brownfield sites and specifically achieve greater densities. The former camp suggests that it would be better to build outwards and more loosely together, to sacrifice greenbelt to an improved quality of residential life. Those championing the density argument point to the metropolises and megacities of this world, such as Singapore, where density is everything – and there were few green fields anyway. They say that to save travel time and fuel the obvious solution is build up and closer together. As with so many things, both sides are right and they are completely wrong.

The debate’s goalposts are placed such as to ignore the critical problem. Building takes time, if only because of the arduous planning permission processes involved. And as time passes, so both sides will find themselves facing another challenge, one that will be just as acute, even if it is one the political ostrichs have not seen because they have sand in their eyes. Namely climate change. Our world is growing warmer, whether we like it or not. The so-called Anthropogenic Age is only just getting going. Last November was warmer by about 4°C in Germany than at any point since meteorological records were begun, last December the record was up a further half a degree Celsius. Our cities are quite simply hotting up. European Environment Agency Director Jacqueline McGlade warned over three years ago: “Most Europeans live in cities, which can be extremely vulnerable to extreme weather events exacerbated by climate change… (and) are now facing impacts such as water scarcity, flooding and heatwaves, which are expected to become more frequent and intense than they are used to. Cities need to start investing in adaptation measures using ideas and best practice from around the world.”

The ideological trench warfare between the greenbelt advocates and the density protagonists is hardly the way to adapt. The former tend to favor the latest fashion: “active houses”? But will such structures generate enough power to drive the massive air-conditioning and refrigeration requirement new-builds will soon need, or will they perhaps not be active enough? The passive or active dwellings in the new suburbs tend not to be high-rises, but simply take away acreage that could absorb carbon dioxide. And the high-rises? Well, those greater-density structures that save energy actually block air-flow, rely on lots of glass & steel that heats up even more in summer, and ensure downtowns remain largely sealed surfaces – so that flash rains flood all the better. How, one wonders, should architects and city planners be responding and adapting – now?

Learning from Venturi, not from Las Vegas

The problem with architecture is that it often reflects what developers want, and that is rarely a choice informed by what Western cities need to look like in 20 years’ time. We need an architecture that minimizes water usage and maximizes flood protection, made with materials that withstand sudden storms and bouts of cold, but likewise stay cool when it’s hot. The common new solution of adding automatic solar shading to offices and high-end apartments is a classic own goal. When there’s a power outage because everyone jacks up their air conditioners at once, these smart buildings will swiftly look stupid. Ant not only do such systems send energy costs spiraling, the mass of those seeking housing at the moment will not be able to afford such buildings. Another common new solution: greened buildings. Such wonderfully overgrown facades and grassed roofs seem destined to become browned buildings in the summers ahead.

The housing shortage should be taken as an opportunity for a rethink of how we ‘do’ houses and how we plan cities. We need to fast square up to the trade-offs involved. For example, if we prioritize lots of public plazas in our cities, we need to revisit how we design them – flagstones and benches are all very well, until the heat starts blasting off the street. Maybe then sun-sails and small squares are the path to future public happiness. – Check out Italian and Spanish cities: no open space without an arcade…

Unfortunately, the politicians tend to opt for quick, failsafe solutions that bag them votes: quick-fix housing here and there. And do not actually change much. Meaning it is down to the smart urban planners and architects to do the adapting. The housing shortage and global warming in combination seem to be saying, and saying loudly: It is time to go back to the basics the way Robert Venturi did when he had his students scrutinize the Strip and design architecture for context. Today, though, we need to be learning less from Las Vegas. (Hey, Vegas is expected to run out of water within a decade and relies on about 20,000 kWh of electricity per inhabitant on a summer’s day – over four times the German average.) And start learning more from what we now know the future will be: Let’s respond to the future context.