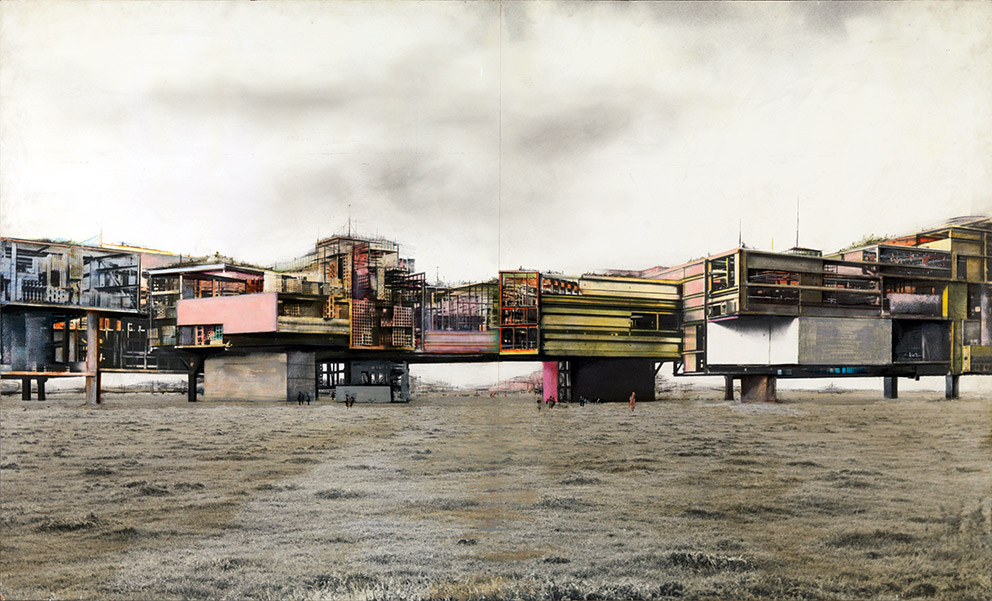 Back in 1974, Dutch artist Constant Nieuwenhuys cleared out his studio, in order to donate everything in it to The Hague’s Gemeentemuseum. Formerly a member of the CoBrA group, the artist now wanted to apply himself exclusively to painting. In so doing, he demonstratively drew a line under his research on the utopian concept of a “New Babylon”, which he had been developing for almost 20 years: Since 1956, nothing had absorbed him to quite the same extent as this vision of a new type of city, the laws of which would no longer be dictated by work and productivity, but by the nomadic citizen’s flexible and self-generative collective creativity and pleasurable playfulness as they roamed about town unfettered. The New Babylonians would be a post-capitalist homo ludens of sorts; in fact, they would be nothing less than a new kind of human. Thanks to technological automation, the society in question would have reached a degree of self-determination and leisure that allowed its members to apply the time thus gained to the collective design and constant development of their urban space.

The Gemeentemuseum has now brought Constant’s studio collection out from cold storage. And not for the first time: Since donating them to the museum Constant’s models, drawings, paintings and texts have gone on display at almost every larger exhibition addressing what the future may look in terms of design. However, possibly for the first time since the 1974 “overview exhibition” in The Hague, Constant’s ideas are now being presented in their entirety, which makes it possible to grasp them in all their many facets.
Even before coming up with the name and the project “New Babylon”, Constant had taken the leap from two into three dimensions: In the early 1950s he initiated projects in collaboration with Aldo van Eyck and Gerrit Rietveld that utilized monochrome color gradients for architectural compositions. 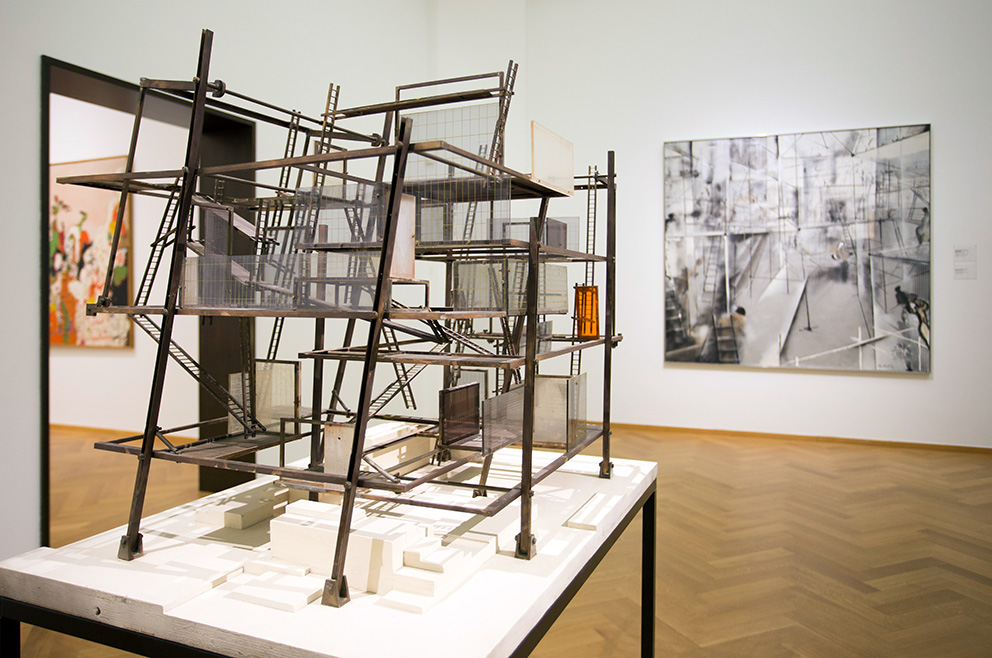 Systems for living in the future: The “Small Labyrinth” model of 1959 in front of the oil painting “Tribute to the Odeon” of 1969. Photo © Gemeentemuseum Den HaaD

From Alba into all three dimensions

In 1956 this venture led him to Italy to the small city of Alba in the Piedmont region: He designed a “mobile piazza” for a local Sinti group on the occasion of an artist conference attended by the French Situationists as well as some former CoBrA activists and the young Ettore Sottsass. The flat spanned roof, the model of which looks as though it has been made from several large spoke wheels, is a somewhat overly romantic embrace of nomadic life. But it is also the starting point for a whole series of dynamic, non-Euclidian sculptures that seem to intimate that Constant – gripped like most of his contemporaries by thespace Age – created them for the use in outer space.
It is only from 1959 onwards that Constant’s ideas return to earth, even if they are still hardly what one would call grounded: The individual city segments of his amorphously composed “New Babylon” spread across all city and state limits like a network, floating above the landscape while the existing infrastructure of cities and regions lies below. Incidentally, the choice of name, with its allusions to the work of Guy Debord, was intentional. The huge XXL floor levels then towered high up, atmospherically divided into separate zones by the varying yet always monochrome light entering the sometimes perforated, sometimes gridded Perspex levels like a colored fog. But Constant did not specify exactly how these spaces were to be structured or used. In contrast to the Situationists, he merely illustrated a spatial framework and in the following years, too, vehemently refused to flesh out the contents. His aesthetically extremely artistic models gave a great deal of leeway to the informal and unknown aspects of the future. The mobile ladders, ramified split levels and veritable labyrinths consisting of walls and doors do indeed seem like vast space playgrounds in need of being activated by their inhabitants. 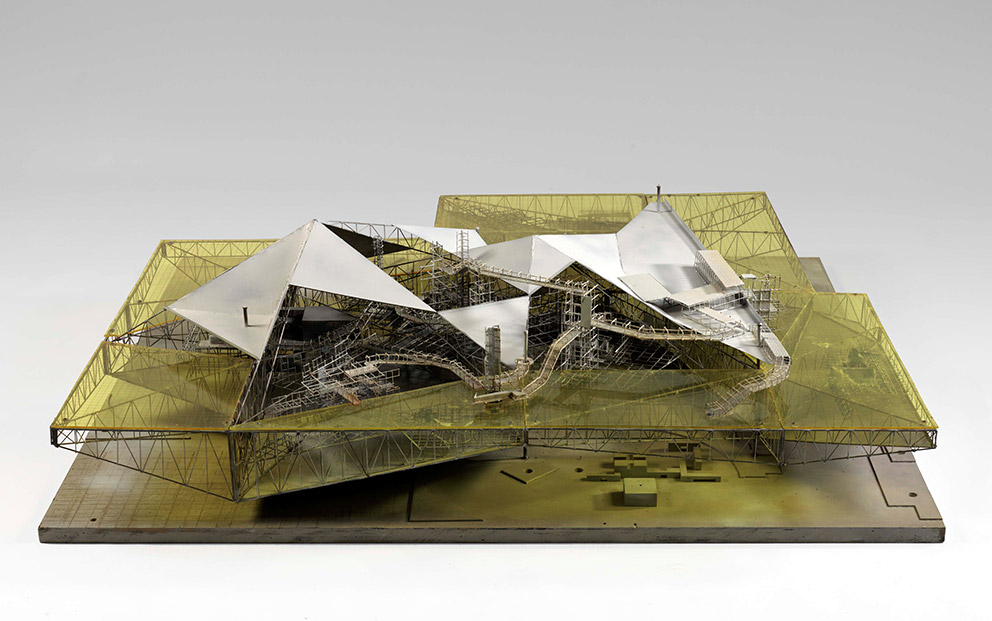 Even before 1974 Constant had abandoned the hope of his vision, which to him was always more of a social utopia than a technological one, ever being fulfilled his lifetime. Scenes of everyday violence and war had increasingly entered his paintings, the atmosphere in his artwork becoming further and further removed from the happily optimistic living environments of his homo ludens.

And today? Has the time for New Babylon finally come, as curator Laura Stamps wants to make visitors believe towards the end of the exhibition, by repeating in an imploringly optimistic tone: “We could be those others. To us. Liberty?” In actual fact many aspects of Constant’s utopian idea have long since become part and parcel of history, as the late New Babylon sympathizer Rem Koolhaas points out in an extensive interview for the exhibition catalogue. Paradoxically, this re-interpretation of Constant’s vision takes place under fundamentally changed socio-economic auspices: “The chaos that is the final destination of market economics is beautifully expressed in some of Constant’s projects,” as Koolhaas points out. And in the same way the global neo-liberal economy has since fostered the unplannable, chaotic aspect of urban planning, Koolhaas sees the homo ludens as already being amongst us: The phobia as regards has turned the office world upside down and it is now no longer only the large Silicon Valley companies who are keen to exclusively employ “fun people”. 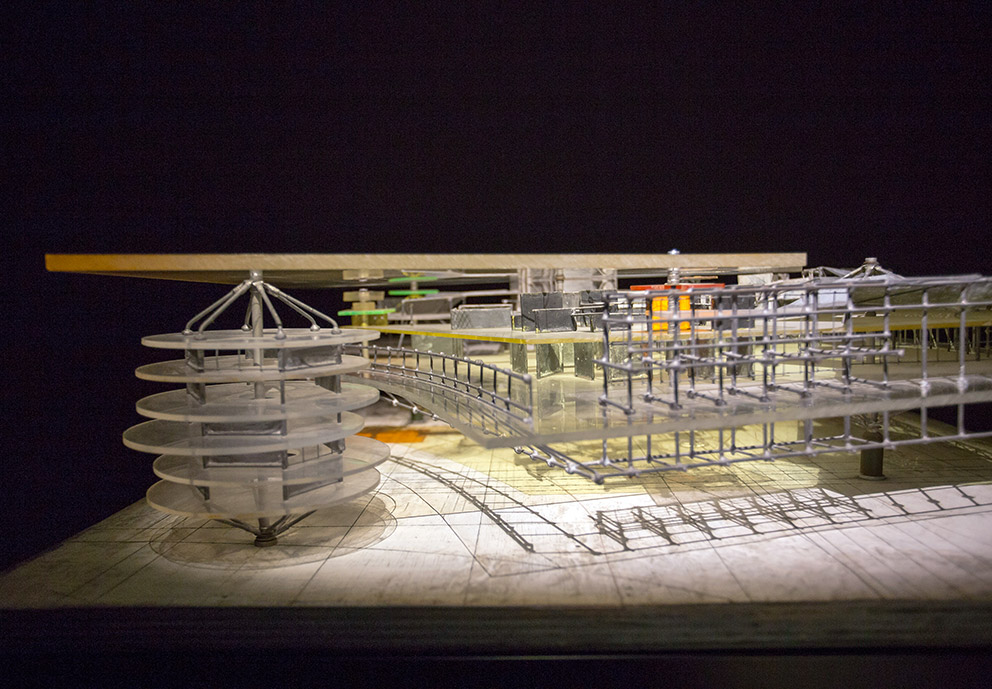 For almost 20 years, Constant devoted himself in drawings, paintings, texts and models to his “New Babylon” before in 1974 then handing over all the material to the museum.
Photo © Gemeentemuseum Den Haag

Yet these remarks in no way diminish the visual impact of Constant’s city models. A glance for example at Sou Fujimoto’s architectural vision suffices in order to clarify just how influential Constant’s architectural language was. His social utopia and totalitarian thinking when it came to planning may now be entirely outdated, but his dendritic network aesthetic certainly isn’t: In our times of rampant Retrofuturism, the models of New Babylon seem to have become a timeless cipher for the future. 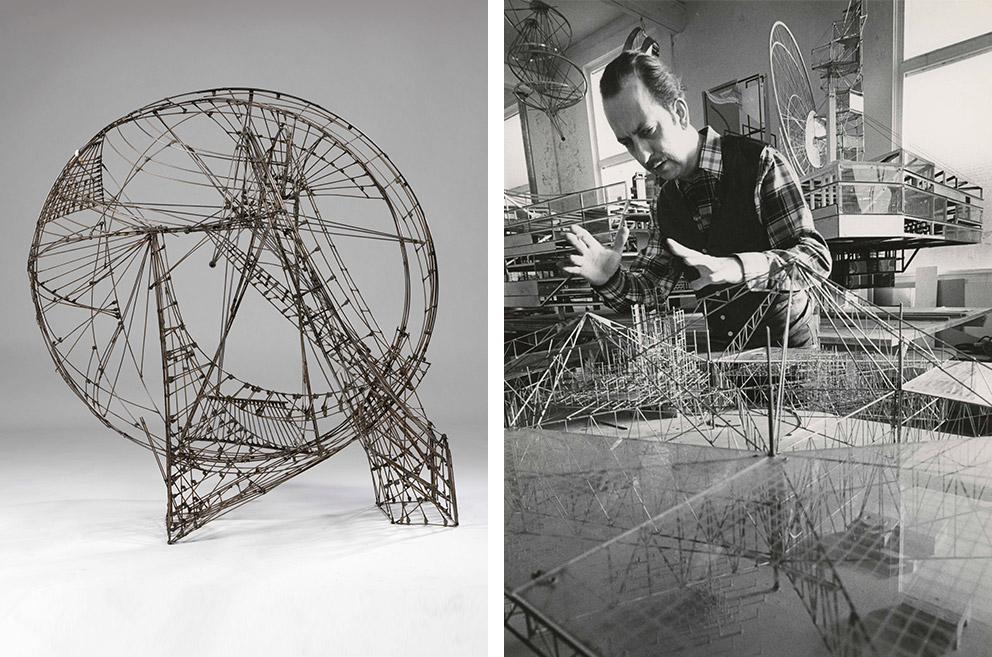 On the l.: The 1958 wire model of the “Space Circus”. Photo Tom Haartsen © Fondation Constant, Pictoright Amsterdam 2016. On the r.: Constant in his workshop, 1967. Photo “Untitled” from the museum’s collection © Leonard Freed / Magnum / Hollandse Hoogte 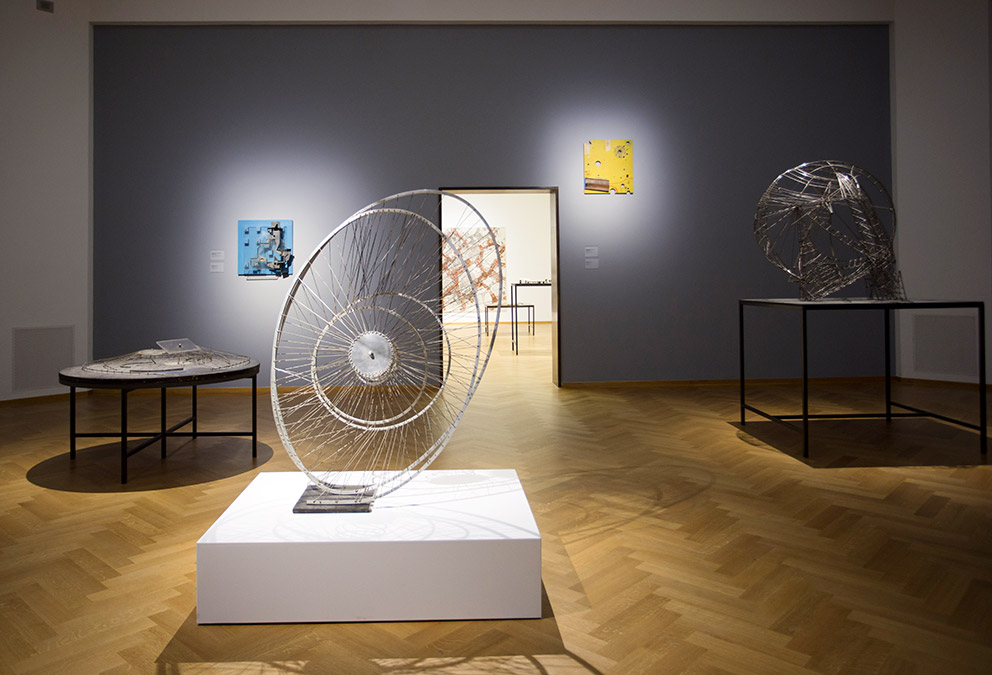 Among the wealth of materials on display in The Hague, for the first time since Constant’s 1974 “Taking Stock” exhibition, the genesis and full complex diversity of his ideas can now be traced. Photo © Gemeentemuseum Den Haag 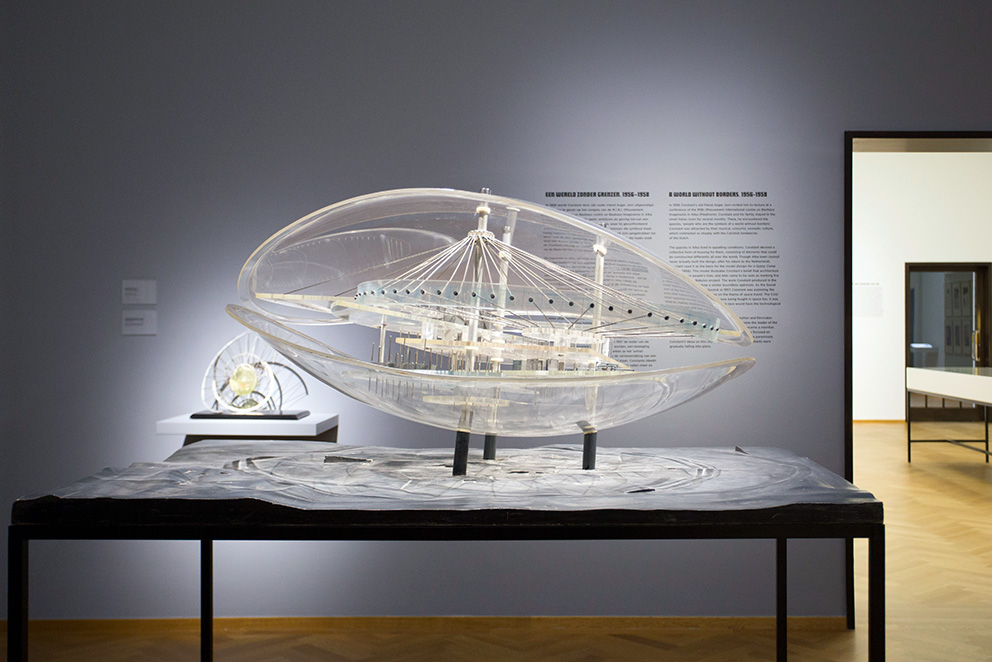 Like a space capsule above earth: “Spatiovore”, created in 1960. Photo © Gemeentemuseum Den Haag 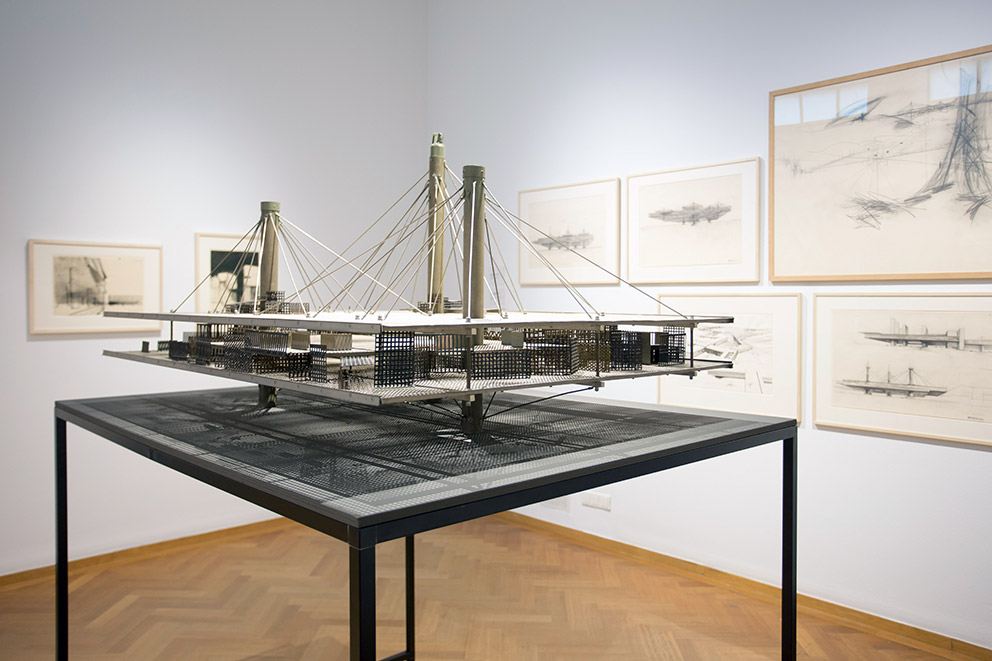 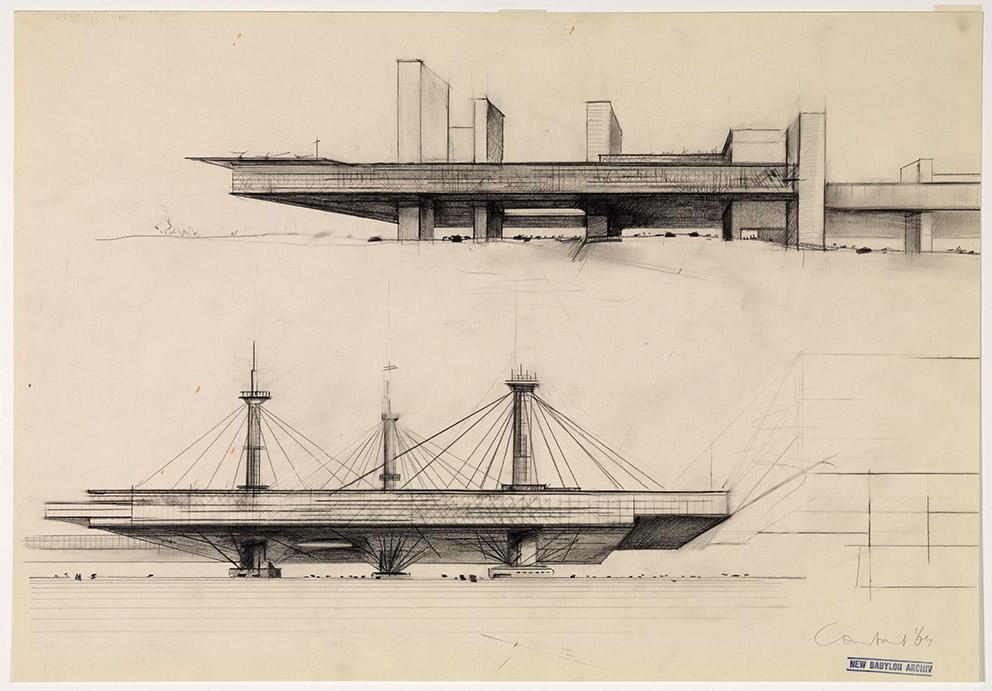 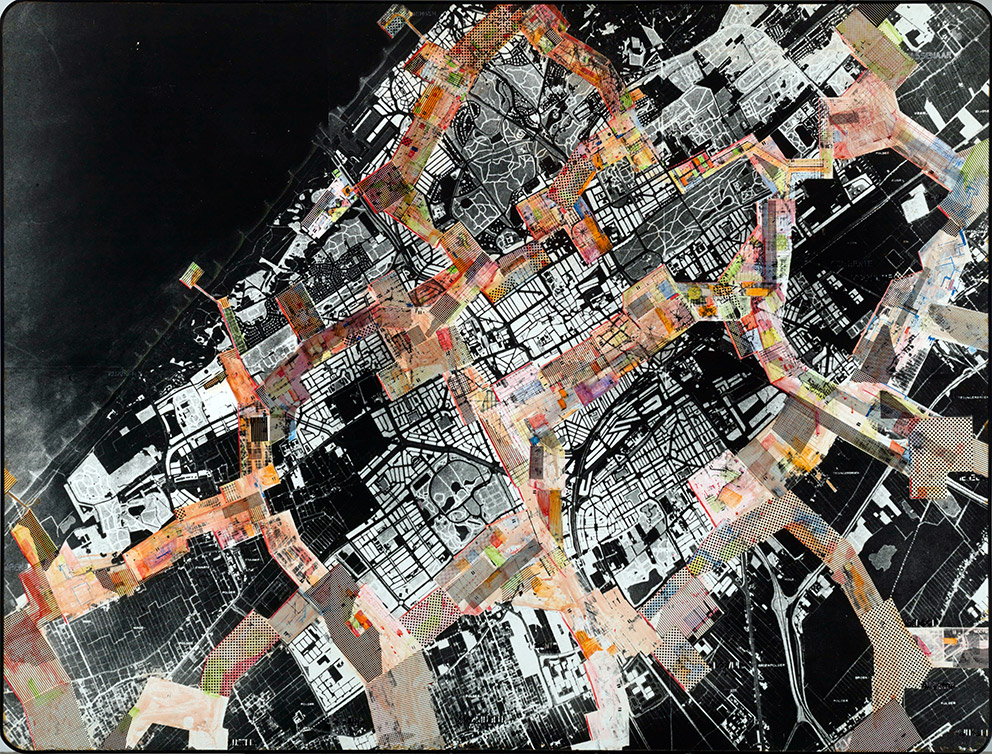