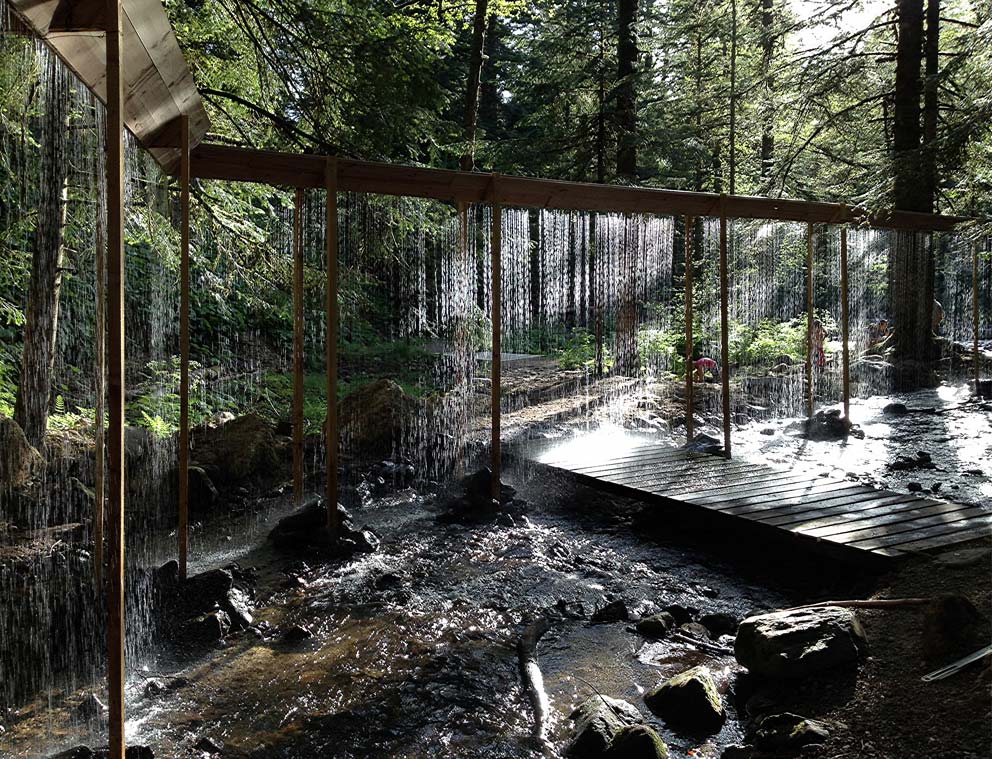 Elves’ shower or artwork? The “Voile de la mariée” or Bridal Veil is only one of eleven installations shown in the Festival. Photo © Louis Sicard

The green slopes and rolling hills of the Auvergne remind every J. R. R. Tolkien reader of the verdant landscape he created. A place where not only hobbits live, but stories are told about elves, fairies, dwarves or wizards. So it is hardly surprising that the Horizons festival “Arts-Nature” is held in the middle of the Central Massif at Sancy. Its initiators wanted the mystical nature to act as inspiration for the artists.

There is also something mystical about the installation by Louis Sicard: “Voile de la mariée” is the name he gives his pinewood construction from which water runs down at regular intervals creating the impression of a transparent, moving wall, which really does resemble the delicate bridal veil of a fairy – but could also serve as a shower for dwarves, elves and sweaty hikers.

At any rate the installation promises adequate cooling as the timber structure is 40 meters in length and winds its way between the pine trees and volcanic rocks of the national park “Volcans d’Auvergne”. Water is collected from a reservoir, which regulates the amount of water passing through the raised channel; a filter sifts out particles. The channel’s base is perforated with tiny holes on a one-centimeter grid. Sicard’s “Bridal Veil” will be shown thru September 28, 2014, when autumn temperatures will render cooling off unnecessary, and presumably elves will prefer to show at home.

Hot Spots – In the shadow of the giant mushroom: In the inner courtyard of the MoMA PS1 David Benjamin’s installation provides welcome shade in the summer heat, thanks to a weave made of thousands of microorganisms.
(08 August 2014) 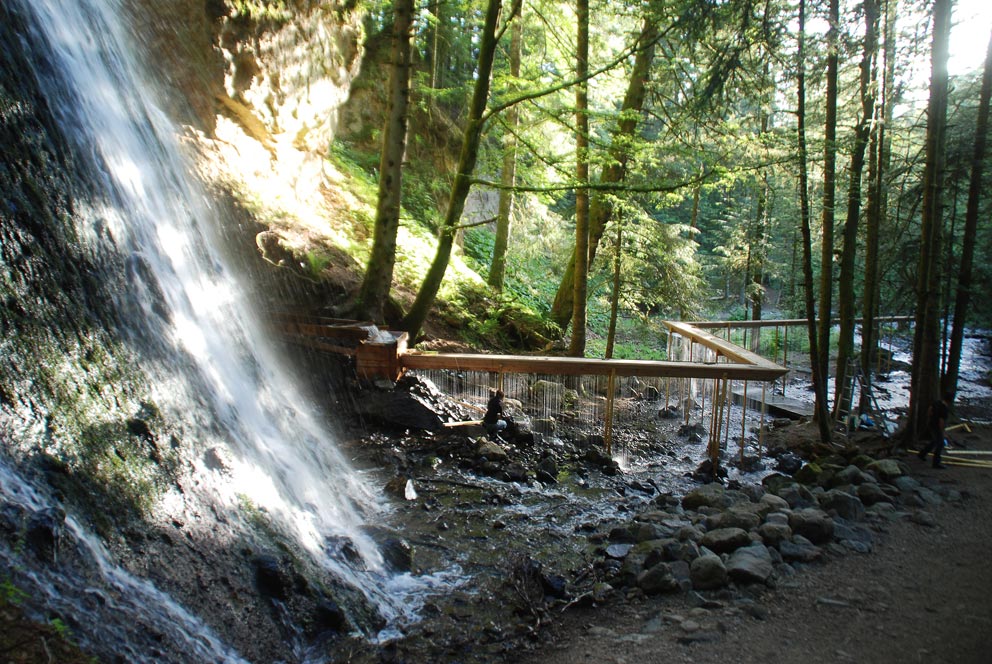 Around 200,000 visitors have come to the Festival so far to admire sculptures, installations and light art. Photo © Louis Sicard 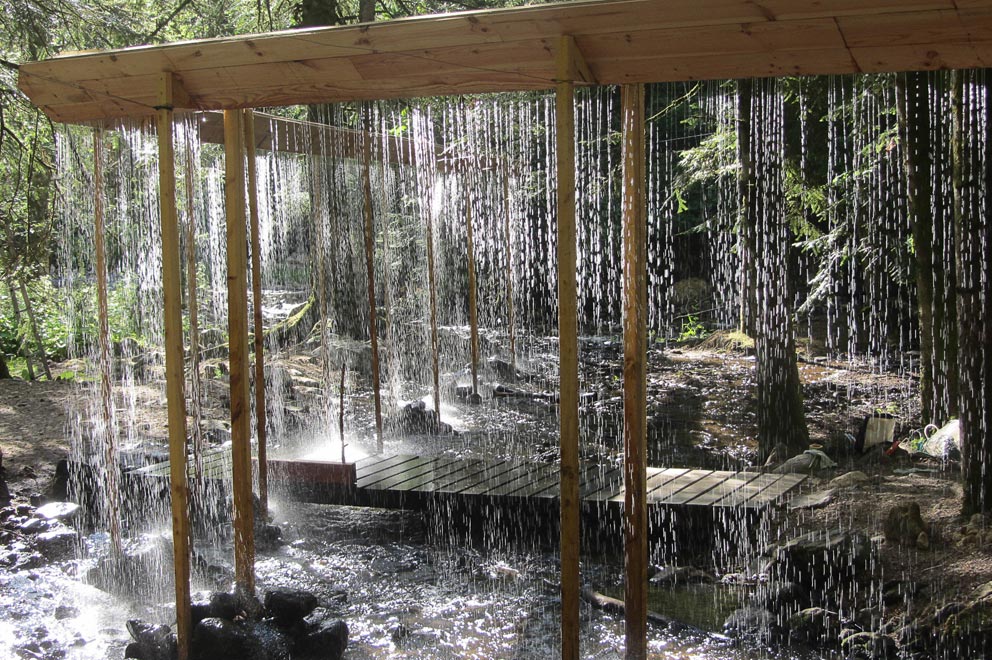 Shower suffused with light: Some sunbeams break through the foliage and are reflected in the water. Photo © Louis Sicard 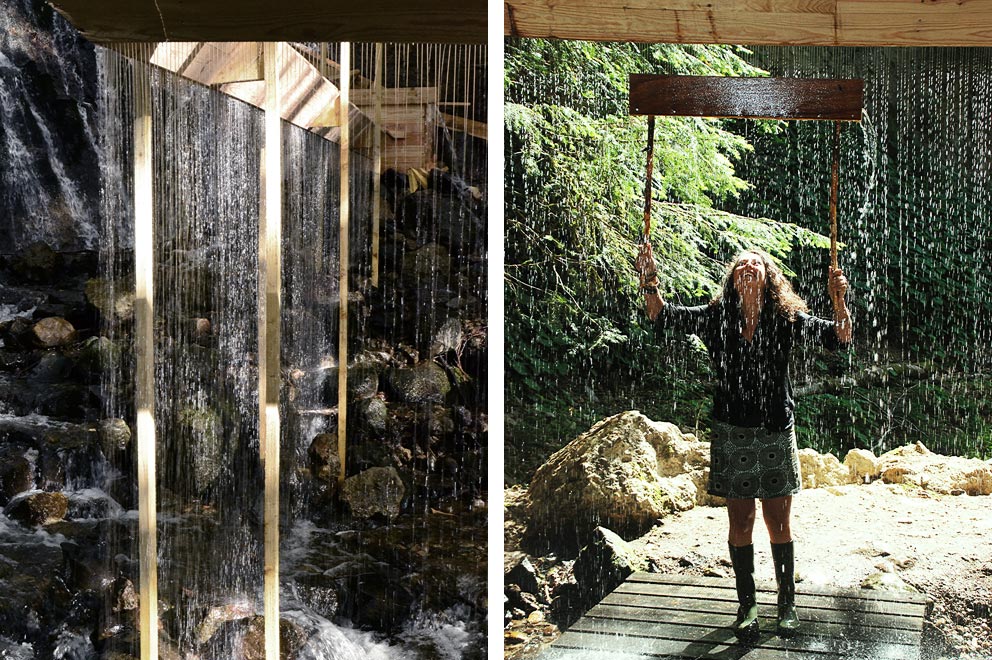 Visitors wary of water can negotiate the “Voile de la mariée” using a wooden shield as an umbrella and stay dry – in theory. Photo © Louis Sicard 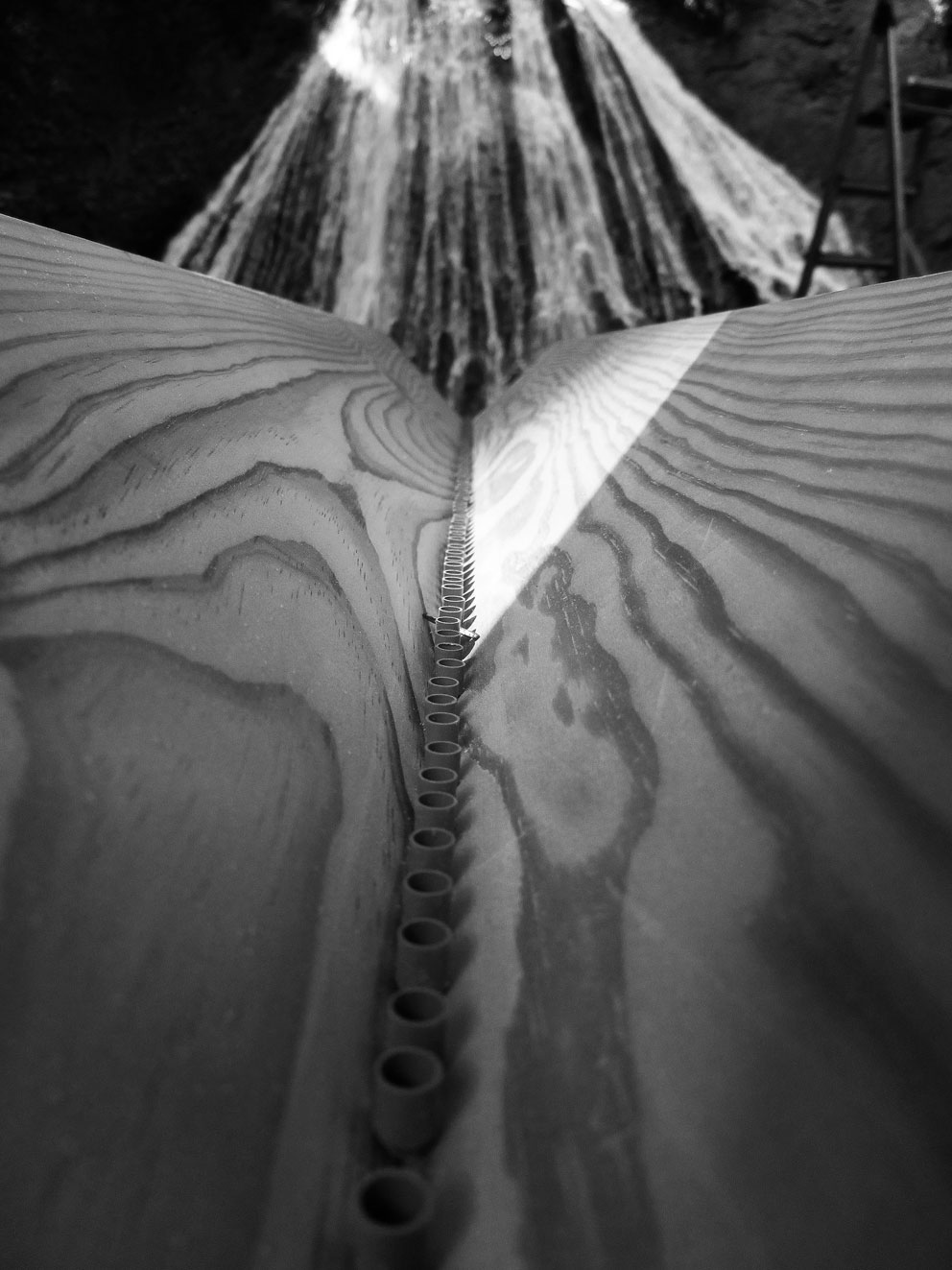 Perforations were made in the channel at spaces of one centimeter to ensure the water runs off evenly. Photo © Louis Sicard 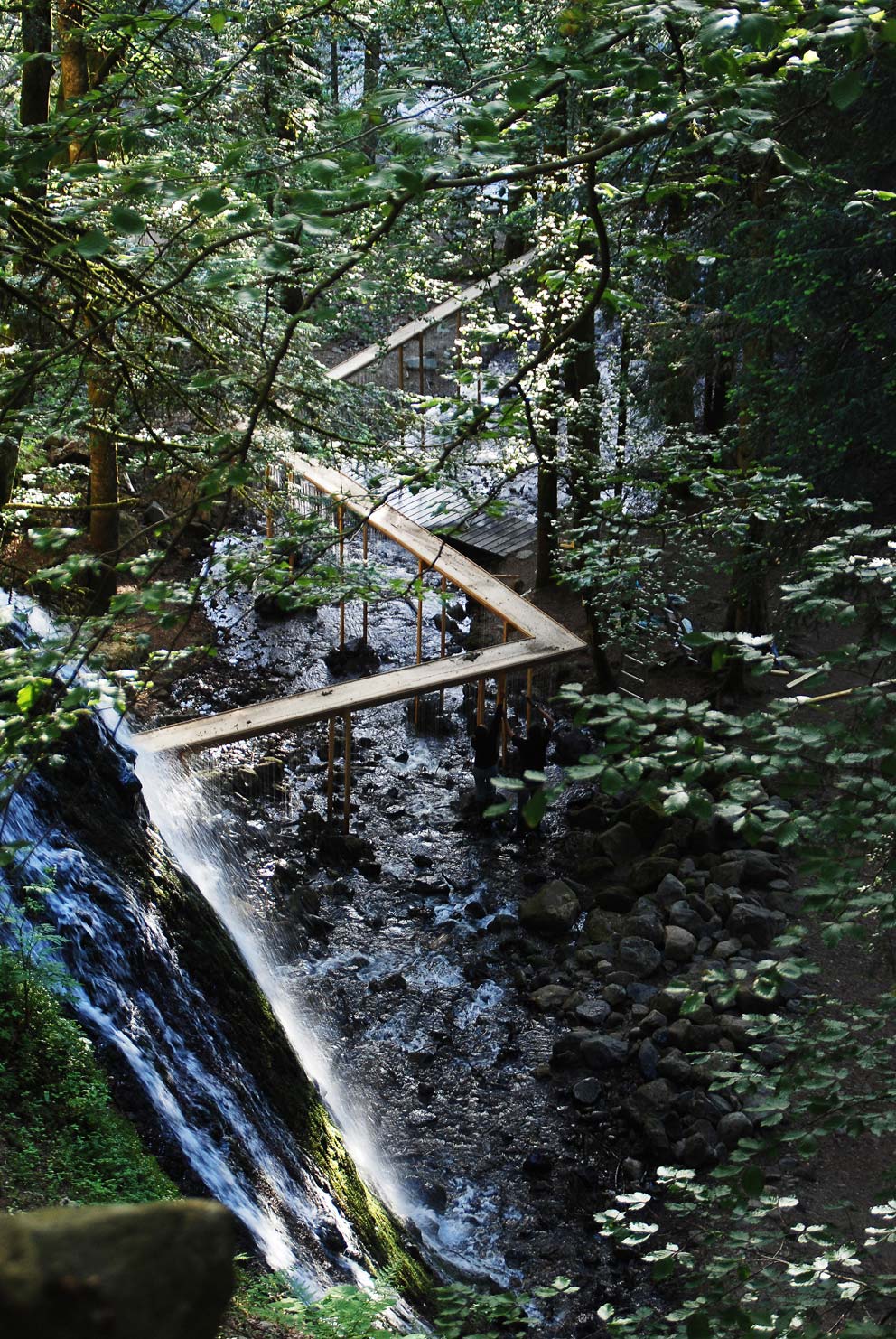 Water is collected in a reservoir from where it runs into the wooden channel. Photo © Louis Sicard 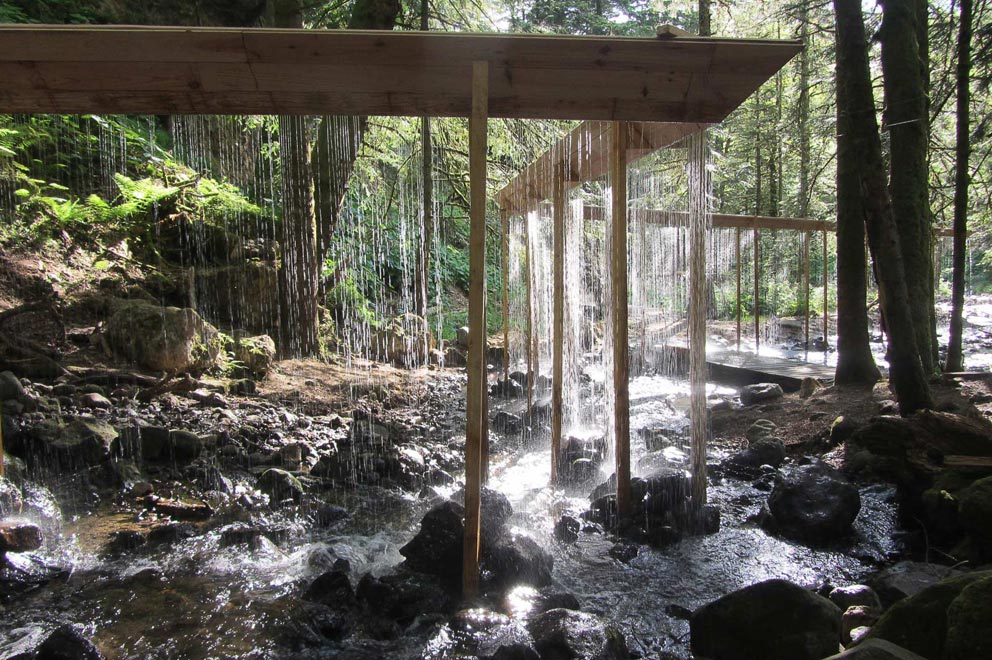