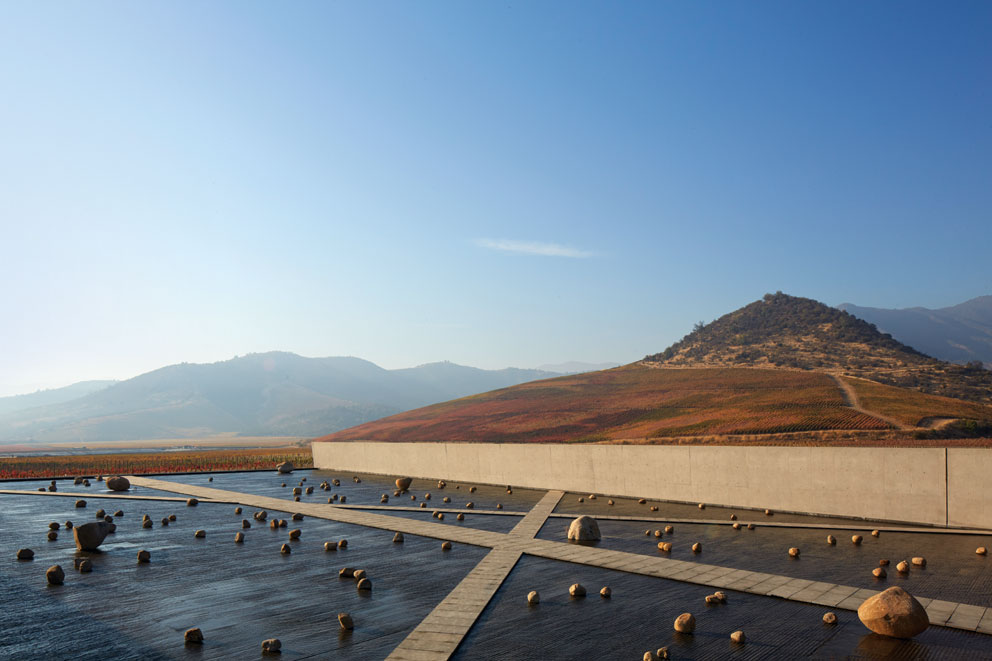 In Millahue, that “Golden Valley” 200 kilometers south of Santiago de Chile, on straddling a crest between the massive Andes mountains, at a point where heaven and earth meet, there’s a huge artificial pool, embraced by a wall. The surrounding peaks are reflected in the calm water and narrow paths crisscross the basin, and the boulders placed in the water seem almost mystical in touch. This extraordinary and zestful architecture forms the forecourt to the new VIK vineyards and clearly bears all the hallmarks of the work of Chilean architect Smiljan Radić and his wife, artist Marcela Correa. And it amounts to Radić’s third miraculous building this year, following the Serpentine Pavilion in London and the bus shelter in Krumbach in Austria’s Vorarlberg.

In 2007 Radić won the competition to design the new vineyard for the VIK Group, which is run by hotelier and art collector duo Carrie and Alexander Vik. For three years they all chiseled away at the concept that was destined to intervene as little as possible in the countryside of the Millahue Valley and yet enable an ultra-modern technical plant meeting the latest oenological standards.

The result is stunning, and typical of the oeuvre of 49-year-old Radić, who always grasps architecture as a coefficient of the context and seeks to create structures based on a direct experience of nature. Thus, the boulders in the expanse of water are all local in origin, an element, as Radić puts it, that is intended to bring to mind the contrast here between today and eternity. At the end of the forecourt, the main building rises up, whereby the interior is suffused with natural light thanks to the translucent fabric used to span the bright, curved roof. The wine is stored in large steel tanks in the catacombs beneath the forecourt, an ingenious architectural solution that also saves energy. The natural temperature in the underground halls is a pleasant 14°C, and the flowing water above provides additional cooling, all of which fits into the vineyard’s philosophy on sustainability.

However, perhaps it is not only the pleasant ambient temperature that protects the guests (who can reside in the “Viña Vik” Hotel nearby) from getting to hot and fidgety, but also Radić’s tranquil architecture itself. Because he seeks to create havens that are decidedly untechy, places that are almost silent in reverence. For that, Radić says, is the “greatest conceivable luxury today”.

Hot spots: In the shadow: In the inner courtyard of the MoMA PS1 David Benjamin’s installation provides welcome shade in the summer heat.
(08 August 2014)

Hot spots – a pool in the desert: Life is pretty hot in the desert, at least during the day. So what could be more handy than a pool to cool off in.
(30 July 2014) 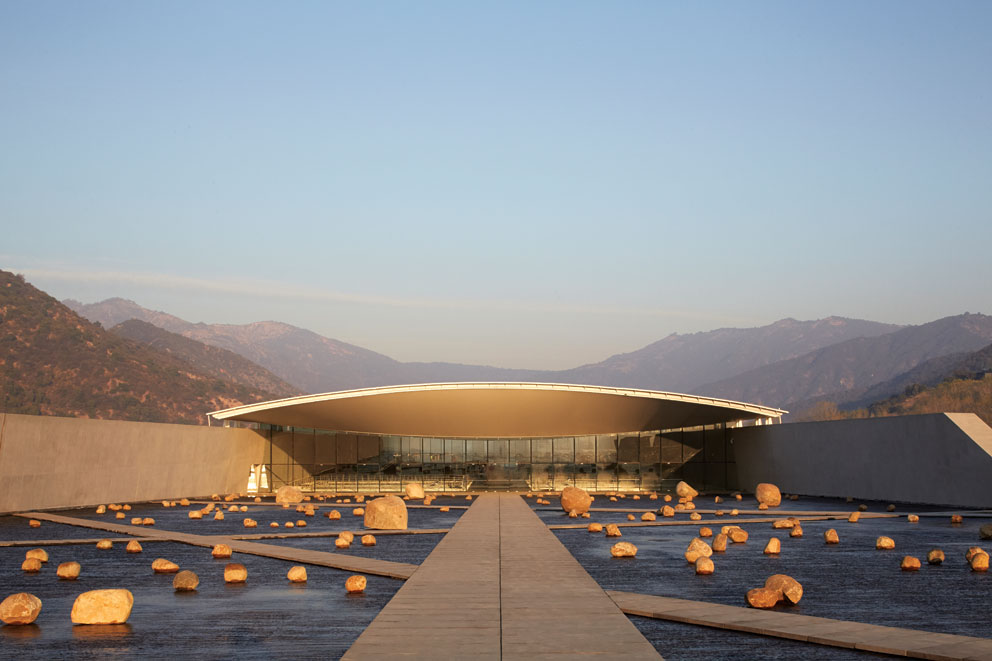 The wine is stored in large steel tanks in the catacombs beneath the forecourt, the flowing water above provides additional cooling. Photo © Cristobal Palma

The main building rises up, whereby the interior is suffused with natural light thanks to the translucent fabric used to span the bright, curved roof. Photo © Cristobal Palma 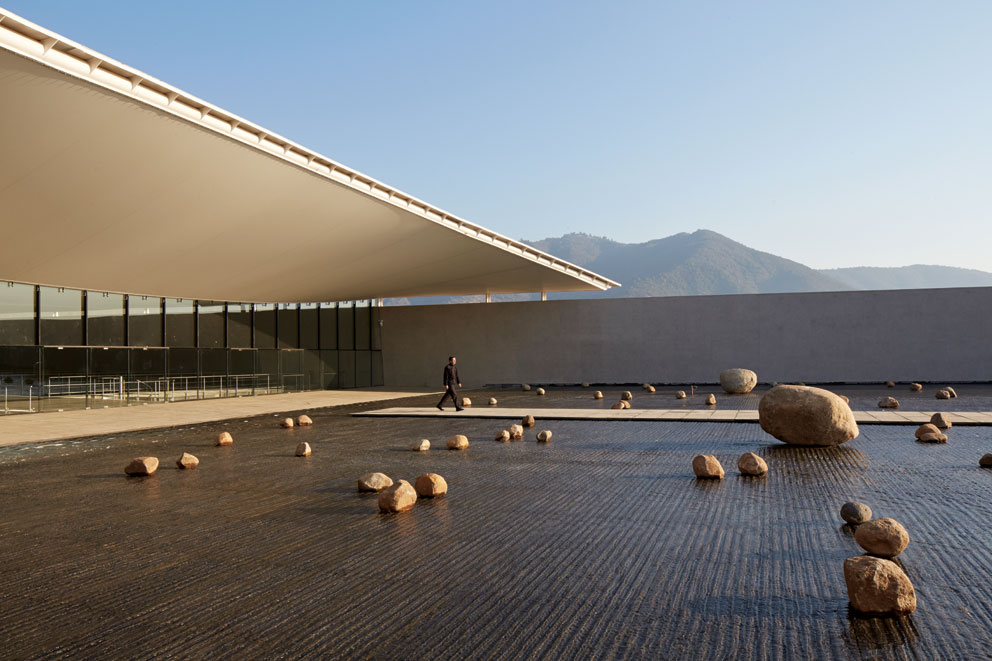 Oenology and ecology: the concept was destined to intervene as little as possible in the countryside and an ultra-modern technical plant. Photo © Cristobal Palma 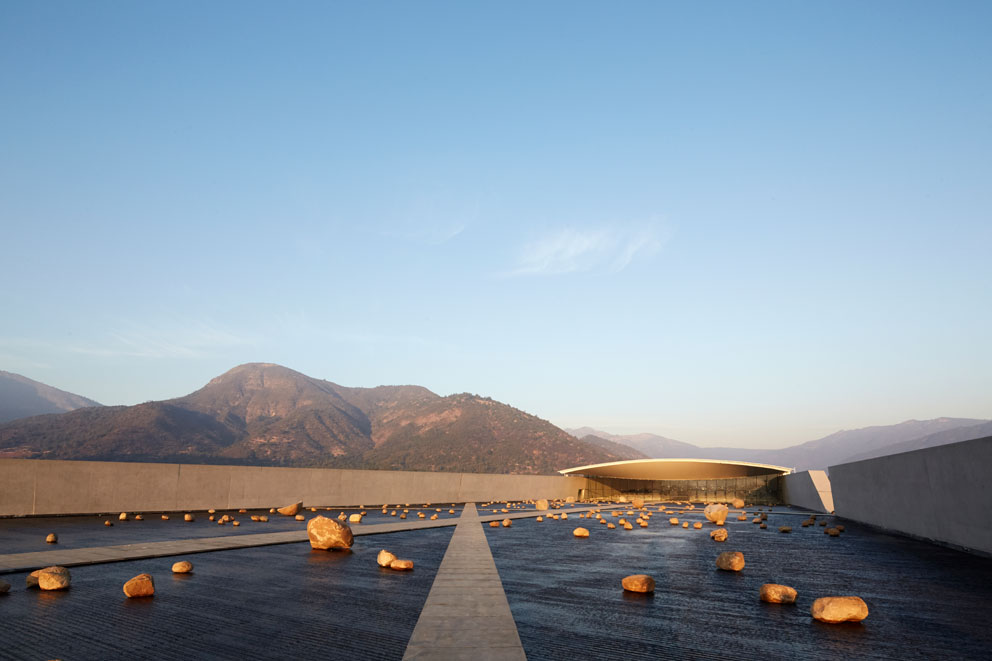