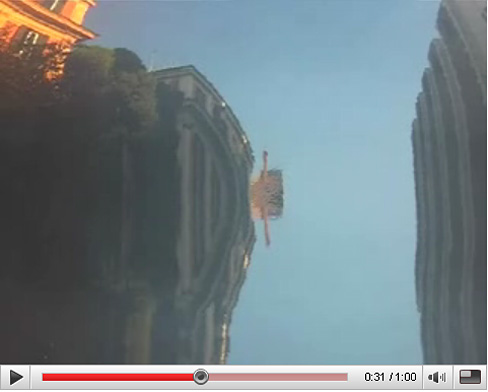 We do not believe our eyes. Suddenly the picture starts moving, the façades start to dance, tumble and run. Immersed in ochre and umber, they go on their way. Houses swell up in front of the desert of the sky, others shrink into one another in one go, as though they were simply swallowed up by the blue or pulled under a blue covering by an invisible hand. Then we see the tips of palm trees and pines – and they too tilt into oblivion, with the noise from the streets washing around them. Then the image stops, pauses, and with it the façade of a Modernist building, which was just stretching, as though it wanted to go back to the Baroque. Actually, all the images in Christoph Brech’s film “Punto” suddenly become “barocco” – something strange and crazy, as crooked as irregularly shaped pearls.

Gradually the observer realizes that he is probably looking in an animated, concave and convex mirror, a traveling ghost mirror, in which the buildings thumb their nose at the style and their architects. Off-screen we hear mopeds and Vespas getting closer and disappearing again at once and we understand that Christoph Brech only needs a Fiat “Punto” to transform the city into a Baroque phantasmagoria. No more than a piece of industrially formed sheet metal is required and spaces and times blend in the course of the images. Until the city dissolves – into the deep, deep blue of the sky. Until we follow the images like a river. Until we leave everything behind us which our eyes normally blur out, so that we can immerse ourselves in a deepness which owes its existence to nothing but a surface.

The films “Ritratto Romano” and “Break” by Christoph Brech will be on display until September 21 in the exhibition “Favoriten 08 – Neue Kunst in München” at the Kunstbau, Städtische Galerie im Lenbachhaus in Munich.