One might think that gatherings of eloquent speakers and thinkers would, by their very nature, tend to put out joint declarations. In an age when the yardstick for opinions, arguments and themes is the amount of attention they succeed in generating, what counts is not just how productive the exchange of views has been but also the availability of a presentable report of what has taken place, for which read a jointly formulated declaration, a model, vision or agenda. But politics isn’t the only area where this type of joint declaration usually comes down to the lowest common denominator and turns out to be so vague and trite as to beg the question of whether it illustrates anything more than just a widely shared concern or good intention.

From 6 to 8 August, a group of experienced, German-speaking designers got together for the 1st Starnberg Discussion Round, the tagline for which was “How much design can the climate support?” The objective, after taking stock and critical discussions, was to formulate a “Starnberg Agenda”, which would help to define the professional body’s future remit. These high-profile, international, elder statesmen of design, all of whom formerly held top positions and some of whom still work as consultants, university lecturers and designers, expressed their opinions on topical economic and social issues.

According to a press release from the iF, International Forum Design GmbH, the designers invited to the meeting, and Florian Hufnagl, head of the “Neue Sammlung” in Munich, whose role as a guest was to establish historic references and a future viewpoint, called on players from the business world, politics and the public to involve designers to a greater extent in the development of major future technologies. Some examples mentioned were solar installations, wind turbines and improvements to the quality of light produced by energy-saving light bulbs. Young designers were also encouraged to pay greater attention to these issues.

Only time will tell if necessity is really the mother of invention as communications designer and university lecturer Thomas Rempen believes. It would appear that, in Germany, necessity is still in short supply and, in a world of global capitalism, moving production facilities to low-wage countries promises greater profits than sustainable manufacturing. Nevertheless, designers can undoubtedly make a contribution to the development of ecologically sound, energy-efficient production processes but this would require a rethink on the part of engineers, sales and marketing, over which designers have only limited influence.

It is also doubtful whether the competence of the creative brains really lies in being “the generator for life enhancements”, as Rempen believes. If design were as monstrous as this neologism, it would scare and frighten us. But even without a generator, design-driven life enhancements are probably more the stuff of legend. “We designers have to be vigilant, fast and creative and get more involved in the development of better, less harmful products”, demands Rempen and nobody would contradict him. But what does better mean? And who actually considers something harmful? At least the information that this also and specifically applies to the car industry, which is called upon to push low-consumption and, consequently, attractive new models and drive technologies is nothing more than a platitude, which definitely won’t make anything better or less harmful.

Nevertheless, within the Guild, we do seem to be more aware of the consequences of our actions and no longer rubbish the responsibility we all bear for developing products, which have a negative impact on climate during production. “In the past, we have also helped questionable things to sparkle and, occasionally, have even made them sexy” admits Herbert H. Schultes, former head designer for Siemens, who now works for companies like bulthaup. Admittedly, the resulting design concept is rather old-fashioned. On the other hand, everyone has to agree with Schultes when he states that: “The ideal design type is extremely long-lasting and high quality. What initially seems expensive is, in fact, its special value. However, design quality and CO2 emission reductions during production and consumption is the way forward.”

Hans Theo Baumann, co-founder, together with six colleagues, of the Association of German Industrial Designers calls for, “the professional image of the designer, which we have developed, to be changed and expanded as the function of design expands and changes”. But he can’t resist self-aggrandisement either: “We had the courage to develop our products even in the face of opposition. The customer was always decisive. These days, young designers need to have the courage to stand up for environmental interests. And there’s plenty of work to be done as far as the environment is concerned.”

Franco Clivio, who works for companies like Gardena, Lamy and Erco and teaches design in Venice, also supports a new partnership: “In the past, businesses who were impressed with our concepts and ideas were our partners. If they collaborated with us, we made them successful so they respected us”. So it follows that, in the future, designers will need to focus more intensively on seeing engineers, developers and constructors as partners, so we can work together to create good design. Engineers will become “design associates”.

The final draft of the “Starnberg Agenda” reads as follows: “Whereas, in the past, form formulation was more important for design, these days for us, as designers, presenting something as an economic miracle and the “Made in Germany” image is more important. We are entering a new phase: indicators, such as the dramatic rise in the price of oil or the water shortages now apparent, highlight a new need, which by necessity will make us more inventive.

In the role of generalist, a designer has a new opportunity, a new function, he must assume the role of creator of exemplary problem solutions and offer form formulations, which enhance the appeal and desirability of innovative ideas and products for the new era.

It is more imperative than ever to work closely with technicians. In our global, networked, knowledge-based society, technology is developing at breathtaking speed in every sector. In the role of generalist, creative engineer, life enhancement generator the designer is in pole position. He turns the obvious into something conspicuous and pleasing.”

So far, so good! Or maybe not! You might find it reassuring that designers have also woken up to the fact that the price of oil is going up. You might find it less reassuring, however, that the first oil crisis was over thirty years ago and that those who subscribed to the future and to world improvement have failed to do anything, just like the politicians. And, as far as their demand for “closer collaboration with technicians” is concerned it would appear that the discussions at Lake Starnberg have totally forgotten that design and technology have always been interrelated and closely correlated with new developments. Charles Eames or Raymond Loewy could undoubtedly have explained this to them.

Some expressions and phrases of this “Agenda” tell us that the specialist knowledge of these gentlemen should not be overestimated. Some of those who started in pole position found themselves in the pit lane at the end of the first round with an engine blow-out. However, designers will only fail in their future role of “generalists” and “creative engineers” if, in this function, they lack the expertise to assess the cultural as well as the economic and ecological consequences of their actions. Making something “distinctive and pleasing” will not be enough in an age when design essentially means designing the invisible, even if at the end of the day, the object manifests both. Products must also be meaningful in the future. However, this calls firstly for a change in intellectual production from a purely aesthetic or economic to enhanced cultural value.

So, after this faltering start from the top ranks, we eagerly await the next step. The “Starnberg Discussion Rounds” are set to continue and participating designers intend to get involved in design and climate change in the future. To start with, in the autumn, the documentation from the 1st Starnberg Discussion Round will be published as a book, which is being produced in collaboration with design journalist and author Thomas Edelmann.

Graphic designer, typographer, author, lecturer and consultant Kurt Weidemann emphasizes: “This wasn’t a talking shop”, before going on to promise: “We will get stuck in with specific projects.” Please do so. What we want is greater precision and less agenda. 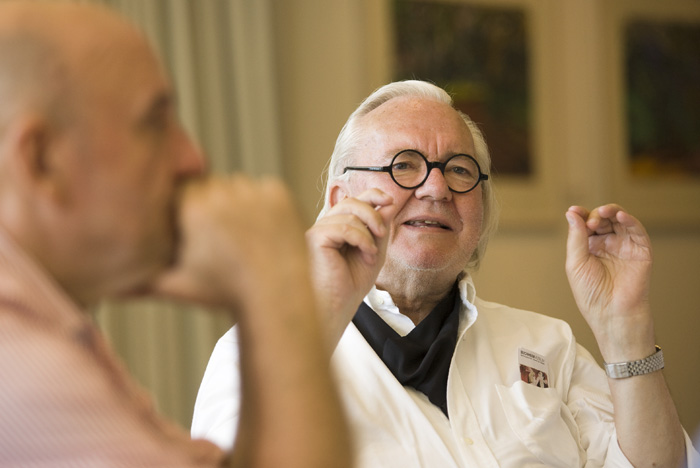 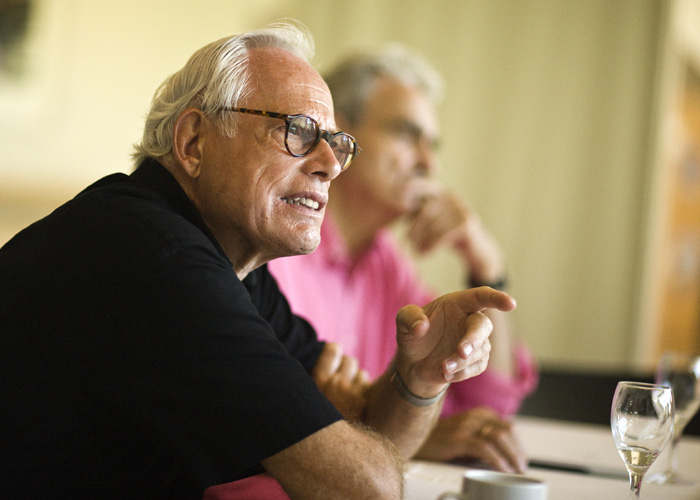 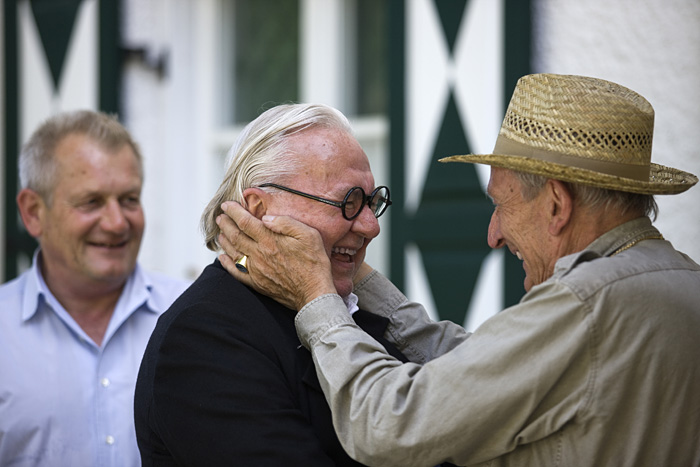 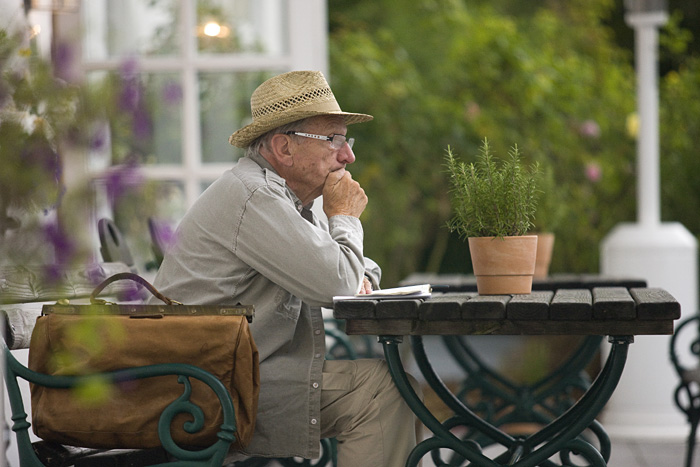