top
How the office became what it is today
von Mathias Remmele | Oct 22, 2012

Surprising as it may be, the history of the office and its design has not yet been written. Because if one considers that in the industrialized countries, far more than two thirds of people spend their working lives in offices of one sort or another, then the subject is certainly not without relevance. So why the astonishing lack of interest among design historians and publishers in the emergence of office design? Is it perhaps attributable to the fact that most people do not love their office workstations? Or to the fact that the design of office furniture almost always foregrounds functionality and economics, and emotional aspects play a subordinate role? Or to the fact that it is always only innovative products make an impact on the office furniture market?

It bears stating here that quite unlike old apartment furnishings images of historical office interiors normally do not kindle enthusiasm. While famous residential interiors can still seem very stimulating and even contemporary after 50 or 60 years (one needs think only of the Eames House and the other legendary case study houses in the United States), office rooms and furniture of that epoch seem almost Stone Age in terms of rigidity and sterility. From today’s viewpoint, they seem almost embarrassing, like a more unpleasant memory of a long surpassed stage of development. This would seem to be borne out by the fact that in the domain of office furniture there are none of the “icons” and enduring “classics” that are increasingly important in the market for residential furniture. And the issue of “re-editions” so important in the context of “classics” thus at best plays a marginal role in the office market. Admittedly, there are a few famous items of office furniture that have a firm place in design history. Such as Henry van de Velde’s dynamic curving Art Nouveau desk of 1899 and Marcel Breuer’s tubular-steel desk “B65” of 1930. Not to forget George Nelson’s “Home Office Desk” of 1947 and even more so his bureau desk from the “Action Office 1” series of 1964 can be considered examples of this category. But do these models have any relevance today other than in historical terms? The Eiermann desk could be the notorious exception to the rule, but strictly speaking it is not office furniture in the classical sense.

The relative short service life of office furniture can be explained above all by their extreme reliance on technological developments. The typewriter desk is an outstanding example of this. Far smaller and lower than modern desks and connected to the later since the 1950s usually in an angled configuration, in arose about 1900, when the typewriter emerged as the most important item of office equipment. This furniture type was for many decades a firm, in part even central part of the office interior, it disappeared as it were over night when in the 1980s the PC started to gain sway in the office world. The printer table gave it back a brief lease of life, but now these once to indispensable little tables are become as good as meaningless and useless.

Notably, the design of offices and office furniture (quite apart from the ostentatious executive office and grand bourgeois studies) was for many years practically not a matter for important designers. Pioneering work was done here by Otto Wagner with his Postsparkassenamt for Vienna in 1906 and Frank Llyod Wright with his “Larkin Building” in Buffalo, made the same year, and the “Johnson Wax Building” in Racine in 1939. Both were concerned less with developing new office concepts and more with the wish to design an office building as a gesamtkunstwerk with furnishing that fitted the architecture.

Not until the middle of the 20th century did designers start to focus on the office. George Nelson was the first to recognize the importance and market potential of the issue, who was at the time head of design at Herman Miller. In 1947 as part of Miller’s “Executive Office Group” he invented the first modern “Workstation” and in the early 1960 together with Robert Probst he developed the revolutionary “Action Office 1” program. On the one hand, the idea was to consider employees’ physical and psychological needs (e.g., by means of furniture that allowed for different working positions) and, on the other, to streamline workflow. This continues to this day to be the thrust of high-quality office furniture programs.

Until the mid-20th century, for a growing number of employees the office means working together with others in a large room. The notorious and still little loved open-plan office was initially a purely economic invention. Working halls in which in a very confined space a large number of employees discharged duties that were often repetitive in themselves spared employers’ wallets and ensured maximum control of the staff. Billy Wilder created an unforgettable image of this kind of open-plan office in his 1960 movie “The Apartment”.

At about the same time, the German planners at Quickborner Team proved that the open office can function quite differently, by inventing the office landscape. With substantial consequences. The goal was to break the rigid and in many cases ineffective structures of large bureaucratic organizations open and to design the spatial organization of the office in line with the workflow and internal communications needs. It was a compelling idea and swiftly spread worldwide. Most consider Robert Probst’s “Action Office 2” for Hermann Miller, a great commercial success, to be the first office furniture program to be almost optimally aligned to this new form of office organization. The modular furnishing system, which did justice to a wide range of functional requirements and also enabled countless different spatial settings, was the benchmark through to the 1980s. Alternative furniture programs by other manufacturers (and they soon appeared) may have stood out aesthetically or for technical-constructive details, but the fundamental idea always remained the same.

The next part of the article will deal with the question, why the office is, what it is today... 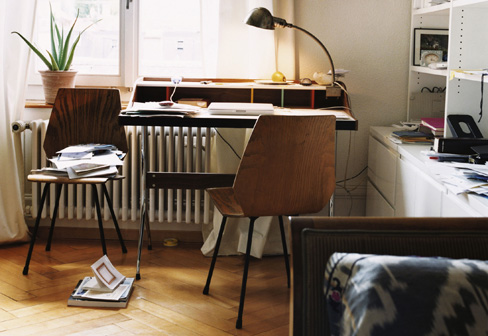 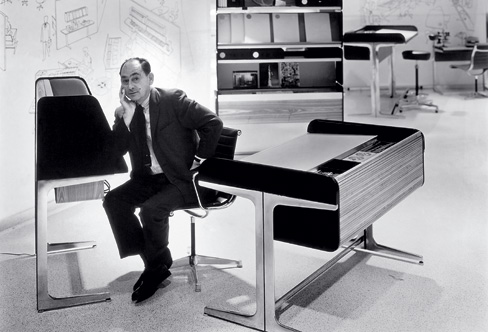 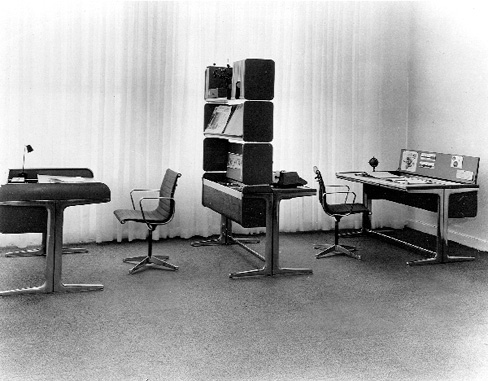 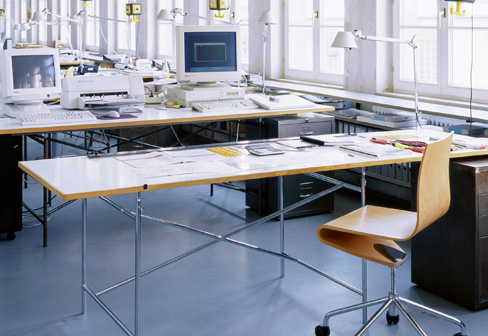 Originally, Egon Eiermann created this table frame from 1953 for his own office, photo © Lampert 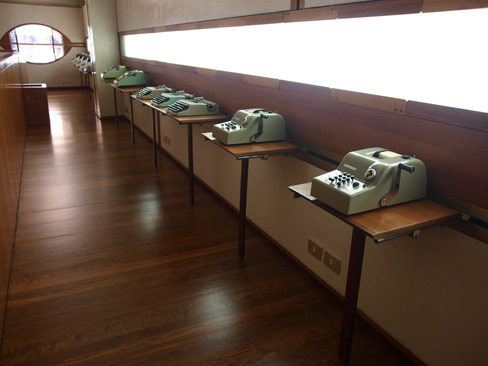 Historic typewriter desks at the Olivetti showroom in Venice by Carlo Scarpa in 1958, photo © tomislavmedak via Flickr 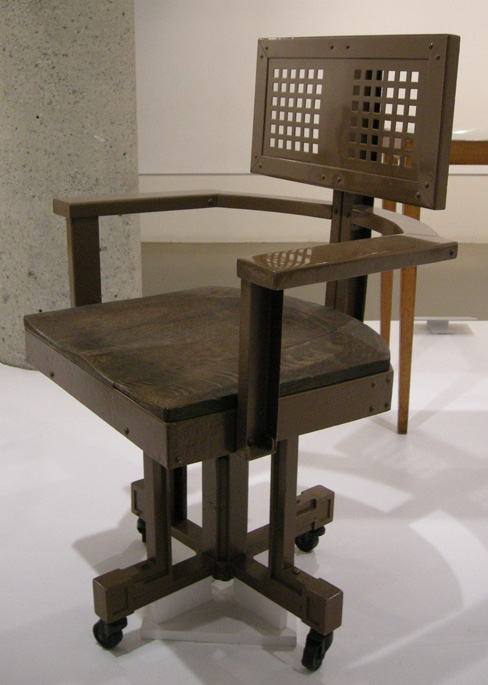 Office chair design at the turn of the century: This chair was part of the equipment of Frank Lloyd Wright’s “Larkin Building” in Buffalo, photo © Sailko 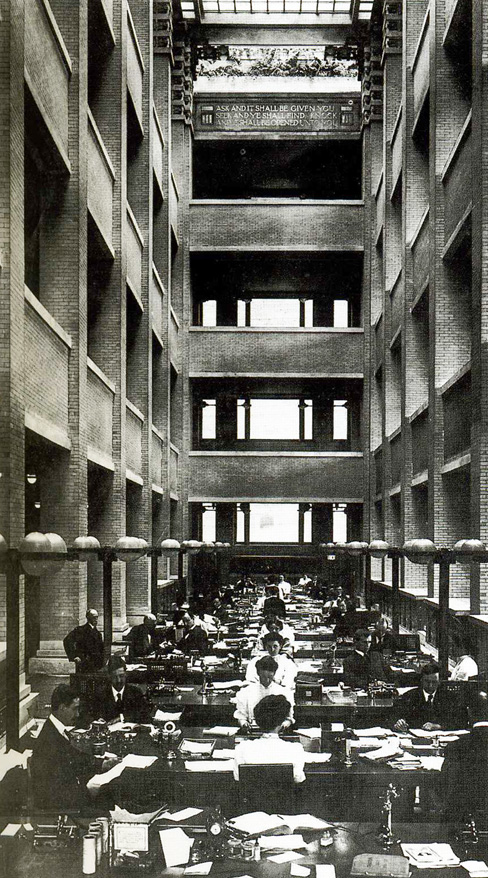 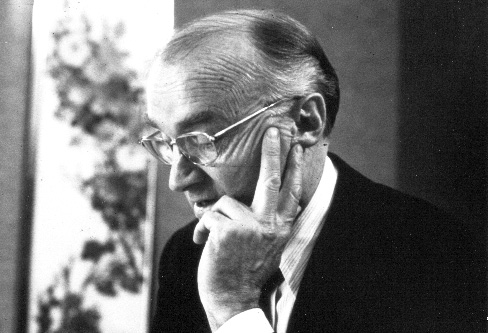 Robert Probst, one of the founders of the “Action Office 1” concept and inventor of the “cubicle” dividing walls, photo © Herman Miller 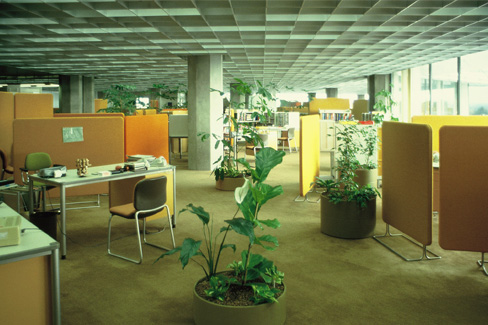 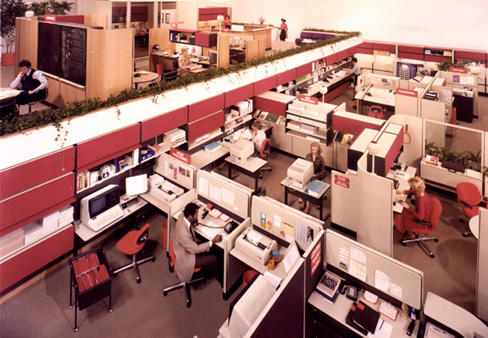 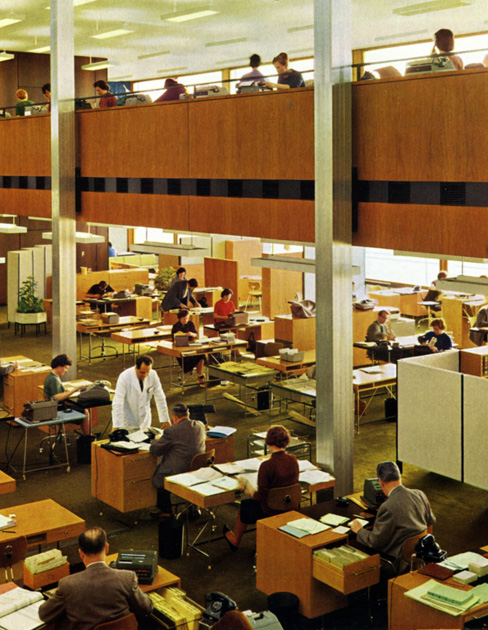 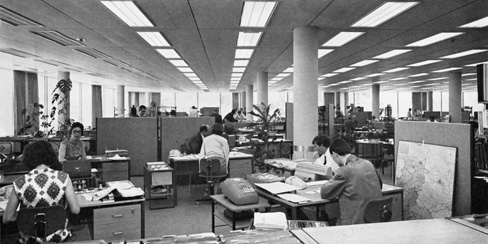 Interior of the Osram AG in 1965, photo © Quickborner Team 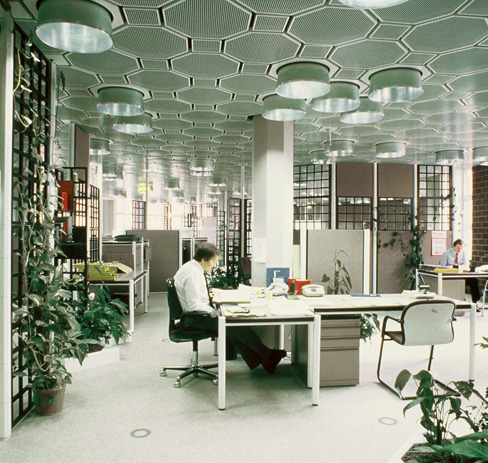 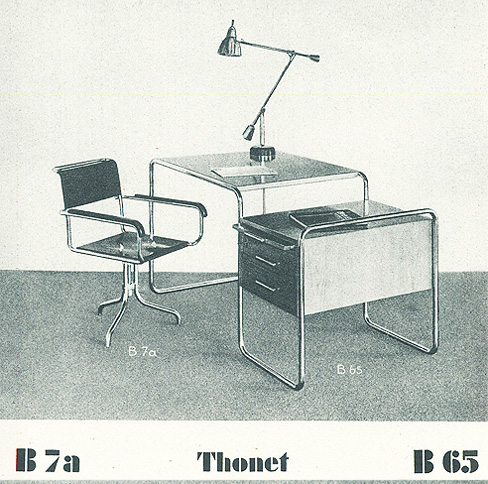 In 1930, Marcel Breuer designed the tubular-steel desk “B65” for Thonet, photo © Thonet 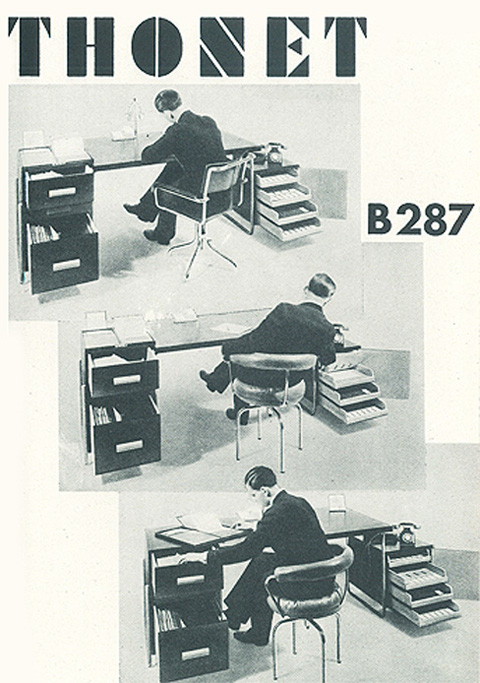 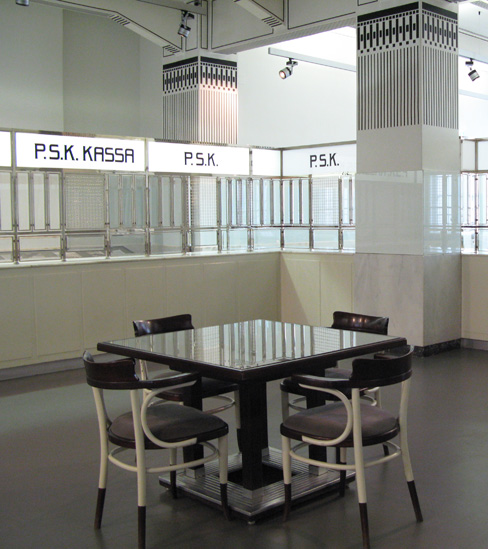 Otto Wagner did not only create the architectural concept of the Postsparkassenamt in Vienna (1903-06), he was also responsible for the interior design, photo © paula soler-moya via Flickr 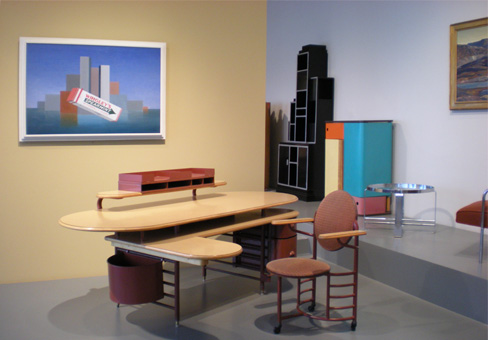 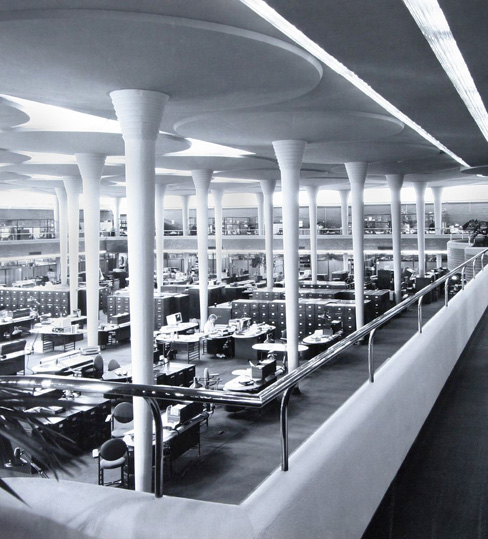 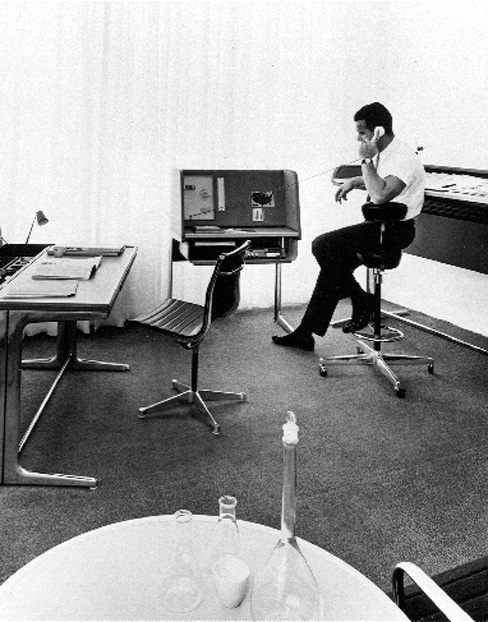 “Action Office 1”, a collaboration project by George Nelson and Robert Probst, is considered one of the most influential concepts in the history of office furniture and design, photo © Herman Miller 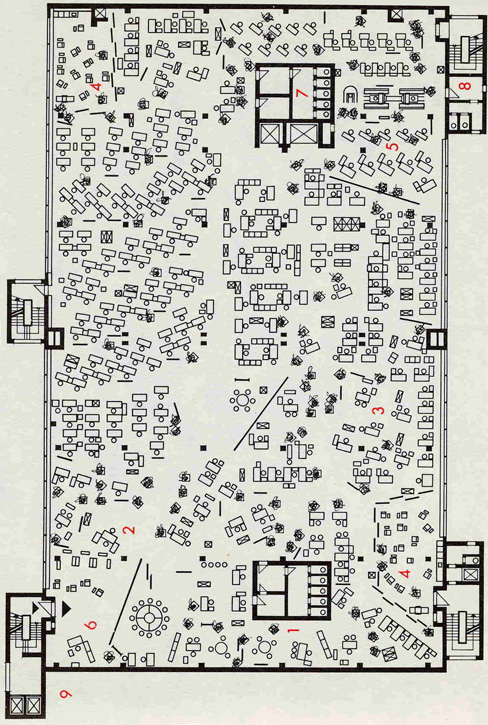 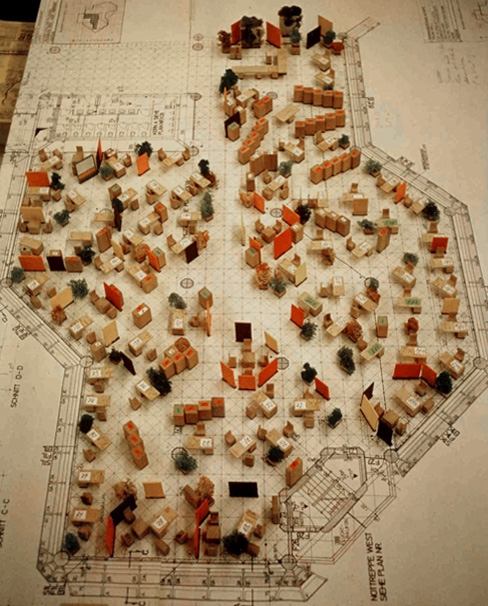 Planning model of the premises of the Stadtwerke Karlsruhe, 1975-77, photo © Quickborner Team 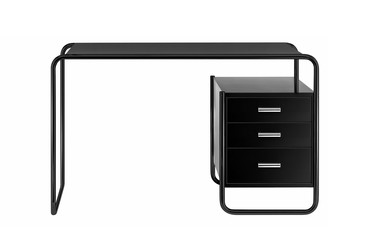 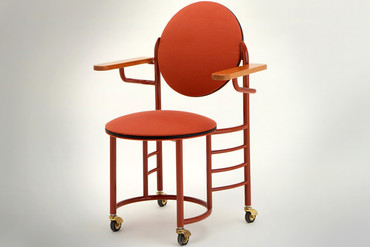 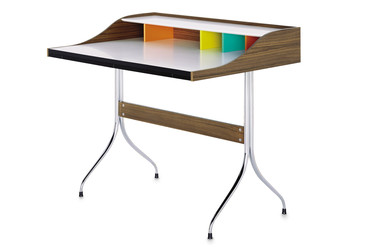 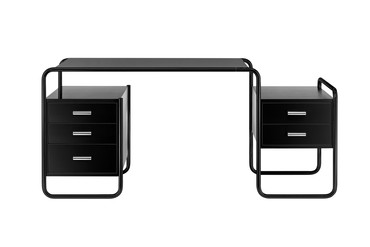 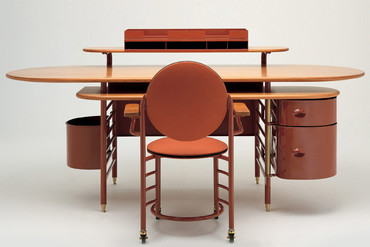