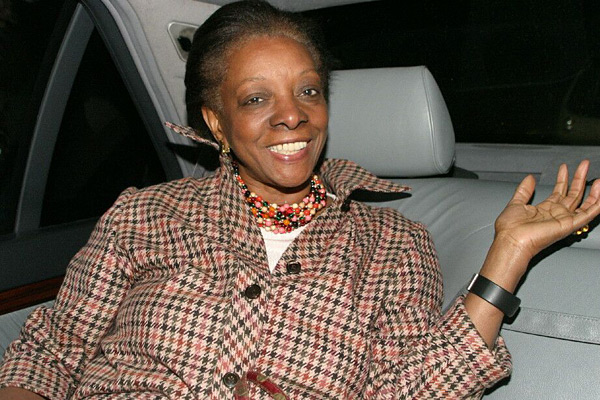 Some constellations appear to have been in existence forever and we simply cannot imagine how things could ever be different. Salone Satellite in Milan is inextricably linked with the name of Marva Griffin. 15 years ago, in the context of the Salone del Mobile, a platform was established that has remained one of the most important ports of call for up-and-coming designers and that is, for journalists and trend scouts from all over the world, considered the starting point for their research. Salone Satellite was, and indeed still is a breeding ground for large numbers of interesting design talents and stimulating product ideas; many a great name made his first contact with manufacturers here. Marva Griffin, this Venezuelan-born curator with the sure hand, has helped many designers to establish an interesting network from these initial contacts. It seems scarcely imaginable that Marva Griffin might retire from the event and the design scene and indeed: her gaze sweeps on, already envisaging new potential in fresh locations. An interview by Robert Volhard and Jörg Zimmermann.

Marva, your name is connected with the success of the Salone Satellite. What was behind the idea to set up a special fair for young designers in 1998?

Marva Griffin: You know, I have told the story 100 times.... In the late 1990s, for young designers at the beginning of their careers it was very difficult to build up contacts with manufacturers. Some of them had the possibility to rent a space or a gallery or just a little corner somewhere in the city of Milan and maybe they took part in the Fuorisalone. They had to spend a lot of money but without any guarantee to get in touch of establishing contact with manufacturers, journalists or interesting people. So sooner or later they realized that their only hope was to be within the Salone where the manufacturers would see their projects and prototypes. I knew some of them because I was involved with the magazines "Maison & Jardin" and "American House & Garden". Young designers were always asking me what to do and how to get in touch with industry. They knew about my relationship with Cosmit. So they asked me: "Marva, why can't we exhibit at the Fiera?" And I went to the management and told them there was a need for exhibition space for young designers. But at that time there was no possibility of presenting them at the fair. One day, Manlio Armellini, the former Cosmit CEO, called me and said: "Marva, we have a space. Fiera Milano has assigned us a pavilion that could be used for events. Now you have the space, see what you can do about bringing the young people to the fair." That was the beginning. I went to my studio for two days, I made some calls to people all over the world and that was the start of Salone Satelite.

Can you recall the special atmosphere of the first Salone Satellite that many participants still remember?

Griffin: Oh yes, I can. It was incredible because they had never heard of it. When I approached some young designers, they surprisingly did not know the Salone. At the beginning, I had problems with a few of them who wanted to sell their products like an exhibitor. I said: "You do not sell here. You have to present your prototypes, industry will walk in and have a look, the press will show up and publish your prototypes. So you will be known to a broader audience and to museums and so on." For example, Nathanel Gluska first presented his pieces at the Salone Satellite in 1998 and then in 1999. The next year, Sotheby's made him a one-man show in London.

Also Patrick Jouin came in at the last minute because I had called Chantal Hamaide, Director of "Intramuros" and told her: "I am doing this Salone Satellite thing, you are in touch with young designers in France and you know any young designer who might possibly participate." She was emphatic about the idea and visiting Starck's studio l told them what would be happening in Milan and two hours later I got a call from Patrick. It was late when he called: "Hello Madame Griffin, we would like to come to Milan. Would you be so nice to..." So I gave him a little space. Later Patrick sent me a letter, which is published in the catalogue about Philippe Starck, nice comments on the first Salone Satellite. Afterwards, he told me: "My colleague Jean-Marie Massaud and I are working on a project which we want to show at the Salone Satellite in 1999", and their story is still going on ...

When you look back; what was the most enthusiastic or emotional moment while you were running the Salone Satellite?

Griffin: I love it when I get emails or phone calls from the designers: "Oh Marva, Mrs. Griffin, Cappellini or Fontana Arte is now producing my piece, and so on." For me, that is the main objective of Salone Satellite. We help the young designers to get themselves known and to find manufacturers. In the end, I am happy when they are happy.

What do you think about the role of design in today's business? Has design become just a feature or could design significantly benefit both the customers and the manufactures?

Griffin: Designers are very important. For me personally, the escalation starts with music conductors –who are THE stars for me, maybe because I love music so much. They are followed by architects, designers and chefs. In my office I have a phrase that has been pinned on the wall. I think I got from Australia. It says: "Design is the oldest industry in the world." Which is absolutely true. Whatever we have in our hands is designed, even the bed where I was born. Maybe many pieces are not contemporary design but someone thought about them and made a sketch on a piece of paper to build them, to construct them. So for me, everything is design.

Let's have a look into the future. In your opinion, what are the challenges for young designers today?

Griffin: I'm the last person to ask that. How should I know what will come in the future? Last year because of the 50th anniversary of the Salone del Mobile I asked three universities – Columbia International University in the US, Bezalel Arts and Design Academy in Israel and Politecnico di Milano and seven young designers – to draw a picture on design, furniture design which will come up in the next 50 years. Every participant showed another approach and made something different. So I was a bit confused because their thinking on design was different. I live day by day. Steve Jobs made all those magnificent things like that one you hold in your hand. You have something to record my voice with, you can listen to songs; you can look at the photo of your baby, of your wife. We. Here we are now in Vicenza and if I want to call my family I can see the face of my sister. This is the design of today. What's going to happen in ten years? I do not know because in this race everything is going so fast. Maybe sometime we will slow down and we will all go back to our old phones. I don't know what is going to happen. Let's enjoy what's happening today.

Griffin: Look, I love the job and I have been doing it for so many years. I started 41 years ago with Piero Ambrogio Busnelli at C&B Italia (now B&B Italia). I was his assistant for translations and communications but I did everything. I traveled with Mr. Busnelli and Mr. Cesare Cassina visiting plants and factories all over the world, such as: Herman Miller in Michigan, others in Brazil and Scandinavia. I met Renzo Piano as a young and upcoming architect when he came to do our offices. So this was my "itinerary". Then I left the company and continued working on a freelance basis. I worked for the Conde Nast magazines doing journalism, interviewing, photographing interiors and houses. I have visited all the furniture fairs in the world. So my expertise is something that I have built up over years. This is the reason why I can do what I do. I did not start out yesterday and I am not saying that I will be leaving tomorrow. My approach is to find a person who could grow with the job. For a while I could stay on together with this person and train her or him on the job. And then after a while – piano, piano – this person will take over my job and I will leave. That is my idea of how to deal with this but you should ask the management how they would like to handle it.

What are your personal plans? Are you leaving the stage of the international design scene? Or are you looking for new personal challenges?

Griffin: I have started a few things already. I'm Venezuelan, and my roots are in Latin America. Latin America is so incredible young. It's not European. More than 60 percent of the population are young people. There is a creativity sleeping in all countries of Latin America. They can do fabulous things. We have for example the Campana Brothers. I am working on projects with the Campanas. I took them to Venezuela to do a workshop with 21 young designers. I was in Santiago de Chile for the Biennale to see young designers who will be exhibiting at Salone Satellite this year. In August, I am going to Colombia. And for the future, I don't want to copy Salone Satellite, but hope to work on projects in Latin America. I'm not going to disappear but I will spend some more time in my beach house in Venezuela. That is for sure.

Marco Sabetta, (Cosmit's General Manager Editor's note), I asked Marva Griffin who will be organizing Salone Satellite once she retires and she said: Don't ask me, ask Marco. Could you give us a hint?

Marco Sabetta: The fact is that Marva will be staying with us for some time. We will decide together how the Salone Satellite will continue. There is no one like Marva. Nobody will do it the same way that she does. It is important for us and for the Salone Satellite to find someone together with her. Because we trust that she has the sensitivity to find the right person to succeed her.