Never before has a biennial offered so much in the way of history, retrospectives and critical assessments. And because what is involved is nothing less than international perspectives on Modernism and the related ambivalences, the issue of self-determination or outer-directedness invariably crops up. Modernism as a catalyst and/or suppressor of cultural identities? In the Giardini and in the Arsenale there are various different answers to this.

In Africa the first built manifestations of Modernism arose through colonialism and its latter-day consequences. To this day, the debate on the “Others’ Modernism” (occupiers and missionaries, oppressors and do-gooders) and the question as to an “indigenous”, modern architectural and cultural self-image informs architectural practices in Africa. That can be seen, for example, by the country contribution by Mozambique. This year for the first time the country is taking part in the Venice architecture biennale with a show entitled “Architecture between Two Worlds” that traces European influences and local traditions. While all around the world houses were built from concrete, in the traditional huts in which people lived all that changed was they became simpler and more angular. This at least is suggested by a timeline complete with images in the middle of the exhibition. In its exhibition, South Africa also focuses on the roots of contemporary architectural practice: Two opposing Modernist movements. 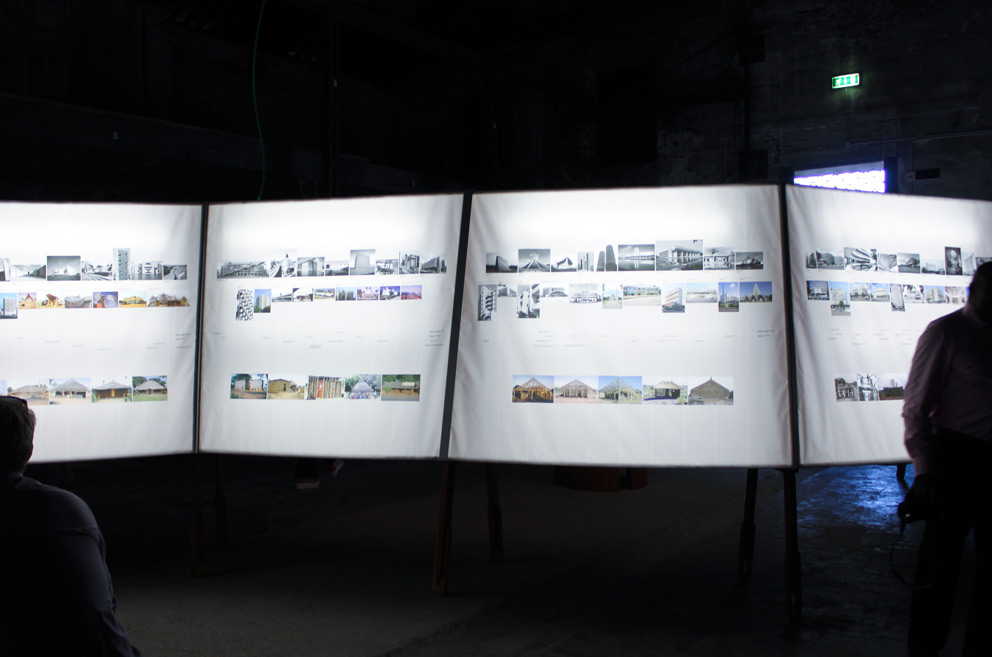 Country contribution by Mozambique: While all around the world houses were built from concrete, in the traditional huts in which people lived all that changed was they became simpler and more angular. Photo © Adeline Seidel, Stylepark

In 2014 South Africa celebrated the end of apartheid for the 20th time. And a large part of the buildings sprung up over the last two decades. Projects such as the new constitutional court on “Constitution Hill” in Johannesburg or the Maropeng visitor center at the “Cradle of Humankind” World Heritage site manifest the new inclusive way of seeing things in State of South Africa. Design and architecture are widely regarded as the driving force behind social change – Cape Town has currently chosen “Live Design. Transform Life” as its slogan for its function as World Design Capital 2014.

The South African contribution is interesting above all because with its interpretation of South African history it points to the two different sides to Modernism, and the complexity of the movement. The exhibition is entitled “Modernity and its Doubles” refers to the two large, nationalistically motivated formations that responded to the British occupation at the beginning of the 20th century: The Boer Republics and the African National Congress (ANC). Apartheid South Africa is also identified in the exhibition as a Modernist project as reflected in architectural products such as the Union Buildings designed by Herbert Baker (1913), the Voortrekker Monument (1949) or the buildings symbolizing the economic boom of the 1960s. The South African exhibition in the Arsenale showcases developments before and after 1994 and explores the foundations of an independent, new “truly African” architecture in South Africa that can only arise on the basis of an awareness of the ambivalent Modernist heritage. 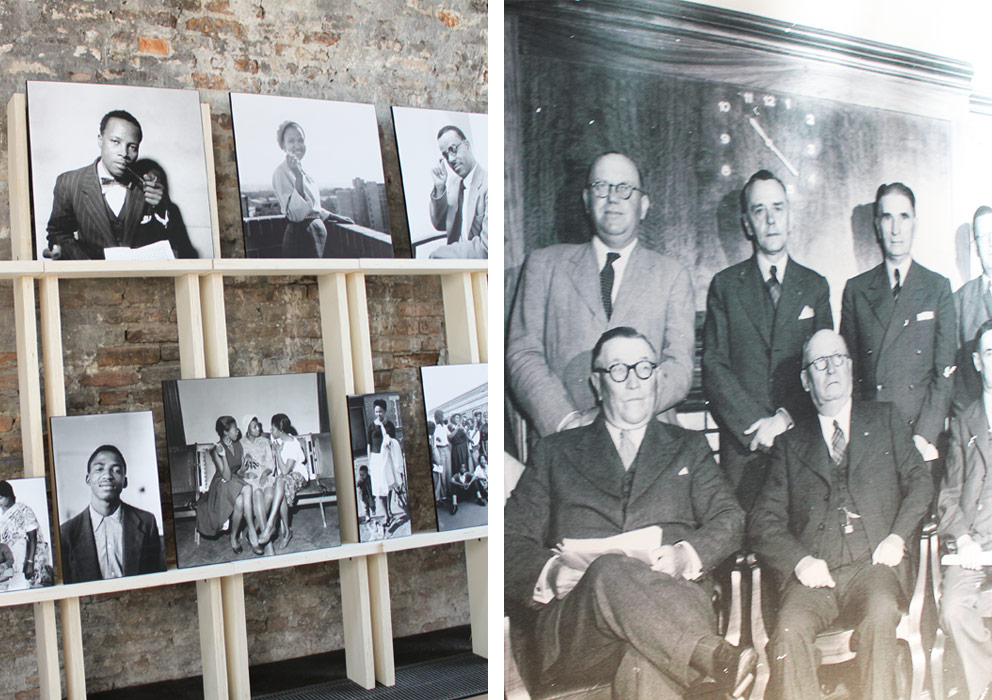 Even apartheid South Africa, the supremacy of the white race is identified in the exhibition as a project of modernity. Not only the architecture of the period are shown, but also the parallel societies of the state. Photos © Adeline Seidel, Stylepark

Ambivalences are initially not in evidence in the contribution by the Nordic countries. “Forms of Freedom” is the name the curators chose for this year’s contribution to the biennial. No question mark, and capital letters. “Forms of Freedom” focuses on the interaction of Nordic development aid and architecture as an export product in the 1960s and 1970s. At the entrance to the pavilion, this year alongside Norway, Denmark and Sweden, who use the exhibition hall alternately, we also find listed in golden letters Kenya, Zambia and Tanzania.

Can Norwegian architecture really shore up East African independence in terms of buildings? The exhibition organized by the Norwegian National Museum of Art, Architecture and Design paints a primarily positive picture. It would seem as if they all wanted to pat themselves on the back: First because they have now for the first time processed a hitherto almost unresearched chapter of Scandinavian architectural history. Second, because Nordic architectural Modernism in fact can be ascribed a key function in embodying a new, democratic identity for the young East African nations. 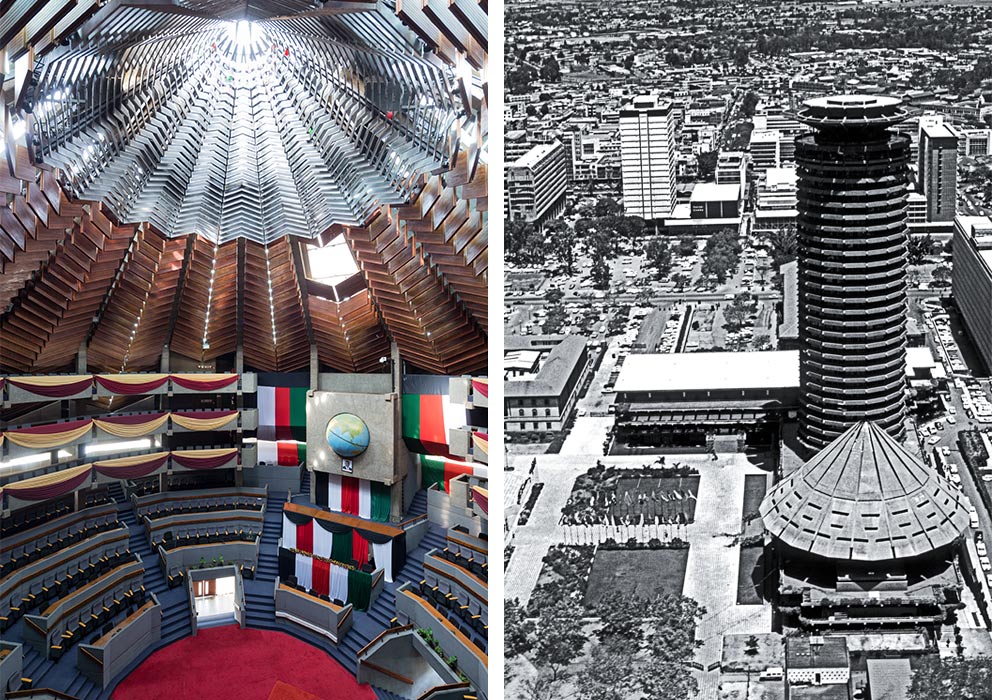 And for this reason above all success stories are foregrounded: The “Kenyatta International Conference Centre” (1966-73) masterminded by architect Karl Henrik Nøstvik is celebrated as a Kenyan “icon of independence” and landmark. The “Nordic Tanganyika Centre” in Tanzania (1963-1968), which is now called the “Kibaha Education Center”, was designed by architects Christoffersen and Hvalbye and is presented here as an acclaimed pilot project that President Julius Nyere sought to replicate throughout the country. There is no denying the positive impact on the region’s economic and infrastructural development – but how the architecture actually got replicated is not answered in the exhibition. And only in passing is there mention of the fact that the Zambian school building drive was not accomplished successfully – in the 1970s Norwegian company Norconsult (to this day the country’s largest engineering company) was commissioned to produce 65 prefabricated schools. 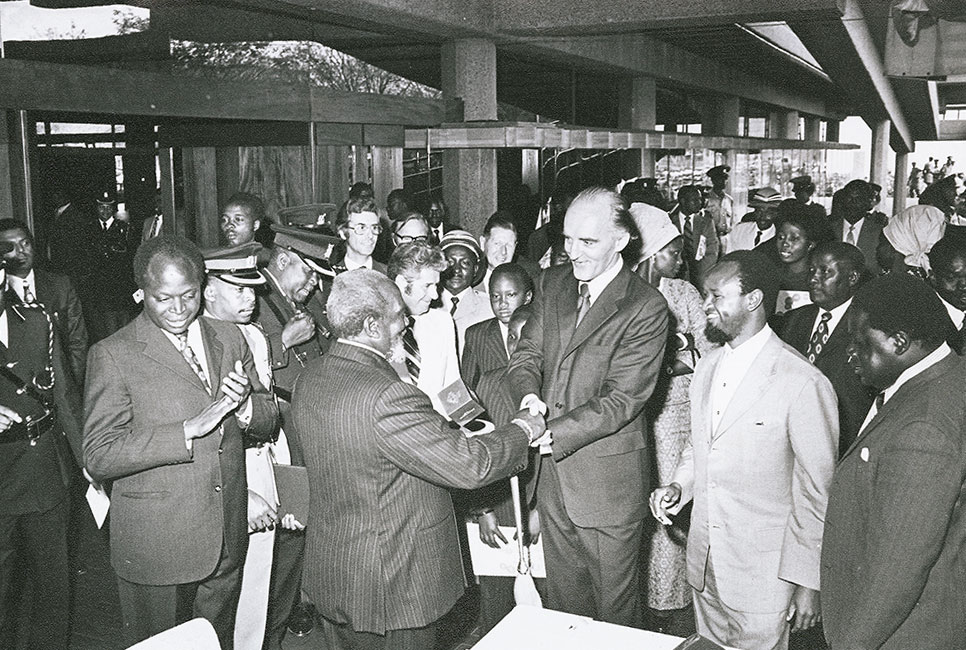 Enlightenment in the true sense of the word is only to be found on the very margins of the exhibition. What is presented on the panels in the center of the show as “desert industrialization” in Kenya was one of the largest development aid scandals of the 1970s. “Nordic Aid”, the Scandinavian technical development aid arm, installed an ultramodern fish factory for the nomades – the goat herdsmen were relocated to Lake Turkana to this end. However, no one had in advance calculated the costs to operate the building, above all the energy required to refrigerate the fish. The factory was not economically viable and was closed after only six weeks. The project led to the withdrawal and reorganization of “Nordic Aid”. Here, modern architecture symbolizes the failure of Nordic development aid, the creation of new dependences and definitely does not constitute a new “form of freedom”. Anyone who misses the video documentation “Good Intentions” at the side of the show and only concentrates on the central exhibition in the middle will learn nothing about that background. Why the curators chose to present the architecture separately from the context is anyone’s guess.

It would have been nice to learn more in the exhibition about how the buildings in the East African countries are viewed today. All we are told is that the buildings are still used – photos by Ivan Baan on the sides of the pavilion at least seem to prove this is the case with some of the projects. But are they really now considered representative buildings of the new national identity or only as welcome (as prepaid) but nevertheless strange outgrowths of an idea from the Northern hemisphere that has little to do with local realities? On leaving the show, and for all the Scandinavian feel-good exhibition design, a bit of an unpleasant taste lingers on in your mouth, at any rate. 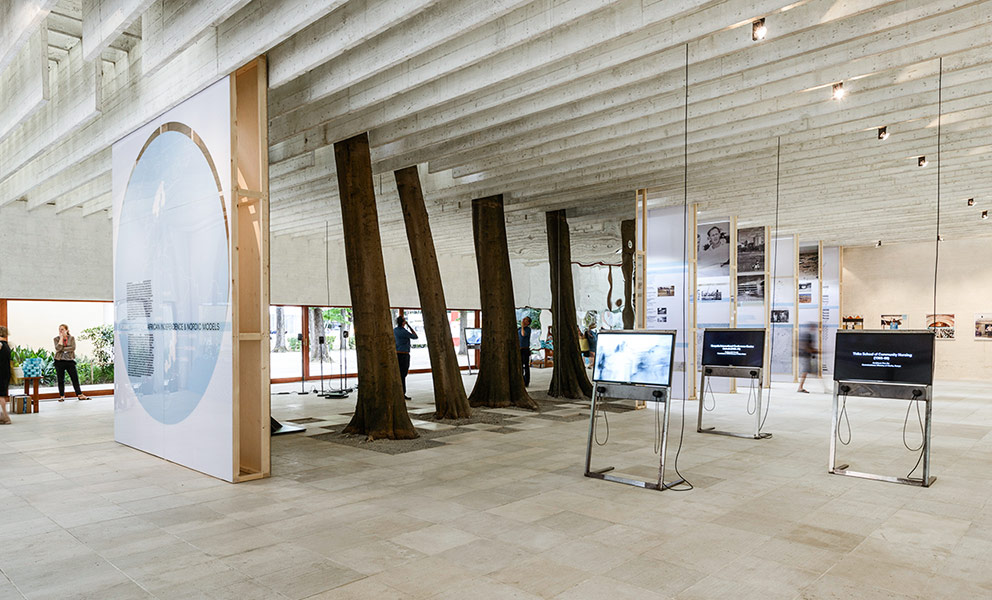 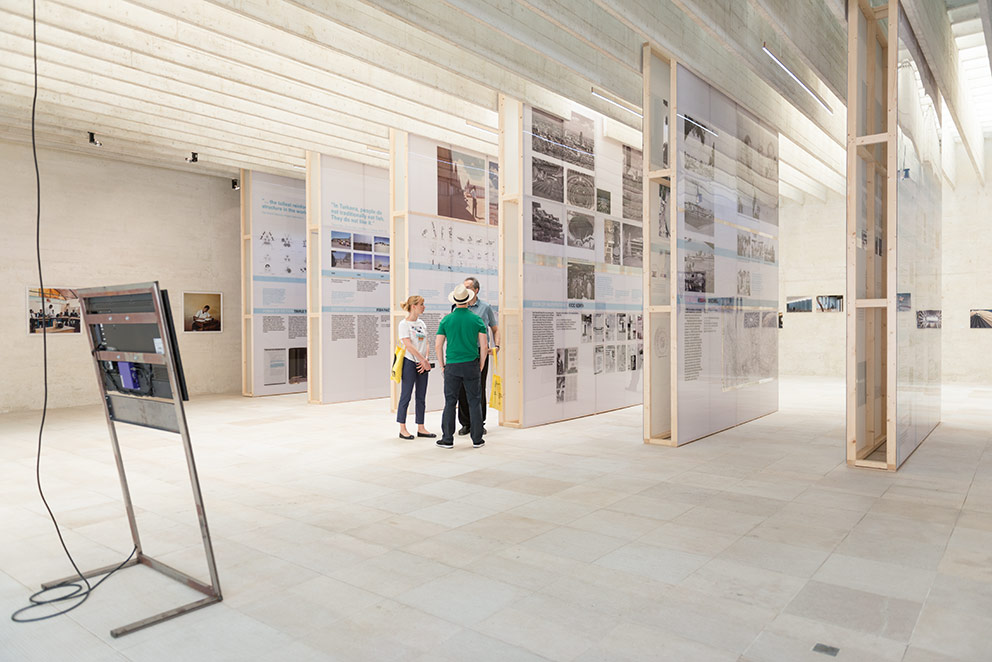 Whoever overlooks the video documentary "Good Intentions" on the edge of the exhibition and focuses on the central part of the exhibition in the middle, does not undergo any backgrounds. Photo © Andrea Avezzu, courtesy of la Biennale di Venezia 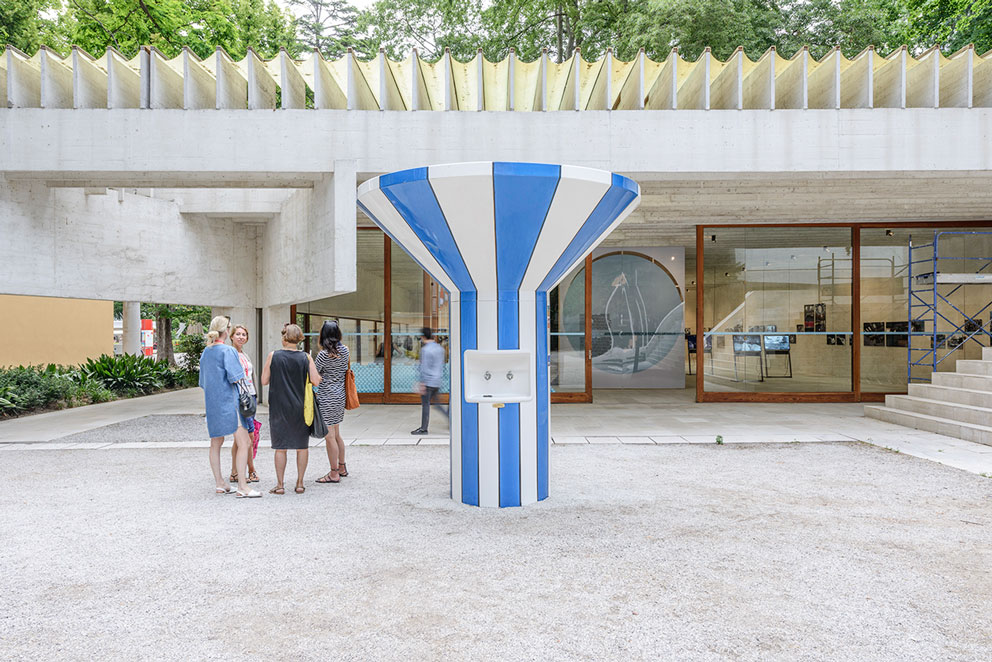 A drinking water well from Africa is standing in front of the pavilion. Photo © Andrea Avezzu, courtesy of la Biennale di Venezia
Advertisement