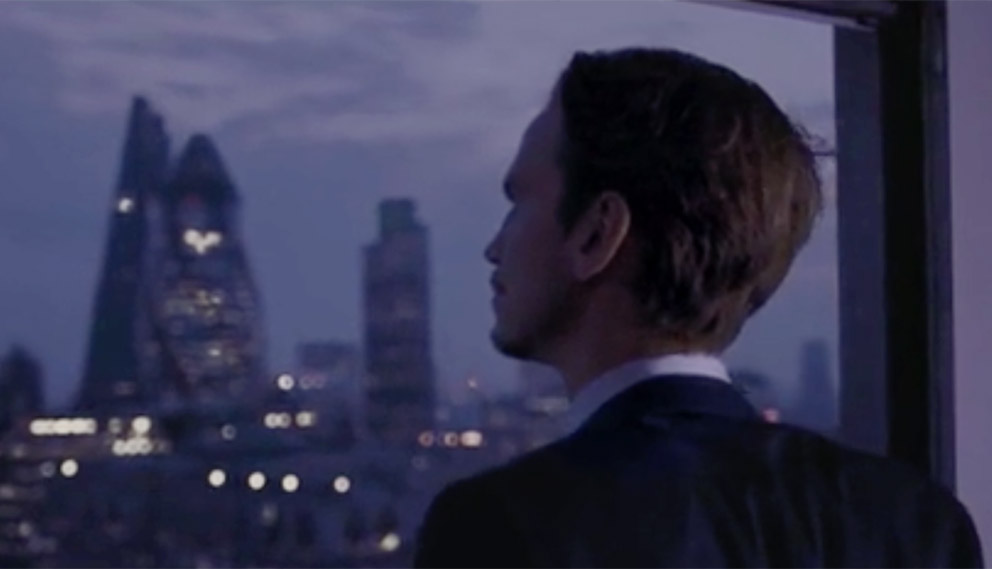 As far as the people at Redrow London are concerned, the man has “achieved the impossible” and made it right to the top – enjoying a penthouse apartment with a magnificent view of London, if nothing else. Film still: Redrow London commercial

Real-estate vendors have very special talents. Take the “Peach Property Group”, for example, which presents its current project like a movie distributor does its latest blockbuster. This one is called “Yoo Berlin – inspired by Starck”, and in it the ubiquitous master designer himself plays the seller. Addressing his potential clients in his most charming French accent: “Guten Tag, my name is Philippe Starck, and I must tell you: Isch liebe disch!” Disarmingly, he confesses that this is the only sentence he can say in German. His wife, he goes on to explain, was born in Germany and in the 16th century he, too, was a German. Now he is a Frenchman – “I am sorry, nobody is perfect.”

Not happy here? – You’ve only got yourself to blame

So who is behind the moniker “Yoo”? Starck certainly knows the bait with which you catch the biggest fish: “A piece of art, full of big and small details ...” There is nothing ordinary here, it is all creation. And turning to the apartments in the ten-storey complex (“a good size”) that he wants to sell, he advises his potential clients that these are available in four different interior design versions: “Classic”, “Culture”, “Minimal” and “Nature”. After all, or so the Website reveals, what we see is the result of a lovely liaison between the “prowess of the world’s most famous designer” and the “far-sightedness of international real-estate developer John Hitchcox.” And what these kinds of videos usually fail to disclose is plainly presented here: Prices start from 5,000 euros and go up to 8,700 euros per square meter. Quite a bargain considering that what you get is paradise in the midst of downtown Berlin: “This will be a sort of island, of paradise. If you are not happy in this place, it’s because you don’t want to be happy.” Well, that’s good to know.

Philippe Starck French-oozes “Isch liebe Disch” to attract potential clients happy to pay between 5,000 and 8,700 euros per square meter – in Berlin, that is, not in London.
Video © Peach Property Group

Living in the comfort zone

There is no harm in looking reality in the eye every now and then. In the case of so-called investor and real-estate projects checking out the architectural quality of new buildings or plots, or those that have been given a new lease of life, all of them financed by real-estate companies and developers, by funds and venture capitalists, is simply not enough. Because nowadays such major projects must be advertised before the start of building or conversion. After all, they need to be financed. To this end, specially produced commercial films and marketing brochures illustrate life in the upper echelons of the comfort zone. And we are not talking terraced housing projects in the suburbs here. We know what clients deserve. And sell them their dreams. The promises made by those delicious, predominantly computer-rendered images to the sounds of soft music and sonorous voices is a luxurious all-in carefree package, the product of the capitalist economy. There is no doubting that the upward trend is here to stay and that the return in investment will be bountiful. What is praised here is a metropolitan lifestyle that is forever clean, elegant, exclusive and unique. Welcome to the brave new world of real estate.

Those women and men destined to live, or rather reside, in these abodes are always in good shape, they are attractive and meet the popular ideal of beauty. There is a preference for blonde women. Men are successful and well-built. And the view from the apartments is nothing less than spectacular, interior fittings are exquisite, representative, but lacking in personal touch. Security, sports and leisure, entertainment and relaxation are equally catered for. While there is no shortage of readily identifiable status symbols (think females being driven to the airport in a Bentley). The soundtrack serves to round out the classy never boring lifestyle presented here.

Batman’s already been – the past Hollywood glamor of London’s “Battersea Power Station” is just the perfect sales pitch for the development zone next door.
Video © Battersea Project Land Company Limited

It’s a great asset if the place for the divine living experience for which investors are sought has already gained a reputation as a “location” of spectacular sports or concert events or has indeed served as a film set. And even if “Gotham City”, the hometown of Bruce Wayne alias Batman, is not exactly the place for the superrich to fulfil their coveted dreams of the future, albeit without murders and assassinations, nothing can beat the “iconic status” of the venerable structure that is “Battersea Power Station”. After all, the dilapidated remains of the erstwhile electricity provider on the south banks of the Thames, in operation from 1933 until 1983, has now been earmarked to become a cosmopolitan quarter packed with apartments, offices, shops, event and entertainment facilities, and a riverside park. Injecting “London with fresh energy” and one that is “green” into the bargain, the giant project is destined to become the world’s biggest carbon-neutral building: “A 21st Century Place like no other.”

Must-haves: front row and on the river: The financial capital that is Frankfurt/Main is a real international magnet and the architecture of “The Riverside Financial District” is perfectly in tune with global investor tastes. Video © Deutsche Immobilien Chancen AG & Co. KGaA

In the front row

And in Frankfurt/Main, too, which likes to flirt with the moniker of “Mainhatten” to boost itself international appeal, all eyes look to Manhattan and London for inspiration. Accordingly the offer is garnished with tasty images of the two trendsetting megacities. The reason: “People have always wanted to be close to the water, but unfortunately there is not enough room for everyone in the front row, where it’s the most beautiful.” This doesn’t exactly sound like someone promoting subsidized project housing. And, almost as if the River Main ran dry some time ago, now “Frankfurt too has rediscovered its river”. In what is allegedly Frankfurt’s most beautiful neighborhood the banking district now extends all the way down to the Main, with new “Maintor” complex destined to become the city’s “Riverside Financial District” – a “business quarter of the highest international standard.” The idea is to create an urban quarter en miniature, a “mixed usage solution comprising offices, retail and hospitality”, that will make the dream of “living and working on the Main” a reality – with all the essential “hotspots” as regards “art and culture, lifestyle, hospitality and shopping” located “within perfect reach”. And because the project only attracted the crème-de-la-crème of the architectural world – Jürgen Engel, Professor Christoph Mäckler, Jo. Franzke and Sergio Canton – the “impressive result” has long since been decided and any kind of criticism would seem very much out of place: “An ensemble of spectacular architectural highlights.”

The real estate developers are convinced that these building projects have everything to bring joy to the heart of any a global jetsetter: countryside tranquility and pulsating city life – and only a stone’s throw apart. Video © Ballymore Group

Watching several of these video clips back to back we swiftly home in on the buzzwords that make up the foundation of the advertising campaign: The project is definitely unique. Almost always there is mention of maximum comfort and efficiency, of a perfect blend of business and lifestyle, complete with premium interior design – prestigious and of international caliber. Considering that all items in this collection of smooth images and gleaming surface finishes are “state-of-the-art” it’s not surprising that the architecture itself assumes the role of nanny for well-heeled adults – promising exclusive “work-life oases” with premium all-inclusive services. And as an attractive aside we learn that New York’s “High Line Park” is soon to be complemented on the other side of the Pond by London’s “Embassy Gardens”.

Berlin’s “Kronprinzgärten” is destined to quench our thirst for the good old times, nonetheless you will find plenty of horse-powered limos alongside those horse-drawn ones.
Video © BAUWERT Werderscher Markt GmbH

In the case of the “Kronprinzengärten” it is a dark-haired beauty who strolls across Gendarmenmarkt to the soft sounds of piano music and quickly pops into Louis Vuitton before she enjoys haute cuisine (with her partner or could it be the real-estate agent?) to violins playing in the background and under the silver cloche discovers a rendered fantasy cooked up in the investors’ kitchen. Nostalgic, dignified, and seasoned with the spices of Wilhelminian-style tranquility complete with a horse-drawn carriage and a horse-powered carriage, a white grand piano, rooftop terrace and a view of the Deutscher Dom cathedral, this is an atmospheric narrative presented entirely without words – until the very end where we read: “Now it’s on you to continue the story ...”

“One Madison” is a slim high-rise situated in a “dynamic neighborhood” – whatever that’s supposed to mean. Video © Related Companies

Those potential buyers looking for an indoor pool, dogs on the treadmill and gourmet kitchens will find their dream home in New York’s “MiMA”, where they get to enjoy “The luxury of Related in the middle of Manhattan”. Sounds somewhat less exclusive, even if you know Related is a luxury rental company. The alternative is “One Madison”, is a very narrow, very tall residential high-rise with a “dynamic neighborhood”, whose materiality (and how could this be otherwise) is described as “very special” and “unique”. Spectacular vistas from every floor included. John Cetra, the building’s “principal architect” sums up the sales strategy par excellence as he says: “People who make the decision to live here buy a piece of New York.” Things are only seemingly different in London but upon closer look the same strategic spirit (“make the impossible possible – to rise and rise”) is at work to sell the luxury apartments at Redrow London. For here too, what ultimately counts is rising to the top, where clients get to look over the city as if they ruled it, enabling them to pat themselves on the back and praise their own success: “I did this.”

What we witness here is diverse key stimuli destined to trigger a glamorous fantasy of urban life. Clever use is made of names of luxury brands and galleries mentioned in passing, flashing up like the glittering bait used to get fish hooked. There is nothing wrong with – or sly about – these clips Falsch – oder listig – an diesen harmlos auftrumpfenden Werbefilmen ist nicht, was sie zeigen und sagen, sondern was sie verschweigen.

Redrow London caused a shitstorm on the Web with this video. Many took the reference to the movie “American Psycho” in some of the scenes as a metaphor for the not-so-very-social behavior of most real estate developers. Film © Redrow London at Pat Bateman Vimeo Channel
Advertisement