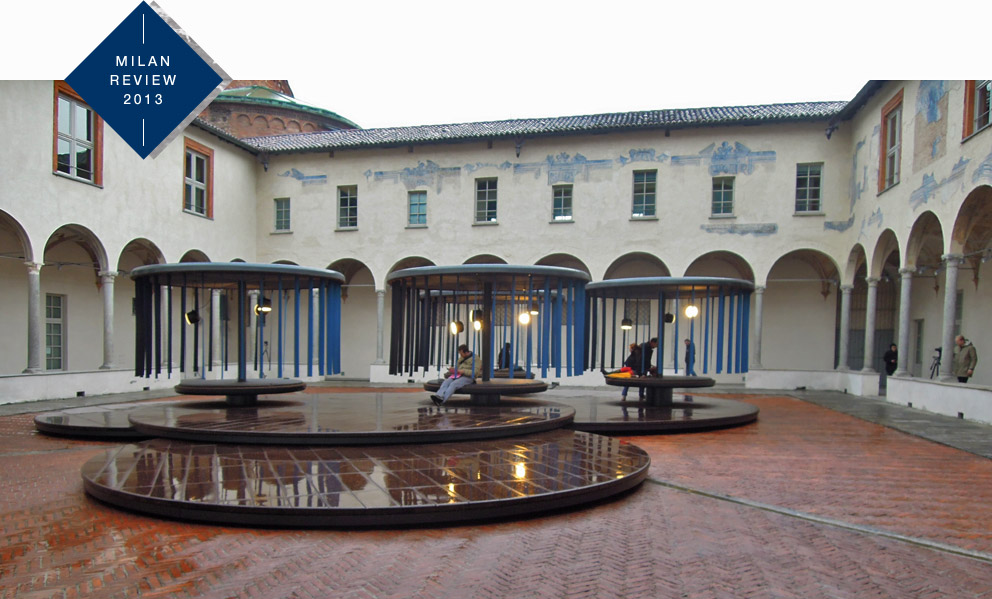 Keep quiet. Beyond the hustle and bustle of the fair BMW joined forces with the Bouroullec brothers and presented their vision of mobility for the future. Photo © Thomas Wagner, Stylepark

As smooth as silk and quiet as a mouse – the four carousel-like structures that now occupy the inner courtyard of the Theological University on Via Cavalieri del Santo Sepolcro rotate slowly on their axes. The visitors gathered here look like extras in a modern-day silent movie. Some maintain a deferential distance; others perch on the edges of these large, futuristic installations that turn and turn like spinning tops that will never topple. The blue strips of fabric attached to the roofs sway gently as they spin. And everyone’s asking themselves, what the hell is that supposed to mean? “Quiet Motion” is the title BMW has chosen for this collaborative project together with French design duo Erwan and Ronan Bouroullec, with which the automotive marque invited designers, the press and visitors to a tête-à-tête at this year’s Salone del Mobile, to reflect upon mobility concepts for the future.

Man and his motor, and the landscape

“This project really means a lot to us,” stressed Head of Design at BMW Adrian van Hooydonk. “Inspiration, exchange, discussion. Working with other designers helps us to validate the things we do.” BMW has been present at the Salone del Mobile in the form of joint projects with designers for some years now, including collaborations with designers such as Patricia Urquiola. And this year it was the Bouroullecs’ turn. “We want to create a dialog on tranquility and movement,” says Ronan Bouroullec. His brother Erwan adds: “We’re not interested in the power of cars. Rather we’re fascinated by the extent to which people and motors can become part of a landscape.”

The brothers spent two years working on the installation for BMWi. Here are a few facts: The three platforms take up a space measuring 17m x 14m. In order to stay true to the sub-brand BMWi’s vision, based on which the company’s first electric engine is set to be launched this year, they made use of elements taken from eco-friendly car construction. As such, the carousels are driven by an electromotor; the carbon in the central columns is specifically made for use in lightweight construction using nothing but renewable energy; the seats are covered in leather tanned using plant-based tannins; and the cork in the platform comes from sustainable sources.

It was the idea of quiet, low-emission car travel, whereby you can let your gaze wander over the passing landscape, that formed the driving force behind the concept. “We have abstracted this modern-day nomadic existence in a new, poetic way, by visualizing movement in harmony with its environment and creating a form of observation that resembles what we see from a car window,” explains Erwan Bouroullec. And BMW’s objective to make this concept a success (and not least to make a contribution to fostering a more eco-friendly approach to automotive manufacture) is as pragmatic as this new mobility concept is poetic. For the electric car has by no means reached the point at which automobile manufacturers see it. Germany, for example, a country that has made a name for itself across the globe in the area of renewable energy sources by producing cutting-edge solar technology, is (as recently revealed by the Federal Government) in fact behind its objectives to make use of the options offered by electromobility.

Getting BMW and the Bouroullec brothers together was certainly no easy undertaking. There is no mistaking that the brothers aren’t the biggest car fanatics. It’s much easier to imagine them both traveling through the city by bike or on foot, or opting for the Metro in Paris. As such it is only logical that they wanted to use the BMWi project as a platform to express their ideas on alternative forms of transport. Adrian van Hooydonk seems thrilled with the collaboration with the Bouroullecs. He tells how both parties approached the project with the greatest of respect and esteem for each other: after all, they both count among the heavyweights in their respective fields. The two teams are said to have clicked immediately, and Hooydonk highlights their modest approach, describing them as real aces in the field of production.

The beauty of a sub-brand

“BMWi is our way of pressing the reset button,” explains the designer. The new mobility concept, which will be rolled out this year with a series-ready model in the form of the BMW i3, is BMW’s attempt to address new groups of buyers – without alienating the old ones. The new, younger audience is less interested in horsepower and rather in aspects such as sustainability and efficiency – something of which Hooydonk is convinced. He says they are moving away from “more and more” and that this is the beauty of a sub-brand, namely its ability to realize such objectives for BMW. He also stressed the importance of the collaboration with the Bouroullecs: “The Furniture Fair is a good platform to spark a discourse around design projects. At a car show I have to be able to explain a project in three minutes. What the Bouroullecs have made here certainly wouldn’t work there.” As a passionate Mini driver himself, he can hardly wait for the market to become ripe for the new BMW i3 so that he can whizz around Munich in one himself.

Of course, the installation is a little too abstract for some. For true car lovers, a concept car, such as the one designed by Ross Lovegrove for Renault and presented at the Triennale, is more of an indicator of the future of car design. On the other hand, some see it as nothing more than a PR gimmick (the installation did admittedly feature the Bouroullecs’ latest lighting design for Flos) or possibly as a form of insolence on the side of designers taking a step into the art world. However, the idea to turn quiet, low-emission transportation into the message behind an installation is a charming one and will certainly stick in people’s heads. A project by designers with and for designers that encourages people to spend time reflecting on the topic and not least sparks a dialog, could perhaps help to fire up the engine behind the declared political goal to create and promote eco-friendly mobility after all. 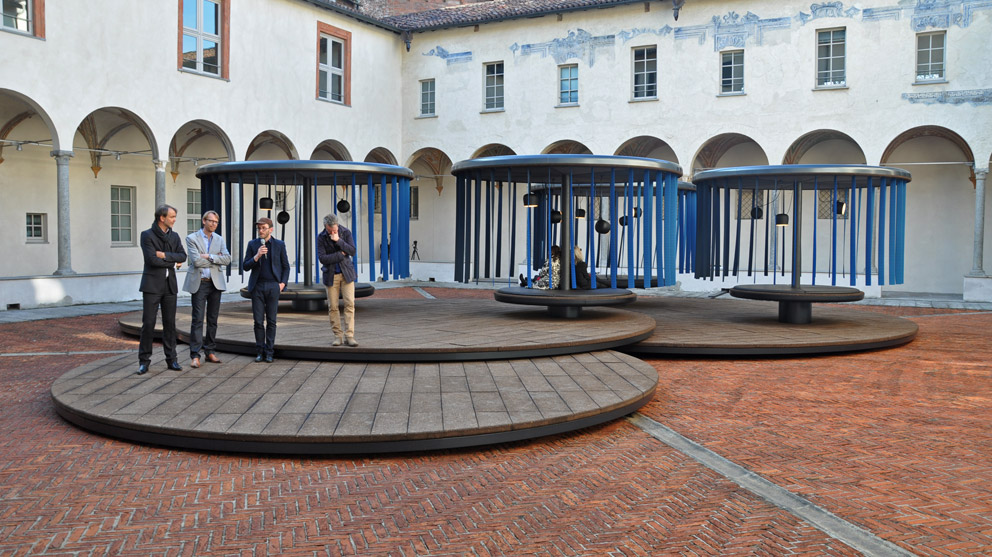 Soundless, driven by an electric motor: the four platforms invites you to stay and to reflect about it. Photo © Robert Volhard, Stylepark 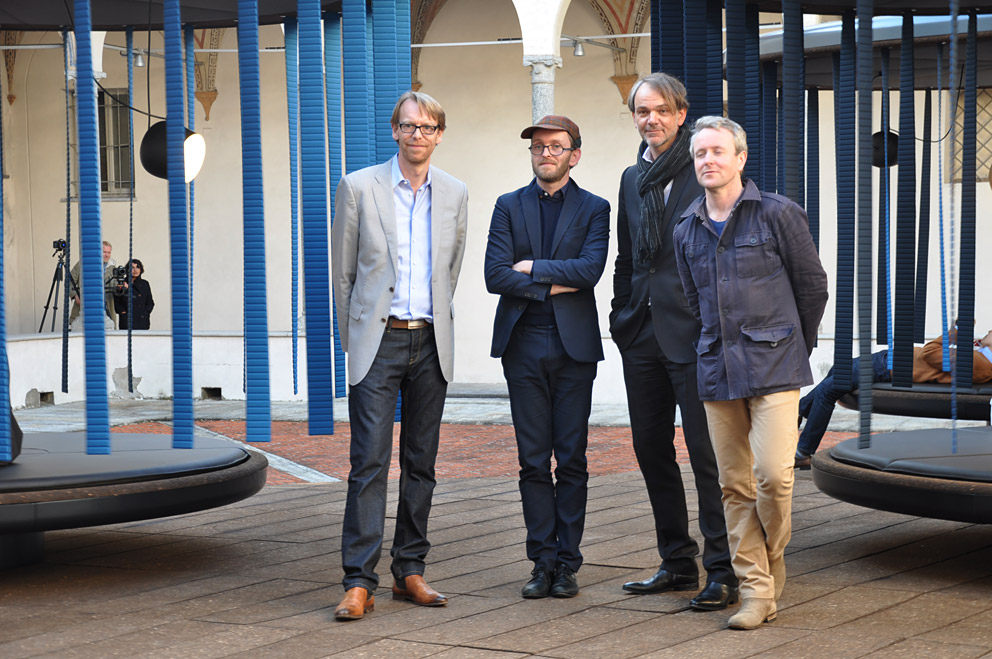 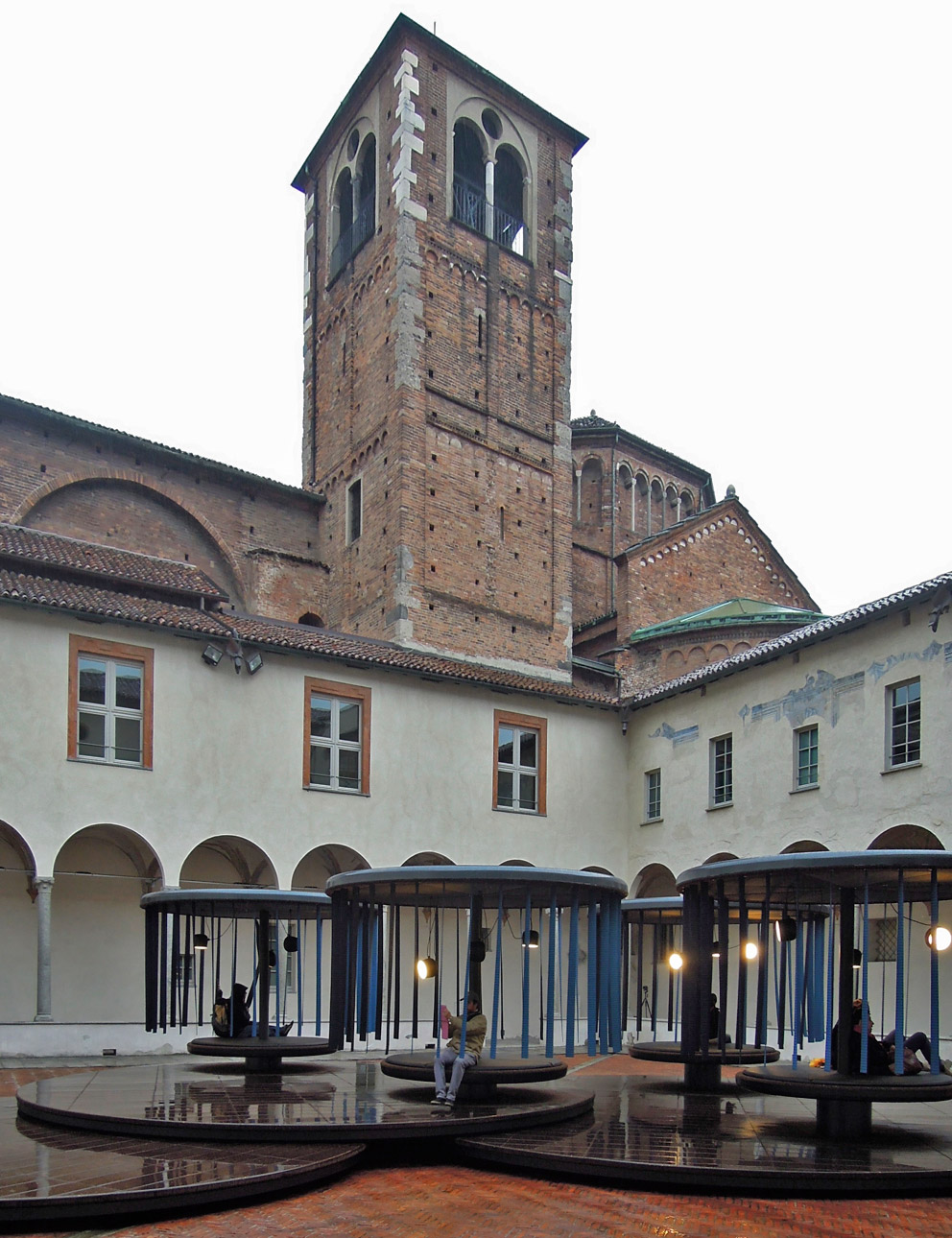 The Installation should animate people to discuss about e-mobility and the brand BMWi. Photo © BMW 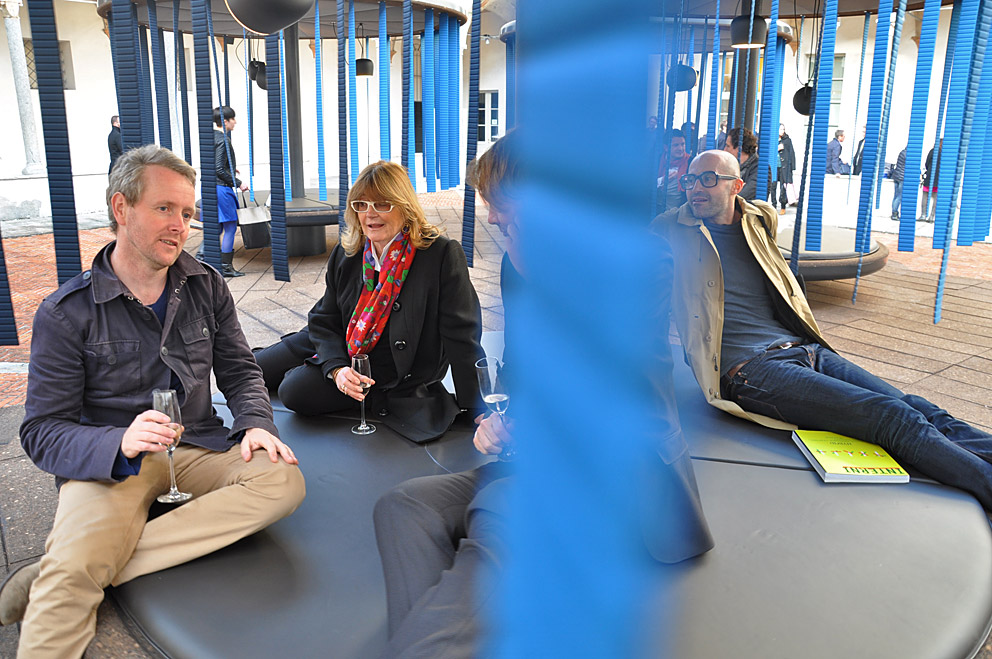 Two years of work for the Bouroullecs. The project was implemented from the MKT AG located in Olching. On the photo: Ronan Bouroullec. Photo © Robert Volhard, Stylepark 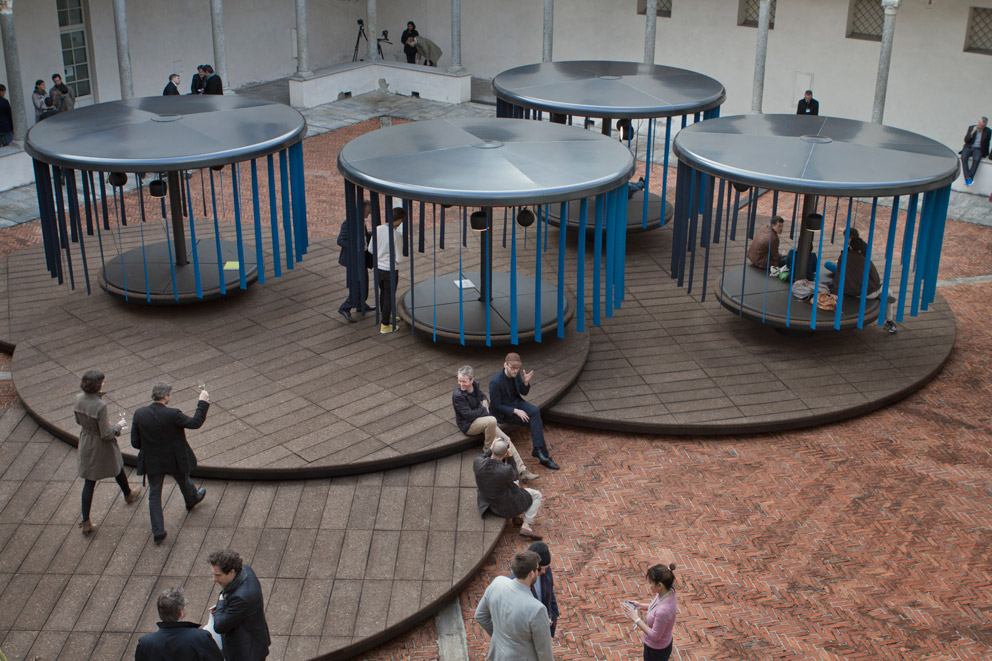 Man and mobile as a part of a landscape – that’s the vision by the Bouroullecs. Photo © BMW 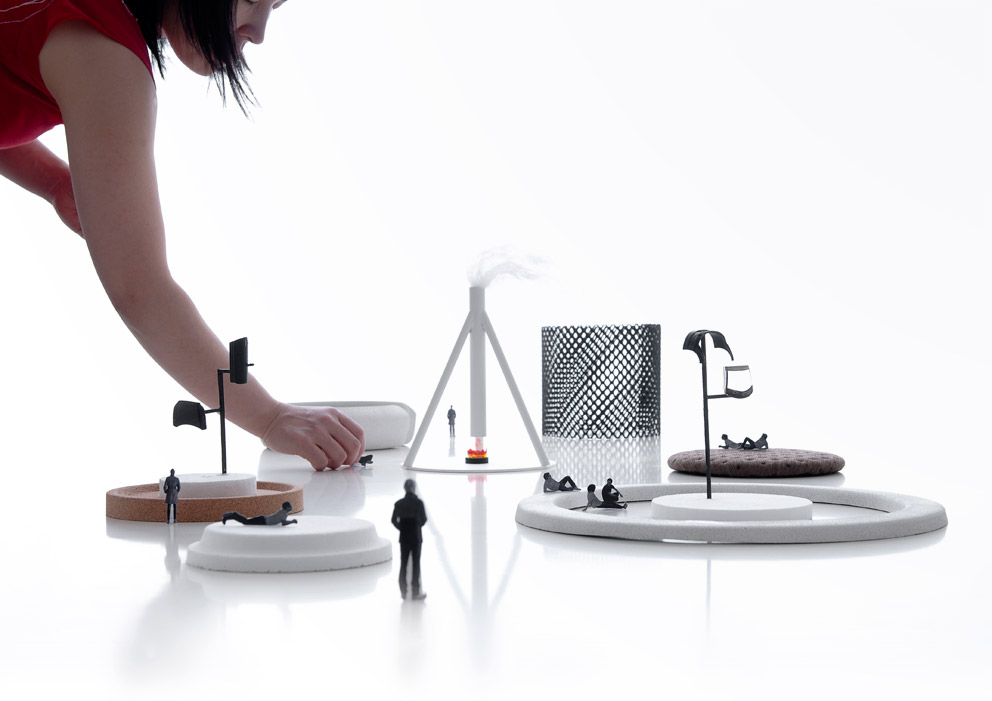