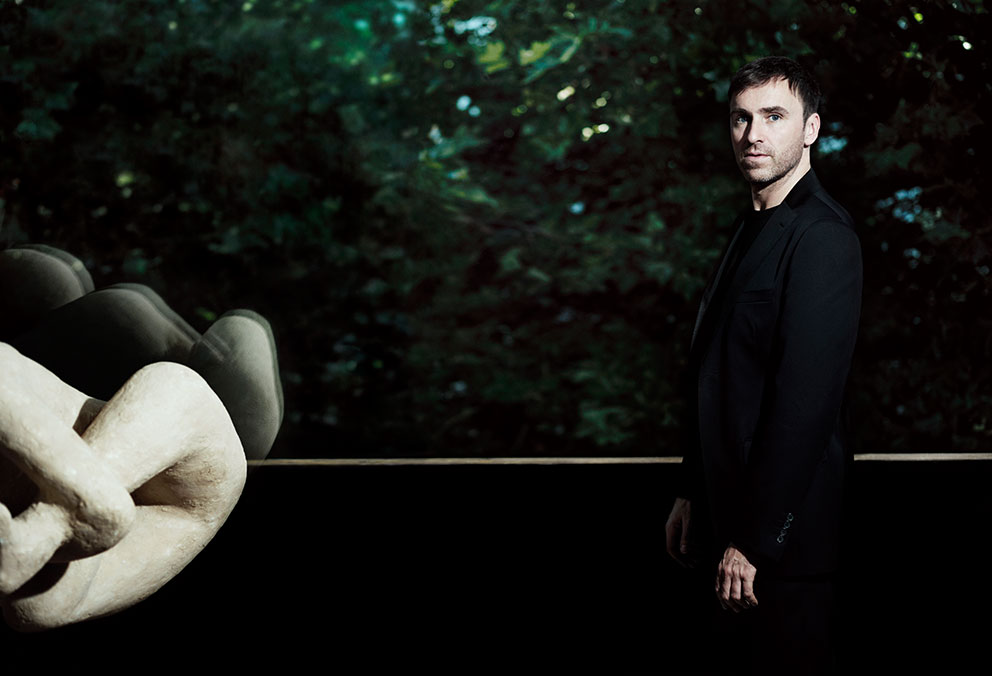 There are many points where fashion and furniture meet. First and foremost in the case of fabric. Even if the textiles industry subdivides itself into “textiles for clothing” and “textiles for upholstery”, and the latter is supposed per se to be more timeless and durable than the cloth from which are clothes are cut. Yet in general in recent years fabrics have become ever more refined.

In the field of furniture, this means that not only the color of the covers catches the eye, but the different material or haptic qualities. Irrespective of whether the textile is made from natural materials or whether it has a coarse, fine, velvety fluffy or felty feel. As regards fashion, for some seasons now this world has been truly intoxicated by fabric and color sensations. Extraordinary, luxurious yarn mixes, strongly contoured 3D or even high-tech textures are now defining if not truly rejuvenating the face of fashion.

One person who is a past master of the fashionable blending of colors and fabrics is Belgian designer Raf Simons. Only logical that he has now announced he is working with Danish upholstery fabric makers Kvadrat and launching a collection. The initial contact between Simons and Kvadrat was back in 2010. At the time, Simons was “the” brains behind the Jil Sander Collection and was on the lookout for thick, durable fabrics for his women’s collection – which featured countless allusions to post-War fashions. In Kvadrat’s Milan showroom he spotted what he wanted, and the fabrics created by the Danish upholstery buffs were suddenly to be seen on the catwalk. About two years ago the contact was renewed. One of Kvadrat’s designer Fanny Aronsen had suddenly died, a victim of cancer, and Kvadrat was looking for new ideas. Peter Saville, London-based creative adviser to Kvadrat, mentioned his friend Raf Simons might be interested.

Simons, who had just been named fashion head at Christian Dior, took up the baton. He loves doing lots of different things at once, and also collaborates with Fred Perry, Eastpak and Adidas. Now, after two years’ lead time, the first collection has come up, with 11 different fabrics – and more to follow.

To understand the collection it bears taking a closer look at the work of fashion-maker Raf Simons. Now 46, Simons was born in Belgium, dropping out of studying Industrial Design in Genk to pursue a career in fashion. He headed for Antwerp, and in 1995 founded his own men’s fashion label there, opting for an idiom inspired by the music of the Eighties, influenced by bands such as Joy Divison, Kraftwerk or New Order. He created a new style with his slender suits, and he dressed thin, pale young men in them. And his career has soared ever since: In 2005, the Prada group hired him for the Jil Sander brand. And Simons proved that he could do fashion for women, too. Once again establishing a new yardstick: With his special feel for colors and materials it was he who heralded the new strongly colorful approach in recent years both at Prada and at Jil Sander. In 2011 he quit Jil Sander to allow the founder to rejoin what had been her label. And only a year later Raf Simons mounted the Olympus of fashion, succeeding John Galliano at Parisian haute couturiers Christian Dior. There he has created a quite unique and expressive style each season, for all the subtle borrowings from Dior’s New Look.

For all his popularity, his talent and his success, Raf Simons is not one of the fashion designers like Karl Lagerfeld, who bask in publicity and press coverage. In fact, he shies the public limelight, and there are as good as no portrait photos of him. People say he is a busy bee, one who likes to look beyond the confines of the profession. He admires and collects contemporary art, for example pieces by Mike Kelley, Paul McCarthy, Cindy Sherman, Christopher Wool and Brian Calvin – and he is friends with US artist Sterling Ruby, with whom he has often collaborated. For example, on Raf Simons’ latest show, in January, when he sent the models down the catwalk displaying pullovers with rags sewn onto them, or in flecked shirts and pants – as if they’d just been painting. It has a lot to do with nerviness, dynamism, and of course Punk. And sees Simons once again responding to compelling social issues, from recycling to the rebellion by young no-future youths in Europe. A charming note: The rags incidentally stem in part from Kvadrat.

Giving the past a new twist

Perhaps the relationship between Raf Simons and Kvadrat can best be described as follows: In the case of the fashion man and the textile experts it’s a bit like people who have an affair, lose sight of each other, and then enter into a permanent bond that attests to their ardent love for each other. Raf Simons himself says: “When I started working with Kvadrat while at Jil Sander, I was truly fascinated by the fabrics, the color choices, the great quality, and the marvelous melanges.” And now, collaborating continuously with them, he loves their feel for “straight lines, restraint and quality.” This time his sources of inspiration were again the 1950s and 1960s, fashion designers such as Hans Wegner, Jean Prouvé and Charlotte Perriand, and French architect Jean Royère. Simons confesses that “I didn’t want to shock, but to give this world that I so admire and respect a new twist.”

One can clearly sense his feel for fashion in the fabrics that he designed for Kvadrat. Of the 11 different textiles, five art color updates of designs by Fanny Aronsen. Then there is a small accessories line made up of cushions and couch blankets made of the new clothes. Raf Simons comments that “we made use of many textiles from fashion. Namely textiles that cannot be used for furniture given their weave – bouclés and tweeds and so forth.” Simons explains that these fabrics had to be completely redeveloped to achieve the same visual effect but in a quality appropriate for furniture.

The result is astonishing: a veritable color fireworks, an array of finely differentiated textures and structures. The most eye-catching, indeed truly extravagant new creations include “Argo”, a hide-like fabric made of shimmering mohair, and “Astor”, with a texture reminiscent of the dense, smooth and gleaming fur of a beaver. In the form of “Pillar”, Simons has created a compact, velvety velour that stands out in eight brilliantly sharp colors, and quite evidently attests to his love of Fifties and Sixties’ interiors. He goes for a sense of movement in “Pilot”, “Sonar 1” and “Sonar 2”: With Bouclé yarns, partly with a strand of Merino wool, forming exciting weaves. In all three refined clothes one invariably thinks of high-grade woolen suits.

The colors make a strong statement, in particular with the updates of the Fanny Aronsen textiles used for “Balder”, “Haakon 2”, “Harald 2”, “Sunniva 2” and “Vidar 2”. Eccentric pinks, oranges and radiant dazzling blues meet wine red, black or grey. Creating unusual color compositions, and the colorful world of Memphis with its very special dialectics of color seems to have gained a new lease of life under Raf Simons at Kvadrat. Such striking and contemporary color concepts are all the rage precisely today, when interiors are becoming more colorful and more fun,.

After working with Alfredo Häberli, Olafur Eliasson, Patricia Urquiola and most recently the Bouroullec brothers, by choosing Raf Simons Kvadrat is making a clear statement: Furniture and covers can, indeed must, have fashionable touches, have their finger on the pulse of today. It’ll be interesting to see how the fabrics work when they embraces armchairs and sofas.

Hallingdal and its successors: What would Verner Panton’s furniture be like without the bright fabrics from Kvadrat? Now there’s a book describing the company, which is one of the world’s leading makers of home textiles today. A glance behind the scene.
(01 November 2013) 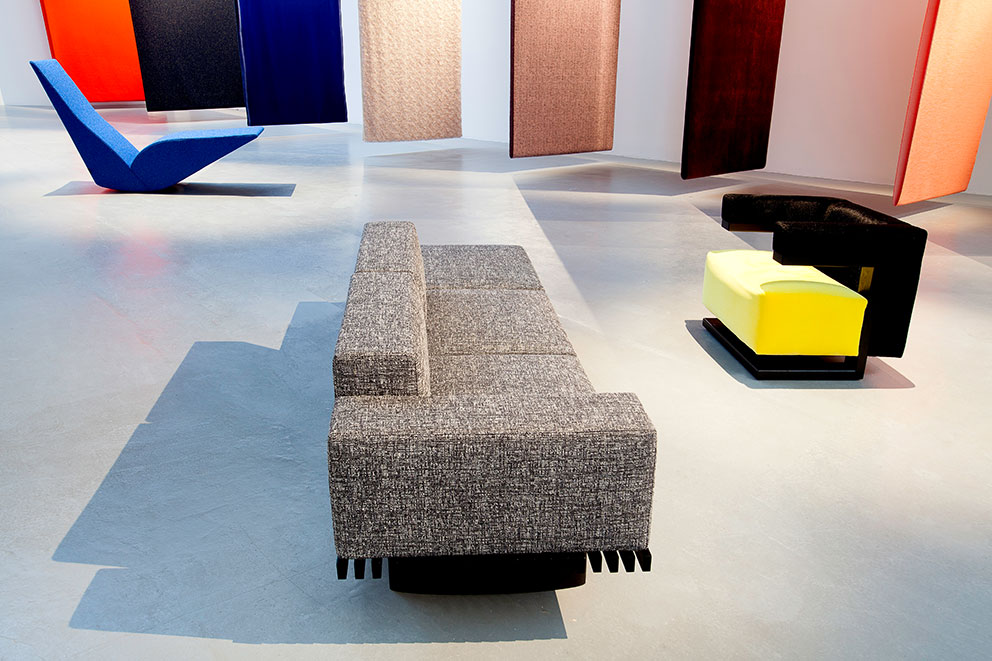 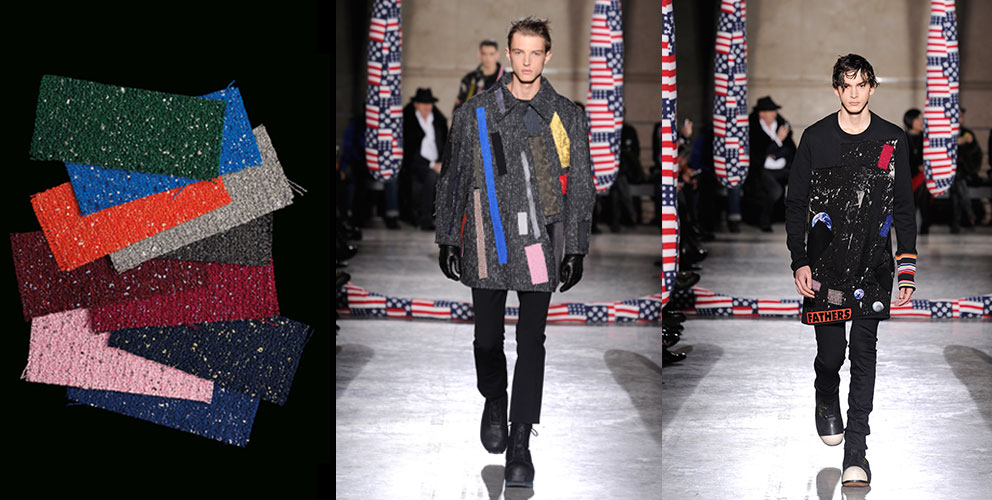 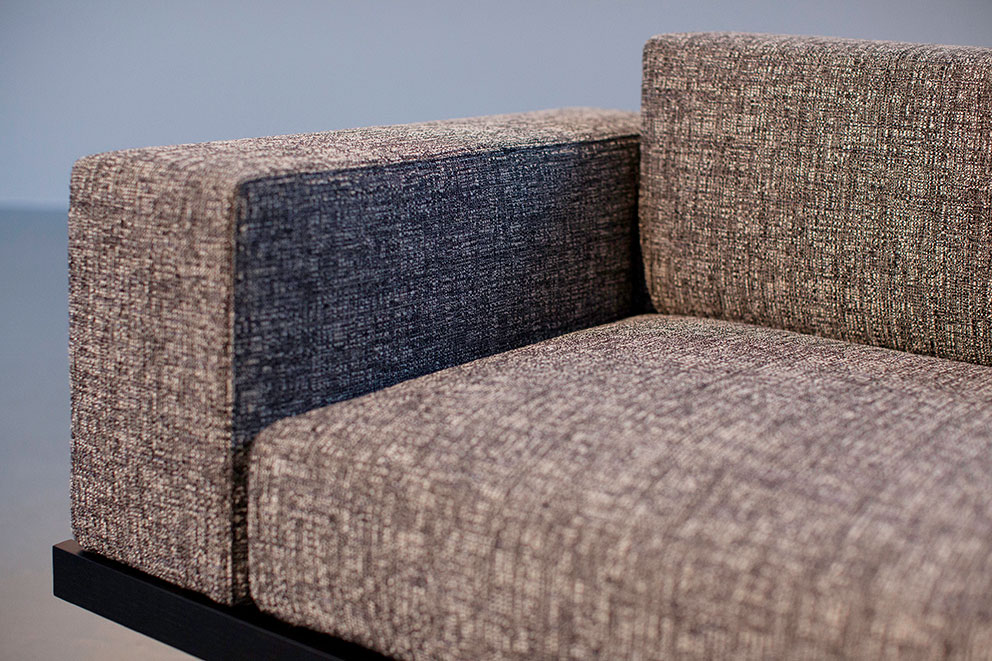 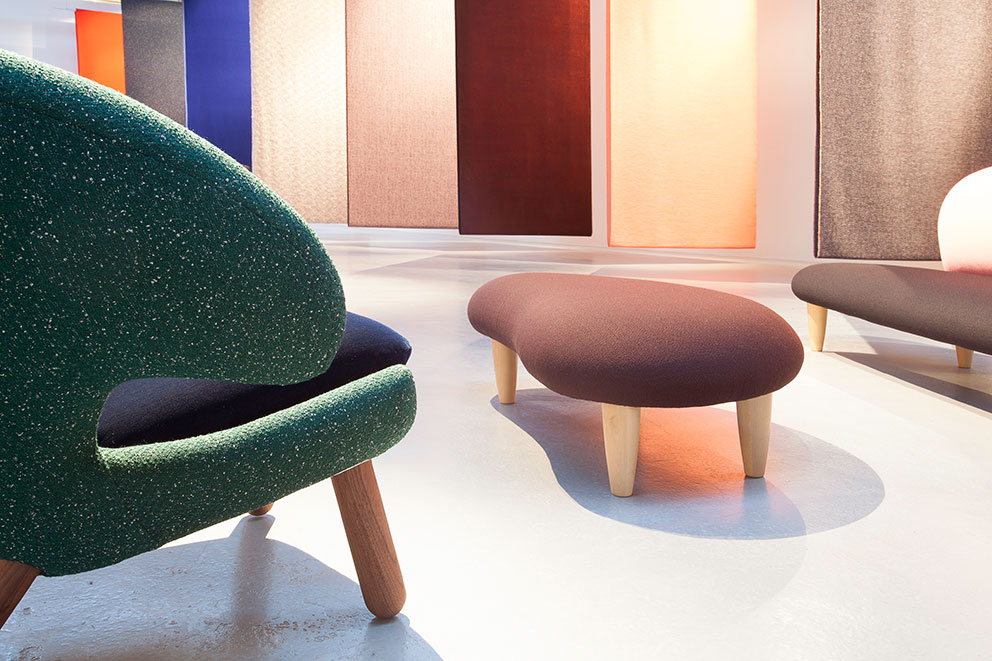 Cuddle guarantee: armchair at the left side is upholstered with „Pilot“, the stool in the middle with “Pillar“. Photo © Kvadrat 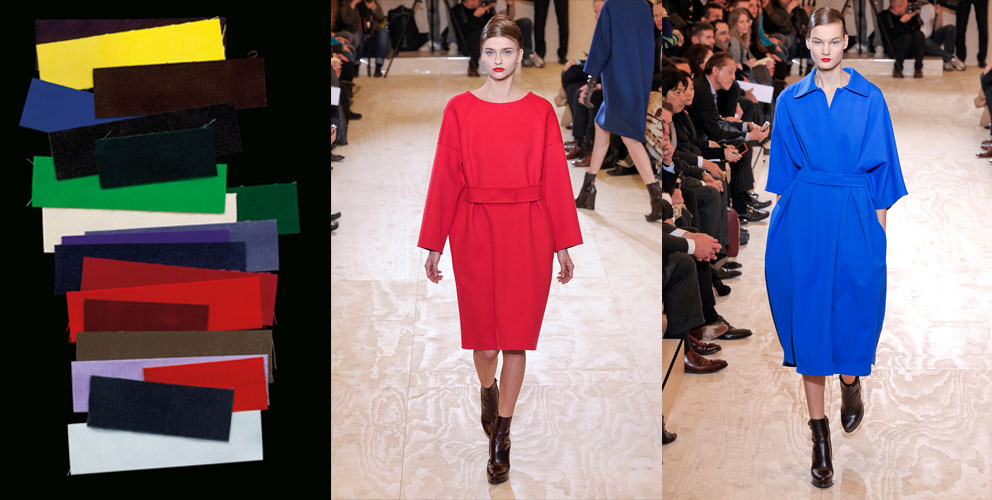 “Harald 2“, as well an recoloring of a Fanny Aronsen fabric, offers a color range which we know from Jil Sander by Raf Simons (pics right: Jil Sander f/w 2011). Photos © Kvadrat/imaxtree.com 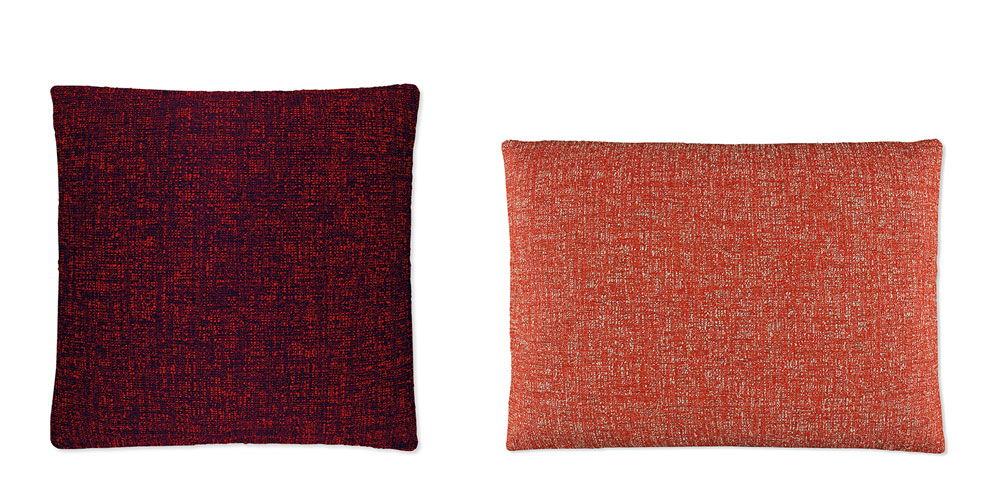 Accessories pimping up the couch: cushions made out of „Sonar 2“. Photo © Kvadrat 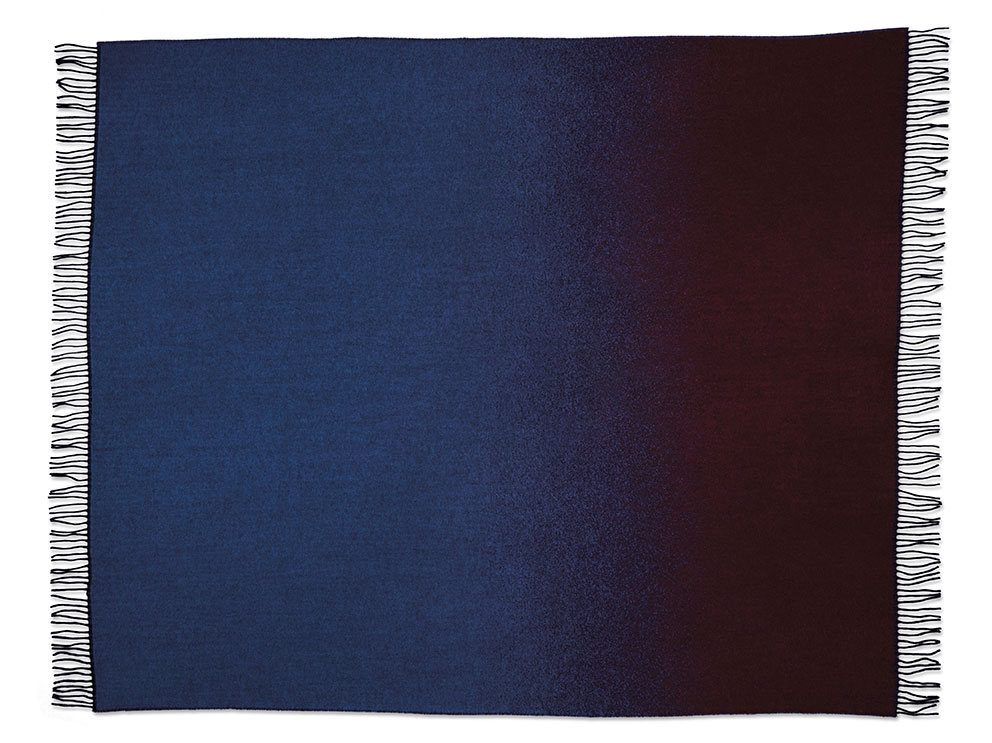 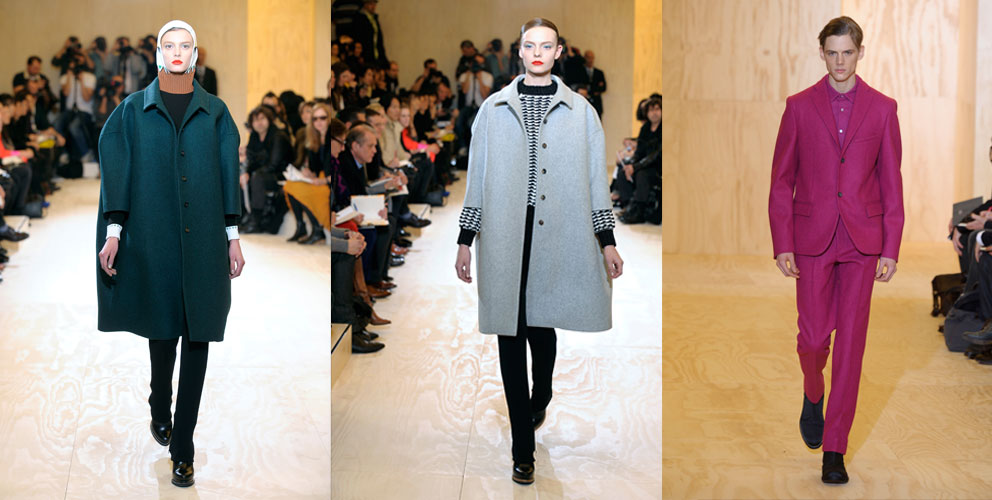