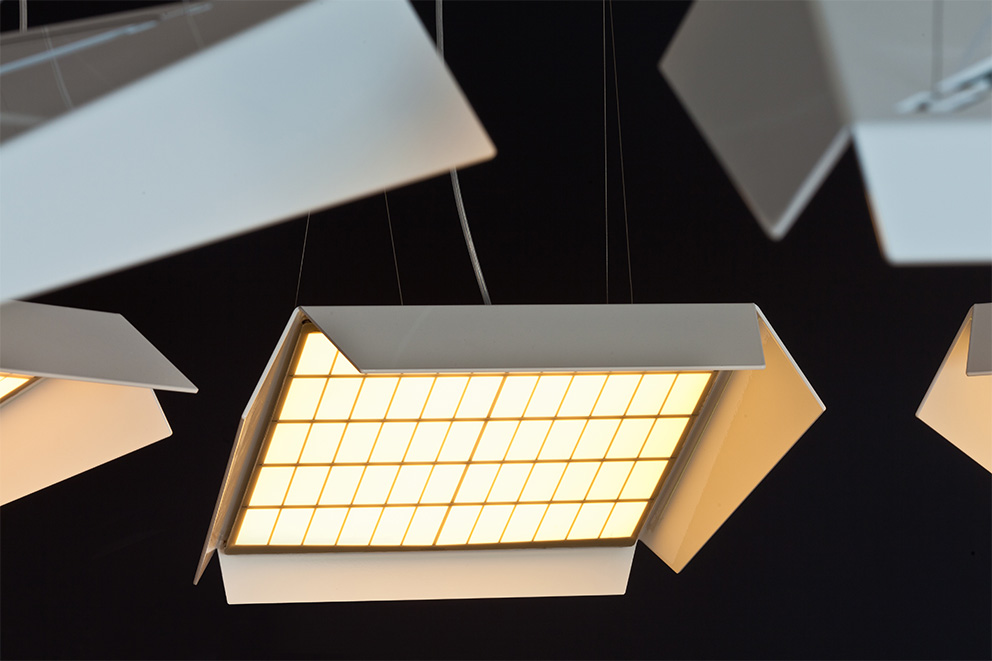 Presumably it is the light that between March 30 and April 4, 2014 will once again attract creative professionals and designers to Frankfurt. Though far more technical in nature than Euroluce, its Italian counterpart held during Milan’s Salone di Mobile, Light+Building pulls a whole host of design-oriented exhibitors. That said, in light of the LED’s omnipresence the interplay between technology and design has become more important than ever: After all, precisely in the area of LED luminaires new technical means are what shape the conceptual designs.

LED: After the revolution comes the evolution

So what innovations are awaiting us at Light+Building 2014? Naturally, manufacturers are keeping a low profile, while the announcements by the exhibition organizers have a familiar ring to them: Intelligent sustainability, smart powered buildings, man and light – that does not so much suggest cutting-edge trends as rather a continuation of the major themes of recent years.

If this surmise proves correct exhibitors will focus on showing the latest in LED technology which, unlike conventional illuminants, still offers scope for true innovations. It follows that Design Plus, a competition for pioneering product achievements, will primarily showcase creations involving LED technology. Though the revolution is over, evolution does continue: Luminaire makers are concentrating on topics such as product aging, replacement modules and standardization.

Now that market leaders in the lighting industry have switched over entirely to LEDs the emphasis is on new product ideas and a design that was previously impossible to achieve using conventional light sources. Such firms are focusing on miniaturized shapes, the use of plastics, the integration of furniture and a new space and façade design. Manufacturers now have access to increasingly powerful LED modules and control electronics in the form of semi-finished products and – just like the low-volt halogen technology of the early 1980s – this development looks set to spawn a host of small, new suppliers with original design ideas. Moreover, owners of design classics can also breathe a sigh of relief: Increasing diversity is likewise evident in the range of retrofit LED-lamps, which allow many conventional luminaires to be used without any loss of quality, yet still offering energy savings.

On the same wavelength: man and light

In addition, there is increasing interest in the impact light has on the human bio-organism. Light can be employed to have a stimulating effect: by altering the light color LED luminaire systems can, for instance, enhance concentration, or in rooms without daylight simulate the natural course of light, employing a high share of red in the early morning and evening and a higher amount of blue in the late morning and afternoon. According to the latest findings, the colder the light color the more it activates the nervous system. Meaning there is magnificent scope for putting such insights to use, for example in the workplace, in clinics or in care facilities.

Market leaders such as Zumtobel are also set to showcase new systems in conjunction with this: Allegedly, “limbic lighting” impacts directly on the brain stem and evokes positive emotions, at least this is the promise of the manufacturer who in collaboration with the Nymphenburg Group is going to present a study based on neuroscientific findings. The Philips corporation has together with Apple secured a competitive edge as regards private consumers: At the start of 2013 it showcased “Hue”, a set comprising an iPhone app, a wireless gateway and three LED bulbs, whose brightness and color can be controlled. Meaning the color reproduction in ambient lighting can be remotely adjusted to suit individual needs.

OLED: once again close to a breakthrough

In recent years organic light emitting diodes were presented at every fair in the guise of intriguing prototypes, only to vanish soon again from visitors’ consciousness. Once again in 2014 spectacular ideas will be showcased, there are even several applications on the books. With the “Lumiblade Module” Philips is offering a five-millimeter-thin orientation sign that thanks to the integration of OLEDs gives off an even light onto the glass plates. Measuring just 210 x 105 millimeters, the modules can be produced without a problem in existing production plants; the production of larger OLED elements is not yet feasible. Only with a reliable roll-to-roll process will larger formats become possible, and above all affordable. The Fraunhofer Institute and Tridonic are addressing this considerable challenge with their R2flex project.

Recently, Tridonic presented an OLED element with an output of 50 lumen per watt and an output of 70 lumen with an area of 200 x 50 millimeters. By comparison: A conventional light bulb produces around 10-15 lumen per watt. Size is one issue; ensuring the airtight encasing of the organic polymers likewise remains a problem. If the polymers come into contract with air their product life sinks rapidly. For its emergency light Philips claims a lifespan of five years.

Even if factors such as product life, size, light performance and light quality do improve from one fair to the next, strictly speaking OLEDs are still at the research stage, meaning that mass production of items for everyday use is not yet possible. Nonetheless, considering the potential of OLEDs patience could indeed pay off. After all, with their soft ambient light they are considered the ideal complement to the bundled light offered by LEDs. There is no doubt that designers will let themselves be inspired by this technology to create totally new concepts. 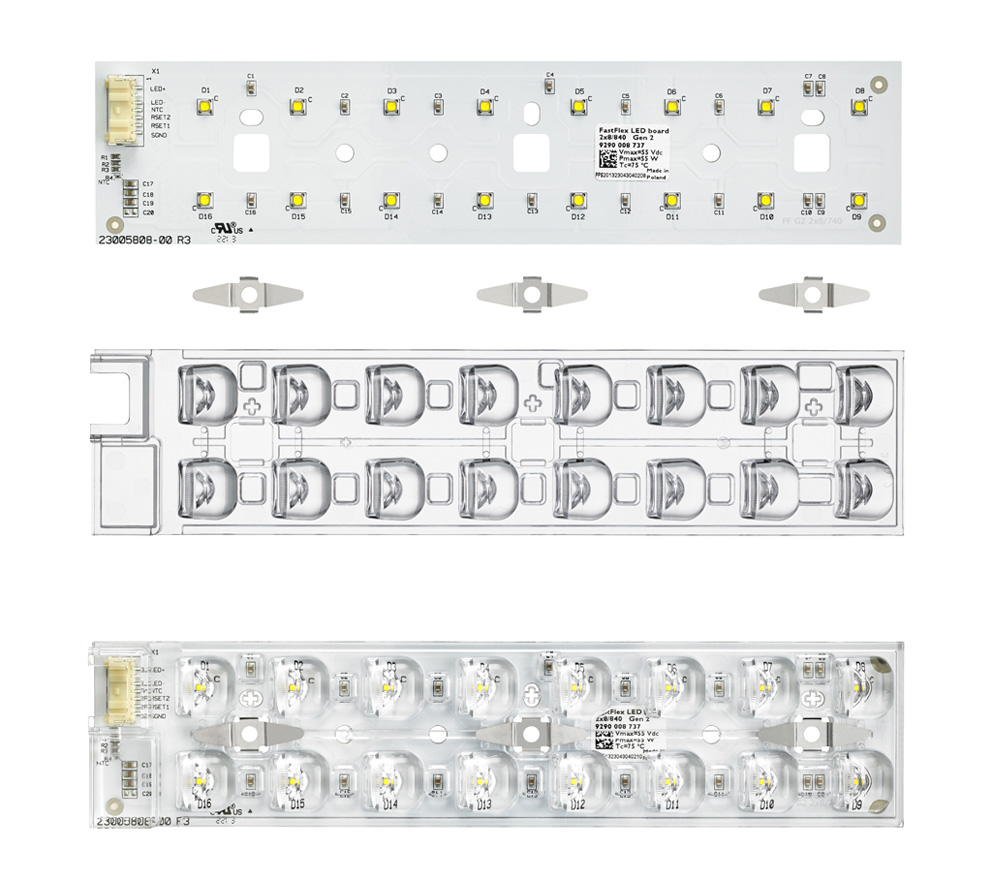 The “FastFlex LED-Modul” was developed for outdoor and industrial illumination and consists of an LED circuit board and a casing with a selection of lenses that can deliver a broad variety of different beam patterns. Photo © Philips 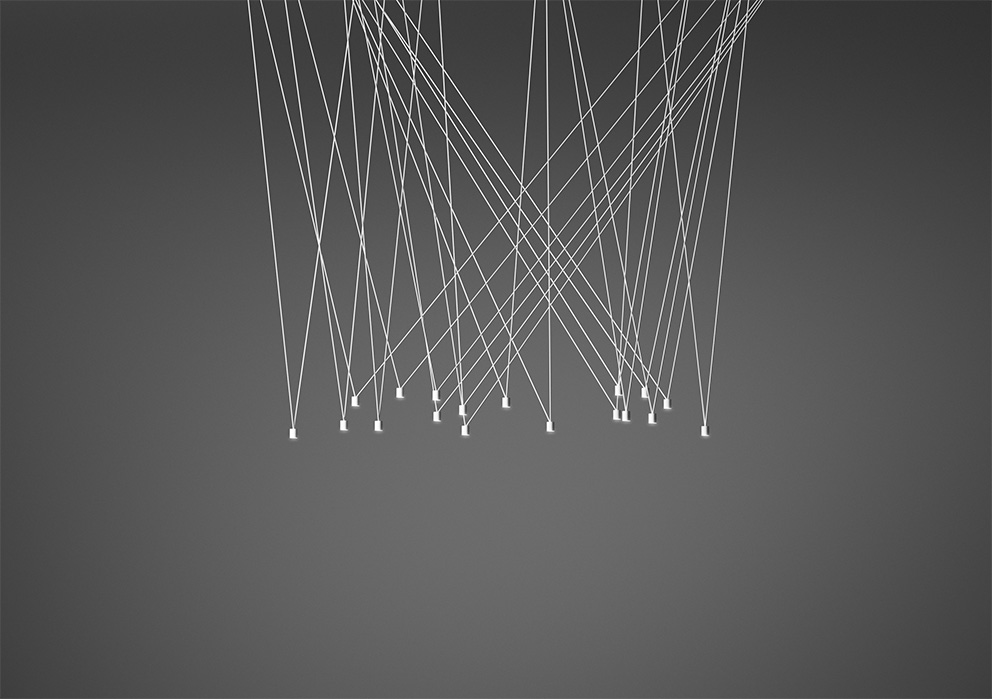 “Match” consists of individually added LED elements, each with an output of 3 Watts – on the end of a thin aluminum rod – creating refined light sculptures calibrated to fit the respective space. Photo © Vibia 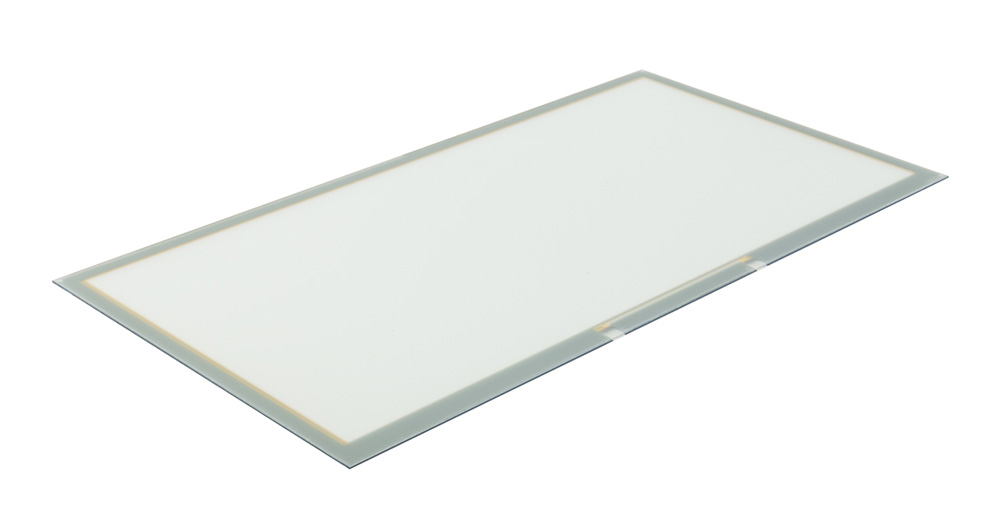 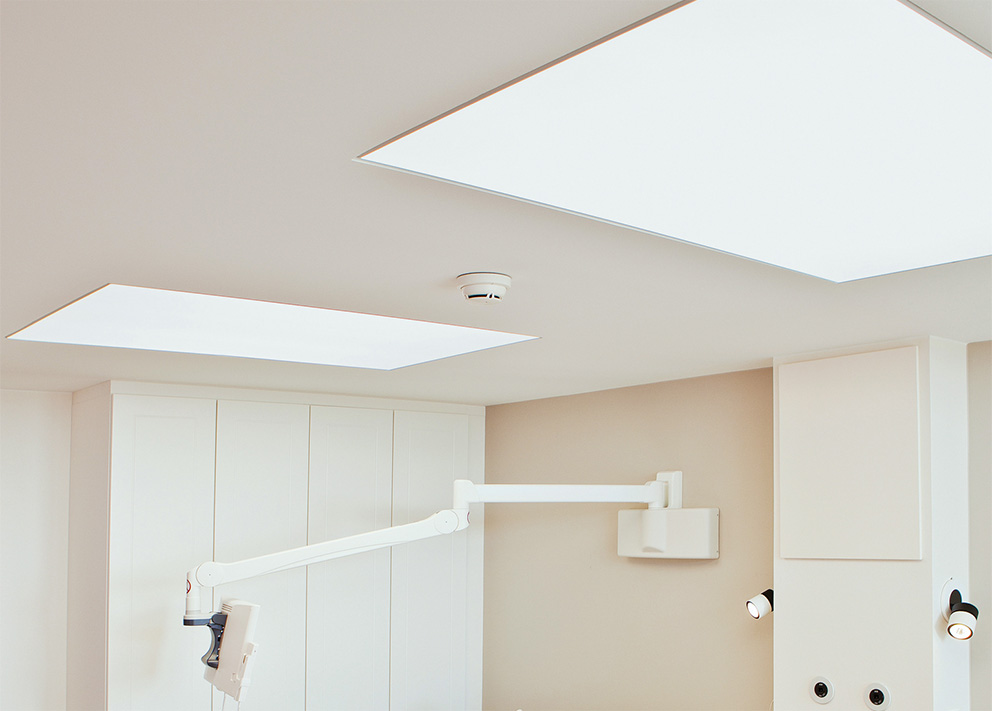 The “HealWell” lighting control system is being used in Hamburg’s Asklepios Klinik to support each patient’s circadian rhythm. Photo © Philips 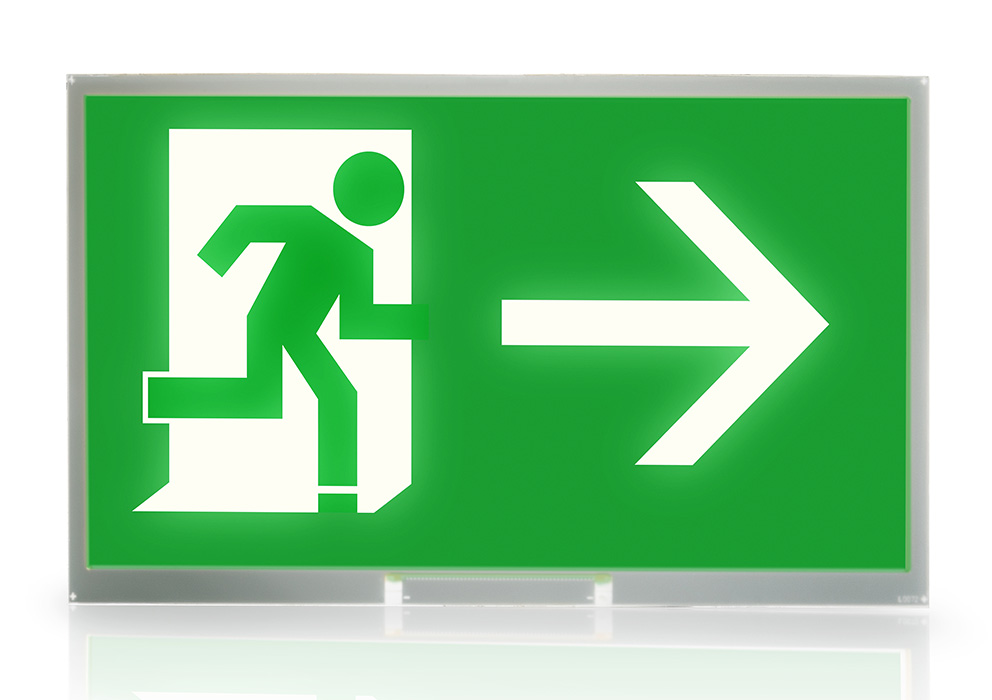 Homogeneous area light is one of the most interesting properties of the OLEDs that Philips has used here for the first time for permanently illuminated signs. Photo © Philips 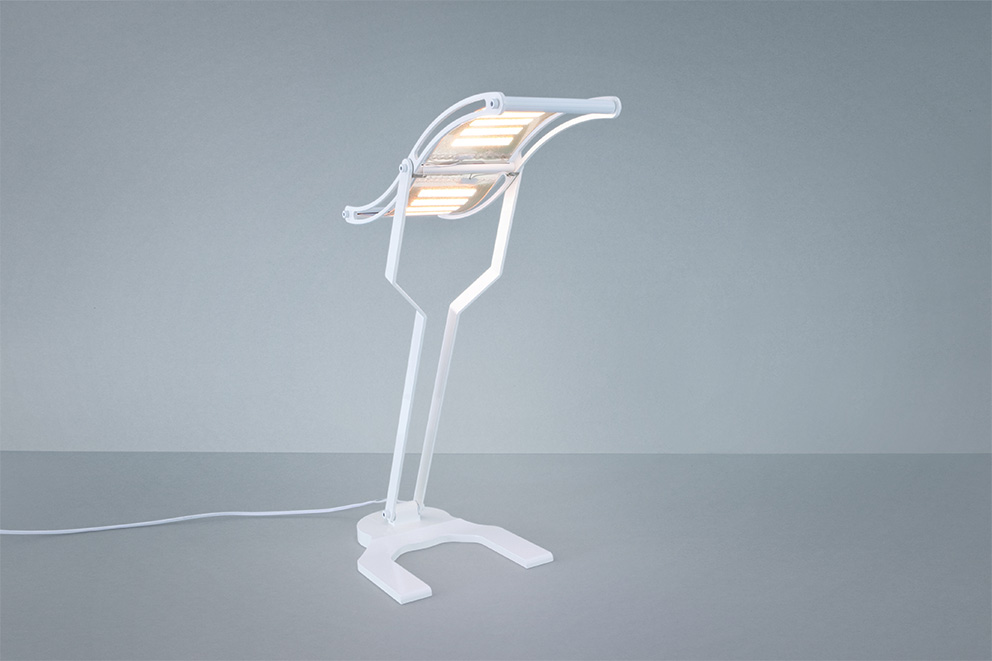 This model of a table lamp using a flexible number of OLEDs arose as part of the “R2Flex” collaborative project that focuses on roll-to-roll manufacturing of organic construction elements. Photo © Tridonic 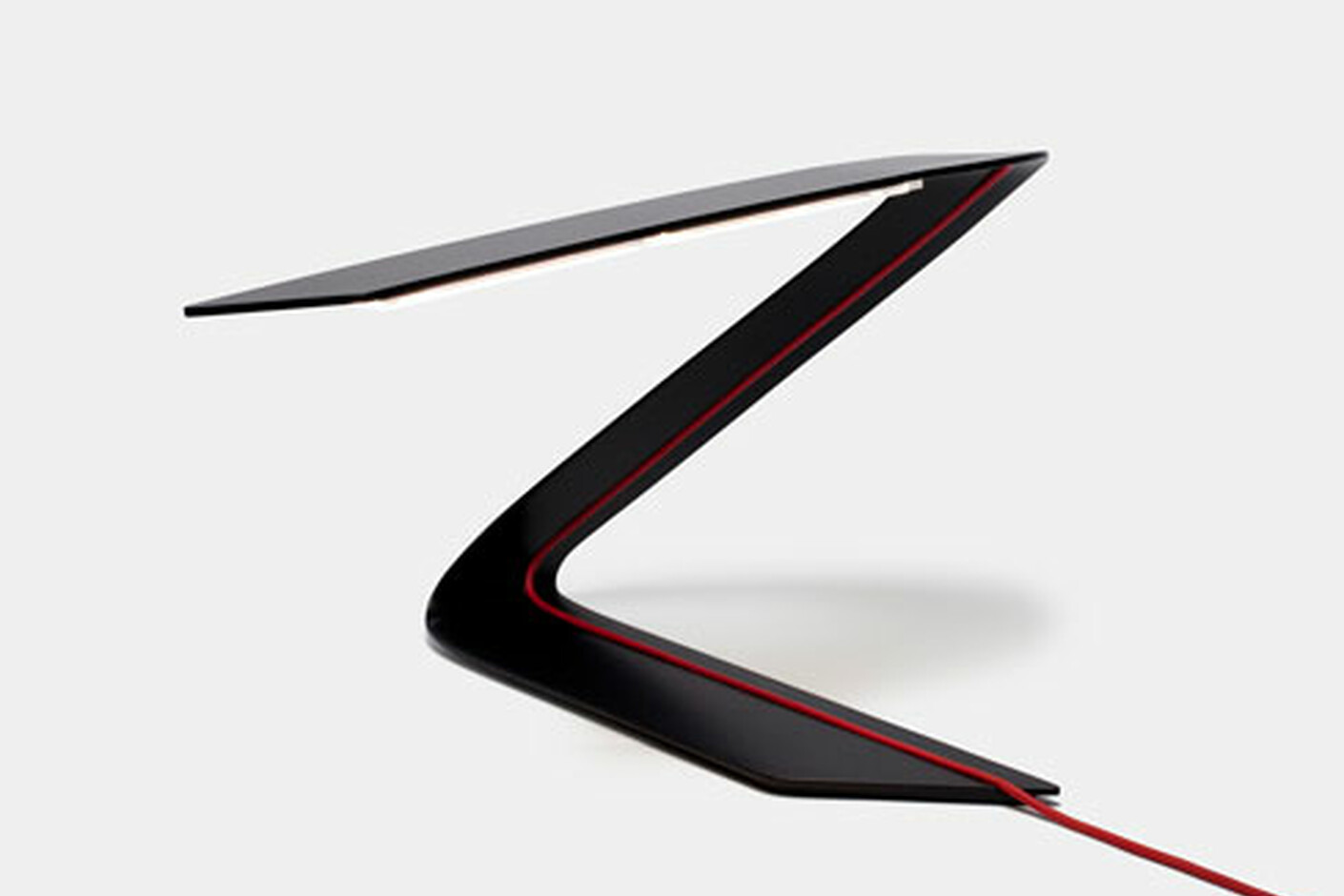 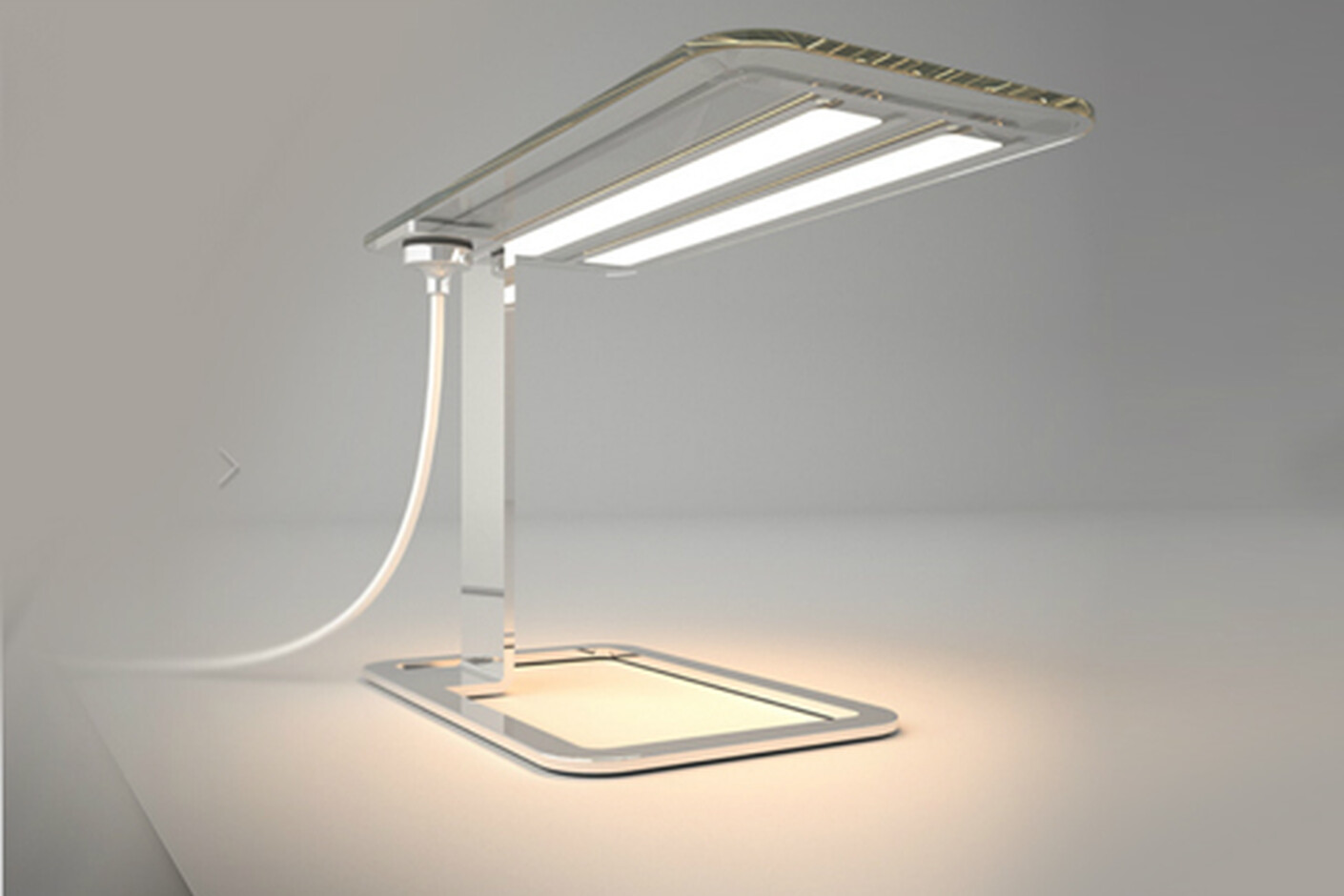