top
Light in the age of political correctness
von Thomas Edelmann | May 12, 2009

We tend to be attracted by those things that are forbidden: Ever since word got around that as of September the first phase of a EU norm resolved by the EU Commission comes into force banning certain types of lamps, many retailers are reporting a run on 100W bulbs, as they will be the first to come under the injunction. Meaning that the norm may indirectly affect those design classics whose lamps are now considered politically incorrect. For example, "Toio", designed by Achille and Pier Giacomo Castiglioni in 1962 relies on a special 300W spotlight lamp used before that date exclusively for US autos. "Toio" was innovative because it for the first time introduced indirect light into living rooms, enabling a new mood of lighting that was a true revelation. The simplicity with which the Castiglionis deployed a thin metal rod as the spine and the height adjustment remains awe-inspiring to this day. The power cable is attached with fishing-rod rings, and a massive metal structure functions as the base. The transformer is positioned close to the floor, switches between US and European voltages, and also serves to provide stability. Today, the luminaire seems as refreshing as it did originally and also as politically incorrect as a smoker in a new film. Yet manufacturer Flos presented the "Toio" and other milestones of design history simply as a matter of course in the midst of a specially staged setting on its trade-fair stand in Milan. A confident statement with the message: "Toio" must not die, we will make certain that bulbs are available!

Nevertheless, alongside the forever topical issue of the shape for the lamps we use in the world around us, the mandatory change in lamps was one of the other key issues addressed at the Euroluce in Milan and at the accompanying events at the Fuorisalone.

Ingo Maurer, luminaire maker and researcher into new lamps is a self-confessed champion of the old bulbs, which, as he says, "cut him to the quick" at an early age. At a pavilion in the courtyard of the Spazio Krizia he highlighted the absurdity of outlawing lamps. "An icon disappears without there having been any public debate on the meaningfulness of the campaign." Maurer masterfully presented just how absurd his luminaires will look once outfitted with energy-saving lamps. "No one feels good in the presence of such light. The psychiatrists would have a field day if we lived in a world illuminated only by the light of the energy saving lamps," Maurer says. And also "called on everyone to opt for civil disobedience." At the Euroluce he then presented a "Euro Condom" for clear lamps that then disseminate the same diffuse light offered by the banned lamps that will be the first to disappear from the markets.

serien lighting distributed 1,000 lamps as a limited and numbered edition in order to celebrate the "the well-deserving lamp's impending retirement as decreed by the EU". The vast majority of new products have long since been capable of taking other lamps that deliver efficient and pleasant light. It swiftly becomes clear that there cannot be the one good, energy-saving device. And presumably the energy-saving lamps will play a backseat as regards discerning lighting requirements. While in past years, decorative light played second fiddle to the technologically cutting-edge luminaire systems, designers and manufacturers are now using decorative luminaires with new lamps with improved properties. Energy-saving halogen lamps and the new, especially light-intensive and white LEDs tend to set the trend.

Light is a complex material. Anyone focusing solely on the watts will miss many another dimension, some of which are quantifiable, even if lay viewers probably will not want to bother to notice them. For example, the correct interaction of color reproduction (measured in Ra), color temperature (measured in Kelvin), light flow (Lumen) is important, light yield (Lumen per Watt) and light intensity (Lumen per surface, measured in Lux) are all relevant indicators above all if what is required is not just highlights, but reading light, or light in which to view things and fell good in. Providing comprehensible information for a vexed buying public is more important than ever before. For example, Flos not only presented a veritable fireworks of new products, but always offered info on the light yield, color temperature and the lamp chosen for the task.

Instead of rejection and irony, manufacturers and designers have responded with a variety of strategies to adapt to the new situation. Artemide launched an entire product series designed by Ross Lovegrove, who for his Cosmic series has a transparent plastic element swing from the ceiling to create diffused light, and creates indirect light by means of an aluminum sail that seems to float in front of the wall and ceiling. Another of the Cosmics uses metal halide lamps, visible behind a transparent plastic shade. Much discussed was Zaha Hadid's Genesy, reminiscent of Hector Guimard entranceways to the Metro in Paris.

Striking new energy-saving versions were on display of Michele De Lucchi and Giancarlo Fassina "Tolomeo" luminaire, designed back in 1987. To date, it is an indispensable sales-spinner for Artemide, with the basic version having already sold 4 million times. Formally speaking, the new versions are almost indistinguishable from their predecessor. The "Fluo 18W" hides the fluorescent lamp behind a grid, and the LED and "LED My white light" versions are also interesting. In the latter, the color temperature can be switched from warm through to cold light. Anyone simply wishing to save 30 percent energy can opt for a 70W halogen lamp. Which is what the standard model will in future use. 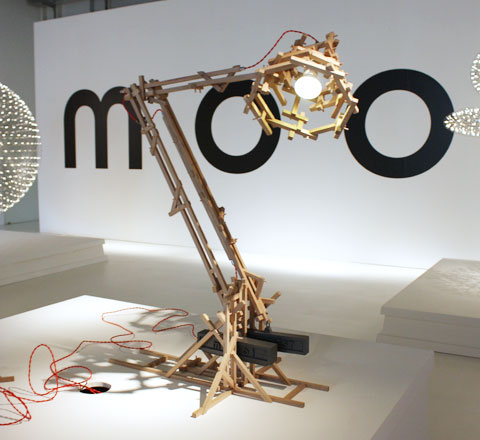 s. Two large iron counterweights ensure accurate positioning of the luminaire, which is made up of over 300 pieces of oak. 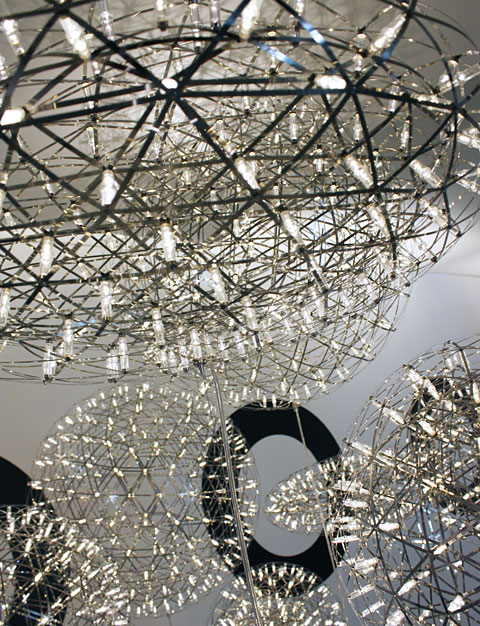 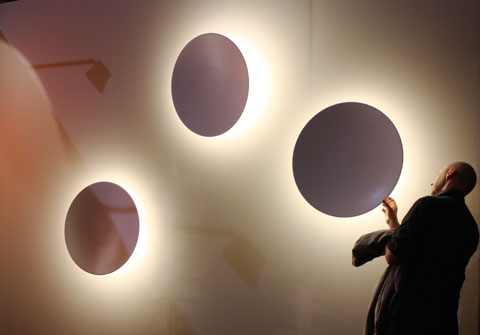 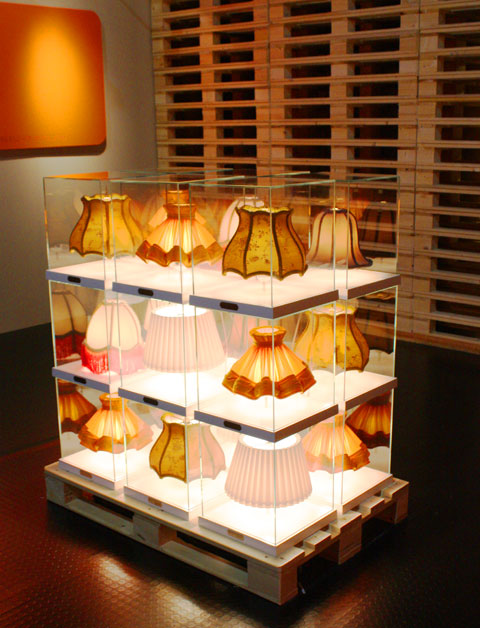 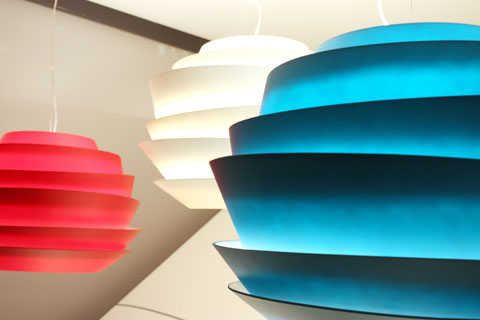 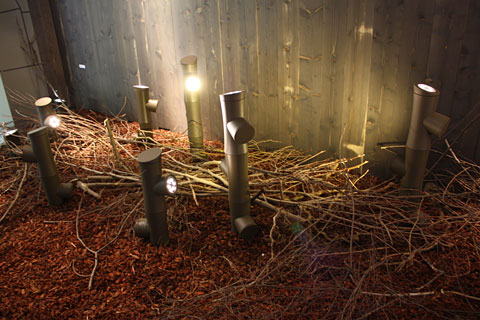 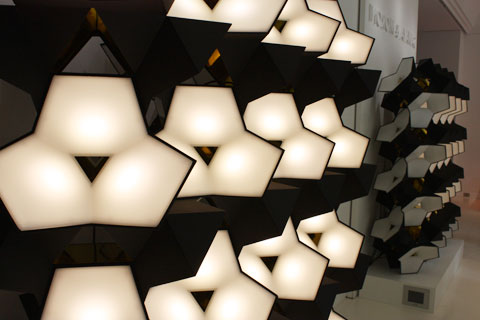 Starbrick by Olafur Eliasson for Zumtobel 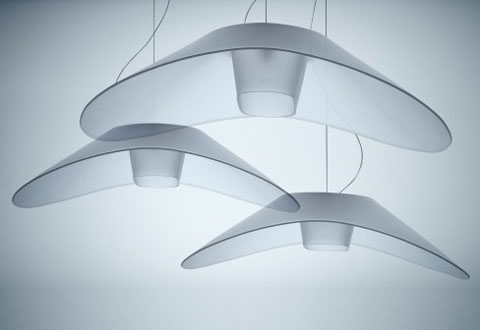 “Fly-Flay” by Ludovica and Roberto Palomba for Foscarini stands out for its elegant and light appearance. The pendular luminaire has a 300W halogen lamp, is made of injection-molded polycarbonate. 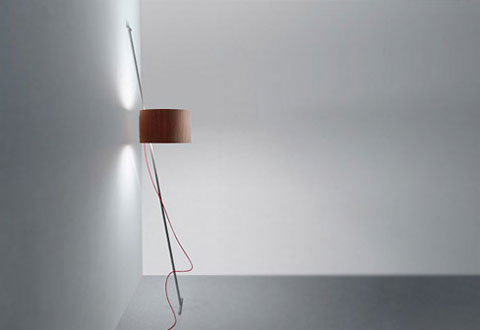 odel is “Lift”, is leant against a wall, and has a height-adjustable shade of slightly translucent wood veneer. 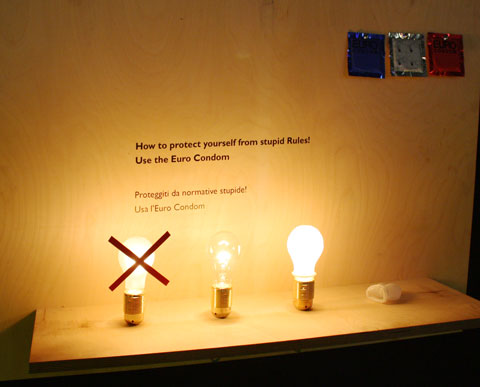 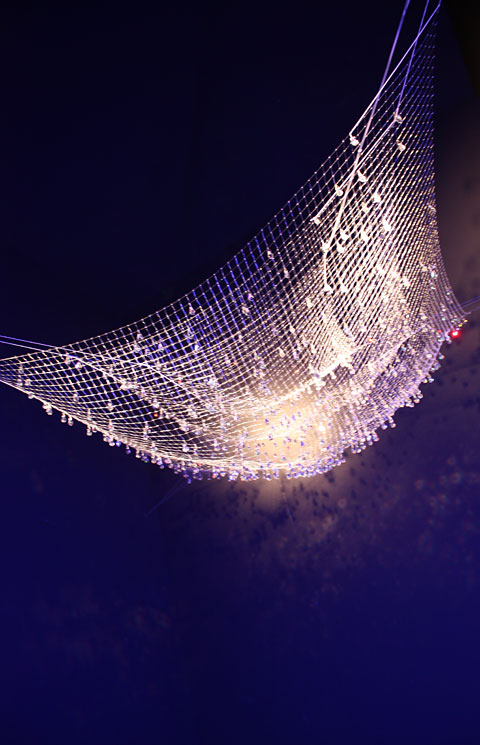 nets. His “Zufall” luminaire is made up of a colored, flexible silicon body and a compact halogen lamp. Photo © Dimitrios Tsatsas, Stylepark 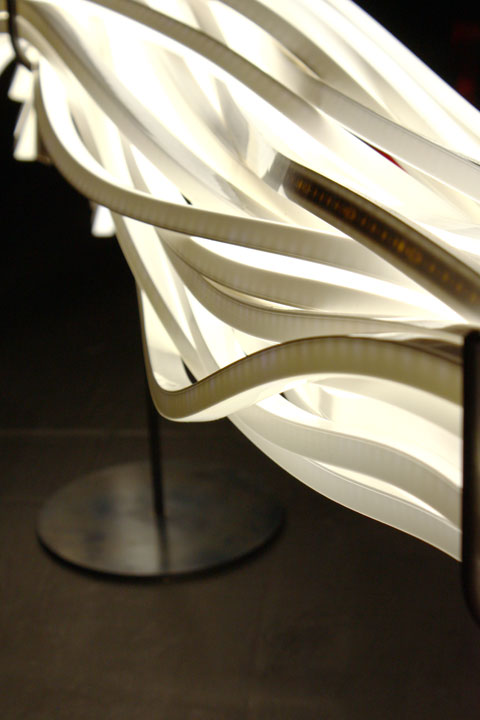 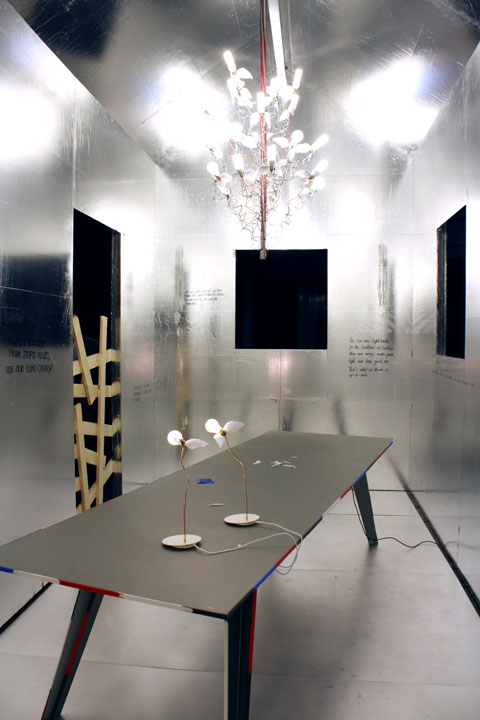 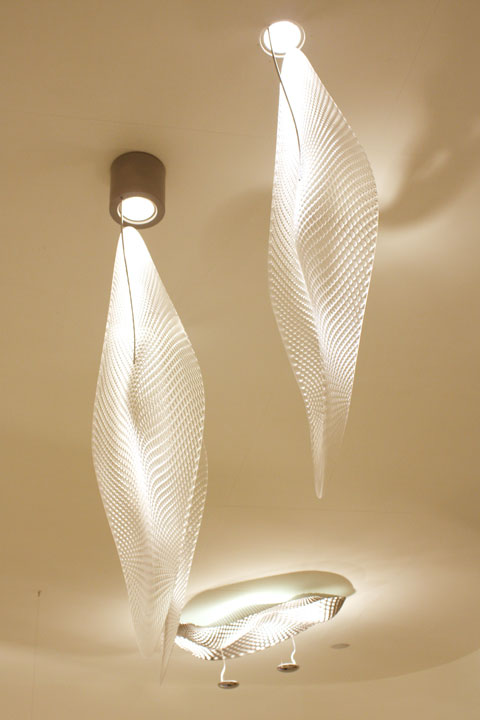 Cosmic by Ross Lovegrove for Artemide 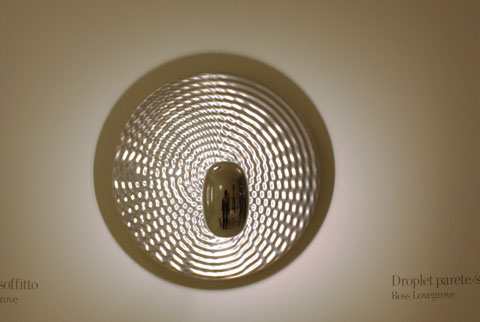 Droplet by Ross Lovegrove for Artemide 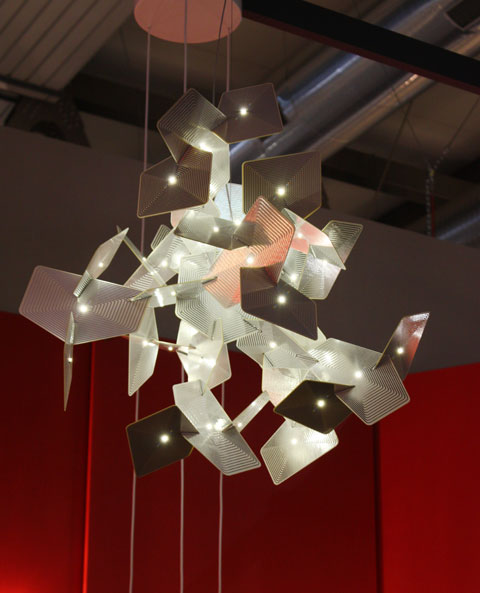 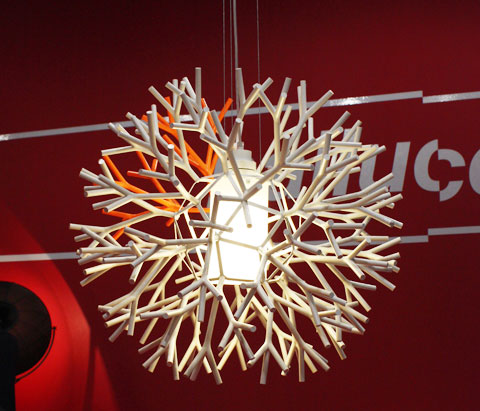 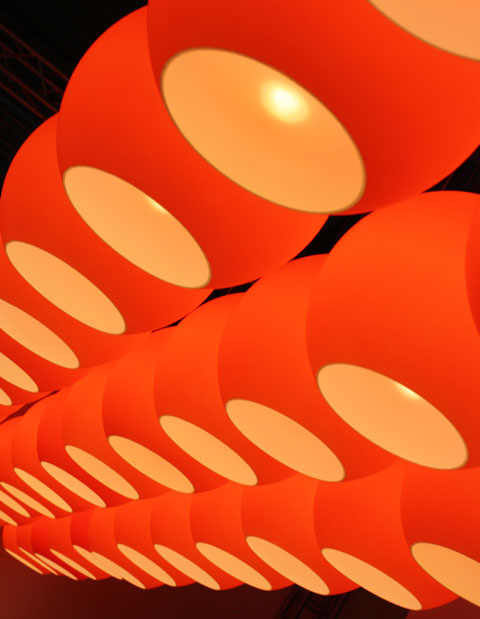