Often things tend to get slightly forgotten if they have become classics. For example, who really wants to re-read those books that they had to study at school as the classics of world literature. And thus, sadly, books that nevertheless somehow accompany us through life get ignored for years if not decades. At some point, you then find yourself coming across them again by chance, opening them, and being captivated. It is no different when it comes to things that you discovered for yourself, say as a student - only then to find out that they were long since classics popular with a great number of people. This can cause you to forget the zest of that first love, and you end up encountering countless interpretations, hearing countless opinions, and at some point "know" them so well that you lose interest in them and they quietly recede into the wings, with new things taking center stage.

No doubt many people see objects by Charles and Ray Eames as such ‘first loves'. My God, the Lounge Chair! The Case Study House! The beauty of everyday objects! Those were the days! And now all those who thus fell in love first time round are busy working away on their own designs, racing from one design fair to the next, attending furniture shows and conferences, phoning, mailing and surfing - and actually are really in need of a vacation from all the craziness. While that first love is still alive, it resides some pale and worn under a huge pile of yellowing To-Do notes. And awful things have happened in the interim.

Along with "Pantone", "Eames" is the most abused name if you browse ebay's "design classics" section. There, forever similar orange-colored plastic uglies and shapeless upholstered furniture from the 1970s throng under the irritating and shameless heading of "Eames Era". At the other end of the scale, you will find the high-price originals: The Lounge Chair today is a status symbol attesting to traditional values, positioned in well-tempered lofts and very much at home in the lifestyle of the nouveau-riche. A strange dilemma it is, but it can be escaped joyfully by returning to the origins of everything that goes to make up an Eames design classic: a good idea and its marvelous realization.

Fortunately, those great films the Eames produced still exist. There are about a hundred of them, and in them the Eames repeatedly discover and present new ideas of beauty, be it the pattern of flowing cleaning water on the ground of a school yard (Blacktop, 1952) or the magic of the simplest of toy railways (Toccata for Toy Trains, 1959).

Most readers will no doubt know "The Powers of Ten" (1968, produced for IBM), in which the camera pans in ten steps from a couple enjoying a picnic to the edge of the then known universe, only then to glide into the innermost atomic structures of the hand of the man, which rests on the picnic rug. Once seen, never forgotten.

The Eames' films tell with their elegantly composed images the story of special beauty, of the beauty of the optimistic look at the simplest of things.

A leaf in fall, sun in the afternoon, corn on the cob, a spinning top, all of it becomes powerfully far more magical when observed through the viewfinder of the Eames' camera. And thus, directed by the designer duo themselves, the films on their own furniture became exceptionally edifying little masterpieces that involve the viewer in the development and manufacture of furniture, with no bragging or arrogance, and instead enable us to really enjoy the process.

For example, there is "the fiberglass chairs: something on how they get the way they are" dating from 1970. It becomes abundantly apparent at the beginning of the film, which runs to just short of nine minutes, that fiberglass chairs can actually be very comfortable, as the first image shows a human body being measured in as comfortable a seated position as possible. Throughout the film, the camera remains very close to the action and the manufacturing and thus transforms the one or other hand movement into an abstract composition. From the ergonometric measurement of the body, the film moves on to the design phase. A compass rotates, rulers glide across paper, clay models are molded, measured and improved, and everything melds in a dance of hands and measuring instruments, carefully followed by gentle camera pans. The first third of the film already familiarizes us with the specific material properties of the things used. The tools, made of metal, the transparent plastic rulers on white paper, the organic and moist clay - all of it breathes a truly tangible sensory appeal.

Each movement of the hands is emphasized this time not by Elmer Bernstein's sound, but by Buddy Colette's music, now cheerfullyvivacious, now mondane and lofty. Indistinct guitars and well-tempered flutes jump delightfully from one Cool Jazz rhythm to the next, prompting you to nestle even further in your Lounge Chair, enjoiy your pipe, and listen to see what comes next.

The finished clay model is then copied in fiberglass, and the first casting of the dark clay mold using white fluid matter evokes images of precious icing on the cake. The fiberglass gets smoothed and polished and equally precious colors poured on it. The fiberglass, which sticks out like straw at the edges of the mold, then gets cut off and suddenly we are left with a truly beautiful seating shell. In the film's last third, the camera repeatedly captures faces, but not those of the designers or some dynamic sales manager; rather, we see the craftsmen who are busy assembling the chair. In other words, the sensory appeal of the material gives way to a focus on the crafts processes, and suddenly one chair becomes many chairs. Metal feet are made, fabric covers put in place, and repeatedly we see hands at work. It is almost as if we were watching a traditional workshop and yet we are watching work on a modern fiberglass chair, and at the end the final product is packed into a brown carton with a great bright-red Herman Miller logo on it and awaits a loving owner.

And you immediately find yourself loving this classic of classics once again. And this new love runs deeper than it did first time round, you will remain together forever, and the leaf that blows past on the first wind of autumn, suddenly looks incredibly beautiful.

Charles and Ray Eames' films came out in 2005 as a boxed set of 6 DVDs, published by Image Entertainment. 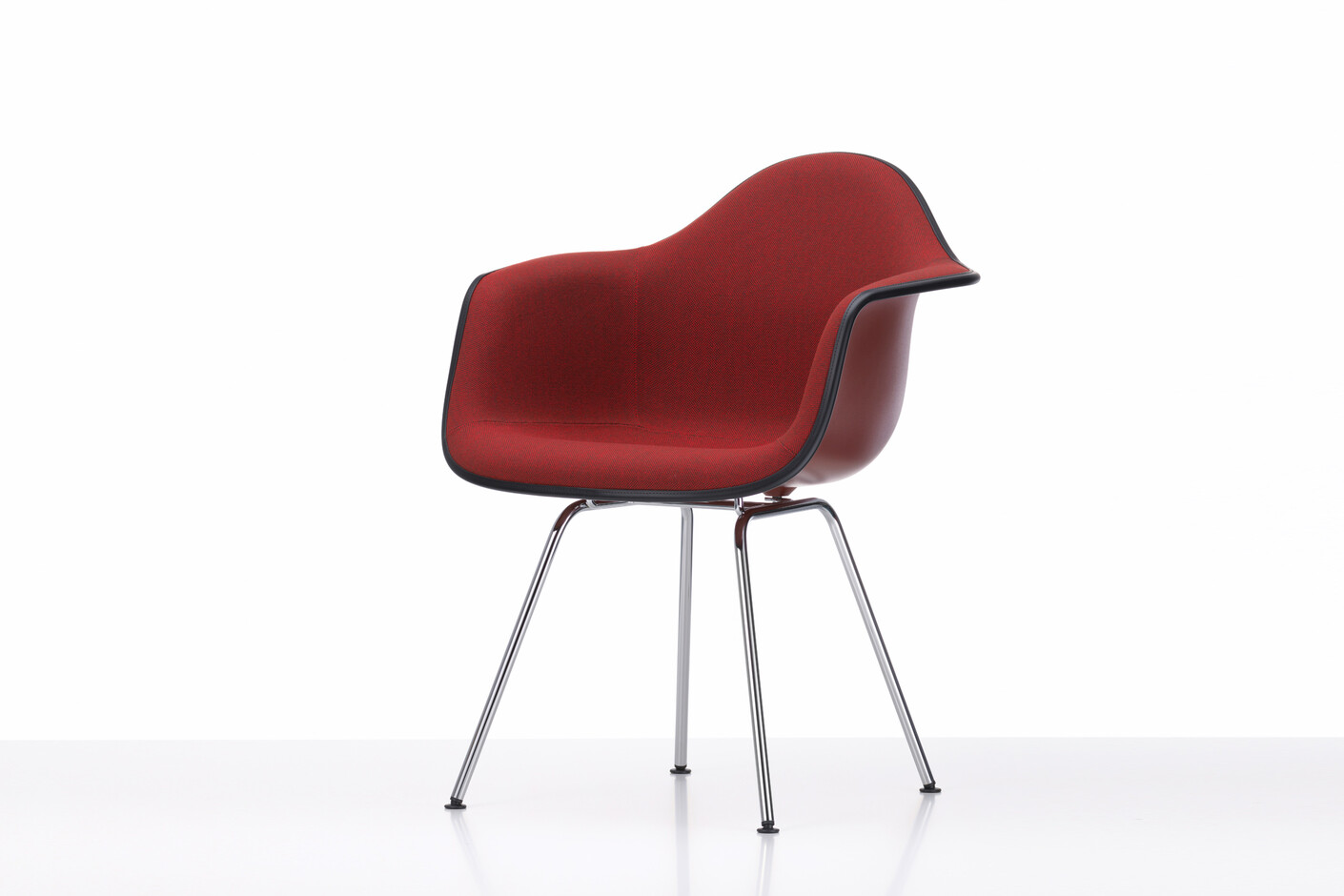 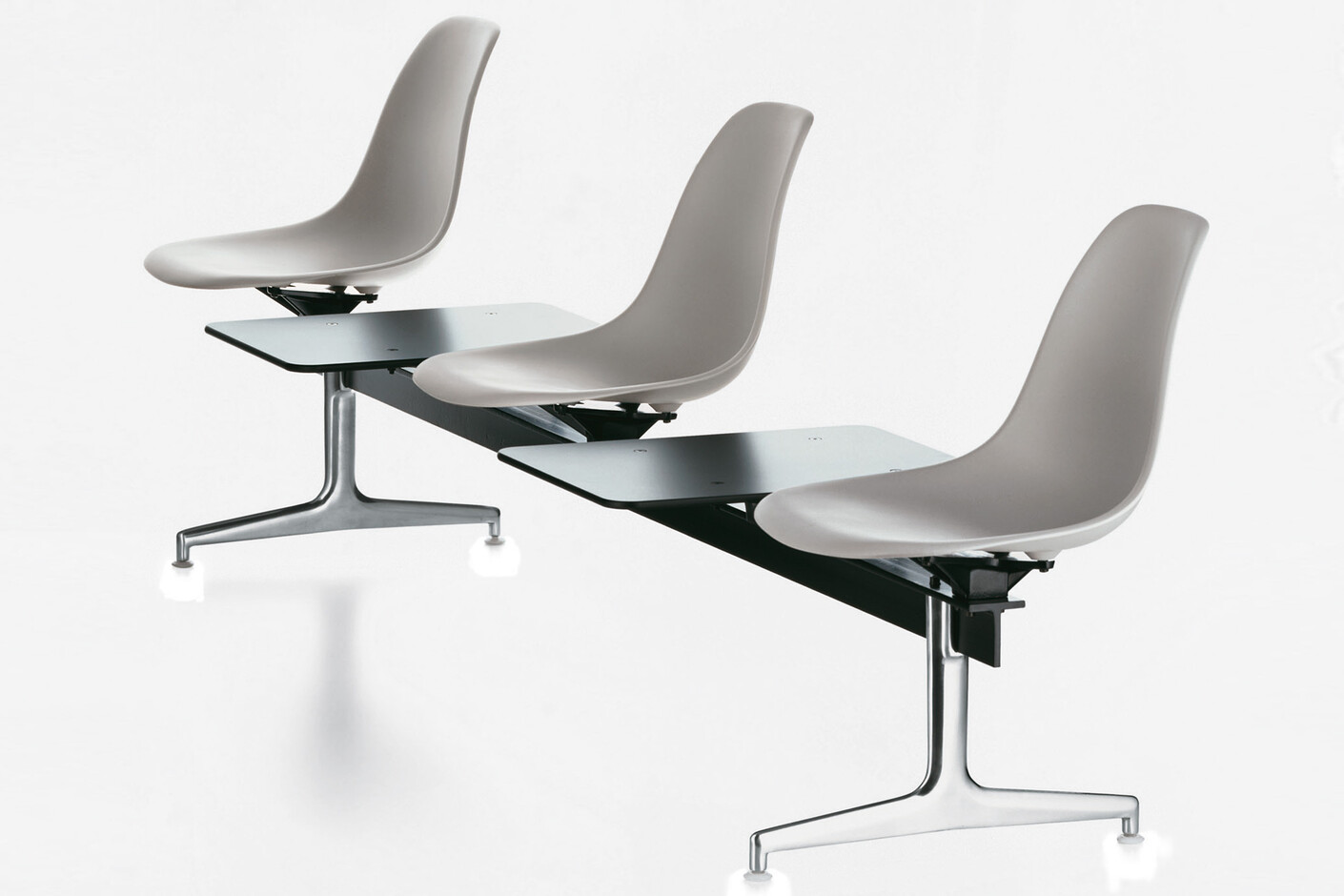